The Epomaker TH96 may just be the best keyboard Epomaker has released since the GK68XS in 2020. It was built with a focus on delivering a great, comfortable, and satisfying typing experience, and the team of designers has succeeded. You might say those goals are the same for any keyboard, but as you’ll see in this review, the Epomaker team has gone above and beyond to make this the custom keyboard you don’t actually have to customize. Let’s dive in.

The Epomaker TH96 is a 96% mechanical keyboard with custom switches, a compact full-size design, full programmability, and a large-and-in-charge volume wheel. The keyboard is also available without the volume wheel and instead has two extra buttons. That version is the TH98. No matter which you get, you’ll have a full number pad, arrow keys, and function row. That 96% monicker indicates that it’s not quite full-size. The editing and navigation cluster has been removed and the Numpad shifted next to the typing keys. Most of the buttons are still available, except for Insert, Scroll Lock, Pause, and Print Screen, but others like Page Up, Page Down, and Delete have dedicated keys. Home and End are accessible through the number pad. 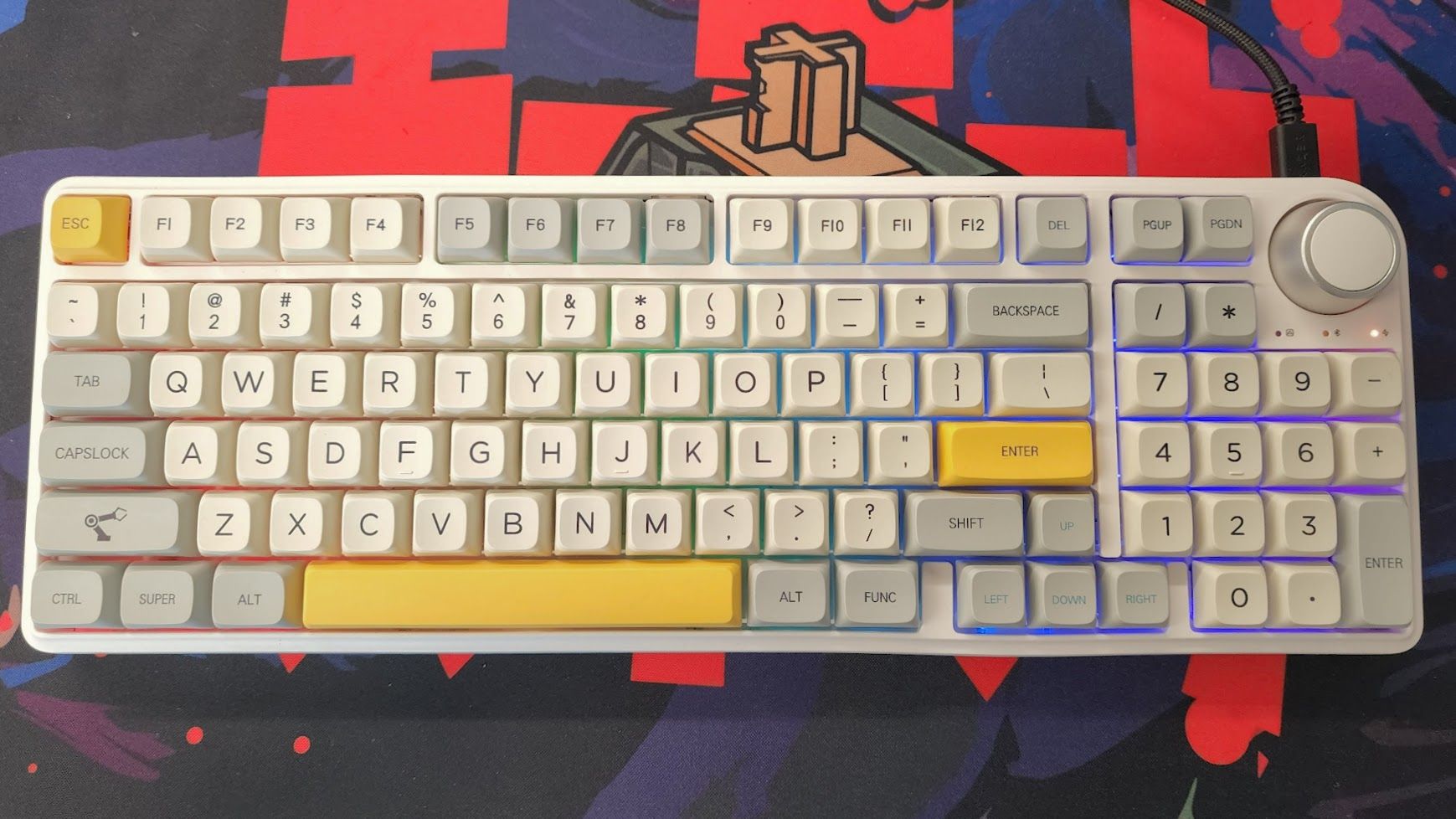 This keyboard takes major influence from the custom keyboard community. It’s made entirely of plastic, which is in line with its price, but inside its shell, there is a lot going on.

The TH96 uses a gasket mounted design. Instead of having the plate and switches screw directly to the top or bottom half of the case, the plate is rimmed with tabs covered in silicone. This deadens out vibrations and gives typing a lighter sound profile. There isn’t much flex at all when typing, but the keys feel soft due to this bumper layer between the cases. 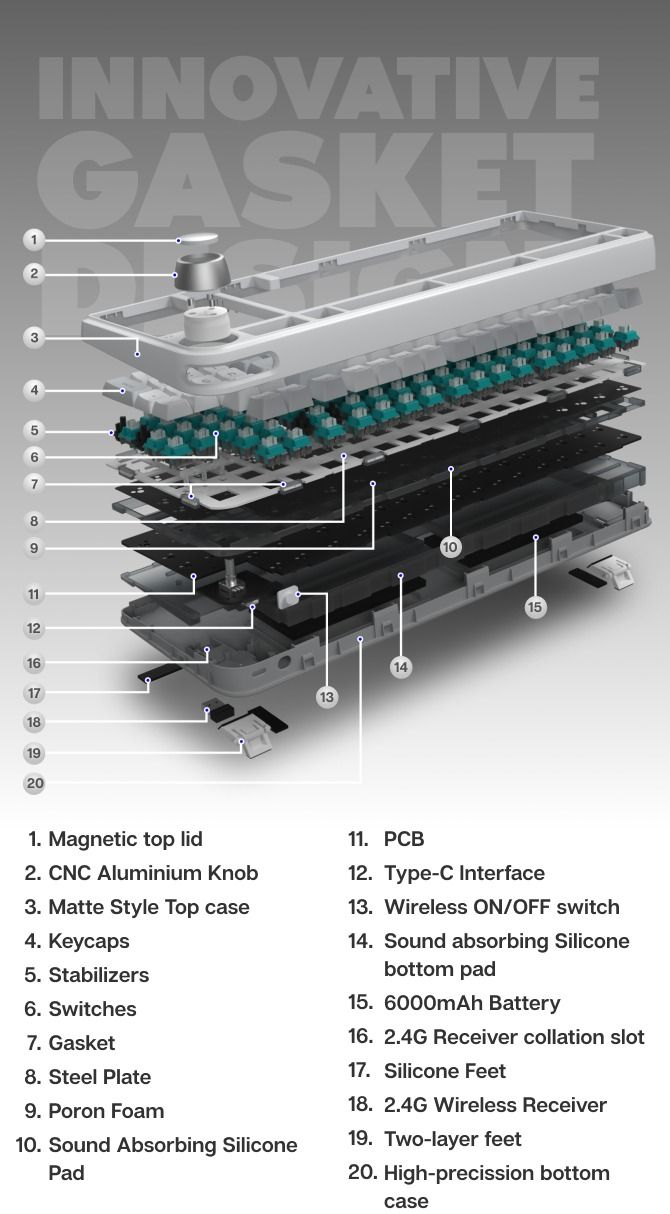 The case is also packed with additional dampening and sound tuning material. Take a look at the image above for an exploded view that highlights everything that goes into it. The plate is steel and has a layer of silicone between it and the PCB to isolate typing sounds. Between the switches and PCB, there is a PORON foam sheet, which modifies the typing sound to add a bit more pop. Beneath the PCB in the bottom half of the case is a thick sheet of silicone to remove any hollowness.

Epomaker’s approach to tuning the sound and feel of the keyboard is impressive. These are features typically reserved for DIY custom keyboard kits and boutique premades, like the Meletrix Zoom65. The premade world is slow to respond, but Epomaker is nothing if not responsive and we can see the results of that here in the TH96/98. The keyboard absolutely sounds and feels better than most other premades in its price category.

The TH96/98 is also one of the very first from Epomaker to support QMK and VIA for programming. This is something the community has been asking after for years and it’s tremendous to finally see it coming out in this TH line-up. You’ll need to order the right version, however, as the Wireless model only supports Epomaker’s proprietary software. That functionality adds $30 to the base cost, but if you want firmware level programmability so you don’t need to run software at all, it’s well worth paying extra for. 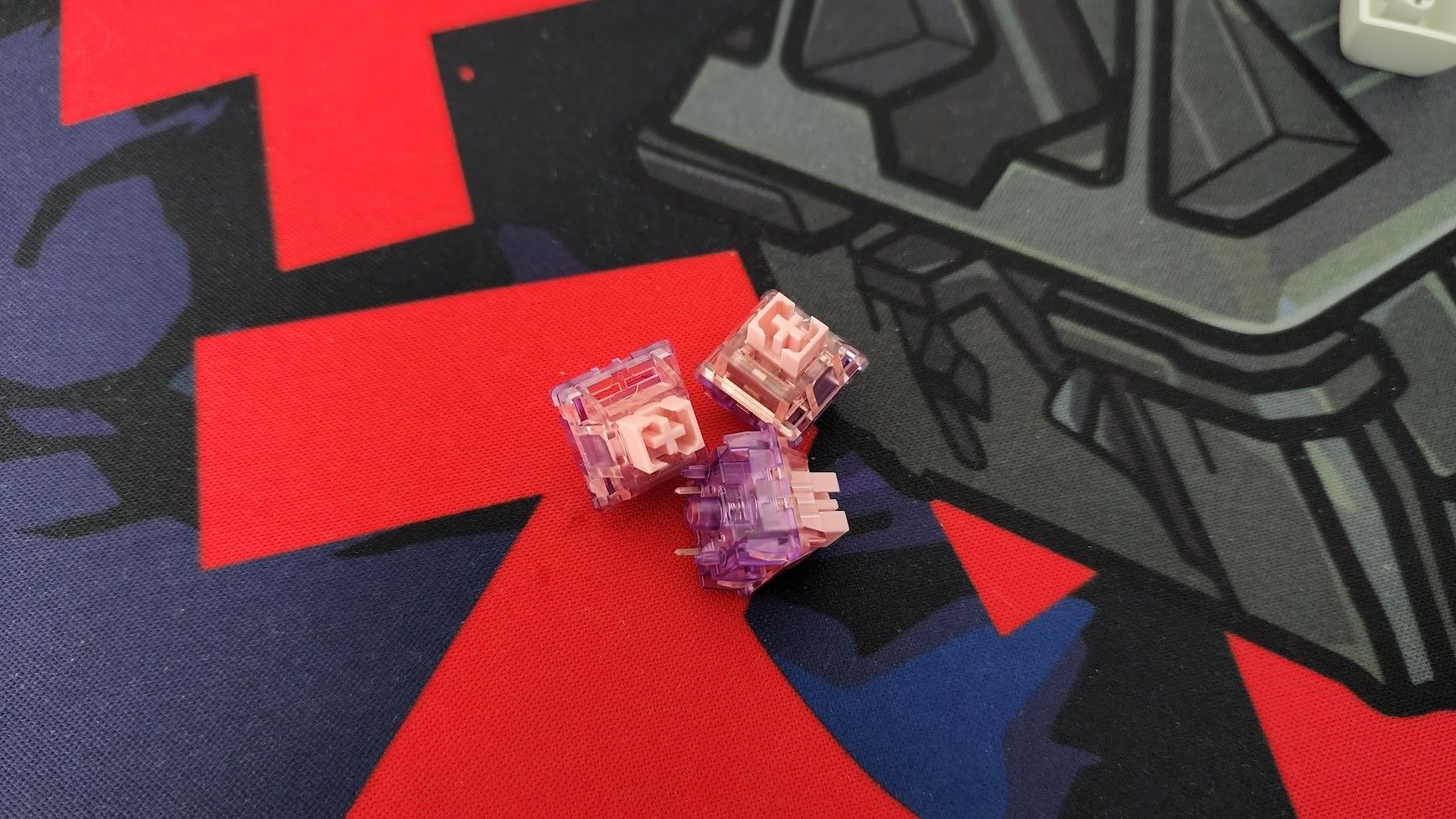 The TH96 comes stock with custom switches and keycaps, though both are easily replaceable. The switches are Epomaker’s lightweight Flamingo linears, which come factory lubed and have a consistently smooth key press all the way to the bottom of their travel and a 35-gram actuation force. I was worried they would be too light, but that force jumps to 45 grams to bottom out, which is the same as Cherry MX Reds. The lube job is good, so there’s no need to lube these again to have a smooth and great-sounding typing experience.

If you do care to change the switches, it’s very easy to do. The TH96 uses hot-swappable switch sockets, so you won’t need to worry about soldering or desoldering anything. You simply use the included switch/keycap puller and unplug the old switches before pressing the new ones into place. The keyboard supports three and five-pin switches. 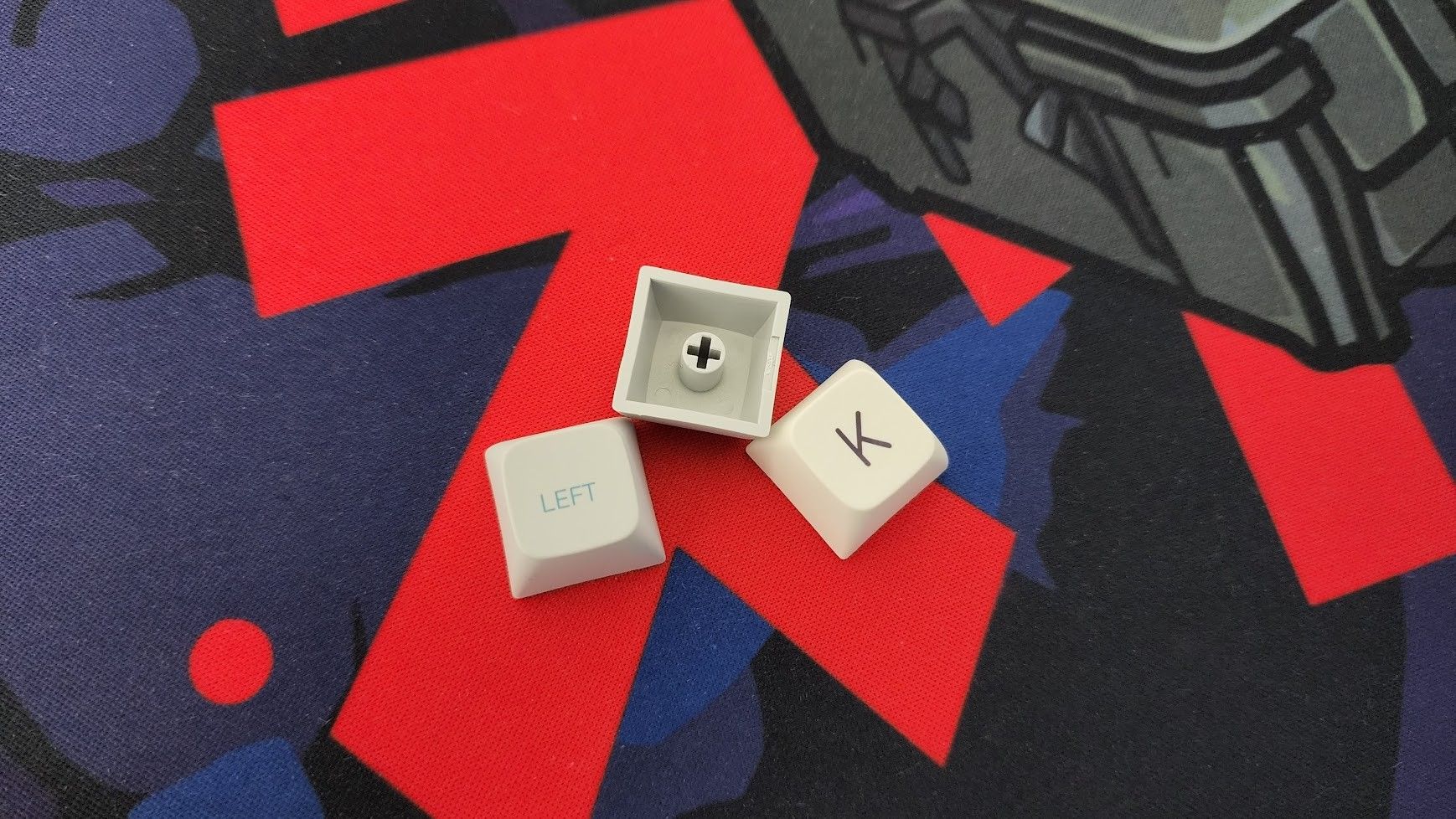 The keycaps are thick-walled, dye-sublimated PBT and are available in MDA and MDA V2 profiles. PBT is the preferred plastic for durability, as the material is more dense and resistant to chipping, fading, or shining over time. The profile choices are very similar to one another. Both are sculpted in the form of vintage SA keycaps but have the height similar to Cherry profile keycaps, making them more comfortable to use. The surfaces are smooth to the touch instead of textured, so there is a unique feel to the TH96. The material and exceptional thickness of these keycaps also gives them a lower pitched sound when typed upon quickly.

Should you change these out to give your keyboard a facelift, you’ll be free to use whatever MX-compatible keycap set you like. The switches are all south facing, which means there won’t be interference with Cherry profile keycaps. This does position the LED at the bottom of the switch, however, which isn’t good for keycaps with backlit legends. 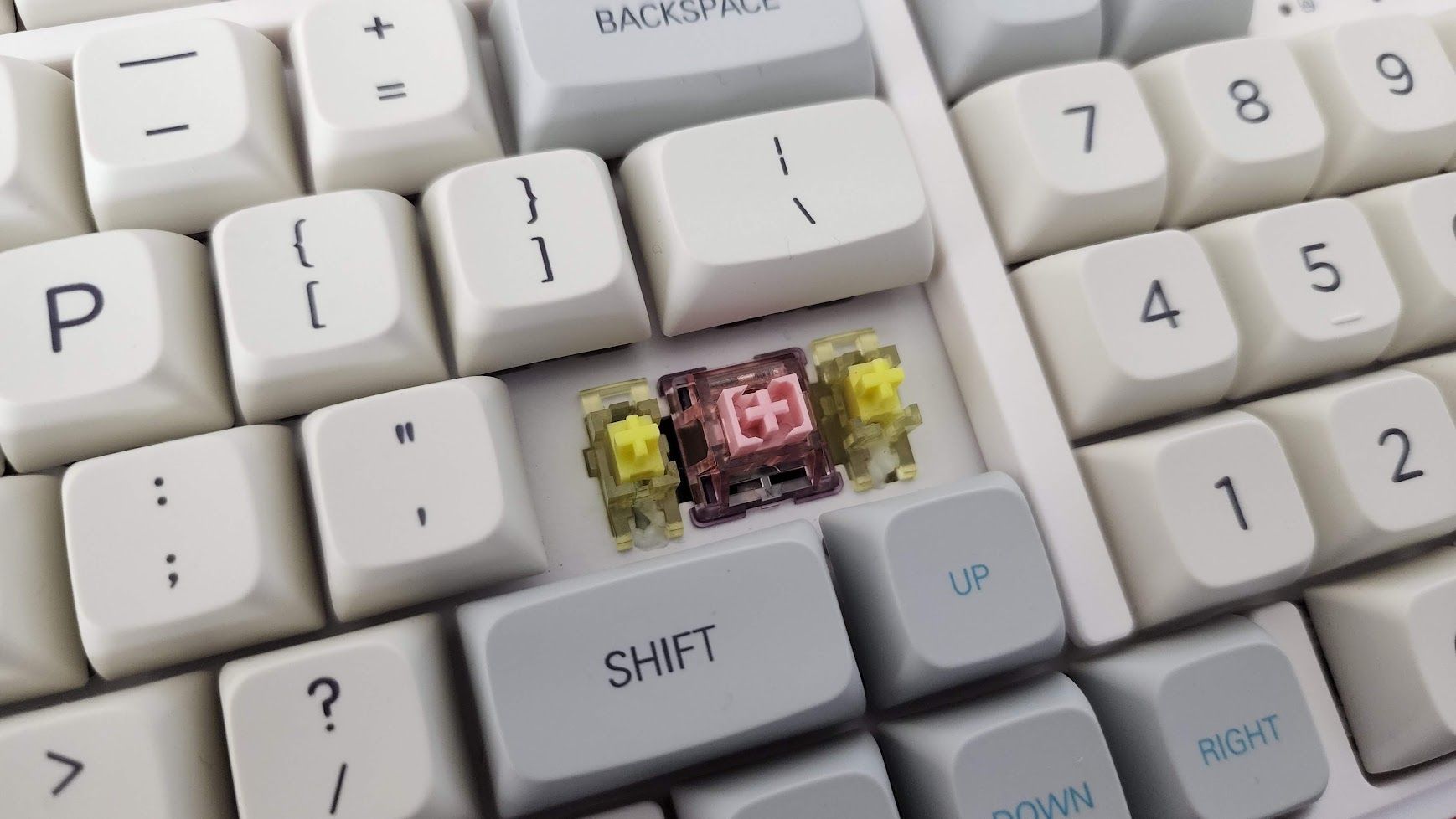 If you opt for the wireless version, the TH96 will actually support three connection modes: Wired, 2.4GHz, and Bluetooth 5.0. Swapping between these modes and wirelessly connected is easy and reliable. Quick FN combinations swap devices, and the delay when switching is minimal. I found swapping between 2.4GHz and Bluetooth to be consistently fast with only a few seconds of delay between changes.

Finally, before moving into the typing experience section, it’s worth talking about programmability. The TH96/98 can be completely remapped, assigned easy to record macros, and moved between lighting schemes on the fly. You can change lighting presets using key combinations (there are 18 presets to choose from), but other programming needs to be done with Epomaker’s software suite. It’s far better than it used to be and is less complicated when it comes to remapping keys and recording/assigning macros, but it is clearly still being developed. Don’t go in expecting Razer levels of polish, but expect it to be much improved from Epo’s keyboards even one year ago.

With that background out of the way, I have to say that the TH96 has been one of my biggest surprises this year. It’s not a perfect keyboard, but the typing experience really is excellent. The keys feel soft due to all of the dampening material and the gasket mount implementation, and there’s a delightful poppiness out of the box that is enhanced further if you apply your own tape mod to the PCB (which is fast, easy, and cheap).

The materials and switches used also play to the strengths of the plastic case. Aluminum is the preferred material for many custom keyboards, but plastic still has its place even in enthusiast circles. Here, the use of plastic really rounds out the typing sounds. There’s nothing sharp to the ear, and it’s really rather delightful to listen to when typing. 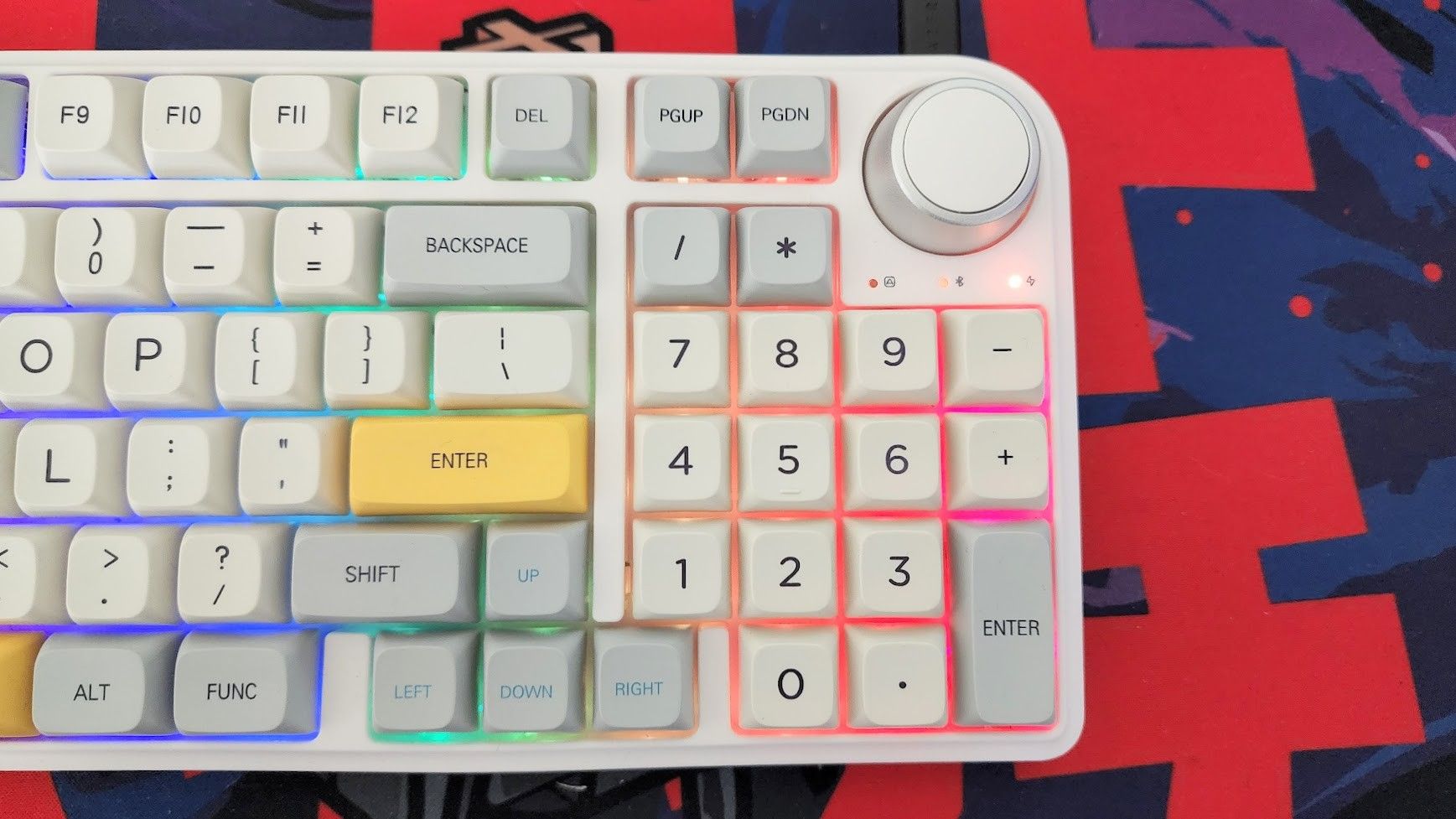 Of course, a lot of the sound and feel of any keyboard is with the switches used. The Flamingo switches use POM plastic for the stem and polycarbonate for the housing. They have a higher-pitched, lightweight typing sound that matches very well with the rest of the keyboard.

At 35 grams to actuate and factory lubed for exceptional smoothness, the Flamingo switches are excellent for gaming. I played World of Warcraft, Doom Eternal, and Battlefield 2042. Their linear design makes sending rapid key presses almost effortless. Be prepared for a slight learning curve due to their lighter actuation force, but these are very good switches right out of the box.

The stabilizers are also good. They come factory lubed, though this was a bit more inconsistent. Since they’re plate mounted, adding more lube yourself is easy, but you could also use them out of the box if you don’t care about a little rattle on the longer keys. 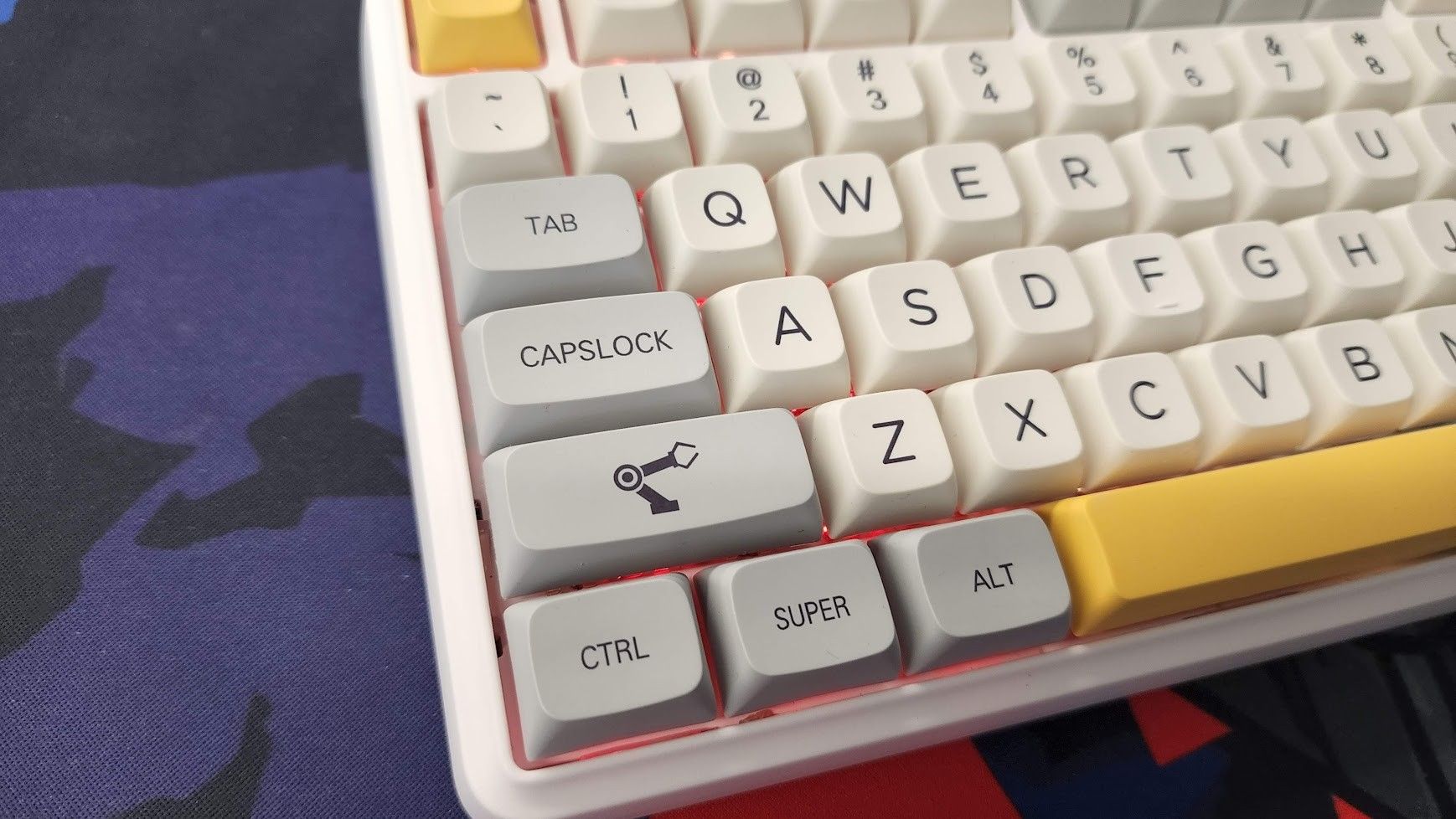 One issue I have is with the look of both available keycaps sets. The white version takes clear inspiration from Rama Works’ Heavy Industry but uses a Steam-like arm on the left shift that looks off to me. The black version uses a darker keycap set but opts for futuristic, almost sci-fi-inspired legends. I would really like to see Epomaker use a unique keycap set design that leans into colors instead of legends and graphics quite so much. 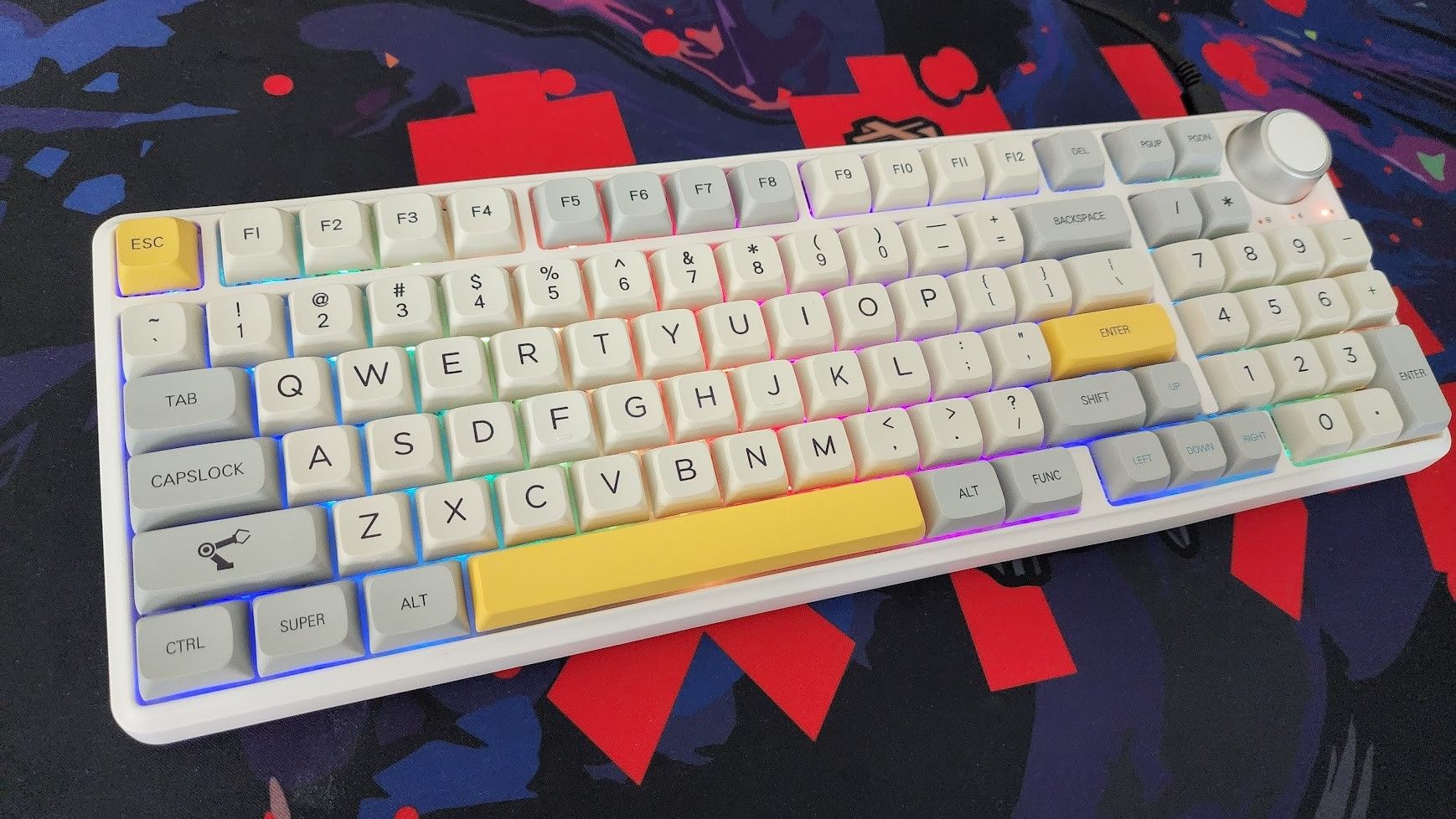 At the end of the day, the Epomaker TH96 has won me over with its typing experience. The internal design, switches, and plastic case all work so well together, that it becomes something better than the sum of its parts. I also have to give Epomaker big kudos for listening to the community so well: gasket mounting, plentiful dampening, south facing switches, and QMK support are all included hear because Epomaker actually listened to what its customer wanted now and was reactive enough to deliver it. $179 for the QMK version does feel slightly high, but $129/$159 for the early bird price is very fair and makes this a solid choice for typing and gaming.

Click here to visit the Epomaker TH96’s Kickstarter Page and find out more.