It’s an exciting time to be a keyboard shopper. There are more and better options than any time in recent memory, and the increased competition just keeps driving prices lower and availability higher. That’s definitely the case today with the new Epomaker Theory line of mechanical keyboards. Featuring hot-swappable, pre-lubed Gateron Pro switches, quiet stabilizers, and a design that emphasizes sound quality and bang for the buck, they’re a high value line any new buyer should consider. We’ve been testing the TH66 and TH80 for the last two weeks and are ready to render a verdict on how well they stand up at their exceptionally affordable prices. What, if anything, is being sacrificed here?

Epomaker has been one of the more exciting brands to launch over the last few years. We began our coverage of the brand with the GK68XS just shy of two years ago, and the brand has had many releases since. All of them have had a similar design ethos: enthusiast features at a discount. So far, they’ve been successful, and that same approach certainly carries through with this latest release.  What’s different this time is that the market is significantly richer with entry-level options for budding keyboard hobbyists and gamers. 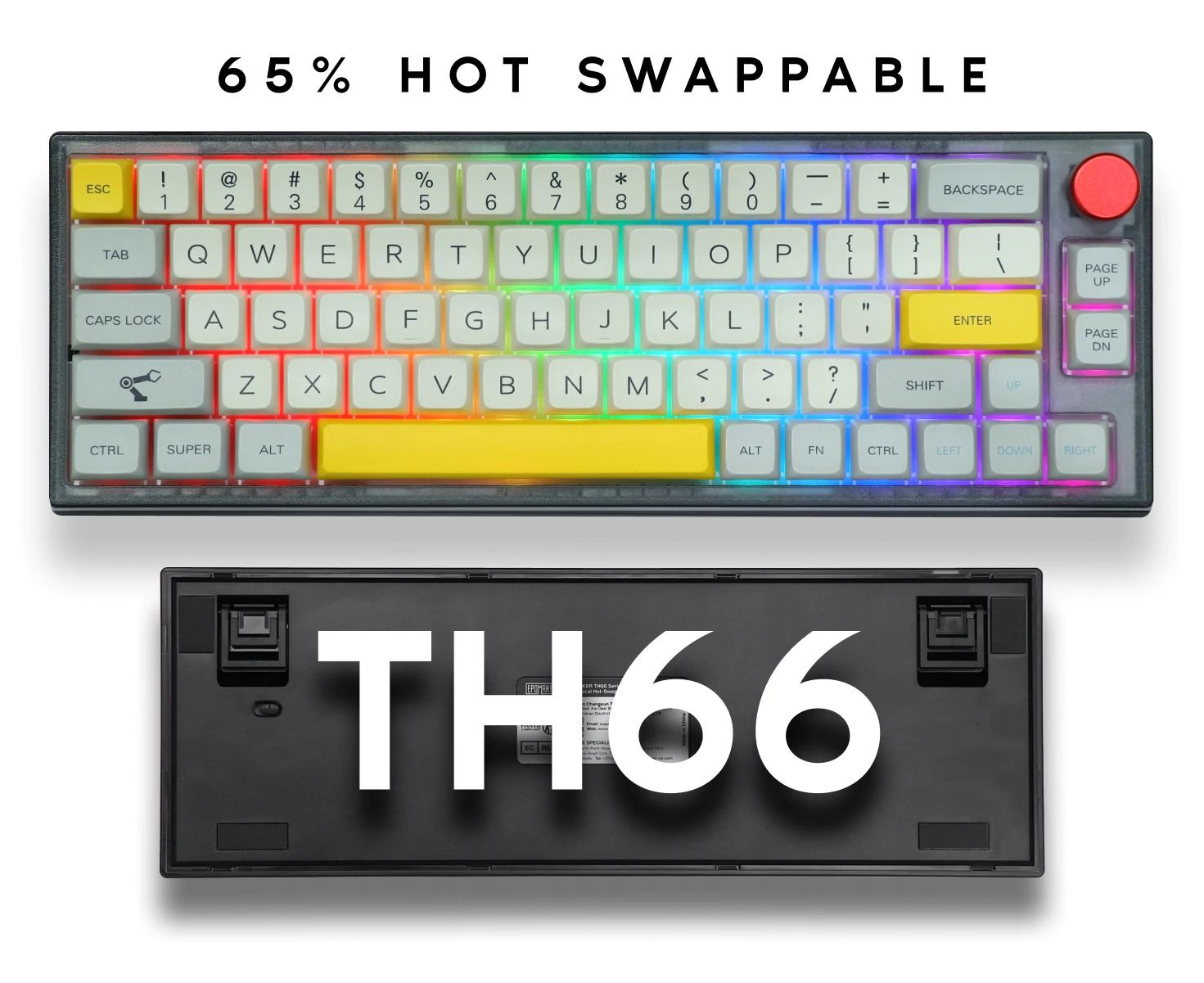 So, let’s take a closer look at what these keyboards have to offer. The Theory line-up, TH for short, comes in 65%, 75%, and 96% layouts. Each board features hot-swappable Gateron Pro switches, pre-lubed from the factory. Each is built with a plastic case, and includes a layer of plate foam between the plate and PCB, and a second layer of foam inside the case to reduce hollowness. The keycaps are dye-sublimated PBT in a gray and yellow color scheme that looks pretty nice. Each is also available as a barebones kit if you would like to bring your own switches and keycaps and is $20 off if bought that way — but spend the extra $20 and pick up the set of Gateron Pros. They’re smooth and quite nice to use; put Cherry’s to shame.

These boards are built with a “modified gasket-like structure.” Here is what Epomaker has to say about that:

It adopts the gaskets on the edges of the bottom case as the main contact point, which is to bring soft tactile feelings and quieter sounds. Meanwhile, a few screws are used to secure the plate and the PCB to eliminate the common complaint of using a traditional gasket mounting keyboard - lacking support in the central typing area and instability when typing hard.

In actuality, the keyboards are tray mount, which means the plate/PCB assembly screws into posts built into the bottom case, but use a series of silicone stripes where the PCB meets the top and bottom case. What this means for typing is that keystrokes are dampened and quite nice-sounding. There isn’t much flex to speak off, so you’re not getting the “bouncy” typing feel that’s typical to full gasket-mounted keyboards. Instead, it’s about isolating those vibrations so you’re hearing less of the case and more of your switches.

All of the keyboards also feature triple-mode connectivity. You can connect with a wired connection, over bluetooth (three profiles that can be swapped on the fly), and 2.4GHz for wired-like gaming performance.  Oddly, the battery capacity is different between all three models. The smallest keyboard features the smallest battery at 2200mAh, the TH80 features the biggest (3800mAh), and the largest of the bunch falls in the middle at 3000mAh. There isn’t a quoted battery life, but you can see a battery indicator using one of the switch LEDs to know where you need a charge. I found that with a few hours a day at full RGB brightness, I had to recharge about once every 4-5 days. 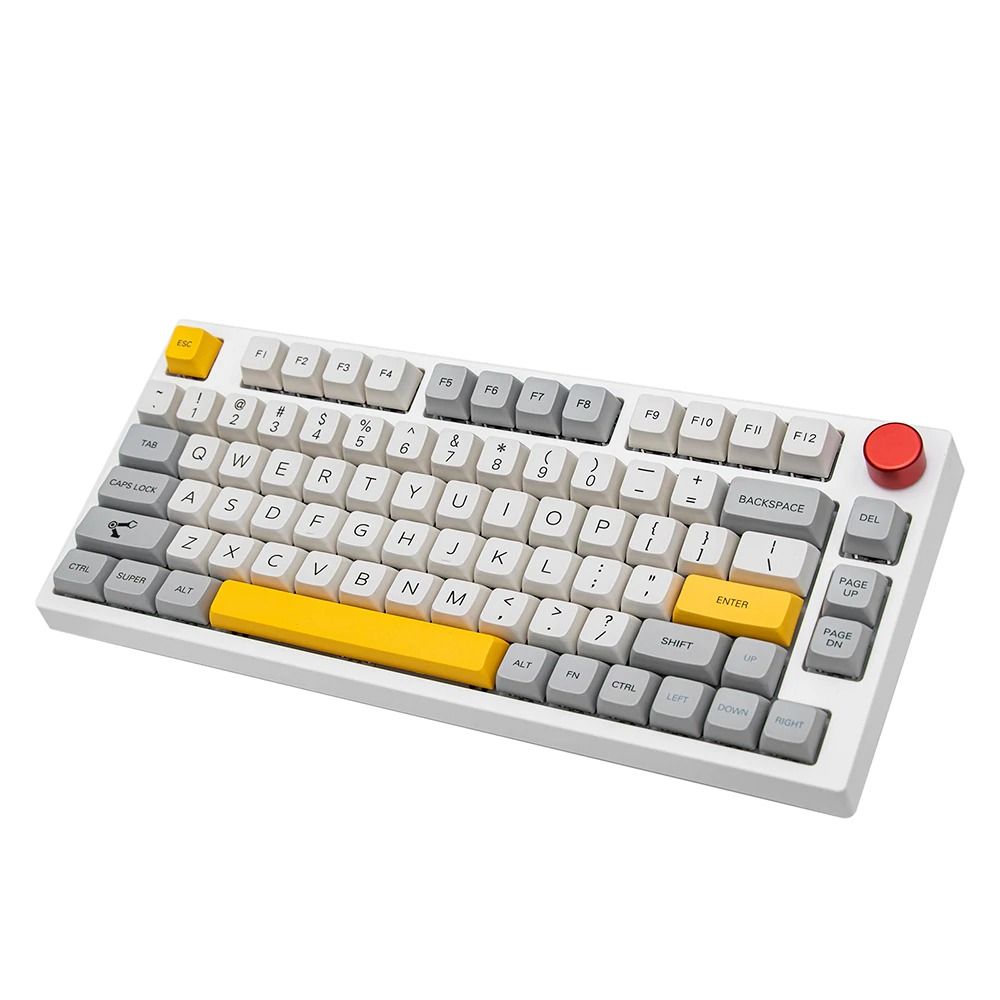 Both of the smaller models also come with aluminum rotary knobs to control volume. In truth, the TH80 seems to be a “plastic GMMK Pro” on the surface because of it. Of course, it’s not a true gasket mount implementation, but the GMMK Pro’s thin gaskets made it nearly as firm anyway. The Theory keyboards also do not support screw-in stabilizers, which means enthusiast favorites like Durock V2s are out of the question. The included stabs aren’t terrible, and can actually sound pretty good with proper lubing. More on that in the Performance section.

These keyboards are also fully programmable using Epomaker’s software suite. It’s rough around the edges, as it has always been, and is certainly not the most intuitive to use. As a keyboard that’s aiming at budding enthusiasts, it would have been nice to see QMK support added to this new line-up, but alas, it’s still missing. Still, the software gets the job done, and once you’re programmed you won’t need to fuss with it again unless you’re planning on making changes.

With that out of the way, let’s get into how these keyboards actually perform. It’s… not bad. The sound and feel are surprisingly good actually. The layers of foam, plastic case, silicone strips and pre-lubed switches all work together to create a typing feel that is exceptionally smooth and a sound that is well dampened and pleasant. I like it quite a bit, actually!

But, like most of these entry-level keyboards, they’re best viewed as a platform to improve upon. With some easy mods, you can make these keyboards sound and feel much better, and you won’t even need to crack open any switches to do it! 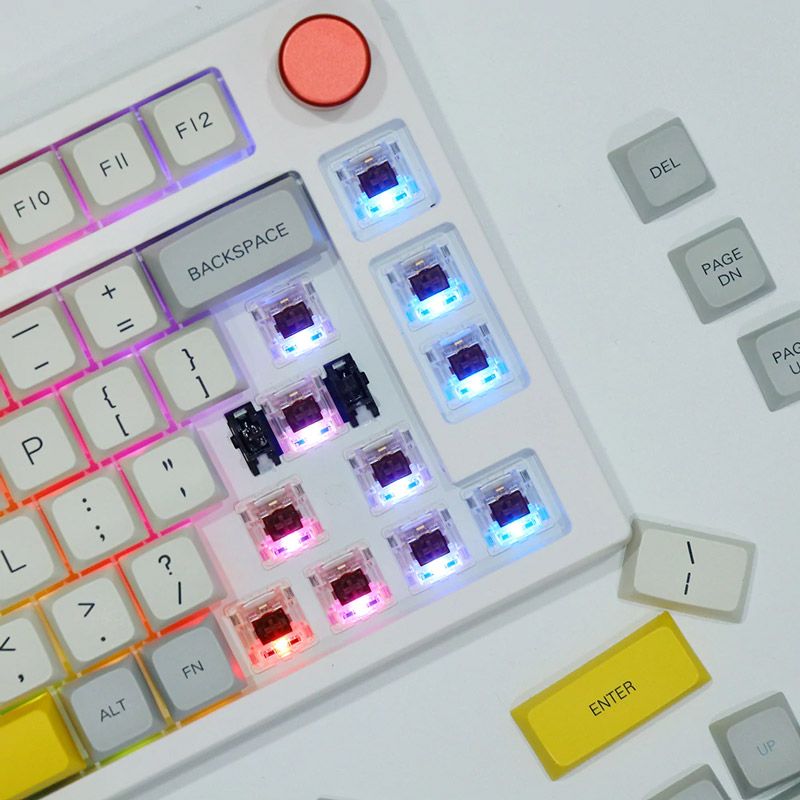 On that note, I was happy to see Epomaker use Gateron Pro switches. The TH80 I was sent used Pro Black switches, which are medium weight linears. The TH66 used Gateron Pro Red switches, which are lightweight linears. The lube job on these is noticeable right away. They glide like they’re on air, have no spring ping whatsoever, and sound pretty good for a budget switch you can just plug in and have a good experience with. I certainly hope Cherry is taking notes here, because Gateron is handing them their lunch. 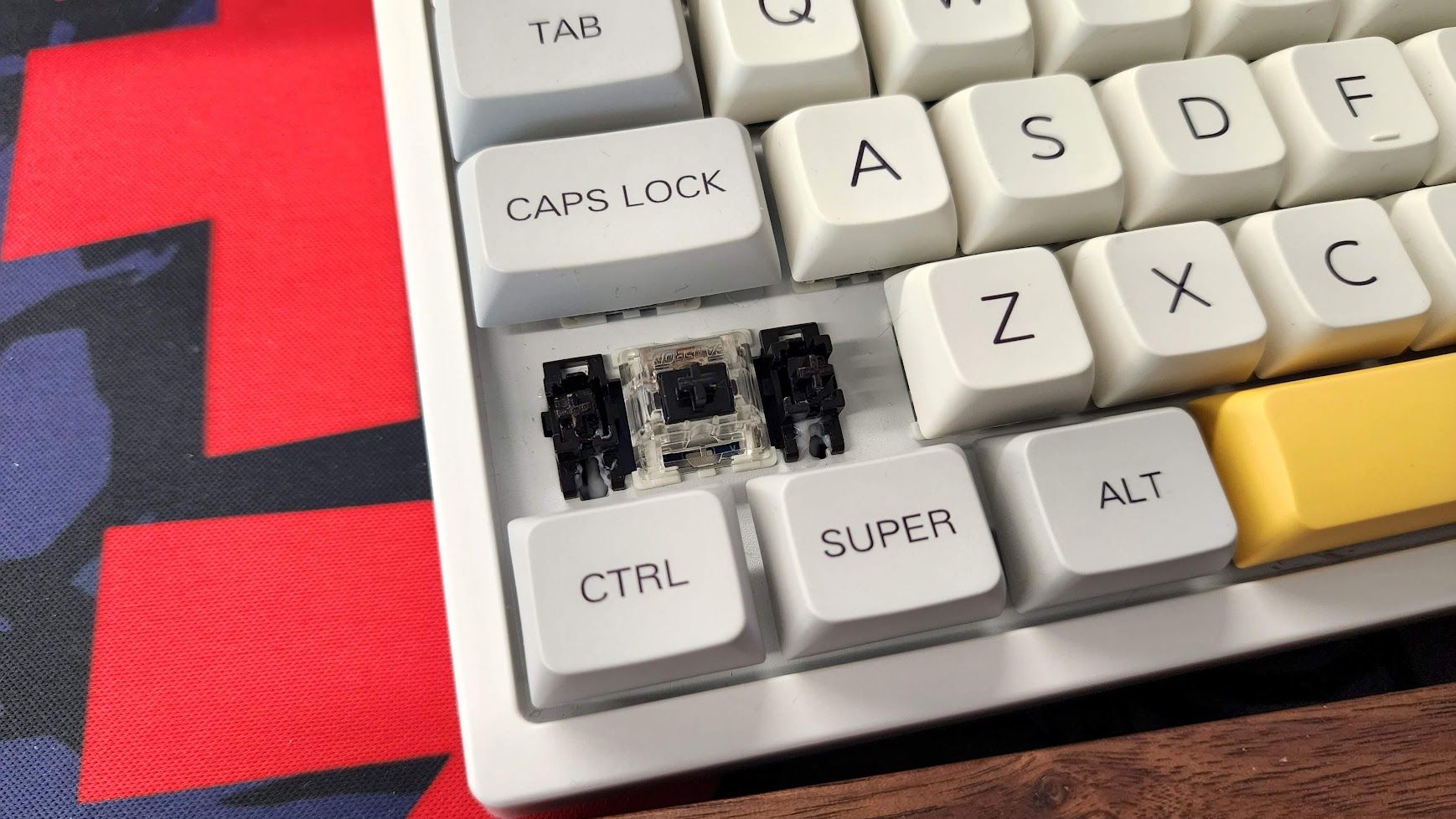 The stabilizers in these keyboards come generously pre-lubed, but like most pre-lubed stabilizers, it’s globbed on the outside of the housing with very little inside where the rattle comes from. On both boards, I had stabilizers with some rattle left over and others that were fine. Thankfully, they’re easy to pop out, add a little more to, and then they’re good to go. These stabilizers aren’t going to blow you away, but they’re pretty decent and perform better than the majority of gaming keyboards out there today in how they sound.

The silicone pads do the job of dampening, but it’s not as good as it might be because there are still posts in the center of the bottom case. These transfer vibrations right down and lead to a firmer typing experience. On the product page, Epomaker says it uses these posts to “eliminate the common complaint” of “lacking support in the central typing area and instability when typing hard.” I don’t know about that. In fact, I think flex is a pretty easy to point to selling point for a lot of custom keyboards. But, different designs, and they dampen the keystrokes, so it’s still better than a plastic tray mount. 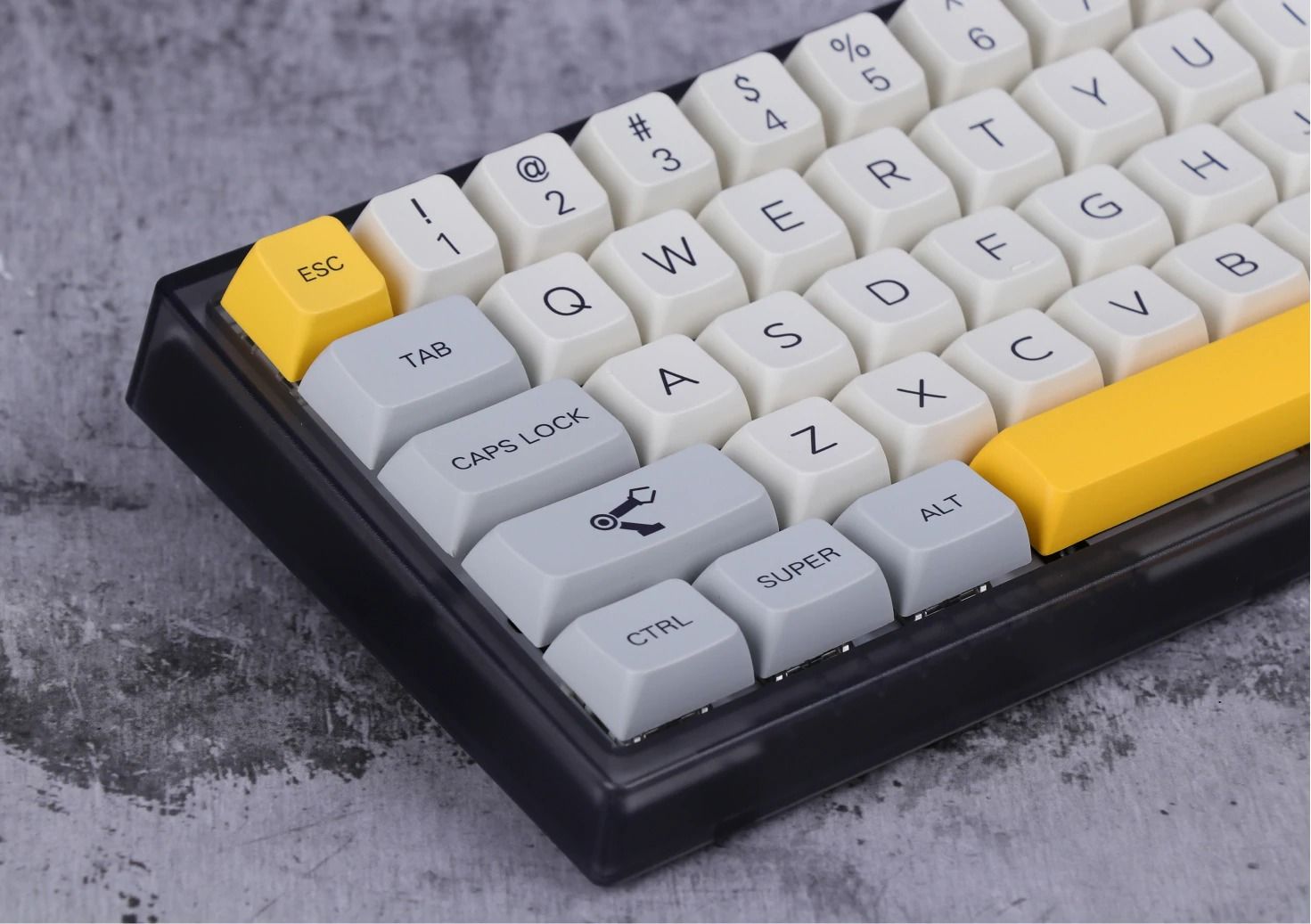 The sound of both keyboards is pretty lightweight to start. At this point in my keyboard career, I prefer a deeper sound that’s also a bit louder than many silicone/foam dampened keyboards provide out of the box. To enhance the sound, I added two layers of painter’s tape to the back of the PCB. Both boards responded very well to it, coming out with more depth and pop to the acoustics without sounding muffled. I would definitely recommend potential buyers give this a try. Easy, cheap, and a noticeable upgrade!

For gaming, the keyboards performed great. I wasn’t able to tell a difference in responsiveness between being connected over a wire and using the 2.4GHz dongle, so you can safely unplug without fear of wireless lag. The software also gives you the ability to record macros and create multiple layers of keymaps for different games. I wish it were more refined, but it’s usable and not too difficult once you get used to it, which makes these effective keyboards for PC gaming. 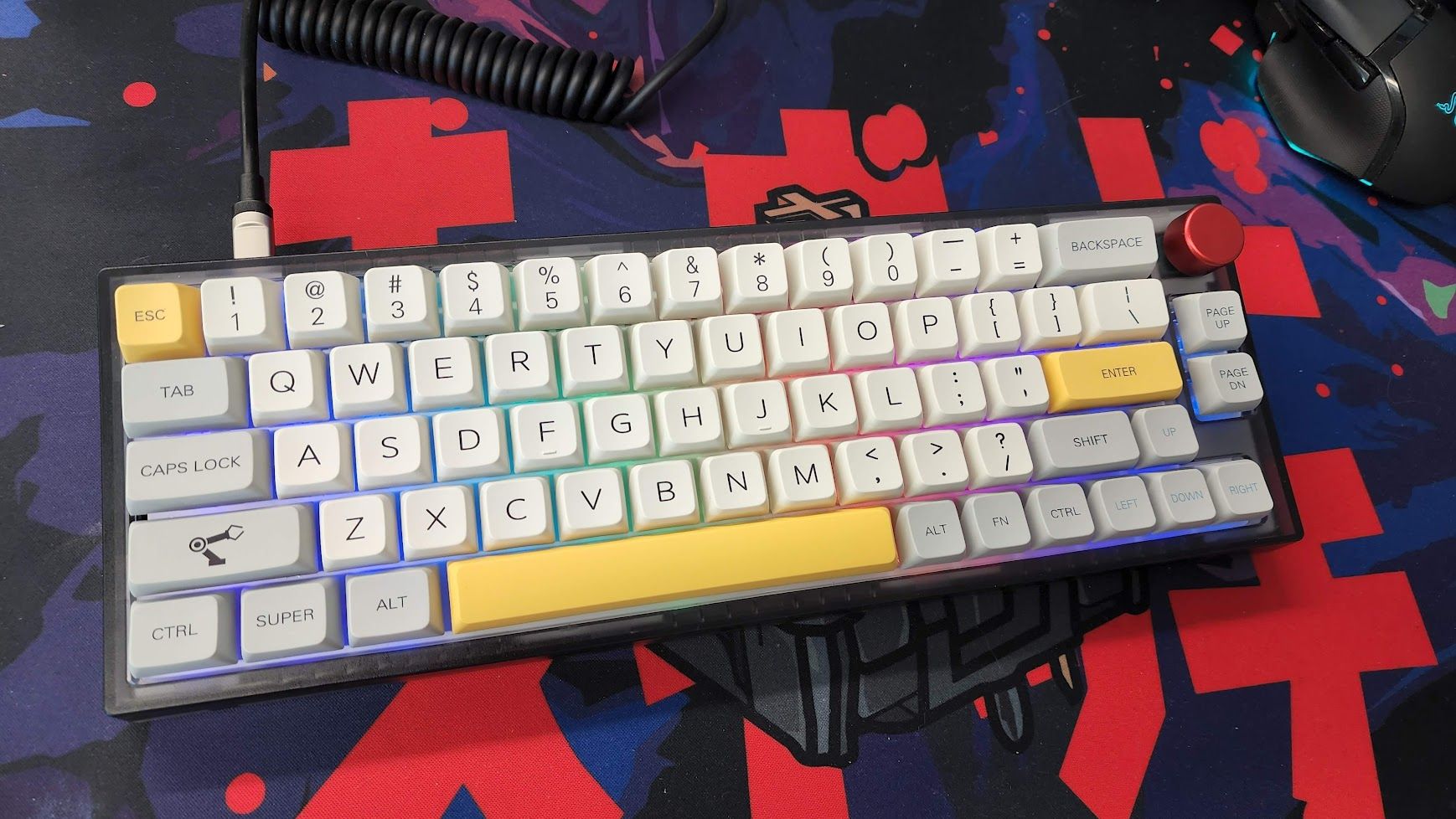 With prices ranging from $89 to $109, these keyboards deliver a lot for the money. If you’re sensitive to stabilizer rattle, you may want to go back and add a bit more grease, but the out of the box experience is good. It’s clear that Epomaker is stepping up its game on what kind of typing and gaming experience you can expect for the money, and that’s a win for everyone. If you’re looking for a solid platform to build a good sounding, good feeling typing and gaming experience, the Epomaker Theory line is a safe bet.

The product described in this article was provided by the manufacturer for evaluation purposes. Some articles may contain affiliate links and purchases made through this will result in a small commission for the site. Commissions are not directed to the author or related to compensation in any way.
7.5Good
Pros
Cons
Tags
Mechanical Keyboards
Peripherals
Epomaker
Epomaker TH80
Epomaker TH66