Tired of your laptop’s chiclet keyboard? Epomaker thinks it has the answer with its new NT68 wireless keyboard. Designed with travel in mind, it’s made to sit “magically” on top of your laptop’s built-in keyboard, giving you the full mechanical keyboard experience anywhere you go — including full lighting and macro programming. Starting at $89 for Super Early Bird pricing, is this a product worth your hard-earned gaming dollars? 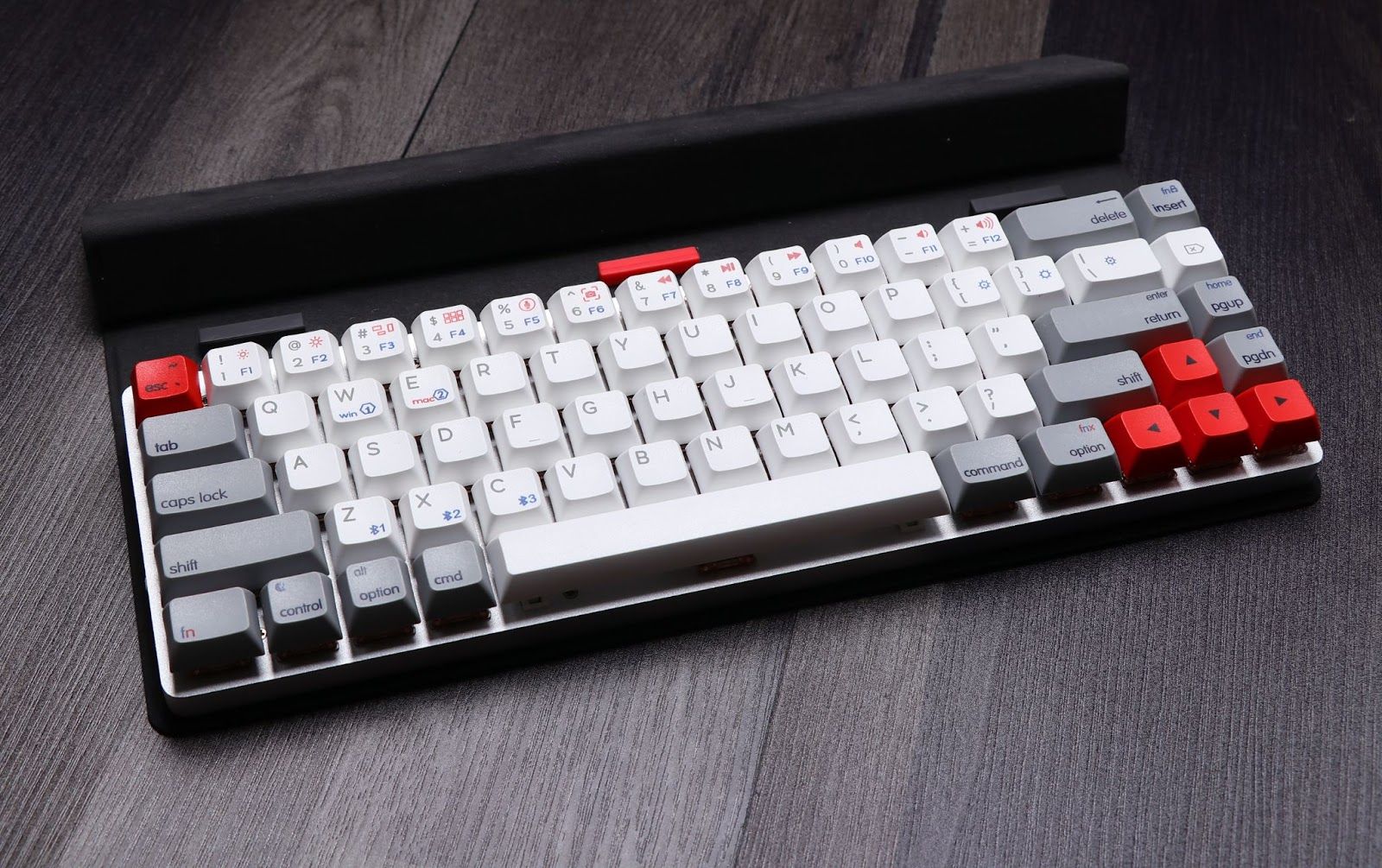 Epomaker has become a familiar name here at MMORPG. We’ve reviewed a number of their keyboards and with rare exception have always found them to be an excellent value for the money. There’s a shared DNA between its boards, often featuring similar color schemes and features with one or two big things that set them apart. That is the NT68 in a nutshell: it carries through the biggest selling points of its older siblings, the GK68XS and GK96S, and packs it into a new portable layout designed to replace your laptop keyboard.

The NT68 is made for travel. It features a low-profile 65-percent layout, removing the function row and navigation and editing cluster, for a compact design that sits atop a thin case of aluminum (top and sides) and plastic (bottom). It’s also available with low-profile switches to thin it down even more. It comes with a folding magnetic case which helps it slide easily into a bag and protects the keycaps from popping off. Just as importantly, the case is able to support a phone or tablet for typing away from a PC over Bluetooth or can fold away to disappear beneath the keyboard and bring it to a more average height if you find it too low. 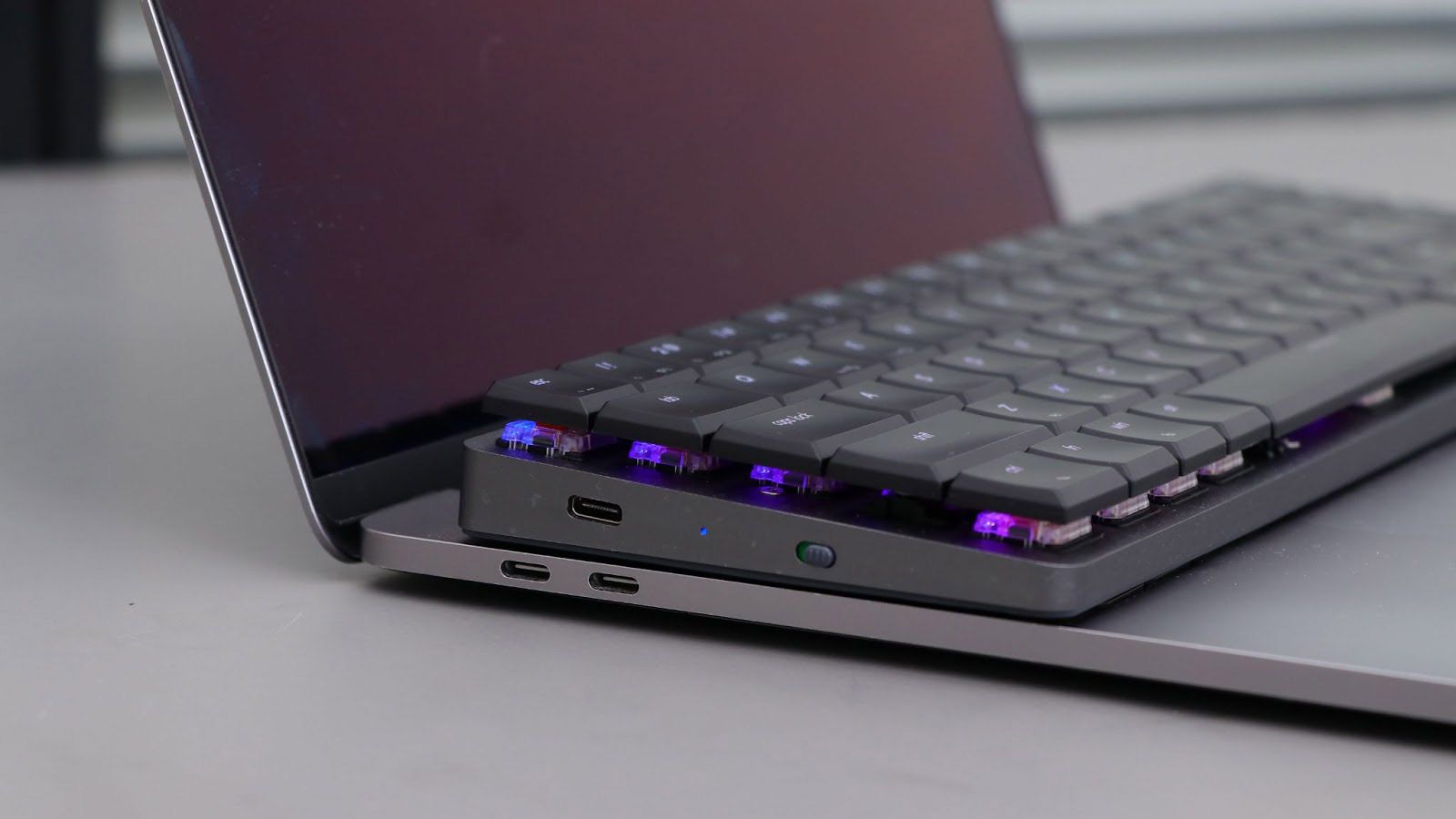 The biggest selling point is its “magic” design. The NT68 is designed to be placed directly atop your laptop’s keyboard. The sizing and position of the rubber bump-on feet are just so to avoid pressing the built-in keys. The USB-C port is also positioned on the left side and the included cable is just long enough to connect without excess length stringing out on your table.

Of course, you can just as easily connect wirelessly over Bluetooth. The keyboard supports three devices and can be hot-swapped between each using a quick Fn+Z, X, or C combination. There is a slight delay of five seconds or so as the keyboard swaps devices, but once it’s paired it remembers the connection and holds it reliably.

If Epomaker’s marketing is any indication, it’s definitely hoping to win over Mac users with the new design. The keyboard comes with alternate keycaps to match the MacOS layout and the function row features identical shortcuts to your common MacBook. The keyboard still functions perfectly on Windows and can be quickly swapped between Mac and Windows layouts with Fn+W and Fn+E.

This functionality, however, is identical to past Epomaker keyboards, and it’s not the only thing. We see the return of the brand’s excellent dye-sublimated PBT keycaps. They’re made in Epo’s GK profile, which is reminiscent of SA in their rounded shape but are much shorter and easier to type on. The caps have crisp legends and thick walls for a solid, satisfying typing experience and the assurance that these keycaps won’t shine with extended use. 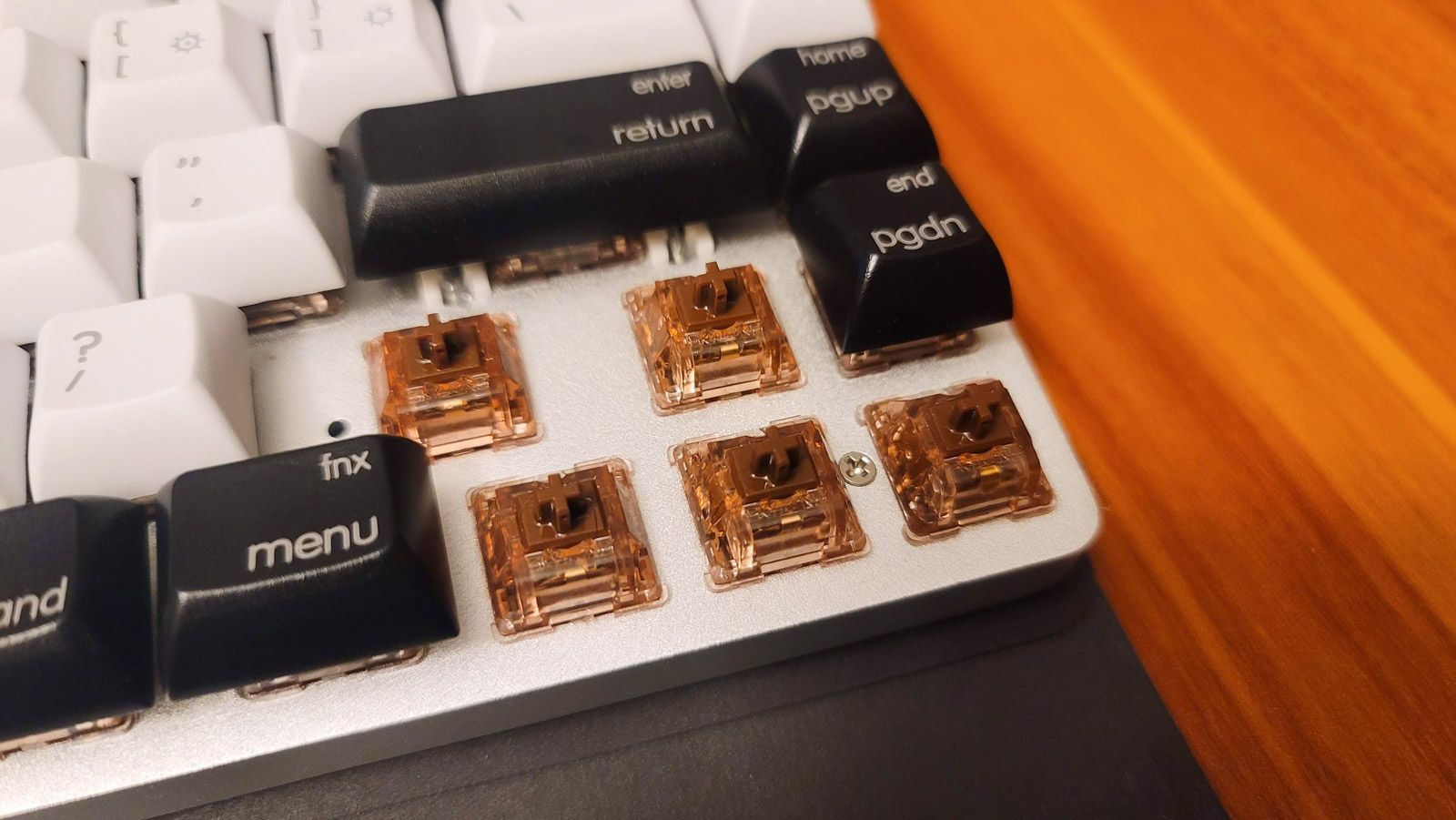 Underneath those keycaps, you’ll have your choice of Gateron switches or Epomaker’s own Chocolate switches. If you would rather swap in your own, you can do so without the need for soldering thanks to the built-in hot-swap sockets. My unit came with Epomaker Chocolates, which are highly tactile but also muted and softer to the touch.

Finally, for gamers and RGB fans, the NT68 supports full programmability. The per-key backlighting is bright and customizable with 16.8 colors for each key. There are more than a dozen preset effects built into the board, however, so you don’t need to spend more than a few minutes to get the board looking great. Nearly every key can be remapped or assigned a macro, and so you don’t lose functionality, it also supports multiple profiles that can also be shifted between with another key combination.

Taken as a normal keyboard — special features aside — the NT68 is impressive for the money. The typing experience is excellent. There isn’t any sense of hollowness to the keyboard. In fact, it feels surprisingly dense, which makes typing feel and sound satisfying. The stabilizers came factory lubed and even felt slightly cushioned, though there was no padding that I could see. Lube application was a bit spotty (my backspace key needed a little extra) but the other keys were decent right out of the box.

I would also recommend any Cherry MX Brown fans to try the Epomaker Chocolates. They are much more tactile and have a cushioned bottom out that doesn’t feel mushy. That cushion has a silencing effect. Even though they’re not labeled as a silent switch, they wind up being that way. I’m usually not a fan of silenced switches but these are surprisingly good. 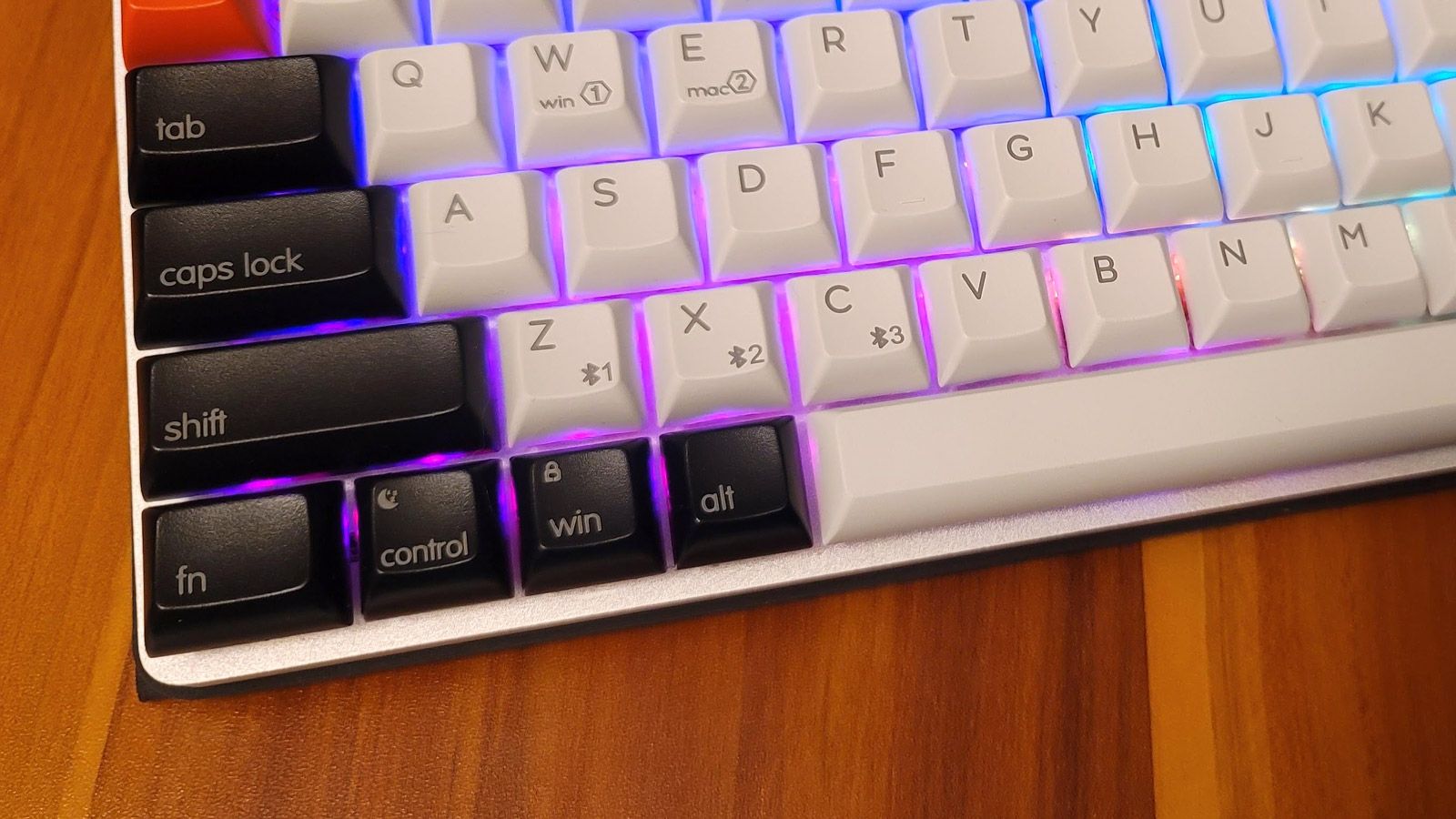 There’s some quirkiness to the design that takes some getting used to. Epomaker has moved the Fn button to the bottom left corner where the Ctrl would usually be positioned. This is great if you’re a fan of using shortcuts on the second layer. I routinely map IJKL to arrow keys, surrounded by Home, End, Page Up, and Page Down to quickly navigate word documents. This positioning works much better for keeping your hands at home row.

Unfortunately, it also means untraining yourself from using that key for Ctrl. Even now, two weeks on with the keyboard, I still Ctrl+C and Ctrl+V only to find out I actually pressed Fn+C and Fn+V. That’s particularly troublesome when connecting over Bluetooth, as Fn+V resets your Bluetooth connection to the third device. It’s something that has gotten better with time but I would much rather have seen Fn in place of the Windows key.

When it comes to travel, Epomaker has nailed it. The keyboard is small enough (12 x 4 x 1.25 inches) that it easily slides into my messenger bag alongside my laptop. The magnetic case is also quite nice, protecting the keys from popping off inside a bag. It also has multiple folding points and three rubber tabs that can create a shelf for a smartphone or tablet. I’ve written multiple articles using just the NT68 and my Samsung Note 20 riding passenger in the van on family trips. I wish the keyboard had tilt feet built-in but the case can also be used to angle the keyboard. It’s a pivotal accessory.

The magic function works well but is only recommended for compact laptops of 14 inches or less. That’s a bit disappointing since many Windows laptops (especially gaming laptops) use 15.6-inch screens. It’s one more indicator that Epomaker had Apple users in mind for this keyboard. 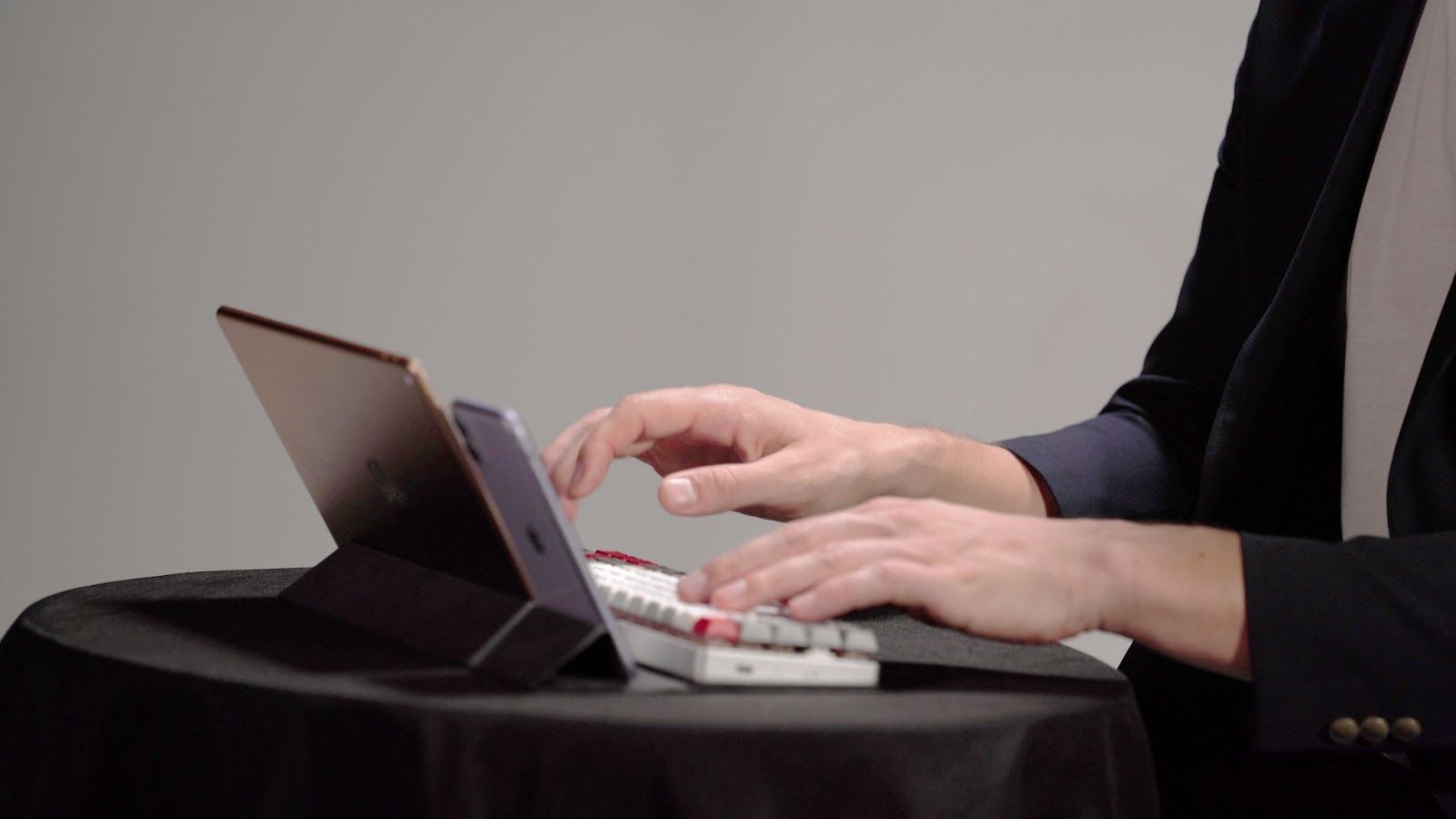 I’ve seen some commentary about how useful a feature like this is since laptops already have functional keyboards. In that way, the “magic” of this keyboard really will be more limited. That said, I’ve never used a laptop that feels quite this good to type on and the programmability makes it a much better fit for gaming if your manufacturer doesn’t support macros and remapping.

If you do plan to use those features, be prepared for unpolished software. The NT68 uses the same software package as the GK68XS and, while it’s functional, isn’t intuitive. Figuring out how to remap keys and get those to save to the keyboard’s onboard memory took trial and error when these functions are straightforward on bigger name keyboards. This is an area that could definitely be improved but will get the job done until it is.

Last but certainly not least, we have battery life. Inside the shell, the NT68 features a 1900mAh. Without backlighting, Epomaker quotes 2-5 weeks of use. With backlighting, that drops to 20-80 hours, depending on your mode and brightness level. I’ve used the keyboard mainly over Bluetooth the last two weeks, mixing RGB off when I’m out and about and the rainbow wave with full brightness at home. There’s no easy way to tell what your remaining battery life is on the fly, but in that time, I’ve yet to see the low battery indicator, so it’s safe to say you won’t need to charge often. 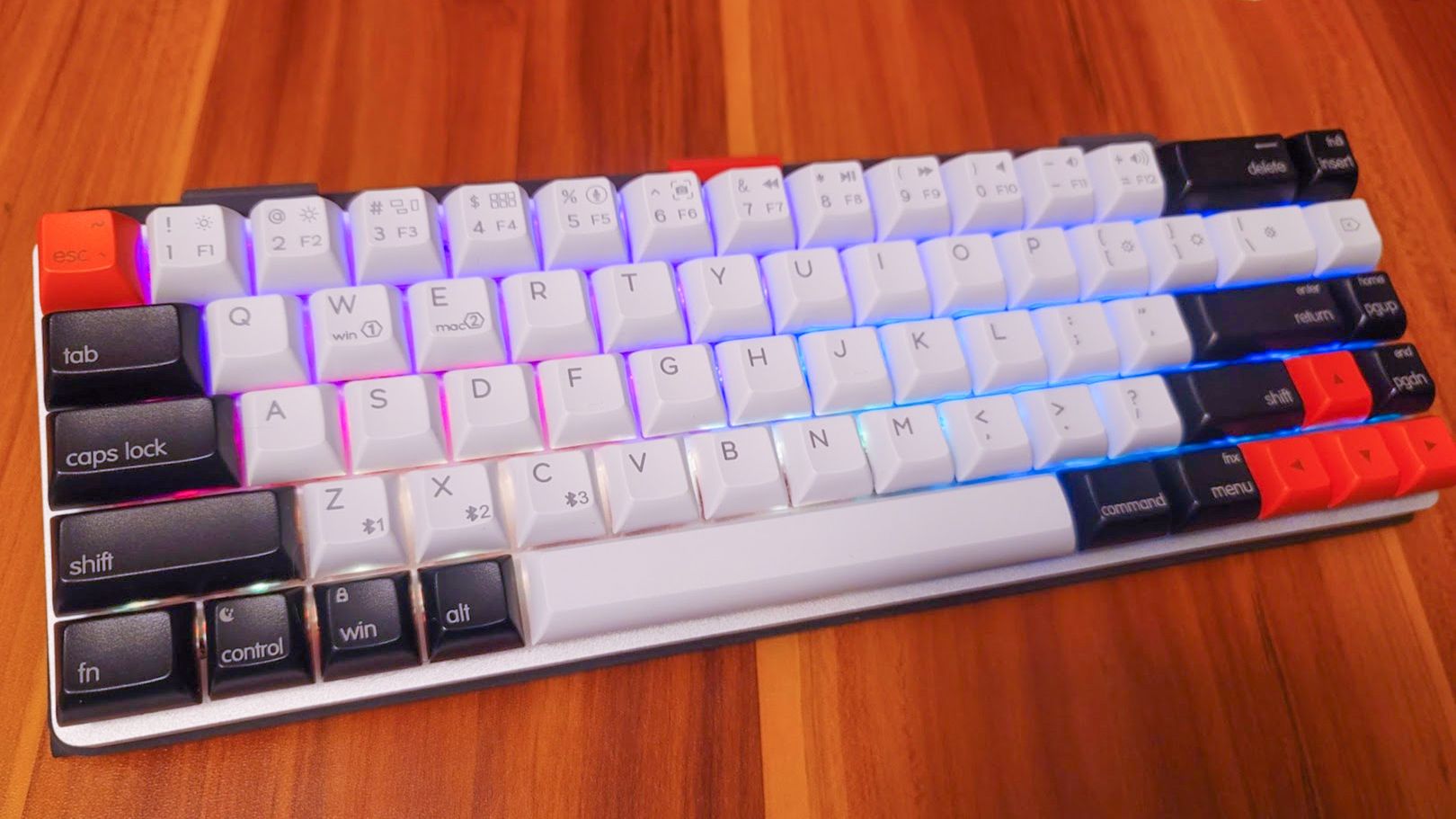 Even if the “magic” feature will be more limited for Windows users, the NT68 is still a great little travel keyboard. Its compact size and magnetic case make it one of the best keyboards I’ve used for writing and gaming on the go. If you can get past the unrefined software, this is an excellent little portable mechanical keyboard.

The product described in this article was provided by the manufacturer for evaluation purposes.
8.0Great
Pros
Cons
Tags
Mechanical Keyboards
Peripherals
kickstarter
Epomaker