Epomaker has been on a roll with its keyboards over the last two years. We’ve reviewed a number of them here, from the fully aluminum and modular GK68XS to the large and in-charge GK96S. Today, we’re looking at its latest and easily most innovative keyboard with the Epomaker Lite. Built upon an innovative new gasket mount design, it offers a flexible typing experience, full programmability, per-key RGB, hotswappable switches, and, of course, that full CNC case. It's available on Kickstarter now. Find out if it's worth backing in our review!

The Epomaker Lite is the latest keyboard from Epomaker but it’s easily their most exciting to date. That’s because the company has clearly had its ear to the ground to hear the biggest trends in custom keyboards today. The result is a board that’s priced affordably but includes features usually reserved for more expensive custom keyboards.

The Epomaker Lite is a 60-percent keyboard, which is a very compact layout. There is no function row, and everything to the right of the Enter key has been lopped off and relegated to a secondary layer. It’s the same layout used by the popular Ducky One 2 Mini and has been a mainstay in the custom keyboard world for years. 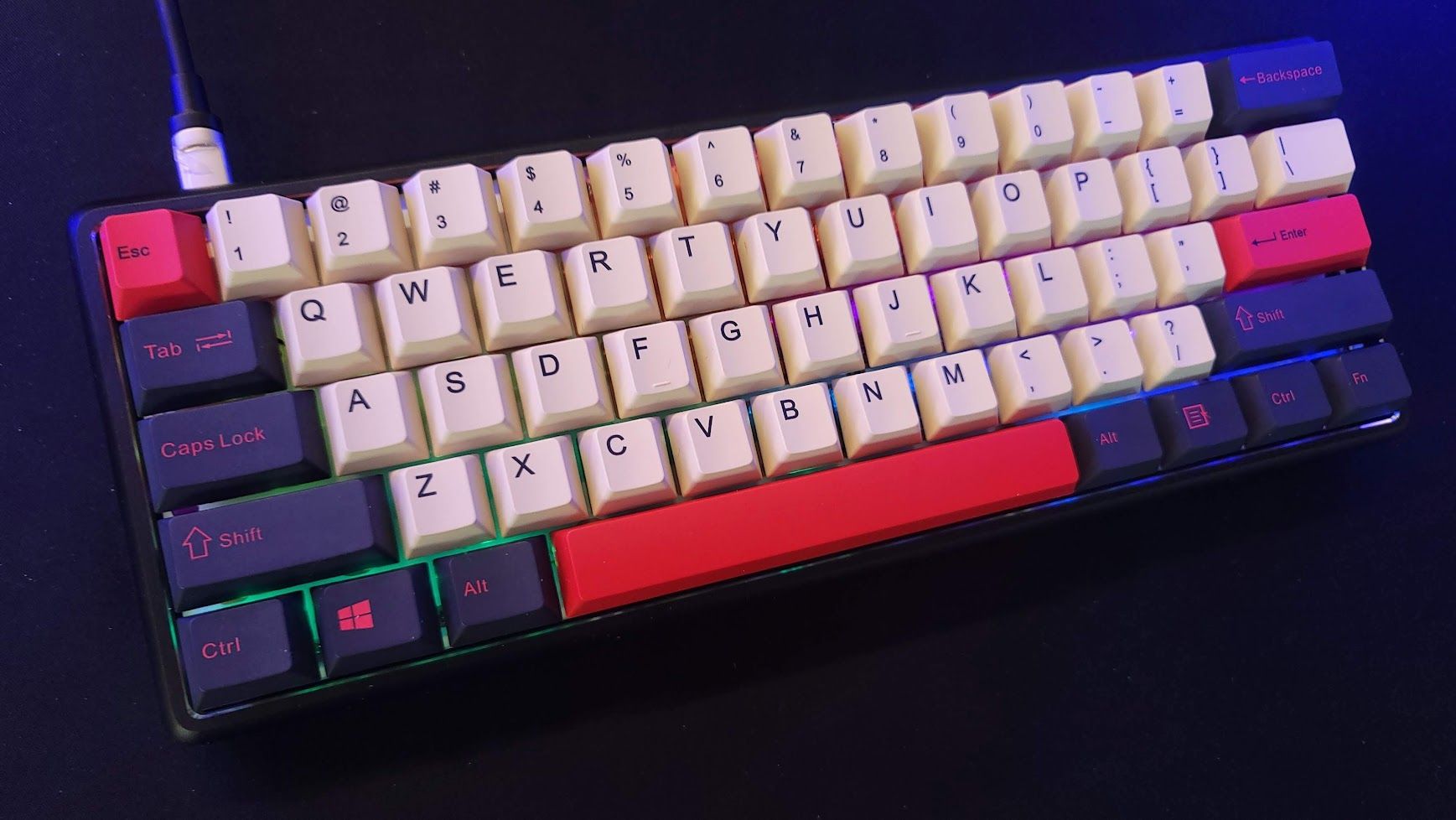 If you’re used to a full-size keyboard, it can take some getting used to and demands customizations inside Epomaker’s software suite to restore some of the missing keys. Doing so is more complex than many keyboard software suites but still isn’t that difficult. You’re able to remap nearly every key, including up to three additional layers accessible with the dedicated function key or another of your choice (I chose Caps Lock, for example, but you can choose just about any that works for you). The benefit here is that, 1) your keyset will be uniquely tailored to how you type, 2) your keyboard and mouse are closer together for better ergonomics, and 3) less desk space will be taken up by your keyboard.

Unlike many of Epomaker’s more recent keyboards, the Lite uses a full CNC-milled aluminum case. The metal is thick and dense, unlike the thinner material used on the AK84 or plastics throughout the GK96S. It feels entirely more premium and much closer to the GK68XS without being quite as heavy. The case would otherwise be a tray mount, meaning the PCB and plate are slotted top-down into the case and screwed into the bottom, but the company has changed things up in a rather innovative way.

Epomaker has transformed this tray mount keyboard into a gasket mount and a unique one at that. The keyboard uses what it the company calls a shallow gasket design and it works in two parts. First, there’s a silicone dampening pad between the plate and PCB. Under pressure it squishes slightly. This is essentially one giant gasket across the whole keyset and is very similar to what we’ve seen on other keyboards like the Ducky One 3, RAMA Works KARA, and TKC Portico. Where things change up is with the second gasket system.

The second gasket comes into play with a series of long screws that attach the plate and PCB to the case. On a usual tray mount, these screws would tighten down and prevent all movement. Here, they’re longer and topped with o-rings between the screw head and plate. The added length allows the PCB assembly to move up and down the shaft of each screw, allowing it to bounce and flex like a traditional gasket. I’ve come to think of these as pole screws.

When mine first arrived, these were tightened down to their max. When fully fastened, they prevent almost all flex. I actually contacted a colleague because I was so disappointed but upon closer inspection, I discovered the problem and loosened the screws. The animation above isn’t an exaggeration, that’s actually the level of flex the board is able to deliver. It does take a push to get there, however, so typing isn’t bouncy. Instead, it’s soft and nicely dampened, improving both sound and feel. It’s honestly quite impressive.

This model also comes with multiple plate options at purchase. My unit was equipped with an FR4 plate, which the same fiberglass material circuit boards are made out of, and is the default plate included with the kit. It’s more flexible than the usual aluminum or steel plates and creates a lower-pitched typing sound when bottoming out the keys. For an additional $30 and $27 respectively, you can opt into polycarbonate or steel plates for softer or firmer typing experience with lower or higher pitched tying sounds. 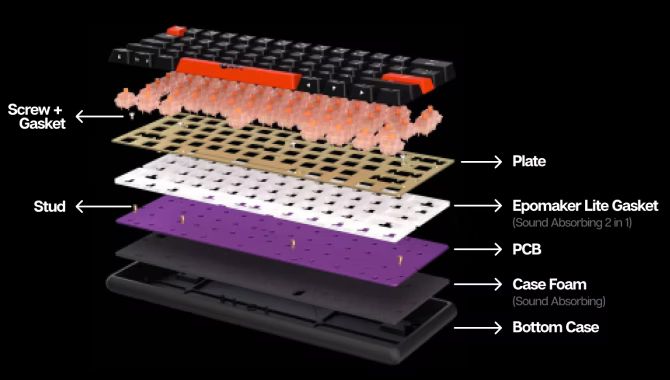 Epomaker has also added a layer of foam beneath the PCB. This is to separate the PCB from the case and reduce pinging. It’s thin and lightweight, which is good for flex but just barely works to reduce ping sounds. It’s worth replacing, which I’ll get to in the next section, but is good to see included.

In addition to these features, we also have Epomaker staples returning again: hot-swappable switches, per-key RGB illumination, and full programmability. Hot-swap switches are welcome feature, especially on a board like this that can act as an introduction to the keyboard hobby. Instead of having to solder and desolder switches, they simply plug into the PCB and are removed just as easily, making it easy to try new switches or replace broken ones. 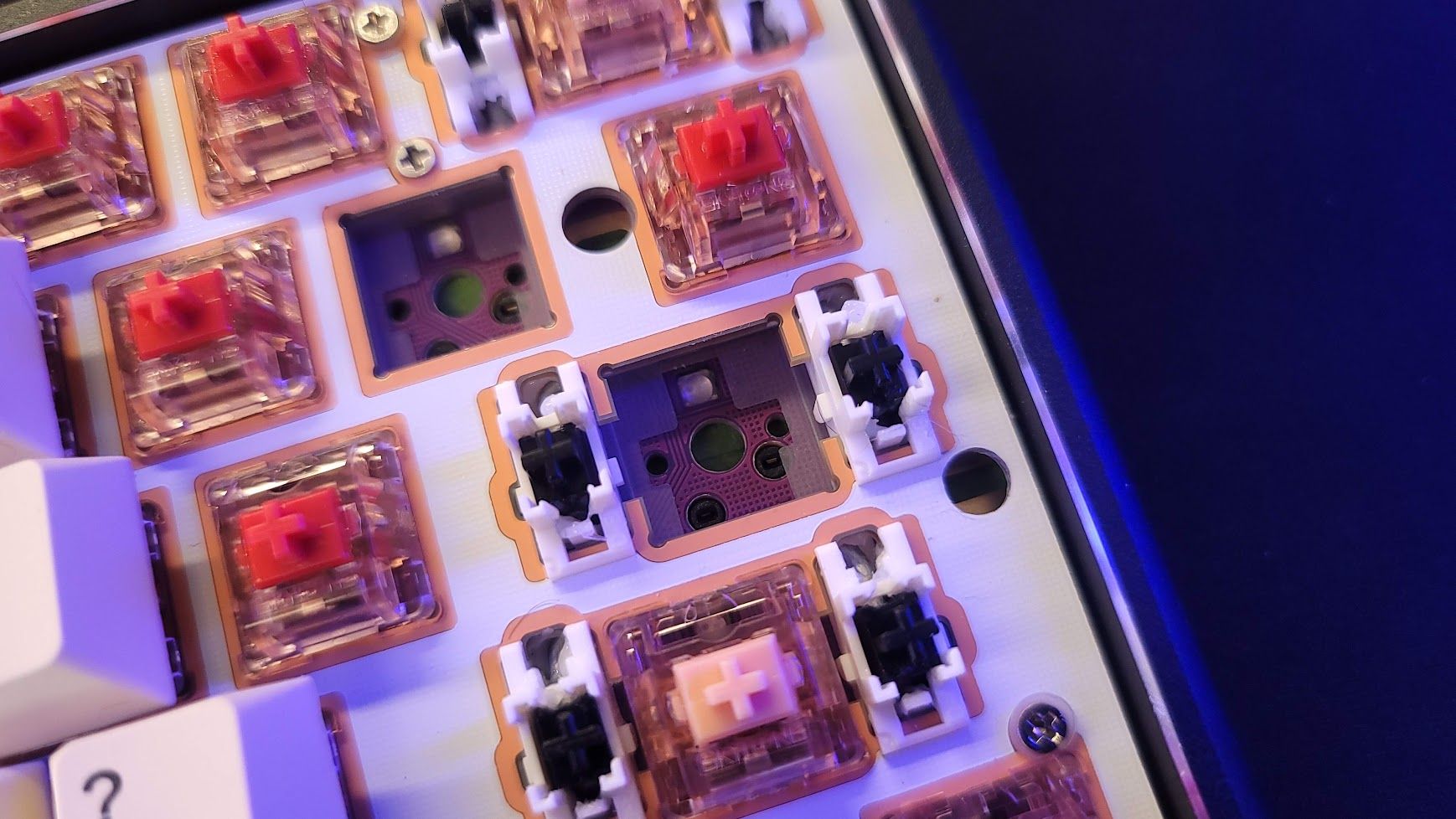 The switches are another big clue (along with the gasket mount) that this keyboard is designed to cater to the enthusiast audience. You’re given your choice of Gateron Pro (blue, red, brown, black, yellow, or white) or Skyloong Chocolate switches, each of which come pre-lubed. I was also surprised to find that Epomaker has even gone so far as to install heavier tactile Rose Brown switches for the modifiers. It’s a level of consideration I haven’t seen on any other board at this price.

About that lubing… it wasn’t great. Much better than a dry switch — my Chocolate Reds were far smoother than Cherry MX Reds — but the lubing was very light and didn’t touch the springs at all, so there was a good amount of ping still coming from the switches themselves. It also wasn’t very consistent, so I wound up relubing mine. The sound changed drastically, so it’s worth taking the time to do. 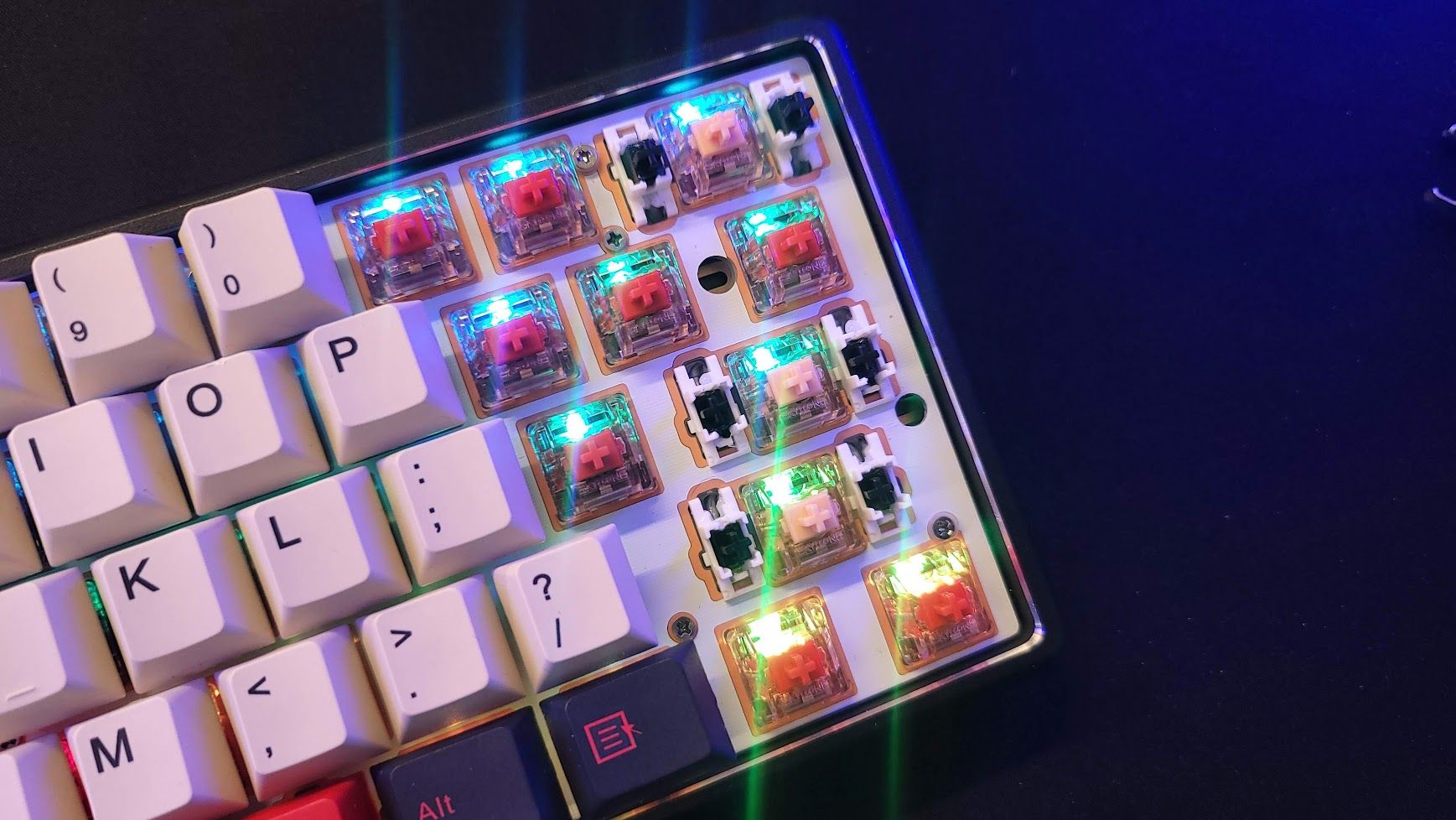 Finally, the board supports wireless connectivity over Bluetooth. Given the added weight of the board (it’s not heavy but is certainly not a travel keyboard), this may be a little less useful here but is still a nice feature if you need to get work done on a tablet. The board supports Bluetooth 5.1 across three devices. Connection was reliable and stable but due to the aluminum case doesn’t have the same range as plastic keyboards like the GK96S. Still, do you plan to carry the keyboard a room away from the screen you’re typing on? Probably not, so I found it worked fine.

Battery life is also decent but spans widely. Epomaker rates it at 10 - 80 hours depending on your RGB settings. Since the keys aren’t backlit, you’re not sacrificing much disabling RGB for portable use.

Like Epomaker’s other keyboards, this suite uses Skyloong’s GK software and does not support QMK or VIA. It’s a shame, too, because the software suite is still pretty confusing and unpolished — especially for RGB. You’re able to program up to three layers of keys. The standard (top) layer is not editable, so you’ll never lose the core functionality of your keyboard. You can change profiles to other layers with a quick Function command, however, so swapping to custom layouts is fast and easy.

The software gets the job done but it’s more complicated than most other layouts. Remapping keys is easy enough, but RGB is much harder. Programming a custom layout is handled in a separate screen and isn’t straightforward at all. There are lots of different presets to choose from (including about 10 onboard) that are also customizable within the software, but none of them are intuitively named and there are more than a dozen options that are clearly for other keyboards.

Please, Epomaker, bring QMK to your keyboards! Or at least work on polishing up this one. It’s been the same for too long and never gets any easier to work with.

My out of the box typing experience was not very good. The pole screws were far too tight, killing any flex. After disassembling and reassembling the board multiple times, I can tell you that, in fact, they shouldn’t be tight at all. Simply catching the threads and turning enough so they won’t fall out is enough. With that done, my experience became much better.

The Epomaker Lite offers a smooth, dampened typing experience thanks to its silicone mat and gasket implementation. There isn’t much flex in actual typing but the silicone pad and tiny amount of give with the shallow gasket structure does make typing feel very soft under the finger. The stock stabilizers are also pretty good and are factory lubed out of the box. The stabilizer needed a bit more grease on the wires but the modifiers were in good shape. 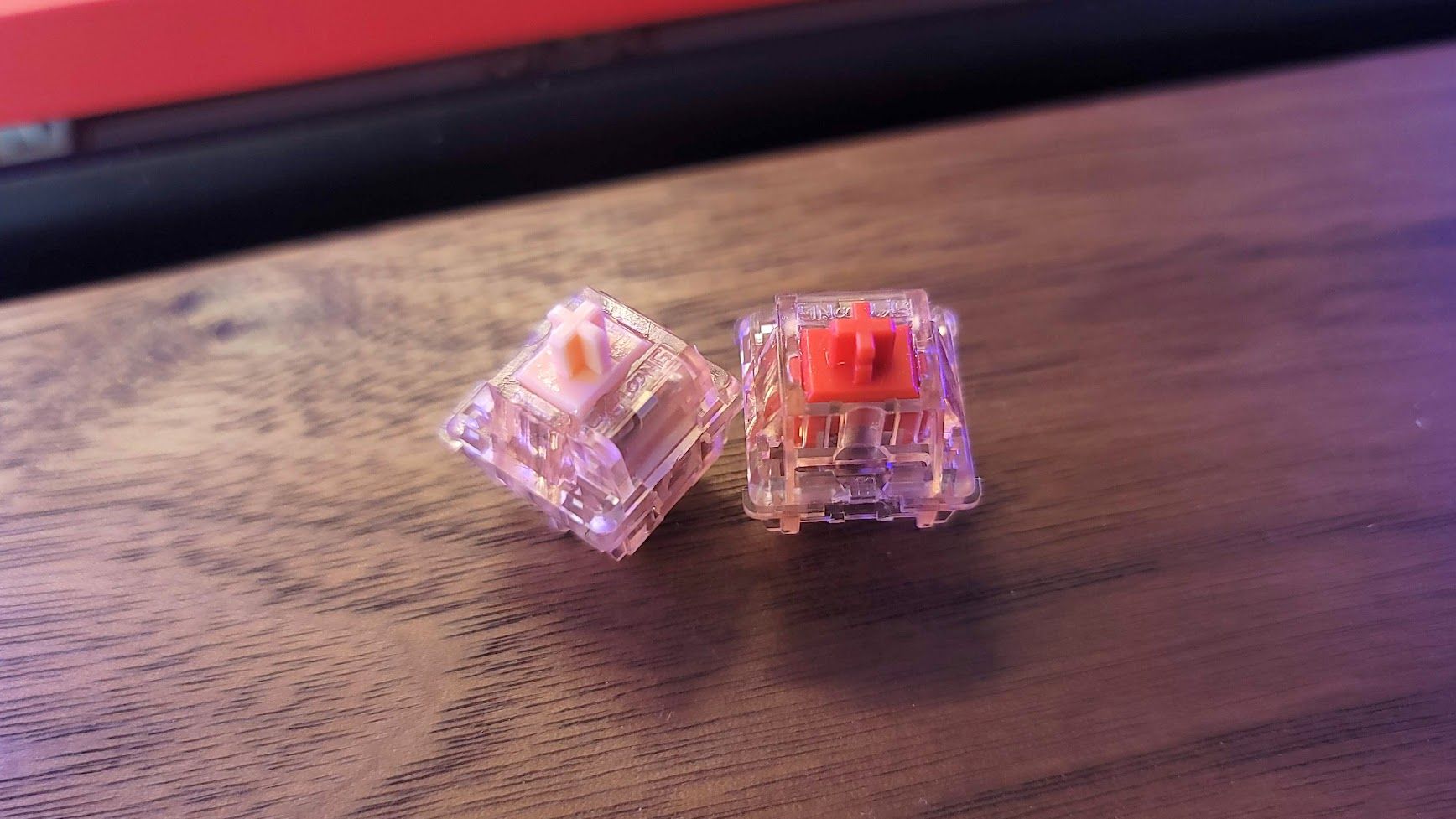 Unfortunately, the pole screw implementation does allow the impacts from bottom outs to travel through the case and ring out. The bottom foam doesn’t do much to help this. Likewise, the lack of lube on the springs for the switches also rings out, there is a good amount of resonance that needs to be addressed.

I started by hand lubing all of the switches, including the springs. Doing so improved smoothness but also made a big difference in the sound quality of the Chocolate Reds. I also added a touch more lube to the stabilizer wires to balance out the sound better with the freshly lubed switches. 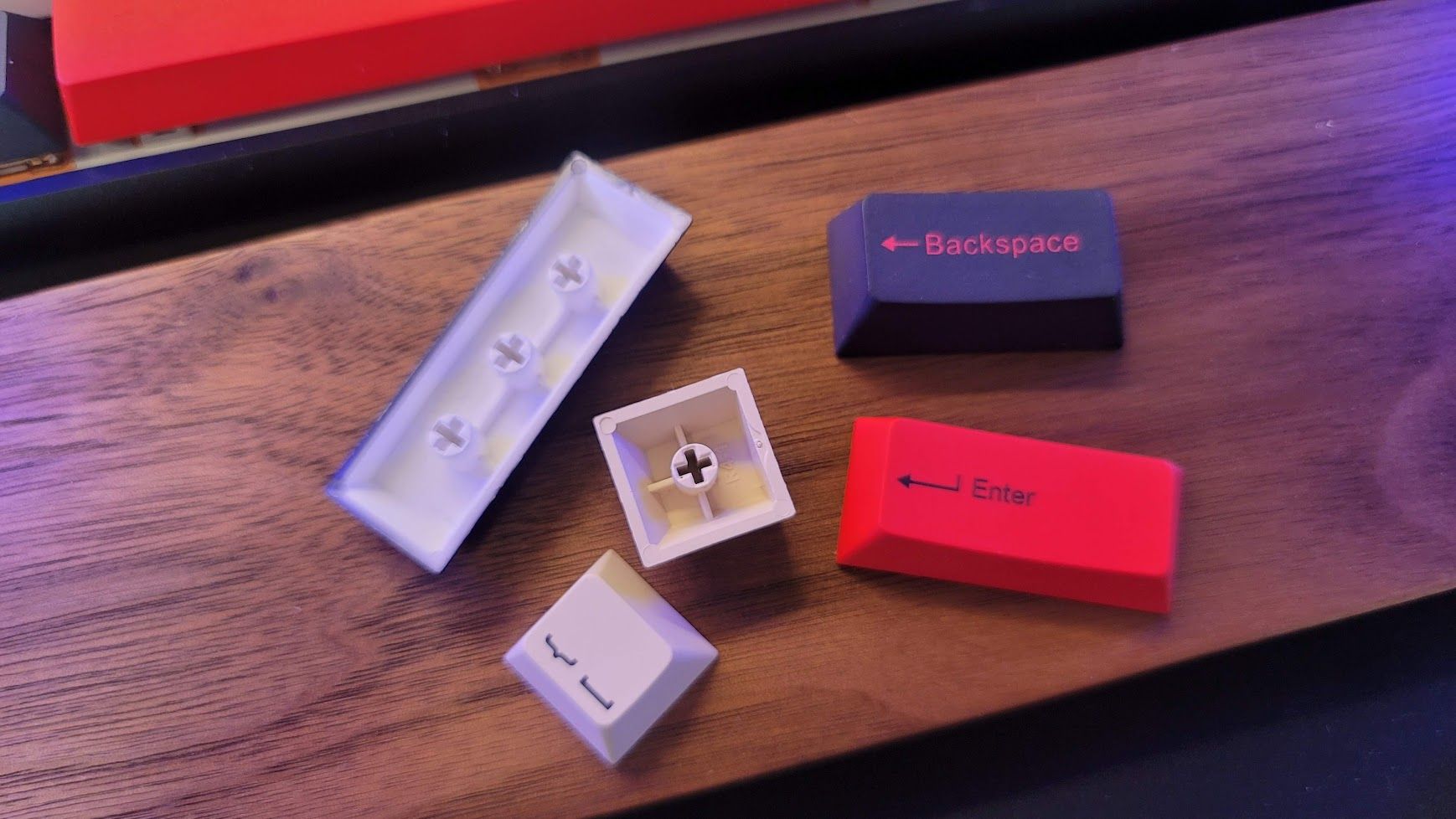 Next up, I applied the tempest tape mod. This is a simple modification that can improve the sound of many keyboards. I applied three layers of Frog Tape painters tape, cutting out a hole for the battery port.

Finally, to address the ping I pulled out the bottom foam and replaced it with a 1mm layer of Kilmat sound deadening material. This was more of a task than I anticipated due to the many pegs for the screws and the unique internal geometry of the case. There really isn’t much room in the bottom, so whatever you replace this with needs to be thin and can’t lie on to of any of the inclines without removing a good amount of flex. I’m pleased with where it landed though.

See and hear the keyboard below:

Taken as a whole, the Epomaker Lite is Epomaker’s best keyboard yet. It’s trying new ideas, which is great to see. There is still room to grow here, addressing that ping and the software polish, but the gasket implementation here works well and it’s great to see extra features like a silicone mat, and two different kinds of pre-lubed switches included at this price. With a few simple mods, it sounds and feels great — and, at this price point, users that care about features like gasket mount probably expect to customize their keyboard a touch before it reaches final form. As a basic package, it’s pretty good but with that bit of extra effort it can be even better.

Find out more on the official Kickstarter for the project here.