Epomaker is an up-and-coming brand in the enthusiast mechanical keyboard space. It first came onto my radar with the absolutely excellent GK68XS and again in November when it released its GK96S, which was also outstanding for the price. Today, I’m looking at my third Epomaker-branded keyboard with the HS84. Like the last two, it’s also compact to save desk space but uses a less common 75% layout. It’s also programmable, supports N-key rollover for gaming, and features a frosted translucent case for eye-catching RGB effects. Coming in at $75.99, is this the right keyboard for you? 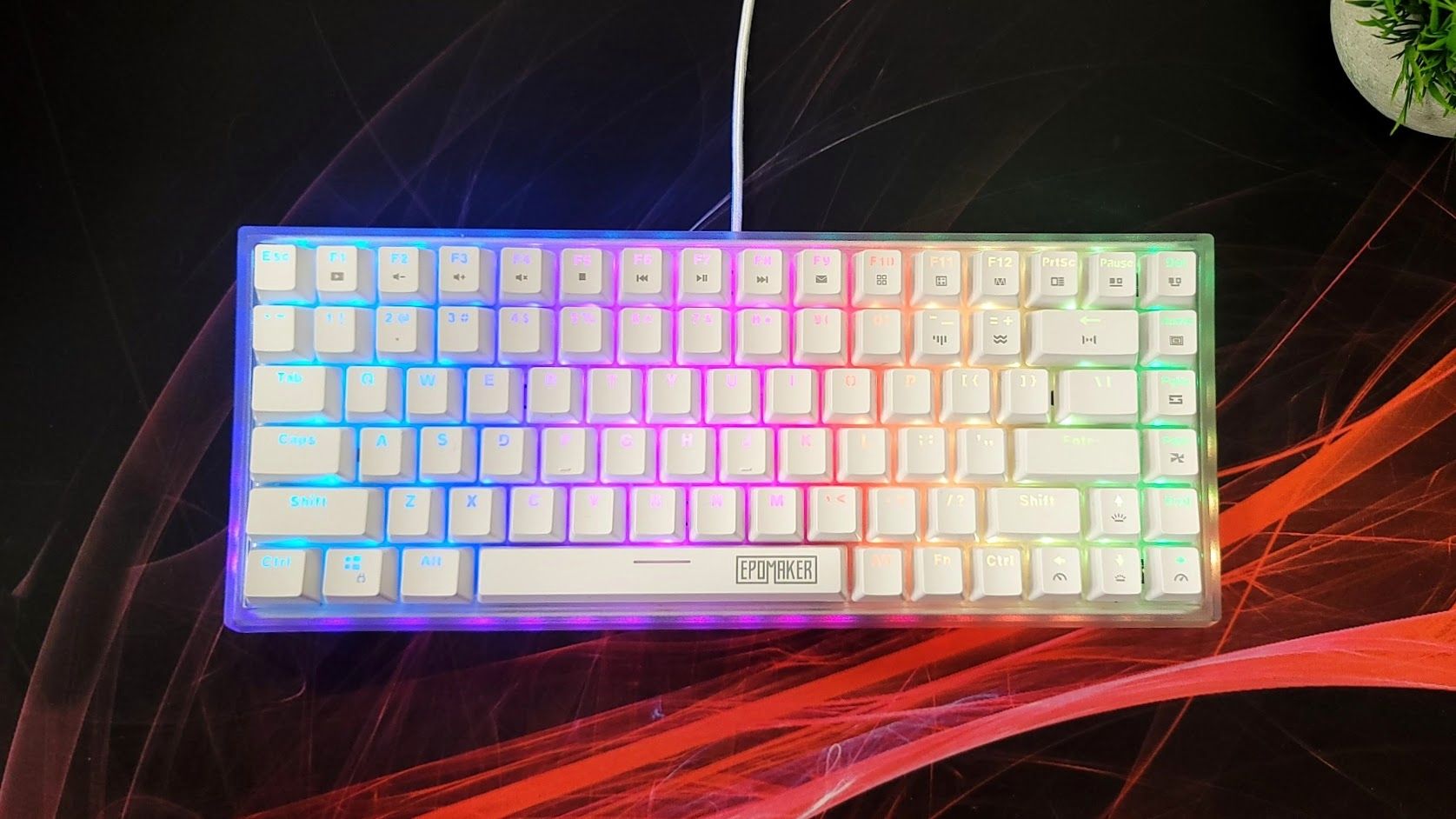 At $75, the Epomaker HS84 offers quite a bit for its relatively low price. Its compact form factor offers 99% of the functionality of a tenkeyless while being only slightly larger than a 60% like the Ducky One 2 Mini. It’s an RGB showcase with its fully translucent case and more than 40 underglow LEDs. It’s also customizable with onboard lighting customization and macro recording. It even supports hot-swapping, so you can change switches or modify stabilizers with ease. Taken as a whole, it has quite a lot going for it.

Despite any features it might offer, you’ll probably know if it’s the right keyboard for you based on the lighting alone. As a lover of all things RGB, I like that design; it makes the keyboard look unique and can be a genuine conversation starter. The translucent case turns the entire board into one big backlight and illuminates the surrounding area on your desk. Compared to the average Razer Chroma keyboard, it’s entirely next level. 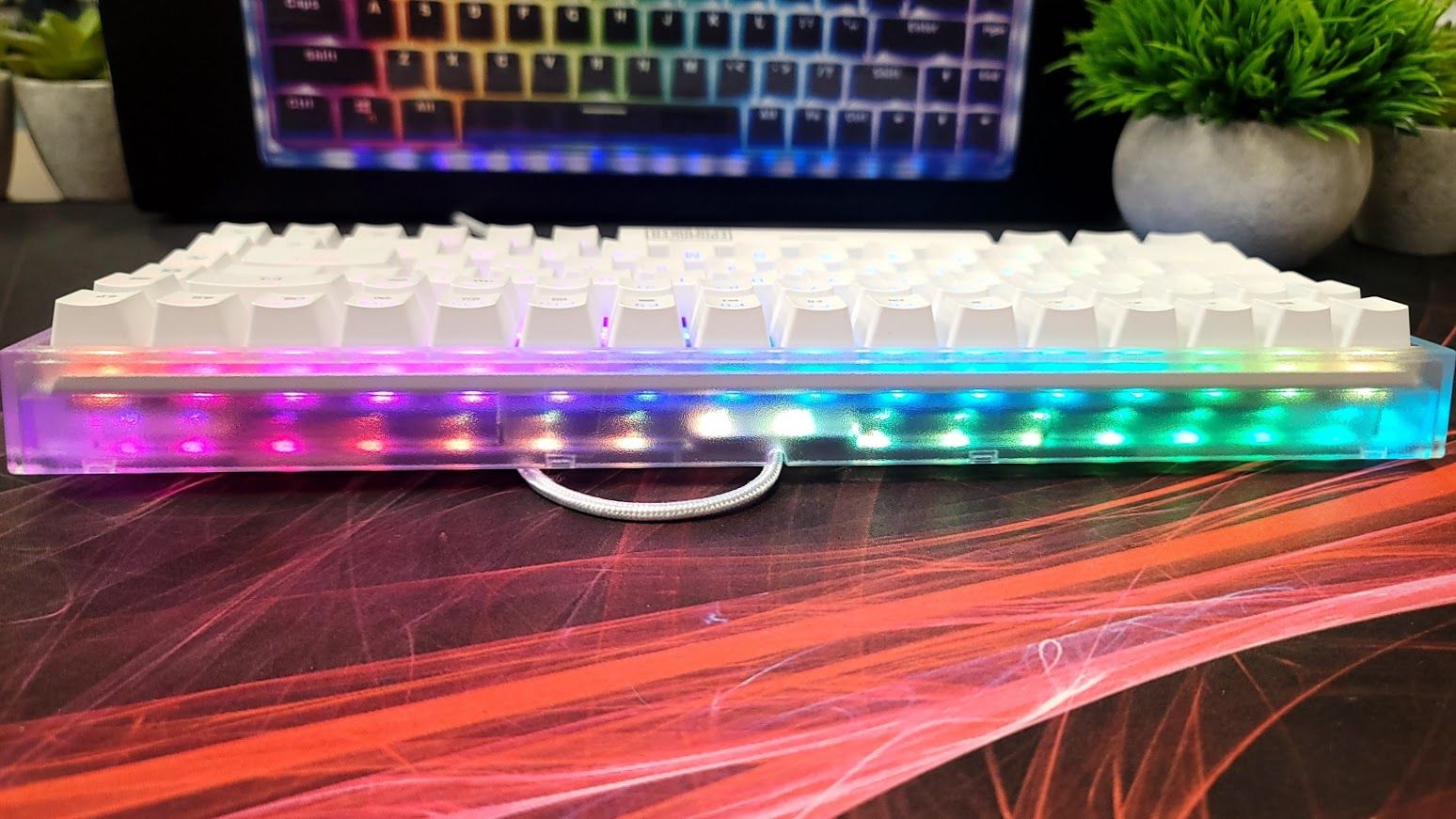 The lighting is also customizable without any software. There are eleven preset effects for the under key lighting and three animation options for the case “mood” backlight. You can also select from eight different colors for a static backlight of either. I was also impressed to see that Fn+Backspace allows you to set a custom lighting scheme by tapping individual keys through those eight different colors (or turning them off entirely).

If you do like the lighting, the next consideration will be the layout. The HS84 operates in a unique space with this design. The “whole RGB keyboard” market is a niche of its own and, until now, there hasn’t been a 75% to fill that gap — at least to my knowledge. And the layout itself is actually an excellent middle ground between size and functionality. In fact, you’ve probably spent a good amount of time using it yourself since it’s the exact layout used by most laptop manufacturers! This layout does make it harder to find replacement keycaps for, however, and you might find yourself wanting to replace them. 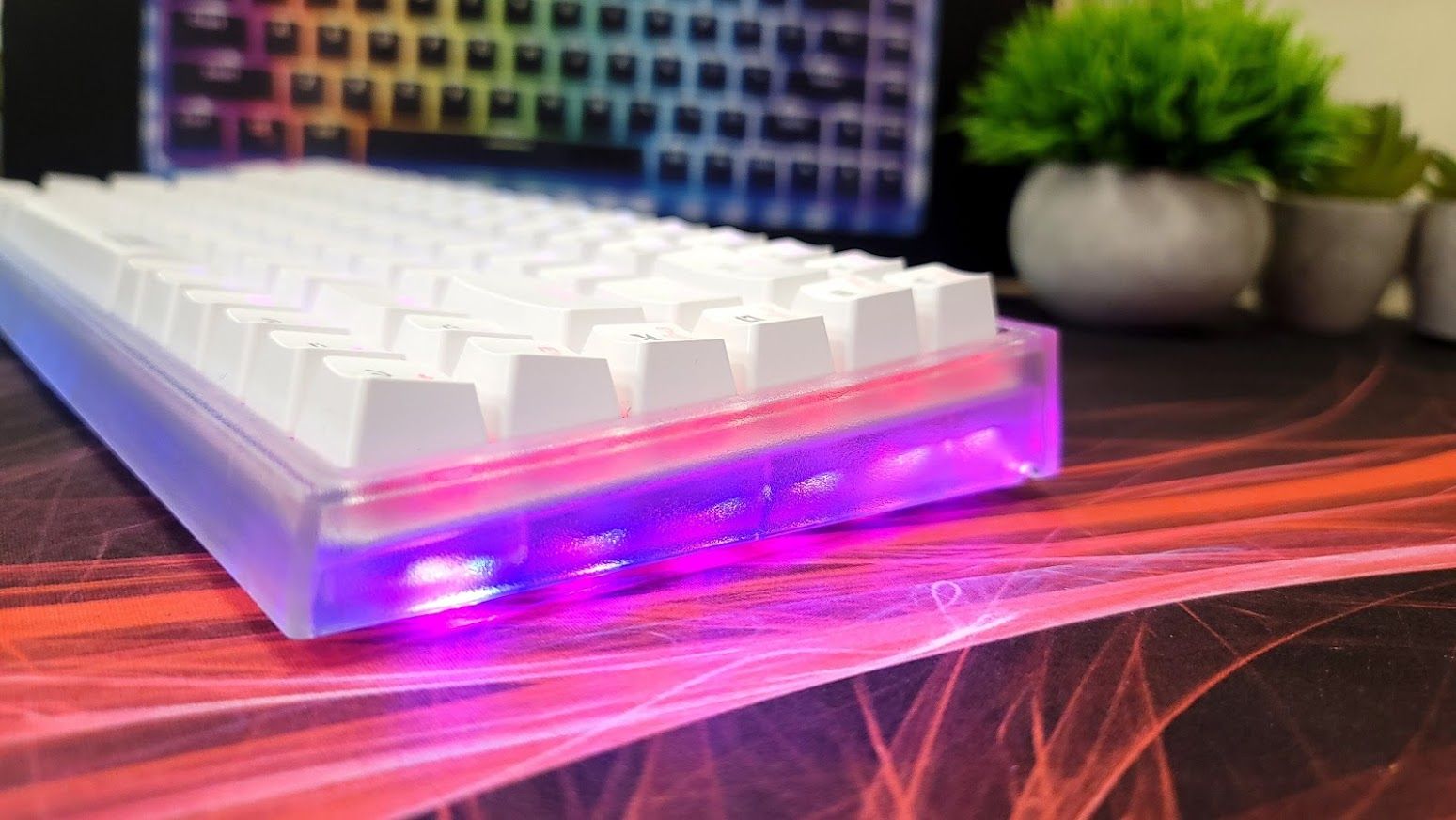 The HS84 uses doubleshot ABS keycaps. They feature backlit legends (of course) that are made from a second piece of plastic, so you won’t need to work about the surface chipping away over time. Since they’re ABS, they’ll be susceptible to shining over time but are lightly textured to stave this off for quite a while. Epomaker decided to make them quite thin to allow the lighting to shine more brightly. It makes sense but does making the typing experience feel a bit more lightweight than many of Epomaker’s other keyboards. That said, we’re talking about the difference between the feel of standard gaming keycaps and thick enthusiast sets, so if you don’t consider that important, it probably won’t matter at all to you.

Since this is a gaming keyboard, it’s also filled with secondary functions accessed with the Fn button. The function row doubles as media controls and lets you open the calculator, mail app, and enter macro recording mode (you’re limited to five stored macros at a time). The navigation cluster and arrow keys let you choose a lighting effect and the right CTRL/ALT allow you to swap lighting modes for front and rear lighting. It supports N-Key rollover, so all of your key presses will register and has the ability to lock the windows key. A software package is set to come in the future but is not available as of this writing.

Underneath those buttons are the heart of any keyboard: the switches. The keyboard uses Gaterons switches which don’t have the reputation of Cherry, but I also find them to be smoother and less “pingy” with spring noise. They’re also available in flavors beyond the normal linear red, tactile brown, and clicky blue. My unit came with Gateron Reds,  but I would highly recommend linear fans to try Gateron Yellows as they’re considered one of the best budget switches available. Since the keyboard supports hot-swapping, you’re also free to try out different switches without needing to buy a whole new keyboard or to replace individual switches that stop working. 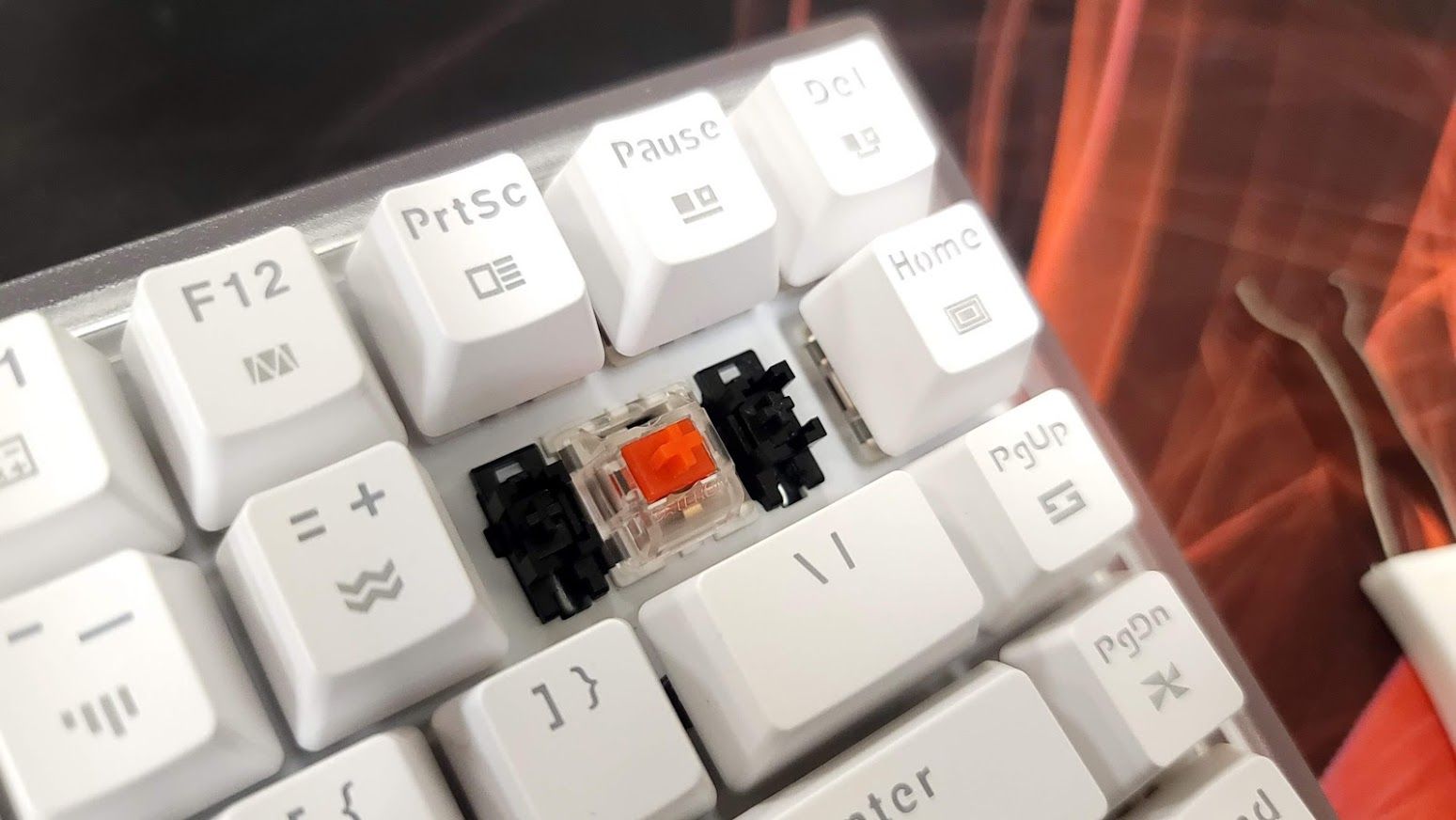 One thing I’m not a fan of is how Epomaker chose to frost the case. Compared to a Womier K66, the HS84 is much more translucent, so you can clearly see each individual LED. I prefer the lighting to flow together without hot-spotting but that’s not possible here without significant modding. That also makes the bottom of the case more of a window straight to the PCB, and combined with the green info sticker, it just doesn’t look great. It’s the bottom of the keyboard, so it’s hardly a major issue, but still something to be aware of.

Along with that, the sound and feel of typing isn’t as good as it could be. The case doesn’t have any foam to fill up the empty spaces, which makes the keys sound higher pitched and lightweight. The stabilizers are somewhat lubed from the factory but are still quite rattly. It’s not bad but is clearly a step down from the GK68XS and GK96S. 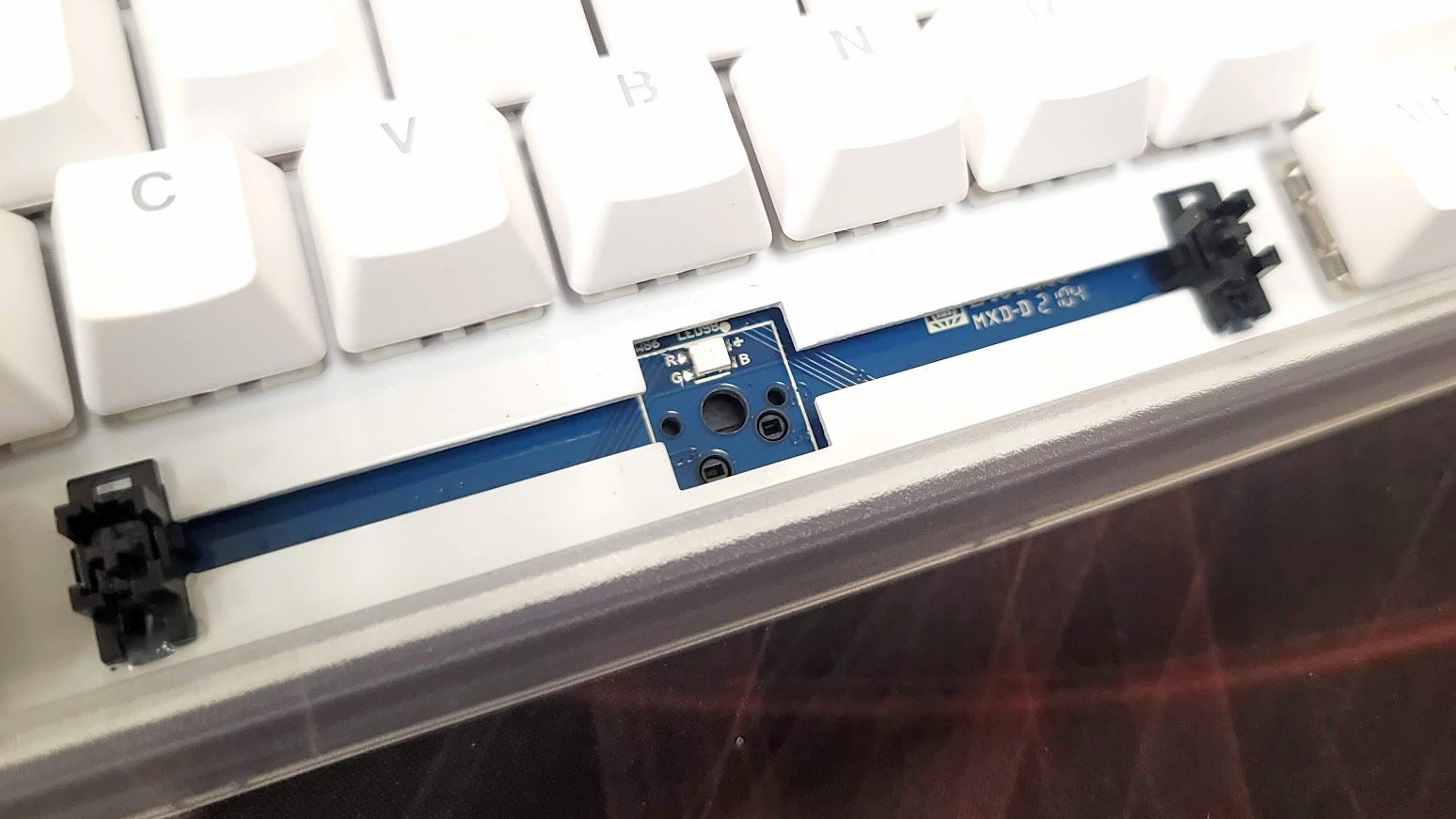 That said, with a few easy mods you can make this keyboard sound and feel much better. In fact, this is one of the most easily moddable keyboards I’ve used, so with only a few dollars and time, you can elevate what’s a “7” out of the box to an “8.” It’s a great starting point for getting into keyboard modding and is definitely worth it for the improvements to the typing experience. 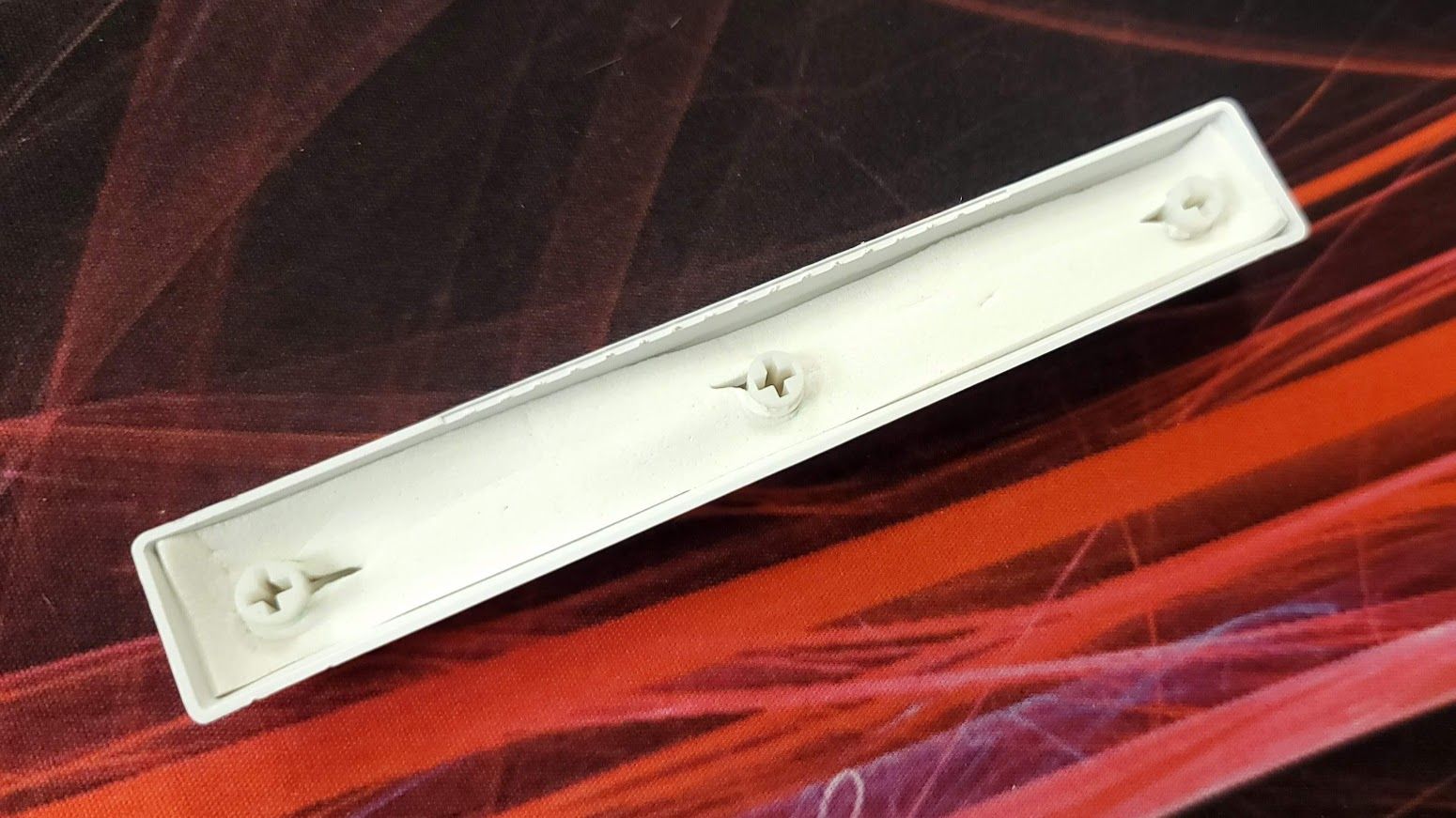 Before this writing, I’ve modded the stabilizers and spacebar. I plan to do two more before I’m through. Since it’s hot-swappable, modding the stabilizers is quick and easy. I added some lube to the ends of each wire to cut down on rattle (basic dielectric grease from Autozone ~$3), clipped the feet so they were flat and added a piece of bandaid under the PCB where they make contact. The whole process took about 20 minutes and dramatically improved their sound.  The spacebar sounded a little hollow in combination with the case, so I added a bit of cut foam from another package that came in to deaden the sound. You can use pretty much anything here, though neoprene is good and cheap.

Going forward, my next step is to add some neoprene to the bottom of the case, covering the PCB and removing some of the hollow feeling that exists out of the box. While it’s disassembled, I also plan to use some fine-grit sandpaper to rough up the inner surface of the case to help diffuse those hotspot LEDs. Neoprene and sandpaper are less than $10 combined. 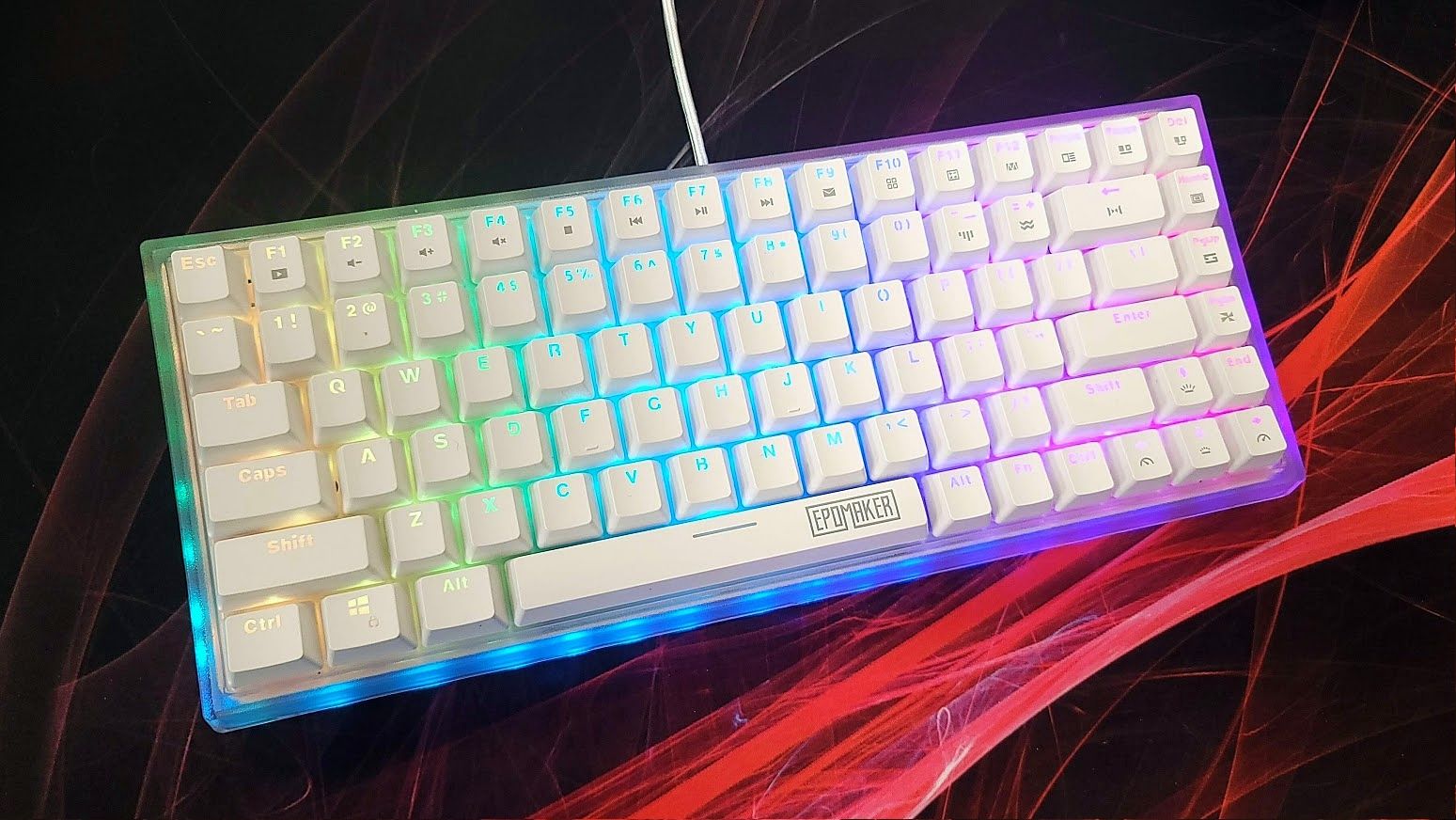 Out of the box, the HS84 is a unique keyboard that makes for a great conversation starter and enhancement to your desktop. You have to love RGB as a requirement for entry, but if you do, it’s one of the only ways to get a translucent keyboard in a 75% layout. What’s most appealing about it is its price. At $75, it’s on the cheaper end and you can feel that in a few areas of its design. But, if you’re willing to put in a little bit of time, you can easily mod it to make it much better and save that money you would have otherwise spent on a more expensive keyboard. In its modded form, it could approach being an 8. Out of the box, it lands closer to 7.

The product described in this article was provided by the manufacturer for evaluation purposes.
7.0Good
Pros
Cons
Tags
Mechanical Keyboards
Epomaker