Do you have a soft spot in your heart for the early days of computing? Epomaker’s new B21 wireless mechanical keyboard might just be for you. It’s retro-inspired but built for the modern user with dual-mode wireless and wired connectivity, two control knobs, and a compact 65-percent layout. Is it worth a buy? Let’s take a closer look and find out.

The Epomaker B21 is quite the unique keyboard. When the team first told me they had a retro-themed keyboard in the works, I immediately assumed it would follow the trend of typewriter keyboards we’ve seen so much of the last few years. Instead, the B21 is a blast from the past complete with the two tones of tan from the days of Compaq and IBM (and a dose of color with the knobs and a few accent keys). Of course, if all it was was a basic mechanical keyboard dressed up in old-school colors, it wouldn’t be that interesting at all, but the B21 effectively blends nostalgia with modern features to deliver a keyboard that simultaneously takes you back and makes you happy for all the advancements since those early days.

In addition to the color scheme, it feels distinctly retro in other ways. It uses extra tall SA profile keycaps, the same style as used on the terminals of yesteryear. The keycaps are double-shot, which means the legends are made from a second piece of bonded plastic and will never fade. The case itself is also made of matching colored plastic with an 80s-style gloss finish. The case has rounded edges and a natural angle instead of tilt feet. Along the top row of the keyboard is a tall forehead with dedicated media buttons, a calculator shortcut, and buttons to choose the operating system and Bluetooth profile. To the left and right side are clickable rotary encoders for controlling volume and customizing the white backlight. 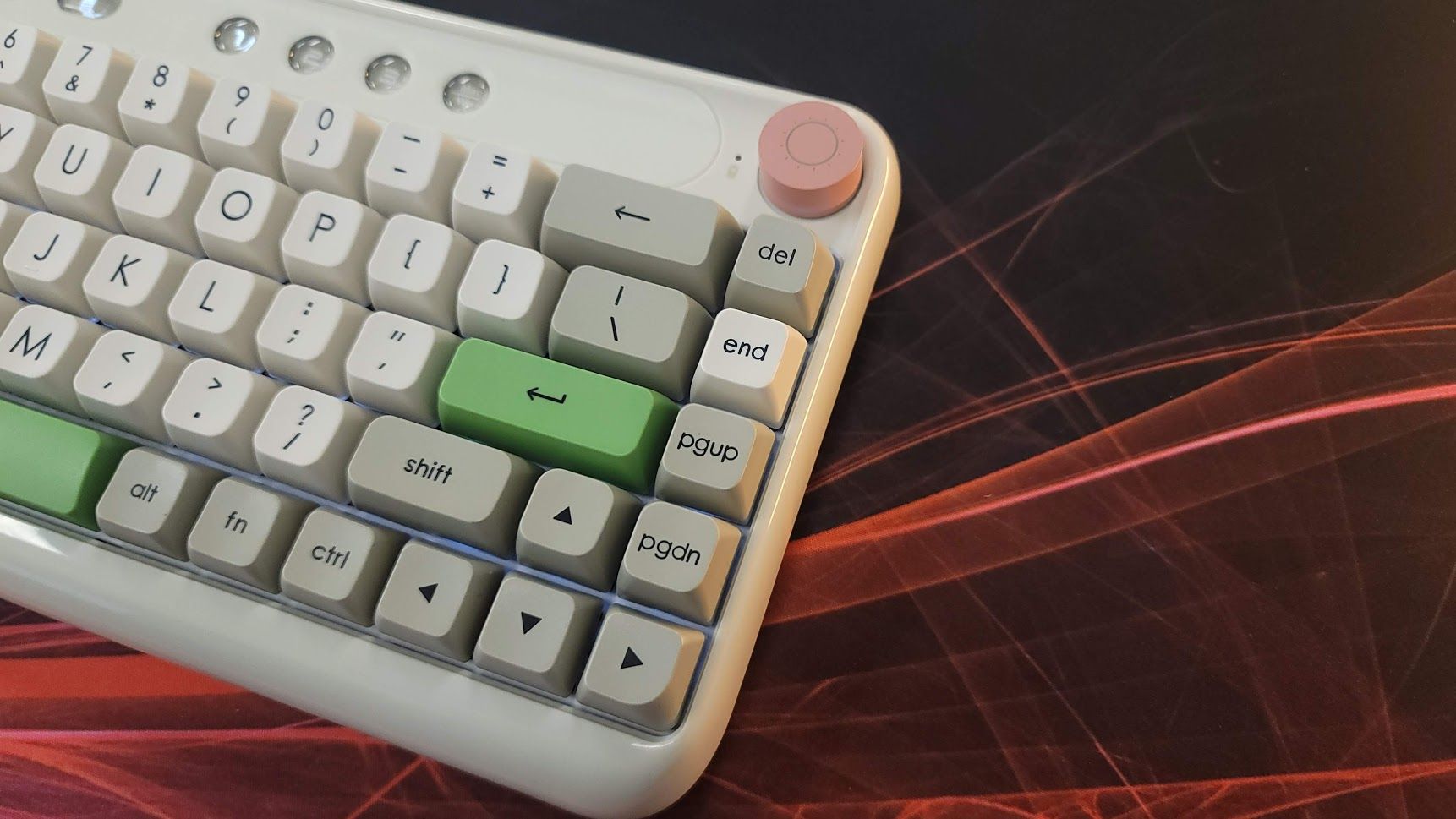 When it comes to layout, the B21 adopts a 65-percent design. For the uninitiated, that means it’s ultra-compact but offers functionality similar to a tenkeyless keyboard. It features dimensions of only 12.5 x 5.8 inches. It maintains this much more compact size by eliminating almost all of the lesser-used keys on a normal keyboard. The number pad, function row, and navigation and editing cluster mostly get the axe. I say mostly because the right side of the keyboard still features a single column of navigation and editing keys, as well as arrows. These keys are delete, home, page up, and page down. The function row is also still accessible by holding the Fn button and tapping any button in the number row, so you’re not losing those keys just to save space. This is a layout that’s become popular in recent months and for good reason: the space savings compared to a TKL or full-size keyboard is great for gaming and even just normal computer use since you can keep your hands closer together.

Underneath its tall, clacky keycaps the B21 comes with your choice of Cherry MX key switches. Linear MX Red, tactile MX Brown, or clicky MX Blue are all available. These are the Grand Daddies of keyboard switches these days but there’s no way around the reputation Cherry switches have earned for consistency and reliability.  I would have loved to see a wider variety of switches available, but it’s easy to know what to expect between these three if you’ve used mechanical keyboards for any length of time.

The keyboard is backlit but it’s tastefully done and doesn’t wreck the vintage aesthetic. It’s a simple white backlight and the keycaps are not shine through, so the effect is subtle. What we have here is plain white, though there are a handful of different lighting presets for breathing, reactive typing, and a few animated effects. Since the switches aren’t RGB (meaning, the top isn’t translucent) and the keycaps aren’t shine through, the lighting isn’t very bright and looks best with a simple static illumination. It’s not exactly vintage but looks nice nonetheless. 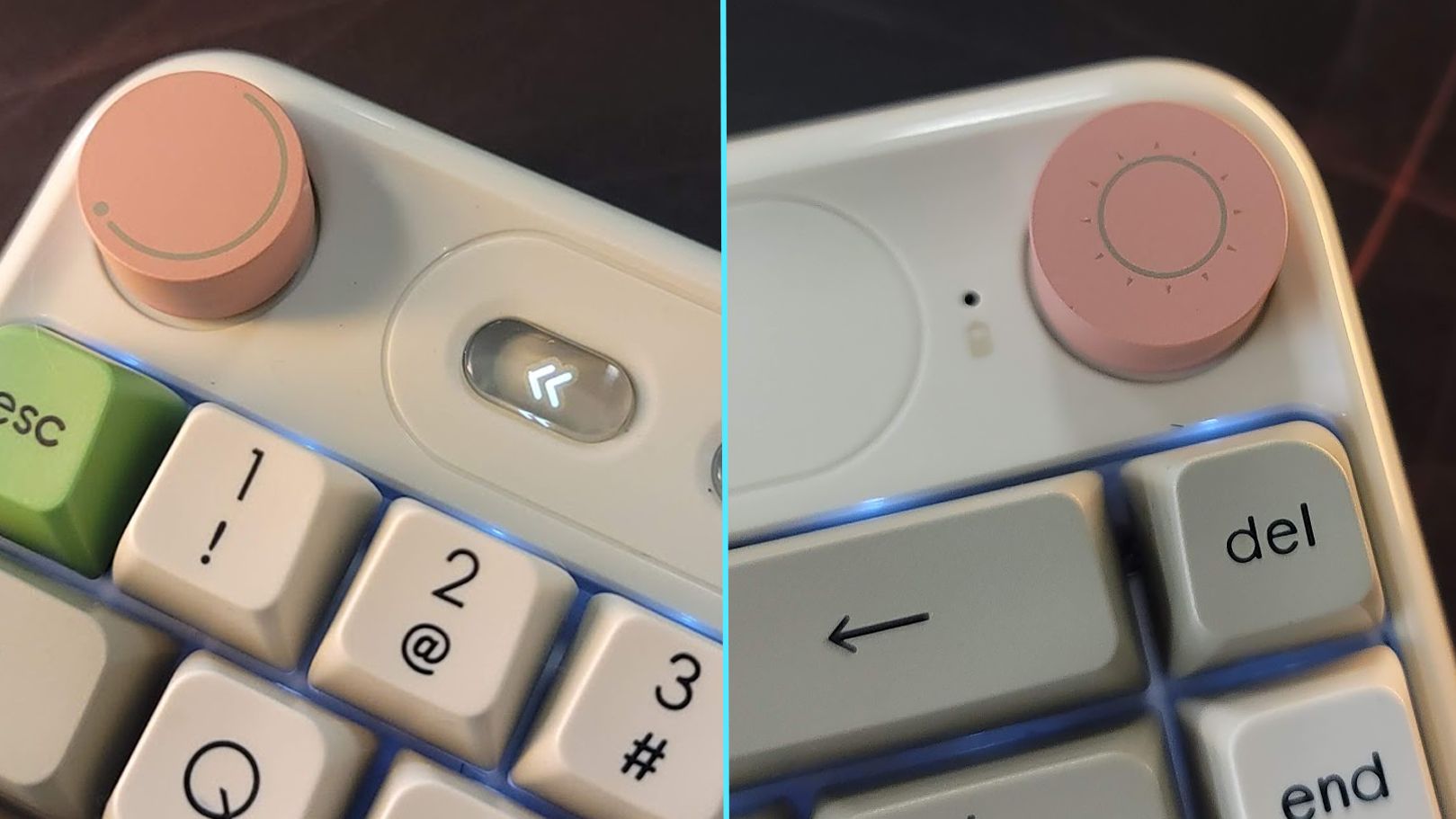 One of the more unique qualities the B21 brings to the table is its two control knobs. There is one each for the left and right corner. The left controls volume and the right controls the mode and brightness of the backlighting. These are each clickable to mute or swap modes. They’re notched for tactile adjustment. I usually like smooth rotary knobs but this is useful for volume especially to dial in your sound. It adjusts the volume in two-step increments, so you don’t get any big jumps.

Finally, in its biggest concession to modern demands, the keyboard supports both wired and wireless connectivity. It can connect over USB but also features support for Bluetooth 5.0 and has a big 4,000 mAh battery. Connecting to my phone and laptop was as easy as holding the button to enter pairing mode and then finding the B21 on either device. After it connected once, it stored those connections in onboard memory to quickly pair again. I was also happy to see that it could quickly hotswap between devices just by pressing each profile button.

I’ve been using the B21 for about a week and like it! The SA profile keycaps won’t be for everyone since they’re quite tall but one thing that’s proved true in the enthusiast community is that those who like it really like it. They make an excellent fit for a retro keyboard. Not only do they look and feel appropriate for the overall vibe this keyboard is going for but they also have a unique, extra clacky sound due to their larger size. I count myself among the camp that enjoys SA keycaps and really enjoyed using them here.

Typing on the B21 was quite nice. Because of the keycaps, it was a bit louder than I’m used to on my usual daily driver, but felt satisfying and responsive. The MX Reds in my sample were a bit lighter than I was used to but the high profile of the keycaps made typos less frequent than I was expecting. The clackiness of the SA keycaps also made typing fast more fun but probably less of a fit for a crowded work environment. Just imagine clicky switches! The stabilizers also came lubed from the factory, which is a nice touch. They’re not quite as silenced as the Epomaker GK96S or GK68XS, so I added a touch more lube to the backspace key, but were overall an improvement over most gaming keyboards. 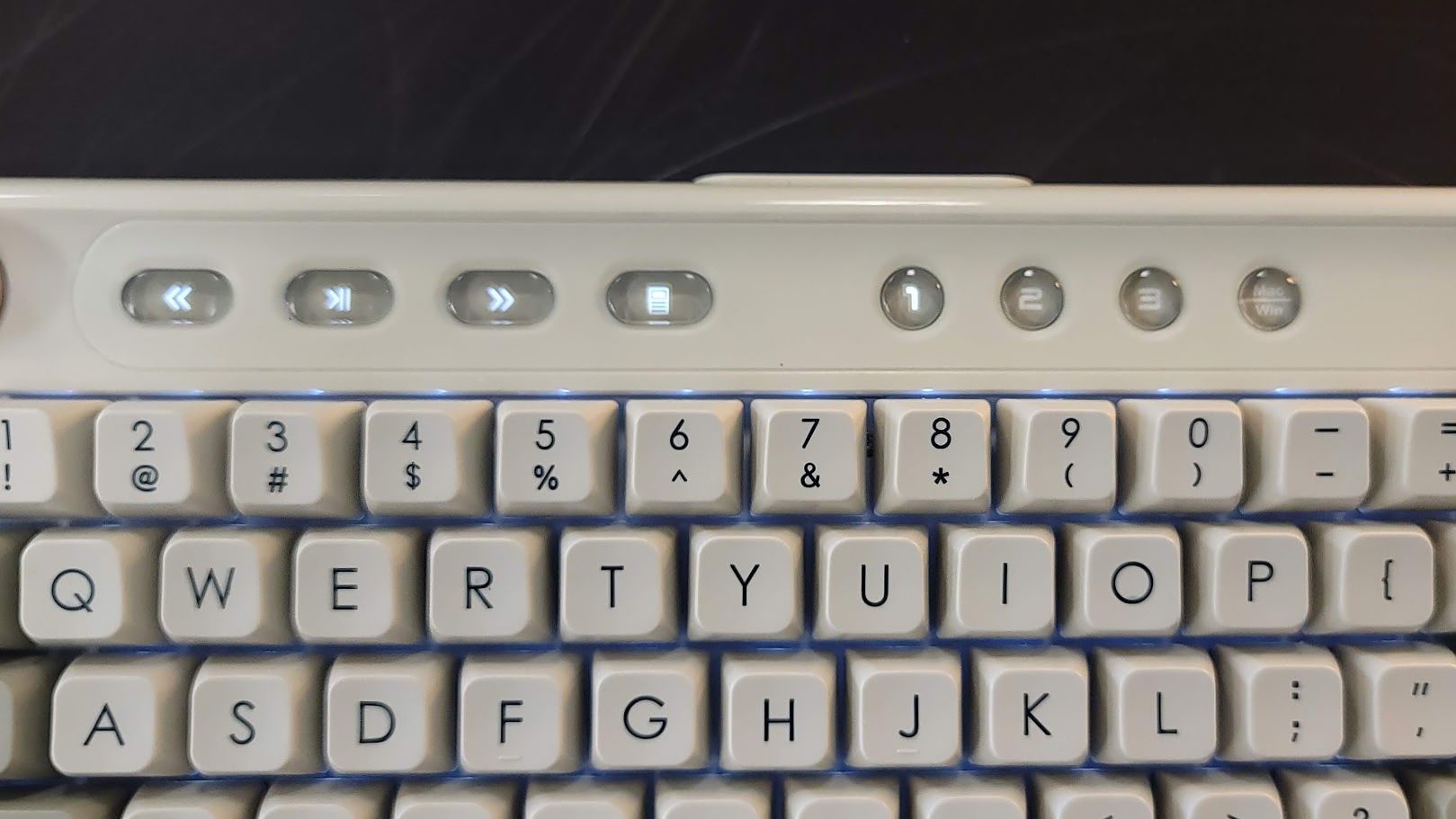 The layout also worked well. 65-percent designs are an excellent middle ground between size and functionality, which is why it's one of the most popular layouts in the enthusiast community. The choice of keys along the right side covered my personal most-used keys with the sole exception of the Home button. I also liked the feel and placement of the knobs, though they'll become much more useful with the ability to program them. As it is, they're a nice addition but feel like they could be more.

Epomaker tells me that software is in the works but it wasn’t ready with my pre-release sample. I’ll be happy to see it arrive because I would love to add more secondary functions to different keys. As of this writing, the Fn key can only be used to access the function keys through the number row but other functions, like Print Screen, didn’t have a keymap. Once that’s in place, it should be easy to map any keys from a standard TKL that aren’t present here, but we’ll of course have to wait and see.

The Epomaker B21 is a unique and interesting keyboard, which is getting harder and harder to say these days. Rather than lean on typewriter-style keys and calling it a day, Epomaker went another direction and delivered a board that feels much more vintage without forcing you to sacrifice modern amenities like Bluetooth connectivity or backlighting. The design won’t be for everyone but this is an unmistakably solid board that’s well worth a closer look.

If this sounds like a keyboard you may be interested in, the crowdfunding campaign went live on IndieGoGo this morning. Read through the campaign and its terms and conditions here.

The product described in this article was provided by the manufacturer for evaluation purposes.
8.5Great
Pros
Cons
Tags
Mechanical Keyboards
crowdfunding
Epomaker