Epomaker is no stranger to the enthusiast and gaming keyboard scenes and has crowd-funded several of its boards with great success. The AK84 takes the same formula that made each of its prior keyboards exciting and applies it to a new, more accessible form factor. That means dual-mode wireless connectivity, hot-swappable switches, dye-sublimated PBT keycaps, full RGB backlighting, programmability, and a solid price point, but this time with the 75-percent form factor. If you’ve been on the fence about compact keyboards, unsure if you can live without your arrow keys or function row, this might be the layout you’ve been waiting for.  The keyboard is available to back on Kickstarter now.

Starting at $69 ($79 for PBT), it’s available in three different case styles, from CNC-topped, to full aluminum, to frosted acrylic to really show off the RGB at different support levels. Every user that backs on Kickstarter is also guaranteed to receive Epomaker’s new doubleshot silicone keycaps, which have a unique feel and sound. It’s certainly a full package to begin at $69. Is there a catch you should be wary of? Let’s take a closer look and find out. 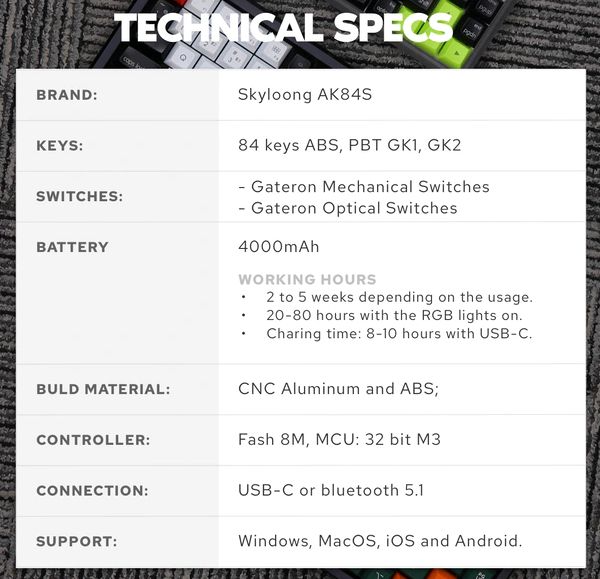 Facebook has been spying on me. Before even hearing about this board coming down the pipeline, Facebook began serving me ads about the upcoming Kickstarter campaign. Right away, it caught my eye with the 75-percent layout. In terms of usability, it’s one of the best layouts there is in compact keyboards and an excellent middle-ground for users who may be compelled by a smaller keyboard but not ready to sacrifice important keys. 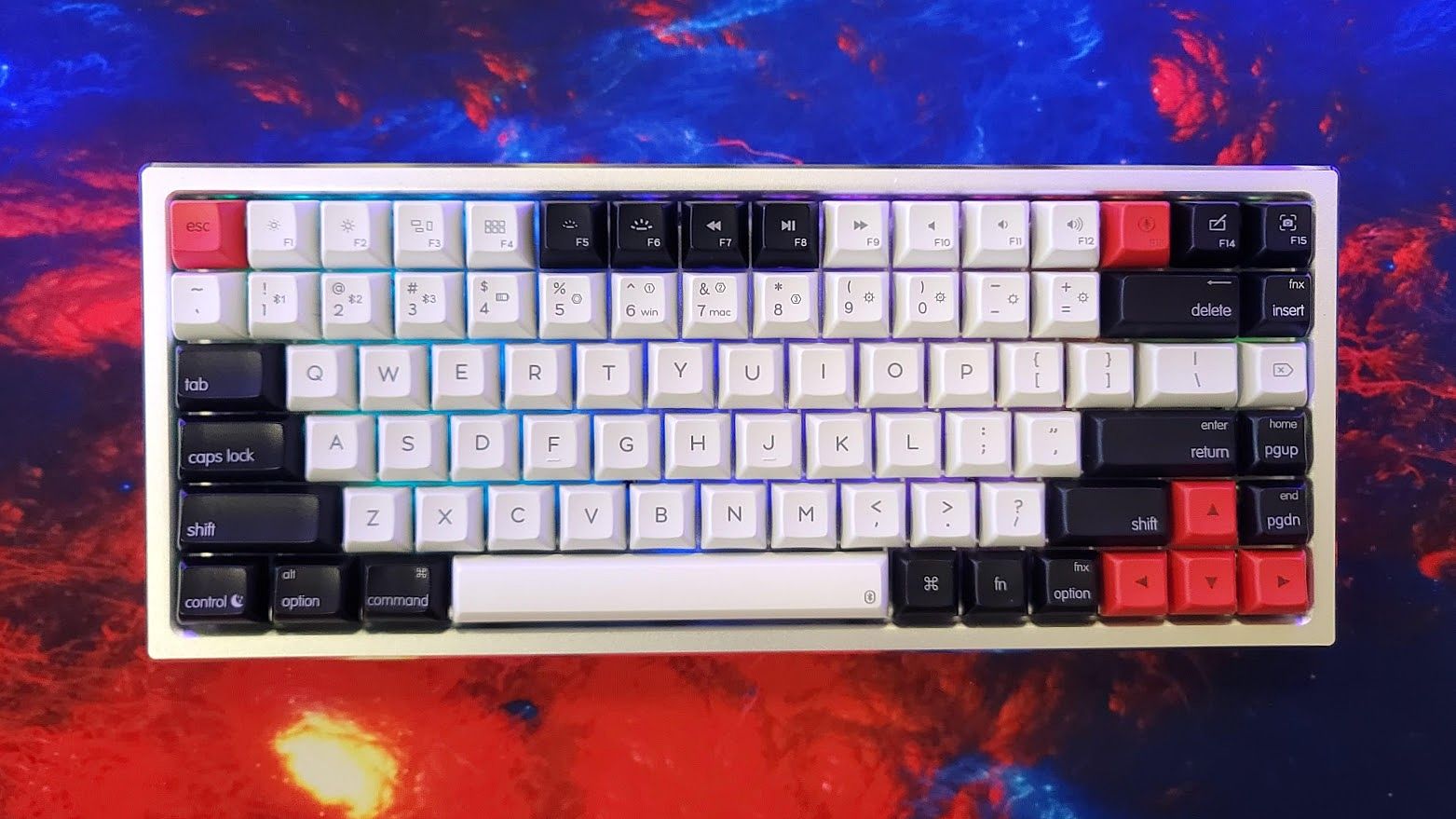 The 75-percent layout attempts to make the best of both worlds between functionality and space savings. It’s only one row column wider than a standard 60-percent like the Ducky One 2 Mini but taller in order to accommodate a full function row. For that additional size, the AK84 features F1-F15 (Scroll Lock, Pause, and Print Screen make up F13-F15 on Windows), dedicated arrow keys, and a column of navigation and editing buttons that include insert, delete, page up, and page down (home and end with Fn held). It’s an incredibly functional layout that doesn’t demand much in the way of sacrifices, which is why it’s also the popular layout for 15-inch gaming laptops.

Like the GK96S that came before it, the AK84 also features native Mac support. In fact, the Mac keycaps come pre-installed on the board. You can easily swap between Windows, Mac, and a custom layout by pressing Fn+6, 7, or 8. When in Mac mode, you’ll also have access to your usual secondary Mac commands to launch the Dashboard or Mission Control, as well as control screen and keyboard brightness with Fn+F1-F6. The keyboard doesn’t have dedicated media controls, but Fn+F7-F12 will control your media and adjust volume on both operating systems.

The AK84 will be available in three case variants, each scaling up in price. The version I was sent was the $79 and $89 optical and mechanical variants which feature a plastic case with a CNC-milled aluminum top and PBT GK1 keycaps. It’s also available in a full aluminum case, as well as a translucent frosted acrylic so the entire keyboard lights up in full RGB. The plastic/CNC version integrates the plate with the top half of the case. The majority of the material is sand blasted but the edges are angled and polished to a mirror finish. It looks good and is more resistant to scratching than Epomaker’s other keyboards. 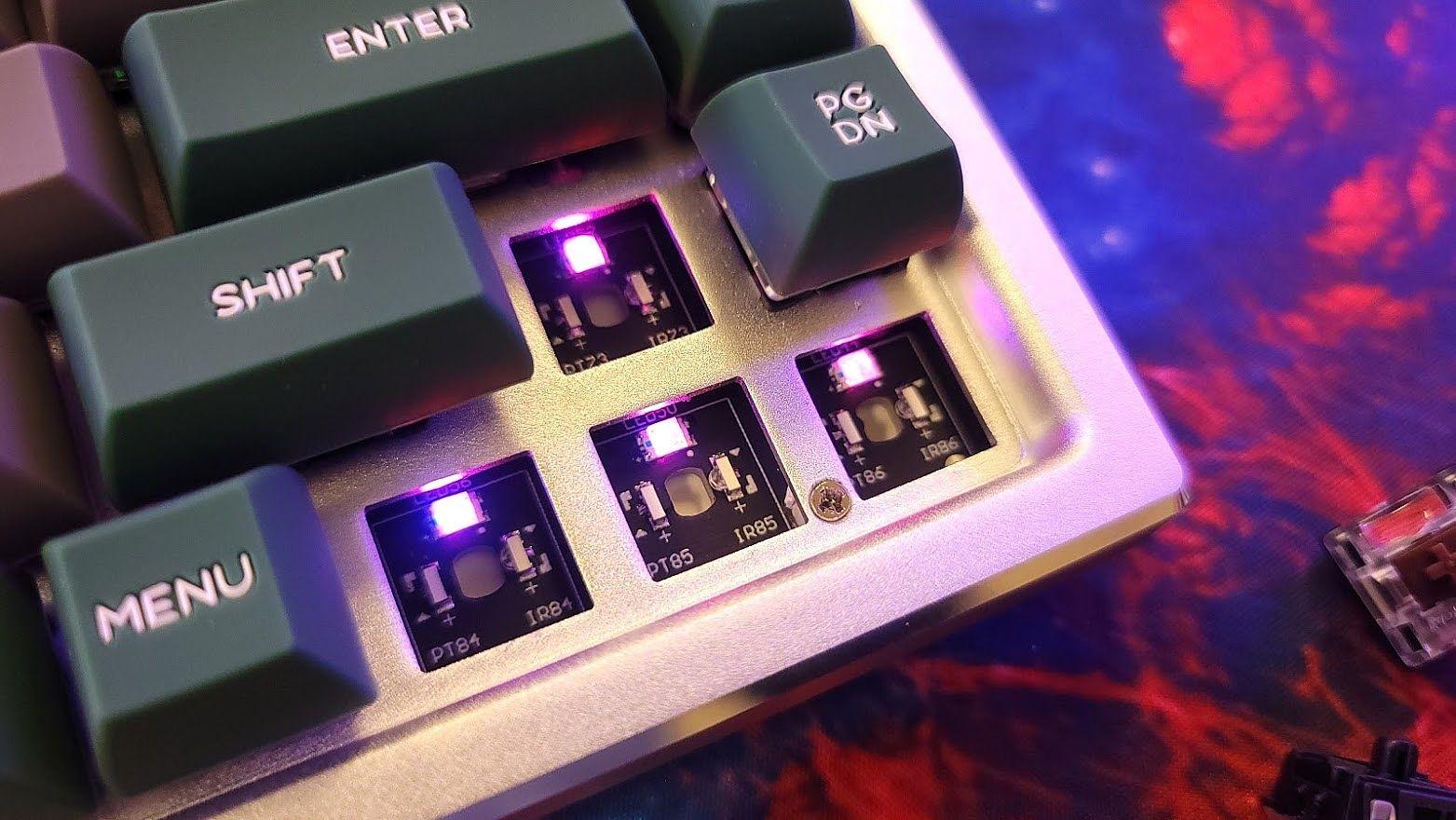 The AK84 is a hot-swappable keyboard, which means you can pull switches out and change them without breaking out your soldering iron. It’s also available with your choice of optical or mechanical switches. This presents you with quite a few choices right from the get-go, but I would recommend going for mechanical switches. I was able to try both and the keyboard sounds much better with mechanical switches due to the reduced spring noise. They’re also more stable due to the additional contact pins; opticals only have the large fitting pin. More importantly, opting for the mechanical version also means you’ll have a huge array of choices should you ever want to try new switches in the future (one of the most fun parts of the hobby, in my opinion). Optical switches offer faster response time due to the lack of debounce delay and a higher lifespan overall typically, but there are fewer options available currently. Available pre-installed are Gateron Blue, Black, Brown, Red, and Yellow options in both mechanical and optical varieties.

The keyboard comes with a great set of keycaps. Like the GK96S, we see the return of Epomaker’s GK1 profile PBT keycaps. They’re approximately the same height as a standard set of keycaps but are more spherical and sculpted, making them more comfortable to use. That might sound strange if you’ve never tried a spherical keycap before but it’s true. GK1 ‘caps are a marriage between OEM and Cherry profile and the towering SA profile keycaps popular on old-school terminals. The GK1s are thick-walled and dye-sublimated so the legends will never fade. The higher density of PBT plastic also prevents shining over time. In five years, these keycaps should look exactly as they do on the day you purchased them. An ABS set, like those found on most gaming keyboards, will be shiny and wearing its age on its sleeve.

In addition to switches and keycaps, the AK84 is also programmable for lighting and will soon offer support for remapping the layout and macros. Like most RGB keyboards, it comes with an array of preset lighting options that include rainbow waves, spirals, reactive typing, and breathe effects. The board is currently being built to support to same software suite as Epomaker’s prior GK keyboards, which will allow you create custom lighting schemes, remap keys across multiple layers, and record macros to trigger in-game. This isn’t complete yet, so I wasn’t able to test it for myself but support is planned for launch.

Typing on the keyboard feels good. I conducted most of my testing using a mix of Gateron Brown optical switches and Gateron Red mechanical switches. Both feel good, but the mechanical version feels slightly more solid while typing, likely due to the additional two contact pins lending support. For the optical version, swapping to optical Silent Black made a tremendous difference and absolutely enhanced the experience overall. The damping effect of the silenced switches adds a layer of cushioning that adds a bit of substance.

The stabilizers in this keyboard are alright but did have some rattle out of the box on the optical version. The mechanical version had much less, so it’s possible this is a result of using a pre-production version of the keyboard. Regardless of which version you choose, I always recommend removing the stabilizers and adding a touch of dielectric grease to the wires. The hand-touch of lubing in this way is almost always better than what comes out of the factory and is one of the easiest mods you can do. Since the keyboard is hot-swappable, there’s no de-soldering. You just pull the switch and every stabilizer can be easily removed from the plate in just a few minutes.

One of the bigger surprises that came with this board was the additional set of "doubleshot" silicone keycaps, an add-on that will be delivered to anyone who backs the Kickstarter campaign. These keycaps feature a tall spherical profile similar to SA. Unlike normal caps, though, they feature a plastic frame and a rubber external sleeve.These sleeves can be removed from the plastic frame in seconds but once they’re in place they feel just as stable as any other keycap but much softer under the finger. The rubber edges also add a nice damping effect to typing which I found I liked better than even the normal GK1s. Epomaker says it uses a unique doubleshot molding process so the legends will never fade but I can’t speak to long-term use. I really enjoyed the couple of weeks I spent typing on them and only put the original back on to take the pictures for this review! 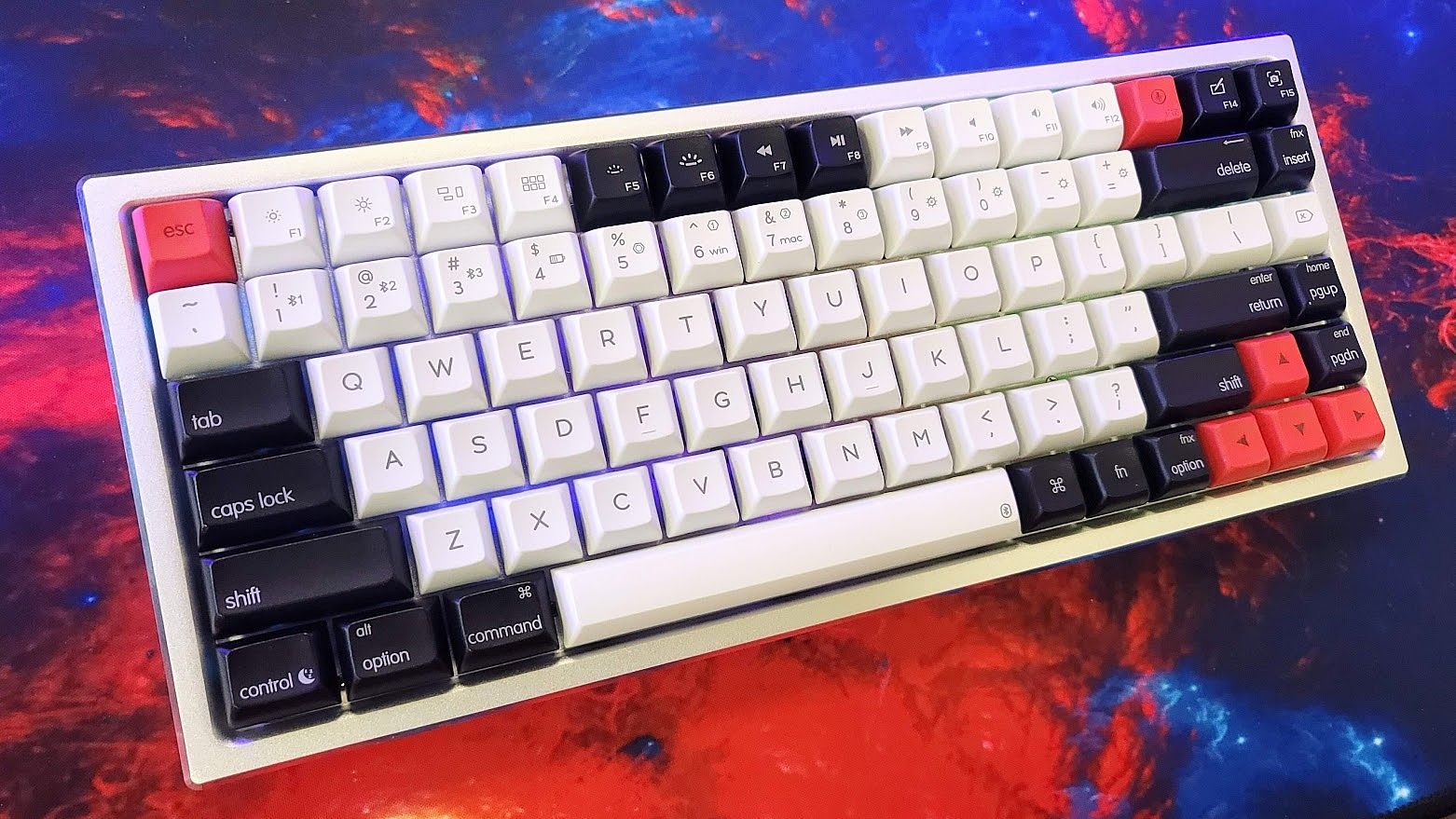 Overall, the AK84 is a solid keyboard. At $79 for the basic version with PBT keycaps, it’s an affordable onramp to the world of enthusiast mechanical keyboards. The optical version was a bit too noisy for my taste, but the mechanical version feels and sounds just as good as Epomaker’s other keyboards and perhaps a bit better due to the aluminum top. If you take the time to do a couple of basic mods, you’ll have an even better keyboard for a very reasonable price. The AK84 is another solid entry from Epomaker at one of the best prices you’ll find for a keyboard of this caliber. Find out more at the Kickstarter page, available here.

The product described in this article was provided by the manufacturer for evaluation purposes.
8.5Great
Pros
Cons
Tags
Mechanical Keyboards
kickstarter
Epomaker