A webcam can be a fickle thing. While for many people a simple integrated cam is fine enough for the occasional work Zoom call or Teams interview, for gamers, especially those who have streaming aspirations, it can be a real struggle to find just the right hardware for the job. With myriad options out there ranging from low-cost USB webcams to utilizing high-end mirrorless DSLR cameras as a webcam nowadays, finding something that can give the type of functionality of the higher end camera without the cost is difficult. Elgato, however, aims to fill a void in the high-end USB webcam market with its Elgato Facecam. But does it do enough to justify its $200 price tag?

Elgato has packaging down to a science. The Elgato Facecam arrived in the same sleek blue box all Elgato products find themselves in nowadays, with the packaging itself not allowing for any wasted space or materials. Elgato states that they are trying to be 100% plastic-free with their packaging, and it shows in how every Elgato product is so consciously packaged now. I do appreciate the minimalistic design of Elgato’s packaging myself, as it less to recycle if you go that route – or if you’re like me and you annoy your household by keeping every single box you receive known to man it at least tucks away nicely on the office shelf.

While the camera itself is sleek and shares the minimalistic design of its packaging, it is a bit larger than most other webcams I’ve used in the past, but not overly so. Compared to the Razer Kiyo which adorned my monitor previously, the webcam has a little bit of a larger footprint, especially deeper, even without the Kiyo’s built-in ring light. However, it doesn’t look out of place. In fact, it looks like it belongs a little bit more than my Kiyo, personally. 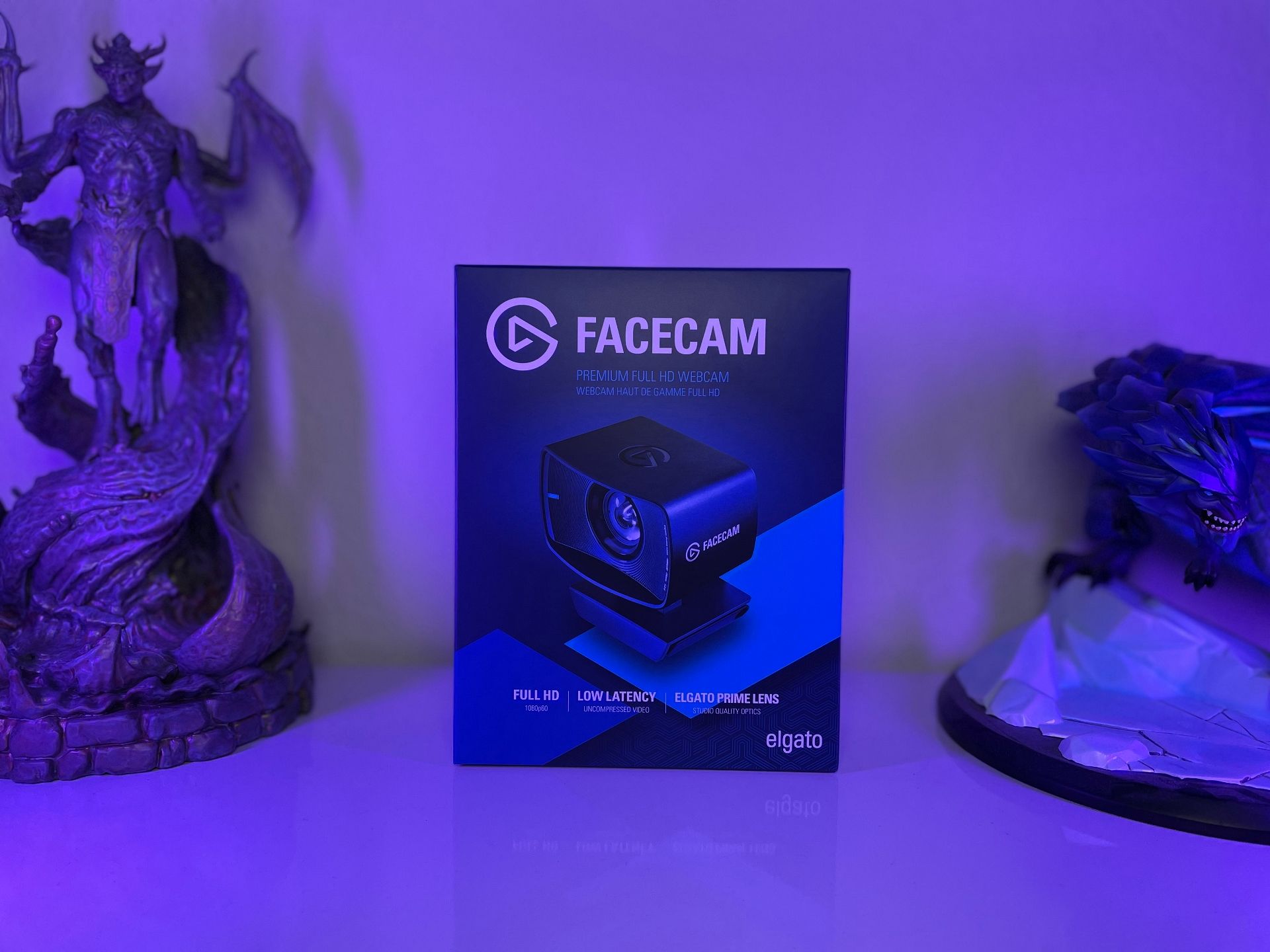 The Facecam also comes with a lens cap, though for the most part, I’ve left this off the camera while using my PC. It’s not that I don’t care about my privacy – I do, but I just can’t be bothered to put it back on every time I’m done streaming or on a video call with a friend or in an interview. But I do appreciate that it comes with this, and I like that it really isn’t hard to place back on the camera – simply snap it in place and move on with your day.

I also appreciate the length of the USB-C cable the Facecam comes with. While many of us are working from home now thanks to the pandemic, quite a few of us have also invested in standing desks. My biggest complaint of every other webcam I’ve used is the cable length not being long enough to accommodate a standing desk. The Facecam’s cable is perfect suited to this task, and the fact that it’s also detachable allows for even longer cables should I need to move around my setup (or if I’m trying to create a dual camera set up for a stream and need to reposition it across a room, for example).

The Elgato Facecam uses its own prime lens, an all-glass lens that the company states is designed to improve transmittance, prevent lens flare, reduce chromatic aberration, and more. The lens itself is backed by Sony’s STARVIS CMOS sensor, which is designed to capture as much detail with as little noise in the image as possible. And like with most Elgato products nowadays, the camera itself houses its own internal flash memory, allowing you to save your settings directly to the camera itself, meaning if you need to move your camera to a different set up, your ideal camera settings go with you.

The real question is this, though: How good is the actual camera?

The Elgato Facecam has, simply put, one of the best webcam…er…cameras I’ve ever used. In my quest to find the best quality video for my set up I’ve tried a lot of things. From using Elgato’s Cam Link to hook up my old DSLR (which didn’t want to play nice with Elgato’s Cam Link, by the way) to using the Kiyo for the last two years, to even buying a GoPro earlier this year to see if it's capable of being the camera for our streams (Spoiler: It wasn’t.), I’ve wanted something like the Facecam for quite some time now.

The camera itself is a little overexposed out of the box, but thankfully, like all of Elgato’s products, the Facecam comes into its own with the software designed specifically for the product. The Camera Hub software gives some amazing control over the image quality, allowing you to tweak everything from shutter speed, ISO, FOV, and more. The Camera Hub gives some incredible control over the visual look provided by the Elgato Facecam, allowing you to set it exactly the way you need to in order to eke out the best visuals your set up will allow.

As a result, the Facecam is one of the best-looking webcams I’ve ever used. Full stop. While it’s still only 1080p (and honestly for most streamers this is perfectly fine), the amount of control it gives can allow the quality to rival that of some DSLR cameras out there. Being able to adjust things like the white balance or increase the sharpness (or reduce the noise in the picture too) gives such control over the picture that I can’t actually imagine going back to something else down the road.

I also appreciate the incredibly wide FOV on the camera. Sometimes I want to show off my office, my various gaming statues and bottles of Scotch whisky adorning my background while I stream. Sometimes I don’t feel like cleaning my office though and want the focus to be on me while I stream. The incredibly adjustable FOV helps make this possible, and I don’t feel like I lose too much in overall clarity when zooming in close or panning out for the wide shot. 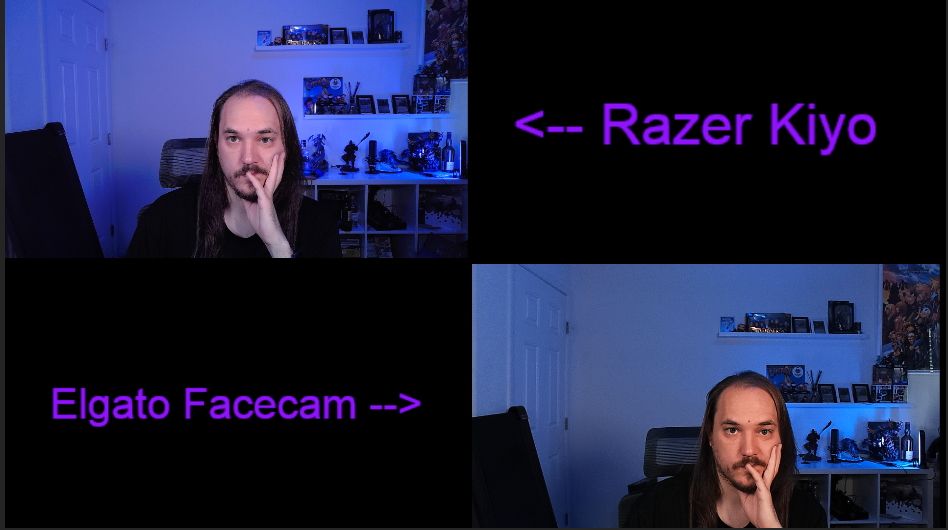 Interestingly enough, though, I do feel the color accuracy of the camera does suffer a little compared to the competitor, though I would take the clarity brought on by the Facecam any day. When testing between the Razer Kiyo and the Facecam, I did notice that the purples in my background came through a bit stronger than on the Elgato itself. It’s not a big deal overall, as the purple in the background is more of an accent than anything (and I could likely boost it with a stronger LED instead of a single Phillips Hue Bar like I have now), I did find it interesting that the less expensive camera gave a more accurate overall image.

However, the camera clarity brought by the Facecam is much better, and I find myself defaulting back to the Elgato when recording or hosting a video call – simply because it’s clearer (and 1080p60 for that matter). 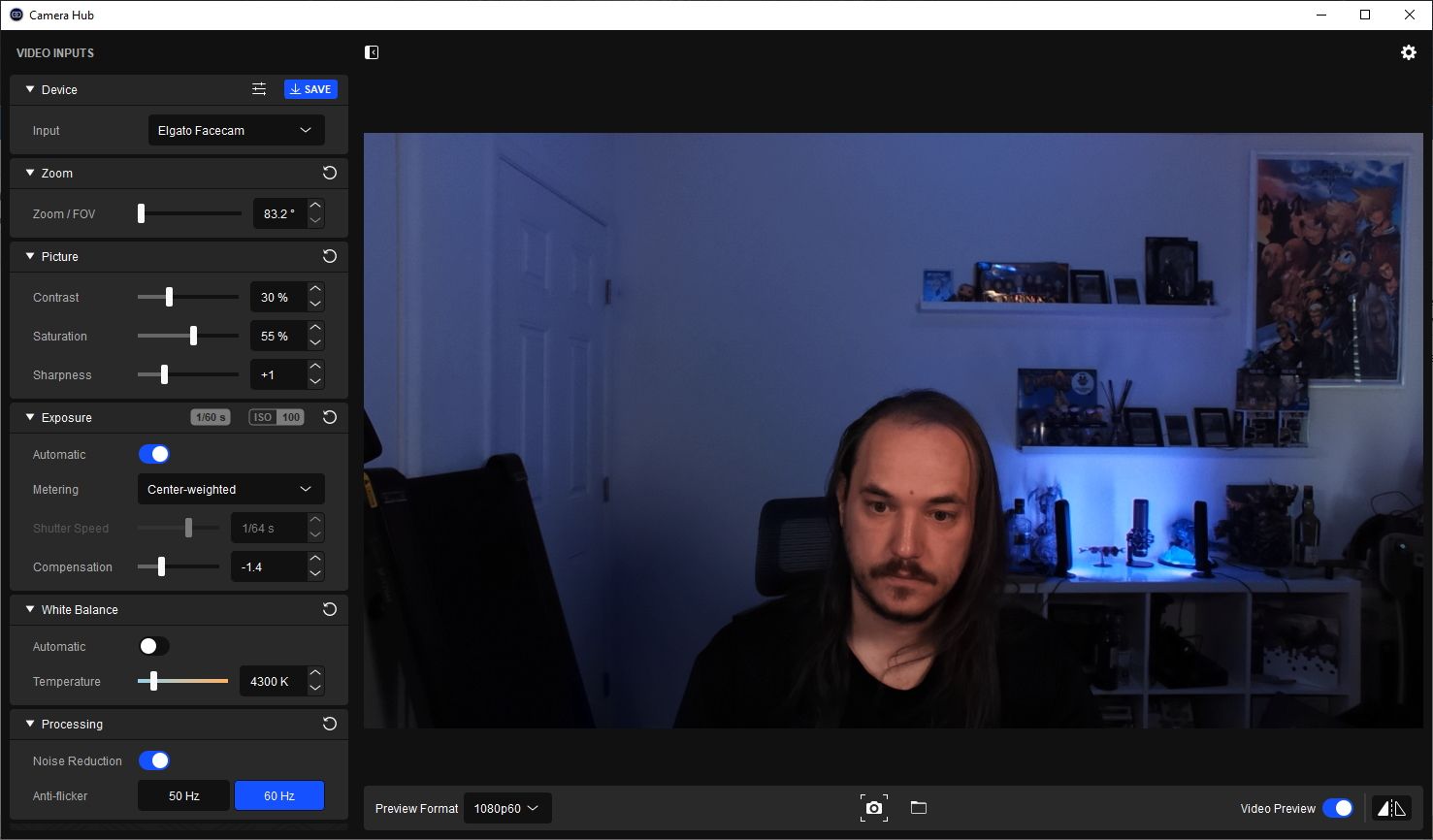 The Facecam also does not come with a built-in microphone like many in the space, allowing for more room in the camera chassis for a better quality lens. This makes perfect sense as well as most people spending $200 on a camera likely have their own dedicated microphone set up, from a USB mic to an XLR input.

The Elgato Facecam is a stellar webcam and should be on anyone’s radar who is seriously planning on upgrading their stream. However, the price might put some people off. I mean, for most streamers the camera is a small box in the corner of their stream – you can sort of get away with a lesser quality lens since you’re not exactly looking for the finest detail in such a small space. 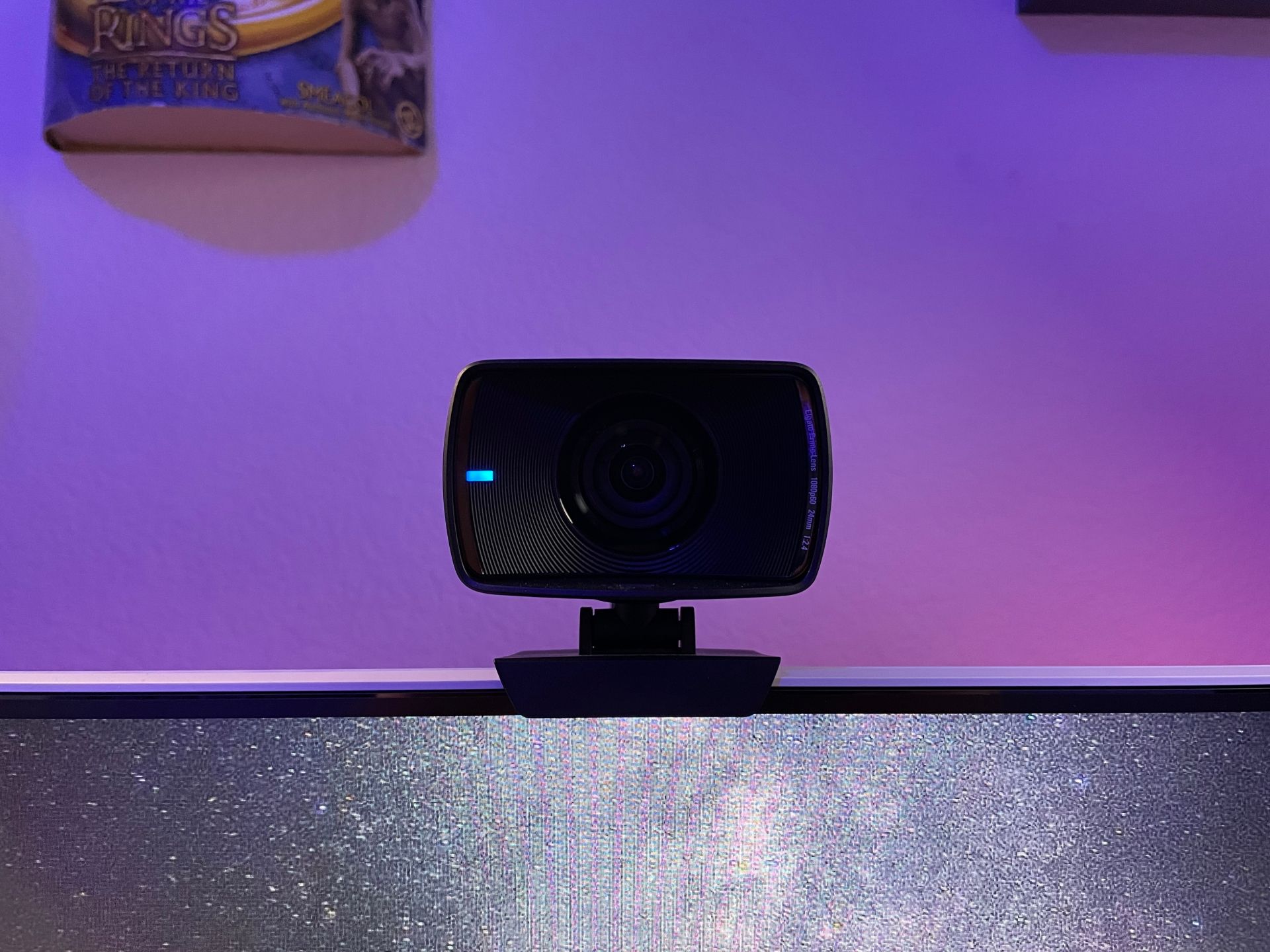 But if the camera is a prominent part of your stream, or you plan on hosting interviews, chat streams, and more where that camera is going to be a focal point, you can’t go wrong with the Elgato Facecam. While the camera itself is great out of the box, the Facecam really comes into its own thanks to the powerful Camera Hub software. And this is a point where Elgato really dominates the peripheral market, I feel. Each of their products really excels thanks to the quality software that comes with it, whether it be the Wave XLR or Wave:3 Microphone, or simply setting up a Stream Deck to control your broadcast. The Camera Hub app makes the Facecam competitive, and it can only get better over time with successive updates and more.

The Elgato Facecam is the best webcam I’ve personally used, full stop. It’s clear, the software is powerful yet easy to learn, and provides so much control and clarity over a stream that I’m not sure I want to go back to my older setups or even invest more into a mirrorless camera to get similar results. The Facecam might be expensive - $200 is not cheap for anyone – but it makes up for that price in quality and ease of use. If you’re looking to upgrade your streaming set up, this is definitely a camera to keep on your radar.