Update 5/19/20: Dygma Lab reached out to us to clarify some misunderstandings present in the original version of this review. We have since gone forward and made the necessary corrections, as well as expanded where necessary. Given the additional information, we fill the score warrants an increase and have updated it accordingly. We want to thank Dygma Lab for taking the time to connect with us and help us dive deeper into this product.

The Dygma Raise may just be the coolest looking split keyboard on the market. That’s certainly how it caught our attention; its unique design and eye-catching underglow just beg to be investigated. It also features a unique layout that appears to be perfect for gamers — no surprise considering the CEO of Dygma also used to be the head coach of Fnatic’s League of Legends team and remains the Director of Esports Performance for Spain’s Movistar Riders. The Raise should be one of the best gaming keyboards on the market with that kind of experience driving its design.

I’ve been following the project for nearly two years and have finally been able to go hands-on. Does it live up to the rich potential it so clearly emanates? 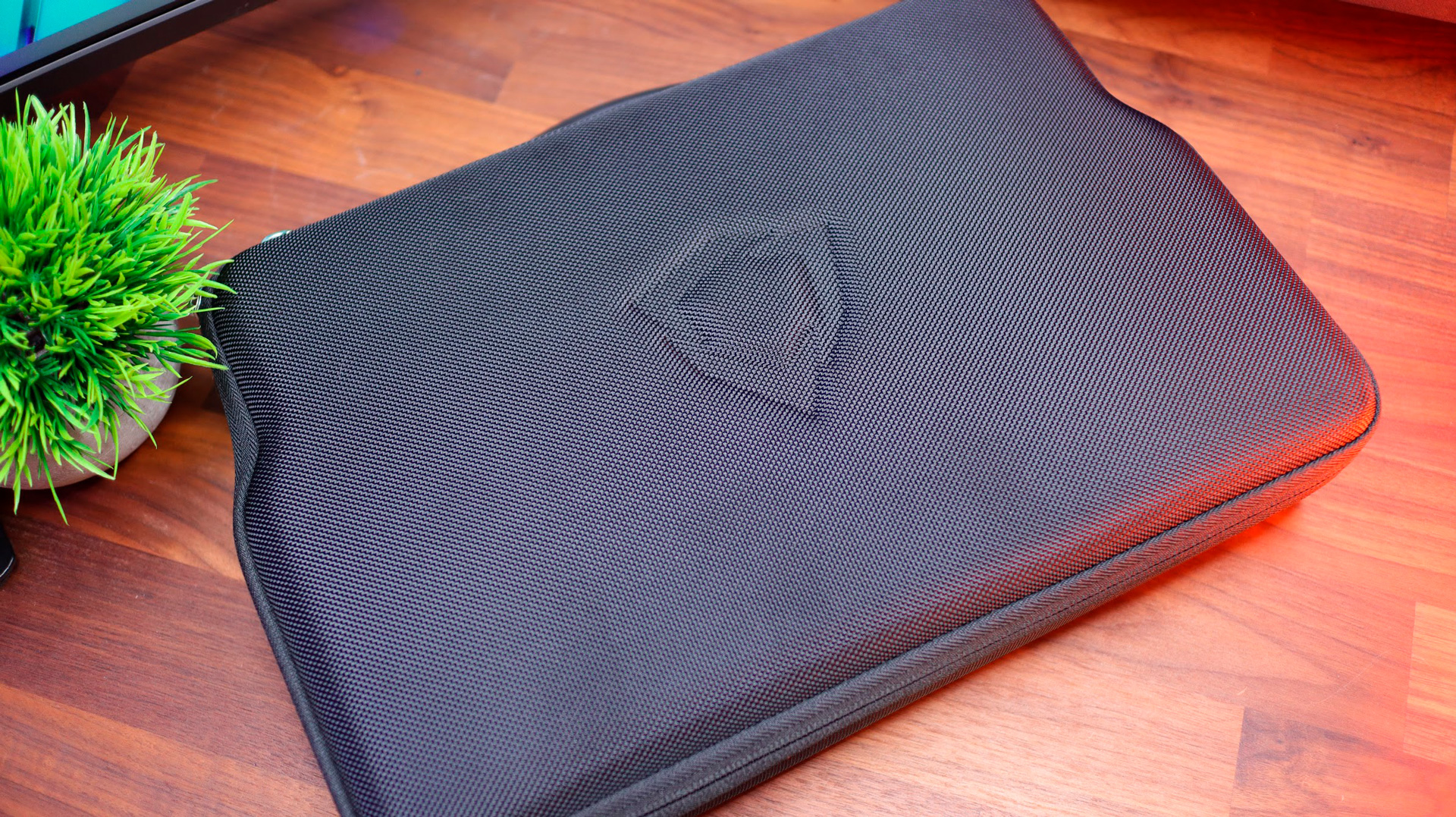 The Dygma Raise is one of the most interesting keyboards to release in years — well, technically. The keyboard is currently available for pre-order as they  complete their second round of production, having delivered their initial batch to their Kickstarter backers in January. The project launched on the crowdfunding platform in December 2017 seeking 83,000 GBP (roughly 103K USD). By the end of their campaign, they had raised more than double their campaign goal, rounding out at 193535 pounds, or $234,570. The level of excitement the Dygma team generated was enough to sustain them through additional years of development and additional private investment. The initial early bird launches pegged delivery in Late 2018 and only in recent months have keyboards really begun shipping to normal consumers.

Was the wait worth it? 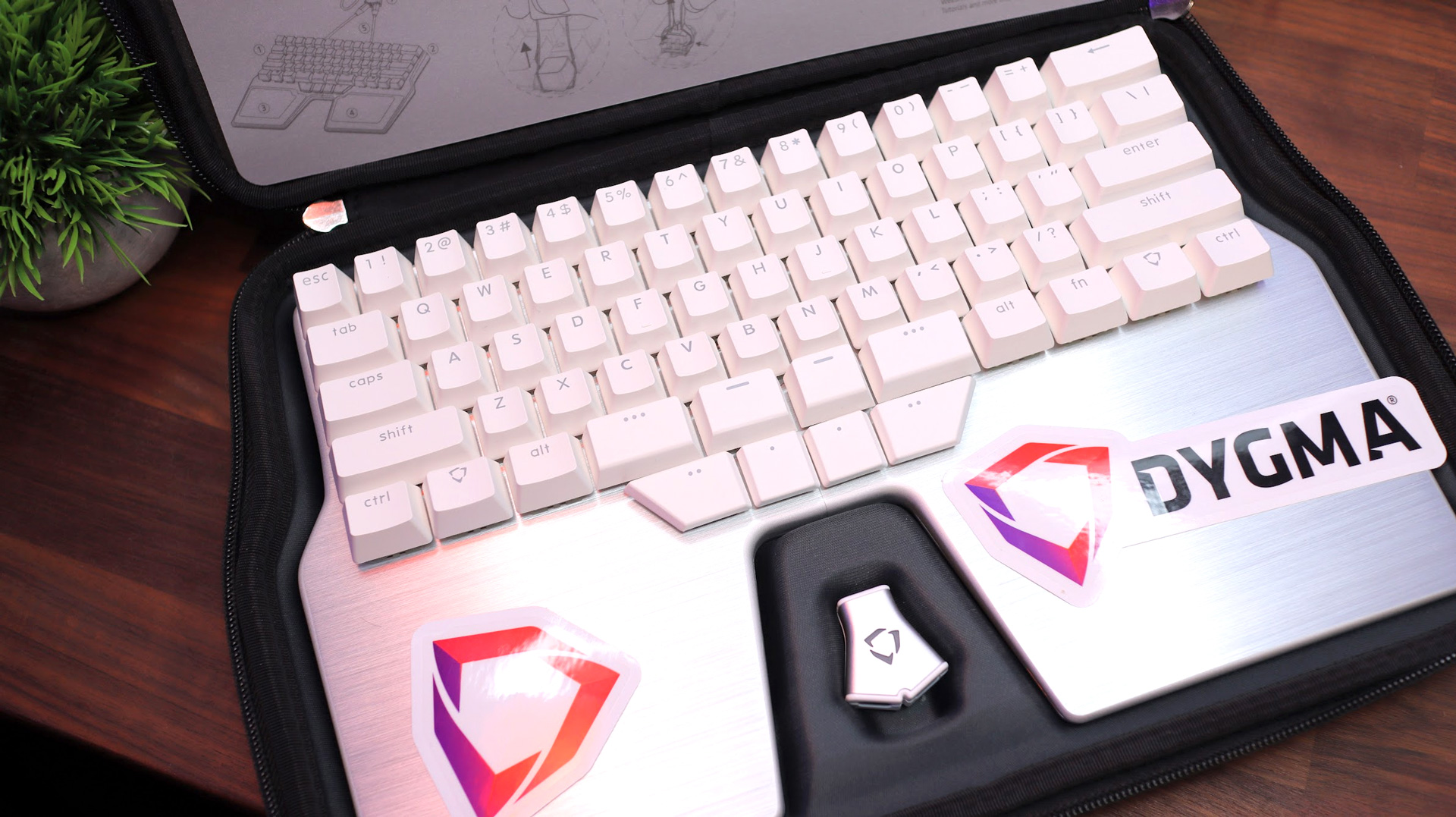 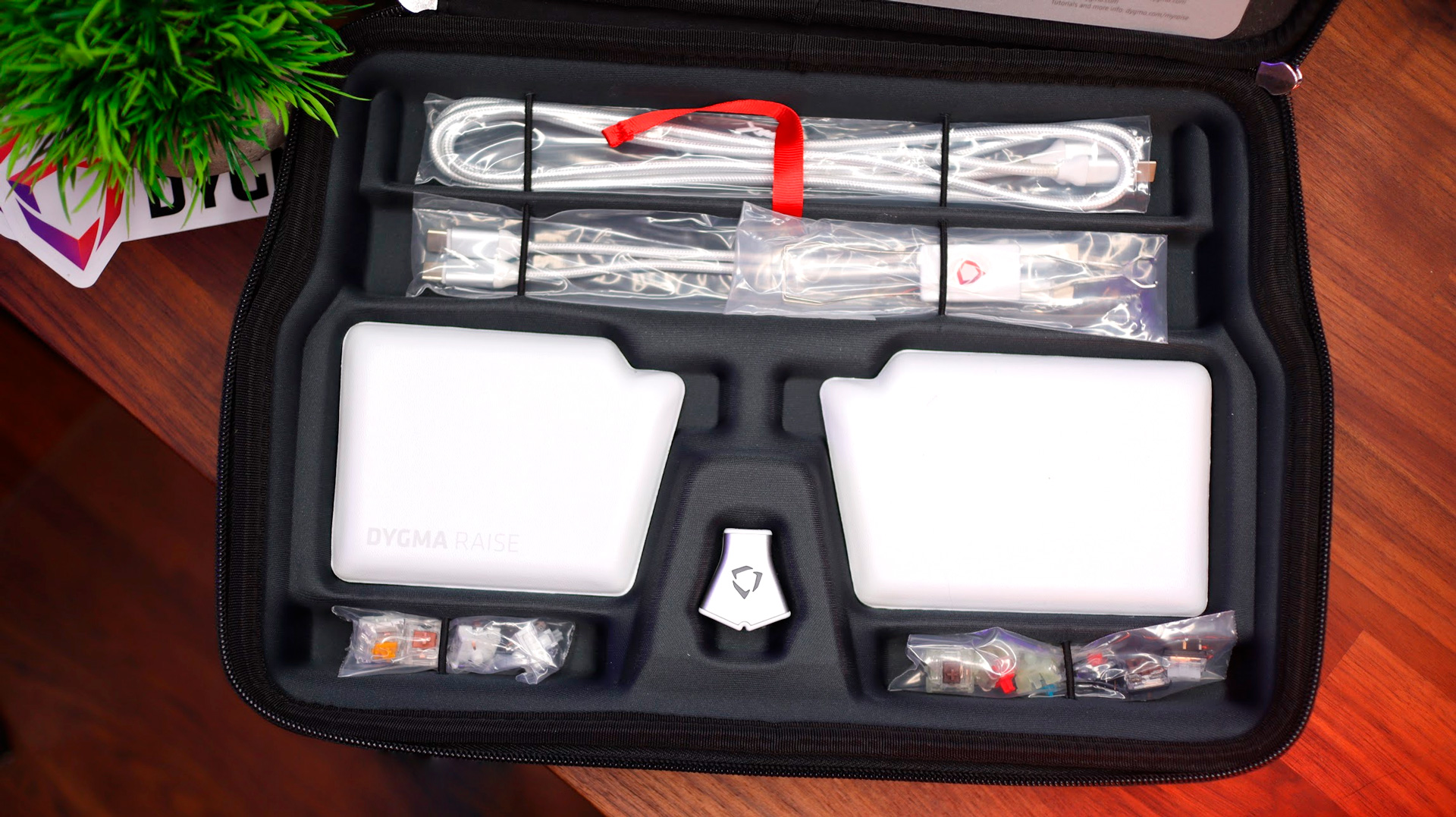 If first impressions are truly everything, then the Raise is an absolute winner. The Dygma team spared no expense with presentation or packaging. Rather than ship in traditional retail packaging, the keyboard ships with a very nice semi-hardback case as pictured above. The keyboard comes on top of the accessories, complete with a couple cool stickers and a nice instruction sheet. Underneath, you’ll find all of the goodies that come with the Raise: two adhesive palm rests with silicone bottoms (they can be removed and washed); custom braided USB Type -C cables for each half; a longer Type-C to Type-A cable to attach to the PC; a stylish adapter, called the Neuron, to join both halves; and a selection of key switches that you can swap in and see if you enjoy.

It’s clear that Dygma aimed to deliver a high-end package, and it doesn’t stop with the accessory bundle. The keyboard itself is also very nice. It features premium backlight doubleshot keycaps made of PBT, so they’ll never shine or have the legends fade away (and are available in seven different languages [Spanish, Japanese, French, German, and Nord are in ABS]). The chassis is also aluminum on the front and mylar on the back, in contrast to most gaming keyboards that only feature an aluminum top plate. Despite being largely metal (there’s a polycarbonate layer to allow the RGB underglow to shine out), it’s also fairly lightweight at 695-grams total. I’m usually a fan of heavier keyboards, but since the Raise uses an ergonomic split, you’ll find yourself moving each half more often, so easy movement is a key design element. 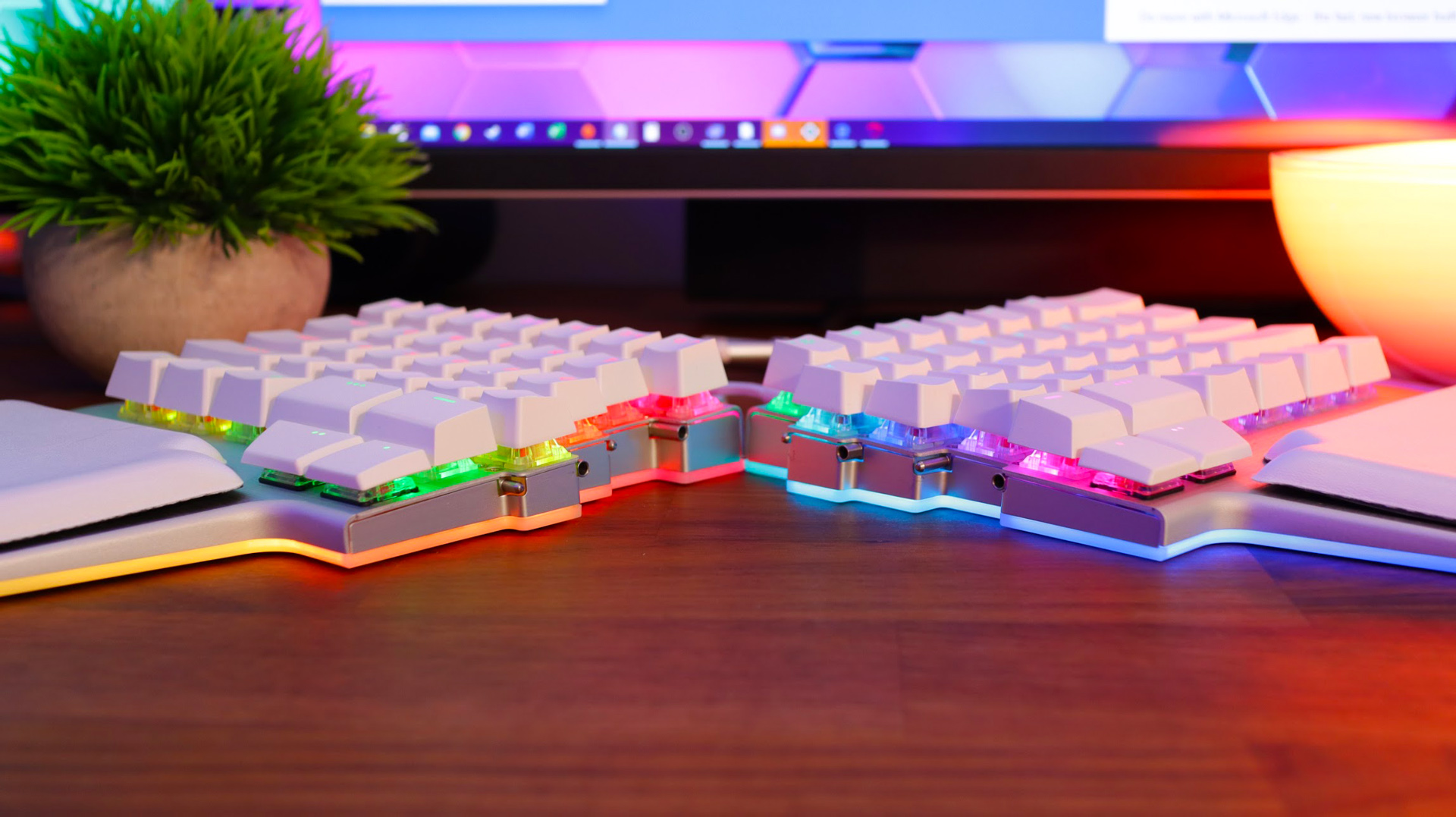 It’s also just cool looking. Like it or not, we live in a time where the appearance of our peripherals matters and the Raise is as eye-catching as they come. Not only does it have RGB backlighting, it has 360 light rings on each half. This is the first split keyboard I’ve ever seen that has such a feature and it lends it a truly unique look. 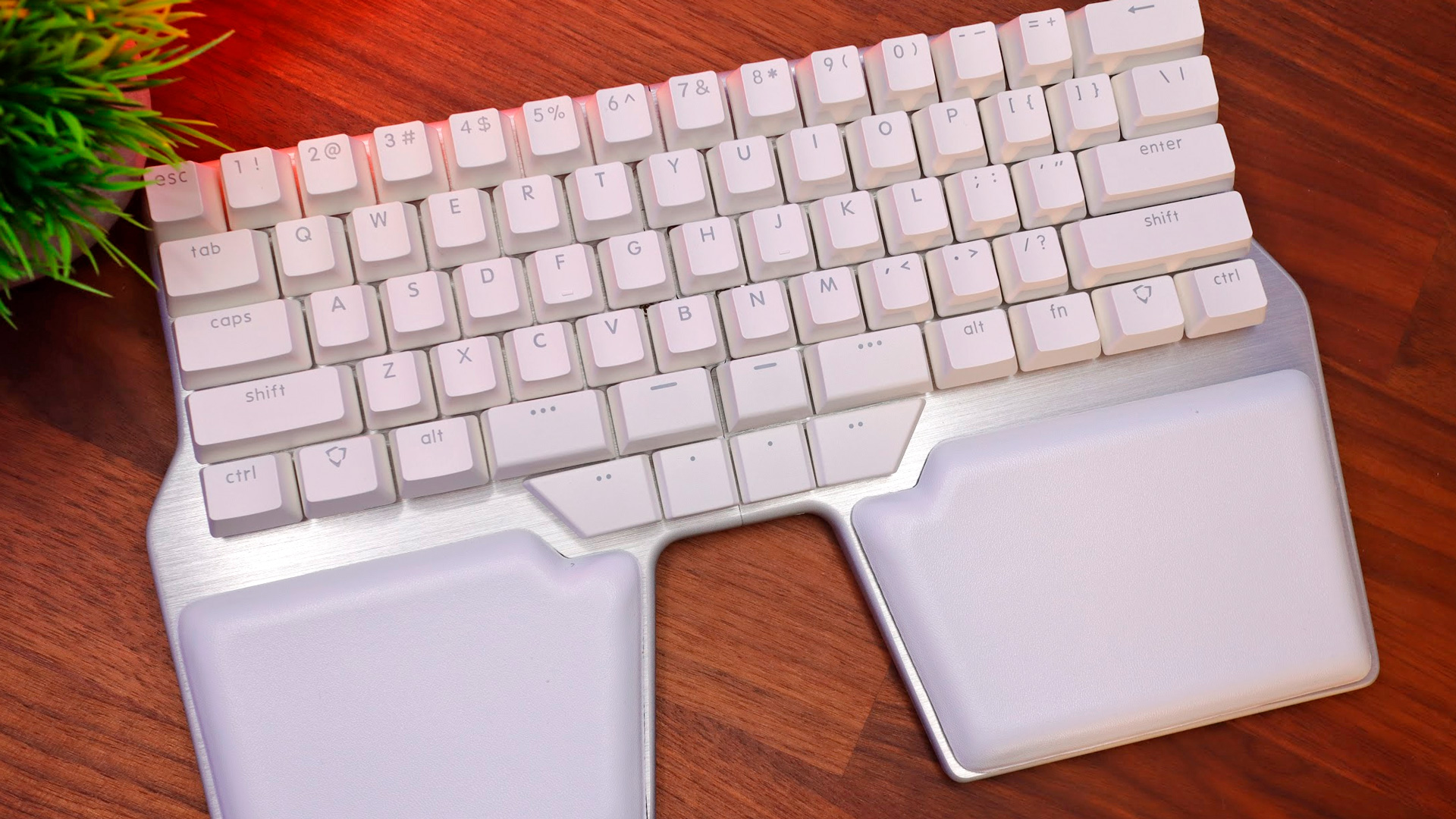 The key feature of the Dygma is clearly the split design and custom layout. As you can tell from the picture above, you don’t have to use the Raise in a split configuration, but doing so allows for much better ergonomics to promote the health of your wrists — especially important for hardcore gamers and eSports athletes. In contrast to many split keyboards, the split here is nearly identical, which made learning to type on it much easier than others where one side is longer than the other. Still, plan a few days for the learning curve.

The split design also has another key benefit. When you’re gaming, you can use a single half as a macro pad. Since the PC recognizes the Raise through its cable adapter and not the keyboard itself, you can unplug either half and use whichever side you like. Usually, you’re forced to use one or the other, like with the Mistel Barocco or Kinesis Freestyle Edge RGB. Being able to trim down to a single half essentially allows the Raise to pull double-duty as a normal keyboard and a macro pad like the Razer Tartarus Pro.

MMO gamers especially will appreciate the thumb cluster. The spacebar has been split into four smaller keys, each customizable, with four additional thumb buttons below that. I was initially worried this would slow me down — the space bar is long for a reason. Or so I thought. As it happens, I found the transition to actually be easier than even learning the split. Watch yourself — when you press the space button, it’s probably with one hand, in the same position every time. You simply set the matching thumb button to “space” and you now have seven additional keys that you can program for every game. 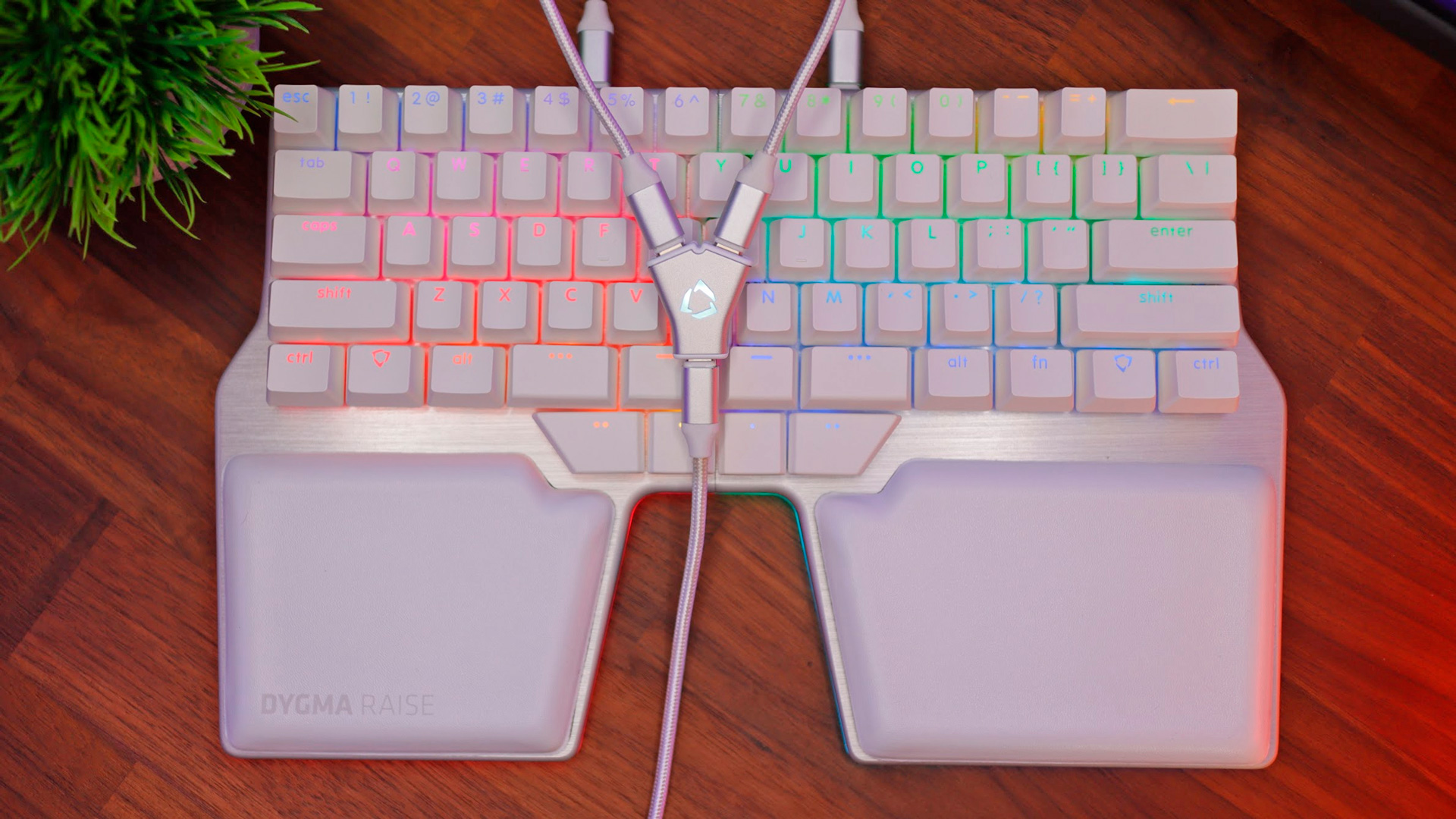 The thumb cluster is also useful to access secondary layers. As you may have noticed, once you remove the thumb buttons, the Raise adopts a traditional 60% design, much like the Ducky One 2 Mini. There are no function buttons, arrow keys, or navigation/editing cluster with this layout. Instead, you access them with key combinations.

Usually, this would require you to hold an Fn button or Caps Lock off to either side, but thanks to the thumb cluster, you don’t need to shift your hands at all. When I need arrows, I press the button right underneath my space. Same thing with every other “missing” key. It’s both intuitive and easy, which makes this keyboard one of the most functional compact keyboards I’ve ever used. 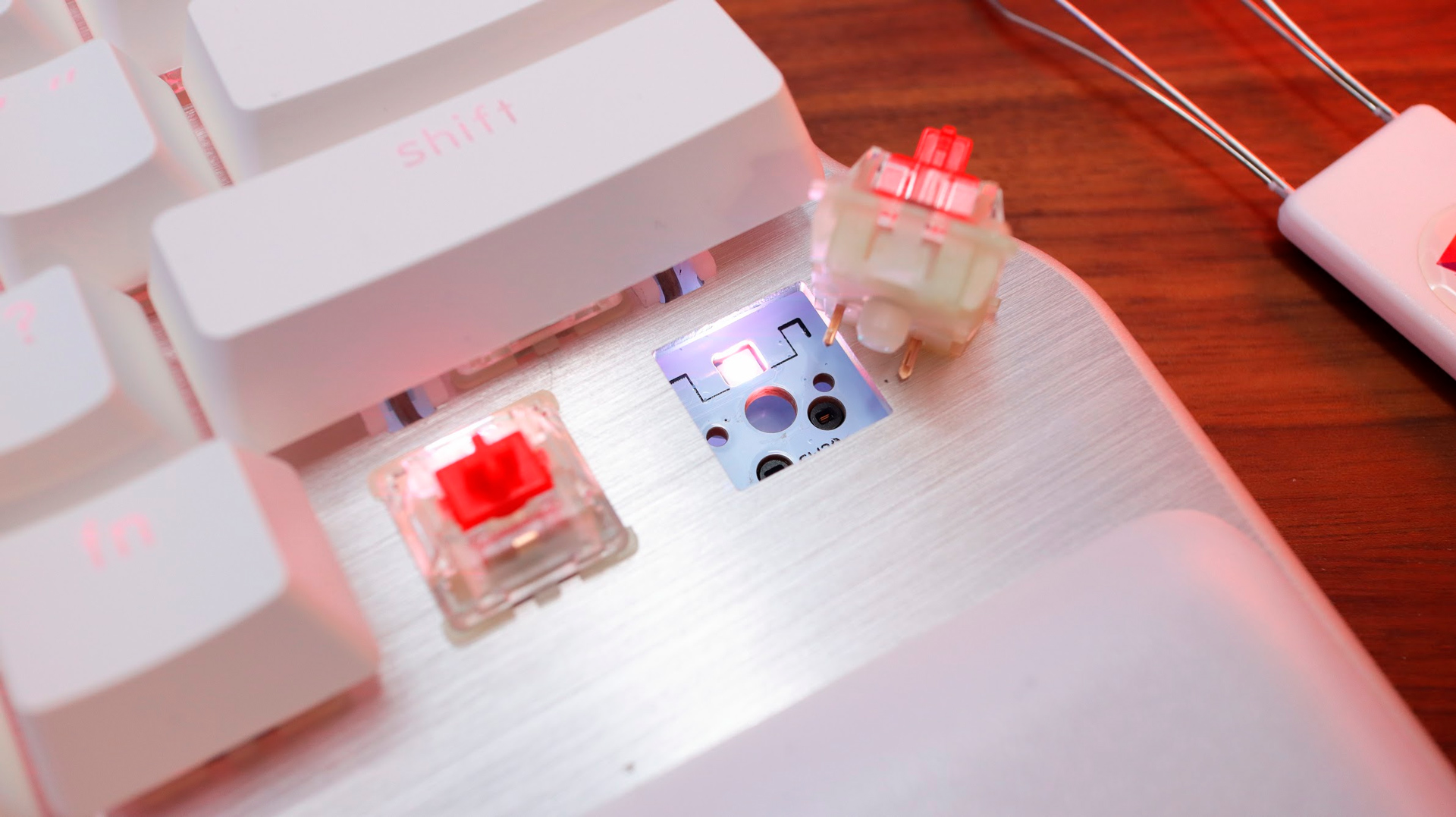 Rounding out the hardware side, we have the hot swappable switches. The model I was sent shipped with Cherry MX Red switches, for a light linear touch. The beauty of hot swaps is that you can literally pull them out and replace them with anything you like. Want to swap out for clicky blues? Pick up a switch pack and change them out. There’s a whole wide world of switches out there for you to experiment with.

The Dygma Raise is a keyboard with a ton of potential. It’s well built, feature packed, unique, and truly offers innovation to benefit gamers. The keyboard is a win, without question.

Where things begin to get rocky is with the Bazecor software, which is currently at version 0.2. As a gaming keyboard, gamers expect a certain level of programmability. The Bazecor software delivers on a purely functional level — at least mostly. You can remap keys, control your lighting, program in as many layers as you like, and then save all of those changes right to the keyboard itself. Once it’s programmed, you won’t need to use Bazecor again, even between machines. 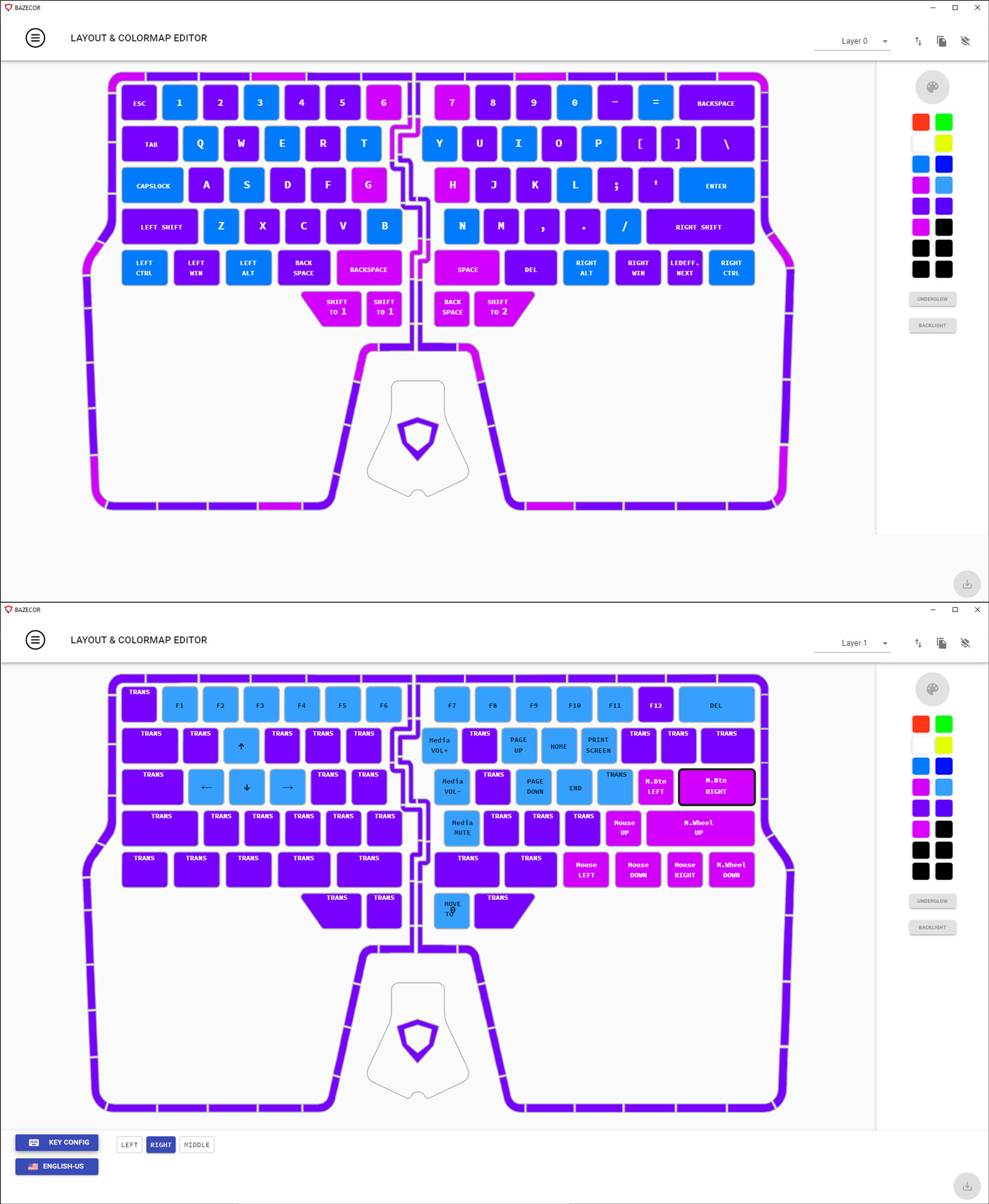 But to say it’s rough around the edges would be an understatement.

Take lighting, for example. The keyboard comes with a few static colors, a slow rainbow wave, one reactive typing mode (red), and a color-shifting breathe. Not a terrible place to start, but not great either. When it comes to customizing those presets, you’re out of luck. You can’t even control the brightness beyond on and off. You CAN change the brightness in the preferences menu. You can set your own static layout, but you’ll be stuck clicking every single key you want to change.

Also, it's pretty clear that the left and right sides aren't in sync: 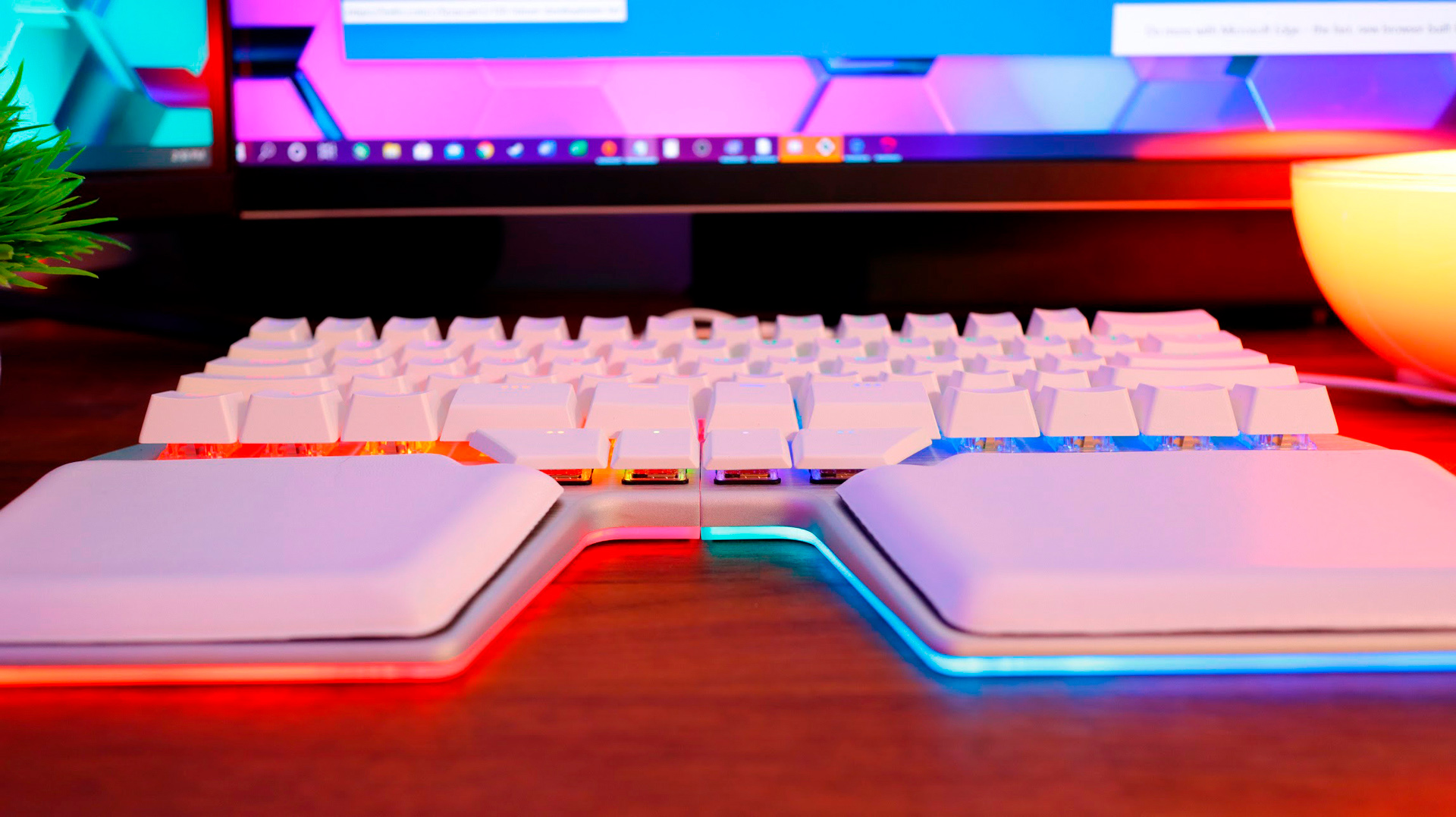 When viewed from the top, it's not bad, but I definitely wish they were a bit more in line. 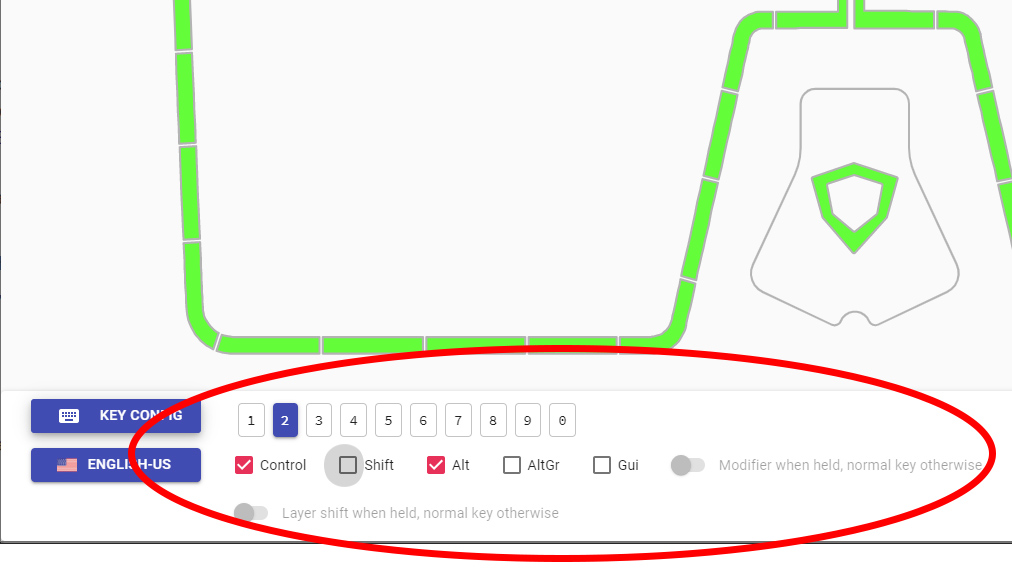 Then there’s programming. Though Dygma advertises macros, they don’t mean what you’re probably imagining. You can’t hit a “record” button a just set a sequence. Here, macro refers to a key combination — at least at this point in time. It’s entirely possible that true macro functionality is coming down the pipeline, Dygma does have a “design the UI/UX for macros” entry on their public development board.  The key combination functionality is rather rich, however, so you can easily program in layers of skills for your favorite MMO. It's also possible to create dual-function keys that perform one function when tapped and another when held.

You can do a lot, currently, to be sure. Being able to swap layers, or trigger modifiers only when held and a normal key when tapped are advanced functions, but it’s honestly very unclear what’s going to work and what’s a placeholder for something still in development. Like mouse movement. There are options for it, you can see it in the big screenshot above, but once they’re saved to the board they didn't work until I updated my firmware, but without Luis from Dygma mentioning this as a possibility, there was no indicator inside the software that this might be necessary.

Bazecor is still very much in development with new features being developed behind the scenes consistently. It's also open-source, so you can develop it yourself if you have the coding skills. The team also recently posted an update with some interesting plans for the future, including user profiles, layer sharing, and more.

Since Bazercor is such a fundamental element to making the most of the Raise, and that element is still in beta, it makes the keyboard itself feel earlier on than it actually is. On a hardware level, it’s great, but with a price tag that approaches three hundred dollars, I would love to see the software suite farther along than it currently is.

At some point, the Dygma Raise is going to be fantastic. The fundamentals are sound and you can see that potential as clearly as the RGB shining out of it. Today, however, you'll get a great keyboard with the promise of things to come. If you can take a few rough edges, it's a solid, if expensive, option.

The product described in this article was provided by the manufacturer for evaluation purposes.
8.5Great
Pros
Cons
Tags
Mechanical Keyboards
Peripherals