Durgod has become rather beloved in the mechanical keyboard community, and over the last year has made major waves among gamers as well. We’ve looked at three of their keyboards in that time and each one has impressed us for the price. Today we’re looking at the Taurus K320 Nebula, a classic in their line-up, re-imagined with RGB illumination. Coming in at $139.99 and featuring full programmability for gaming, is it worth an add to your wishlist? 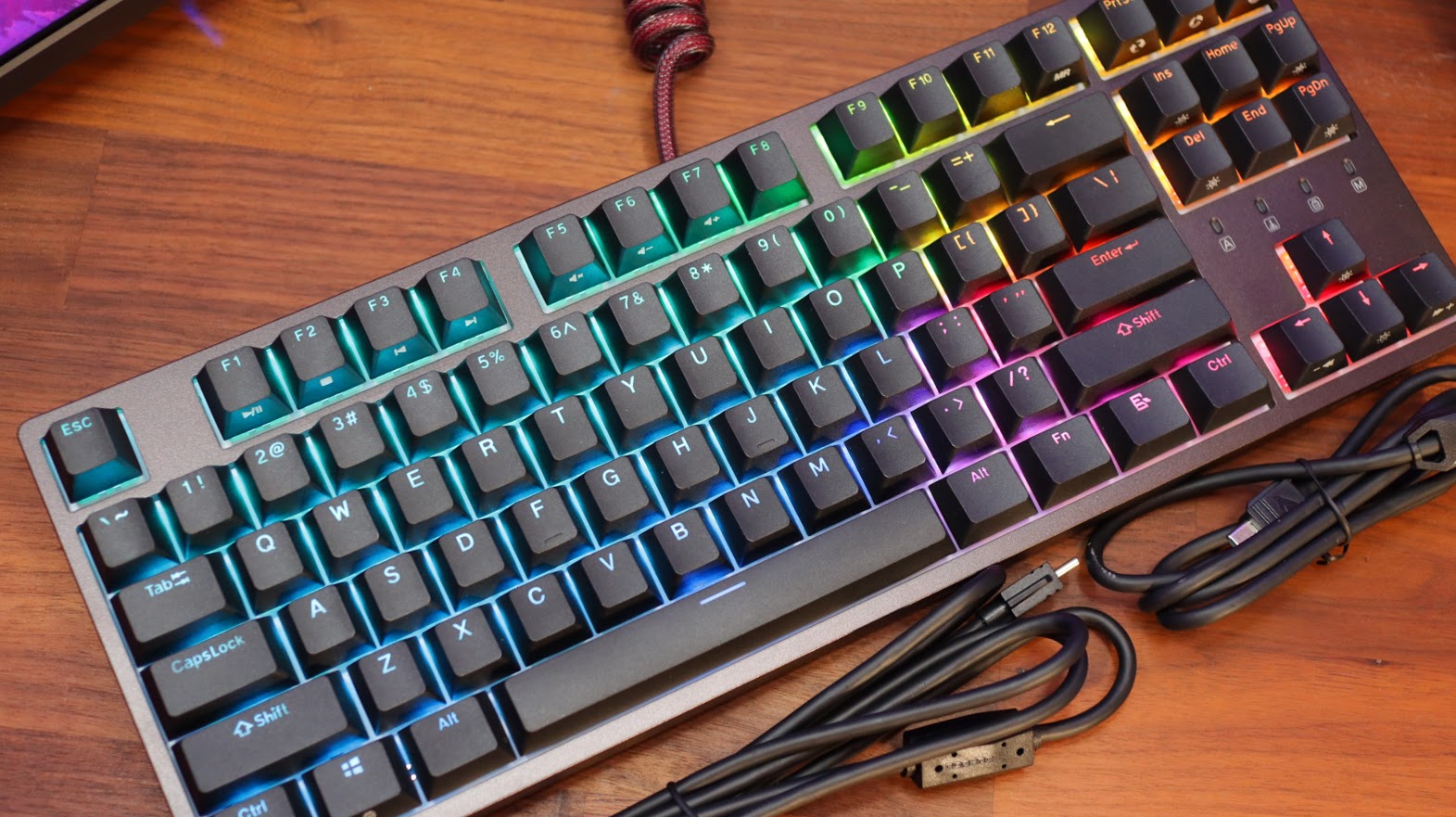 The K320 Nebula is a tenkeyless keyboard, sometimes referred to as an 80%. In essence, it’s a full-size keyboard with the number pad chopped off. Inherently, these compact designs won’t be for gamers who need the number pad, but if you’re like me and rarely use it, a TKL is a great way to save space on your desk without going all the way to a true compact keyboard like Durgod’s excellent Hades keyboard.

The board feels very solid in the hand, weighing in at just under two pounds. There’s a steel plate which accounts for a good amount of that heft and keeps the board feeling rigid and flex-free. There’s more to it than that, though. There’s a solidity to the board that makes the case feel full, without much empty space, so there’s less reverberation and spring ping (though, like all Cherry switches, there’s still a bit of spring noise). Compared to a lot of other boards with plastic housings, the K320 feel very well made and durable. 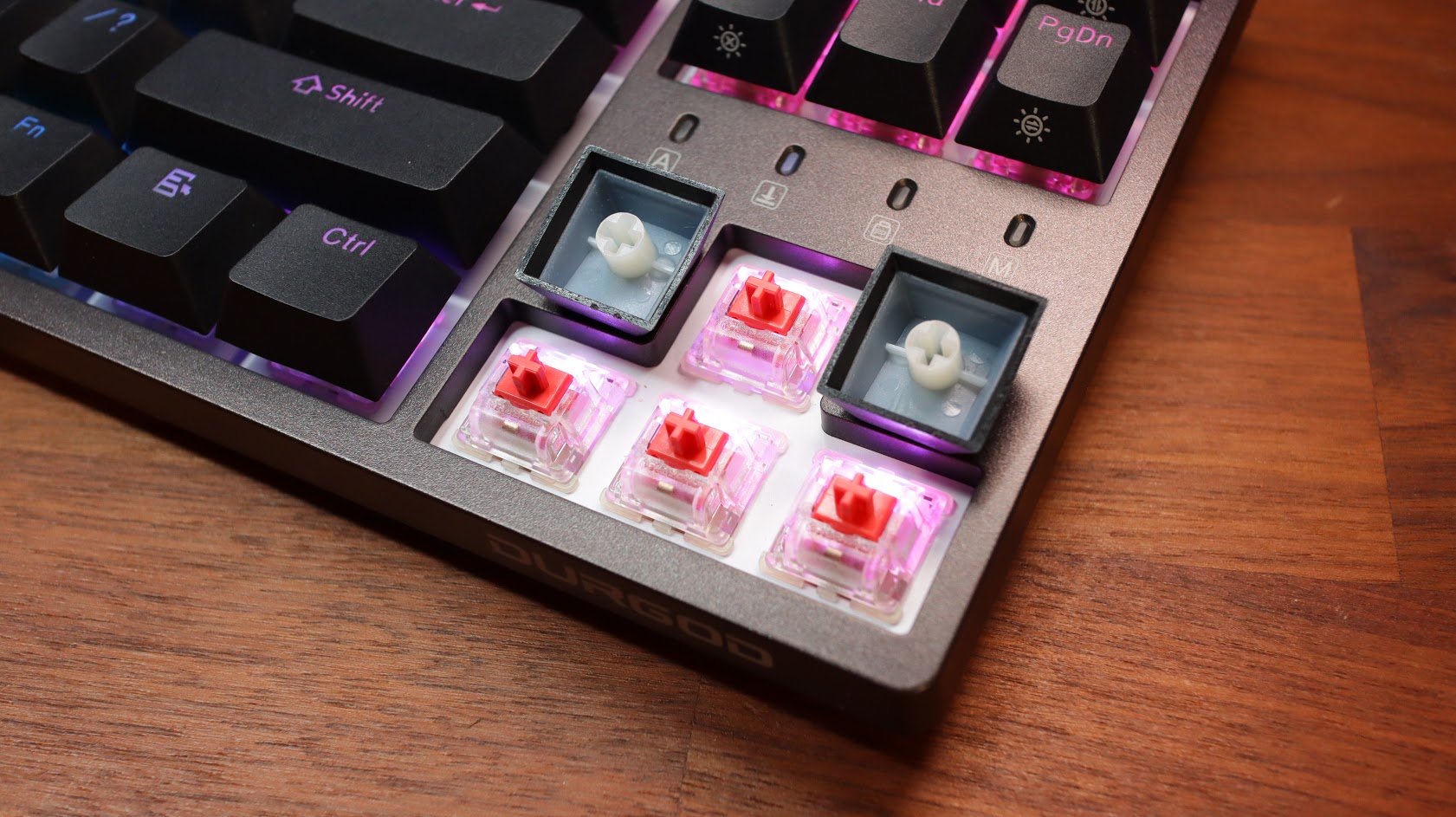 That also applies to the switches, keycaps, and other surrounding details. It uses genuine Cherry switches, which each have a lifespan of 50 million presses. You have a plentiful choice of switch types, too. You have the usual suspects — red, blue, and brown — as well as black, speed silver, and silent red. I was sent the model with silent red switches and they live up to their name. Unless you’re really hammering away, people in the same room may not even realize you’re typing on a mechanical keyboard.

The keycaps are also excellent being made from durable PBT plastic. PBT is a denser material, which makes it less resistant to shine and picking up finger oils. The key surfaces are slightly textured to enhance this further and feel nicer than the smooth, ABS keycaps found on many gaming keyboards. They’re also doubleshot, so the legends are made of a separate piece of plastic and will never fade, and backlit for easy use in the dark (and excellent RGB backlighting).

One thing I’ve come to realize really sets Durgod keyboards apart is their attention to detail. The texturing on the keycaps and filling up its empty spaces are two examples, but it goes beyond that. The stabilizers have been lubed from the factory, dramatically quieting them down compared to Razer, Logitech, Corsair, et al. and making them feel much smoother and consistent with the rest of the keyboard. The cable is detachable and Durgod packs two in the box, USB-C to USB-A and USB-C to USB-C (as well as a keycap puller, stick, and dust cover). You can use any USB Type-C cable with it, but if you use theirs, there’s a built-in guide to make sure it plugs in easily, every time. 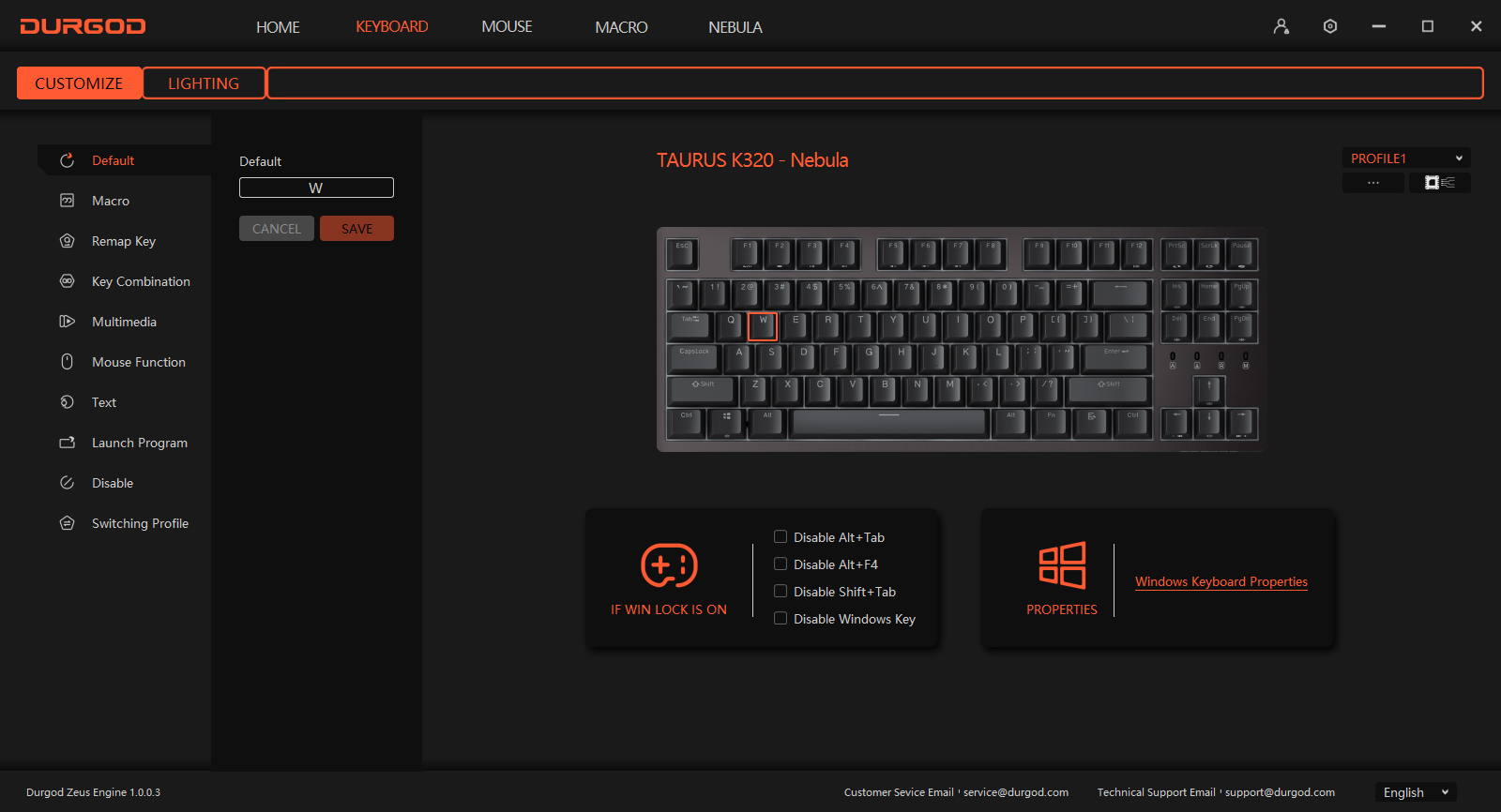 Of course, because it’s a gaming keyboard, you expect a certain level of programmability and customization: the K320 doesn’t disappoint. You can record complicated macros and map them to most keys, as well as tie a wide array of other functions, like launching programs, sending text, or even controlling the mouse. This is all controlled through Durgod’s Zeus Engine and it’s surprisingly full featured and easy to use. Durgod is coming close to Logitech territory here. 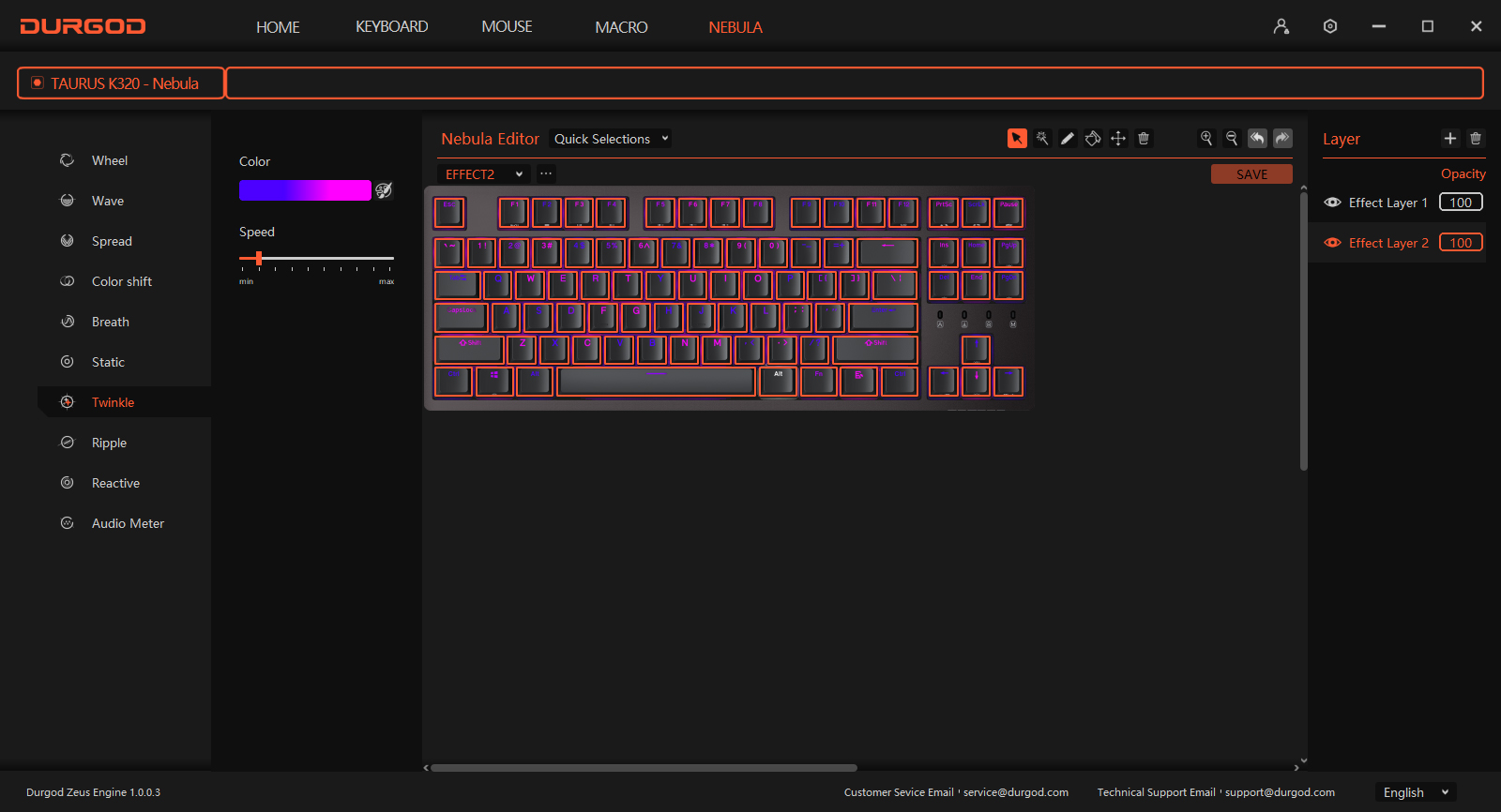 When it comes to lighting, I was equally surprised. You can choose from eleven different customizable presets. Nebula isn’t just Durgod’s moniker for RGB backlighting either. Inside the software, “Normal Effects” and “Nebula Effects” are separate, with Nebula allowing much more customization, including Photoshop like layering. This allows you to create some very neat custom effects with very little effort. For example, within just a few moments, I set the K320 to “Twinkle” pulse between rich purple and pink. On top of that, I added a reactive typing effect that would turn keys white when pressed before sliding into a gradient to seamlessly rejoin the background effect.  I also really enjoyed the Audio Meter, which turns the keyboard into a horizontal equalizer with a customizable color spectrum. If you’re a Razer fan, you’ll also be pleased to know that the K320 Nebula is compatible with Razer Chroma.

Durgod also uses a white surface under the keys to help spread the light evenly for a “light bed” effect: 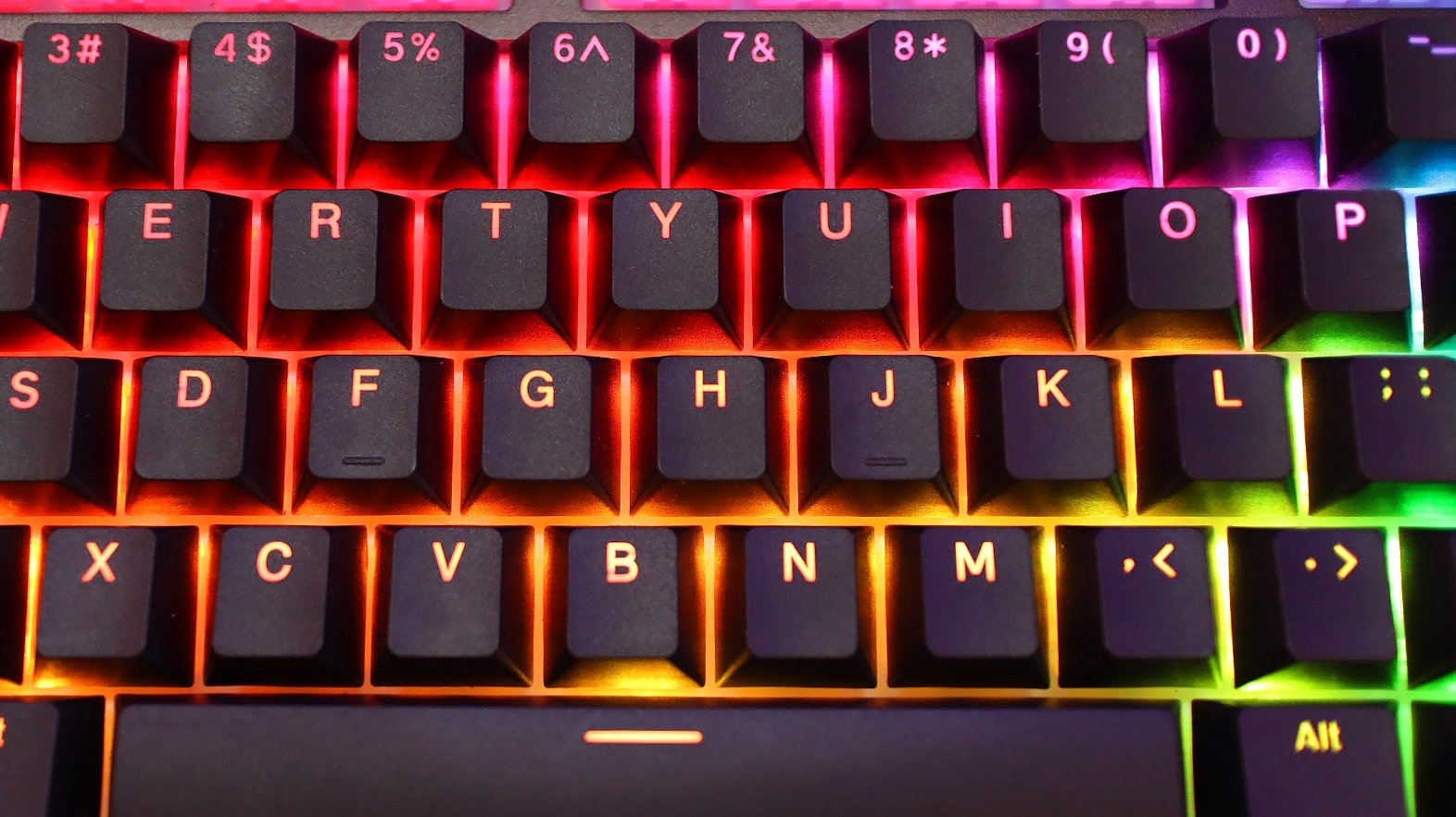 In actual use, the K320 Nebula performs fantastic. The silent red switches felt great: slightly softer than normal reds due to the dampener but much quieter. The board was very responsive, which is to be expected with a polling rate of 1000Hz/1ms. I didn’t notice any shortcoming whether I was playing World of Warcraft or Call of Duty Modern Warfare. In sheer responsiveness, it lacks nothing.

In feel, it’s substantially better than the majority of gaming keyboards. Compared to the Razer Blackwidow, it feels entirely better built in every way. Much of that holds true across most Corsair’s keyboard portfolio too, with the exception of their flagship K95 RGB Platinum XT. Compared to those boards, the K320 Nebula feels entirely less hollow with each key pressing feeling more solid and substantial thanks to the thick-walled PBT keycaps. Gone are the loud, off-sounding clacks of the spacebar and backspace keys, too, thanks to the factory lubrication. With dual stage tilt feet, finding a comfortable angle without a palm rest is also easy.

That isn’t to say the K320 Nebula is as good as they come. At $139, I do wish we had a metal top plate here and some switch options beyond Cherry MX. The spring ping isn’t bad, but it’s audible if you listen for it and generally better on off-brand switches. I’m also not a fan of how the Zeus Engine “takes over” the minute it’s loaded and prevents the onboard lighting controls from working. For a good few days, I was afraid my onboard controls didn’t work at all until I tried it on my laptop that wasn’t running the software.

That said, it’s easy to see why the original Taurus K320 became so popular. At $139, it’s not a cheap keyboard but feels like it earns its asking price better than some of the biggest keyboards out there. The Nebula takes that up a notch by adding exceptional lighting options to dial in a look that is unique to you without spending hours pouring over tutorials beforehand. Simply put, it looks good, is feature rich, and feels great to use whether you’re typing or gaming. There’s some room for refinement between the onboard controls and software, but overall, this is a great gaming keyboard.

The product described in this article was provided by the manufacturer for evaluation purposes.
8.5Great
Pros
Cons
Tags
Mechanical Keyboards