Let’s face it: mechanical keyboards can start to become a little samey after a while, and that’s exactly what makes the Durgod Fusion stand out. The company, whose Hades and Venus keyboards we’ve loved in the past, is back again, this time with a line of keyboards straight out of the 1980s. It’s nostalgia-city, with a whole lot of modern improvements to keep things fresh. Ready for a blast from the past? 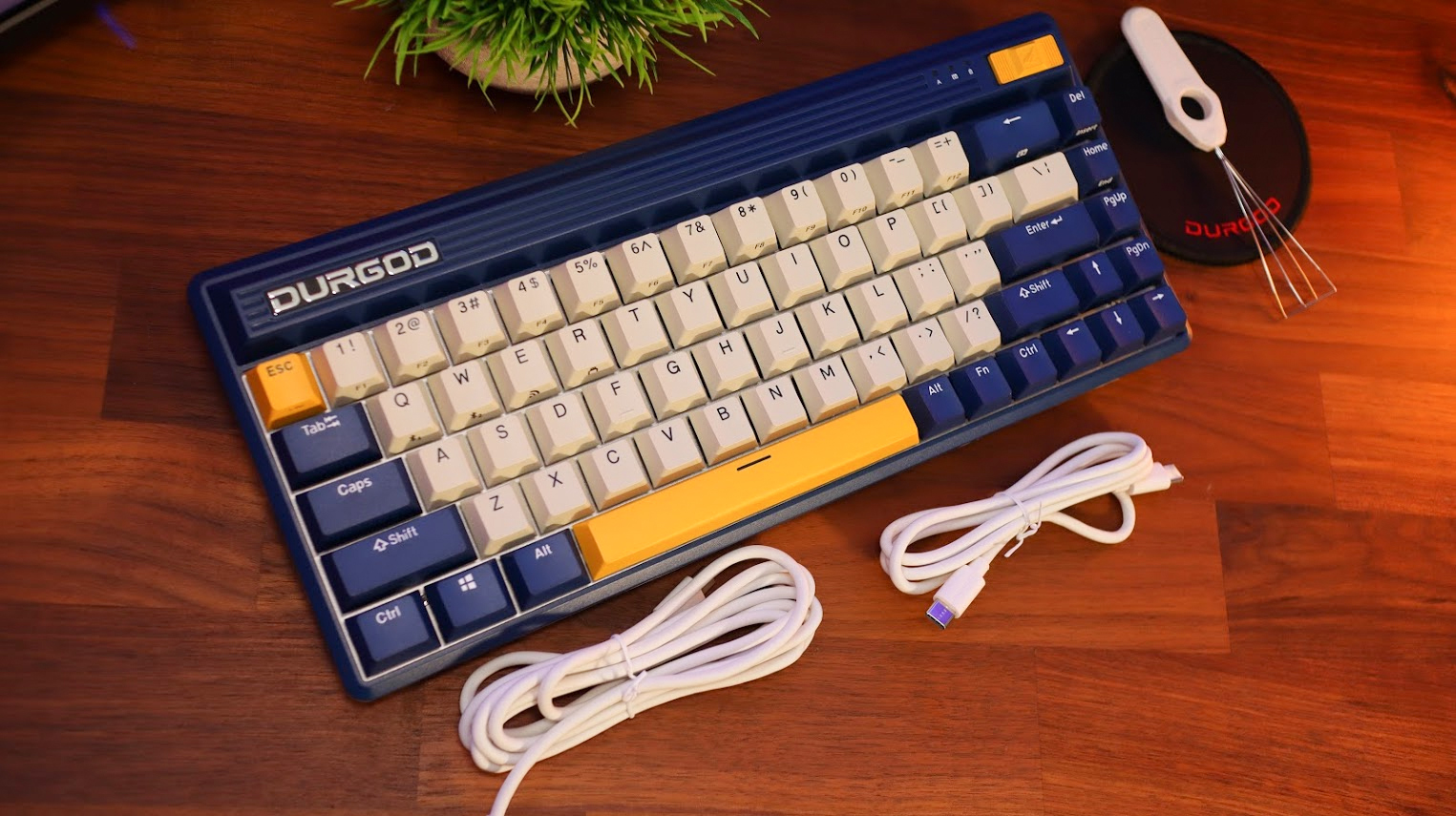 The Durgod Fusion is a 65% compact keyboard with one of the most unique looks I’ve seen in my time reviewing mechanical keyboards. The company is targeting 80s kids with this one, a group of which I’m a part, and have absolutely nailed the mark for nostalgia. It looks like I’m not alone, because the Durgod team surpassed their funding goal a whopping eighteen times over, earning more than $180,000 with a whole month left to go.

The keyboard comes in three different colorways that match its retro inclinations. The version I was sent is called Navigator and mixes blue, yellow, and cream as its primary colors. Original is grey, white, and orange. The kicker, and what I think will wind up the most popular colorway is Steam, which is clearly themed after the NES. 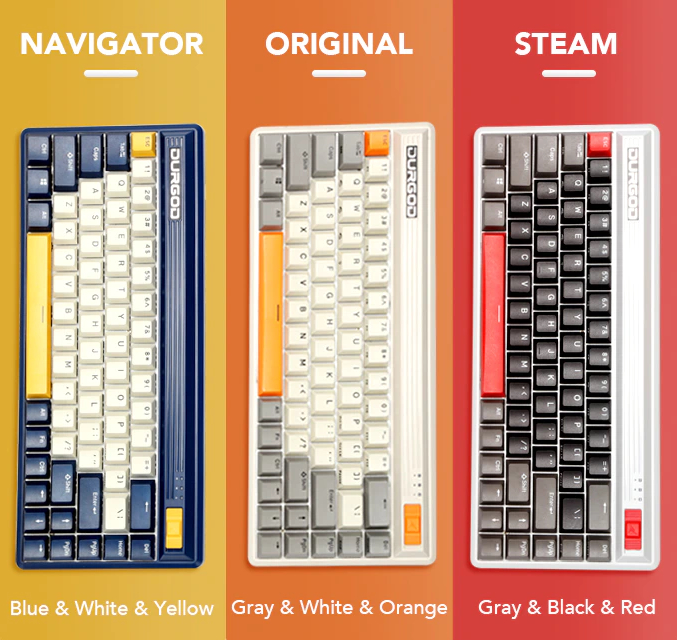 The vintage vibes permeate the rest of the design too. Everything from the Atari-like grooves on the top to the off-white color of the keycaps makes this feel like a keyboard out of time. 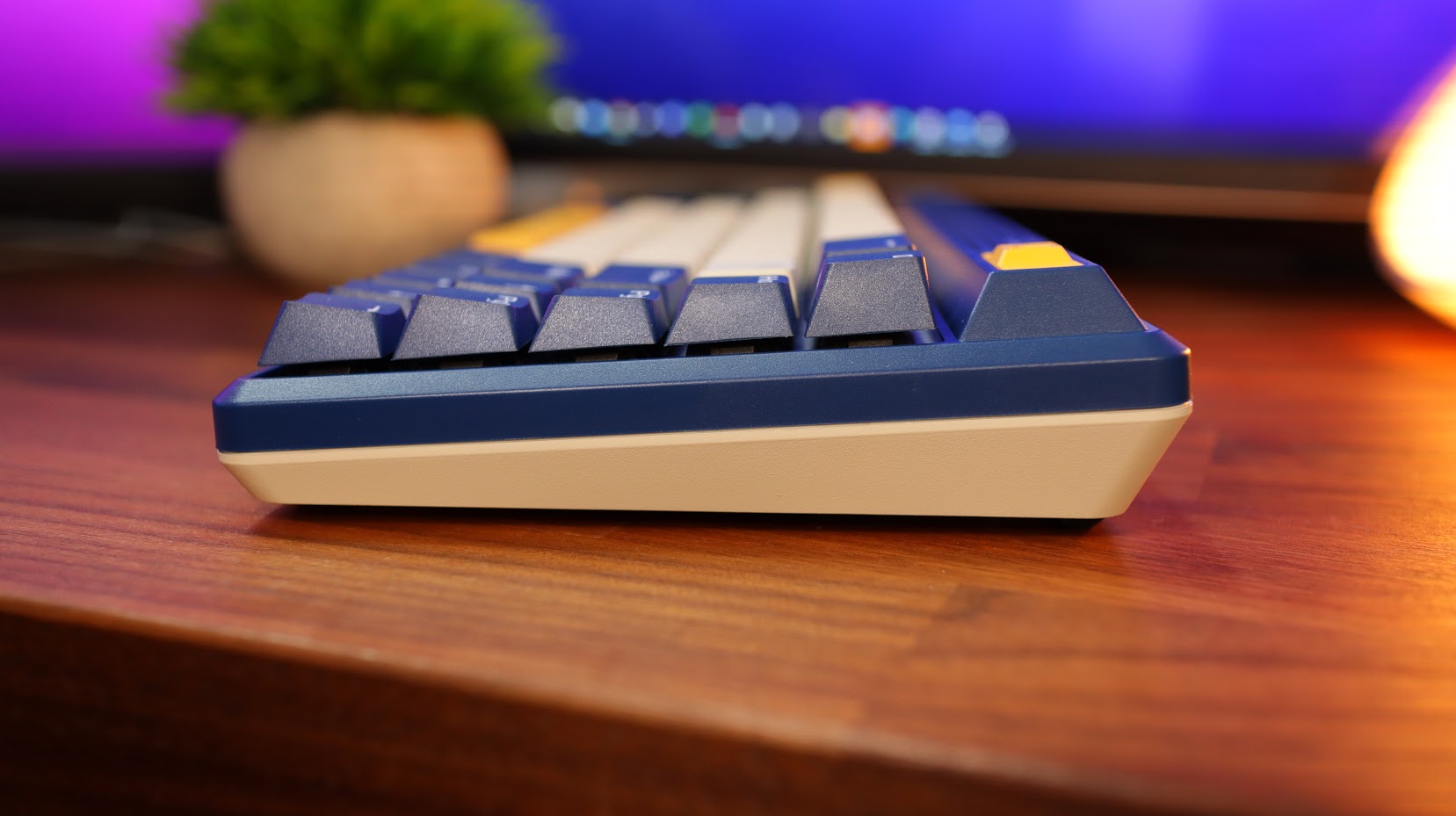 The board is boxy, pretty much a straight rectangle from the top, but when viewed from the top is angled and, again, brings back Atari vibes with its high profile top bezel. The case is also a two-piece shell, on my version, two different colors. It’s not low profile, but it uses a floating key design which adds another angular line to catch the eye. I’ve been struggling to figure out whether the Navigator and Original color schemes are tied to a specific piece of pop culture like the NES-themed Steam, but I’ve come up short. One thing’s for sure, though, Durgod has nailed the retro look here.

To a degree, that’s also true with how the keyboard feels. It uses a steel plate, but the board steel feels pretty lightweight without feeling cheap. In fact, it weighs in at only 613 grams which is only 14 grams more than the Ducky One 2 Mini despite being larger in size. It doesn’t feel hollow, but isn’t the heavy-weight behemoth many modern keyboards try to be. My unit shipped with Cherry Silent Red switches, so it’s pretty quiet, but I’ve heard typing samples with browns and reds and the case seems to accentuate the clack with those switches. Silent reds feel good and won’t bother the person next to you, though, so they’re a good choice if you’re on the fence about noise. 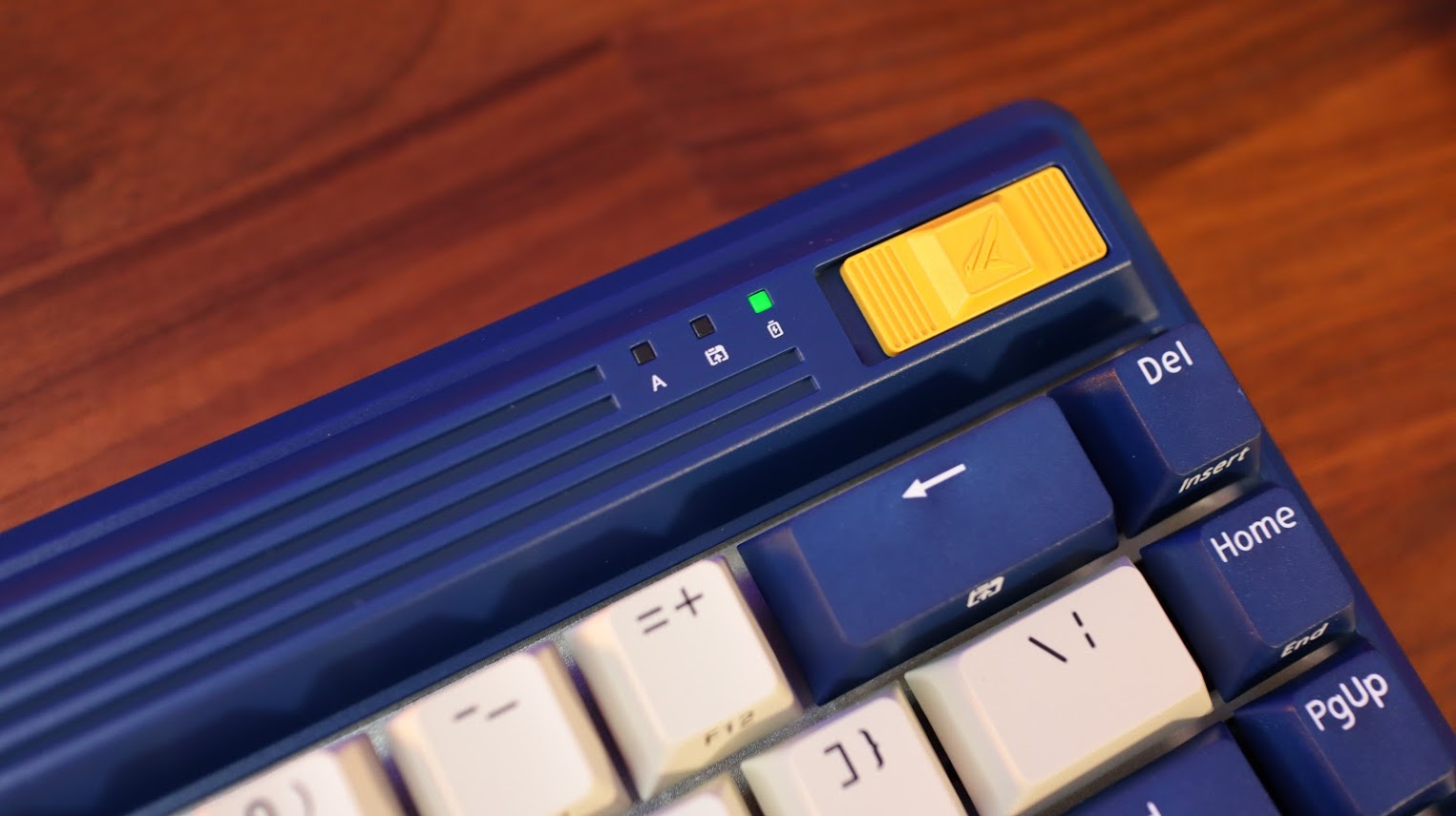 There’s also a satisfying snappiness that comes with the plastic build. On the upper right is a chunky on/off switch for wireless connectivity. It’s the kind of big switch you would expect from an 80s electronic. The tilt feet on the back are also snappy and stay in place perfectly once open. There’s no included wrist rest, but the range of tilt is accommodating, so I didn’t feel like I needed one.

Even though the Fusion looks vintage, is packed with modern features that will see you through everything from a competitive shooter to firing off a lunchtime email. The biggest feature is its three-way connectivity: Bluetooth 5.0, 2.4GHz wireless, and USB Type-C wired. The killer feature here is the 2.4GHz wireless, which allows you to connect at much lower latency than Bluetooth while still cutting the cord. The Bluetooth connection was perfectly reliable, too, and I never experienced a dropout or missed keystroke (I’m writing this review over Bluetooth, actually). It also supports dual Bluetooth connections which can be hotswapped with a single key combination. Push to its limit, you could swap between three separate wireless devices without ever getting up from your chair.

Durgod quotes a 40 day battery life for the Fusion too, though without current software support or a good battery indicator on board, I can't say for sure. What I can say is that I've been using the keyboard consistently for a week totalling about 12 hours of use time  and it's still going strong. Using Android's readout, it's lost about 30% of its battery during that time. 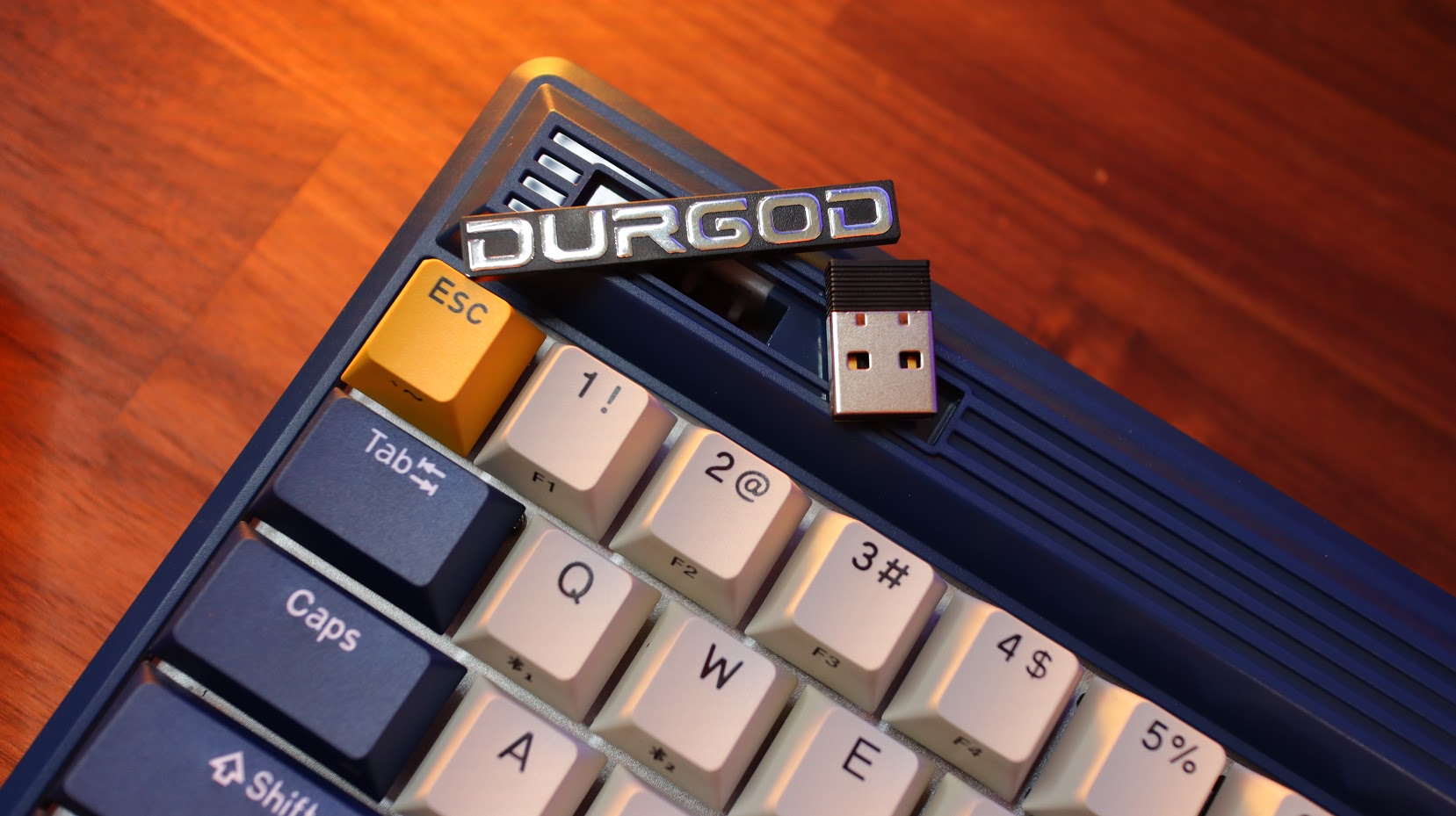 For gaming, you’ll be happy to find that it sports a 1ms response rate so you’ll never miss an action because the keyboard wasn’t scanning. I can’t find anything official on N-key rollover, but I was able to register 31 simultaneous presses, so it clearly offers it. I also didn’t experience any ghosting whatsoever. For gaming, it performed right alongside dedicated gaming keyboards, like my Corsair K95 Platinum without missing a beat.

And sorry, RGB fans, there’s no lighting to be found here. This keyboard is entirely unlit in keeping with its theme.

I’m also happy to report that the typing experience here is sublime. Durgod has an excellent reputation in the mechanical keyboard community for the quality of their keyboards and it shows. The keycaps are doubleshot PBT, so they won’t shine and the legends won’t fade, and they’re thicker than your average ABS keycap for an improved key feel. The stabilizers also come factory lubed, so they’re not rattly and feel smooth to the touch. 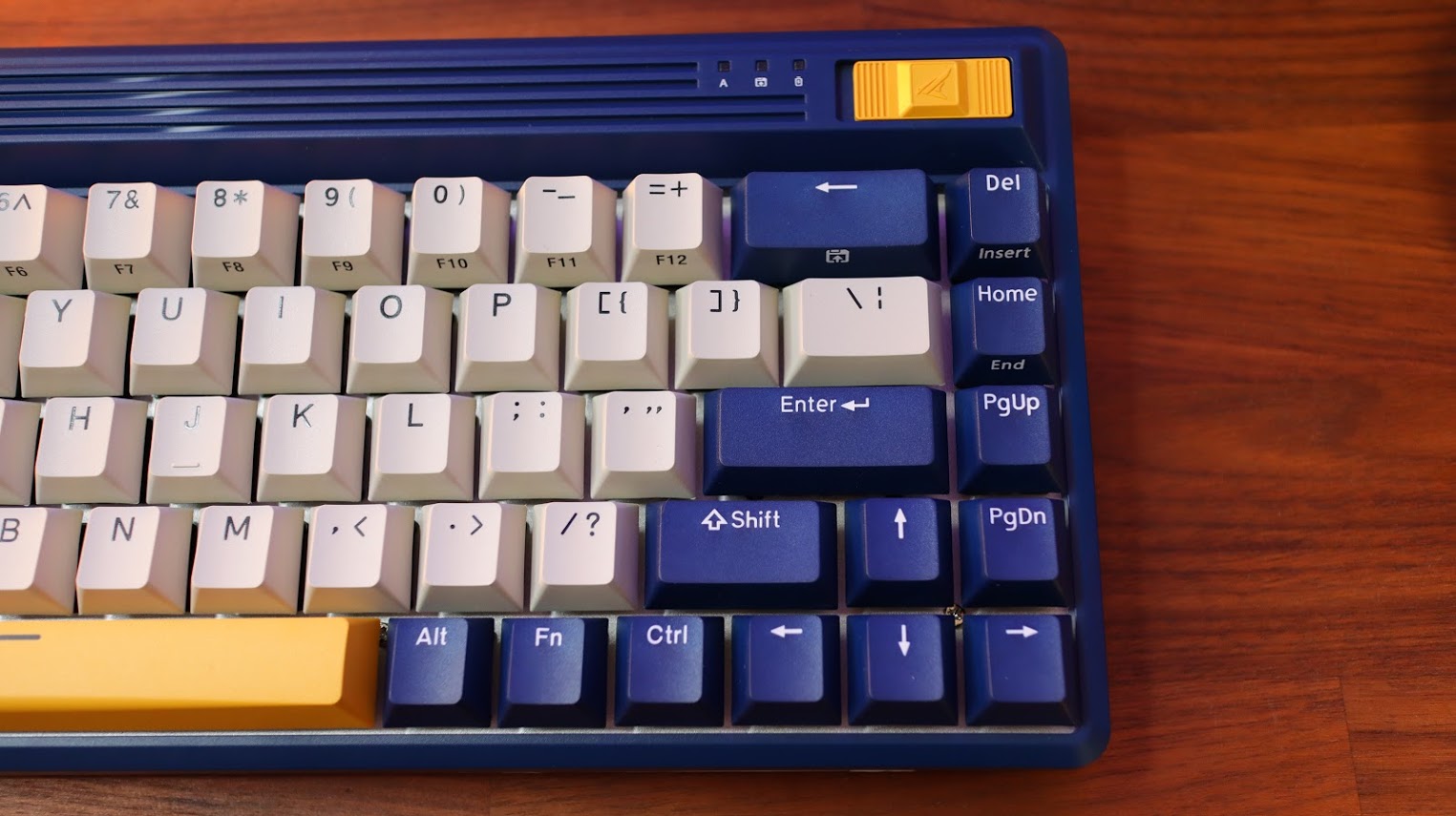 The layout is also one of my favorites. 60% keyboards are all the rage right now, but if you need arrow keys they’re not the best fit. Here, you get to keep your arrow keys as well as a selection of navigation and editing buttons. According to the marketing material, there are multimedia functions but I wasn’t able to find them no matter what mode I was in. Perhaps they’re enabled by the software? 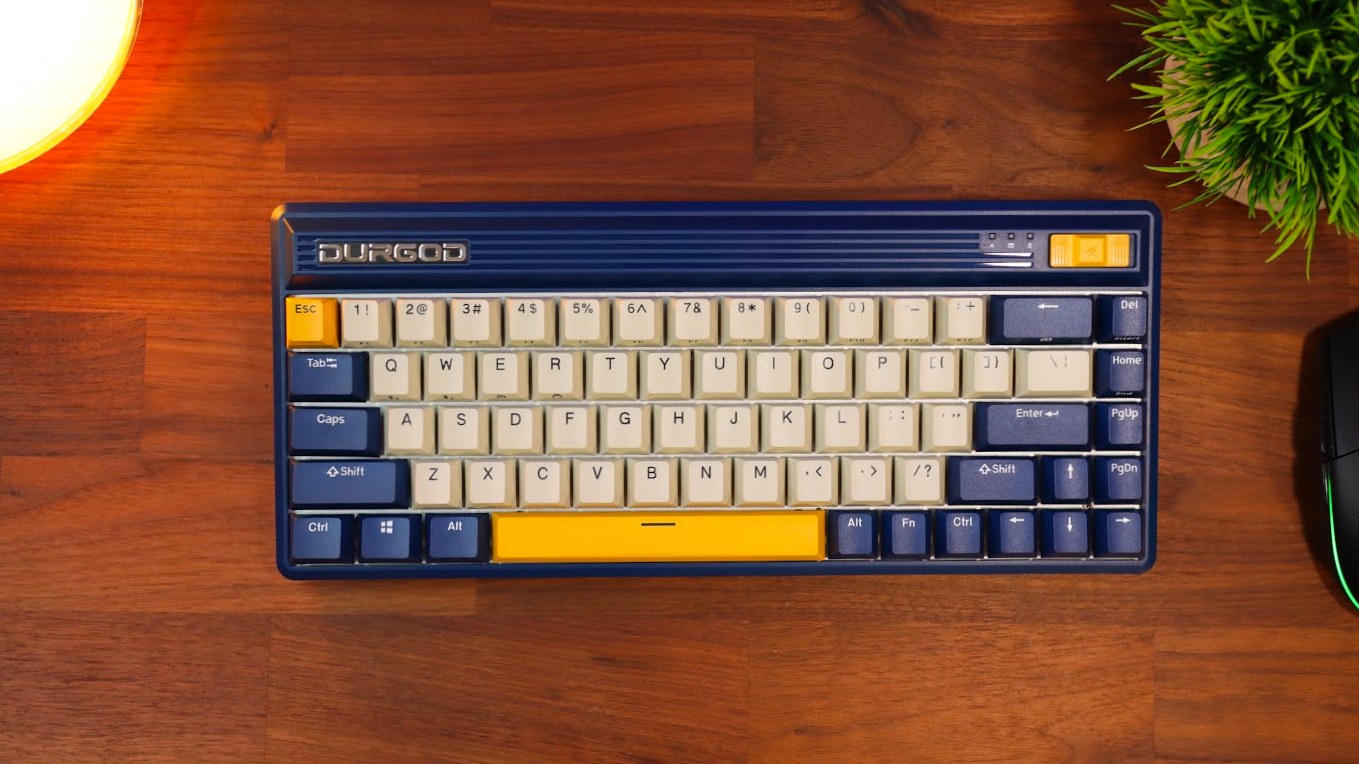 The Durgod Fusion is a genuinely cool keyboard and a unique find in a sea of sameness. At the current cost of $109, it’s well worth the investment if you like its retro style. The lack of software support currently is worth noting, but given Durgod’s previous keyboards that also use the Zeus Engine, I feel confident that they will follow through again here by the time units launch to Kickstarter backers. My reservation lies with the current pricing scheme which would have the Fusion retail for $199 once the campaign has concluded. This is simply too much for a 65% keyboard, even one as neat as this. Still, for a keyboard as unique as this, it’s worth paying a bit extra for. If you’re a child of the 80s like me, this is sure to take you back in time and give you a great typing and gaming experience while you’re at it.