The DUNU Titan S are cyberpunk-inspired earphones from one of the leading audio brands in the world of HiFi. Coming in at $79.99, these earphones boast zinc shells and liquid-crystal polymer dynamic drivers emphasizing detail and clarity to let you enjoy your music and entertainment to its fullest. It’s joining a crowded market segment, going toe to toe with popular choices like the Moondrop Aria. Let’s see if they can carve out a spot of their own as a lasting recommendation! 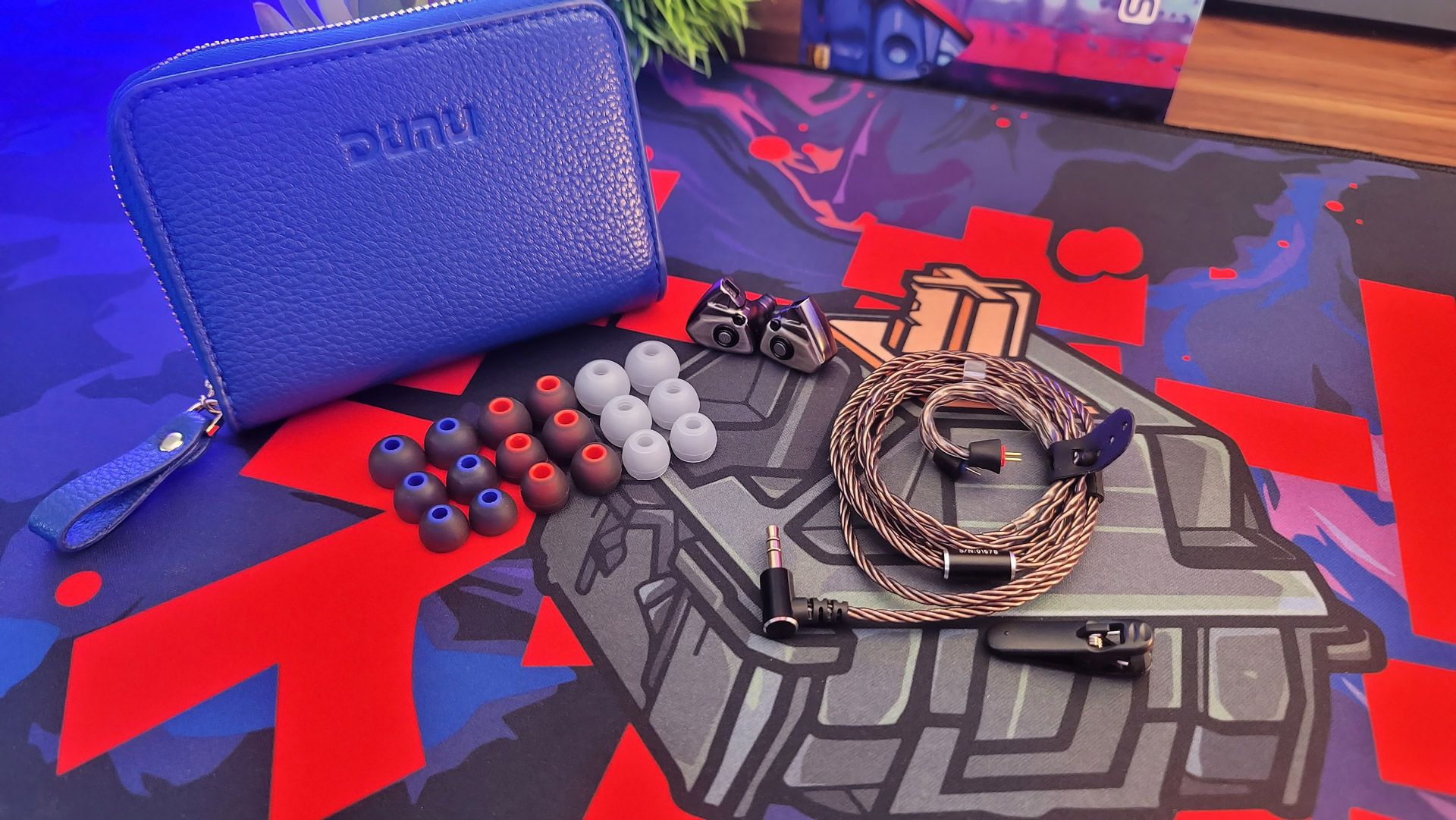 DUNU has been making its own earphones since 2006 and has developed quite a reputation for itself in audio circles. Some of the most popular and hyped IEMs of the last several years have been from DUNU, but its history extends further than that. The company has its roots as an OEM/ODM, working behind the scenes to make audio equipment for other major brands as far back as 1994. This is a company that knows a thing or two about making a quality earphone, and it shows with the Titan S.

The Titan S is the latest in the company's Titan line-up.  While the series has always been about delivering the best bang for the buck, the Titan S is a bit of a reinvention. It brings back the classic single dynamic driver design, but the appearance and wear-style are brand new. This release moves away from the hanging-wire, earbud-inspired design of its predecessors and instead delivers one of the more unique IEMs we’ve seen of late. 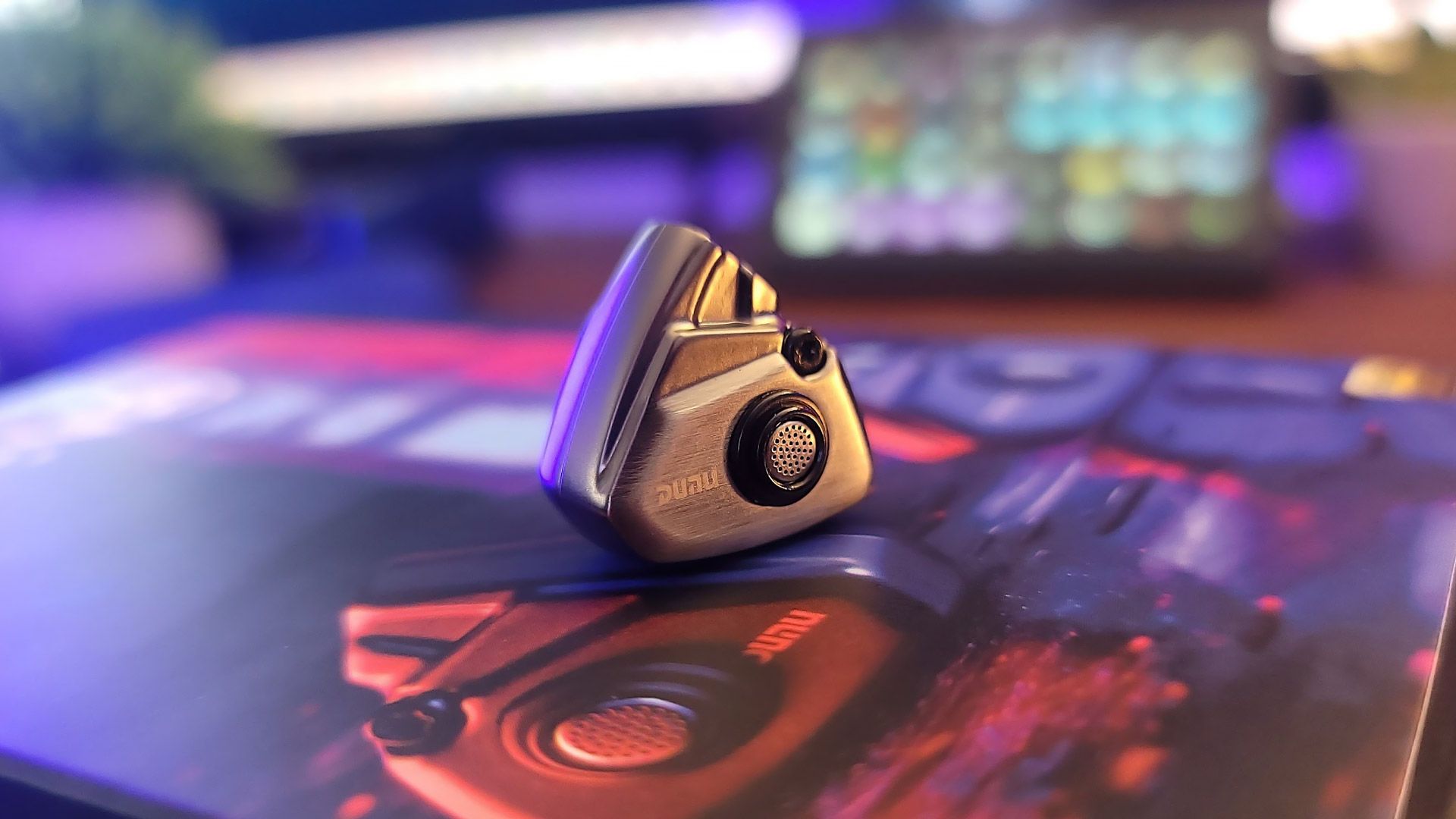 The Titan S is cyberpunk-inspired. It features gunmetal gray shells made out of zinc alloy. The faceplates are very angular and are stepped down to the 2-pin connector at their top. There’s an exposed torx screw on the upper-left and a big, central vent by the DUNU logo. I didn’t make the connection to cyberpunk on my own, but once I heard it, I can definitely see the inspiration.

That design definitely has its benefits in durability. Each shell is two pieces of zinc, compressed together and polished to a proper finish for comfort and aesthetics. I’m not positive if the nozzles are also zinc, but they’re metal and match in color. Compared to plastic earbuds, these will stand up to far more abuse, making them a better fit as a daily driver. The fact that they’re unpainted also means you won’t have to worry about paint chipping or their appearance degrading over time.

Inside those shells, DUNU has employed large 11mm dynamic liquid crystal polymer drivers. This has been a popular driver-type in the budget segment and is also used by the Titan S’s biggest competitors, the Moondrop Aria and the TinHiFi T3 Plus. The reason is that polymer is able to provide improved rigidity and responsiveness, increase the speed and detail it is able to produce. 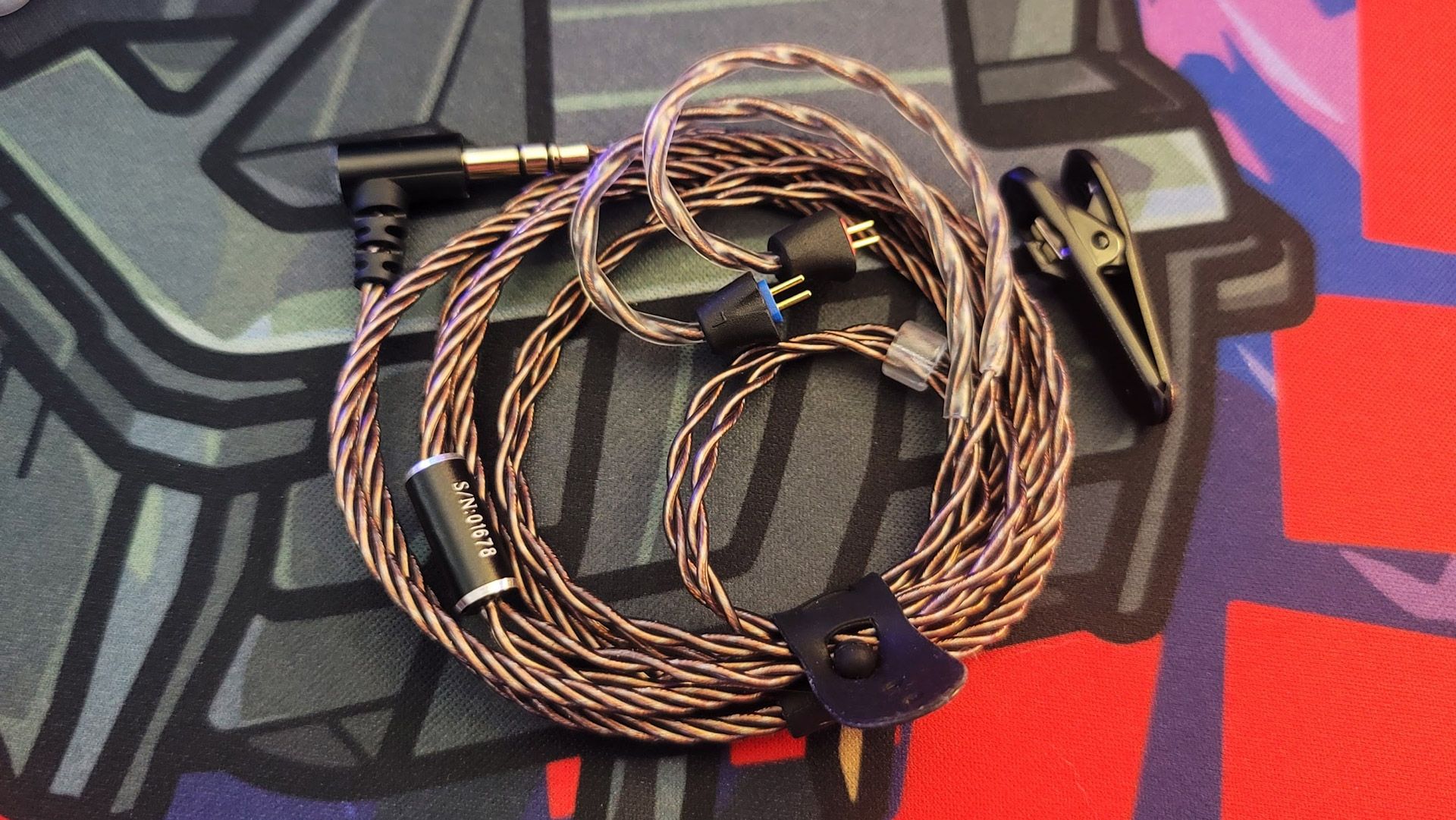 Also included in the package are three sets of silicone tips, a detachable silver-plated copper cable, and one of the nicest travel cases I’ve seen with an IEM. The case is really the standout here. It’s blue, trimmed in faux leather, and zips closed like a coin purse. The inside is fabric-lined to protect the earpieces and there’s a small pocket for storing spare tips or even the earbuds themselves if you don’t want them to move around inside the case.

The cable is simple, but I like it. There’s no thick braid, but it’s lightweight and doesn’t drag on your ears. It’s also not microphonic, so there’s no worry about it rubbing on your shirt while you’re listening and sending those sounds through to your ears. There are finer cables out there (including from DUNU itself) but this is  a boon to comfort, and I like that. The only downside to it being thinner and lightweight is that it’s more prone to tangling when not wrapped up properly, so be sure to use the included rubber strap. 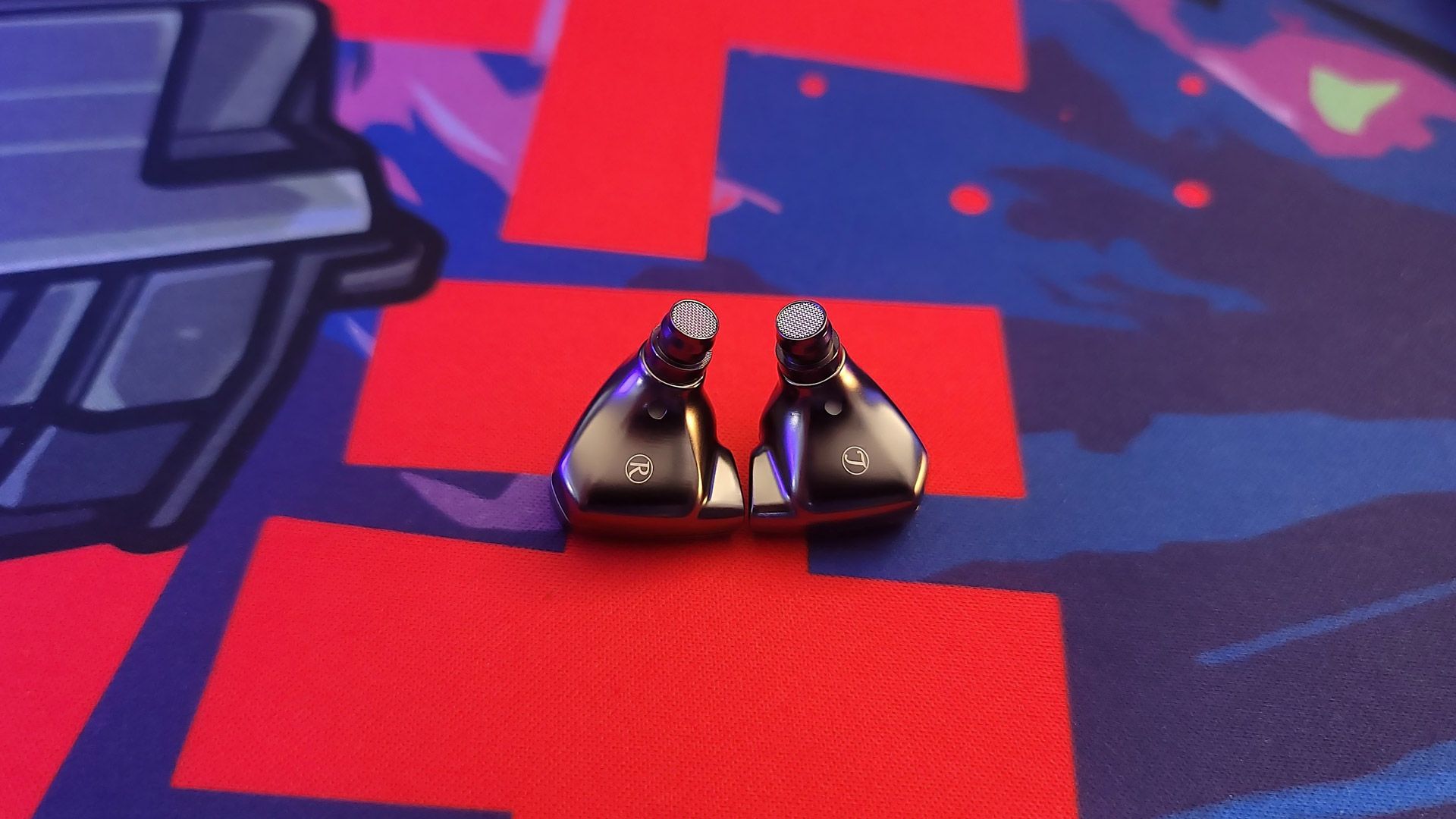 The DUNU Titan S are a comfortable fit. At first glance, you might not think so due to their angular face plates, but their internal surface is contoured to rest comfortably within the outer ear. The nozzles are on the longer side, which works well for me but might feel a bit too invasive for some without the proper tip (I had to swap between types after a few days of use). The result was secure and well-isolating, and created an effective seal to deliver the full bass these earphones can produce.

Included in the box are three different types of silicone ear tips, each with S/M/L size options. The blue tips have a narrow bore and a shallower fit whereas the red tips are slightly wider and longer. There are also white silicone tips which are more bulb-like in shape but are closer to the red tips in length. I found the blue to be most comfortable, but between these three varieties, most users should be able to find a comfortable fit. 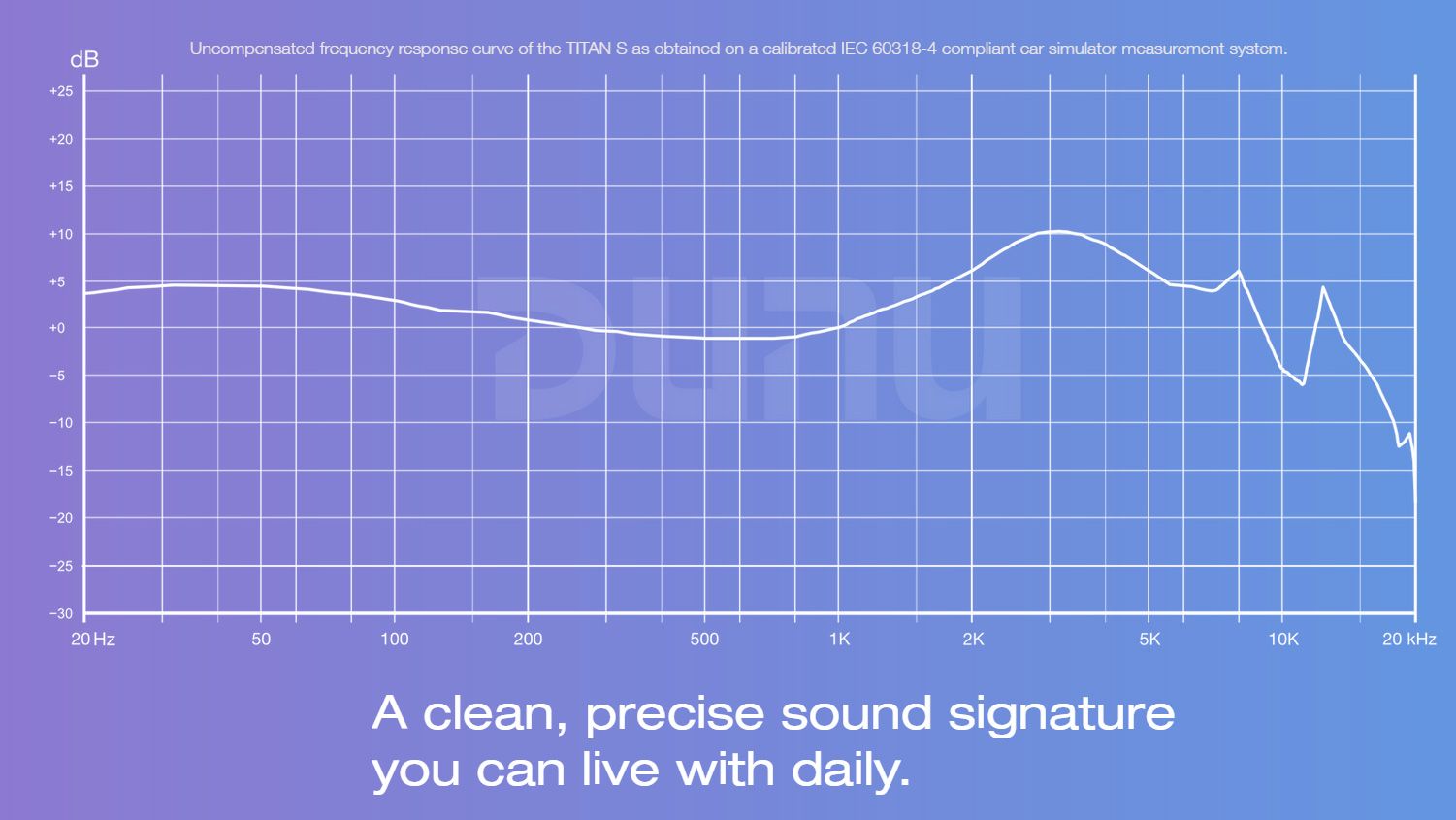 Onto what you’re really waiting for: the sound! There are plenty of cool-looking earphones on the market today that leave your ears feeling like they’re been struck with pins and needles, and I’m happy to say this isn’t one of them. As you can tell from the graph above (courtesy of DUNU), the Titan S has been tuned with a U-shaped sound signature with more of a rise in the upper-mids and treble. They’re clearly not a basshead set but feel well-balanced with a slight edge toward detail.

The bass on these earphones is about quality instead of quantity. There’s enough bass to enjoy all kinds of music, from atmospheric Lo-Fi to hip-hop to heavy metal. The sub-bass extension has reach, so songs like Tom MacDonald’s Church have a sub-woofer-like body, but it doesn’t step on the mids or highs — super important to the track. Changing gears entirely, Atreyu’s Bleeding Mascara opens with machine-gun double-bass kicks that come through crisp and clean. This song is a great test track for the speed of headphones and earphones and can fall apart entirely if the driver can’t keep up. At the same time, it lacked some of the punch that makes these opening moments so enjoyable.

So while this isn’t a bass-heavy headphone, it definitely does bass well. There is lots of detail in the low end. You can hear the texture of the bass notes in Church and how the impact of the kick in Bleeding Mascara. Love in an Elevator by Aerosmith was tight and took me back to my first concert.

For gaming, you might find yourself reaching for the EQ. For pure bombastic, cinema-like action it can be a bit lack. In moments when there’s a lot going on at once, the mids and highs cut through, which can feel a bit imbalanced. Now, DUNU isn’t marketing these as being a gaming or movie earphone, but realistically speaking, you’ll use these for more than just music at some point. In those moments, don’t be afraid to rebalance. These earphones are resilient to EQ. 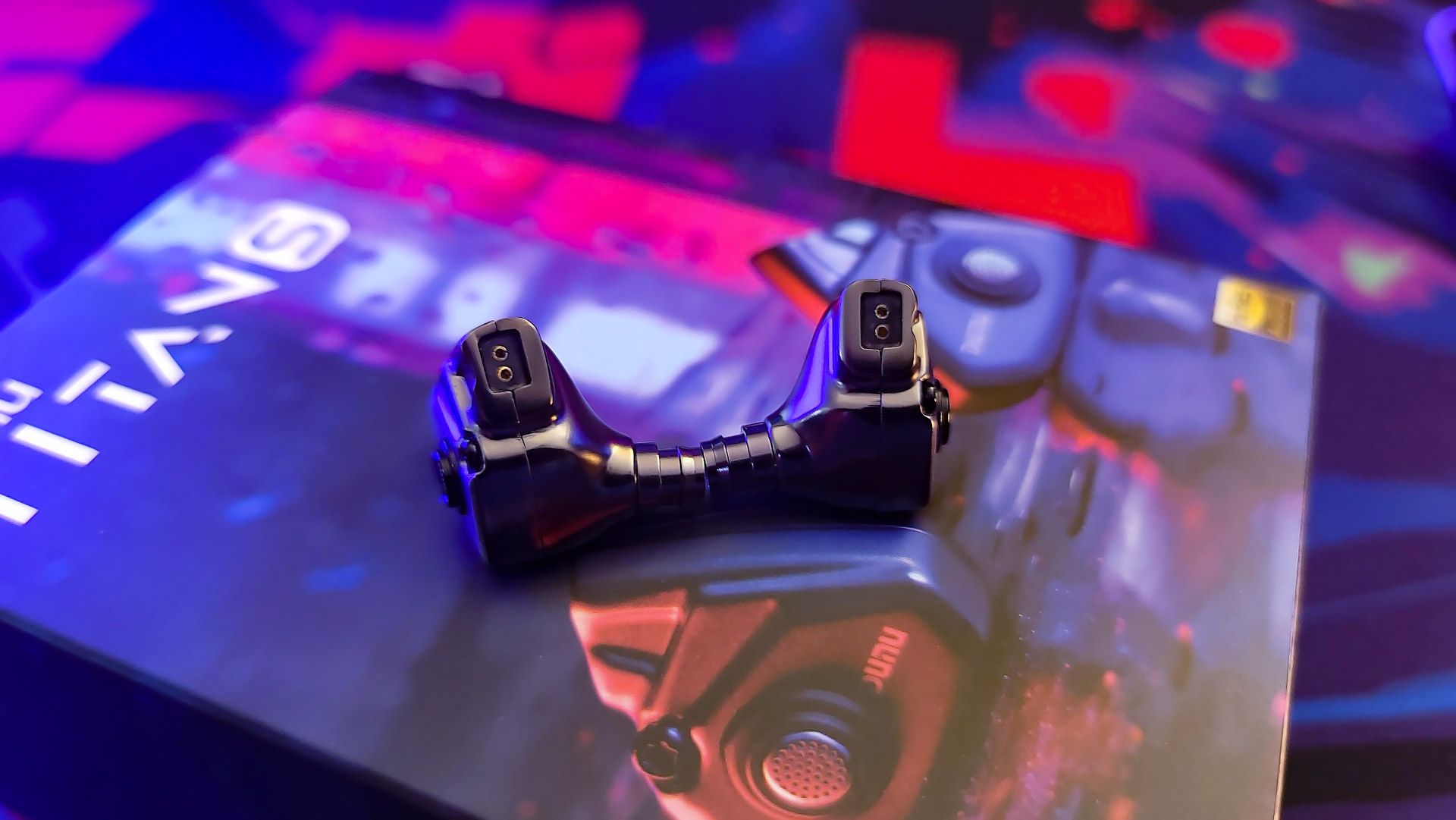 The mids are rich in detail. I was surprised by the amount of resolution the Titan S offered. Because of the way DUNU has tuned them, you’ll find that you can make out tiny details that may have faded into the background with other headphones. In Love in an Elevator, I was able to hear more from the trumpet in the second half than I ever have before, even as it fades to near inaudible levels. Vocals also sound natural and aren’t unnecessarily forward. Instead, they sit back closer to the instruments, further emphasizing the sense of balance that typifies these earphones.

When I first saw the graph, I was concerned that the Titan S might be fatiguing or sharp. Pleasantly, this really isn’t the case for most of my listening. Clean and mildly overdriven high notes on the guitar definitely come through, but unless I was really driving the volume or listening to something that was recorded to sound thin, I didn’t find them to sound sharp. Percussion stood out to me in particular. DUNU has found a sweet spot between making cymbals and high-hats come through cleanly with realistic presentation and decay while also not being pointed.

Soundstage on this IEM is wider than I expected. Since the side ports are aesthetic, I expected the Titan S to be fairly average, but they’re surprisingly wide in their presentation of sound. They’re still an IEM, of course, and won’t compete with a good pair of open-back headphones, but the sound has room to breathe and doesn’t feel congested. Everything I listened to had natural air and space, and didn’t feel “front and center” like many other sub-$100 earphones tend to.

Imaging is also good on these earphones. Picking out the positionality of sounds is easy. This is especially noticeable in tracks with a lot of layered sounds. Music Within’s Efflorescence is a great example of what these earphones can do. Even with the reverb-laden, washy atmospherics, you can clearly pick out exactly where the strings are as they harmonize through the melody.

As you might imagine, this also makes them a fine fit for gaming and other entertainment, like taking in a Netflix binge. My usual caveat applies here: enable Dolby Atmos to widen the soundstage and improve positionality even further. With that in mind, I was able to play Battlefield 2042 and World of Warcraft with ease, enjoying accurate positioning and immersive atmospherics without ever reaching for my gaming headset. 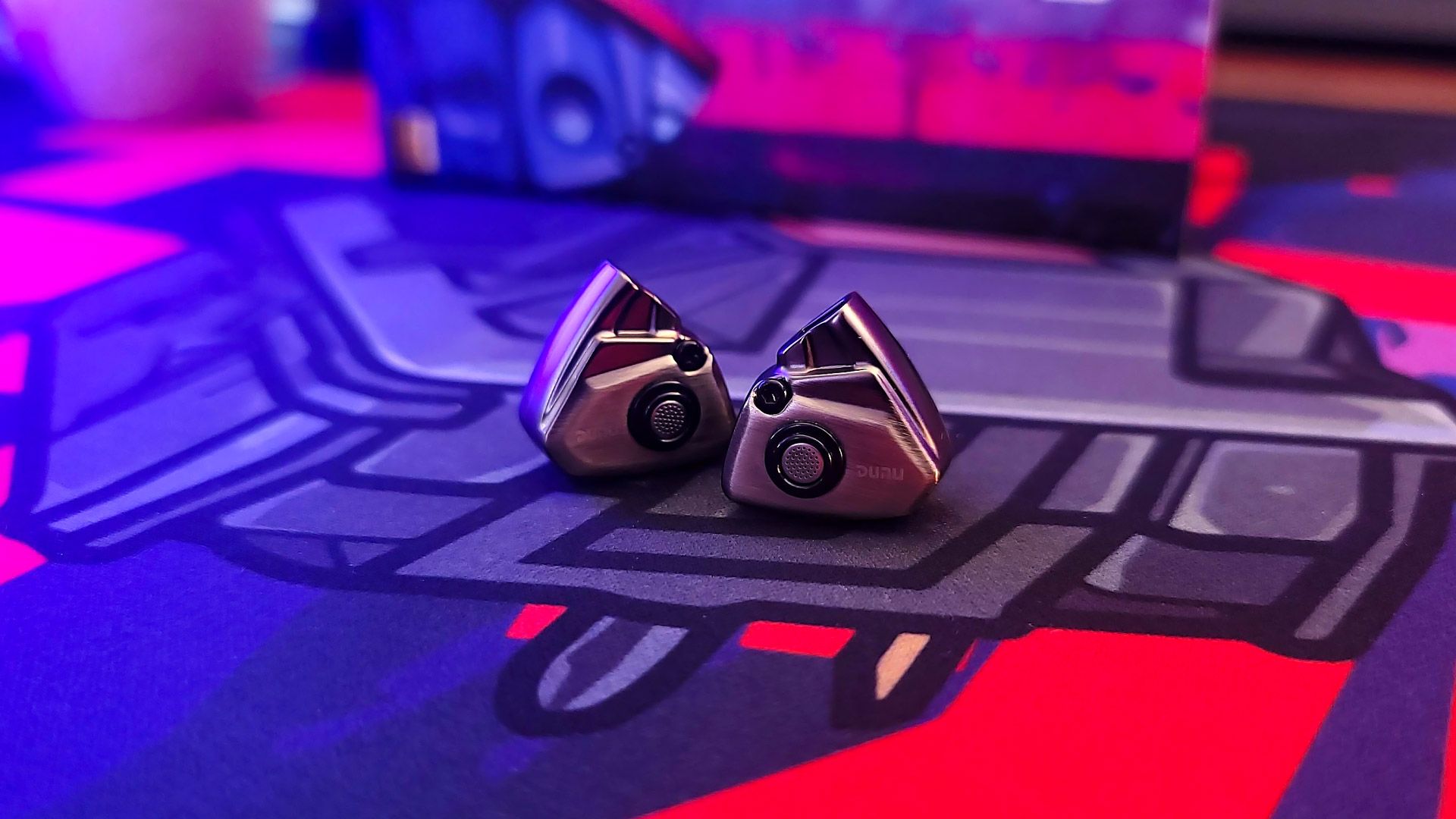 What lots of people really want to know is how they compare to the Moondrop Aria and TinHiFi T3 Plus. Both are the same price, give or take a dollar and were very well received last year. I won’t bother completely rehashing both of those earphones, but I will say that I prefer the DUNU Titan S over both.

Compared to the Aria, the DUNU Titan S has slightly less bass. At the same time, I prefer the brighter tuning and find that I can hear more details in what I’m listening to. And though I haven’t had the issue, many users have reported that the painted shells on the Aria have begun to chip. The Titan S are also more comfortable in my ears.

Against the TinHiFi T3, it’s a similar story. I like the T3 Plus quite a bit. It also has more bass than the Titan S, but it’s honestly an easier win for the Titan in this case. The bass speed and detail is markedly better on it, so even though the T3 Plus has more, it’s not better at all.

The DUNU Titan S is my preferred IEM against its two biggest competitors. It does have less bass overall, but can be EQ’d to meet or exceed either while still maintaining its strengths in detail and presentation. If you need more bass, add it and enjoy the best of both worlds. 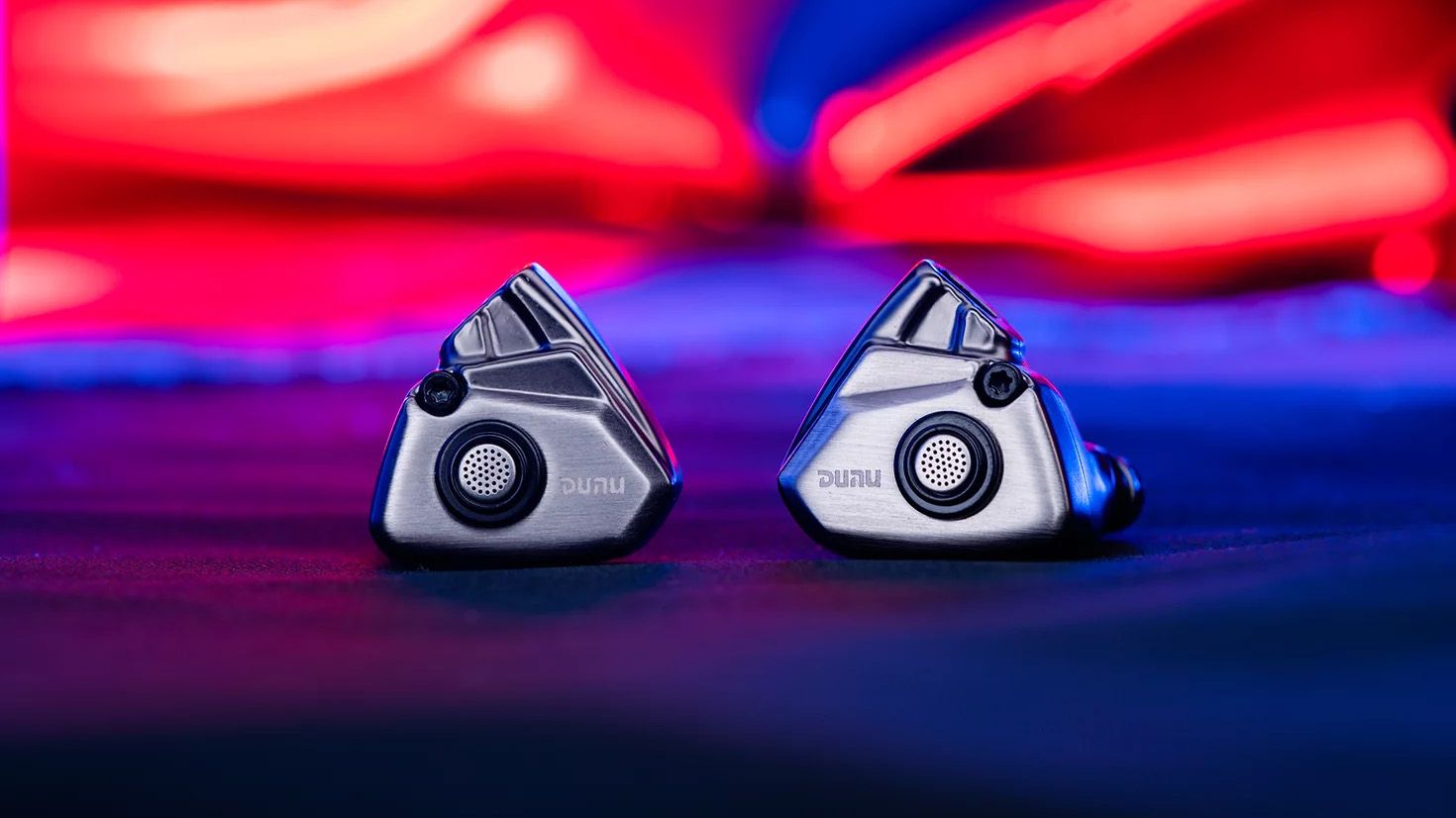 The DUNU Titan S impressed me. They have a unique and, in my opinion, very cool look. They’re comfortable, lightweight, and, most importantly, sound great. If you’re enthusiastic about powerful bass, these may not be the best choice for you without, but they offer solid presence and lots of detail across the whole spectrum. Against its biggest competitors, the DUNU Titan S is the best overall choice.