The Ducky One 2 Mini is likely to be remembered as one of the most influential keyboards of the decade, popularizing the 60-percent form factor in a way no other keyboard or brand had previously been able to do. With that kind of precedent behind it, any successor would have a lot to live up to.

Well, that successor is finally here with the Ducky One 3 line-up. This time, Ducky has launched a total of four layouts side-by-side, including full-size, TKL, SF (65-percent), and Mini (60-percent) with the only differences being color and layout. The new version puts acoustics and typing experience at the forefront, pushing Ducky ever closer to the custom keyboard market whose offerings have become increasingly more accessible over the last year. Complete with hot-swappable switches, sound dampening silicone, powerful onboard programming tools, and Cherry MX switches that now include Cherry MX Clear, is it worth upgrading for? 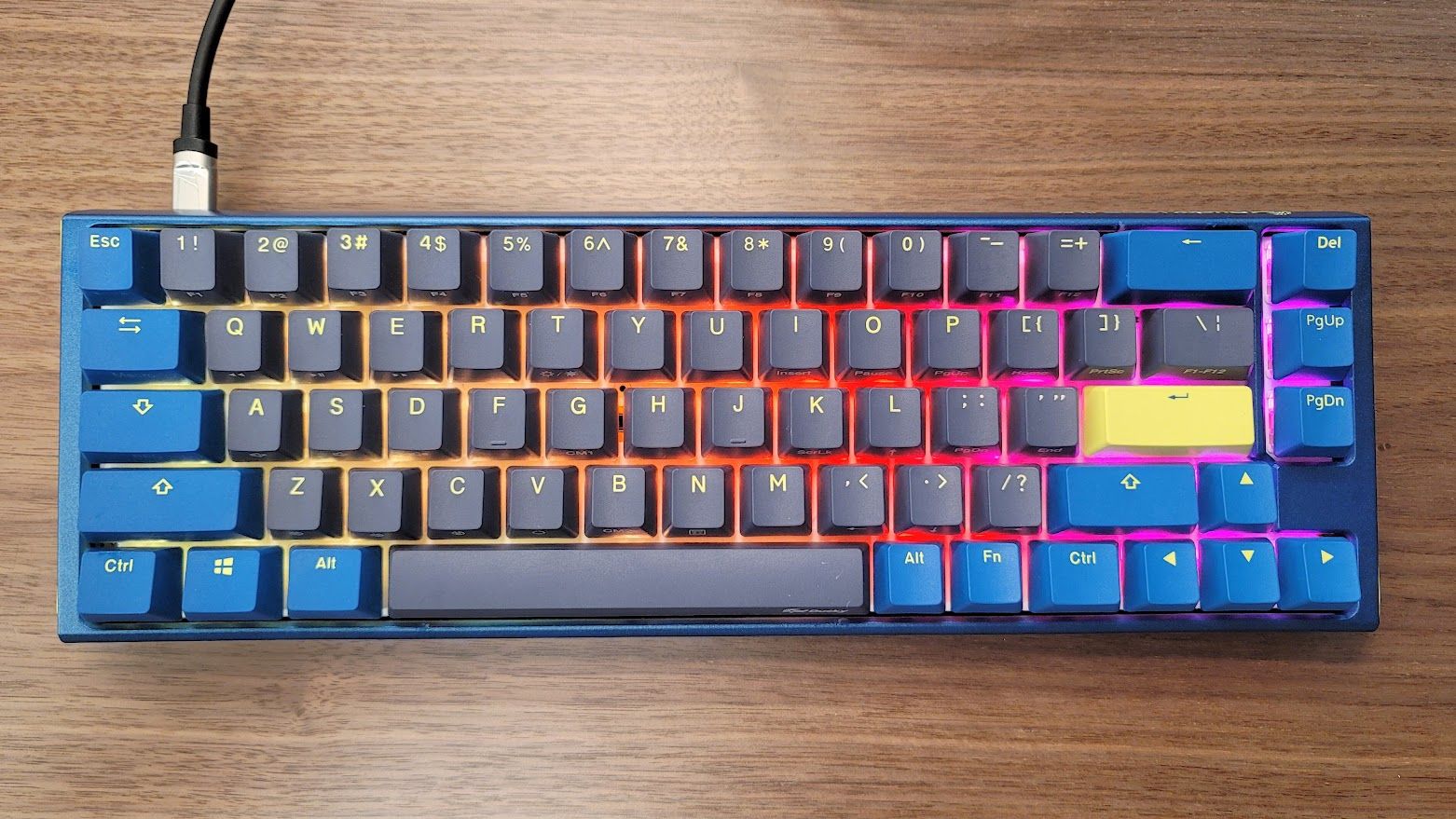 The Ducky One 3 SF is a worthy successor to the Ducky One 2 line. It brings back fan-favorite features like thick doubleshot PBT keycaps and bright RGB backlighting and builds on them. The highlighted upgrades this time around comes in the form of what Ducky calls Quack Mechanics.

Before breaking those down, let’s take a look at the keyboard more broadly. The One 3 line-up includes full-size, TKL, 65-percent, and 60-percent models at launch. The SF is the 65-percent version, indicating that it is only 65-percent the size of a full-size keyboard. The compactness comes from the lack of a Function Row, Numpad, and the center navigation and editing cluster. Unlike a 60-percent, the SF includes dedicated arrow keys and an abridged column of navigation buttons, that include Page Up, Page Down, and Delete. The missing keys are nearly all found on the second and third layer, accessible with the Function button.

The One 3 SF is a small keyboard but it’s a highly functional one. Unlike many competing keyboards, Ducky has absolutely decked out the secondary functions and programmability of the keyboard, free of any software. While it would be great to have optional software, especially for light remapping, it’s possible to record macros, remap keys, create custom lighting schemes, and build up to five custom profiles to switch between for different games and applications. The layout itself is also much more functional for work and gaming thanks to those arrow and nav keys.

All of this is true of the original Ducky One 2 keyboards, which is where the new Quack Mechanics come in. The One 3 is much more focused on delivering a custom-like typing experience, right down to the sound characteristics of typing on the keyboard. It accomplishes this is a few ways that each elevate the use experience. 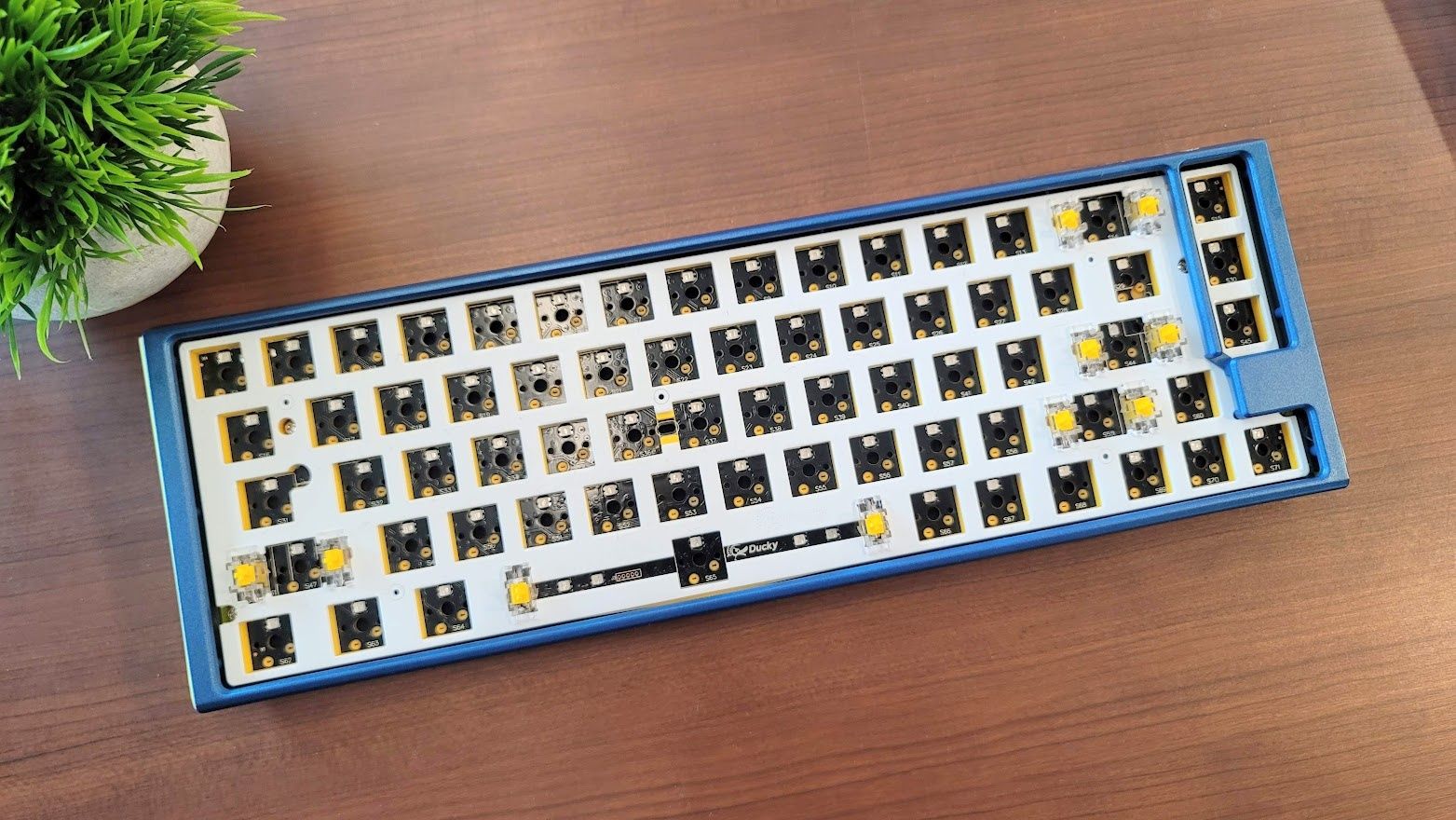 The first is that the keyboard now supports hot-swappable switches — and coincides with the addition of Cherry MX Clear switches to the line-up. More on that later. Hot-swappable switches are a godsend in this day and age as new switches release all the time and can completely change (and elevate) your typing experience. I pulled the stock switches out of the keyboard and replaced them with lubed Gateron Yellows. Next week, I might change them again to NovelKeys Silks. There’s no soldering required, just the simple act of plugging and unplugging the switches.

The next high point is that Ducky has decked the keyboard out with a custom silicone pad underneath plate, sandwiched between it and the PCB. This adds a muting effect to the switches, dampening out typing noises and reducing some of the high-pitched switch noise that existed on the Ducky One 2 SF. Underneath the PCB is another layer of EVA foam to fill up the case and remove and hollowness the might resound in its plastic case. 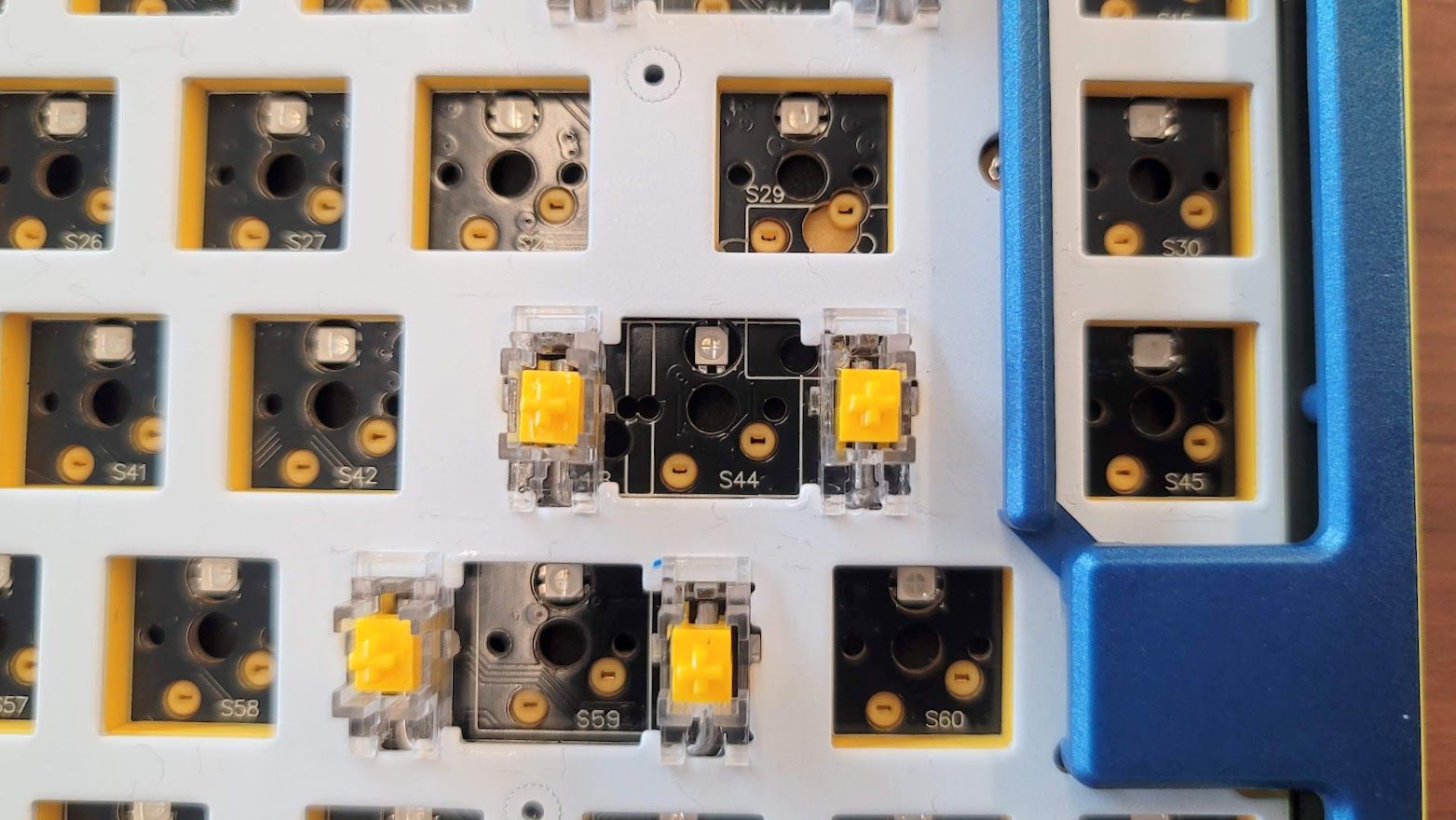 The stabilizers have also been improved. They’re plate mount, like last time, but these are higher quality with less noise and rattle out of the box. They’re also moddable thanks to the hot-swap switches, so I took mine out and added a bit of extra lube to tune them to my taste. Ducky has also gone with claw-less stabilizers, silencing out the bottoms outs a bit more. 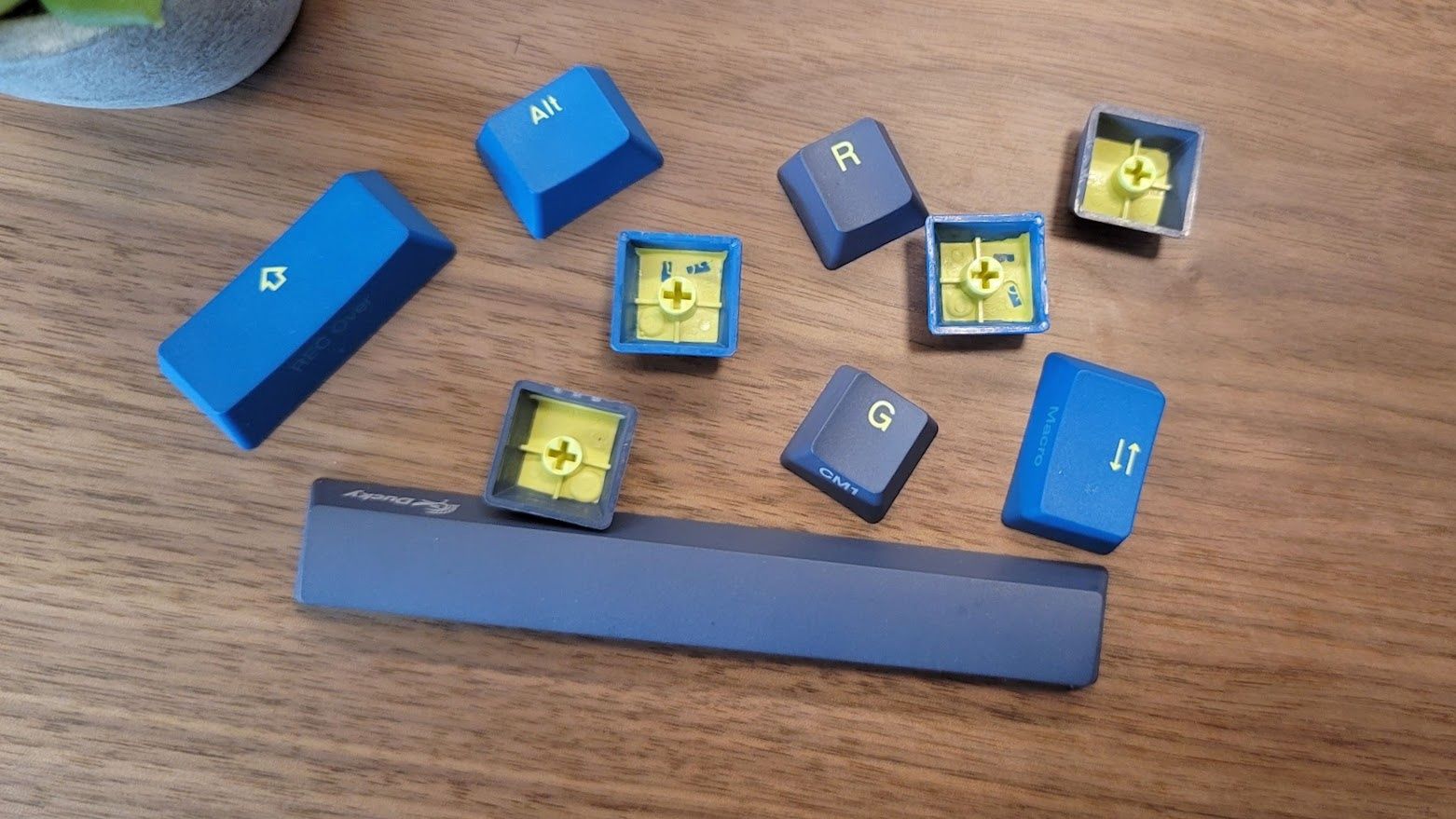 Like other Ducky keyboards, the keycaps are outstanding. They’re doubleshot PBT, so the legends will never fade. There’s a slight texture to their surface that also feels nice under the finger. The update here is that the keycaps are no longer backlit, allowing the keycaps to better match the color scheme of the case.

As usual, Ducky is offering this keyboard with genuine Cherry MX key switches. Available options include Cherry MX Black, Brown, Blue, and Red. For an additional $5, you can choose Silver, Silent, or the new addition, Cherry MX Clear. Clears are an interesting switch: they’re tactile like Cherry MX Browns, but are heavier, taking 65g of actuation force versus the Brown’s 55g. I also found them to be quite pingy like other Cherry switches but benefitted from lubing. 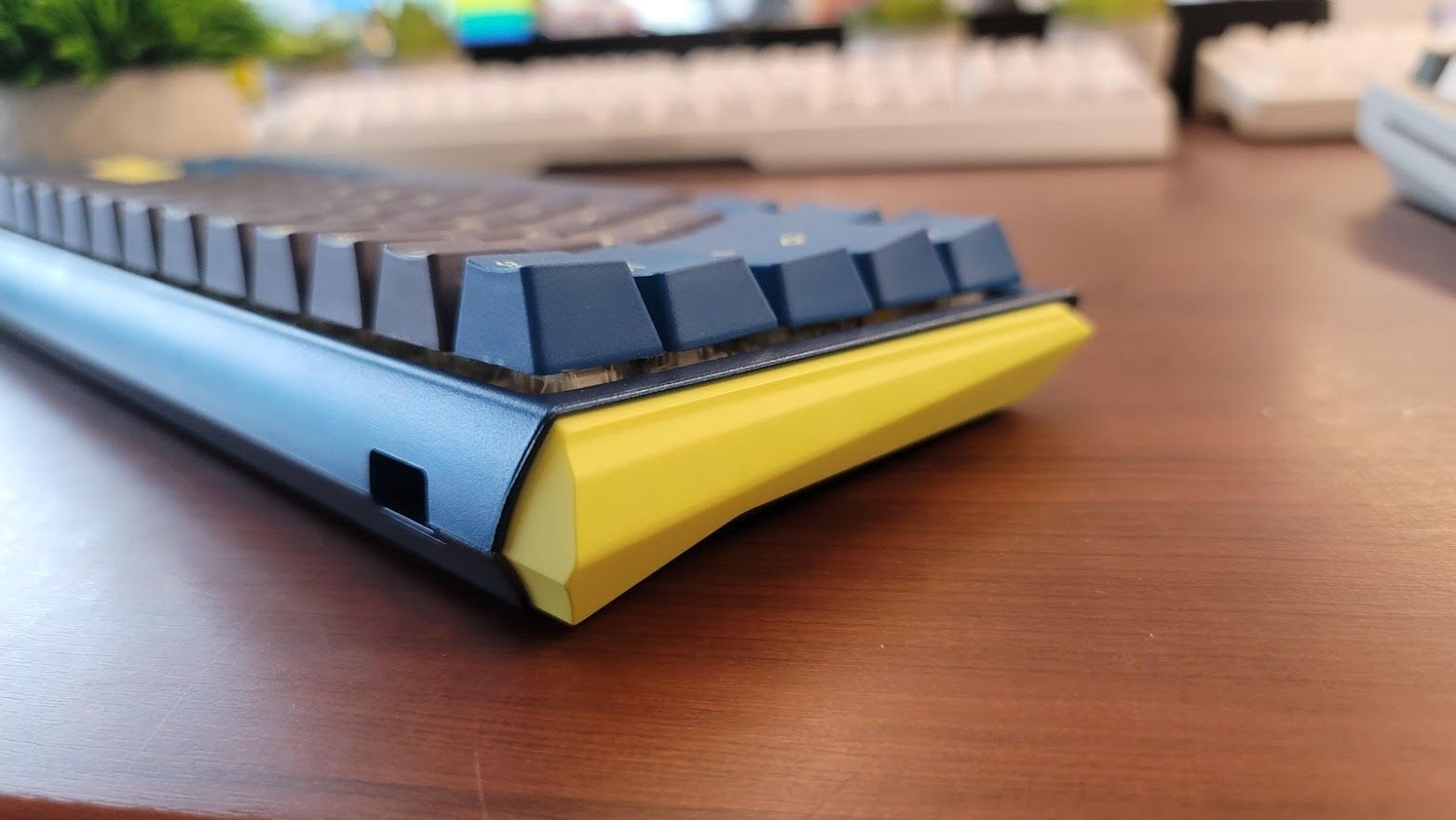 Since the included caps are so good, there’s really no reason to upgrade. The wiser decision is to simply buy the color scheme you like most to start. In addition to Daybreak, the One 3 is available in three other color schemes: Matcha, Yellow, and Fuji. Of these, Fuji would be the easiest to color match aftermarket sets with.

Overall, the Ducky One 3 SF is an all-around solid upgrade that really brings Ducky up with the times.  This really becomes apparent in the typing experience, however.

Where the Ducky One 3 SF really shines is in the typing and gaming experience. The key feel this time around is much better than the One 2 line-up. The silicone dampener and foam under the PCB do a great job of dampening switch noises and removing any harshness from bottom-outs. I was also surprised to find that the deck has a good amount of flex as well. It’s not at the level of a fully gasket-mounted keyboard, but its still quite good.

The acoustics are also much quieter and rounded off. With Gateron yellows, you could be forgiven for thinking you were using a silent keyboard. It really is that impactful. The pre-lubed stabilizers are also largely rattle-free (but I would still recommend modding for yourself). Compared to the last generation Ducky One 2 SF, it’s a big improvement that’s noticeable right away.

I wish that Ducky had offered some non-Cherry options. The ping of a non-lubed Cherry switch really works against the company’s acoustic aims. The Chery MX Clears honestly didn’t bring out the best in the keyboard. If you enjoy linear switches, I highly recommend pairing this keyboard with Cherry Reds or Blacks. Even without, you’ll still find this keyboard to offer a big sound improvement versus the One 2 SF.

Programming and lighting are absolutely high points of this keyboard, as they were in the One 2. The ability to map an macros on the fly and begin using the immediately, sans software, is terrific. Still, if you’re craving the ease of software programmability, you’re still going to be out luck this round. Hopefully, Ducky releases a software package for those gamers who would rather load the software and make the process a bit faster. 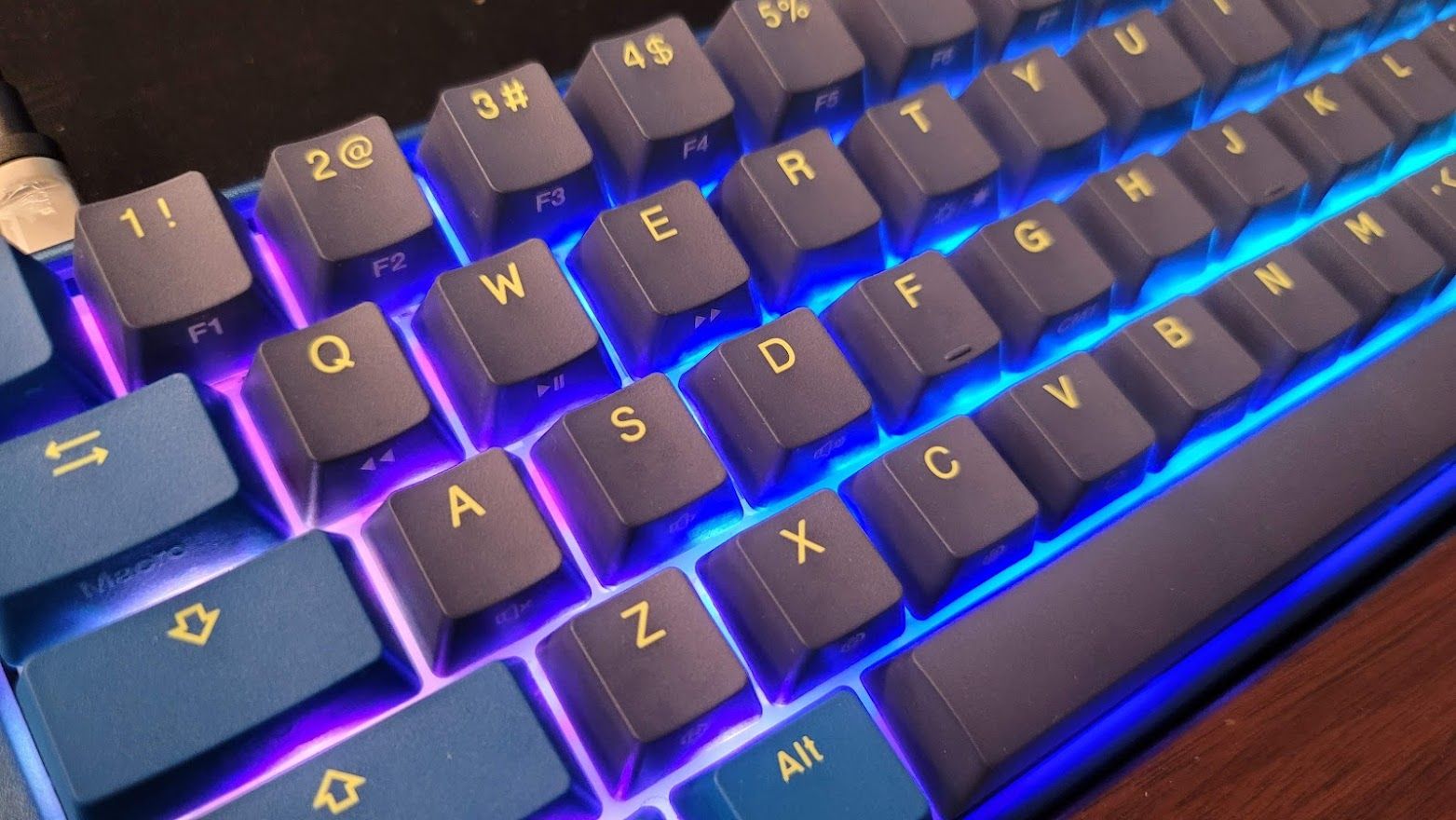 Still, there are tons of options. You can map Windows shortcuts, remap keys, swap key positions (like Caps Lock and Function to keep your hands on Home Row when accessing secondary layers). The lighting is also extremely customizable. There are plentiful preset options, most of which are color customizable with a built-in RGB mixer tied to the Z, X, and C keys. If you’d rather choose from a palette, pressing Function and Spacebar turns the keyboard into a rainbow, allowing you to simply tap the color you would like. It’s innovative and works well.

The keycaps, on the other hand, might be a bit more divisive. They’re of phenomenal quality. They’re thick and both feel and sound great to type on, to say nothing of their improved durability. Since they’re not backlit, however, the lighting isn’t able to shine through the legends. I don’t mind this, but for users who like to game in the dark, it could be a deal breaker. It’s a worthy trade-off for the improved color matching in my opinion, but that’s bound to be a personal call. 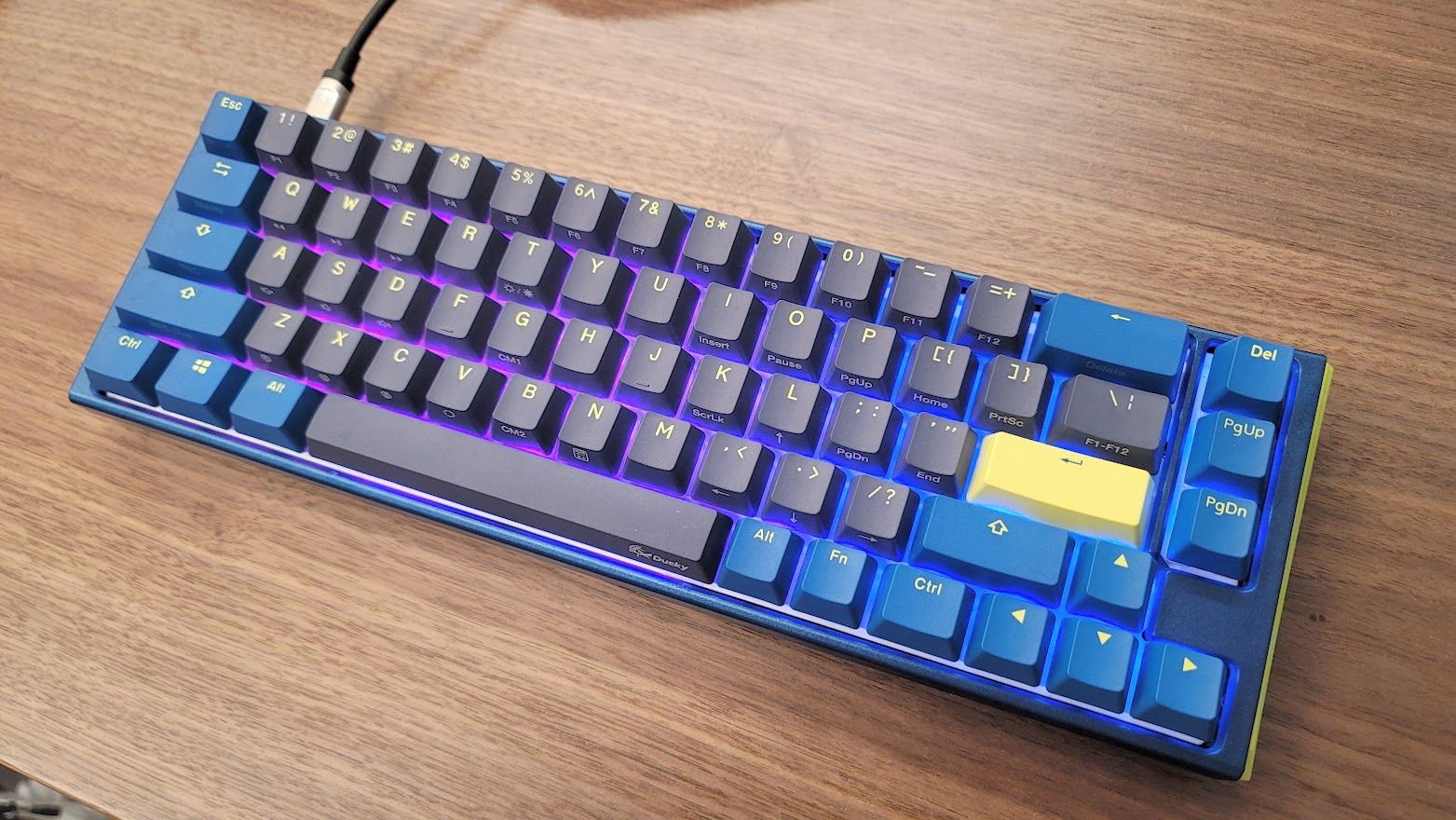 The Ducky One 3 SF is a solid evolution of the Ducky One 2. The market has evolved since that keyboard released, however, and the features here aren’t likely to revolutionize the keyboard industry in the same way. Still, this is a solid board with tons of features, good acoustics, a soft and flexible typing experience, and a brand new (to Ducky) tactile Cherry switch to try. If you’ve been considering picking up a Ducky, the One 3 line-up is definitely the one to buy.

The product described in this article was provided by the manufacturer for evaluation purposes.
8.5Great
Pros
Cons
Tags
Mechanical Keyboards
Peripherals
Ducky
Ducky One 3 SF