Drop and HIFIMAN are old partners at this point and today we’re going back to the collaboration that kickstarted it into the mainstream with the Drop + HIFIMAN HE-4XX Planar Magnetic Headphones. Featuring an open-back design and a spacious soundstage, crisp bass, and lots of detail, these are a prime fit for gaming and music alike. Normally priced at $180, they’re currently on sale through the end of the month for $159. Let’s dive in and see if you should pick them up. 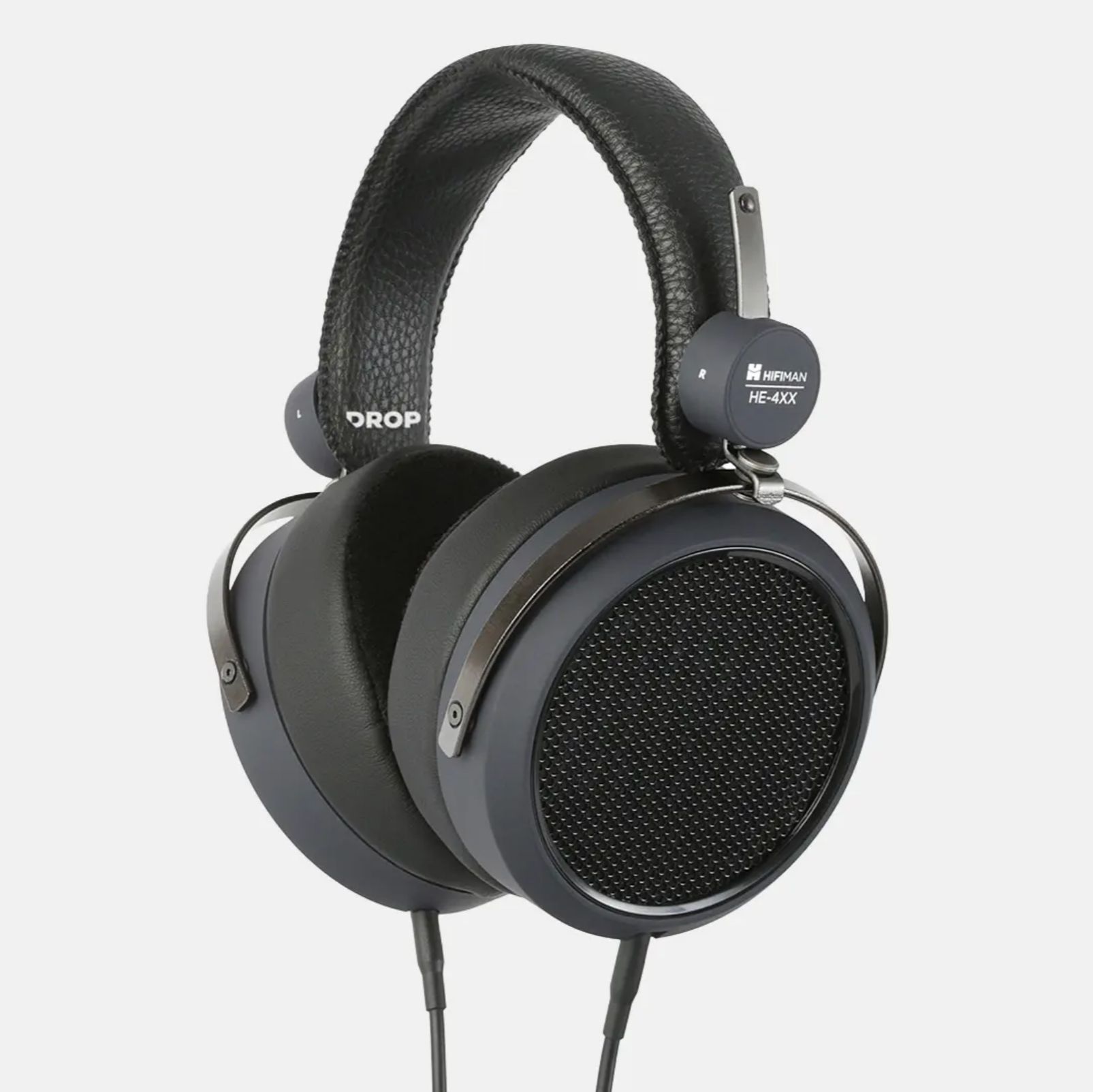 The HE-4XX’s were originally released in 2017 but are still strong contenders here in 2021, even with the release of the HE-400i ($169), HE-400SE ($149), and HE-X4 ($129) models filling in cheaper price points in the line-up. As the most expensive HE-400 version, it’s only fitting to expect the best performance and it lives up to its positioning in the stack — though it’s challenged strongly by the new HE-400SE, so maybe a revision is in order?

As a HIFIMAN mid-tier to entry-level HIFIMAN headphone, you already know what to expect: big, planar drivers and circular earcups with open backs that encompass your whole ear. If you’re new to the world of headphones, welcome, and here’s what that term “planar magnetic” means. 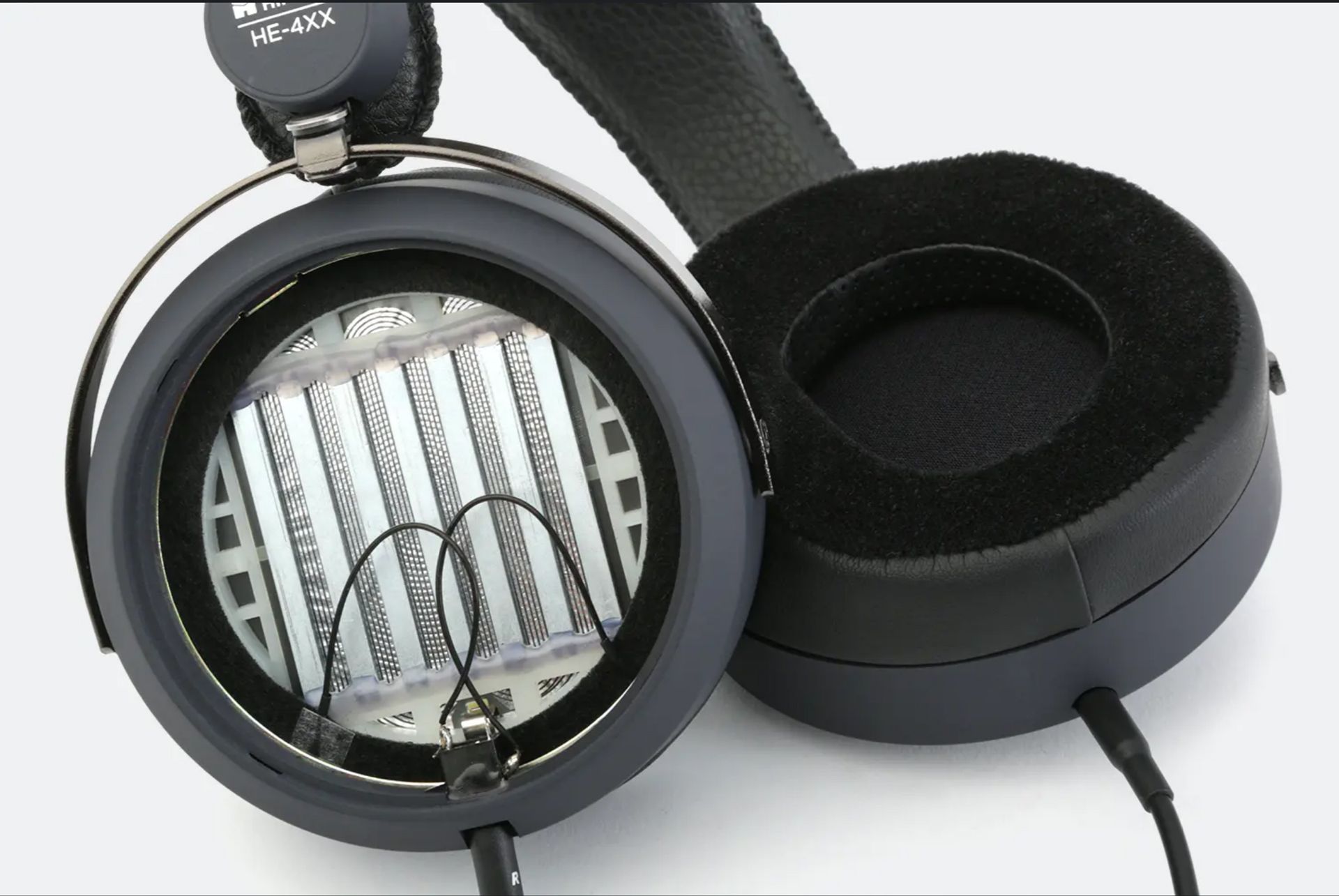 Instead of using a cone-shaped dynamic driver, the drivers inside the HE-4XX are a flat plane traced with filament. Surrounding the plane is an array of magnets. As electricity is passed through the filament the plane vibrates, moving air, but is held in tension by the magnet array. This design offers multiple benefits, including reduced distortion, bigger bass, greater detail across the frequency range, and a larger overall sound — at least in theory. Like any headphone driver, how effective it is depends on how the manufacturer designs and ultimately tunes the driver. A good planar magnetic headphone can sound amazing. A mediocre one can sound, well, mediocre.

The trade-off for those benefits is that planars often require more power to sound their best. That’s true here, though to a lesser extent than many planar headphones. The drivers feature a sensitivity of 93 dB and an impedance of 35 ohms. That means that the HE-4XXs can be run on most computers and smartphones and will produce a pleasing sound. To really meet their potential, however, you’ll need to give them more power through even a modest amplifier, like the JDS Labs Atom. That added headroom tightens up bass response and expands soundstage, but don’t feel obligated to over-spend. As I write this, I’m enjoying the HE-4XX on the CX-Pro dongle DAC which cost a whopping $13 and they sound great. The key takeaway is you don’t need anything separate but the headphones scale well with improved gear, including for gaming. 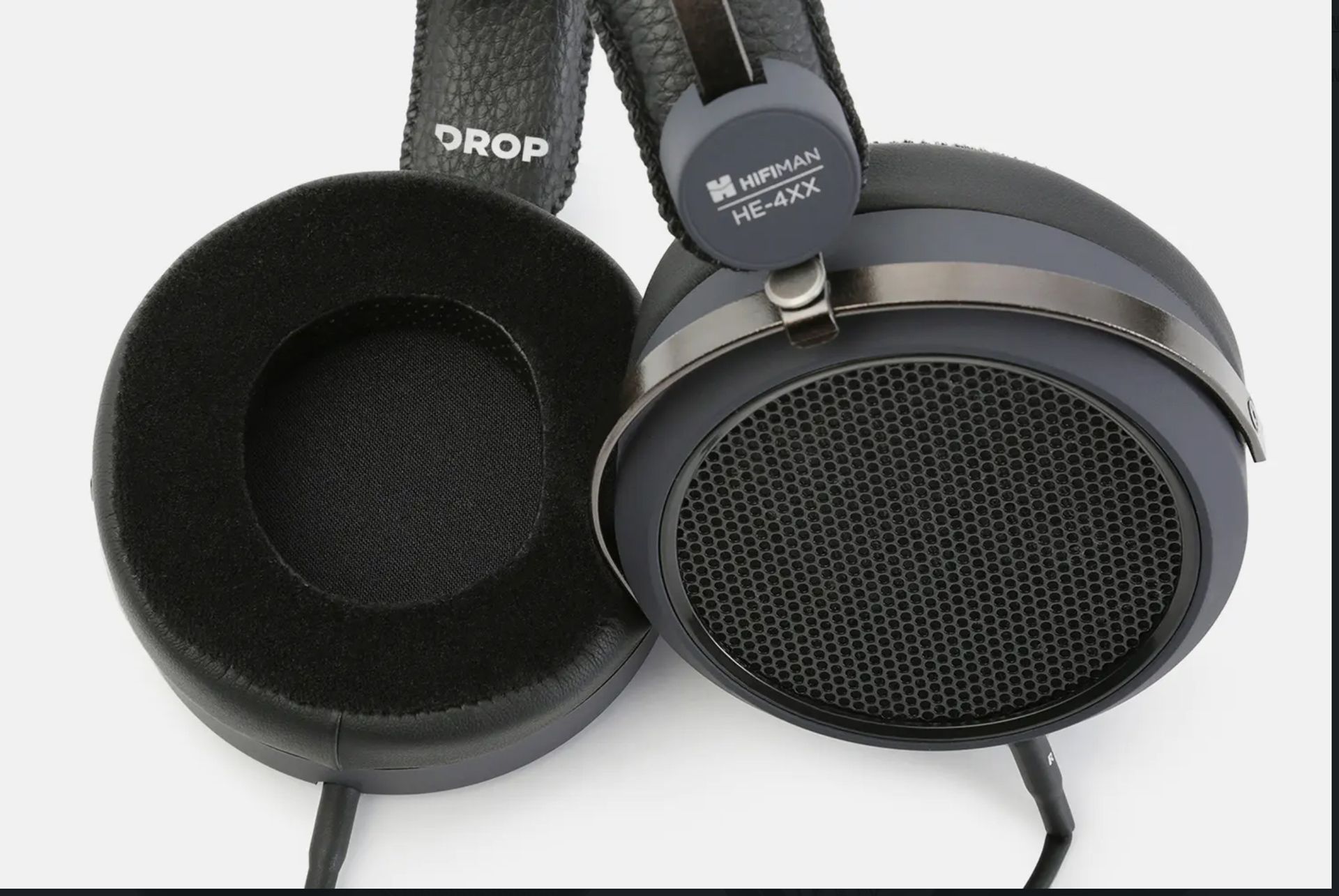 One of the key emphases with this headphone is comfort. Drop plays up the Focus A ear cushions and for good reason: they’re great. They feature velour fabric where it touches your face but have protein leather around the outer ring to aid in sound isolation and bass presence. They’re also angled to better match the contours of your head. The headband is lightly padded and trimmed in stitched black faux leather. The earcups don’t rotate but do tilt on their yokes to improve fit.

Looking at the headphone as a whole, it seems well built and made to last. The headband and yokes are made of steel. If you’re of a mind, you can even disassemble and replace the headband as some modders have done with good results. I would be remiss if I didn’t mention that over the years of its release, a number of users have reported issues with the plastic adjustment clasp that connects the headband to the yokes failing. I’ve only had the HE-4XXs for a few weeks, but I’ve experienced no issues on my unit. I thoroughly examined and tested each of the potential points of failure and couldn’t find any loose screws or worryingly brittle points. Put another way, at this point, it seems as robust as any other headphone but is something to keep in mind for the future.

The one thing that does bother me is the cable. Like many HIFIMAN headphones, it uses a detachable cable with 3.5mm ends for each earcup and to connect to the device. The cable itself is fine, it’s just too short. Connected to my GoXLR in the middle of my desk, sitting back in my chair leaves very little slack for comfortably routing it around my mouse and keyboard. Instead, I’m forced to work around it. Fine for connecting to a smartphone in your pocket but I would have liked to see a slightly longer cable for desktop setups. 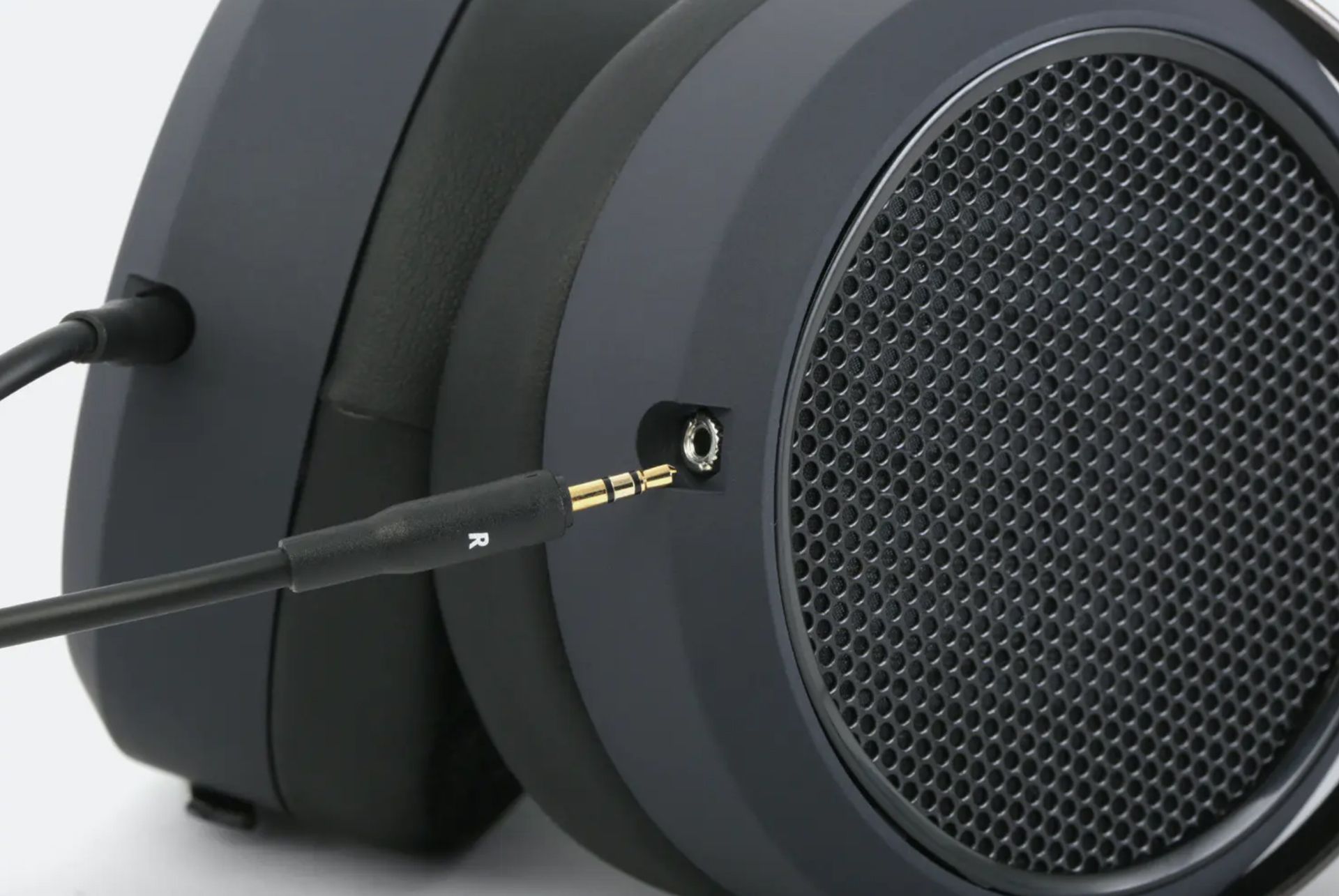 The HE-4XX is a generally comfortable headphone. The weight is well-balanced, which allows the headband to do its job well for one to two-hour stretches. Beyond the two-hour mark, I did find myself experiencing some hot-spotting on the top of my head and would need to take a break or reposition the headphones every 45 minutes or so after. I do have short hair and am particularly sensitive to hot-spotting, so your mileage may vary, especially if you don’t keep a close crop like I do. 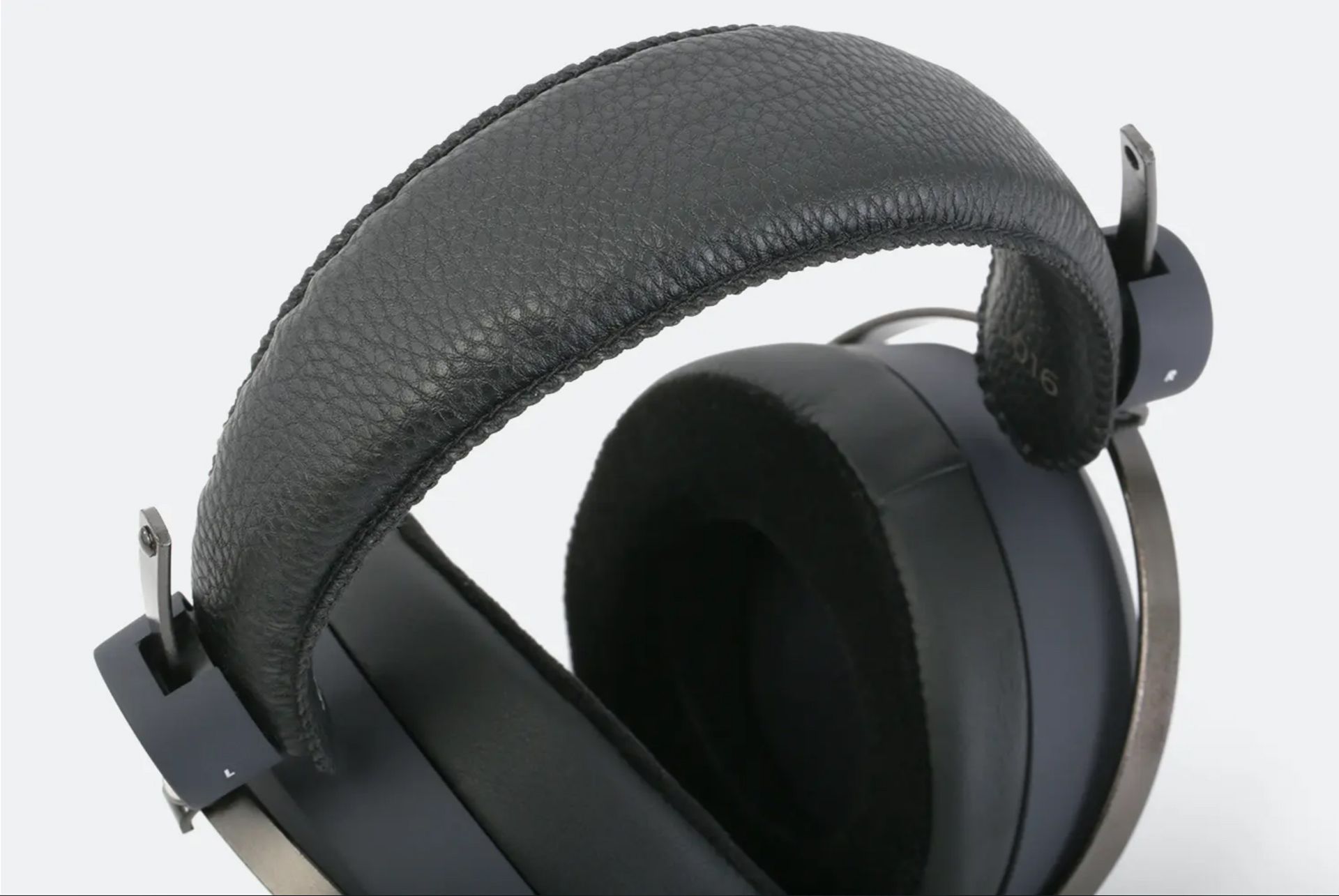 The cushions are very comfortable. I love the hybrid design. The feeling of the fabric felt nice against my skin while the leather outers helped isolate outside noise. The clamp force was moderately high, so the headphones stayed in place well but the pads were soft enough to ward off jaw or head pain. I also appreciated the slight angle of the pads and found it to be a better match for the contours of my head.

Taken as a whole, these headphones offer good comfort, and repositioning every now and again is something I found myself doing anyway.

The first thing I noticed about the Drop + HE4XX is the soundstage. Simply put, under $200, these headphones offer one of the widest soundstages you’re going to hear. The imaging and presentation feels very realistic. It’s not quite to the “speaker-like” levels of HIFIMAN Sundara or Ananda, but it outperforms the likes of the HD6XX and HD58X from Sennheiser, which is darned impressive.

The bass response is also excellent. Planars are well-known for the potential bass they can deliver. I say potential because it’s not a given: bass response has to be tuned and designed around to be truly impressive. The HE-4XXs have a fast bass response. Notes hit and stop exactly as they’re supposed to without any lingering haze. “Motley Crew” by Post Malone was a great demonstration of the speed and detail the headphones can deliver. Without being overwhelming, the bass line hit and maintained its staccato delivery, lending the song punch and impact that can sometimes fall apart on lesser headphones.

The mids and highs are also well done. Testing the headphones, Spotify went through the Top 50 from Post Malone to Olivia Rodrigo’s “driver's license” and the difference was stark. They transitioned from punchy and hard to delivering piano notes and Olivia’s vocals with gentle sweetness. The spaciousness played beautifully into this. Notes had a very natural decay that sounded realistic and somehow intimate at the same time. The dynamics on the HE-4XXs are outstanding.

At the same time, in a back-to-back listening test with the Sennheiser HD-58X Jubilee, I have to give the edge in overall detail to the Sennheisers. There’s ever so little more texture in the higher notes. It’s subtle but present. The imaging on the HE-4XXs is much better, however, so it’s a bit of a wash between the two headphones in this department.

Another natural comparison is against the HE-400SE which I reviewed earlier this year and very much enjoyed. The two headphones are similar in design and sound profile, but the HE-4XX is has a more energetic sound. There’s more pop and liveliness that makes them more fun to listen to. Both headphones are great — the HE-400SE is a great value in comparison — but if you can afford to spring for the 4XX, it’s a more compelling listen.

For gaming, the HE-4XX’s performed very well. The quality difference from even a nice gaming headset is stark. I had the Sennheiser GSP-500 on hand and the HE-4XX outperformed it in every way. Even though it’s not designed for gaming, the sense of space is imaging makes it a great fit for even twitch-based shooters where positionality matters. One of the benefits of the 4XX’s big planar drivers and open backs is that every sound source has room to breathe, so it’s easier to pick apart the layers of sound and where each is coming from, especially with Dolby Atmos enabled. 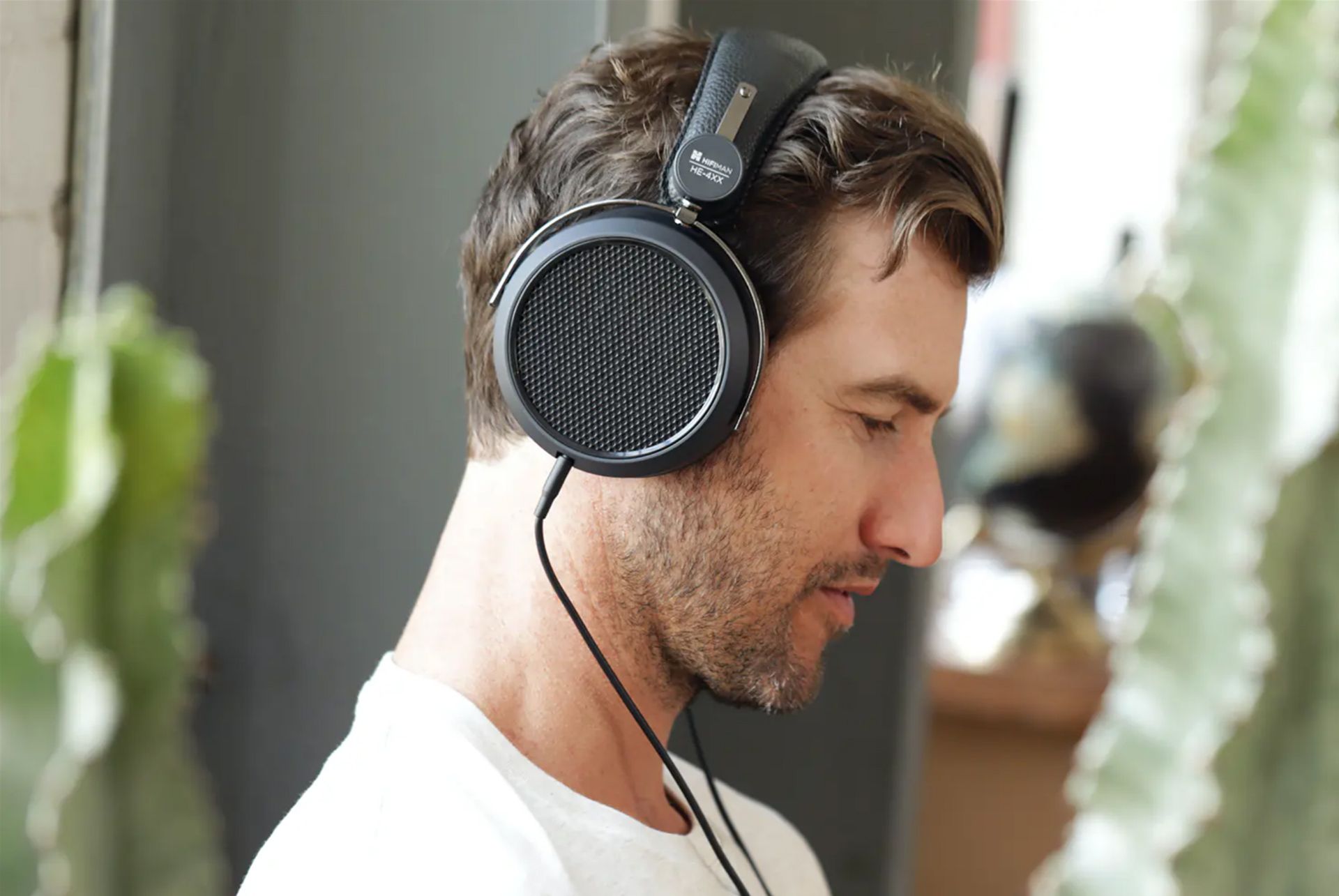 That said, if you’re looking for an audiophile headset that emphasizes gaming to an even higher degree, the Audio-Technica ADG1X is an even better fit that can be found for a similar price, albeit with the sacrifice of some bass. Which is where I circle back around: the HE-4XX is just very well-rounded. It’s not the absolute best in any one department but it hits the right notes to act as an exceptionally good “all-around” headset for music, gaming, and entertainment in general.

In a way, the Drop + HE4XX’s feel like one of the most important headphones in Drop’s line-up. Since its original release in 2017, it’s been a go-to recommendation for users looking for an excellent headphone under $200. Arriving late to the party, I’m happy to finally be able to see what all the hype was about. Indeed, if you’re looking for a great headphone for music, gaming, and everything in between, this is a solid choice that won’t break the bank. The Drop + Sennheiser HD58X has a slight edge in overall detail, but the HE-4XXs have a wider range that more than makes up the difference. If you’re on a budget but want a headphone that’s going to sound great with pretty much anything you throw at it, the HE-4XX is a great option.

The product described in this article was provided by the manufacturer for evaluation purposes.
8.5Great
Pros
Cons
Tags
headphones
audio
HIFIMAN
Drop