Standing desks can be, and largely are, pretty expensive. Desks, in general, can be costly, so finding one that doesn’t break the bank can be a challenge. A cheaper desk usually means flimsy, low-quality, and unreliable in the long term.

Devaise aims to break the mold. We took a look at the Devaise Rustic Brown Electric Standing Desk to see whether or not a sub-$300 standing desk would be worth the money or simply whether it’s worth spending a little more to get into one of the big names in the industry.

At first glance, when the box arrived at my house, I was shocked at how small the packaging was. I thought at first it might have been the wrong desk, as the box was much narrower than the dimensions listed on the website. However, when I opened the box itself, I was happy to see that this wasn’t the case.

One of my original office desks was a small, cheap table from IKEA – something that cost about $24 and did its job (it’s now my kitchen table, in fact). The dimensions were about on par with the Devaise desk, so I knew that the desk would work for what I needed: room for a PC monitor, keyboard, mouse, and a few accessories. 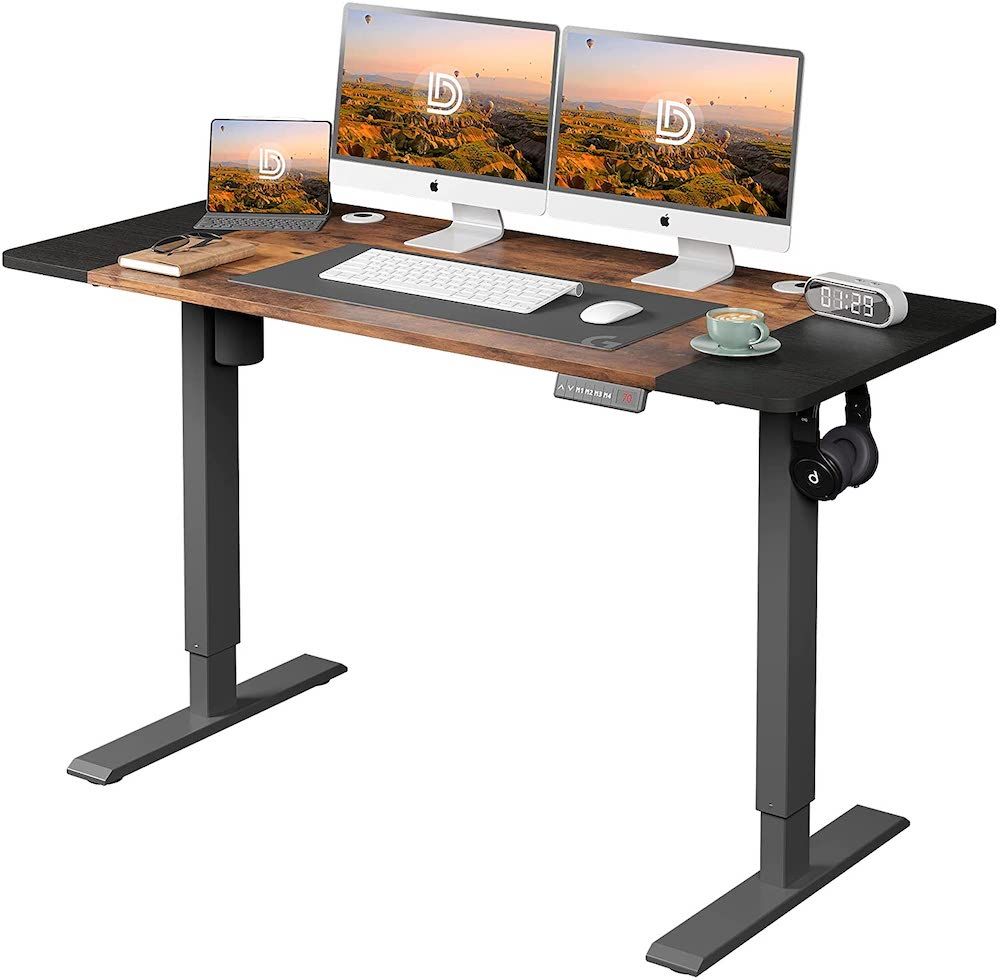 Setting up the desk was a bit more convoluted than I would have liked, especially compared to some of the more expensive options. I commented to my roommate as I was putting the Devaise Standing Desk together than it was interesting that the cheaper desk had more involved in putting it together. From setting up the legs, building the overall frame of the desk, to even putting together the top of the desk from four pieces of rustic-looking wood, the whole process took about an hour. Thankfully, it wasn’t hard, and the instructions were pretty easy to follow.

I also appreciated how the desk was packaged and laid out to make total sense. There wasn’t a spot where I felt really confused about where a part when or how it connected with the desk proper. Everything was straightforward – it was just time-consuming since there were so many parts to put together.

For the price, I was half expecting cheaper quality frame materials. Thankfully, this isn’t the case. The steel frame is sturdy and heavy, which is exactly what I want from a desk that will be, in a sense, getting a workout beyond just holding my PC. Nothing felt cheap, even if the setup was a bit convoluted. Each leg weighed quite a bit, making me confident I wasn’t going to buckle the desk under the weight of my PC and monitor set up.

Only one leg has an actual motor on it, and it operates by turning a crank running the length of the desk from one leg to the other. Installing that was relatively easy, but it’s a shame that the desk isn’t driving upwards with dual motors.

As a result, moving the Devaise desk up and down doesn’t feel nearly as smooth as the Cougar standing desk or my Autonomous AI desk. It’s not as slow as I anticipated it when I first looked at the desk, but it’s not as smooth as some of the other options out there.

I do like how responsive the keypad is, though. Compared to the much more expensive Cougar desk we reviewed recently, the Devaise feels almost instantaneously responding to a height adjustment. It’s also not convoluted to save a preset in one of the four memory settings. Hold down the memory button you want to store your current height in, and it does it.

Thankfully, the desk does come up to a relatively comfortable height. I’m 6 feet tall, so having the desk reach a max height of just over four feet was enough to work during our review period comfortably.

What isn’t comfortable are the sharp edges of the desk surface. While I’m not expecting the most ergonomic fit for the price point, I wish the edges of the surface were rounded, so they don’t dig into my forearms when I rest them while typing. While I know you don’t exactly what your arms to rest directly on the surface, it happens more often than not. Having the desk cut into my forearm after long work periods wasn’t the best feeling. 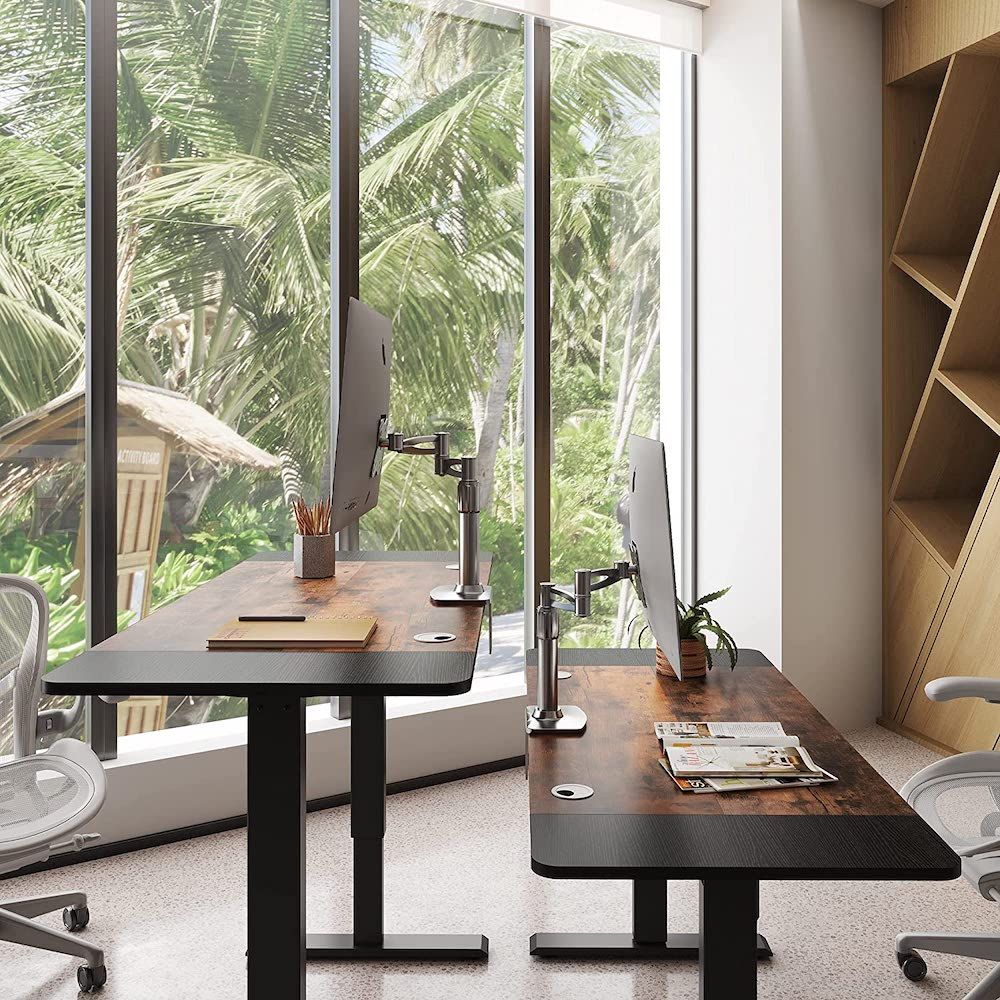 This was really only an issue while standing, but it was still bothersome. While my Autonomous AI doesn’t have the most ergonomic design for its corners, being rounded goes a long way toward maximizing comfort while working.

At first, I thought the narrow desk would also hamper my workflow. I’m used to having multiple devices on my desktop, from audio mixers, multiple monitors, Stream Decks, and more. Thankfully, while it is smaller than my Autonomous, which acts as my primary workstation, it didn’t feel cramped. Mounting monitors on an arm would free up some space, but it didn’t feel too bad even then.

Suppose you have a less cluttered workstation than me, even better. I found myself working at this desk with my Macbook and iPad, mostly, and it worked beautifully. The desk also has two ports in the back for cable management, and it comes with clips you can stick to the underside to hide and route cables as well. While I wish it came with its own built-in surge protector, it’s not hard to tack one on the underside and route the power cables to the wall as needed. Also, the headphone hook on the side of the desk is a really, really nice touch.

Visually, the desk took a bit of getting used to at first. I love the rustic brown wood the middle of the desk has. At a glance, it looks like a nice, high-quality slab of wood as the desktop. It draws the eye, even when stuff is on the surface, cluttering it up slightly.

The ends of the desk are a dark black finish, which doesn’t look bad perse, but it just seems out of place. I would have much preferred the whole desk surface to be one finish, just for the uniform look. However, it doesn’t look bad, and it fits in with my furniture.

The Devaise Rustic Brown Electric Standing Desk is an excellent option if you’re looking for a cheaper option than some competition. While it’s a single motor moving both legs, which does make me wonder about the overall longevity of the desk after years of use, it works just fine. Sure, it could be smoother, but it gets the job done.

I do like the look of the desk, even if I wish it were all a single, uniform finish. While a bit more time-consuming than other desks on the market, setting up wasn’t hard, and the instructions were easy to follow. Also, never underestimate a long Allen wrench, which Devaise thankfully provides, making it easy to turn regardless of the angle.

For $240 on the Devaise website (even cheaper on Amazon), it’s not a bad price for what is a great quality package. While for some, it might not be a deep enough desk for your setup, if you’re looking for a workstation for your remote office or even just a standing desk to break up long gaming sessions, the Devaise Rustic Brown Electric Standing Desk is not a bad way to go for the money.

Full Disclosure: Product described provided by manufacturer for the purposes of this review.