A few months back, we revisited the Sound Blaster Katana V2 from Creative Technology and I echoed Chris Coke’s sentiment in our review.I believe “wow” was the word we used to describe it –  it was nothing short of impressive! The Katana V2 produced high audio fidelity that truly fills space without being loud for the sake of being loud.

Since I was operating in a smaller space for my revisitation of the soundbar and subwoofer combo, I was initially concerned that I would need to keep the volume rather low to keep from overpowering the room. That was not the case, but it did raise a question: what if the Katana V2 was too much power for my space? Well, Creative Technology has an answer: the Katana V2X.

We got out hand on one and we’re going to share our experience with this lower-powered audio powerhouse!

If you are looking at the box art alone, you are probably wondering if we are talking about the same exact product we reviewed before. If that’s you, let me answer that question on the front end: you’re not wrong in that assumption; they are nearly aesthetically identical with a few distinctions. Like the Katana V2, the V2X comes with a soundbar – which shares the same chassis design with a slightly different finish, similar inputs and outputs, identical accessories, and a form factor, as well as a satellite subwoofer that is slightly taller, but more slender than the V2.

To get deeper into the specifics, the Katana V2X soundbar is equipped with two 63mm (2.5 inch) mid-range drivers and two 19mm (¾ inch) tweeters handling the higher frequencies. The redesigned subwoofer equipped with a 133mm (5.25 inch) driver. Like the V2, the sound bar for the Katana V2X is roughly 24-inches long, making it the perfect size to slide under most modern monitors. 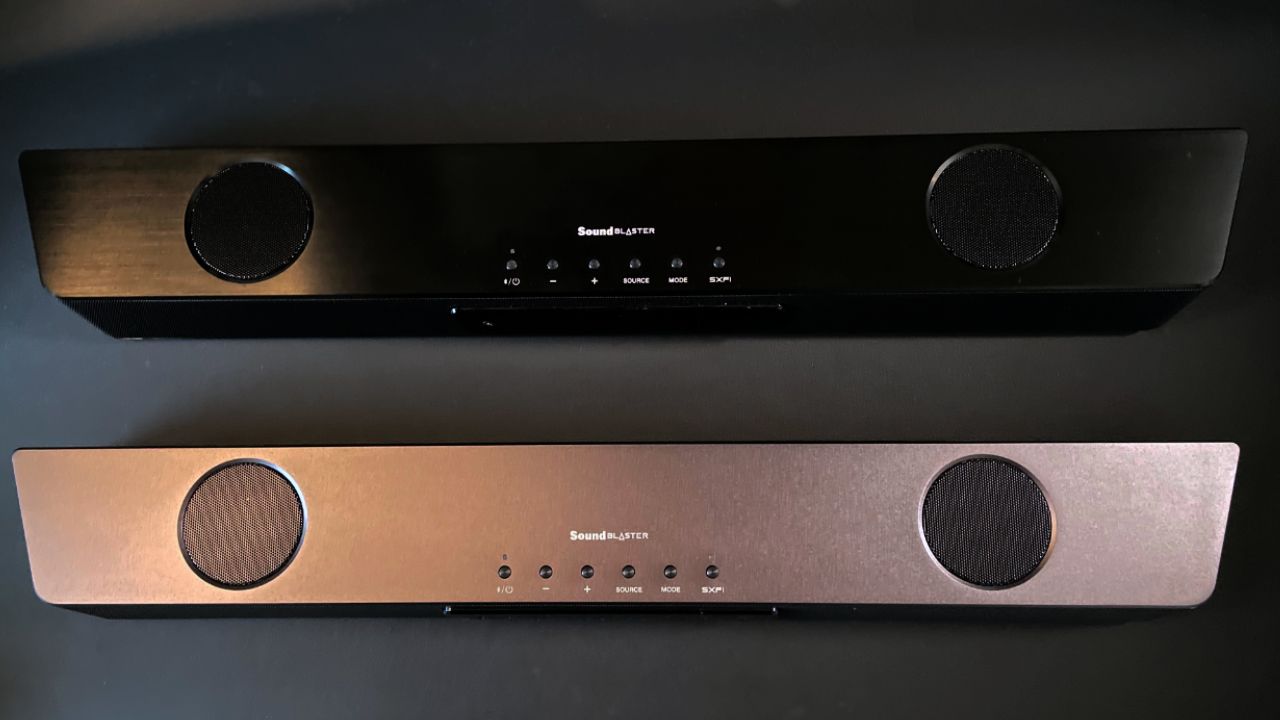 As far as power goes, this is where the Katana V2X sets itself apart from the V2. Rather than scaling output up, Creative took things down a notch. The Katana V2X provides up to 90W RMS (or Root Means Squared - the average output over time that a speaker can operate at without damaging the device) and a peak out of 180W. That’s 36W down from the V2’s 126W RMS and 72W down from the V2’s peak power output. In a tech landscape where devices are consuming more and more power, this is a welcome change!

Now, you may be wondering if that’s enough power – has Creative reduced it too far?

Much like its nearest predecessor, the Katana V2X produces a wildly full sound. Even with the lower overall power, the frequency range is the same (50Hz - 20kHz) and it comes equipped with the same brains as the V2, making customization incredibly simple. Easily switch from music to movies to gaming at the click of a button – either on the soundbar, the included remote control, or via the Creative app.

The companion app allows users to adjust settings using Creative’s Acoustic Engine. Set your preferred depth of surround sound, use the audio Crystalizer to sculpt music, to enhance in-game dialogue, or set a Smart Volume to intelligently lower volume as needed. Like the V2, there are six user preset banks that can be stored and recalled at any time with the remote or the companion app.

As mentioned before, the Katana V2X system has the same versatility in connection options as the V2. Connections include audio through USB Type-C, optical-in, analog auxiliary, Bluetooth 5.0, Creative’s SXFI-out, and HDMI ARC. If your desktop is a multi-input space, this is a great feature. The V2X also has a headphone jack in the front of the soundbar in case you need to take your listening experience into a more personal realm.

The Katana V2X is also equipped with programmable RGB. This can be controlled with the Creative companion app as well. 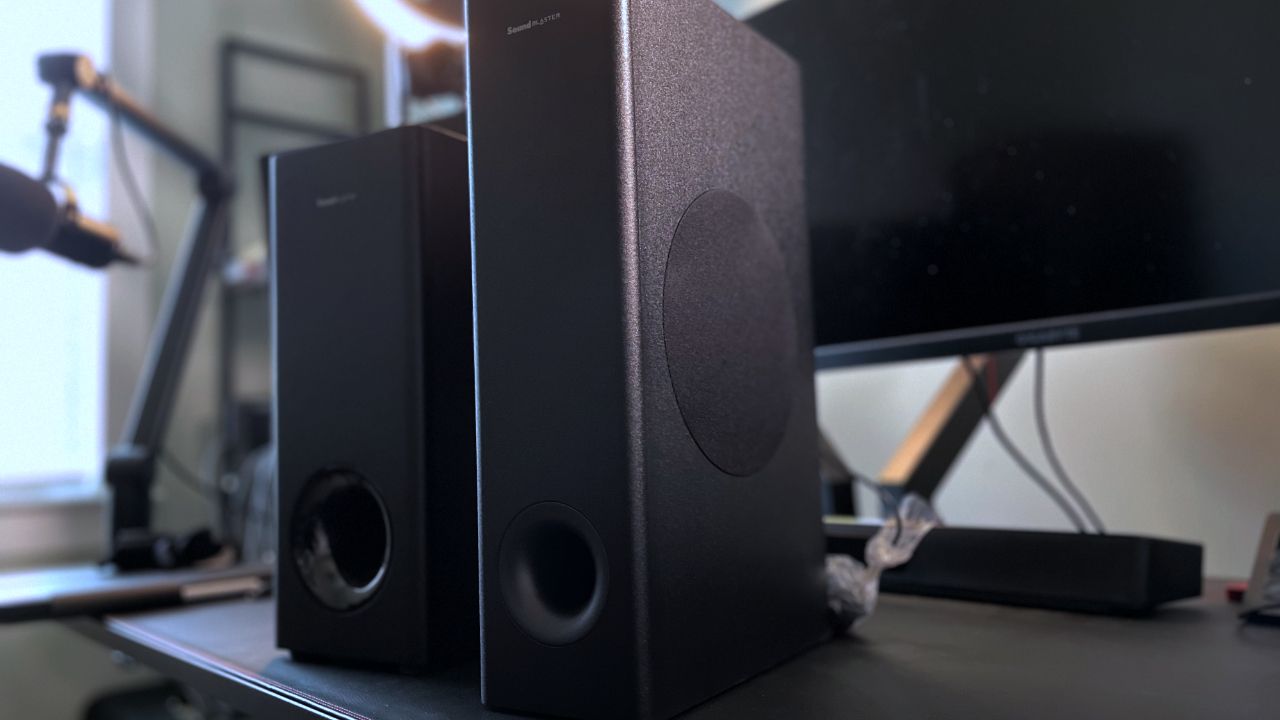 My Experience with the Katana V2X

I am going to shoot straight here: if someone had swapped out the Katana V2 with the V2X, I probably wouldn’t have noticed a difference. Don’t misread that: that isn’t a slam against the V2, but a praise of how good the V2X is in comparison. With an identical desktop form factor, the Katana V2X still fits center stage in my gaming space while the lower power allows me to turn my volume up without concern that I am overcrowding the space with sound.

I did side-by-side listening tests between the V2 and the V2X, but I did them with an added factor: listening to the audio samples along with me was my dad – a seasoned musician and prolific bass guitar player. He happened to be visiting when the Katana V2X arrived, so I put his senses to work. His ear is far better than mine when it comes to listening to music and picking out parts to play. After spending an afternoon running through a gamut of tests, he ALMOST walked out of my house carrying the V2X with him!

The frequency range of the V2X provided a rich audio experience for a multitude of uses – whether gaming, watching videos, or listening to music. Using the Katana V2X in Destiny 2, the sweeping, symphonic soundtrack is just as immersive as the Katana V2 and the sound of gun fire is equally satisfying – especially while utilizing weapons like hand cannons! Speaking of soundtracks, I fired up Persona 5 Royal for Shoji Meguro’s masterful (and bass guitar heavy) compositions. Again, the Katana V2X did not disappoint.

While its power is slightly lower than the V2, the Katana V2X still feels like it fills the room and produces an articulate lower end without being overly loud. While I did have to turn the volume up higher on the V2X, I never hit a point where I felt like I was pushing the system too hard or distorting sound to get the volume I needed.

Since the overall design is quite similar, I do have to reiterate the few quirks that the Katana V2X has that aren’t my favorite things.

The first is probably a bit more of a fussy thing, but when you try to keep cables managed, this is a big deal: because the Katana sits underneath my monitor, it does not afford a good path for my keyboard cable. There aren’t any “feet” per say under the soundbar to run the cable, so it obstructs a portion of the RGB lighting. It’s a super picky thing, for sure, but a consideration if you like your desktop tidy.

The other quirk is a little more irksome. Both the Katana V2 and V2X have an energy saving mode that has a fairly long time-to-wake. It’s irksome for me because I tend to be a multi-tasker – I’ll turn my PC on, get some work started, walk away to another project, and come back. It’s not terribly long, but it’s long enough to notice. 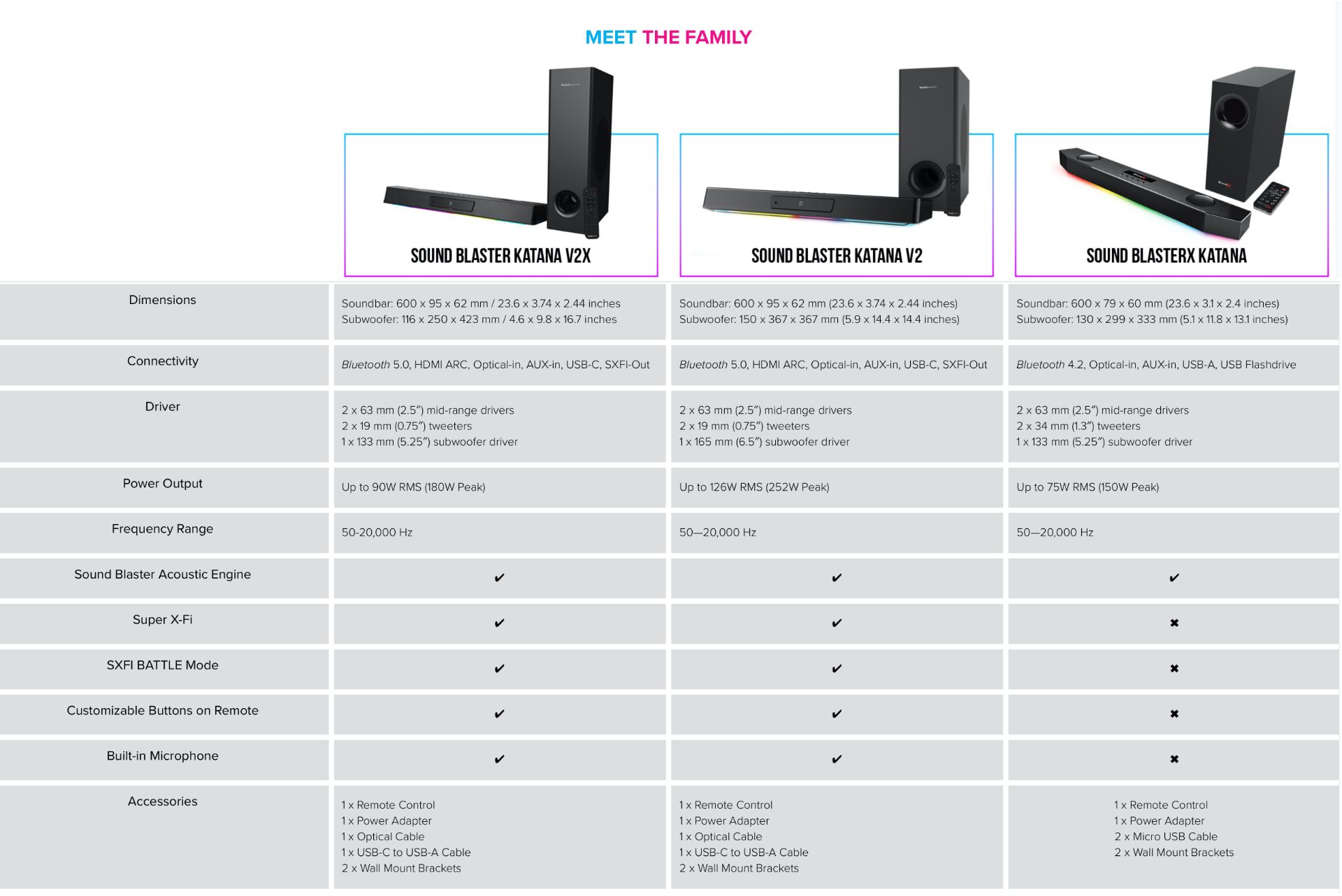 Which One Is Right For Me?

Now, I imagine that there is at least one person reading this that is asking themselves this very question: between the Katana V2 and Katana V2X, which one is the better buy? Here are my thoughts after spending a considerable amount of time with both.

If you are looking for a soundbar and subwoofer combo to serve in an office- or game room space with a desktop PC being the focal point of the setup, the Katana V2X is the better choice. While it is a lower powered set, you will find that the V2X’s audio articulation is more than enough for the immediate range you will likely be sitting within.

However, if you are looking for audio enhancement for a gaming or home theater setup that centers around a TV, the Katana V2 would be the more ideal in that setting. The extra power will help make up the distance between you and the screen to keep you immersed in whatever form of entertainment you find yourself engaging in. 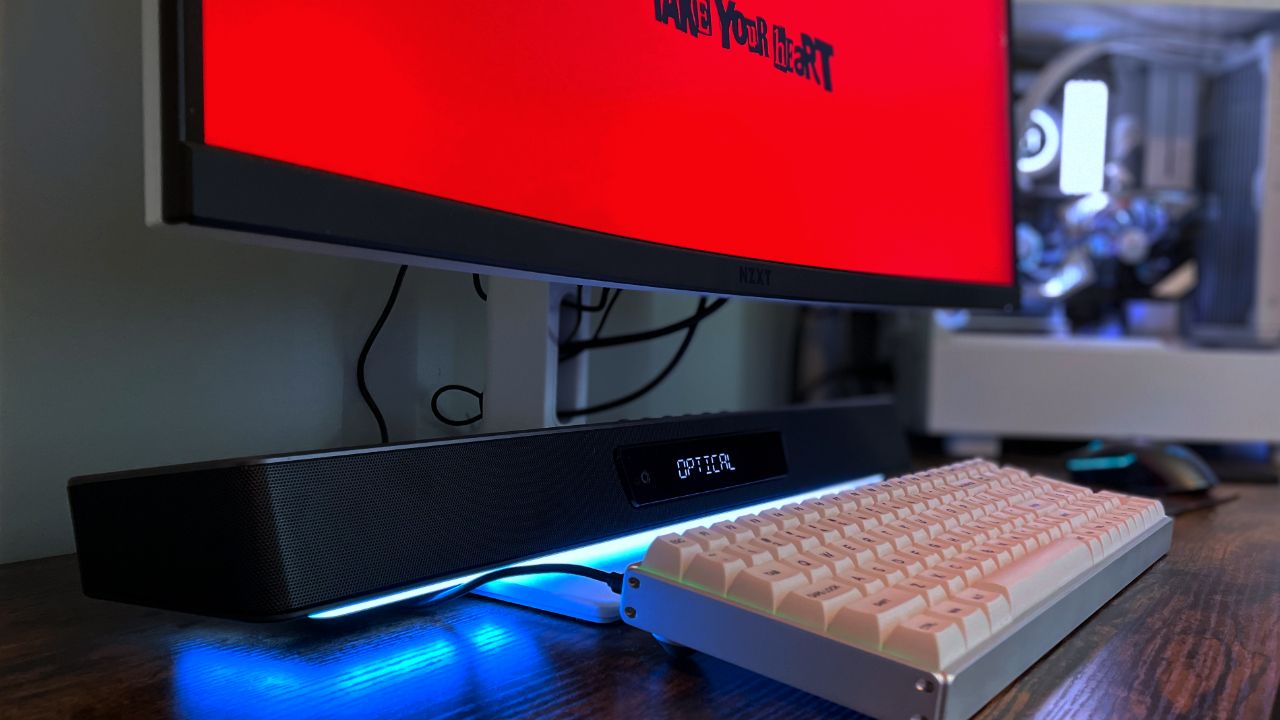 While we typically think of more power being better, the Katana V2X is a prime example of what it looks like to do more with less. With a lower output and overall power draw, the V2X still puts in the work to create a rich audio soundscape to keep you immersed in your entertainment.

Even though the power is lower, the features are not diminished. The onboard presets and Creative’s companion app give the Katana V2X a number of customization options for users to craft their own personal audio experience. It also boasts the same diverse connectivity that allows users to tailor the experience to the one that works for them.

Overall, we were just as impressed with the V2X as we were with the V2. Coming in at $279.99 USD, the Creative Sound Blaster Katana V2X is $50 USD less than its predecessor but still provides a stellar, customizable audio experience. We described V2 as “end-game audio” and it sticks with the V2X. In other words, this could be the last sound system you purchase for a while. 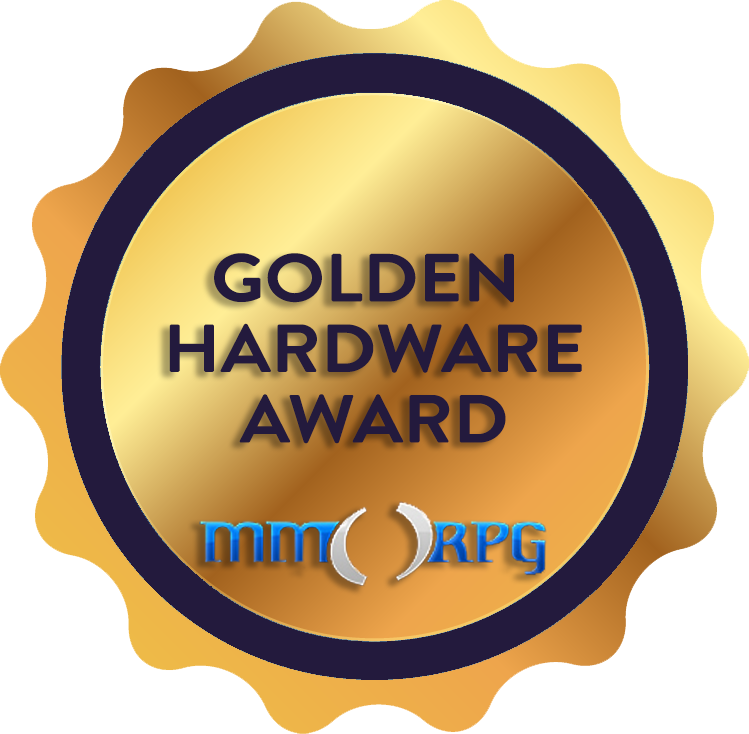 The product discussed in this article was provided by the manufacturer for evaluation purposes. Products purchased through our links may result in a small commission for the site. Authors are not compensated based on affiliate marketing or clicks.