When it comes to PC cooling, I consider myself an air purist. The first and only time an all-in-one cooler found its way into one of my builds was over a decade ago (an i7-950 cooled with a 120mm radiator). Every PC before or after, including both PCs in my house at the moment, has had some sort of air cooler keeping my CPU from overheating. So, when one of Cougar’s big air coolers came up for review, I was chomping at the bit to give it a try. Some wires got crossed, so you can imagine my surprise when the package arrived, and instead of a brand new air cooler, there were not one but two of Cougar’s latest AIO coolers, the Poseidon GT240 and GT360, inside. It was almost as if Cougar challenged me to rethink my stance on PC cooling. Challenge accepted.

The first thing I noticed when pulling the Poseidon out of the box was the sides of the radiator had a rough aluminum look. It’s a lovely, subtle accent that makes the Poseidon stand out from other AIOs. A thin sticker logo also adorns each side. Since the lettering is easily torn (the A has already been turned into a 4), etching the logo into the metal would give a great, longer-lasting look.

The Poseidon comes with either a 240mm or 360mm radiator accompanied by a set of all-black non-RGB fans. The included hardware provides a lot of flexibility in mounting the radiator and fans in your case. A set of short screws allows the radiator to be installed flush with the case, with a longer set to attach the fans. 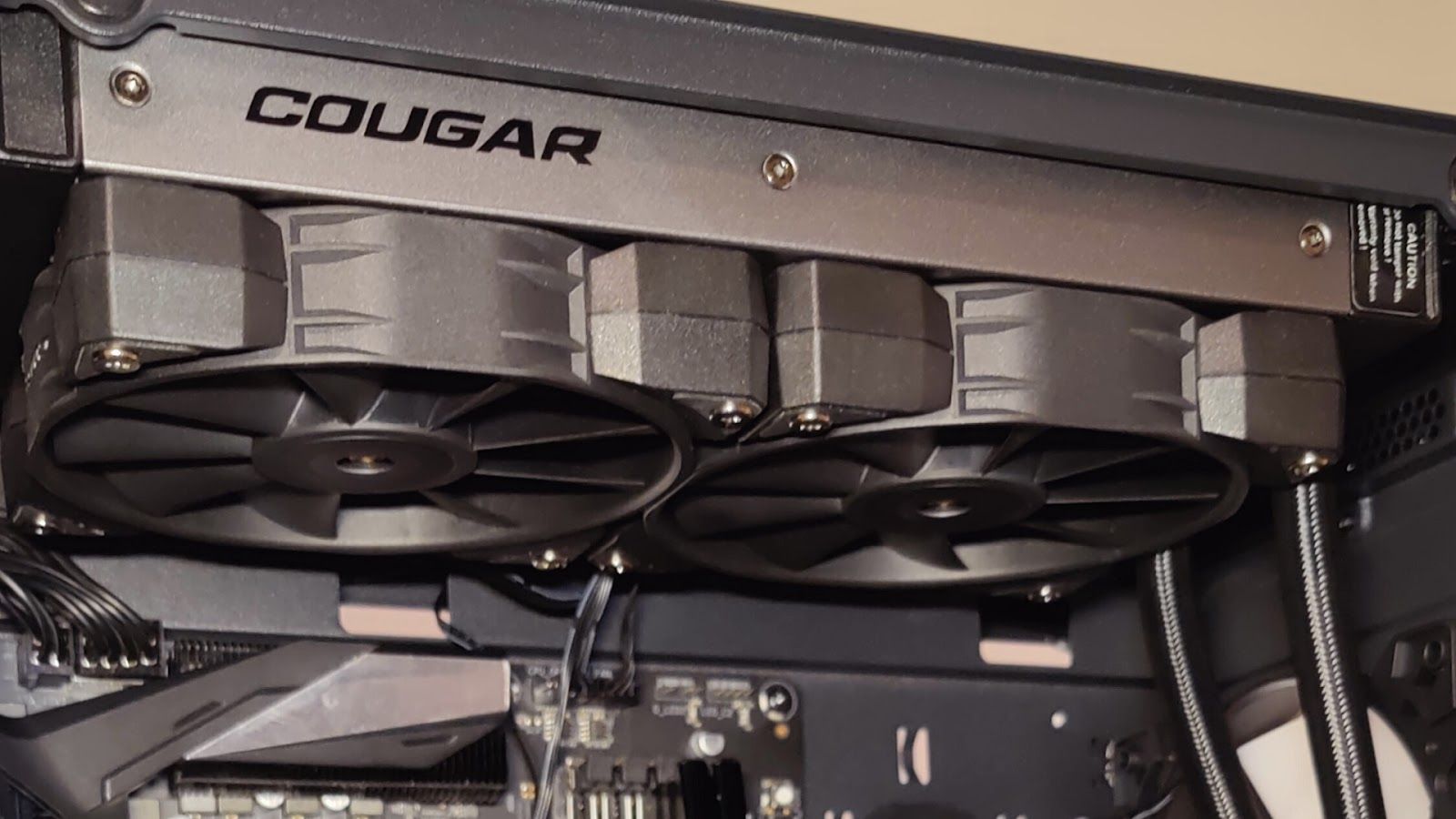 Unlike other Cougar AIO coolers that use a square water block, the Poseidon uses a round block and pump. Along with a single ARGB ring encircling the block, the face has an ARGB Cougar logo centered on an infinity mirror, creating a fantastic lighting effect. The pump head also rotates to keep the logo perfectly aligned no matter what direction you orient the water lines.

The cooler includes all the necessary brackets, standoffs, and screws needed to install all modern Intel and AMD CPUs. Each set of hardware is clearly labeled for easy identification, and the installation guide has easy-to-follow directions for each CPU. Regardless of the CPU, the installation process is the same. Once the standoffs and mounting bracket are in place, the water block is inserted and rotated clockwise into the bracket, then tightened down to hold it in place against the CPU. 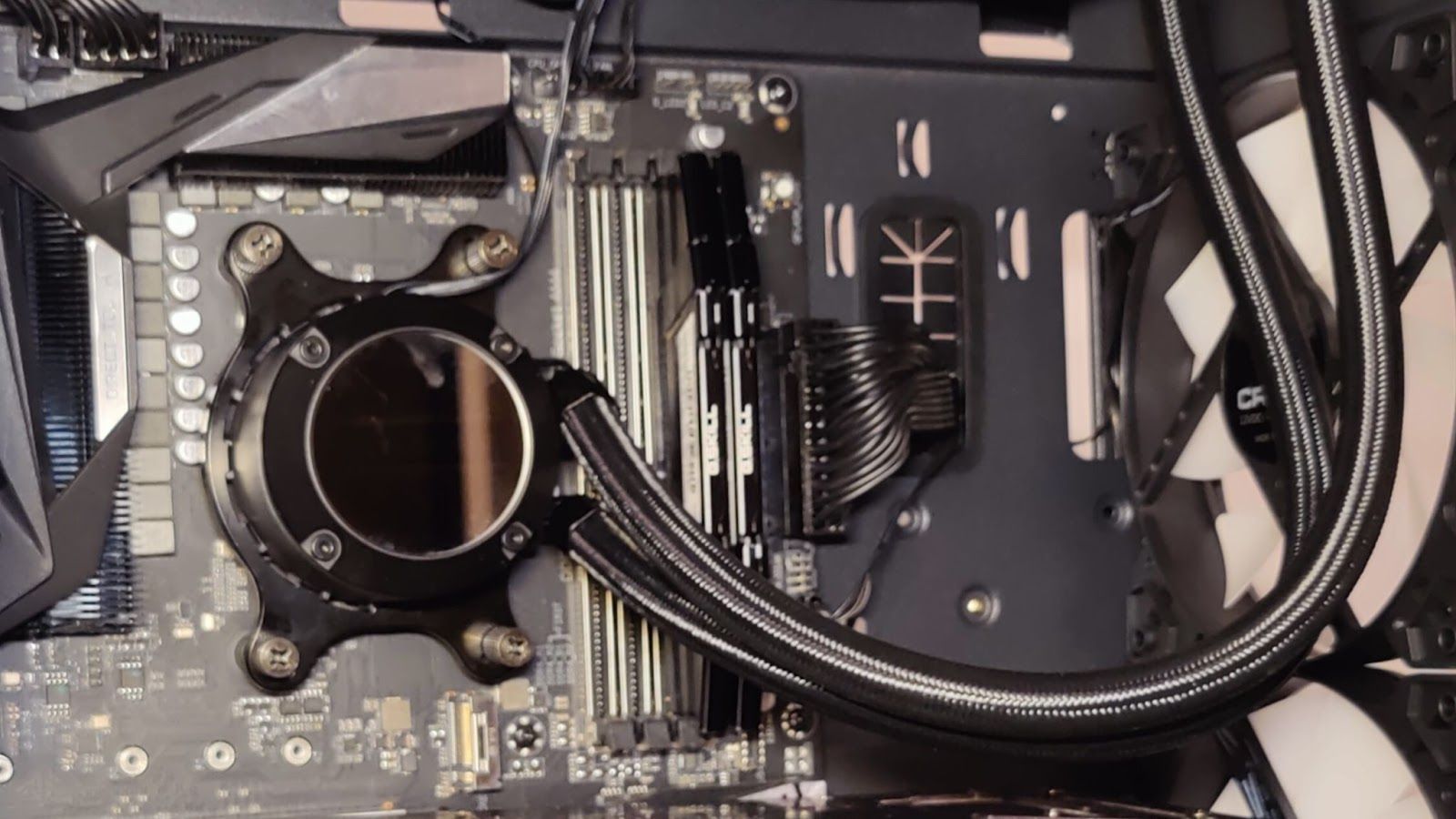 There is a potential hidden cost to using an AIO cooler - noise. One of the reasons I use a Noctua air cooler is how quiet the 140mm fan runs. Even at its maximum speed (1500rpm), the Noctua fan doesn’t break the noise threshold created by the case and GPU fans. With two 120mm fans and a pump generating noise, I absolutely expected that the Poseidon would make an eardrum-shattering difference compared to my Noctua cooler.

At maximum speed, the pump does emit a slight hum, but nowhere near what I expected. When turned on for the first time, the loud noise of air bubbles working their way through the system could be heard. However, once the air bubbles cleared out, I had to practically hold the pump next to my ear to hear the hum from the pump doing its thing. After the pump was installed and the whole system was up and running, the pump was inaudible and added nothing to the sound profile.

I was also pleasantly surprised by the two Cougar fans. At 100% speed (1940rpm, slightly lower than the rated 2000rpm), there was only a 7dB increase over the system with the Noctua cooler installed. That isn’t an insignificant change, but it’s still less than running the fans on my graphics card at 100%, and it isn’t enough to bleed into the sound output of my headphones. At 75% speed, the sound dropped to just 2-3dB higher than the Noctua cooler, depending on whether the radiator is front or top-mounted. 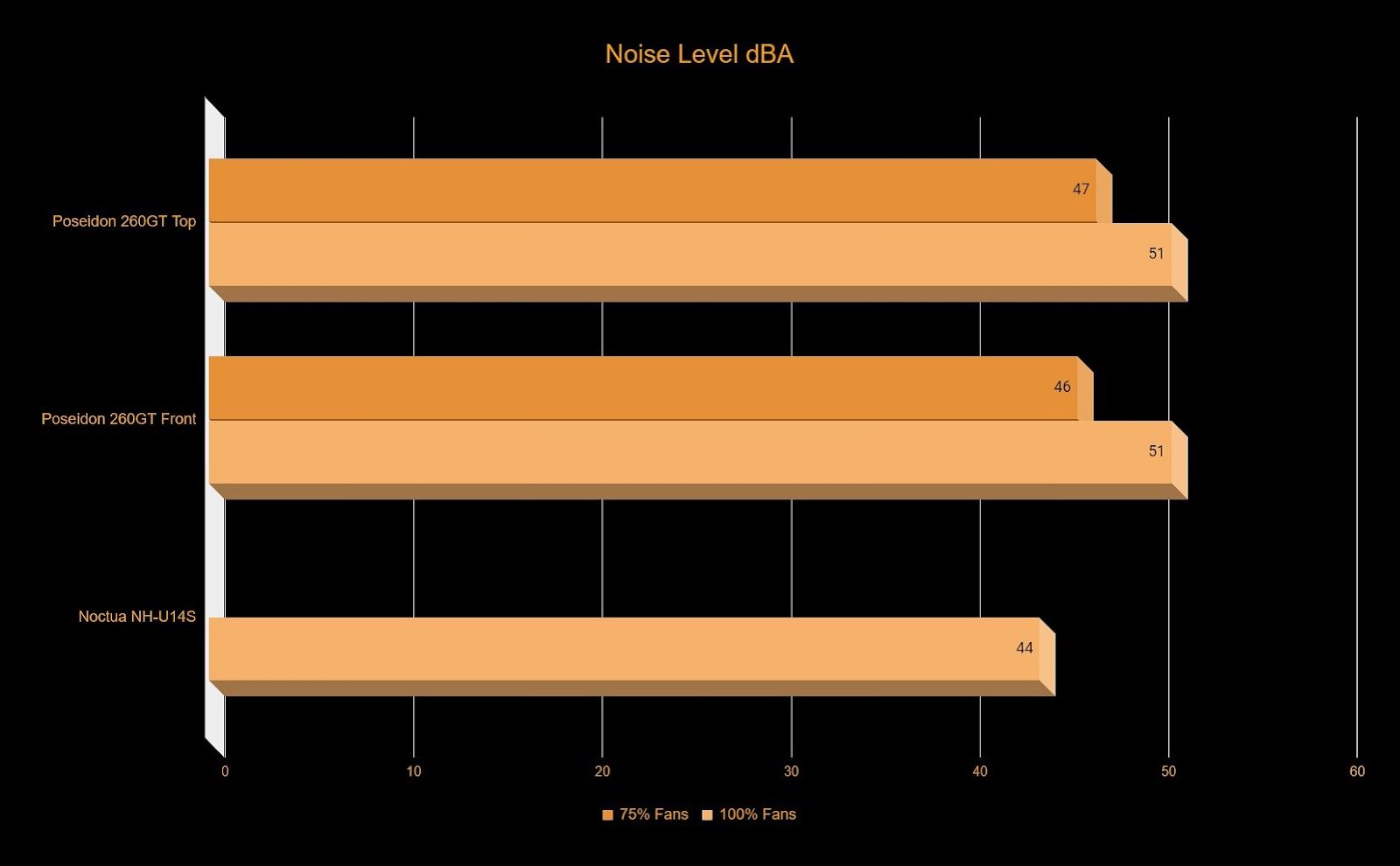 With my concern about noise appeased, the next thing to consider in the battle of air versus water cooling was thermal performance. Everything started off as expected, with the Poseidon keeping the CPU a couple of degrees cooler at idle. Beyond that point, my Noctua cooler didn’t stand up against the Poseidon as well as I thought it would

I knew that an AIO cooler would perform better than an air cooler under load, but I wasn’t prepared for how the Poseidon dominated my Noctua cooler in a Cinebench stress test. I expected the Poseidon to test a couple of degrees lower, not 8 to 9 degrees, depending on fan speed and radiator placement. 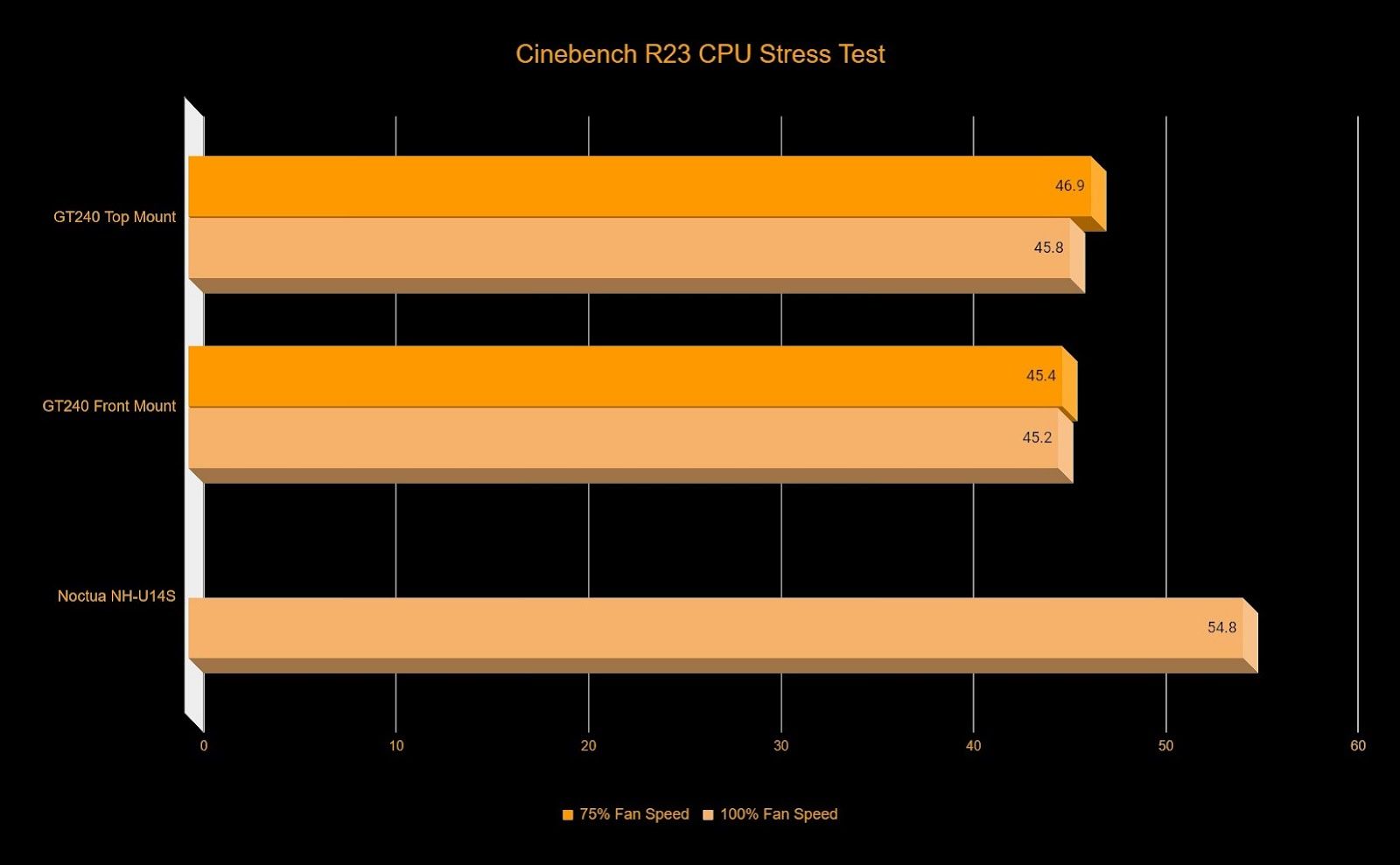 I was so surprised by the difference I thought I must have done something wrong. After retesting both coolers, the results stood. I still wasn’t ready to give up on my Noctua cooler, so I rebuilt and tested my system in two other cases, an NZXT H510 Flow (front-mounted) and a Fractal Designs Meshify C (top-mounted). The Poseidon tested within tenths of a degree in the other cases, and the Noctua did marginally better (probably due to different case fans). Still, the results were close enough to my original tests to declare the Poseidon an all-around winner.

I also hoped to test the GT360 but ran into installation issues. The specs on the Meshify C case show that it can hold a front-mounted 360mm radiator. Indeed, the case is tall enough to fit the radiator, but the radiator and fans wouldn’t fit in front of my graphics card. This is something to consider if you want to go with a front-mounted cooler.

Even without testing the GT360, it is easy to predict the benefits it would provide over the GT240. Overall temperatures wouldn’t change much - maybe a degree or two - but other thermal properties would be affected. The larger radiator would slightly increase the time before the coolant was saturated. It would also expedite heat dissipation, resulting in a quicker return to base temperatures. Adding a third fan would also allow you to run the system at lower RPMs for an even lower acoustic footprint.

It’s hard to argue that the Poseidon 240GT is a worthwhile upgrade over my Noctua cooler. With the fans at full speed, the Poseidon produced much better thermals than my air-cooled system, and even after dropping the fan speed to minimize the noise increase, the Poseidon barely saw a dip in performance.

Visually, if you like the look of a big air tower cooler in your case, it’s going to be tough to make the switch to a new look. That said, the Poseidon’s non-painted sides still give a touch of that raw metal look inside your case, and all the extra open space allows the rest of your components to stand out. While the lack of RGB fans could be a negative for those looking for maximum glow inside their case, the combination of the infinity mirror and light ring on the pump head is a stylish improvement over the basic RGB lighting found on many AIOs. 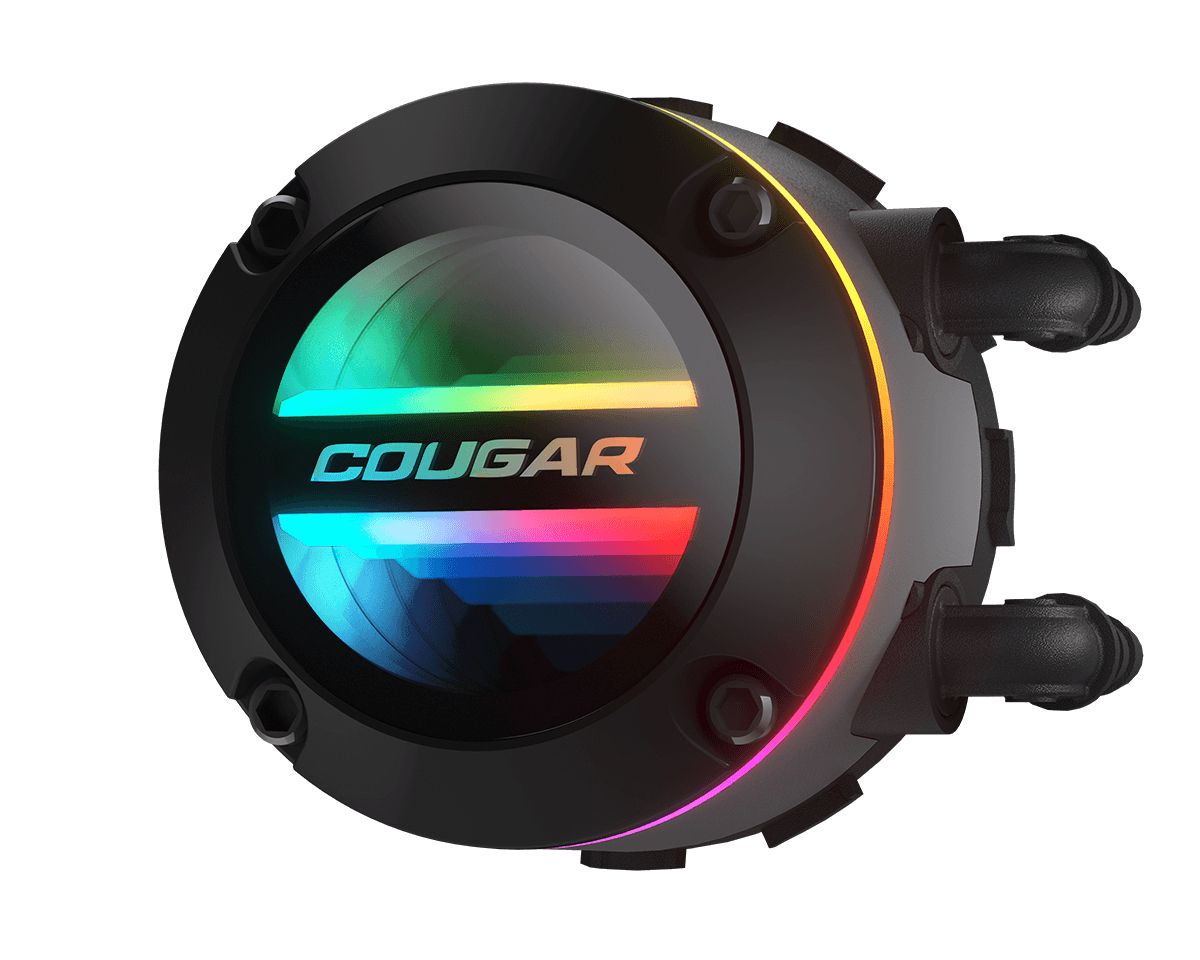 At $99, the GT240 adds a hefty premium over all but the most expensive air coolers. The Cinebench test provides a worst-case scenario for thermals, and the Noctua air cooler still didn’t come close to reaching critical temperatures. This begs the question of whether the Poseidon lineup is worth the price. It should also be mentioned that the GT240 costs more than many comparable AIOs on the market, many of which come with RGB fans.

Whether or not the GT360 is worth its $150 price tag is a little easier to decipher. If you use an older, lower-wattage CPU like the AMD 3700X in our test system, then the GT360 is total overkill. Pairing it with a newer, hotter CPU makes much more sense, and in the 360mm AIO class, $119 is an attractive price.