When we heard that Corsair was releasing a new iCUE-enabled PC case, we knew we were in for something special. What we did not count on was that they would actually be releasing a new case series with multiple iterations. We got our hands on the Corsair iCUE 4000X for review. This elite case offers sharp form and smart function at a reasonable price with options, but is it a case worth considering for your next build?

Let’s find out together.

The Corsair iCUE 4000-series is made up of three PC cases with slightly different front panels. The standard iCUE 4000D has a flat panel in the front for the minimalist, whereas the iCUE 4000D AIRFLOW uses the same triangular design on the front panel as found on the top of each case for, as the name suggests, extra airflow. The third case in the series is the one we are reviewing today, the 4000X: an iCUE 4000-series case with a tempered glass front. Each case iteration is available in black or white.

Colors and design are not where the iCUE 4000-series stops, each comes equipped Corsair’s Lightning Node Core. The Lightning Node Core at the heart of each case is what enables, as the name suggests, iCUE control. Corsair’s iCUE software allows users to control fan speeds, RGB colors, and to create user profiles for different software applications. For example, let’s say that you are a Streamer and your PC is in your shot. iCUE will allow you to change the color scheme you want - whether it’s colors matching your channel’s brand or flashy rainbows to get the hype-train out of the station!

To help you get started with that, each iCUE 4000-series case comes equipped with three 120mm Corsair SP RGB Elite fans. These fans have black mountings with translucent white blades to all the iCUE programmable RGB to shine through. Out of the box, the fans come installed in the front of the case. In this orientation, they provide steady air intake.

Speaking of air intake, in case you are worried about the intrusion of dust into your system, Corsair has thought of that. These cases have three air filters that are easily removable for cleaning. Located under the PSU as well as at the top and front of the case, each filter is intelligently positioned and designed for the needs of its placement. For example, while the top filter is magnetically mounted to the outside of the case, the front filter clips into the case underneath the tempered glass of the 4000X, but in front of the fan mounts.

The iCUE 4000-series has a few mounting options for you if you are looking at water cooling. For front mounting, the 4000-series supports up to a 360mm radiator with fans. However, if you want to keep things smaller at 240mm, Corsair does sell a small plate to cover up the opening in the PSU shroud. If you would rather mount your radiator vertically, you can fit up to a 280mm radiator (with fans) in the top position. However, Corsair does recommend that you stick to 240mm for clearance’s sake if you’re using any of their RAM offerings.

Moving on to the back panel, the cavity is fairly open and several routing options for your cabling needs. Standing out is a cable channel. This channel affords enough space to run many of your main system cables and comes equipped with velcro straps to ensure your cabling stays nice, neat, and secure. Corsair does include three extra straps as well as some zip ties in case you need a little bit of extra help with cable management.

From the back, you have access to install a PSU and hard drive mounting options. The Corsair iCUE 4000-series cases have removable housing for two 3.5 inch drives within the PSU shroud as well as two 2.5 inch drive mounts that can either stay in the vertical position within that space or be move to mount on top of the PSU shroud, on display with rest of your components.

Building in the Corsair iCUE 4000X

At first glance, I was prepared for the 4000X to be a chunky case. As it turns out, I was wrong in my estimation. While slightly wider than NZXT’s H510 Elite, the Corsair iCUE 4000X keeps the mid-tower footprint while offering a nice amount of building space within the main compartment.

The workflow of building within the case feels pretty intuitive. The side panels are mounted to the chassis via thumb screws with the design creating a slight hinge without being physically connected to each other. The tempered glass panels do have an extra measure of security with tabs that snap them into place.

The 4000X can fit motherboards as small as ITX motherboards, but can go all the way up to an E-ATX, in case your motherboard has that extra girth! Out of the box, the 4000X has standoffs in place for a standard ATX motherboard. This was perfect for me since I am using the ASUS Prime-Pro X570 for this build.

Because this chamber can fit up to an E-ATX motherboard, it meant there was slightly more space to work within. Considering that I don’t have dainty hands, this made building within the space far more convenient! One standout example of where this made a world of difference (in my favor, of course) was having to reroute cables! Being afforded just a little bit more room was the difference between being able to actually reach to ports on my motherboard versus having to remove and reinstall my AiO cooler. In this situation, the iCUE 4000X gets a huge win in my book!

Cable management within the iCUE 4000X was made incredibly simple because of three things: the existence of a wide cable channel, multiple tie-down points, and the placement of the Lightning Node Core. The placement of each helped streamline where I routed cables and, ultimately, how clean my build turned out in the end.

The rear I/O is slightly recessed, showcasing my motherboard’s I/O shroud without it being obscured by my rear fan. This is a bit of a double-edged sword. On the positive side, this recess provides around half an inch worth of space for peripheral cables to be tucked away. On a less positive side, if you are in the habit of moving your PC case or needing to access the rear I/O, the recess makes getting to your plugs a bit more challenging. This is more of a user preference than a design flaw, but it is worth mentioning.

Since this recess exists, it means that the PCI slots are also recessed. Depending on how you are using the PCI slots, the thumbscrews can be a bit difficult to use as intended while trying to mount a GPU - especially when mounting a larger one! There are seven horizontal mount slots as well as two vertical slots, in case you are looking to vertically mount your GPU. The mount is sold separately.

Corsair has a history of delivering some stunning PC cases and the iCUE 4000-series in no exception. Borrowing from many years of experience, the Corsair iCUE 4000X is well suited for mid-tower showpiece PC builds. What branding there is on the case is tastefully minimal, making your build the focal point.

While the interior is spacious enough to fit up to an E-ATX motherboard while still providing mountings for smaller boards, ATX does feel like the sweet spot the iCUE 4000-series. Even with the extra space, cable channels (and the cables routed to them) are obscured from view by cleverly placed shrouds and tempered glass matting.

The case has a few minor issues which, while potentially preferential, hold this case back from being perfect. The cabling for the front panel power switches and LED could stand to have a more modern update by tying them into a single, larger connector instead of tiny, individual pins. Thumbscrews for PCI-mounted cards look cool, but they can be functionally difficult when swapping hardware. Finally, with the tempered glass side panel, a more secure connection to the front of the case (such as hinges) would make removing this panel feel far less risky.

The iCUE 4000-series comes equipped with the iCUE Lightning Node Core smart control module, but it does have one fatal flaw. The module only seems to recognize fans within one product family. This is great news if you have other SP RGB Elite fans. This is sad news if, like me, you don’t. I am now left with a decision to either buy more LL120 fans or install another module. Bummer. 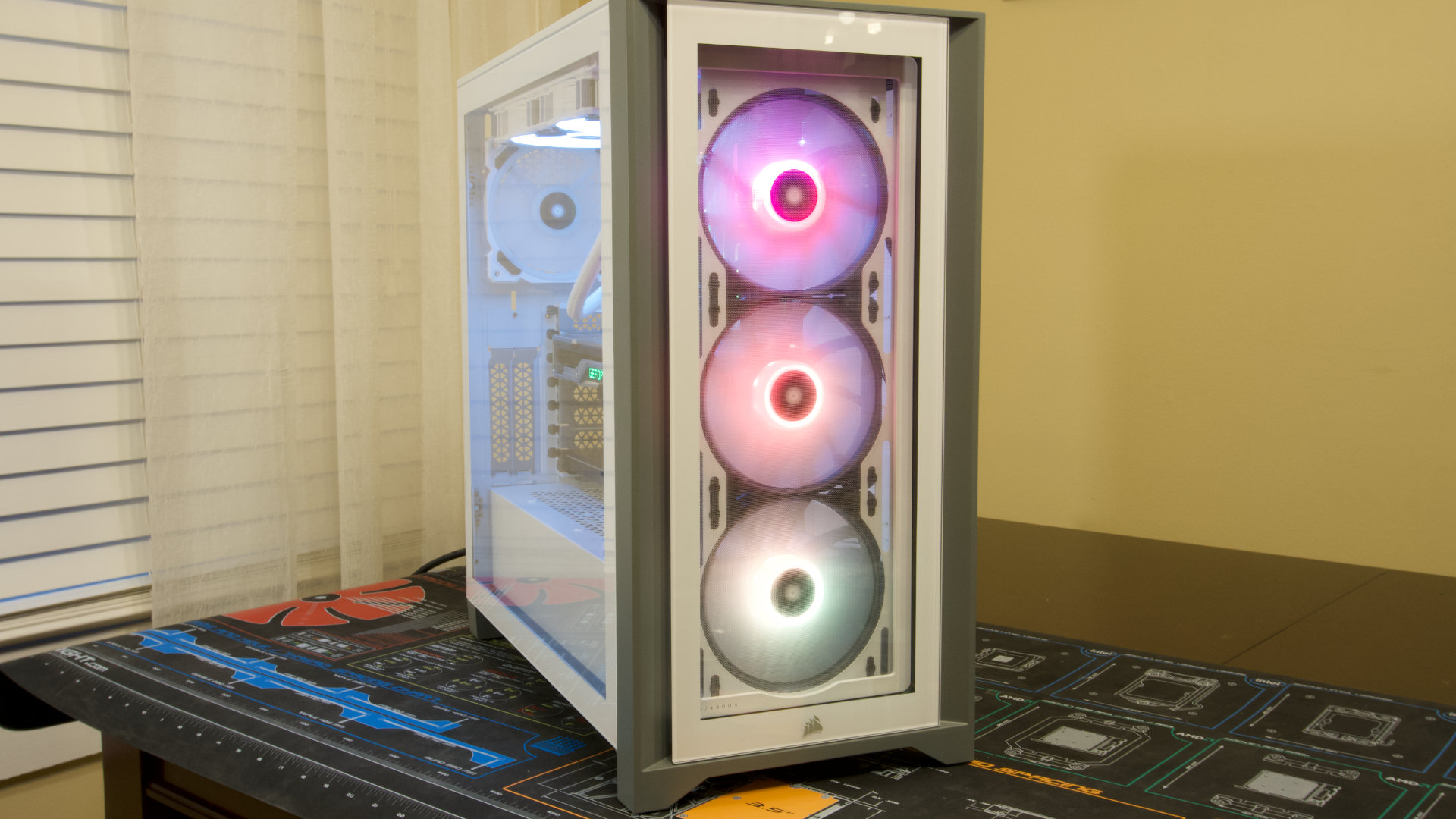 Even with all of that considered, the iCUE 4000X is a gorgeous mid tower PC case that provides plenty of space for your custom PC build. Whether you are mounting a beefy 360mm radiator or squeezing in every last fan you can find a mount for, you are free to do so without your build feeling cramped. Let’s hope that holds true when the RTX 3090 releases!

Starting at $79.99 the Corsair iCUE 4000-series are well built, have a sharp case design, and come equipped for the iCUE ecosystem. The tempered glass variant, the 4000X, coming in at $119.99, is a beautiful example of Corsair taking something that is already good and kicking it up a couple more notches.

The product discussed in this article was provided by the manufacturer for the purposes of review.
8.5Great
Pros
Cons
Tags
PC Building
Corsair
DIY PC
PC Cases