Corsair is known for making high-quality PC hardware and accessories. From their RAM, CPU coolers to their audio solutions, Corsair seemingly does it all – and does it all well. Enter their latest in their award-winning HS line of headsets, the HS80 RGB Wireless headset. Does this headset do enough to help it stand out from the pack?

At first glance, the HS80 looks sleek. I really appreciate the muted color scheme, the gunmetal grey aluminum accents from the headband all the way down to the ear cups themselves make the headset evoke a modern aesthetic I appreciate. Normally with my gaming hardware I want the over the top, RGB design, but for headsets I want something I wouldn’t be embarrassed wearing to the gym if I could. The HS80 definitely fits that bill.

The build quality itself feels sturdy – there isn’t anything giving me the cheap, plasticy feel of other gaming headsets out there. I also enjoy the fact that there seemingly isn’t any moving plastic parts to adjust the headset, instead it’s all handled by the bungee-esque headband that sits snugly at the top of my head. As a result, the headset fits absolutely perfectly on my ears, and the fact it feels so lightweight means I was able to wear it for hours during work and gaming sessions without experiencing any real fatigue, unlike other headsets like the LS40s by LucidSound or even one of my favorite pairs of cans, the Victrix Pro AF.

The lighting on the headset, which is part of the draw of a branded RGB headset, is actually pretty muted. A single Corsair logo on each ear cup is present, and the color with which the logo illuminates is customizable through Corsair’s iCue software. The ear cups themselves are comfortable, being made with a cloth versus a leather or faux-leather material. While I personally prefer the latter, I didn’t get the usual sweating or scratchiness from the cloth material on the ear cups.

The HS80 is equipped with two 50mm neodymium drivers to drive the sound to your eardrums, and the two cans can pump out some great quality sound. As a wireless headset, naturally you’ll want to use the HS80 without being tethered to your PC, but the sound quality, which Corsair mentions in their marketing, is better when wired. This is because through the USB connection, the headset is capable of higher fidelity 24-bit/96kHz sound output.

This isn’t to say that the sound when wireless is bad – far from it. The lows of Mozart’s Requiem shine through, especially during its Lacrimosa, and everything felt perfectly balanced when listening to Miles Davis’ Sketches in Spain album. This is also helped thanks to native Dolby Atmos support on PC and Xbox, providing clear, crisp and transformative digital surround sound in your headset.

The HS80 uses Corsair’s Slipstream technology, resulting in low-latency wireless speed, though I was disappointed with the range of the headset itself. Corsair advertises up to 60 feet of range, but I’m not sure I walked more than 20 feet away before I started to get the sound cutting off and falling away altogether. Obviously factors like walls and such play a role here, but I’ve had other headsets with outrageously good range, so I can't help but feel this was strangely too short of a window before the audio fell off.

Like all gaming headsets, the HS80 has a built in microphone aimed at giving you the ability to clearly communicate with teammates during a firefight, raid or your next Zoom call for work. The microphone itself is advertised as “broadcast quality” and it’s easily muted and unmuted by simply flipping the mic itself up or down on the headset. This is also indicated by an LED at the end of the light, so you can see at a glance whether it’s active or not.

The microphone itself is alright – it’s not going to rival the clarity of a good condenser USB mic, and if you’ve got an XLR set up you’re not going to be replacing that with this, but as far as headset mics go it’s not that bad. In the audio sample below, my voice is quite clear, and the mic itself doesn’t seem to peak anywhere, instead it maintains a clear, even signal throughout. The lows do seem a little lost here – you’re not going to emulate that “radio voice” many look for in a studio mic, but it definitely is serviceable. There is also a slight fuzz, but that is due to the fan in my house behind me, though do note that the microphone, thanks to its omni-directional array, could pick up noise around you versus a more targeted polar pattern like a cardioid pattern.

The Corsair HS80 RGB Wireless Headset is a great addition to the Corsair roster of headsets. It’s build quality feels exceptional, and the lightweight construction means I can wear this for long sessions without the normal fatigue that can come with gaming headsets. It’s easy to adjust – simply plop it on your head and continue on living your life – which is a design feature I want every headset moving forward to adopt as well.

While it’s a shame to get the best audio quality the headset can deliver you’ll need to keep the wireless headset wired, the audio quality when using the dongle isn’t necessarily bad either. Far from it. The Slipstream technology powering the wireless signal also meant that every single action in a game was heard as it happened on screen – there wasn’t an inkling of delay between the two, something I’ve experienced with other wireless headsets.

Where I feel the HS80 excels, though, is its integration of Dolby Atmos spatial sound, provided you have access to the feature on your PC or Xbox. If you do, the treatment Dolby’s mixing gets from the 50mm drivers can open up aspects of music and the soundscape of a game in a way not experienced before. Game like Madden 22 came alive in my headset, the crowd noise feeling as though it fully enveloped me while I drove my team downfield. Games like The Lord of the Rings Online felt more immersive as I traveled through Southern Gondor, the sounds and music popping in my headset that made the experience feel like new again. Dolby Atmos adds a ton to each experience, and for the HS80 to support it so well out of the box is a crucial feature I’m not sure I can go back from. 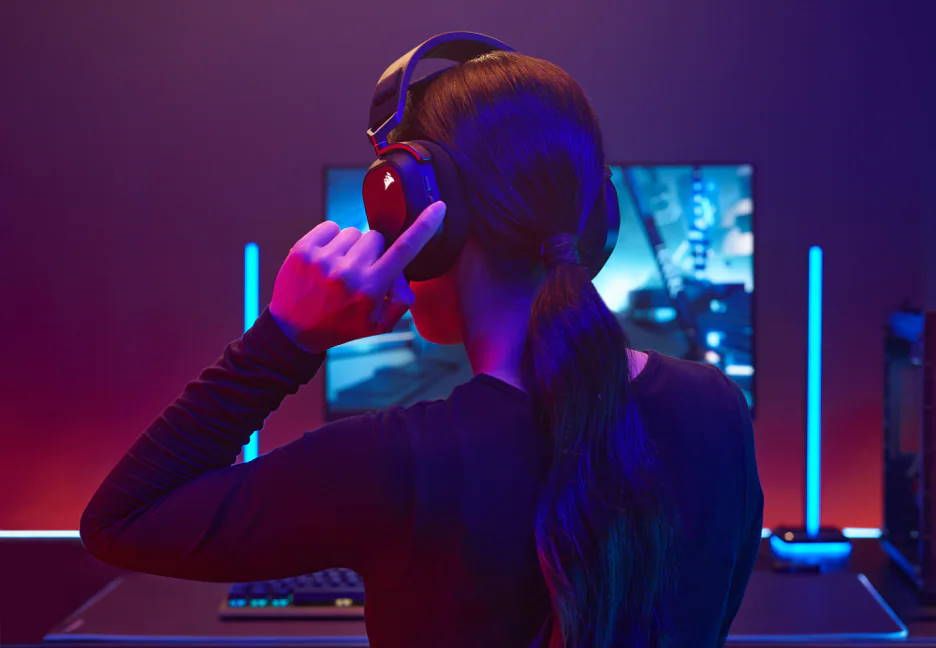 It has it’s faults – I would prefer leatherette earcups versus the cloth ones personally – or at least give me the option to swap them out at a later date. The microphone, while serviceable, never felt like it was positioned in the best spot it could be, even though it’s somewhat flexible and can bend inwards towards my mouth. Also, for an RGB advertised headset, I would have liked a bit more RGB accents. The Corsair logo itself is nice, and the iCue software has come an extremely long way since I first installed it to control the LEDs on my RAM, I would love to have seen a bit more RGB on an RGB headset is all.

That being said, the most important aspect of a quality headset is the quality of its sound. And the HS80 RGB Wireless headset does not disappoint. Corsair is also pricing this the same as the  company’s HS75 XB Wireless Headset, sitting at $149.99. While you can definitely get cheaper headsets that will provide good quality sound, in this price bracket I feel as though the cost is justified. Compared to headsets like the more expensive Victrix Pro AF or the similarly priced LucidSounds, the HS80, I feel, blow both out of the water for its price.

The HS80 is a great headset that definitely fits the bill for a high-quality, premium gaming headset without completely breaking the bank. The out-of-the-box support for spatial audio technologies like  Dolby Atmos provide a ton of value, and while I wish the range was a bit more consistent, as well as more RGB accents on an RGB-marketed headset, but the function of the HS80 doesn’t disappoint. The HS80 RGB Wireless headset is a great little piece of kit, and definitely should be one to look at if you’re in the market for a new set of cans.

Product discussed in this review was provided by the manufacturer for the purpose of this review.