Getting a good set of headphones with active noise canceling can be an expensive endeavor. Thankfully, CIYCE is looking to shake up the mold by releasing a set of headphones that can provide incredible sound clarity and ANC for less than $100. The question is, though, how well do they work in practice?

The CIYCE Evolution Wireless 3 in 1 headset comes in some sleek packaging, with the headset snuggly set-in high-density foam to keep it from moving around during shipping. The headset itself is sleek, with each ear cup sporting two RGB lights that can be changed depending on your mood with a simple tap, as well as a few on-ear controls. The headset itself is light, meaning that my head never got fatigued during long gameplay sessions.

I really do appreciate the look overall of the CIYCE headset – I specifically love the sides of the ear cups and how they seem to taper down towards the bottom. It’s sleek, and the pure black color of all the materials just adds to the uniform look of the piece. For $78 I was also expecting there to be a lot of molded plastic and materials that just felt cheap, but thankfully I was surprised to see that wasn’t the case here. It’s not as high quality as say an Apple AirPod Max or even something from Audio Technica or Sennheiser, but it’s nothing to scoff at. The metal arms holding the earcups to the headband feel solid enough, and the materials feel high quality, especially the protein leather earcups. 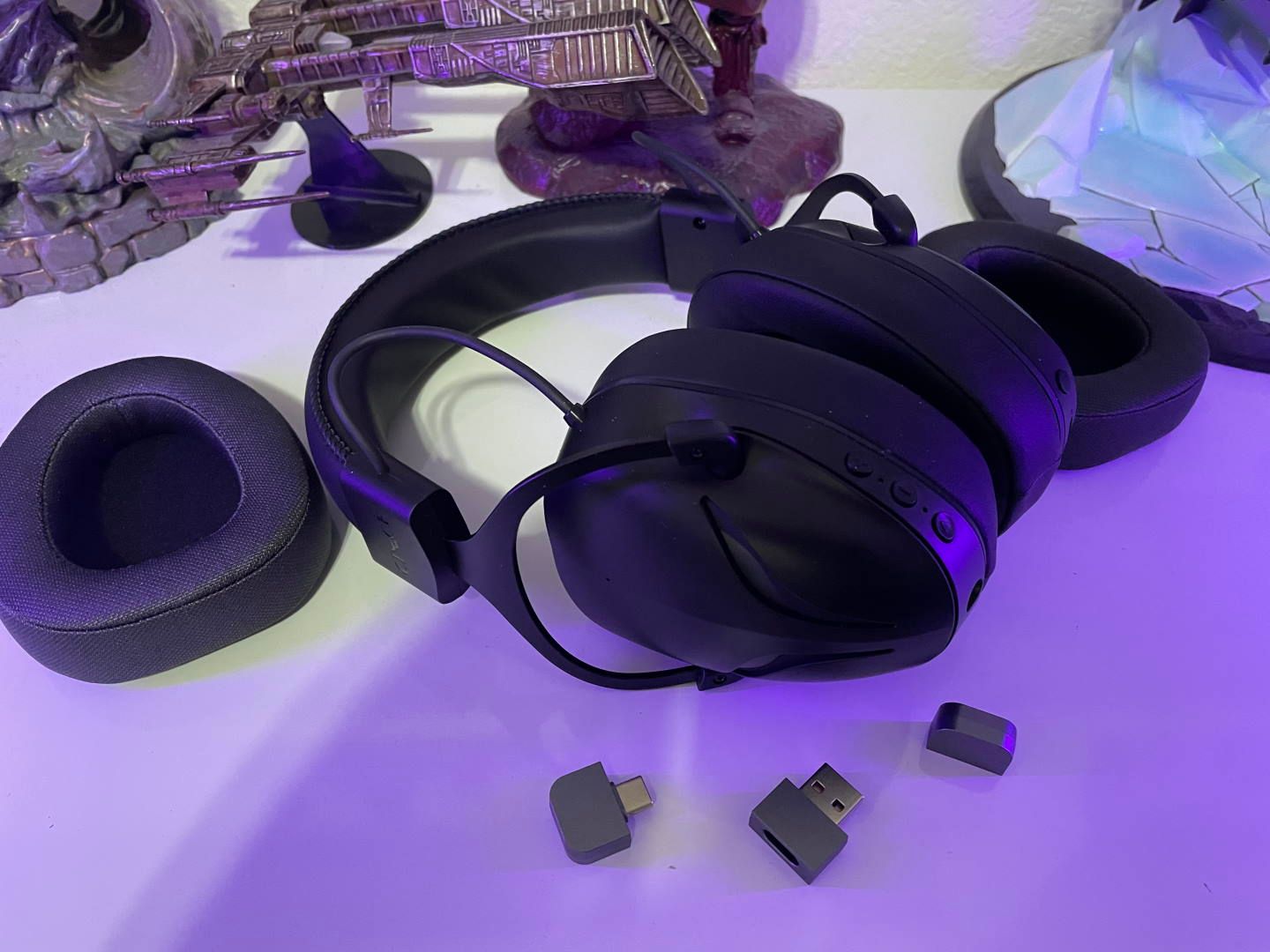 I do have one concern over the build quality, however, and that is the padding on the headband itself. It feels like foam, but it’s not that thick or dense. It does lead me to wonder how that will hold up over time.

The headset itself has a few buttons on the side of each ear cup such as a volume up and down, as well as a button to turn on the headset proper and select Dongle or Bluetooth modes. However, that’s not the only way you’ll control the headset as it also has touch buttons on the side of each earcup, with one controlling the level of the ANC and the other changing the RGB that is on the side. The RGB options are, well, limited. There isn’t any software to adjust this to your liking, so you’re stuck with the preset RGB colors, but it’s a nice touch to have at least.

The ANC is where the CIYCE Evolution is going to make its name. For the low cost you might be led to assume the ANC is there as a gimmick, not necessarily to be taken seriously. However, it’s one of the features that stand out with the headset itself.

The ANC has three modes: a full blockout mode, a passive mode that allows sound to filter in and then, obviously an off mode. Once I figured out how to control the ANC (the included instructions are not clear at all) I toyed around with it and compared it to some of my other ANC headphones to see how well it works. My Apple AirPods Pro are my go-to headphones when on the go, but when I’m at my PC I tend to gravitate towards the Victrix Pro AF ANC when I want to block everything out.

The effect here is more akin to how Apple does ANC. Hidden microphones in the headset will capture the noise and either filter it in if you’re in passive mode or block out background noise if you’re all in on the ANC. It works incredibly well, much better than I initially expected given the price of the headset. Compared to even Victrix’s ANC, which has been my go-to, I prefer the CIYCE here. I do wish I could tweak the volume of the background noise when I’m in passive mode, but it’s nice to have the option to just tune everything out and focus on my game, music or call versus having to contend with everything around me all the time.

But how does it perform overall?

One thing is clear from the CIYCE headset: the team gets audio. The two 50mm drivers pump sound into each ear with incredible clarity, allowing each strum of the guitar in a song like Coheed and Cambria’s In Keeping Secrets of Silent Earth: 3 to shine through. Classical pieces such as Mozart’s Serenade for Winds; K 361: 3rd Movement allow the headset to really stretch its legs. The high oboe rising above the rest of the orchestra sings with clarity while the background instruments are still there, unmuddied. The audio work of the headset is quite an achievement – especially for the price.

Gaming also shines in the CIYCE headset, such as in games like EVE Online. The station sounds when sitting in Jita are balanced perfectly, and while exploring null-sec the ambiance around me never sounded muddled. Valheim also sounded awesome on this headset, with the virtual 7.1 surround sound lending a hand when being attacked in the Black Forest while hunting for copper. Hearing an enemy come up behind me was clear as day, and the music of the meadows sounds incredible while building thanks to the balanced mids, highs and lows on offer.

However, it's not all good news for the CIYCE as I also experienced some incredibly annoying connection issues. The dongle itself never seemed to stay connected after extended periods of gameplay, as after a while it would crackle and sound as though the headset was struggling to find its signal. This was annoying, especially when listening to music while working as well, and it had me searching for my other headsets just to get through the day.

While the ANC works incredibly well, when nothing is playing or I was in a conversation I couldn’t help but notice a soft beep in the background that, over time, started to get annoying as well. I’m not sure what was causing it, or if it is still there when the cans are pumping sound fully, but it was incredibly distracting during Discord interviews this past week.

Additionally, while the inclusion of touch controls is nice on each earcup, in practice it was hard to find the sweet spot where the touch would activate. In-between the two RGB “eyes” of the headset (which I maintain look really cool) seems to be the spot, but when I found myself needing to switch ANC modes I would fumble around, tapping until I found it. It would be nice to have it more clearly defined on the side, or even have the touch capacitor up near the top of the ear cup where there is simply more real estate to tap. As it stands now feels more of a hassle to control it this way.

Additionally, while the headset itself has volume buttons on the left cup, they don’t seem to work on my PC. When trying to turn the headset volume up or down in dongle mode I would start to tap at the buttons only to get frustrated when I remembered I needed to adjust the volume on the PC itself. It seems rather weird to have the volume buttons for it to not work natively in every mode. This is even more confusing when this works on my mobile and iMac just fine.

The headset also includes a built-in mic for calling and voice chat and... well...it’s not good.

The headset mic just doesn’t sound powerful enough to pick up voice properly, leaving the recording to sound as though it was recorded through another phone call with a bad signal. It would really be better if the mic were just left off of this, and here is to hoping CIYCE can fix this with a driver update rather than it simply being a bad mic overall. 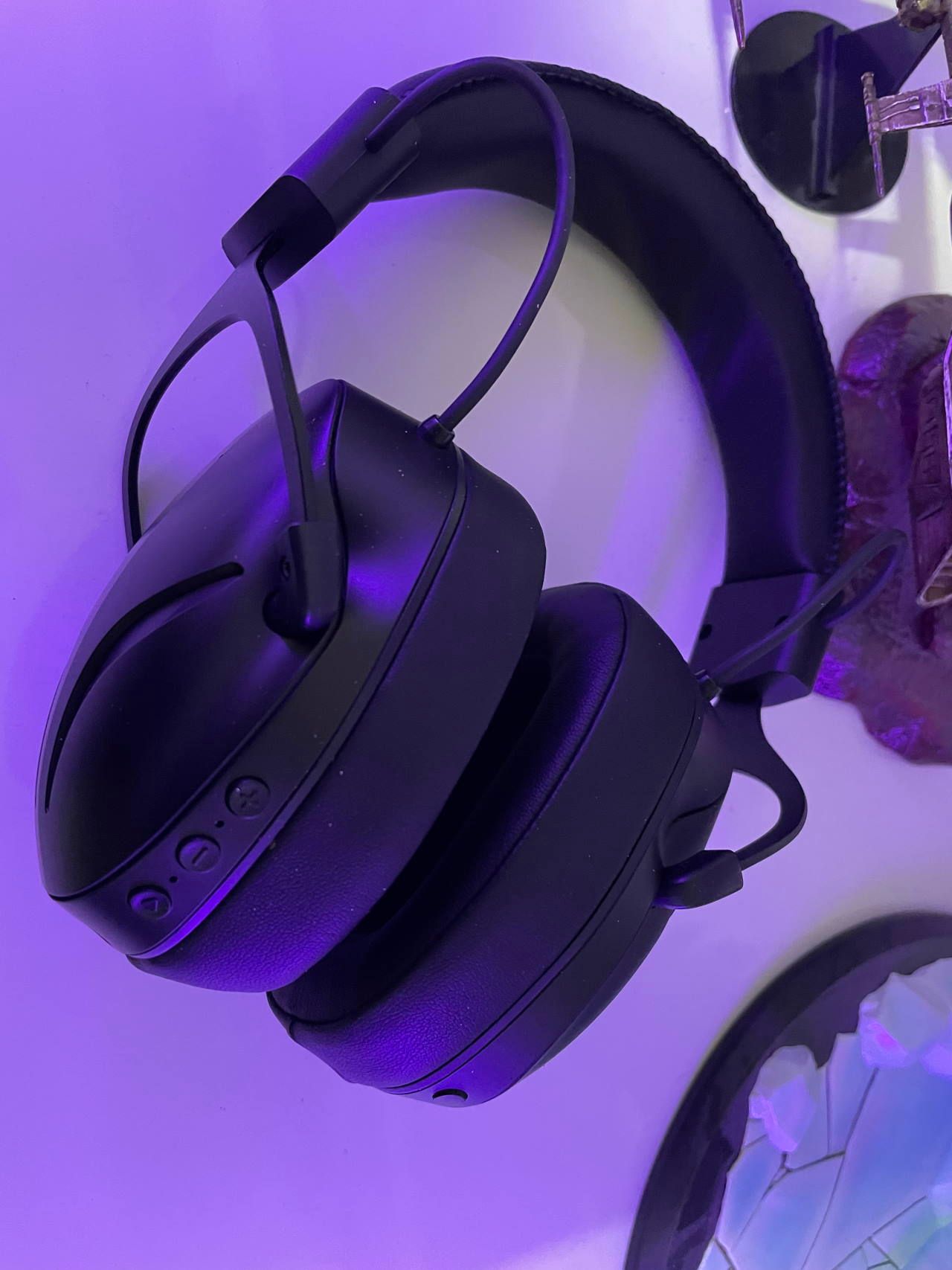 As it stands, for $78 the CIYCE Evolution Wireless headset is an interesting prospect. It provides some great audio quality, and the ANC works as advertised. Built 7.1 surround sound is a nice touch as well, even though it is increasingly standard, even on sub-$100 headsets nowadays.

The CIYCE excels at providing some great audio for the money – something not every headset can claim even as we see prices edge over $100. The fact that the headset is designed to work across myriad devices such as PC, PlayStation, Xbox and even Nintendo Switch means it’s got a lot of versatility to owners.

However, I cannot get around the issues surrounding connection on the dongle itself, as well as the subpar microphone. CIYCE states that these are being worked on and hopefully production models will have them cleared up, but as it stands it made for a frustrating experience with an otherwise excellent product.

The CIYCE Evolution ANC headset has a lot good going for it: great audio quality and the clarity to go with it, high performing ANC modes and it’s outrageously comfortable. However, the issues surrounding its microphone and dongle give me pause. However, it’s definitely worth keeping the Kickstarter on your radar if you’re looking for a quality over-the-ear headset with ANC for under $100.