Welcome back to Budget Keebs, our review column focusing on budget-priced keyboards. Today, we’re looking at something unusual for the focus of this column with the NIZ Keyboard X87EC. At $155, it’s not what I would usually consider a “budget keyboard,” but compared to Topre keyboards it's emulating, it comes in at $75-150 less while offering a very similar experience. If you’ve ever considered shelling out for an electro capacitive keyboard, or are curious why those boards are so expensive and how the X87 manages to be so much less, join us as we take a closer look.

The first thing to know about the X87EC is that it’s not a mechanical keyboard. It’s also not a membrane keyboard like your employer sticks at your desk on the first day of work. Instead, it’s an electro-capacitive keyboard, which is a bit like a cross between the two. Electro-capacitive switches use individual rubber domes and conical springs underneath each key. The PCB then detects the change in capacitance as the key is compressed, triggering a keypress.

All of that is a mouthful, but here’s what you need to know: electro-capacitive switches are very smooth, very soft and quiet, and have a gentle tactile bump. Because of their more advanced electronics, they’re expensive to produce and cost more to buy. As a result, the main brand producing these keyboards was the one who designed them, Topre, and to this day “EC switches” are often referred to as “Topre switches.” Since Topre operated out of Japan, getting one in the United States meant importing it, which limited the pool of potential fans in a dramatic way. Cooler Master attempted to bring the brand to the United States with its NovaTouch line of keyboards, but even it was unable to carve out a sustainable niche. 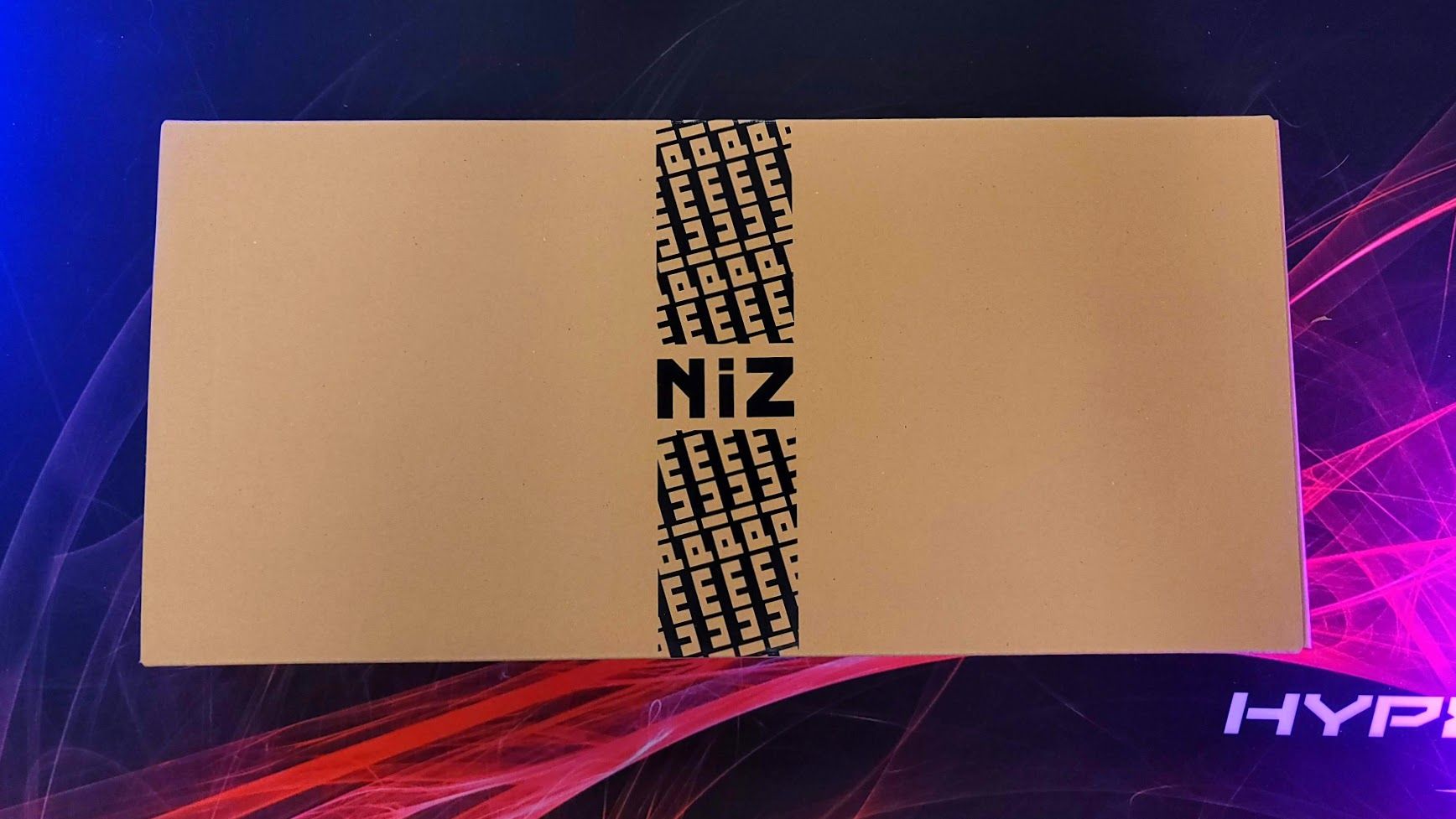 That’s changed in recent years, but genuine Topre keyboards are still ridiculously expensive. Prices range from $219 all the way to $337 at Mechanical Keyboards. The issue is compounded further by how divisive the key switch is. Some enthusiasts claim that Topre switches are some of the most overrated of all time, calling them “glorified rubber domes.” Others insist that they offer the best typing experience you can find today, blending the best part of the mechanical and membrane worlds into something altogether unique. Combine high prices, a lack of exposure, and an ongoing argument that will never be resolved and you have a lot of people unwilling to open their wallets on such an open chance.

NIZ Keyboards is out to change that. 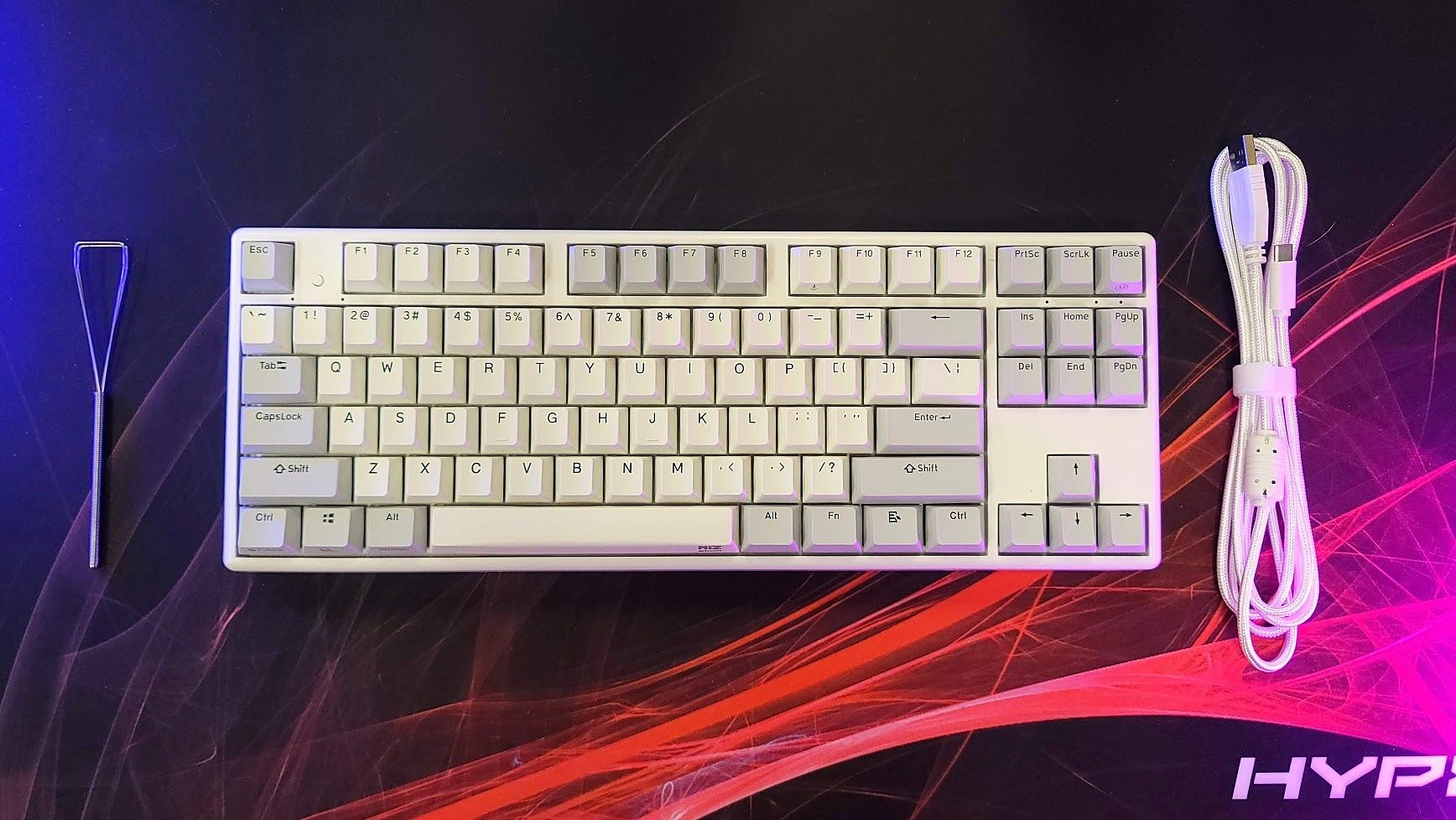 NIZ’s niche is producing electro-capacitive key switches that function and feel like Topres but at a much lower cost. So while a tenkeyless Realforce might cost you $226, the X87EC will only run you $155. Both are still expensive, but in comparison to the “Nike” of the EC world, NIZ Keyboards are definitely Budget Keebs. 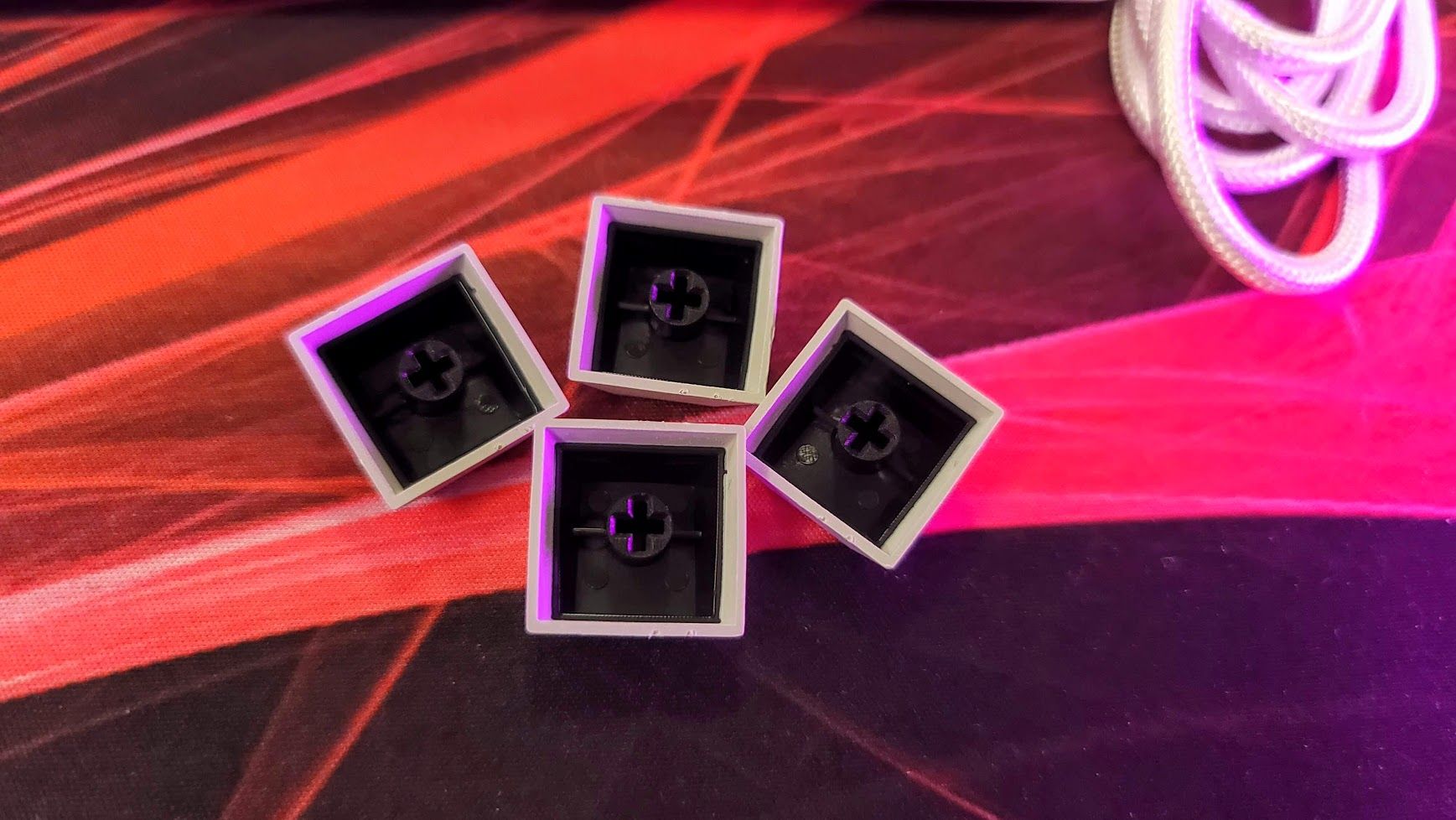 With that said, the X87EC is both very nice and fairly straightforward. It features an all-plastic build but feels solid without any flex or creak. It uses doubleshot PBT caps (the product listing describes these as laser-etched but they’re definitely doubleshots) that have thick walls and slight texturing to feel very nice under the fingers. Each keypress is slightly damped and feels soft without feeling mushy. It doesn’t offer onboard programming but has software available for remapping and macros, making it good for gaming when you need multiple profiles. It also has incredibly light switches at only 35 grams each with a set of 10-gram switches (and a replacement stabilizer) included in the box for added weight if needed. 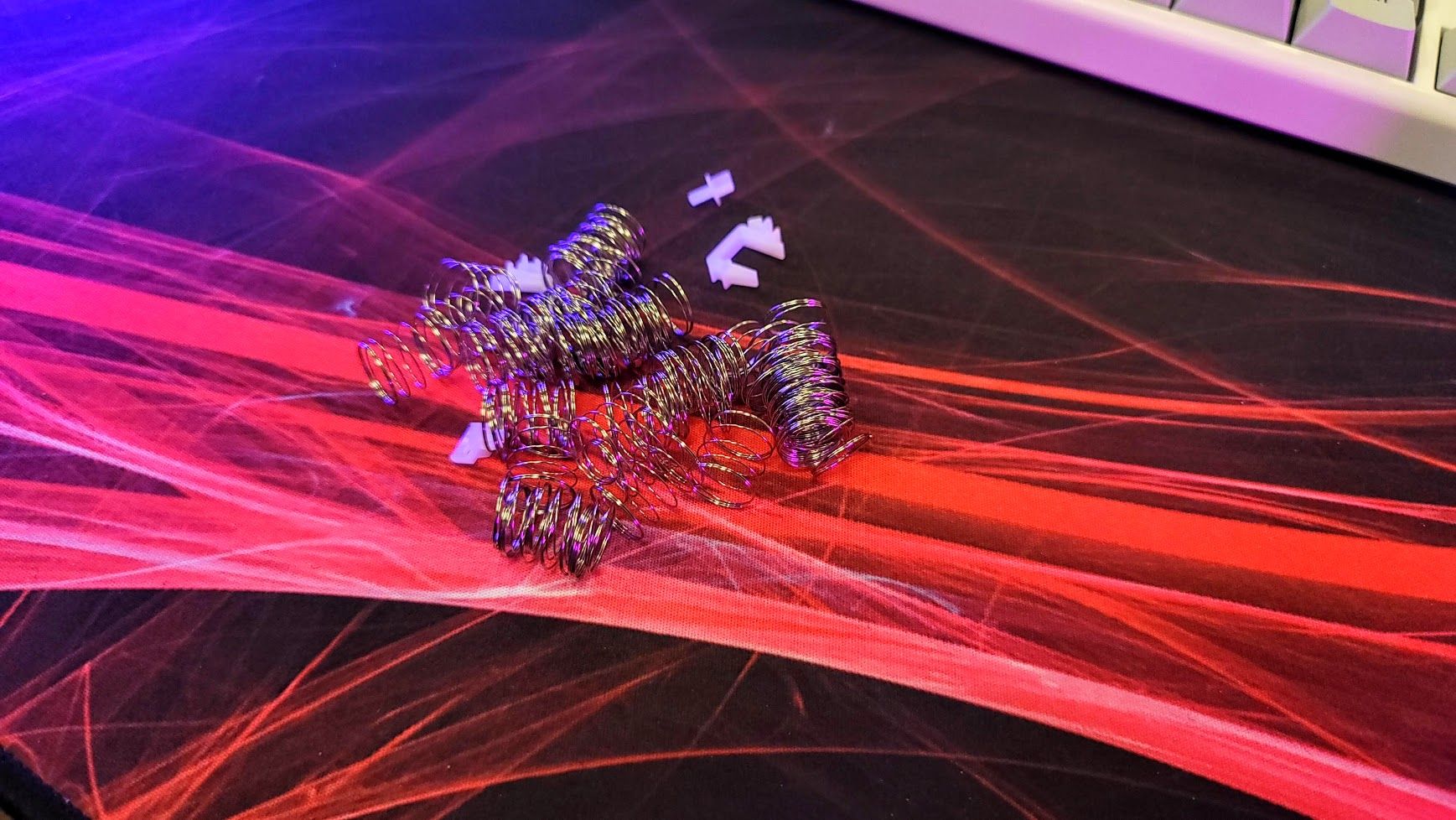 At first, 35-gram switches seems incredibly light. Cherry MX Silver/Speed switches require 45 grams of actuation force and I personally find them far too light for any kind of gaming or typing — typo city. Here, the tactility of the switches completely solves that problem. Instead, they feel feather-light but tactile enough to prevent misclicks. I tried and removed the 10-gram springs. There’s no need.

The other neat quality is that you can adjust the actuation point on the fly. There are three levels — low, medium, and high — indicated by flashes of the indicator lights. If you do find the keys too sensitive, stepping up to medium or high pushes the actuation point up and completely solves the problem. In the software, the actuation steps can even be tailored in 0.1mm increments, though I didn’t find it necessary.

Programming the keyboard is easy enough in the software. You can remap keys, set shortcuts, and map macros but you shouldn’t expect anywhere near the level of polish of a big-budget board. The software here is functional but utilitarian. Even though the X87EC is budget by comparison, I would have liked to have seen some of this programming being done on board, too.  There aren't even secondary media keys to my knowledge -- though a dearth of English-language documentation made finding that a chore.

Returning back to the board itself, this is a slate of keys that’s all about typing. There’s no RGB, no Bluetooth (though a more expensive version offers this), and no other added features. Instead, it’s about the sweet feeling of those EC switches under your fingers. 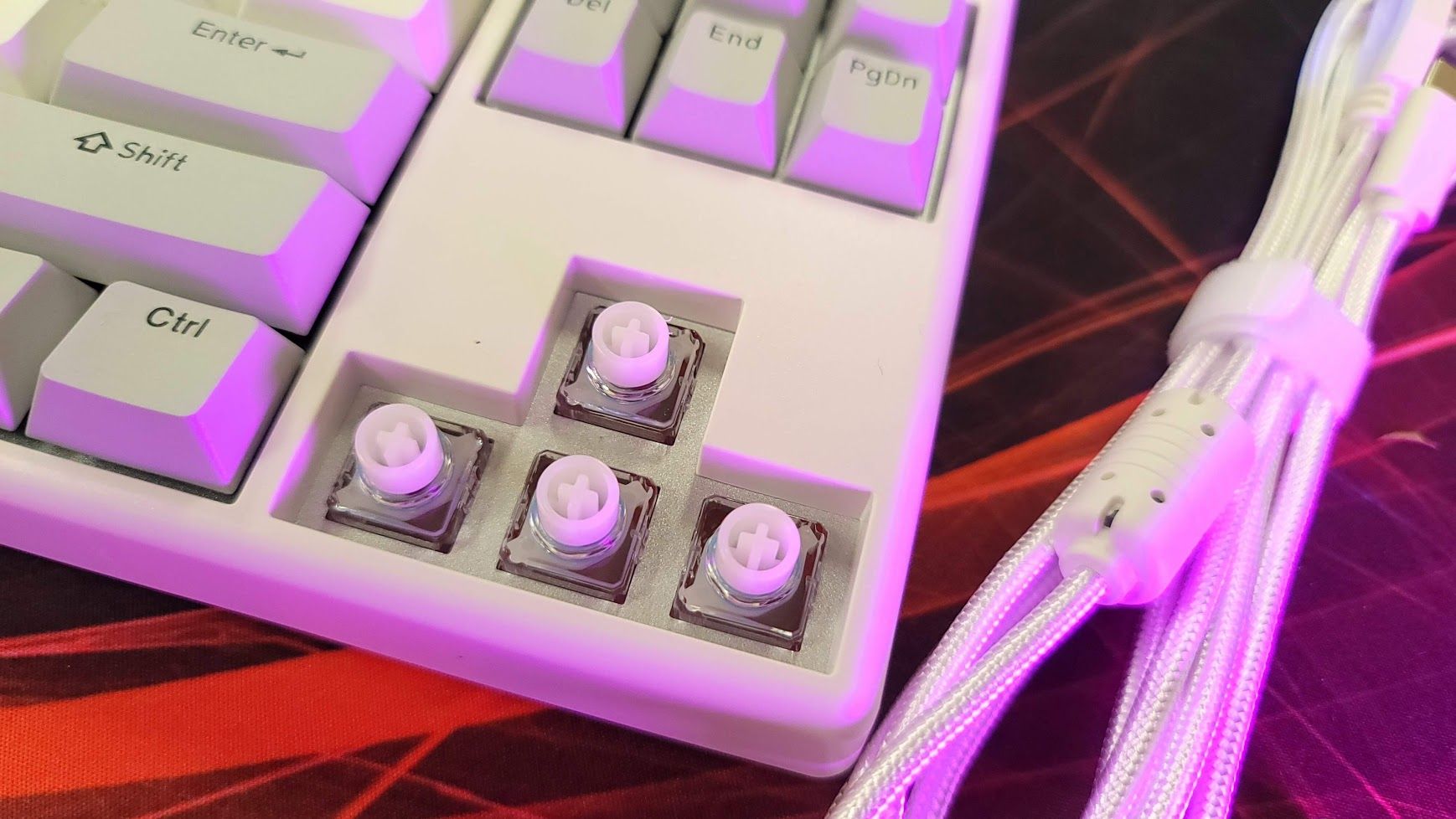 And sweet they are. I’m of the camp that love electro-capactive switches. NIZ’s do feel slightly different from genuine Topres but the differences are small. The light weight of the switches is one half of the recipe. The other is that lovely softness. If you’ve ever used silenced key switches, you know a bit of this. It’s as if every key press is cushioned — because they are. Compared to a rubber dome, which can feel mushy, NIZ’s switches still manage to feel very clean and smooth, like a mechanical switch. I’m of the camp that believes these can offer the best of both worlds, so long as you aren’t looking for a lot of variety in your typing experience. If you invest in this keyboard, you won’t be pulling them out to swap in another for a different feeling.

If you’re a fan of customizing your keyboards, you’ll also be happy to know that these switches feature MX style sliders and will be compatible with most aftermarket sets. 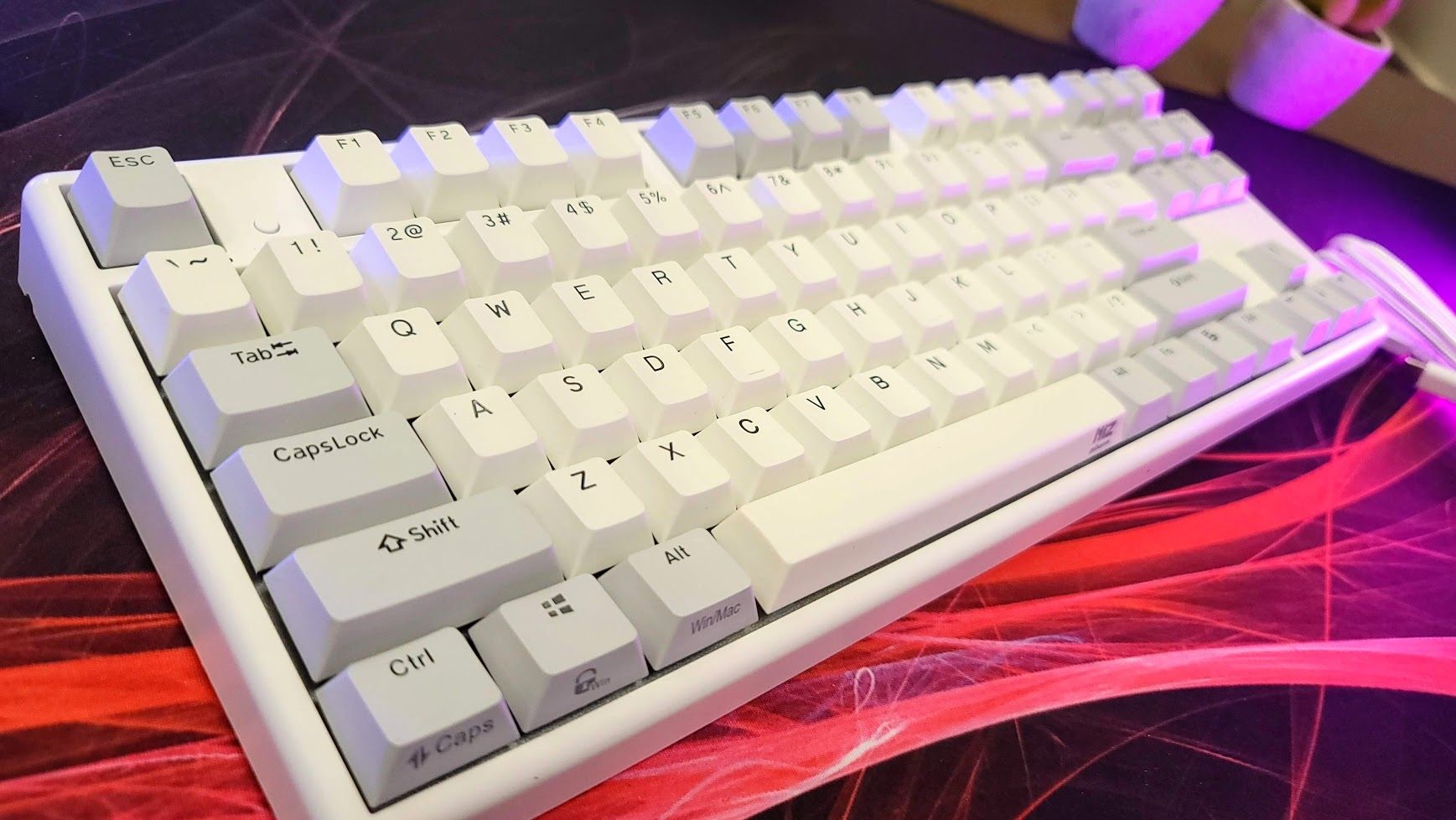 The NIZ X87EC isn’t filled with bells and whistles. There’s no RGB or wireless on this version and all of your programming will be done through software. Instead, what you’re getting is an outstanding typing experience, the feel of a Topre without the price of a Topre. At $155, it’s far cheaper, too, making this a budget keyboard, if in a different category than most I review. Still, I would have liked to have seen a little more, like onboard macros or a single-color backlight. Still, if you’ve ever been curious about EC switches, this is one of the most cost-effective ways to try one for yourself and get a very solid keyboard in the process.