Welcome to Budget Keebs, our new column where we take a look at affordable mechanical keyboards and see how they stack up, even though they cost less. In today’s introductory article, I’m taking a look at the Epomaker Ajazz K870T. It offers per-key RGB, PBT keycaps, as well as wired and wireless connectivity through Bluetooth. Is this your next budget banger? Let's take a closer look and find out! 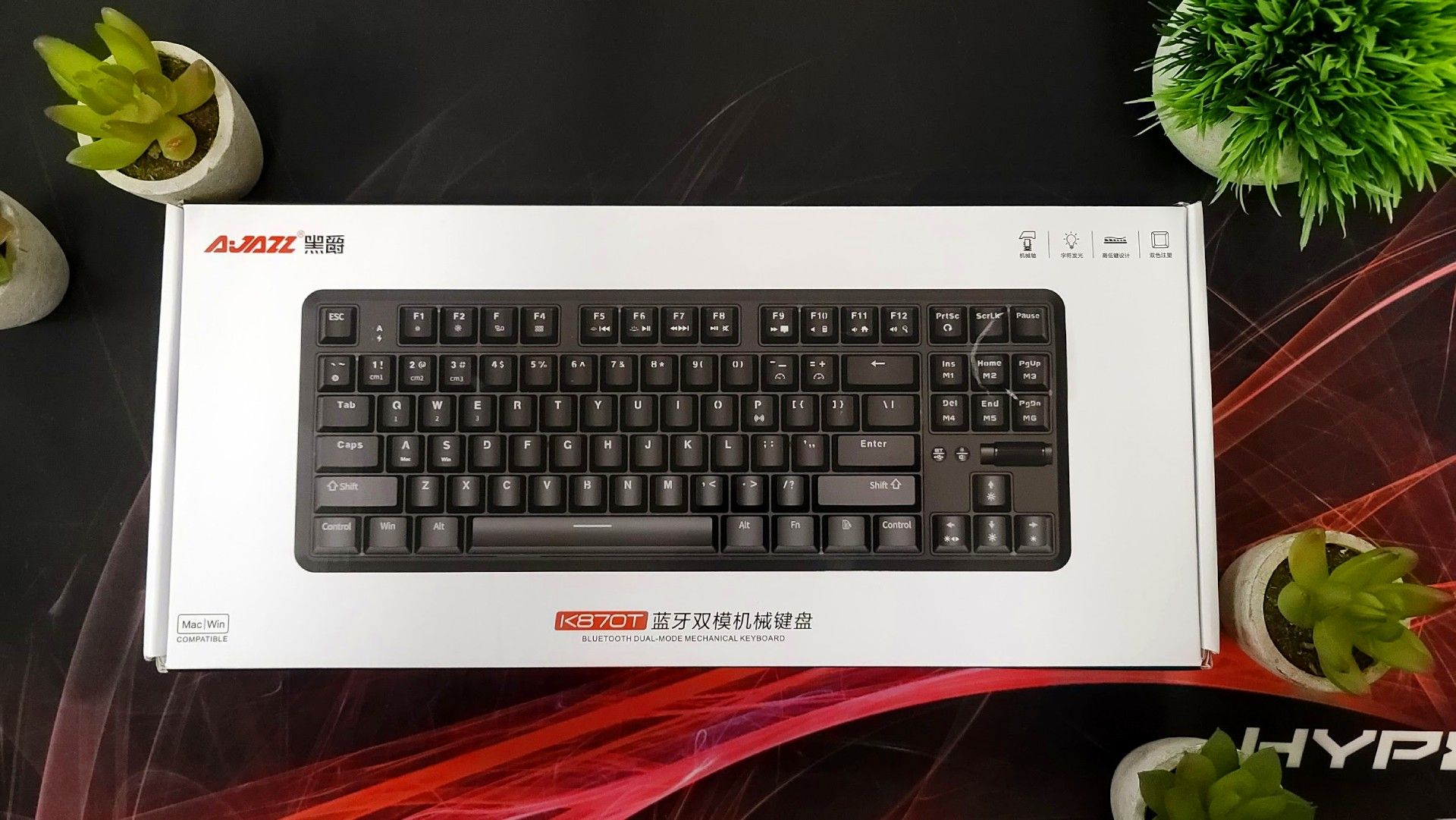 Since this is our inaugural edition of Budget Keebs, we'll begin with the question why: why the need for a special column just devoted to budget keyboards? As mechanical keyboards have continued to rise in popularity, what's considered an "acceptable" price point has pretty radically changed. It's not uncommon today to see a flagship keyboard retail for $199 or even $249 dollars. As someone who has followed this industry for years, I've come to a place where I recognize that gaming companies are trying to define a "new normal" for keyboards. It's frankly too much for many gamers and often ridiculously overpriced.

In this series, my goal is to take a look at more affordable keyboards like the Epomaker Ajazz K870T. Maybe they'll be boards you've never heard of before or only seen on Amazon listings. Maybe they'll be from tiny brands or have left you with questions on their product pages. My purpose here is to take a look at boards that are comparatively lower priced and see how they stack up against their more expensive competition. If there's is one thing I've learned having trafficked in well over 150 mechanical keyboards - - everything from the multiple custom keyboards I've built myself to affordable boards like these - - is that price doesn't always match up to quality. 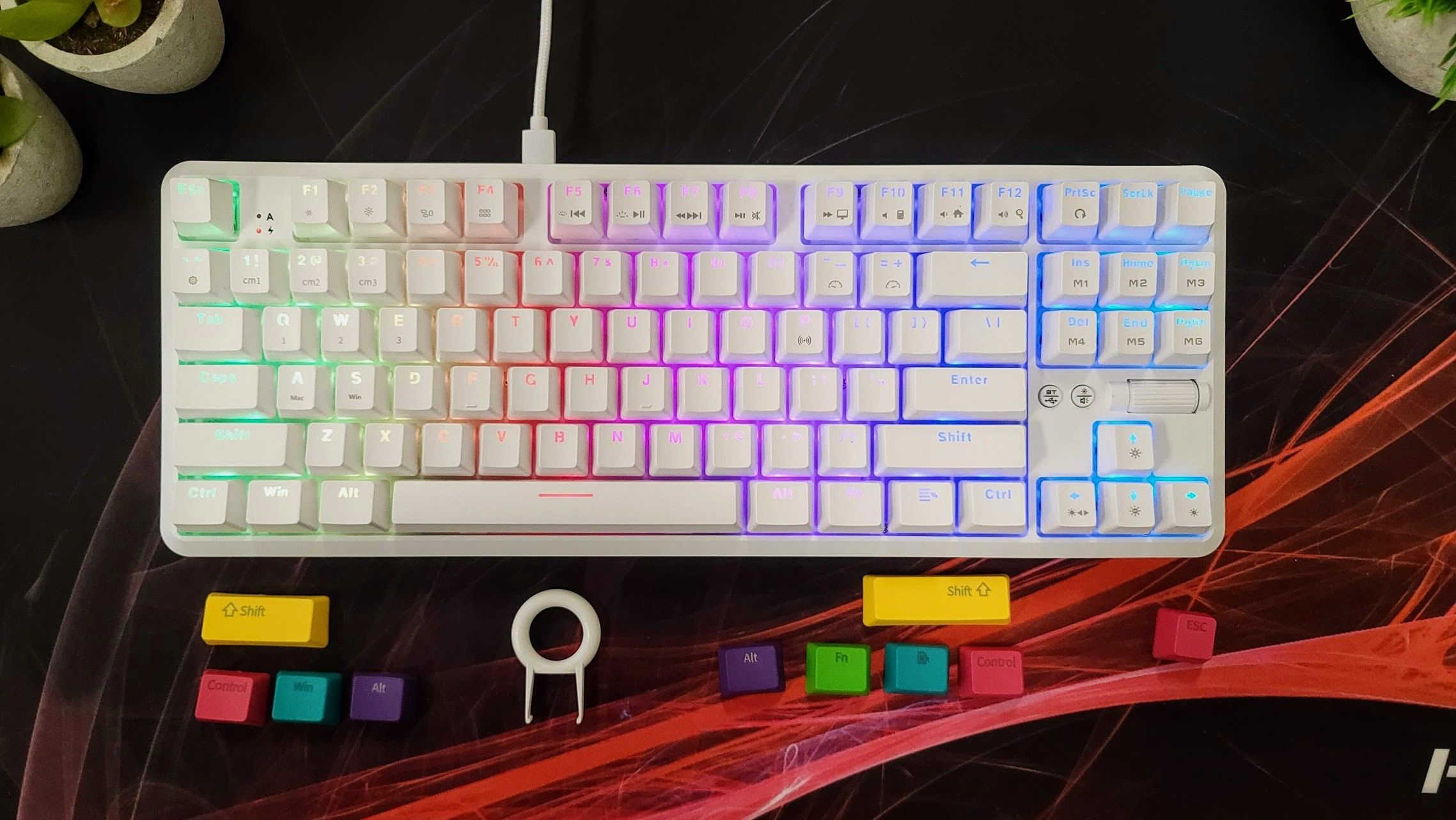 This brings us to the Ajazz K870T, a keyboard made in collaboration with Epomaker, whose also supplied the sample for this article. It's available for $69.99 and sometimes less. High points include hybrid wired/wireless connectivity, per-key RGB backlighting, PBT back-lit keycaps, and a nifty multi-function scroll wheel. It's also compatible with Mac, so you can easily match it with either system with no problem.

First impressions are positive. The keyboard has a good heft to it and doesn't feel cheap. The case is entirely plastic but feels solid and even dense when typed on. I didn't disassemble it, but it's likely Ajazz used a steel plate for that heft and rigidity. The denseness also makes the case feel full. There's no spring reverb or ping sounds whatsoever. Ajazz also took the extra step of lubing its stabilizers. The spacebar still has some rattle but the other large keys feel and sound great. Take note, gaming companies. 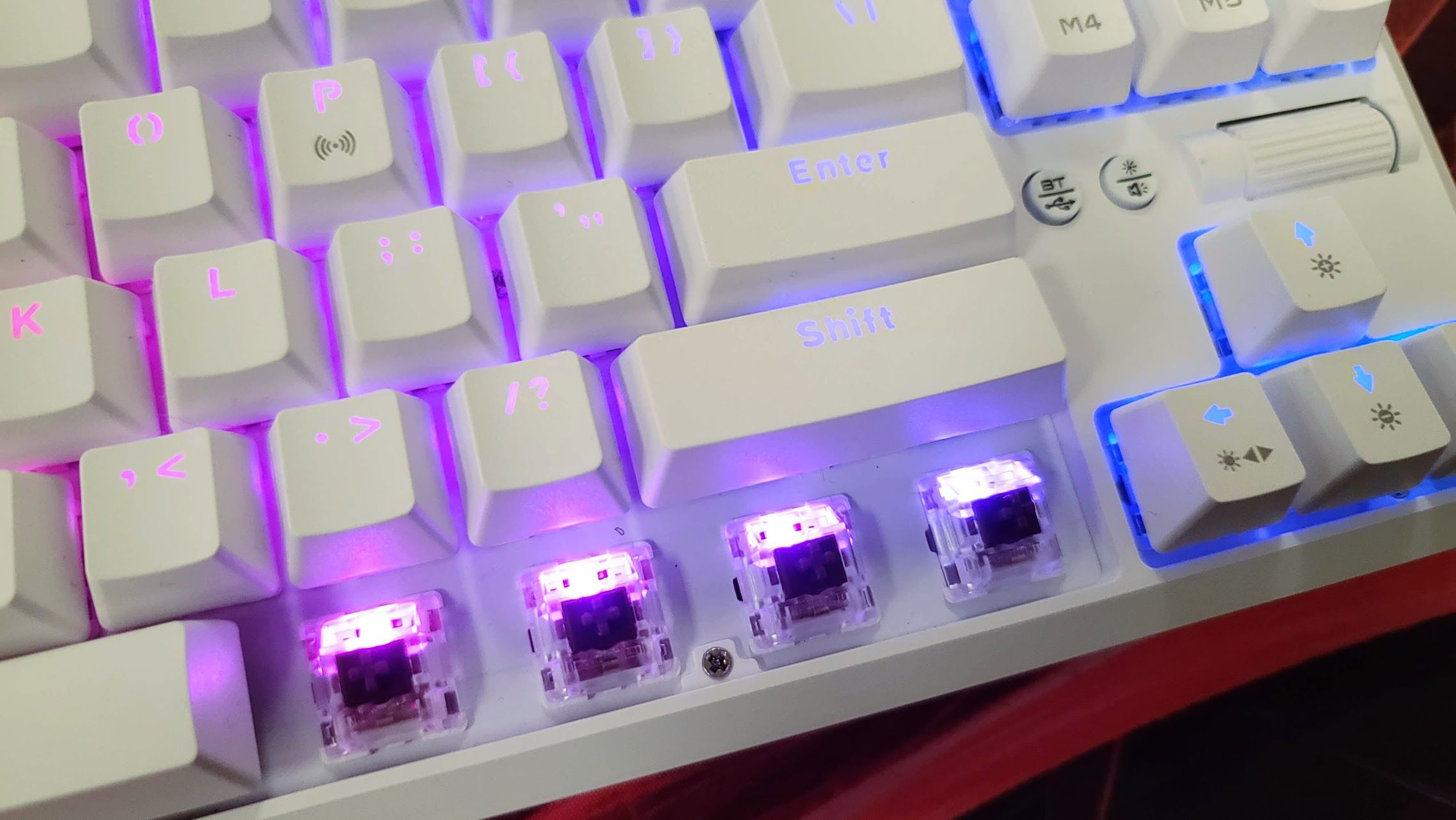 One of the most common areas of compromise is switches. Cherry MX switches are expensive and will quickly drive the price of any keyboard up. The good news is that since Cherry lost its patent some years back, keyboard switches are extremely similar no matter which brand you go with. I'm used to seeing Kailh and Gateron, but the K870T uses Huano switches. That name may sound familiar because Huano switches have appeared in gaming mice for years.

This was my first time using Huano switches in a keyboard and my first impressions are positive. My sample came with brown switches which, as usual, are lightweight and tactile. They feel stiffer than Cherry MX Browns and have a more noticeable bump. Unfortunately, I wasn't able to find any detailed information on them, so their lifespan and actual weight are mysteries. I wouldn't be surprised to find it less than Cherry, however. 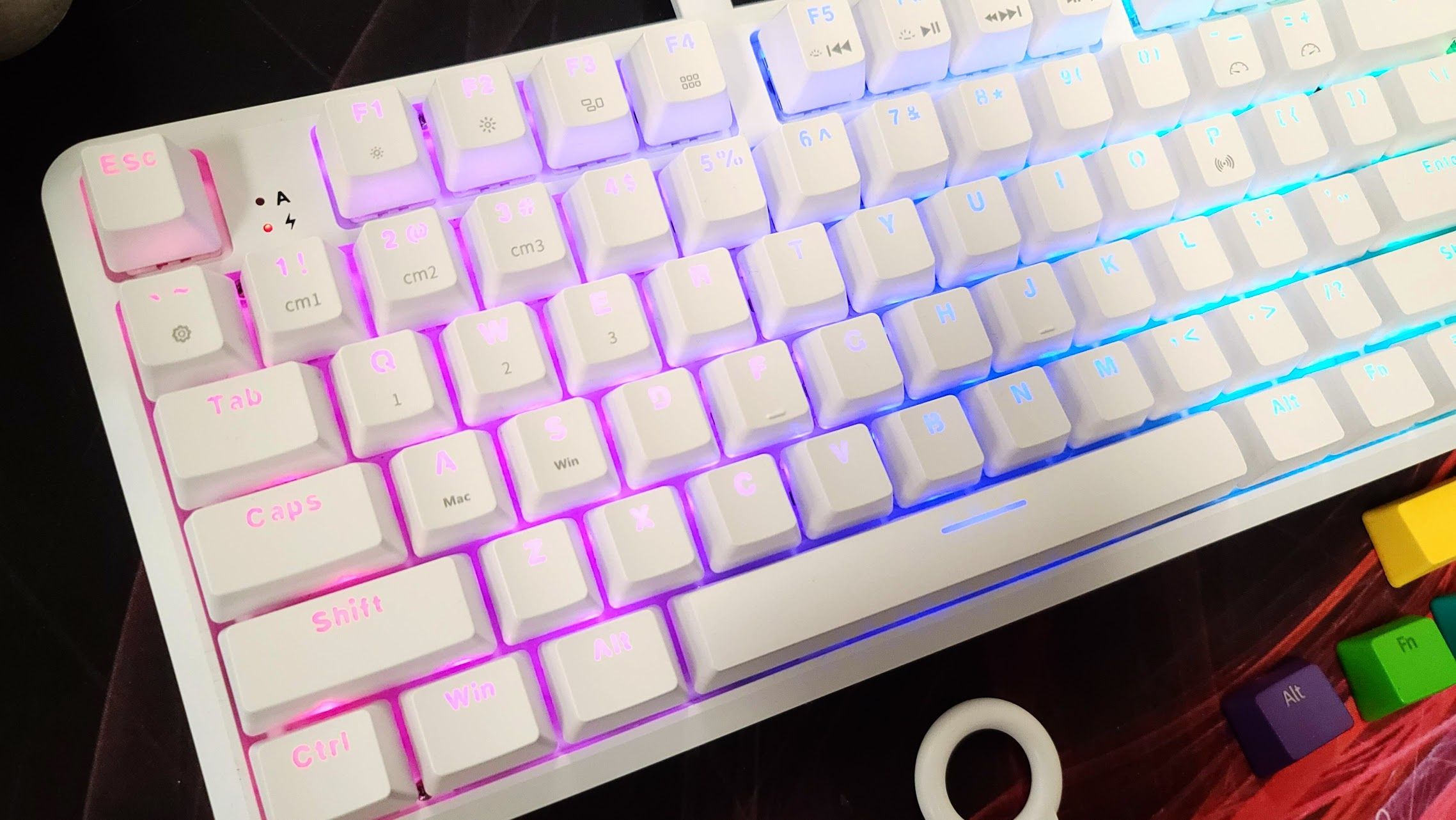 The keycaps are more of a mixed bag. They're PBT and back-lit, which is nice for durability and typing in the dark. At the same time, they're made thin to allow the RGB lighting to shine through which you can feel when typing and some legends look stenciled. That we're getting PBT at all is respectable, and I can get behind enhancing the RGB lighting, but I'm not a fan of those breaks in the legends. My board was the white version and the color really allows the RGB lighting to reflect brightly and create a "bed" under the keys. 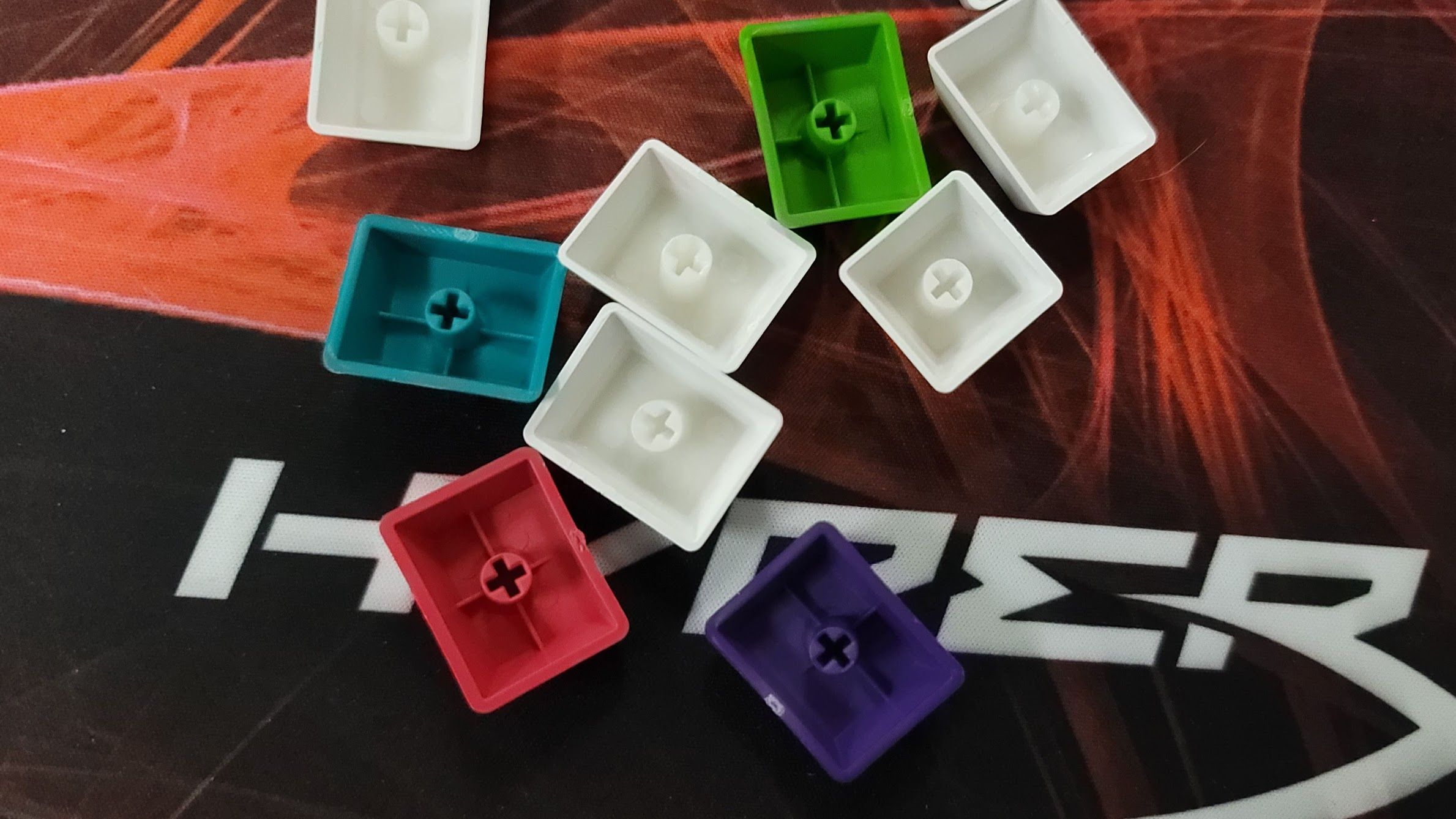 The board also comes with a selection of colored keycaps which give the keyboard a unique character that will be hit or miss with users. I personally like the injection of color, but the caps the colored keycaps aren't backlit, so you can't see them in the dark. They're also made of thicker plastic which makes the others look a little cheaper in comparison. Honestly, though, I think it's worth it. The dose of color won't be for everyone but it really gives this keyboard a dose of personality. 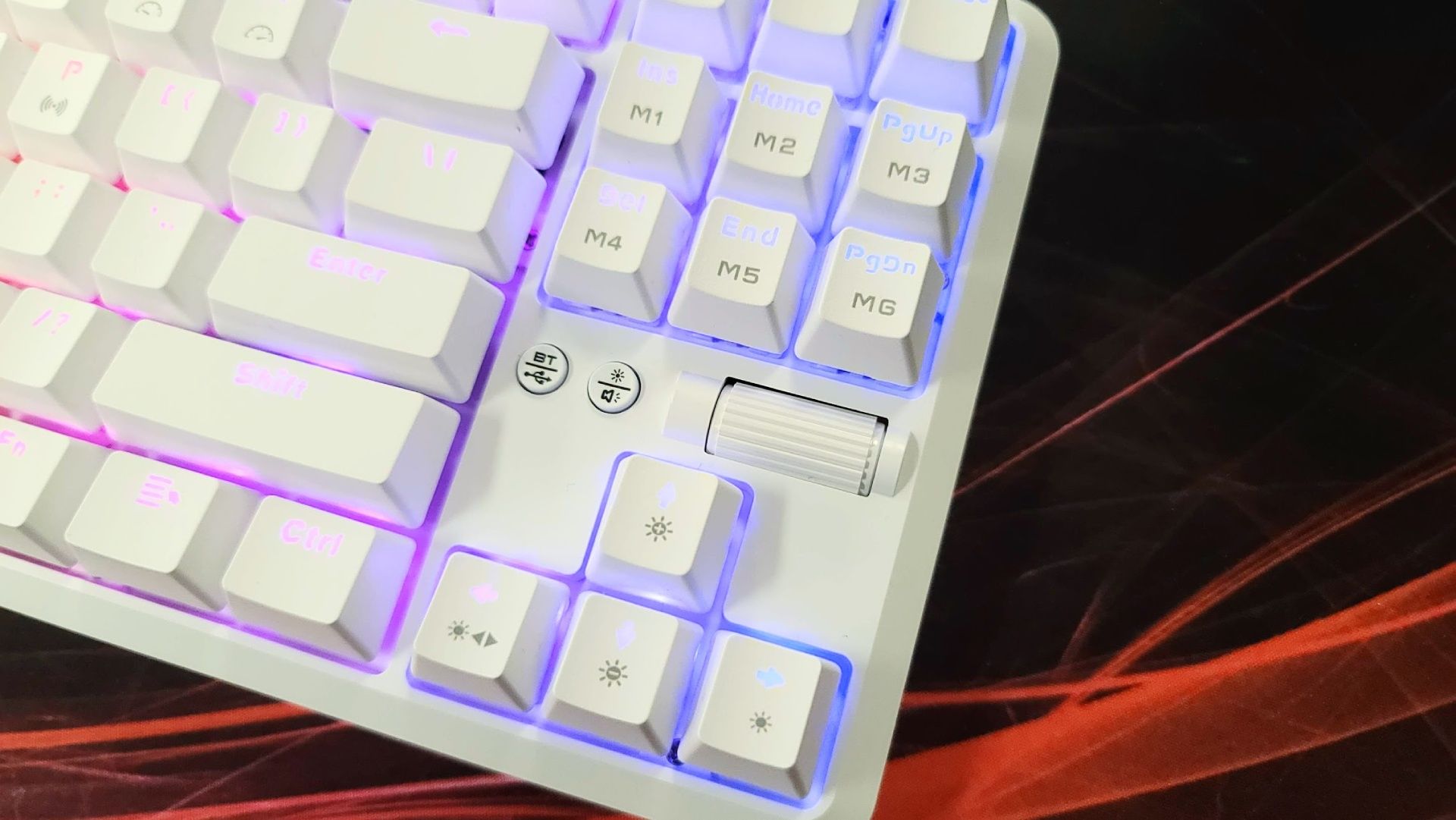 I was impressed with the lighting effects. It's not uncommon to see affordable mechanical keyboards feature zoned lighting or have a static multi-color layout. This board allows you to choose from 18 preset lighting options but they flow across every key like more expensive keyboards. You have your standard rainbow variatons, breathing, and reactive typing, or a selection of static colors.

Bluetooth works well and reliably. It can be paired with up to three different devices and swapped between on the fly using Fn+QWE. It's as good as my Keychron or any of the other Bluetooth enabled keyboards I've tried. Like all of those, I wouldn't use it for gaming where responsiveness matters, but I've typed this whole review on my Note 20 Ultra 5G without any noticeable typing lag. The battery life is in the triple digits with backlighting off but only 8 hours with backlighting on and less if you're running a rainbow at full brightness. 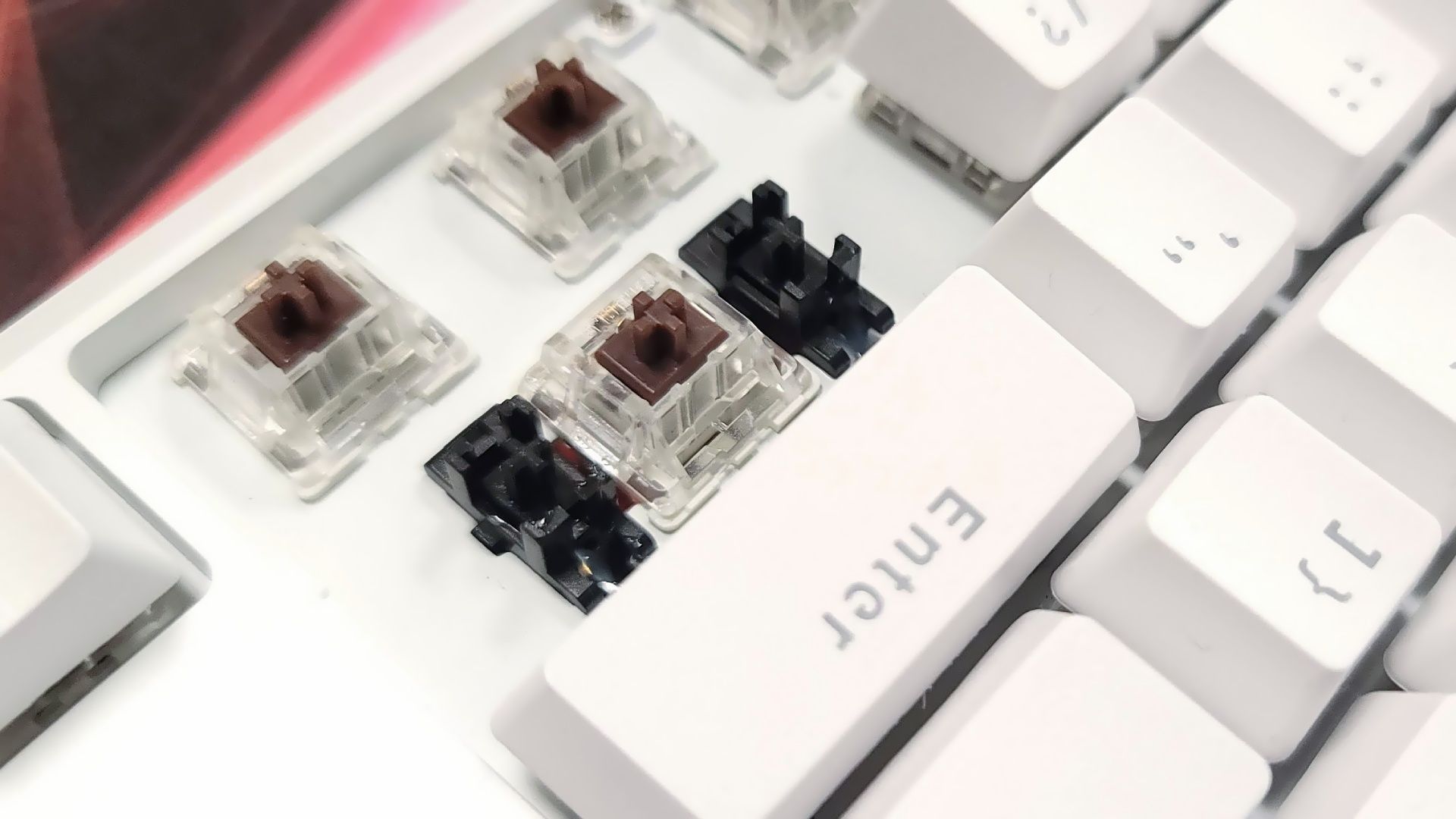 This is a budget board, so you should go in expecting some compromises. Here, there are a few that could be deciding factors, especially for gaming. It features NKRO, which is great, but it's also not programmable and has no software that I could find. Macros will have to be set in-game or using AutoHotKey and you're out of luck for key remapping and advanced shortcuts.

Lighting is also more limited. You have what's set and, though there are colors to choose from on most, the board can't do a true white color; instead, it's more of a very light blue. I love the brightness and think one of its neatest features is that the volume wheel can be swapped to adjust brightness or volume at any time, but dialing in exact hues just isn't possible. If you have a basic color, like red, green, blue, or yellow, you'll be in luck. Something like purple is going to require you to settle.

Another shortcoming is that it only uses Bluetooth 3.0. This is one more reason to leave Bluetooth for productivity for turn-based games. 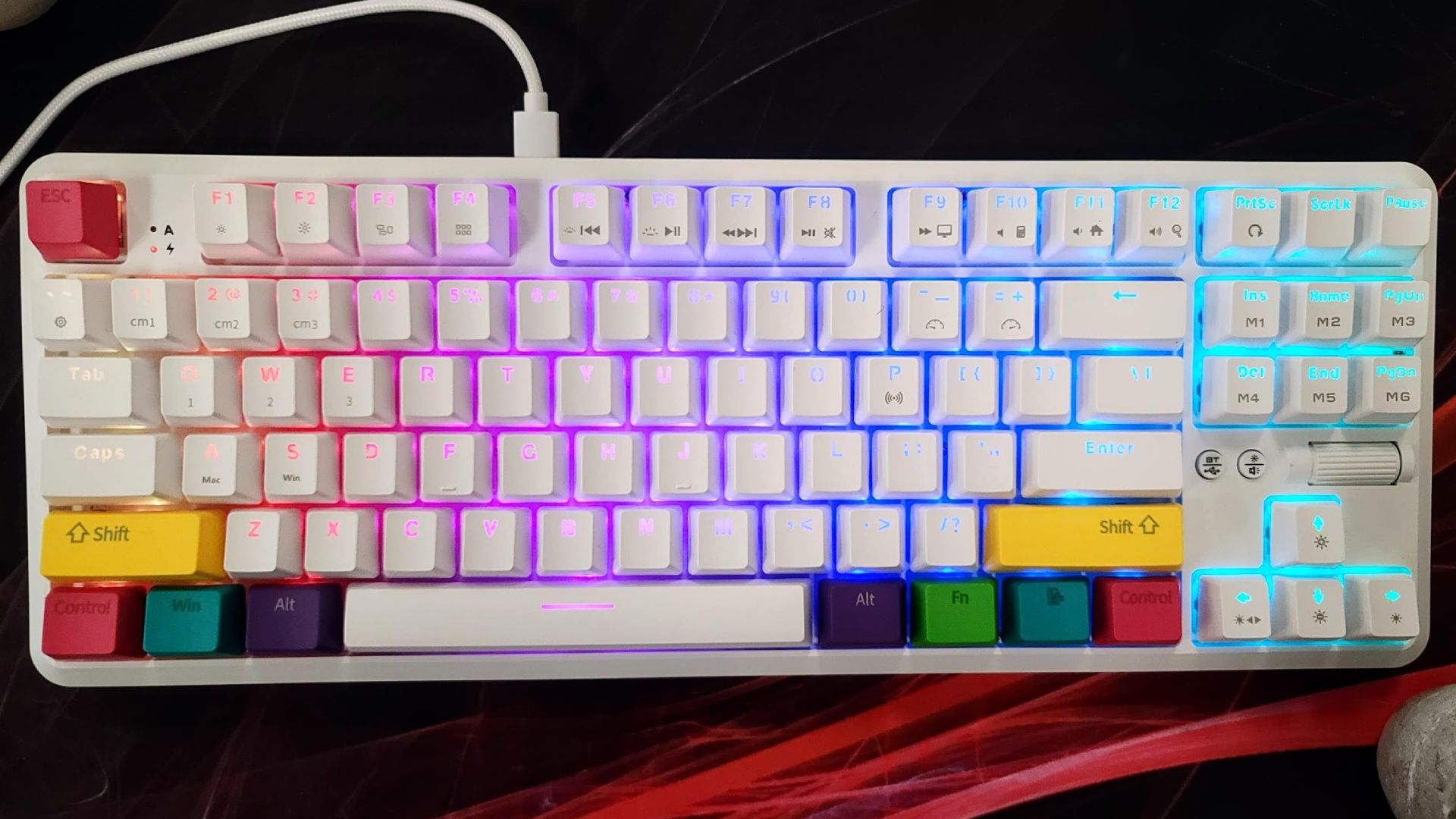 Taken as a whole, the Ajazz K870T is actually pretty darn impressive. The build quality and typing feel is surprisingly good for how much it costs. The trade-offs I found all feel fairly minor when taken alongside the positives this board has to offer. The biggest unanswered question is in the reliability of the switches, but given that these are Cherry MX clones, I would expect them to last for at least several million presses before showing any issues. As a Budget Keeb, the Ajazz K870T is solid.

The product described in this article was provided by the manufacturer for evaluation purposes.
7.0Good
Pros
Cons
Tags
Mechanical Keyboards
Peripherals
Epomaker
Ajazz