Earlier this month, we took a look at the Bowers & Wilkins PX5 on-ear headphones and were impressed. Today, we’re looking at the latest edition of their big brother, the PX7 Carbon Edition. Coming in at $399, they don’t come cheap but offer a luxurious carbon fiber design, a fresh blacked-out colorway with over-ear cushions, active noise cancellation with 30 hours of battery life, and the high-quality sound Bowers & Wilkins is known for. If you’re looking for the best of the high-end wireless headphone market, you’ve probably come across the PX7s already. Let’s see if they’re worth picking up for yourself.

Bowers & Wilkins is a legendary company in the audio business. Its speakers are in Abbey Road Studios (yes, that Abbey Road), it makes some of the best standalone monitors in the business, and it’s an official partner of Maserati and McLaren for its sound systems. From a company like this, you expect excellent sound. You expect a luxurious design. You expect to buy into all of that history and experience and to feel it every day you use your new headphones.

The PX7s deliver on the luxurious design. Like the PX5s, they feature a race-car inspired design with contoured gimbals connecting the headband to the earcups. There is an excellent mix of materials that really makes these headphones stand out. The headband is durable yet lightweight carbon fiber. The earcups are trimmed in fabric on the outer rim and metal faces where you’ll find a diamond-cut B&W logo that reflects lights. The ear cushions and headband are leatherette and delicately balance providing enough cushioning with remaining slim and low profile. I was sent the Carbon Edition, which is blacked out, but the headphones are also available in Silver and Space Gray.

The PX7s share many of the same design elements as the PX5s we reviewed earlier this month. While the PX5s feature an on-ear design, the PX7s are over-ear meaning they’ll completely surround your whole ear rather than sit on top of it. The earcups are also oval shaped, which lends them a unique look and functional benefits from fitting around the ear instead of pressing directly on it. This does make them a bit bigger and heavier (310g vs 241g) but it’s a worthwhile trade-off unless you really prefer the on-ear design. Even though they’re bigger, they’re slimmer and stand-out less than the PX5s, which is preferable for a headphone intended to be worn out and about. The earcups also swivel to lay flat on your chest when not in use and that same slim design helps them stay out of the way when turning your head. 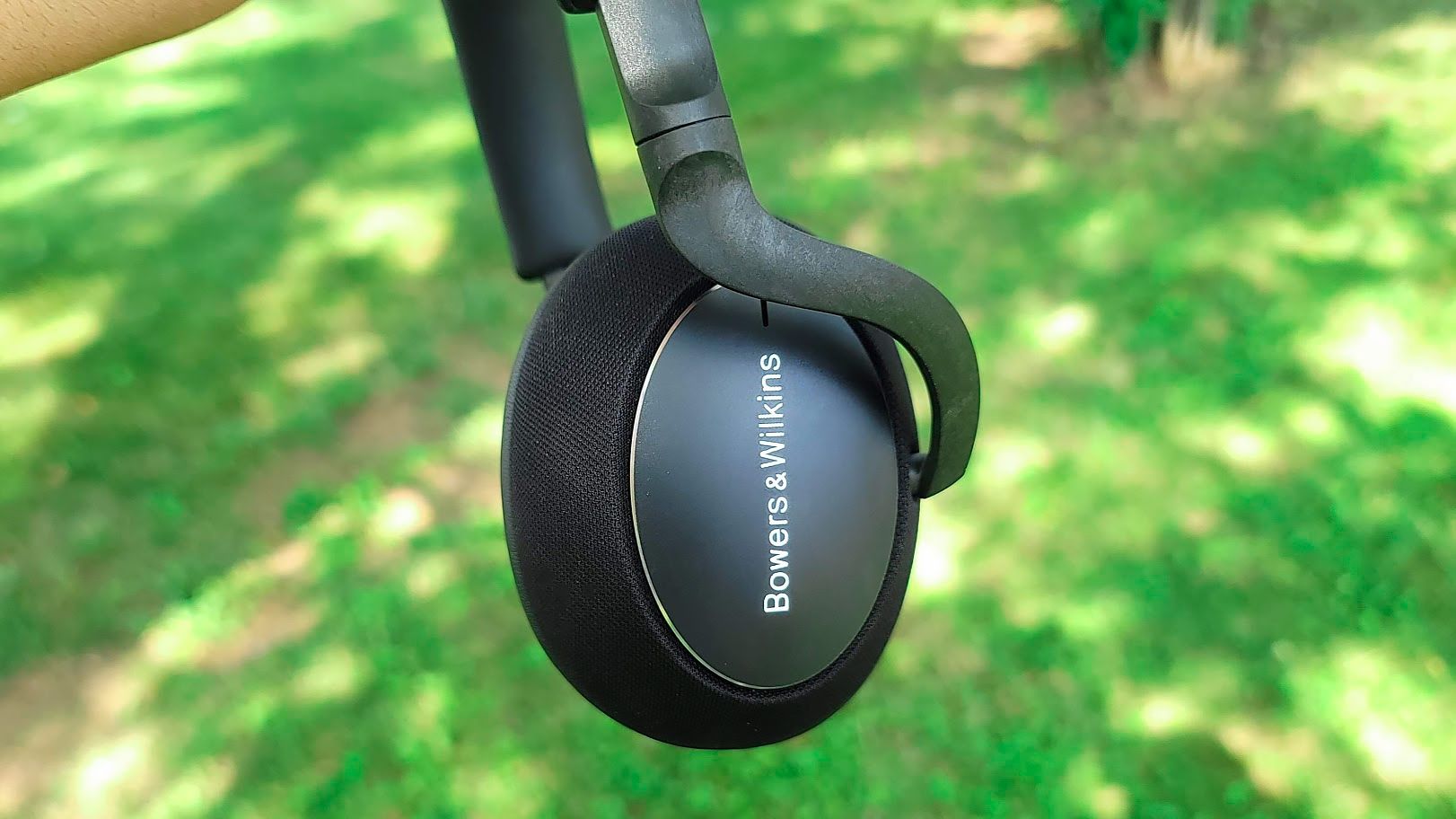 That added size also seems to have allowed B&W to use a larger battery. These headphones are rated for 30 hours. Listening to them off and on throughout the day, I was able to listen for a solid five days before needing to recharge them. If you do run short, they offer fast-charge support so 15 minutes plugged in over USB or into an outlet returns 5.25 hours of listening.

That’s not the only upgrade here. The drivers themselves are also larger, coming in 23% larger than the PX5s at 43.6mm. Bowers & Wilkins have gone for a traditional single dynamic driver configuration in each ear but have tuned them in such a way that most users should find them to be an enjoyable listen, but benefit from a little bit of EQ. There’s plenty of bass without becoming overwhelming and plenty of detail in the mids and highs that can be drawn out if the PX7s are too warm for your taste out of the box. The headphones support high-res bluetooth for premium listening on the go, including AptX Adaptive, HD, and Classic, as well as AAC and SBC for normal listening. No LDAC, though, so fans of Sony’s codec will be out of luck.

Active noise cancellation is the other half of the equation with these headphones. ANC is controlled using a button on the left earcup and can cycle between Off, Low, and High. Holding the button enables Ambient Mode which activates the external mics so you can hear the world around you and stays activated until you press the button again, which is a nice touch if you need Ambient Mode for more than a few seconds.

Along the right earcup, you’ll find an on/off switch that can be toggled upward to enter pairing mode. Below that is a trio of buttons for controlling calls and media and summoning your virtual assistant. The top and bottom buttons are used for volume but the center can be double and triple-tapped to navigate tracks or answer/end calls. The multi-function button is shaped into a crescent, which I found to be a nice touch and allowed me to confidently control the headphones without mistakenly pressing wrong buttons as I became used to them.

Another neat quality of the PX7s is their ability to adapt to different listening scenarios. They can be used wirelessly over Bluetooth or connected to your PC over USB-C to listen while charging. The built-in DAC is very good and supports 24-bit listening at 96kHz, making it suitable for lossless audio with Apple, Tidal, or your own FLAC files. They also include a 3.5mm jack to plug into your own DAC but the headphones will need to be turned on to work, so you should not use these with a separate amplifier or risk damaging the drivers.

Two other features to note here are the built-in wear sensors and the companion app. Like the PX5s, Sony WH-1000XM4s, and a number of other premium headphones, the PX7s include wear-detection sensors inside the earcups. Take them off and your music will automatically pause. Put them back on and it will resume. It's a nice feature and works more reliably thanks to the over-ear design. The companion Headphones app, on the other hand, allows you to set the amount of ANC and Ambient Mode pass through, manage connected devices, and control settings like the sensitivity of the wear sensor, voice prompts, the standby timer, and update software. It also includes a half dozen soundscapes if you’d like to take in the sounds of nature rather than normal music. Conspicuously absent are any EQ presets or the ability to set a custom EQ curve, which leaves you turning to system settings to apply your own custom tuning. 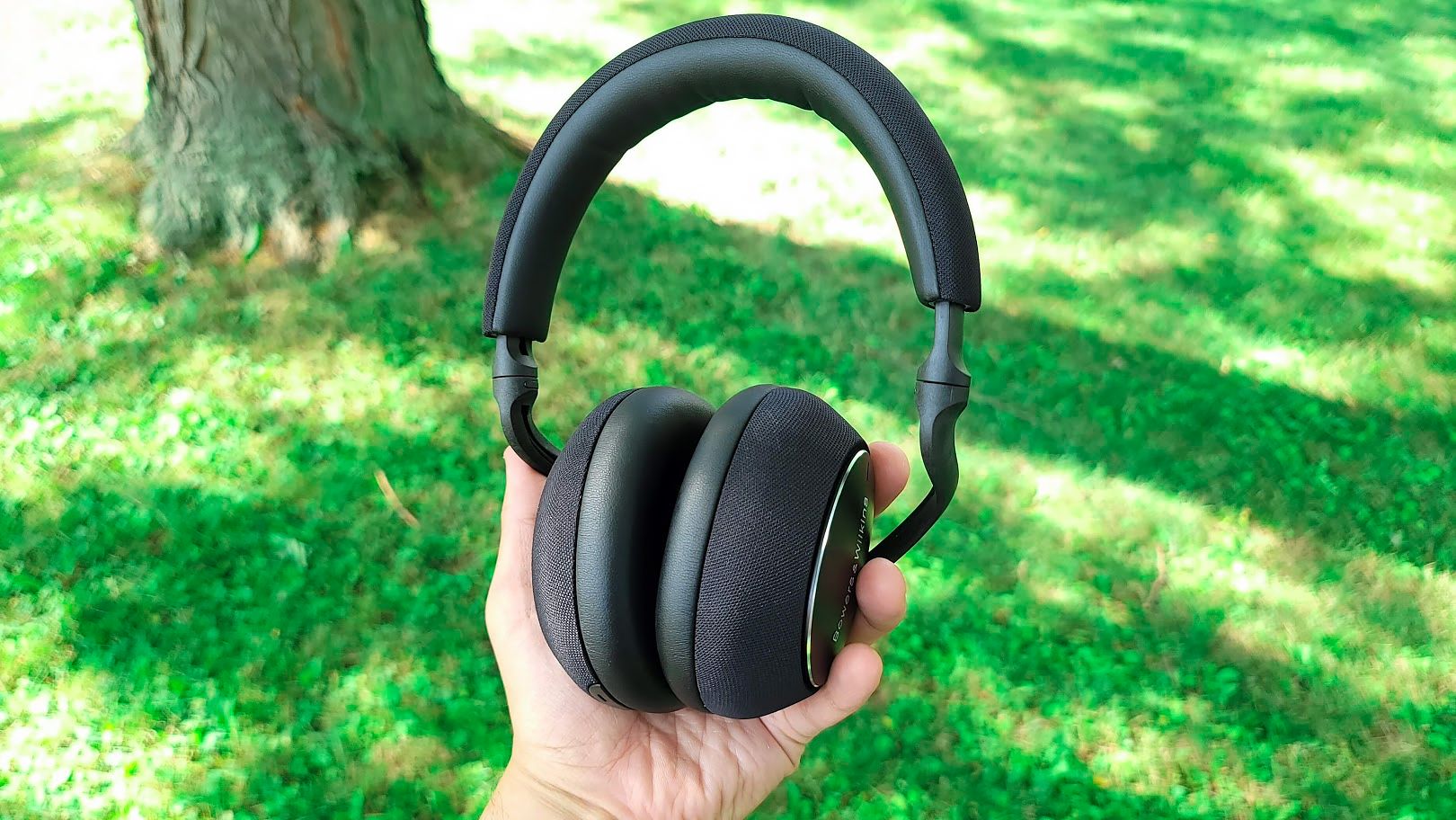 The PX7s are mostly comfortable and feel secure when worn. They’re grippy, as you would expect from an ANC headphone where a proper seal directly impacts the user experience. At the same time, if you’re a glasses-wearer like me, you may find yourself adjusting your frames to avoid pressure points behind your ears. The cushions and headband padding are good but expect some heat build-up at common for closed-back, leatherette-trimmed headphones. Do note, however, that you may need to adjust the wear-angle to avoid hotspots on the top of your head. On my first day with these, my head became sore after less than an hour. Angling them slightly back completely solved the issue but it took conscious thought to position these compared to even the PX5s.

The PX7s are a lush, warm headphone even compared to the PX5s. To be honest, I expected the two headphones to sound mostly the same since, by appearances, they’re variations on the same basic concept. That just wasn’t the case, however. The PX7s are tuned more in the direction of modern and electronic music. They accentuate vocals, bass, and rhythm. For movies and games, it works well and allows the headphones to offer a cinematic experience and a good sense of low-end space for explosions and sweeping soundtracks.

For guitar and string-driven music, some EQing was necessary. Out of the box, some of the detail in the mids sounded hazy and recessed until I applied my own custom EQ to draw it back out. It would have been nice to apply this within the Bowers & Wilkins app but the system EQ on my Galaxy Note 20 worked fine to boost the mids and middle-highs. 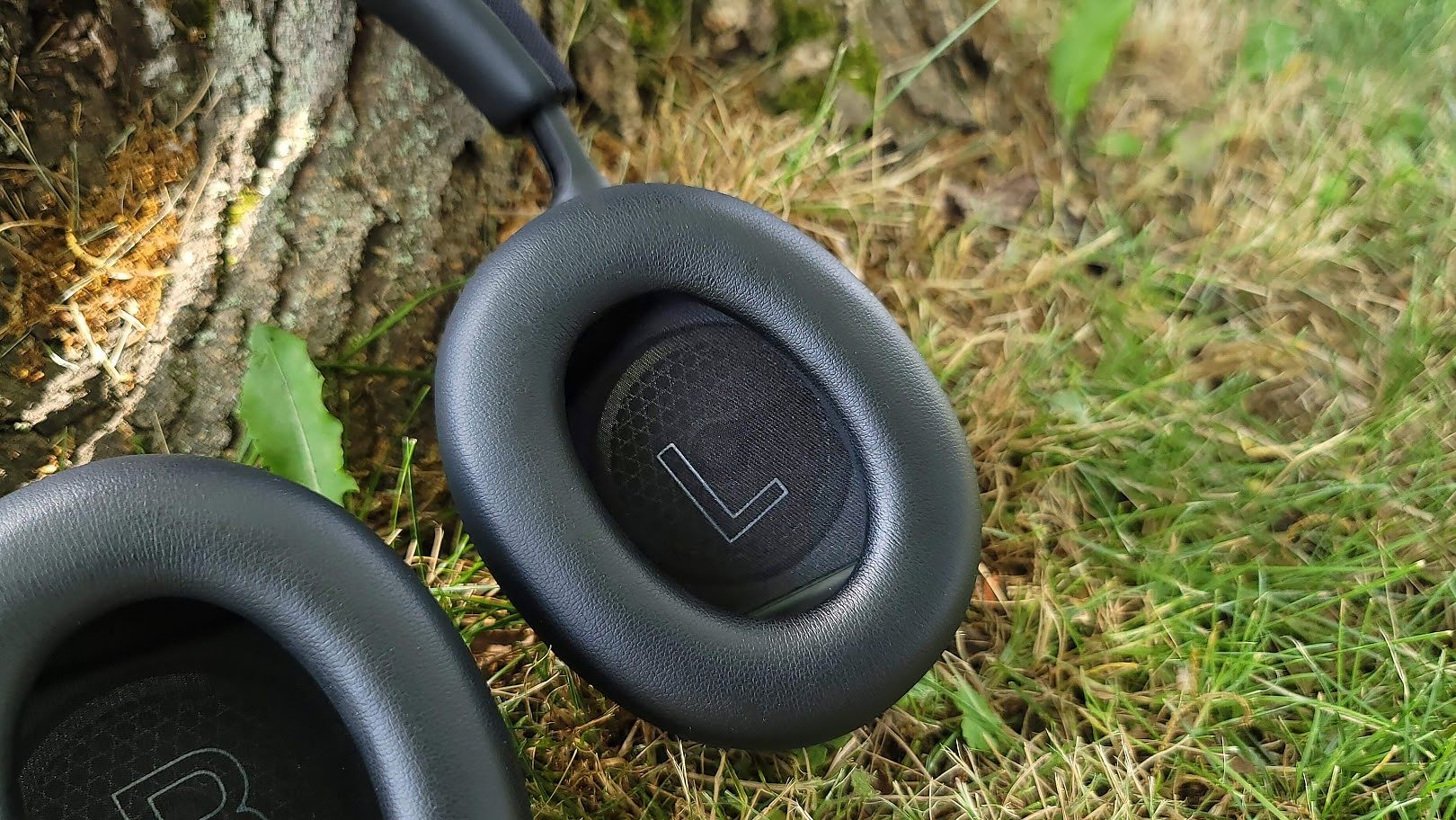 To their credit, these headphones are very resilient to EQ and lose nothing with a little bit of tweaking. I listen to a mix of post-hardcore, alternative, and electronic music. The default sound was fine, but with a little bit of tweaking they easily elevated to sounding great for my music and game library. Tonally, they’ve very enjoyable to listen to and aren’t the least bit fatiguing, so you listen for hours without needing to take a break. There’s an above-average amount of detail retrieval here for a bluetooth headphone, making them better for music than even the Sony WH-1000XM4s. That’s an important win for people who care about sound quality above features since the Sony’s win in features like LDAC and custom EQ support.

Active Noise Cancellation is another high point here, particularly if you plan on using these for commuting. They do a good job of filtering out low frequency noise and are more effective than the PX5s thanks to the over-ear design. I routinely use ANC at home when I need to focus or want to block out noise from elsewhere in the house and these are effective for that too. That said, if you’re looking for the most effective ANC for things like voices and middle/higher frequency noise, the XM4s still filter out more in this range. The ambient mode is quite good too, offering a natural, full-bodied sound that’s ever-so-slightly boosted from what you would hear without headphones on at all.

The soundstage is reasonably large thanks to some smart design with the ear cups. Despite their being fairly low-profile, the inner chamber of the ear cup is angled and offers a good amount of open space. I was impressed at the natural presentation they offered but — and I can’t stress this enough — enable Dolby Atmos. Like the PX5s, these headphones are some of the most responsive to Dolby Atmos available today. Working in tandem with Dolby, the sound becomes much bigger and more spacious without ever sounding unnatural.

This also makes them a much better fit for gaming than you might expect. I used them wired on my PC (bluetooth will still have too much latency for fast-paced gaming) with Atmos enabled and was impressed at just how well they played with Doom Eternal. The imaging and positionality are great on their own but with the space provided by Atmos, they become a great choice for gamers looking for an all-in-one headphone they use for gaming on the go. 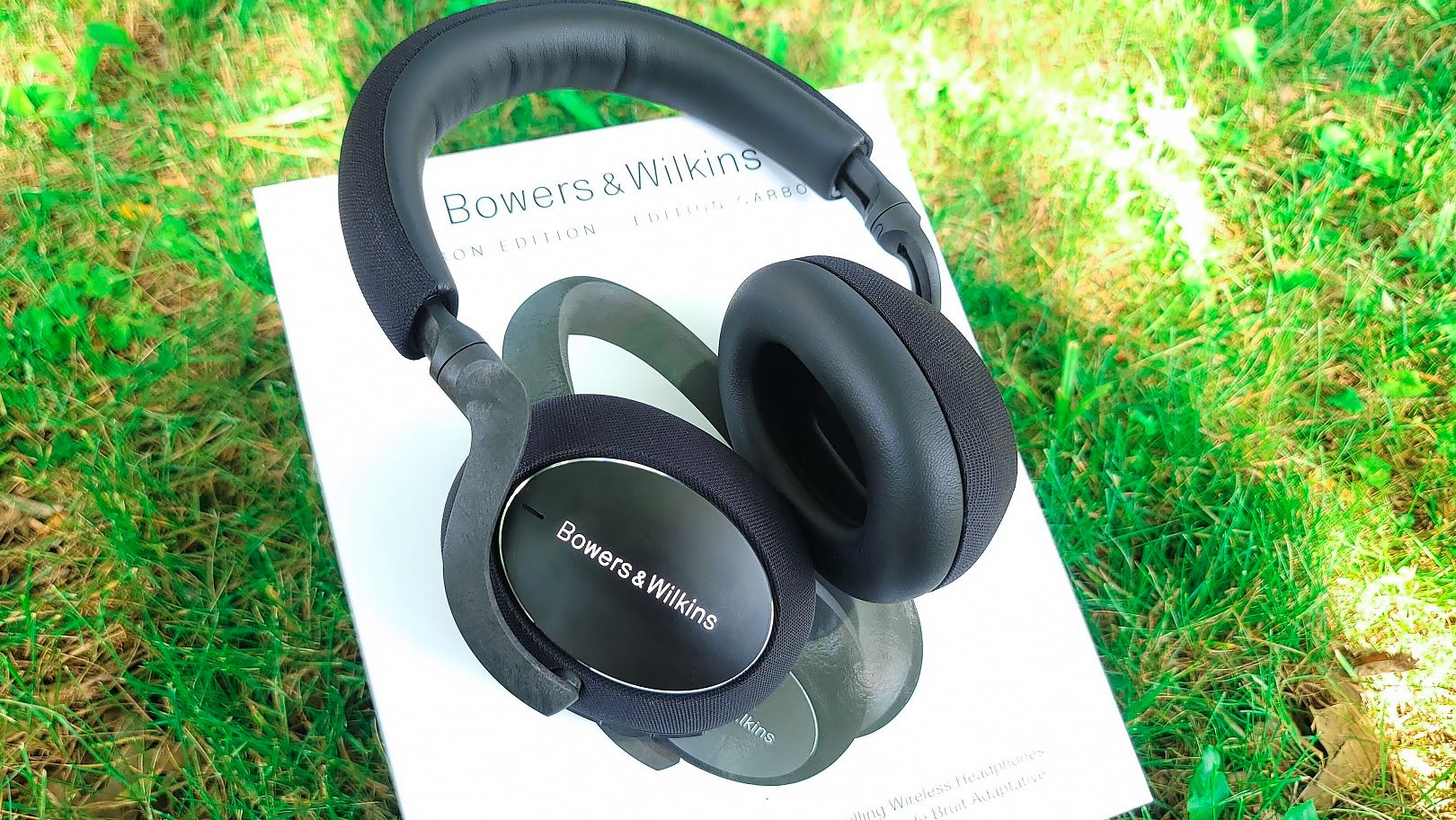 There’s no mistaking that the Bowers & Wilkins PX7s are a luxury product and they have a price tag to match. You’re getting something in return for that high cost of entry, however. If all you care about is ANC, Sony’s XM4s are the better bet, but if you want a well-rounded headphone that offers improved sound and much better build quality, the PX7s earn their higher asking price. At $399, they won’t be for everybody, but they remain an impressive, and impressive looking, headphone.