When MMORPG took on the Yeti X back in 2019, we couldn’t recommend this particular microphone enough. With that said, what could mic manufacturer Blue do to make us want this stalwart of the streaming scene any more? It turns out the answer is to simply give it the WoW factor, quite literally. The Blue Yeti X World of Warcraft Edition is the latest edition to microphone manufacturer Blue’s lineup of audio hardware and it certainly made a striking debut on our desktop this week.

Now available via online retailers and via the Blue online store, the new Yeti X WoW Edition definitely sets itself apart from the moment you equip this new addition to the Blue family. The box comes emblazoned with World Of Warcraft branding and at an initial glance might prepare you for something that’s almost as loud as Blizzard’s new cosmetic choices. Thankfully, this isn’t the case and while the Yeti X WoW Edition conforms to many of the same standards that are obvious in the Yeti X, this is a microphone all of its own.

The usually understated aesthetic that is something of a standard for the Yeti series comes with a few neat new accents this time around. Most obvious of the changes is the gold that now tapers around the base of this WoW inspired model. Planted into the metallic gold rim of the Yeti X WoW Edition is a knowing nod to any fans of Blizzard’s classic MMORPG. A series of runes come carved across the full circumference of the stand, firmly cementing the lineage of this new design and providing an understated advertisement to anybody in the know. The transmog of the standard Yeti X design continues with further gold trim around the top of the mic body and across the Blue logo in the centre of this setup. The metal grille that covers the custom condenser capsules even has a gold hue when set in the right light, making sure that this color choice extends all the way up this version of Yeti X.

Flipping the entire article around, a slightly more obvious advertisement is planted squarely below the pattern control button, as shown below. Despite the tonal shift for the Yeti X WoW Edition exterior, this new iteration still retains much of the minimalistic approach that other Yeti owners are accustomed to. The established shape, material choice, and excellent construction quality and that we’ve come to expect from Blue is apparent. The main gain knob continues to sit front and centre, surrounded by laser etched WoW LEDs to give you clear indication of exactly how loud this mic can go, while the mode button remains exactly where it always has. While these new custom Warcraft LEDs never fail to delight every time they advertise your affiliation, the overall result is a unique piece of hardware that balances an iconic design with a touch of Warcraft flair. 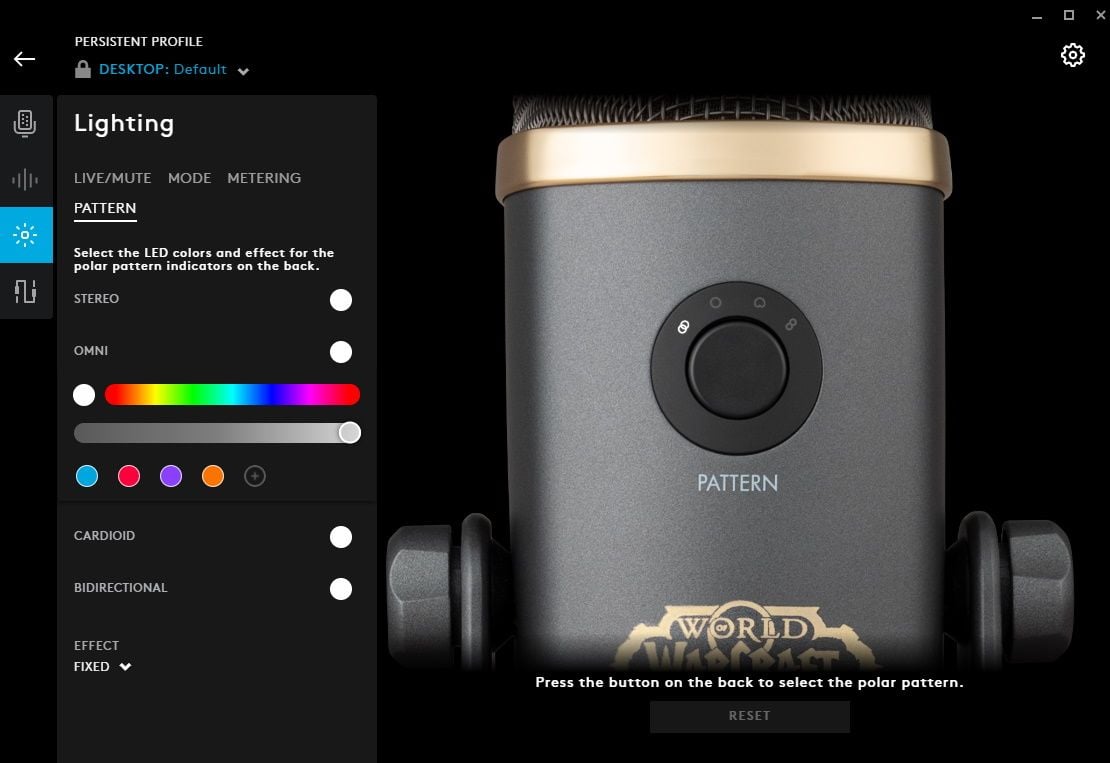 Once plugged in using the bundled USB cable, The Yeti X WoW Edition provides the same range of options that owners of the Yeti X would otherwise get, with a little bit extra too. The mode button on the rear of the mic provides direct access to a move between the cardioid pickup mode, an omni mode for all around recording, a bi directional mode for face to face conversation, and a stereo mode for stereo or ASMR sampling. Switching between these options is almost as simple as plugging in the Yeti and whatever mode you chose doesn’t disappoint. The sound quality on the Yeti X is, without overstating it, exceptional. We called the incoming sound crystal clear’ the last time we plugged in a Yeti X and that still stands true today. The 4 Blue-proprietary 14mm condenser capsules provide recording at up to 24 bits, a step up from the Yeti but no different to the smaller Yeti Nano. That said, the Yeti X WoW Edition should provide a mildly more premium sound than the aforementioned mic and we’ve added a comparison against the significantly less expensive Yeti Nano below. When plugged in for vocals out the box, the Yeti X WoW Edition provides a good tone and range as you’d expect but it will pick up everything around you. As we mentioned back in 2019, the same excellent pickup will continue to grab the sound of the Horde if they decide to visit in the background. Where this Yeti begins to excel, however, is when the bundled Logitech G Hub software stars up. 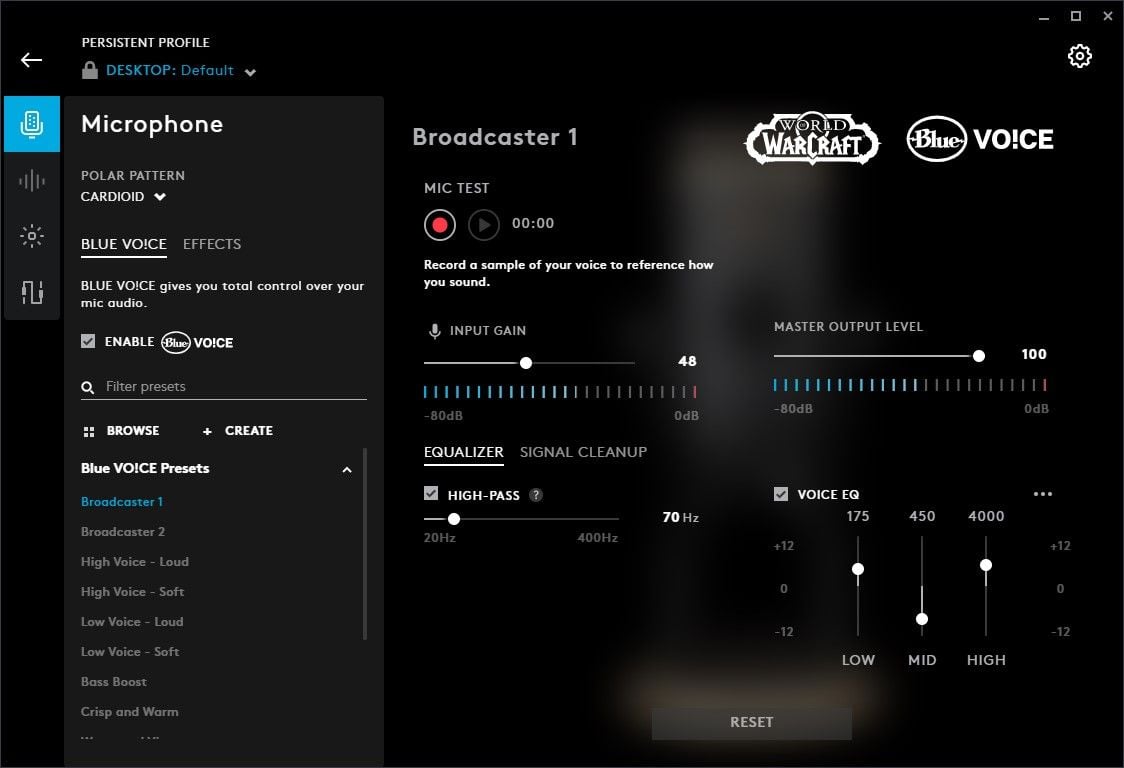 Unlike the Blue Sherpa desktop software, the Logitech G Hub provides more than just another way to change the gain. Instead, this unified desktop experience adds a suite of options that allow the look and sound of the Yeti X to be all your own. Each of the WoW themed LED lights that surround the physical gain button can be color coded to your own preference using the G Hub options. The Live/Mute, Metering, Mode, and pattern LED settings have a full array of colours alongside a fixed or breathing mode. Alone this could be touted as some serious configuration, but we’ve not even delved into the sound settings yet.

Delve into the microphone options available with this new Yeti X variant and you might find the entire affair a little overwhelming at first glance. The Yeti X WoW Edition, just like the original, replicates all the physical knobs and buttons via the G Hub software. More than this, the Blue VO!CE options add an even deeper level of customization that makes the Yeti X WoW Edition worth considering, despite its cost. Alongside the pre formatted selections, owners can dial up a high pass filter, modify the voice EQ, and add software processing that includes noise limiters, gates, compressors and more. While Blue builds some seriously good hardware, it’s easily the software support that elevates the Yeti X line beyond its competition. Just listen to the difference out the box and with the broadcast profile turned on, seriously subduing the background noise and improving the overall tone of the recording.

The Yeti X WoW Edition bundles in a little something extra under the hood for denizens of Blizzard’s hit MMORPG and the Logitech G Hub software options are not all business. Drop down into the Effects menu and 13 Warcraft themed voice modifications are just waiting for you to try out. You’ll be able to transport yourself onto the Pig and Whistle Stage, Stand in the Cathedral of Light, or enter the King’s Chamber all from the comfort of your keyboard. This selection of voice effects also lets you re roll and channel your inner demon, imp, or gnome for a set of fun additions to the standard set of voice modifications.

I’d be remiss if I didn’t also touch on the G Hub system’s sampler options. Allowing owners to import and replay their own clips on stream, the sampler in the Yeti X WoW Edition comes bursting with hundreds of samples form World of Warcraft and the new Shadowlands expansion. This is, admittedly, a nice touch but I’m unconvinced how useful it is in reality.

The Yeti X WoW Edition is a gorgeous piece of hardware. Blue’s ode to World of Warcraft never overpowers the understated premium appeal of the Yeti X, while still allowing fans of Blizzard’s franchise to show off their allegiance. The etched runes and gold flair strikes a fantastic balance that compliment any desk without trying to take centre stage. The sound quality of Blue’s capsules is, as always, excellent and we can’t fault the setup that comes with a ton of options for beginners and more advanced users. While this is on the pricey side at $199, if you are a fan of Blizzard’s World of Warcraft and want to pledge your allegiance with something more functional than a Murloc plush then the Yeti X World of Warcraft Edition is certainly worth considering.