Monitors are the window into the games we enjoy. Don't have a monitor? Then that graphics card you spent so much on will be useless. It's how we see what we're playing, what we're reading or watching, and more. The size - and aspect ratio - of the monitor also plays a huge role. I've been on the hunt for a high-quality ultrawide for years now, and while not perfect, BenQ's MOBIUZ EX3410R 34" Ultrawide 1440p monitor might be one of the best I've used yet.

The BenQ MOBIUZ EX3410R Curved Ultrawide monitor is one hefty piece of kit - and that makes me pretty happy indeed. The monitor itself is hefty, built rather solidly in fact, though the footprint it takes up on my desk is small compared to my Acer Predator 32" 4K Monitor. This is because the stand, while sturdy and built well enough to hold the heft monitor up, does away with the gaudy, over-the-top gamer aesthetic many companies use. Instead, it's two legs on an adjustable stand that has a minimal footprint imaginable.

The monitor itself is rather easy to assemble: simply attach to the stand with a few screws and you're off. Once I had the monitor hooked up to my PC, taking it for a spin was a real treat. I was surprised first and foremost by not the screen itself, but the speakers that emblazon the bottom of the monitor. More often than not the speakers on a monitor are, well, crap. However, BenQ have created something that could be used as a replacement to your standard desktop speakers. 2.1 channel audio pumps high quality sound directly at you, and I have to admit I was taken aback by how clear and crisp it sounded.

It's not a substitute for a good quality sound bar like the Razer Leviathan V2 or even a high quality set of cans, but if you're like me and don't want to wear headphones all day, it's a nice touch.

I've wanted a quality curved ultrawide monitor for some time now, and while I am using Gigabyte's budget version right now, I have come to absolutely adore the MOBIUZ by BenQ. The screen itself looks fantastic, even though it's a VA panel (I'm partial to IPS, but it works here). The panel itself is bright, and one of the issues I have with other VA panels, ghosting, is all but absent.

BenQ's MOBIUZ Ultrawide also supports multi-input as well as picture-in-picture, so you can, effectively, use your single ultrawide monitor as if it were two separate inputs. This is great for a workstation, though I found the feature go mostly unused during my testing.

The EX3410R MOBIUZ Ultrawide monitor has many of the standard features we've come to expect on gaming monitors nowadays as well. From FreeSync Premium Pro and G-Sync compatibility, high refresh rates, as well as the ability to truly tweak every aspect of your monitor's visuals, the BenQ gaming monitor has it all. The monitor also comes with a handy controller to easily navigate its OSD, though there are on-board controls under the speaker should you choose to use them.

The OSD has multiple HDRi modes, from a Gaming-centric one, cinema or normal use. What's nice about these is they can be used instead of Windows' sketchy HDR support. While it's not "true" HDR, it's a great substitute and easy to enable. And thankfully, it looks great regardless of which one you're using.

There are also four LED lights on the back of the monitor to give your wall a splash of color, but they aren't really anything to call home about. It's a "gaming" feature, but not one that I think will really make a huge difference, especially if you've already got RGB lighting in your game room.

The curvature of the monitor might be extreme for some, but I find it absolutely perfect. Games that support 21:9 aspect ratios felt as though I was being enveloped by the world in a way that no other ultrawide has come close to doing.

Games on the monitor look superb. Being able to tweak color and lighting settings ensures the image is crisp and clear regardless of what I was playing. On other panels, moving my camera at night might see stars ghost across the screen - here on the MOBIUZ, the image quality was excellent and didn't have any of those issues. Playing The Elder Scrolls Online: High Isle made me feel closer to the action, and games like PlayerUnkown's Battlegrounds didn't seem too claustrophobic as I simply had more pixel real-estate to play with. 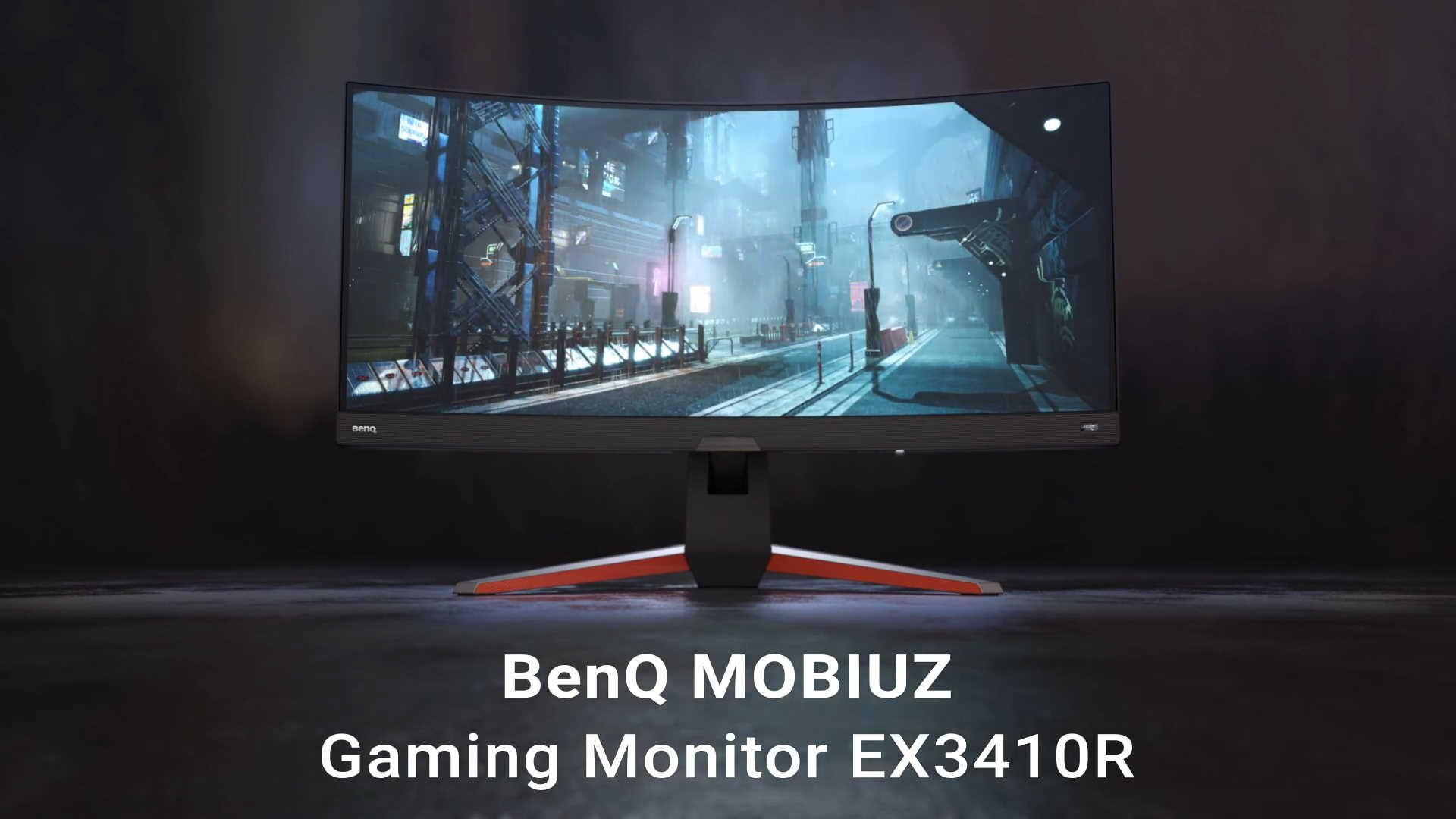 I also love that the panel is 1440p instead of a 1080p monitor. While the last monitor I reviewed, Acer's AOPEN Super Ultrawide monitor was 1080p and didn't have the screendoor effect that I typically see with these resolutions, I would have preferred 1440p to minimize the chance. Here, the MOBIUZ EX3410R avoids this with simply more pixels to play with.

While rated with FreeSync Premium Pro by AMD, the monitor is GSync compatible, something that my RTX 3080 Ti picked up right away. Setting up VRR was simple, and motion on screen, especially when framerates start to take a hit, is smooth as butter.

Additionally, the picture modes afforded by the OSD really make colors and detail pop on the EX3410R. I found myself taking the Game HDRi mode and tweaking the light tuner in the settings to get the perfect balance between light and dark scenes in games. Elden Ring looked muddy on my Gigabyte monitor, but tweaking the light tuner on the MOBIUZ made darker scenes pop with more detail than ever.

So should you buy this monitor? At $629.99 it's not cheap, especially when companies like Viotek and Gigabyte are putting out budget versions of 1440p ultrawides that are compelling in their own right. Yet even with the Gigabyte sitting next to me, I'm not sure I can go back to it after using BenQ's offering.

Its not perfect, for sure. To get the picture just right it took quite a bit of tweaking on my end, while others would likely just want to set it up and go. The RGB strips on the back feel like an afterthought more than just a high-quality touch. And, for many, the price is just too great.

But if you're looking for a great monitor that is worth the cost, I don't think you can go wrong with the BenQ MOBIUZ Curved Ultrawide EX3410R monitor. It's panel performs even during the most hectic of gaming moments, ensuring crisp and clear visuals with every frame. The bevy of features under the hood give a ton of value to those who love tweaking and getting their picture just right. The curvature of the monitor truly immersed me in the action, and thanks to the quality of the panel there was no ghosting to pull me out of it in the end. At 34", the monitor is in a sweet spot in terms of size: not too small to make it feel less immersive, yet not too big to make my head hurt sitting only a few feet away.

The BenQ MOBIUZ EX3410R Curved Ultrawide monitor is a fantastic monitor worth the money. If you're looking for a monitor that can perform for years to come, this is the one for you.