The BEACN USB Dynamic microphone is, without a doubt, one of the best microphones I’ve ever used at my PC. Full stop.

I could end the review there, but I guess we can explain just why that is, and why it’s the mic I can’t see myself swapping out any time soon.

What makes the BEACN Mic unique is that it’s a dynamic capsule (which are typically, but not always, reserved for XLR mics) powered by USB-C, bringing the clarity and sound quality many are looking for out of their recordings. However, the BEACN Mic isn’t just aimed at those sitting in a vocal booth recording lines, but also squarely aimed at content creators and streamers looking for a sharp-looking mic that brings the sound quality with it to their videos.

BEACN is a relatively new company, with its execs coming from GOXLR maker, TC Helicon. It’s no surprise then that the company is bringing audio bonafides here that are reflected in the quality of the products with an understanding of what streamers and creators are looking for in their kit. The BEACN Mic is a product that understands and does both, just like the BEACN Mix and Mix Create products we reviewed previously.

But first, the specs:

At first glance, the BEACN Mic isn’t huge, flashy or gaudy like other “gaming” peripherals can tend to lean. The microphone is shaped like a long pill with the dynamic capsule on one end covered by an incredibly high-quality pop filter, an RGB ring in the middle, and the aluminum enclosure at the bottom housing all the electronics inside the mic. The BEACN Mic also comes with its own assembly mount and should be compatible with most boom arms, such as the Blue Compass arm I’ve used for years now.

Visually, the BEACN Mic doesn’t look flashy, but it definitely shines in the room. As I’ve been using this mic over the past few weeks, anyone who has come into my office has immediately had their eyes drawn to it, especially my audio technician brother who spent quite a bit of time determining whether he could make this mic work on the Las Vegas Strip where he works (spoiler: yes). 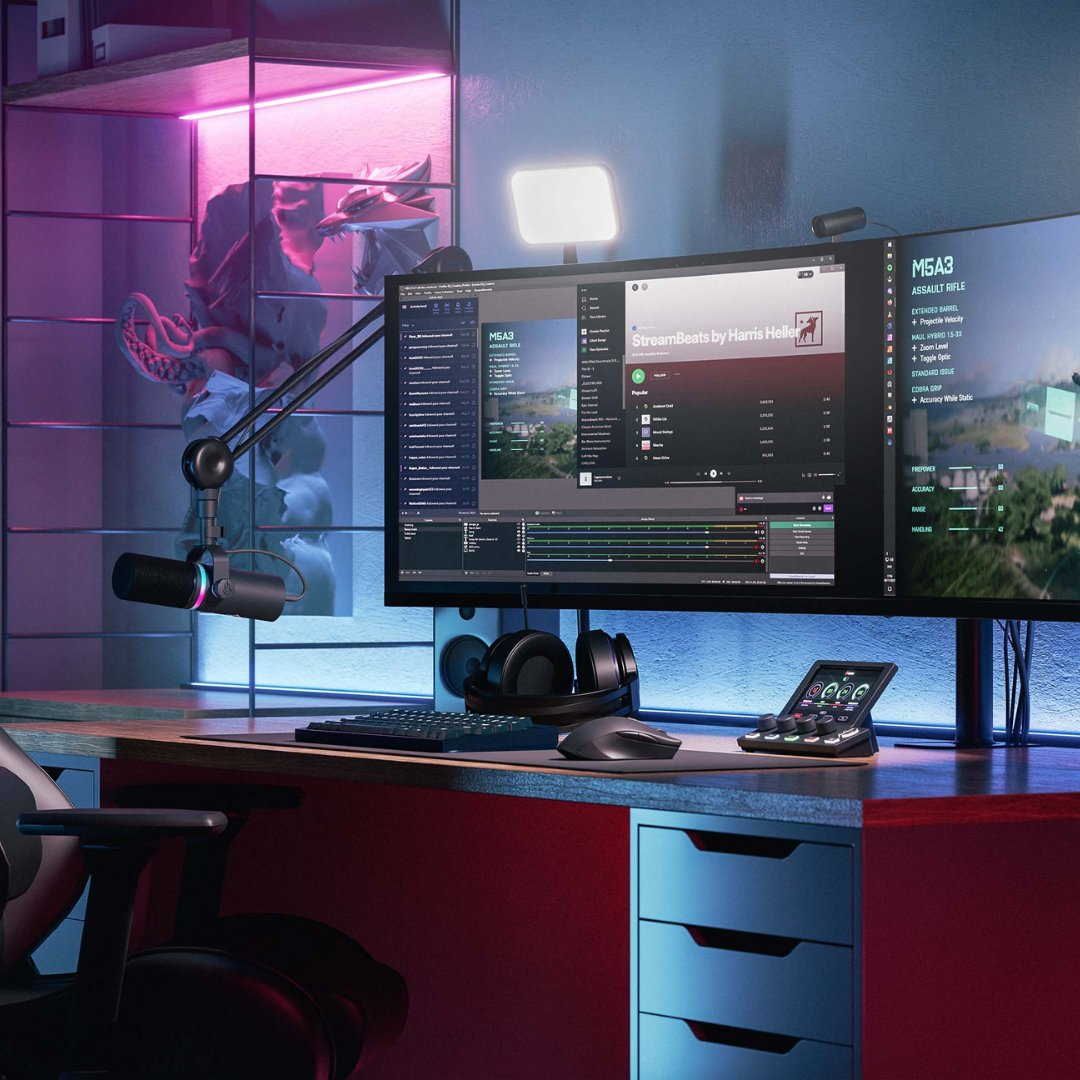 With the microphone is an outrageously long USB-C cable to connect to your PC. On the bottom of the mic capsule is also the 3.5mm headphone jack in order to monitor your voice, as well as use as an audio connection in lieu of other headphones or speakers.

What the microphone gains in style, it lacks with onboard controls. There is no analog mute button or even a gain dial - that will all have to be controlled by whatever audio software (such as BEACN’s) or app you’re using. While I do appreciate the sleek design of the mic, I really do wish there had been a gain dial for quick adjustments on the fly, instead of having to open an app to adjust my mic’s sensitivity.

Thankfully, the BEACN Mic makes up for this with what it can do under the hood. The BEACN Mic is powerful, providing crisp and clear vocals thanks to its dynamic capsule, but it doesn’t stop there. On-board the mic handles real-time noise suppression, which for streamers and gamers is ideal as the last thing you want is your surroundings - especially keyboard clacks - to bleed through to your recording or audience.

The microphone, like the Mix Create, is available in both a light (white) and dark (black) finish, letting you match your aesthetic.

The BEACN Mic, being a USB powered microphone, is quite literally plug and play. You can use this microphone without much of the software that comes with it, but in doing so you’re leaving so much on the table. What makes the BEACN Mic so powerful and so outstanding is the software bundled with the device. 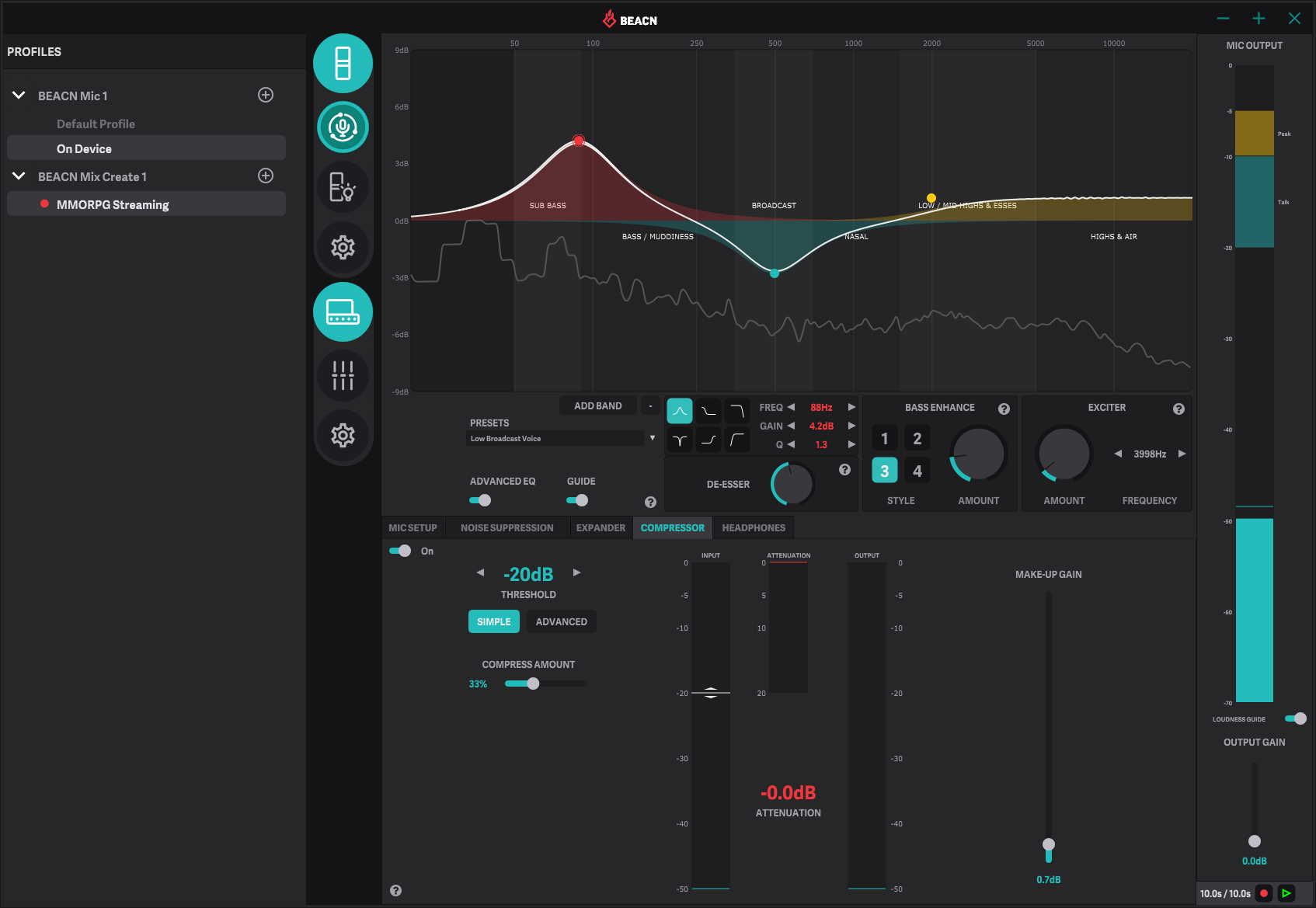 The BEACN Mic software gives users a metric tonne of control over their audio, providing everything from de-essers, exciters, and compressors to adjusting minutely the EQ of specific frequencies of your voice. Being able to adjust easily using waveforms and more the bassiness of my tone, as well as tone down the popping “S” sounds I typically make on the fly is incredibly important to me.

This is where you’ll adjust everything from your microphone gain to the headphone volume output, with everything inbetween. Finding the right balance of compression, figuring out the right gate to use on a specific frequency of your voice, and more is going to include a ton of trial and error, but once it’s set you can pretty much forget it. And if you don’t want to mess too much, BEACN has two preset EQs for you to just set and go.

However, I will admit that at first glance the software looked incredibly intimidating. BEACN sort of expects that you know a bit about audio tech going into this mic, I feel, and while it’s laid out pretty well, the software could be overwhelming for some. BEACN does have an “advanced EQ” toggle you can turn on and off if you don’t want that many options to choose from when finding your sound. They also released a pretty handy YouTube video showing exactly how to use the software for anyone who wants to get the most out of their investment.

In the above clip you can hear the microphone in action. I love the round, radio quality the dynamic capsule gives my voice here, and the noise suppression is working as advertised. During this recording I had my daughter make cereal nearby, a fan right next to me blowing into the microphone’s path, as well as mouse clicks and key strokes. Virtually none of that is heard in the recording. The great thing too about all of this is the software settings aren’t being processed by your PC CPU, but rather being handled on-board on the microphone itself, so all this EQ is being done without draining system resources.

The BEACN Mic is made better with the BEACN Mix Create as well. Remember when I said I missed that gain and volume knob? Well, thankfully I can set that up in the Mix Create software, tuning the volume on the fly again. While I would still prefer the knob on the mic itself, the work around…well…works.

The RGB light ring on the mic itself is also adjustable, and it’s a great indicator when your mic is muted, as it will change color if Windows mutes the mic (doesn’t if you mute it using the Mix Create, in Discord and what not). It’s a nice touch to have an adjustable RGB on the mic itself as well, and because it’s just a single band it doesn’t take away from the sleek look - only enhances it in my opinion. 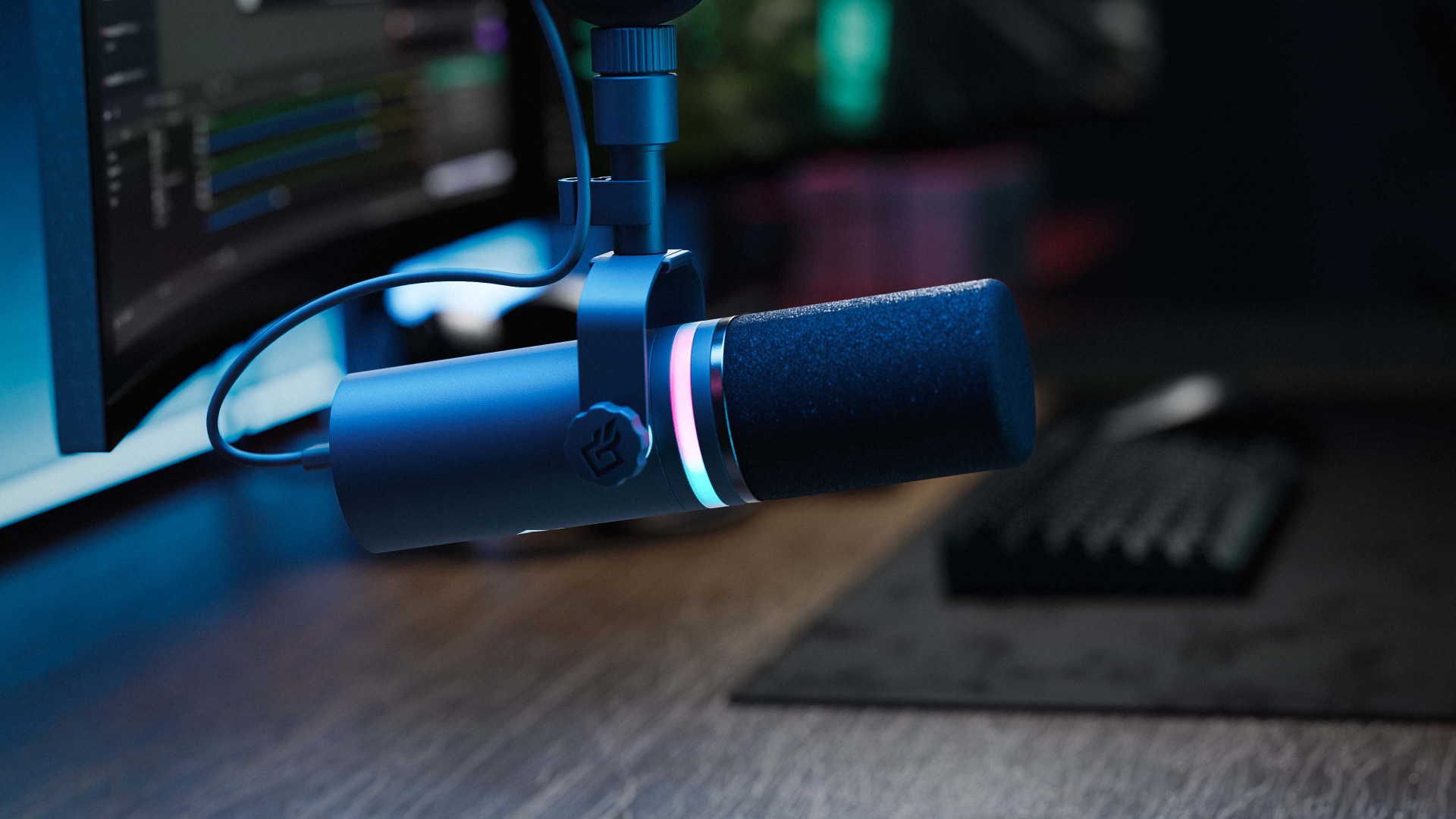 At the end of the day, like I said at the top, the BEACN Mic is the best microphone I’ve used for streams and recordings, hands down. It’s studio-grade quality rivals that of even XLR microphones on the market, and the amount of control you have over your sound thanks to the BEACN software is insane. Honestly, the software suite that BEACN has for the mic should serve as a starting point for other manufacturers moving forward for their mics at this quality level.

However, at the end of the day, the price might be what puts some people off. However, when you think about it, $279 for an outrageously high-quality dynamic microphone isn’t outrageous, especially when so many streamers and creators are opting for more expensive mics like the Shure SM7B. With those as well you’ll need to get other items, such as an XLR mixamp and more to use with your setup. The advantage of a USB-powered dynamic mic then is clear by comparison.

The BEACN Mic is truly something special, and it’s a microphone I don’t see myself putting away in favor of my Rode Podmic or even a USB condenser mic like the HyperX Quadcast, which I adore as well. With crisp, clear vocal quality out of the box that can be made even better using packaged software, the BEACN Mic is a compelling buy if you’re looking for the best mic you can to upgrade your streams. And when you consider the software will, in theory, only get better over time as the BEACN team iterates, it’s a no-brainer for me.

The BEACN Mic is the best USB powered dynamic mic, hands down.The team at BEACN have really created something special here, and I can only hope their next microphone exceeds the incredibly high bar they’ve already set with their initial offering.