If you’re looking to get into the realm of XLR mics for your streams and video creation, AVerMedia’s Live Streamer Mic 330 might be one to look at. However, does it do enough to set itself apart from the pack, especially when you put it up against similarly priced USB mics in the field?

The AVerMedia is a chonky microphone. When I first lifted it out of the box, I was astonished by the build quality. Its all metal body gives the microphone a heft I’m simply not used to, and made it feel instantly more durable and higher quality than some of the other microphones I’ve got lining my office.

I’m a real fan of the black metal finish with the red accents. The whole microphone looks sleek and solid, and the fact it comes with its own bracket to mount on a boom arm is much appreciated. The mic itself comes with a built in pop-filter meant to take the “plosive” sounds out of your voice, and the dynamic cartridge means you’ll not need to worry about powering your mic outside of simply plugging it into a mixer in the end. 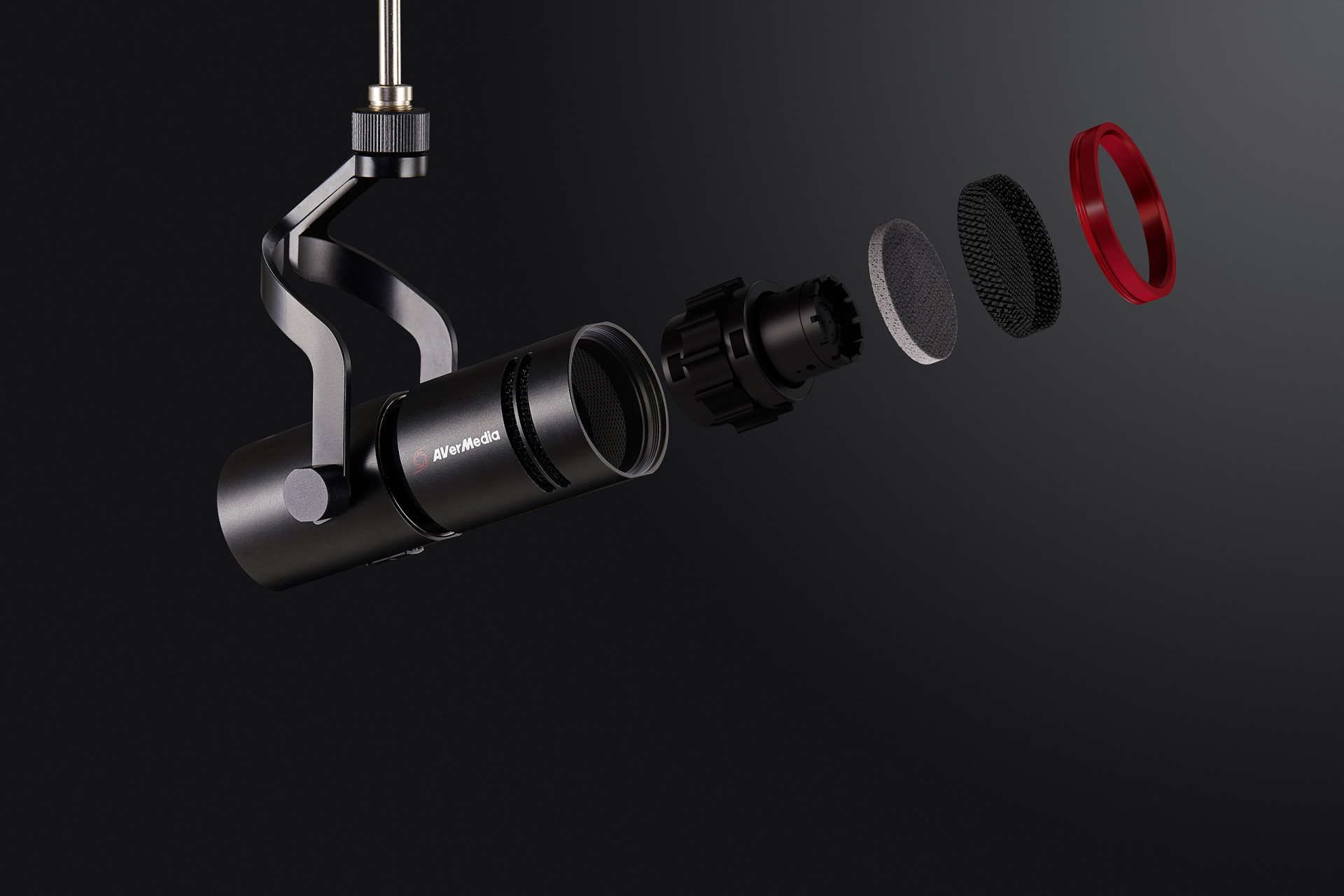 Setting up the AVerMedia Mic 330 is rather simple: the package comes with an adapter screw making it easy to attach onto a standard boom arm, like the Blue Compass arm, and the bracket which holds the mic itself rotates independently from the screw attachment, making it really easy to position exactly where you want it for the best quality sound.

One of the major indicators of good mic is clear audio and, thankfully, the Live Streamer Mic 330 provides that. My voice sounds quite clear through my headset and on streams and podcasts I’ve done in the few weeks I’ve been testing this microphone. However, because it’s a dynamic mic, you’ll need a good preamp or mixer in order to get the most out of it, and even then if can feel rather finicky.

For starters there isn’t a windscreen, so I’m constantly hearing my breath. Turning my head away from the mic in order for my breathing to not come through gets old after a while. Additionally, while the audio is crystal clear, so are the hisses on words that have an “S” and the pop filter, which is meant to dampen the “plosives” when you say words with “P” or “B” in it doesn’t seem to completely iron them out.

The lack of a shock mount as well means the microphone picks up everything, even if it doesn’t come through in the recording. You can limit some of this through a noise gate should your audio mixer have it meaning your audience won’t hear the click clack of a keyboard, or the sound of tapping or moving the mic about, it doesn’t stop everything from coming through. As much as I appreciate the freedom the mic mount has, a shock mount would go a long way towards ensuring that the mic itself doesn’t pick up every ancillary tap on the desk.

However, the ease of use (assuming you have the right equipment) is rather simple. You don’t need phantom power to drive the mic thanks to its dynamic cartridge, and AVerMedia has boosted the mids and highs in order to get your voice across in whatever you’re doing. The cardioid pattern means it’s more sensitive to what’s in front of the mic versus around it, meaning that it should have a harder time picking up background noise in your house or office (like my daughter during her Minecraft sessions with friends) and instead worry most about picking up your voice.

For those out there who love the more natural sound of condenser microphones, the dynamic Live Streamer Mic 330 might not give you the type of sound you’re looking for. I really appreciated the “radio” sound my voice got from the microphone itself, though my friends have missed the natural-sounding clarity of my USB mics like the HyperX or Blue Yeti X in my arsenal. However, despite issues with a lack of windscreen or shock mount, as well as the pop filter that doesn’t fully filter the pops, the quality of sound the Live Streamer Mic 330 gives is quite good, especially for a hundred-dollar XLR mic.

One question lingers when I think about the AVerMedia Live Streamer Mic 330, though: who is this microphone for? It’s priced as more of an entry level streamer microphone, undercutting the Shure SM7b, or even the lower priced MV7. However, while the cost savings of the microphone over some of its competition is better, the cost to get into the ecosystem, especially if you’ve not dabbled in the “pro-audio” space can be daunting.

You’ll need an XLR interface that can connect to your PC easily, which aren’t cheap, especially for a good one. This could come in the form of a preamp or a full mixer, like the GOXLR or AVerMedia’s own Live Streamer Nexus. You’ll also need a boom arm to attach the microphone too, and something like Blue’s Compass arm could run you another hundred dollars. Unless you’re looking to seriously upgrade your audio for your streams, it might not be worth the full investment of all of these extra items just to use the 330.

And then there is the fact that many similarly priced, or even just a bit more expensive, give great sound without the need for all the extra equipment. Something like the Blue Yeti has been a gold standard for podcasters and streamers for ages, especially thanks to its stellar audio quality and ease of use. 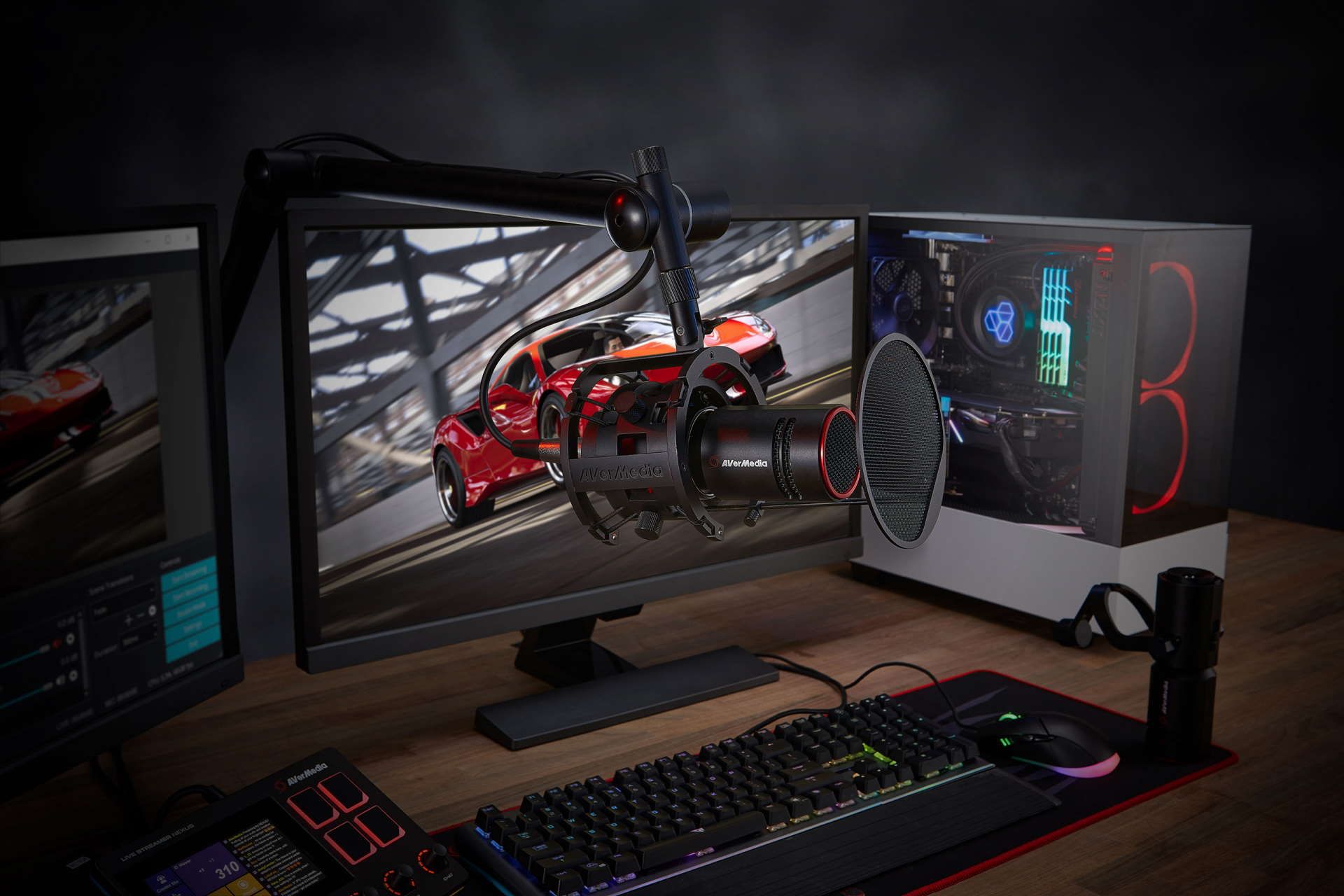 However, I can’t help but feel this is AVerMedia’s first foray into pro-style streaming audio, and with time the next iteration might have a better quality pop filter, windscreen and shock mount – all items needed to really get the most out of the Live Streamer Mic 330. And it’s interesting, because one of the promotion shots shows a windscreen and shock mount, though there doesn’t seem to be a way to buy them on the AVerMedia website just yet.

The elephant in the room also if you're looking to get in the XLR game is the Rode PodMic. At the same cost you get a microphone that doesn't have the myriad issues the Live Streamer 330 mic has. From its build quality with an internal shock mount to the a good quality pop filter, the PodMic feels like the stronger buy the same amount of money.

This leaves me at an impasse. The AVerMedia Live Streamer Mic 330 can give some great audio capture, providing clear and crisp voice overs. However, the lack of any real shock absorption as well as the lackluster pop filter impede the overall quality of the microphone. And while the audio quality is there - it does sound good when used - the annoyances far outweight the benefits, especially with a similarly priced option in both the USB and XLR space out there. The AVerMedia Live Streamer Mic 330 is a mic I want to use. I love the way it looks, and I do like the way it sounds when it's at its best. But at the end of the day, I can't recommend it over the similarly priced options.

Disclosure: The product discussed in this review was provided for evaluation purposes.