I love microphones, and so when the opportunity to review Audio-Technica's AT2020USB-X Condenser Microphone came up, I couldn't pass it up. A company known for its audio prowess has brought an improved version of its condenser mic to the fray. But does it hold up, and is it worth the $149 price tag?

The Audio-Technica AT2020USB-X is small, but it packs a powerful punch. The all-black finished metal design gives the mic some heft, though it's not overly heavy. The microphone body itself is pretty nondescript: you've got two dials on the front of the microphone (more on those later), as well as the large, touch-capacitive mute button. When powered, the cage that houses the condenser microphone itself glows with an LED light: Blue if it's unmuted, Red if muted. Otherwise, the design of the AT2020USB-X fits right in line with Audio-Technica's other line of microphones. It's not gaudy, like some gaming mics can be, instead the AT2020USB-X looks like it fits right in with a higher-end microphone designed for studio work. 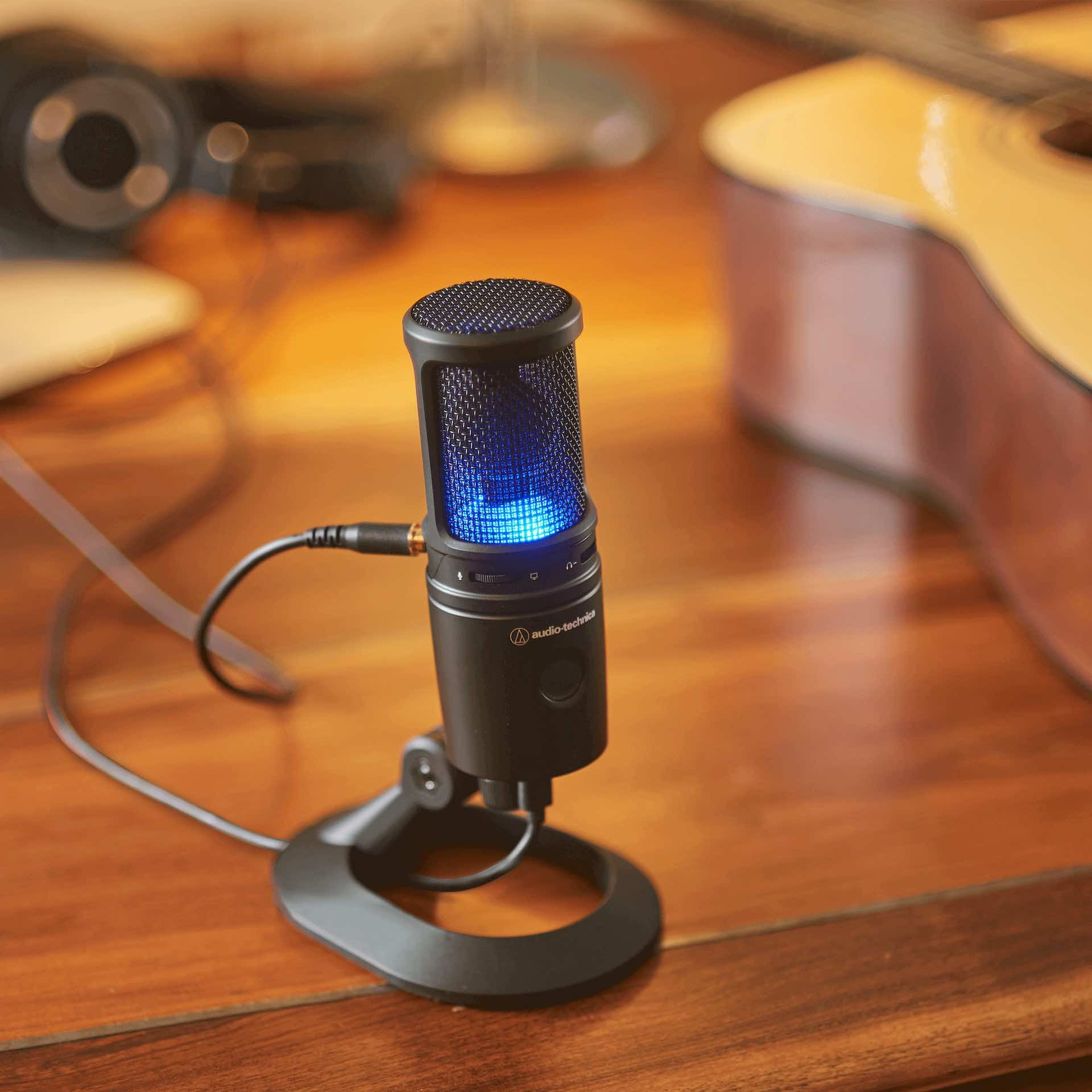 Indeed, Audio-Technica is aiming this microphone squarely at content creators, whether they be streamers, video creators, podcasters, or even musicians recording in home studios. The condenser capsule allows for some incredibly clear audio, and thanks to the nature of a condenser mic, it picks up a bit more around you than a dynamic capsule would. This could be perfect for someone using the microphone to record a guitar solo where you want all those extra frequencies the strings are putting out to be accurately picked up as they reverberate around the mic, though if you're looking to be on a video call for work it might pick up more background noise than you want.

One aspect that does help is its single polar pattern: a cardioid pattern in the front of the microphone. This will limit noise entering the capsule from behind the microphone itself, but it does limit how it can be used compared to other USB mics in the price range that offer a bevy of options. As much as I appreciate the simplicity of a single polar pattern to worry about, I wish the Audio-Technica AT2020USB-X had a polar pattern that allows for pick-up on both sides of the mic, this way it's more useful for podcasters doing an interview in person or a group of musicians recording a session together.

The Audio-Technica AT2020USB-X comes with its own stand, wich is built rather well and is pretty stable. However, I was mostly afraid of keyboard noise being easily picked up if the microphone was sitting next to it on my desk. Thankfully, the AT2020USB-X is also compatible with most boom arms, with the AT microphone easily fitting on both my Elgato arm and the Blue Compass arm.

One major thing to note as well is there is no gain adjustment on the microphone itself. Instead, the two dials on the front of the AT2020USB-X are a monitor mix as well as a headphone volume adjustment. The headphone jack in the back of the microphone allows you to monitor your voice as well as use it as an audio source from your PC. This is handy, especially as I have a tendency to yell when talking in a mic when I'm wearing headphones. Being able to hear myself, latency-free, is a normal feature on most microphones nowadays, however being able to directly control the mix on the fly is nice as well.

How Does The Audio-Technica AT2020USB-X Sound?

However, because there is no gain dial on the microphone, it's incredibly reliant on your settings in Windows, MacOS or if you're using a mixing board. As such, the AT2020USB-X can be a bit too sensitive for some settings. As a condenser mic, it's naturally just going to pick up more than a more focused dynamic microphone. As a result, the Audio-Technica microphone might pick up unwanted sounds around you if you're in a common area, or just a generally echoey room.

Thanks to the fact that I was using the BEACN Mix Create, I could somewhat limit this on my end, but we did a microphone recording without any mixing to showcase the out-of-the-box sound. I love how this mic makes my voice sound: natural, yet it booms a bit in the bass, something I'm always looking for when choosing a microphone. Surprisingly, with my setup being in a large room, with a concrete floor, the background noise wasn't as bad as I thought it would be when I sat down to record this. The extra sensitivity of the AT2020USB-X helped as well on Discord calls where I am often told my dynamic microphones could be a smidge too quiet at times.

Here is a recording of the Audio-Technica AT2020USB-X to hear for yourself. This was right out of the box, no adjustments made using the mixer or any VSTs on the voice. I was generally surprised at how well the microphone filtered out some background noise, but not all. It's pretty sensitive, with the capsule being a few feet away from my face, yet still picking me up as if I'm right up on it like a dynamic microphone. I do love that about condenser mics, and was happy to just record without having to worry about the most optimal microphone placement next to my mouth.

I do wish that I was able to adjust the gain on the fly, and during gaming sessions, the Glorious Gaming GMMK Pro keyboard I use was heard clear as day without much way to mitigate that. Even when suspended from the boom arm, the mic's sensitivity was enough to pick up ambient clicks, typing and even some fan noise from my PC, something my Dynamic mics all but eliminate when in use. Thankfully, muting the AT2020USB-X is as simple as tapping the capacitive mute button on the front. Though, at times, I would miss it when I would try to mute quickly, making me wish the button was a little larger, or even on the top of the mic like the HyperX Quadcast's mute button.

Is the Audio-Technica AT2020USB-X Microphone Worth Getting?

At the end of the day, is the Audio-Technica AT2020USB-X worth its price tag? I would say yes, as it's a stellar-sounding microphone that is easy to set up and use: you just plug it in and go. It doesn't require any secondary software to tune the microphone, nor does it require anything more than an extra USB port on your PC to power. Unlike an XLR microphone, you don't need a sound mixer or complicated mixamp to use the AT2020USB-X. 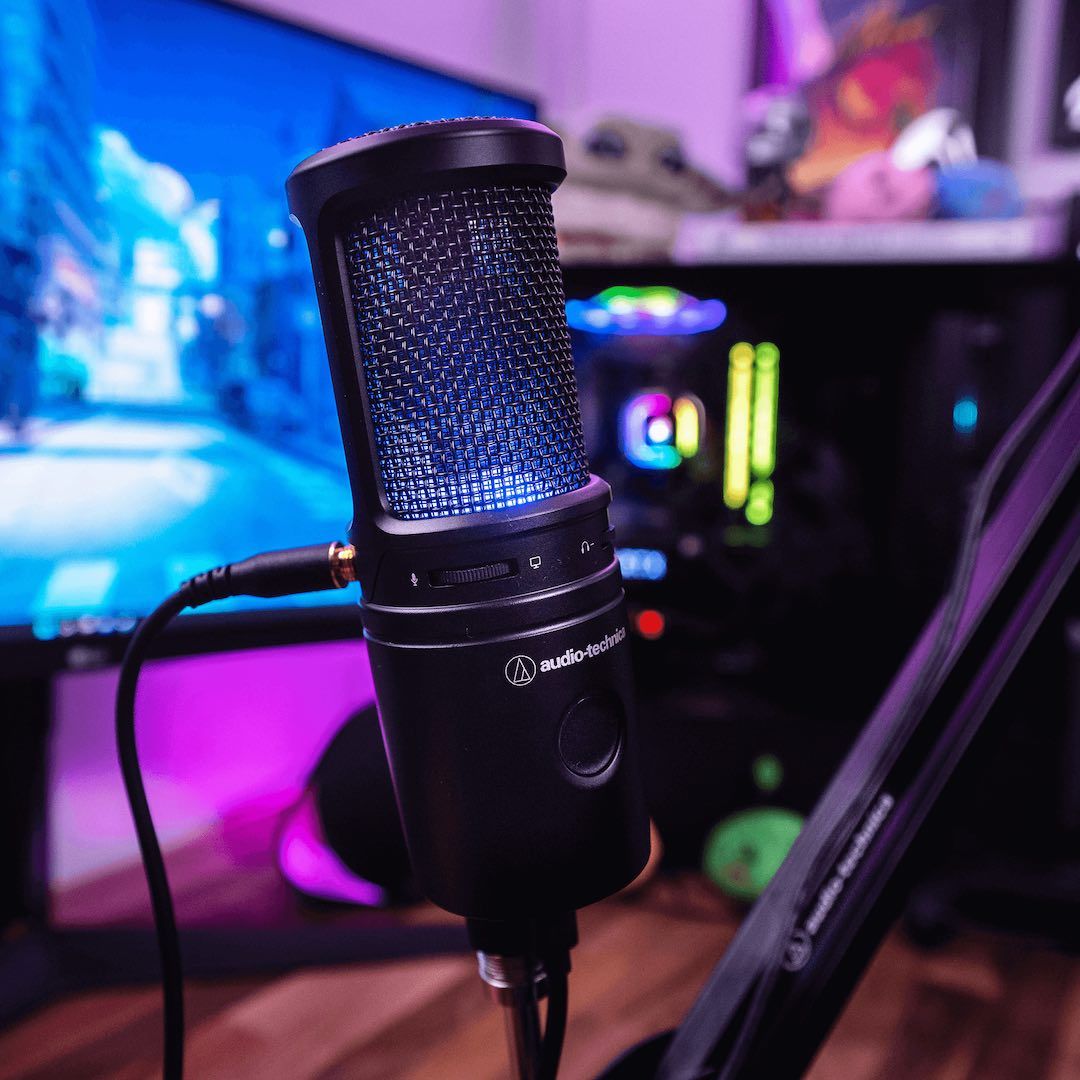 However, that's also a double-edged sword for the AT2020USB-X. While it doesn't require software to run, this also means there aren't any presets or way to adjust your sound without a mixamp or mixing software. Without a gain dial, you're incredibly application dependent on whether your mic is way too loud or too soft for the scenario. Having to manually adjust my microphone gain inside of Discord, but have it separate from Microsoft Teams while in an interview during our review period was a bit annoying, especially when the competition like the HyperX or Blue Yeti X allow for this fine-tuning right on the mic itself, on the fly.

However, I do believe I prefer the sound of my voice in the Audio-Technica AT2020USB-X compared to the Blue Yeti X or HyperX, my two main go-to condenser microphones. But again, those have a bit more modularity, thanks to supporting more polar patterns, as well as software to add VSTs to your voice output. While that is possible with the right software on the Audio-Technica, it's not nearly as clear cut as the competition in the price range.

However, if you're someone who just wants to plug in and go and are looking for an incredibly high-quality sounding microphone, you won't go wrong with the Audio-Technica AT2020USB-X microphone. It's simple to use, it sounds great, and is compatible with its own stand or a standard boom arm. It's definitely worth looking at if you're a creator interested in high-quality audio for whatever you're doing.

Full Disclosure: The product discussed here was provided by PR for the purposes of this review.