WiFi routers have come a long way from the days of 802.11b. With WiFi-6 on the horizon, coupled with the influx of whole home coverage through Mesh WiFi systems, ASUS has thrown their unassuming, yet powerful tri-band, ZenWiFi AX6600 XT8 into the ring. Will the cost to upgrade from your older, yet still reliable, wireless router be worth it, or is WiFi-6 not ready for prime time?

With the influx of WiFi-6 routers hitting the market, it’s easy to question whether upgrading to the new standard would actually be worth the cost. The ASUS ZenWiFi AX6600 packs a lot into these little boxes. Here are the specs. 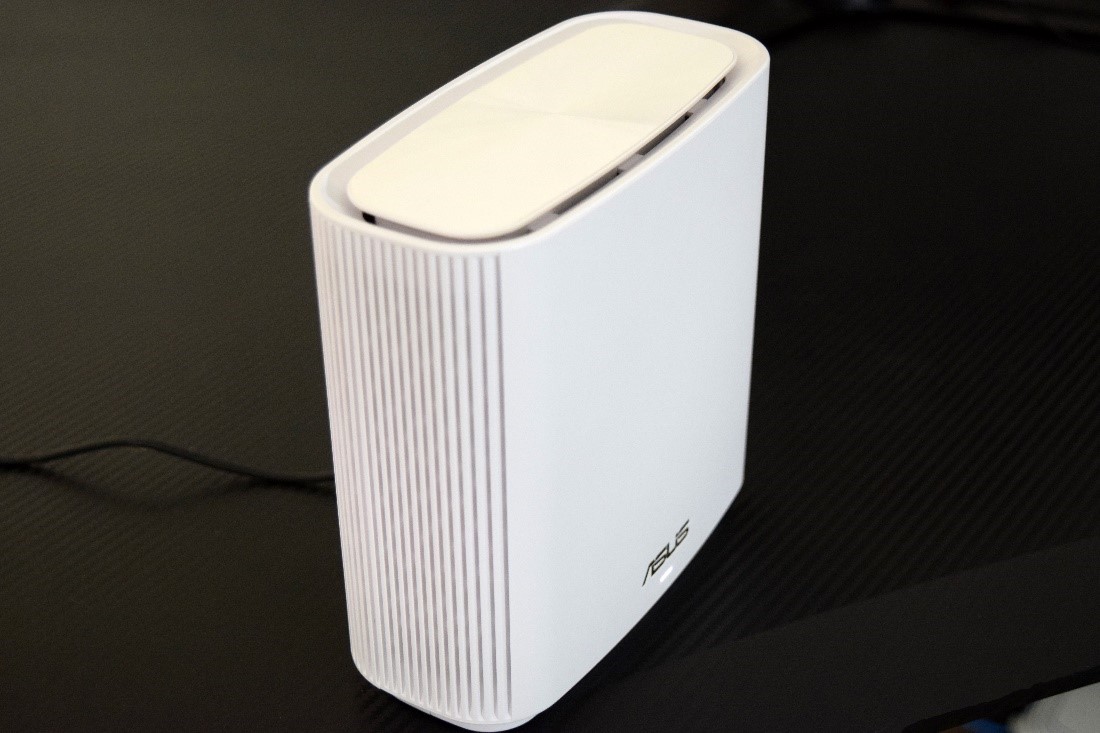 Aside from the specs, the ASUS AX6600 comes with a long laundry list of features, from a traffic analyzer and VPN, to parental controls, many features which the average home user probably won’t even touch. When it comes to gaming specifically, gamers are looking for two main things, speed, and reliability. Before we get into the nitty gritty of our testing, it’s important to frame the ASUS AX6600 for what it is, a whole home, wireless mesh system, that would generally be fit for large homes or areas where the layouts are conducive to dead zones. The features are plentiful and robust, but the system as a whole may price out gamers who are looking for routers that are less feature rich or for smaller spaces.

As wireless these days usually comes as a feature of the modems supplied by service providers, more often than not, modem wireless is finicky and cumbersome to customize. Many users also don’t get newer modems, which means, while their hardwired connection speed may still be pretty good, they aren’t benefitting from the newest technologies and WPA3 encryption, which the ASUS ZenWifi AX does have. In addition, a new trend of providing whole home wireless through “Mesh Wireless” systems have become much more common over the past several years. Mesh routers are meant to rebroadcast your wireless signal utilizing satellite routers, which is intended to eliminate WiFi dead zones. The ASUS AX6600 features ASUS’s AiMesh, which essentially connects the AX’s satellites, and can even broaden your network using your existing ASUS WiFi routers. You will also notice that either of the two ASUS ZenWifi AX routers can be utilized as the primary router, so there is no confusion on whether you are using the right one when you begin your setup. 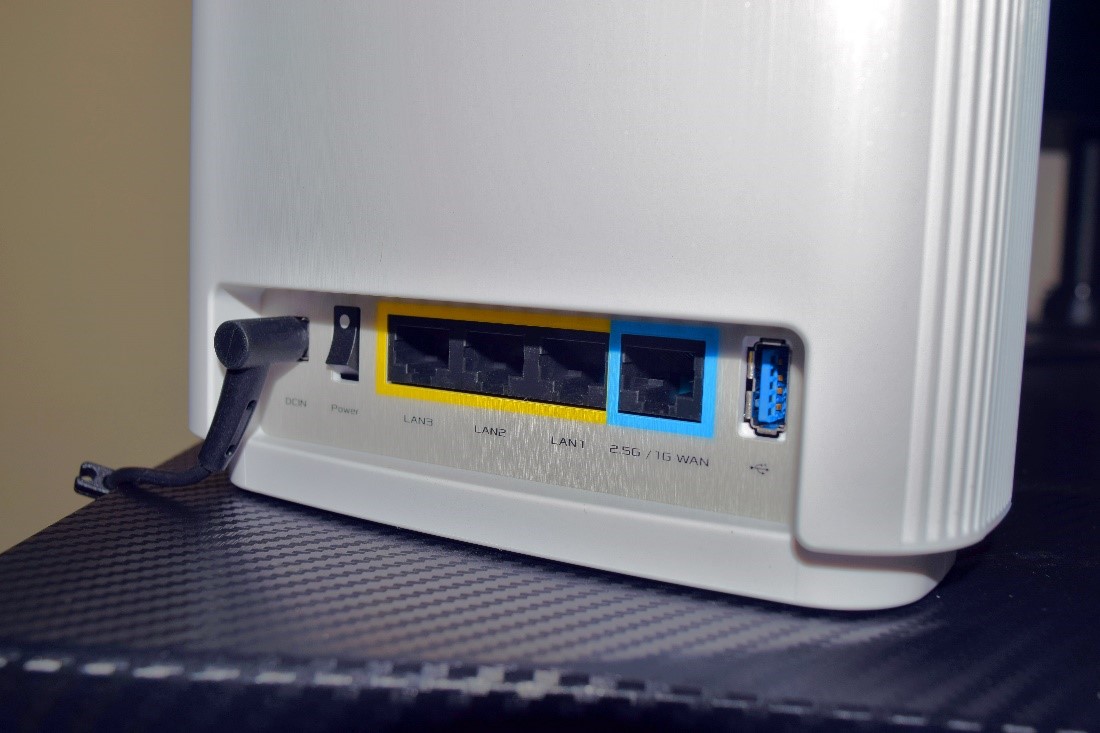 Setup was fairly simplistic. ASUS requests that you download an app to connect to your ZenWifi AX6600 routers. Once you turn them both on, and install the app on your phone, connecting to them and following the on-screen guide to create and secure your network is a breeze. I was up and running with little issue within 10 minutes. Shortly thereafter, you can navigate in the app and see not just both your routers, but the devices you have connected to your network. It will also request you to update the firmware, which is highly suggested. In fact, speeds seemed much more consistent after the firmware update than before it.

It’s important to note that placement of both routers may be the quintessential difference between exceptional network performance, and mediocre performance. All testing was conducted in a 2300 square foot, two-story area. There is an accompanied layout with the performance provided in each room. After toying around with the best places to put each router, and running several speed tests, it became apparent that there is no “magic bullet” when it comes to WiFi, even of the mesh variety.

At best, I was able to achieve near the top of what I’ve seen my wireless capable of at 550 Mbps, and what was interesting in my testing is that sometimes the fastest maximum speeds I saw weren’t when I was the closest to the router. I was able to achieve internal network performance at as close to the best wireless that I have available. At the farthest room from my house with a floor and several walls in the way that the signal needed to penetrate, my slowest speeds still garnered 40 Mbps. Seeing as how my testing hardware only utilizes WiFi-5, the results have been impressive when compared to the Linksys EA8500 and the Pace 5268 that these were tested against.  By comparison, it was rare for me to ever top 100Mbps in the furthest room of the house downstairs with the Linksys. Now, speeds top 300 Mbps at times using the AX XT8. This generally outlines where consumers will see the major boosts between WiFi-5 and WiFi-6. One issue I did experience, however, was temporary disconnections when moving between areas. Once established in a room, connections seemed to increase in speed over time.

Simply speaking, most households, gamers included, won’t have the hardware in their hands today to utilize WiFi-6 to its full potential. That isn’t to say that there aren’t significant performance boosts related to upgrading. The ASUS ZenWiFi AX will surely future proof your network, at least for several years with a WAN port capable of both 1Gbps and 2.5Gbps, but those with heavy network use will see the biggest performance increases. As this is a tri-band router, wireless backhaul will assist in offloading traffic to the second 5Ghz signal, which means that the connection can take on a dozen devices without seeing performance degradation. Generally, though, the Wireless backhaul is not utilized for regular traffic, but could be utilized if you wanted to set it up that way. In fact, testing of the wireless backhaul proved quite effective in my preliminary speed tests, often clocking at near the top of what my device and internet were capable of. Equally, the integrated USB 3.1 server was fairly robust with its transfer speeds, considering the USB 3.0 drive utilized for testing was only a 5400 RPM drive, there is certainly room for improvement with a faster external USB device. 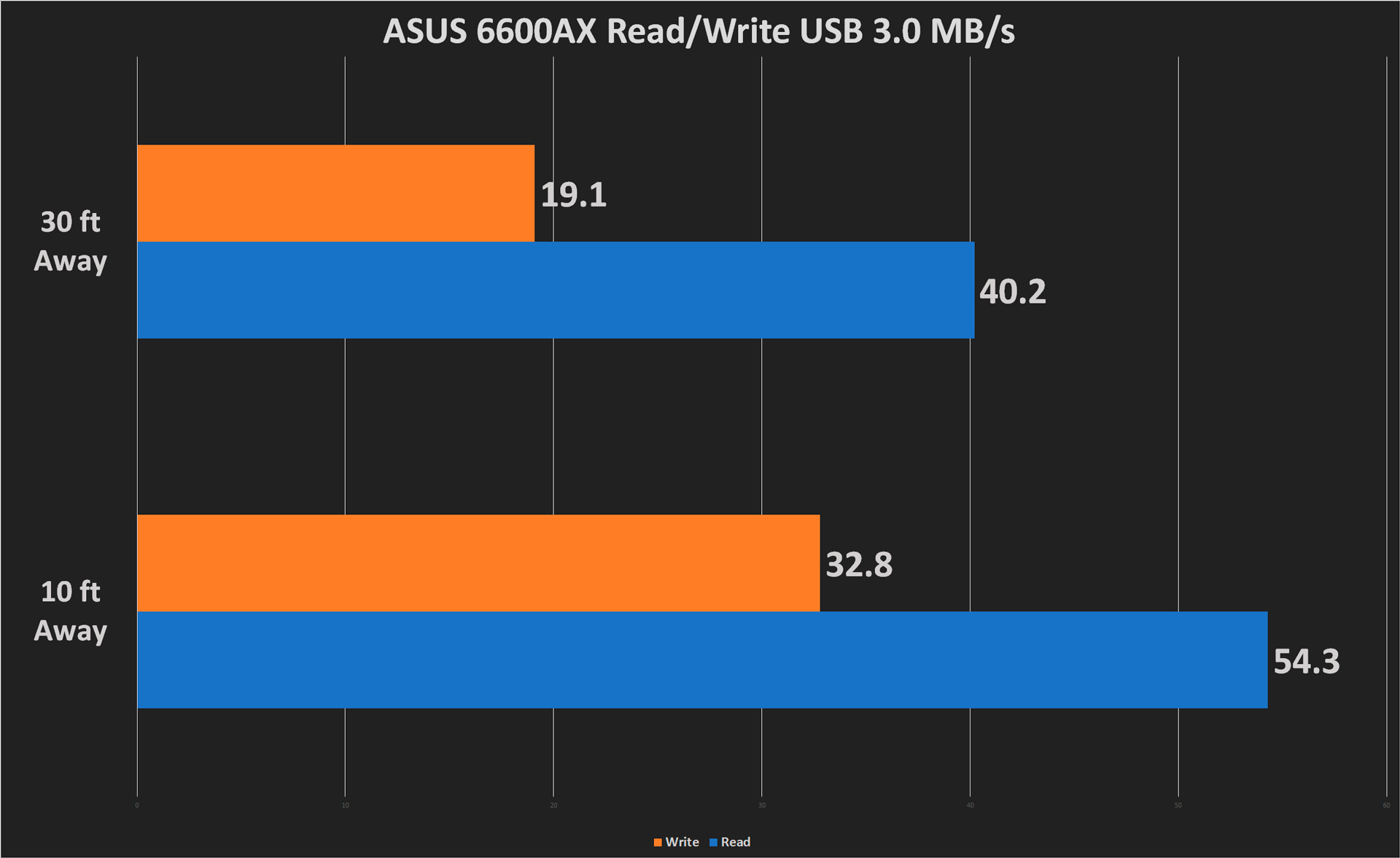 Where gamers will see their biggest performance boosts, will be in the multi-verse of devices, and lack of throughput issues. While MIMO testing often doesn’t depict the type of usage each device will go through, I did see small drops in speed and increases in latency with my MIMO testing. That being said though, the testing was only about a 20% drop when running two devices through standard speed testing on the ASUS ZenWiFi AX in comparison to the Linksys EA8500 which dropped nearly 50% between the two devices. When it comes to actual gameplay, I utilized Shadow Clouds game streaming platform to test latency, packet loss and bandwidth utilization. 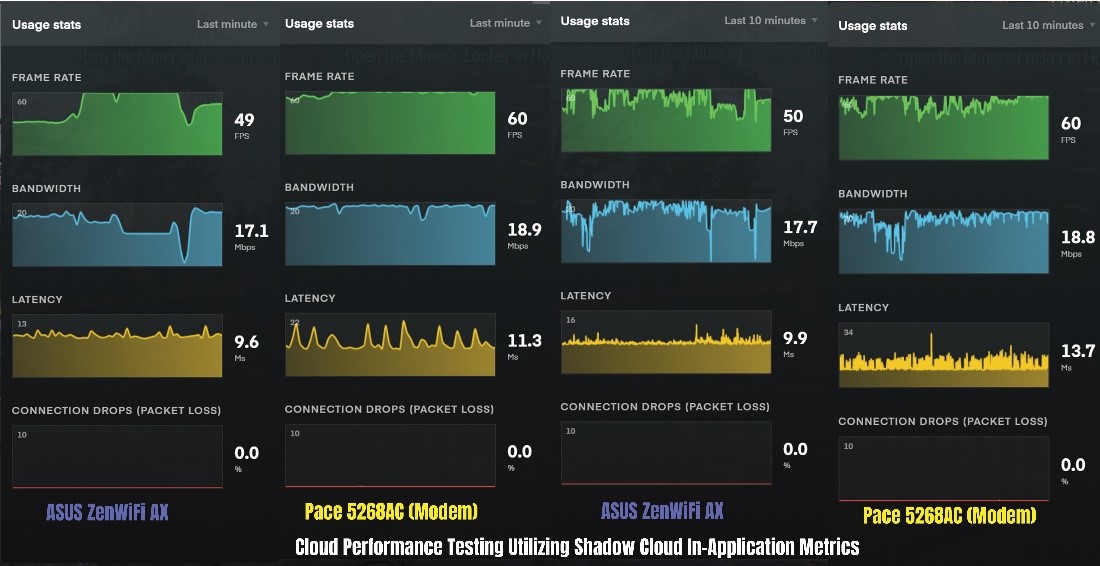 While the ZenWiFi AX didn’t completely eliminate lag, after an hour of usage, latency and dropped packet spikes were far fewer than utilizing the modem WiFi from my ISP or the Linksys. In fact, when you take a closer look at the traffic between the modem WiFi and the ZenWiFi AX, you can see how different the latency appears. The modem would consistently peak and valley, sometimes getting into the high 50 and 60ms range, while the ZenWiFi AX had much lower and consistent latency. Playing between the various WiFi networks was a noticeable difference. Lag, stuttering, and visual hitches consistently plagued the Pace modem, making it near impossible to play at times.

Most users, after installing their wireless system, generally forget it unless they run into an issue later on down the line. ASUS gets the consumer involved front and center with the ASUS Router app that is the easiest way to get your router up and running quickly.  The app isn’t the only way that users can get connected to their ASUS ZenWiFi AX. Heading over to the default gateway will take you into an interface that isn’t entirely unfamiliar than the app on your phone, but with many more bells and whistles that would have been quite helpful to have on a handheld app.  For gamers specifically, the QOS setting, which is off by default, is available in the phone app. Turning this on will let you prioritize the traffic in your network, such as, gaming first, media streaming second, and so on.

The network analysis and in-depth testing are all situated in the Advanced Settings, as are some significant settings like Alexa integration, enabling DoS protection, the VPN, and getting more details about how exactly the wireless is setup. A good example of this is if you want the system as a whole to run in AiMesh mode, or if you want separate wireless networks. You may want to change the way your wireless bands work, such as dropping connections with poor signal strength on the main 5Ghz band, but allowing signals of –80+ dBm to stay on the 2.4Ghz.  While it does make sense that some of the more advanced settings, like disabling implicit and explicit beamforming are hidden, it seems strange that some of the settings that could be popular, like in-depth testing and Alexa, aren’t easily accessible in the phone apps. 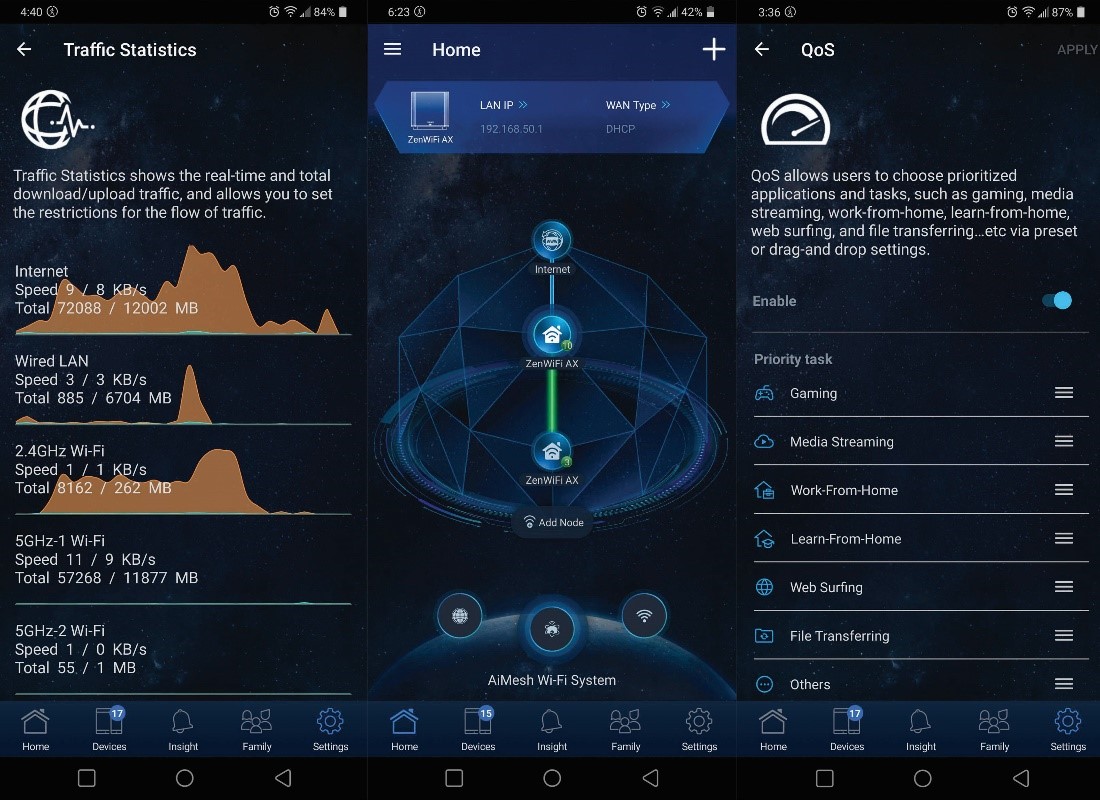 What is great about the ASUS Router app is that it’s exceptionally easy to see what is connected, and where your network performance is at without having to fiddle around in too many menus. On the main screen you can see which routers are available, how many devices are connected to each router, you can tap to see real-time statistics and the icon on the bottom will take you to other areas that could be quite useful, such as the Security Insight statistics. The Security Insight feature assesses and blocks malicious attacks, and reports them to you in layman's terms so that anyone can understand what is happening, which device may have experienced an issue, and how concerning it potentially is.

The ASUS ZenWifi AX 6600 is a worthy upgrade that walks the line between making the most of what you have now on your network, and looking ahead to what consumers will see hitting the market over the next few years. With the ease of setup, upgraded security, and the range capability to handle most large homes, there are several valid reasons for those looking for an upgrade. At 449.99 for the ASUS ZenWiFi AX (XT8), it isn’t the most expensive WiFi-6 router on the market, but it certainly isn’t the cheapest. That being said, when you get into the Mesh Wi-Fi spectrum, the ZenWiFi AX has probably the best price to performance experience you’re bound to find out there today.

The product described in this article was provided by the manufacturer for the purpose of review.
8.5Great
Pros
Cons
Tags
Networking
Routers