ASUS and its Republic of Gamers want to break the mold for gaming headsets. The ROG Fusion II 500 brings audiophile-tier sound quality to a stylish, customizable design that’s made the brand’s previous headsets such popular choices. Featuring four high-quality DACs, built-in surround sound, beamforming microphones, and an internal design that puts sound quality at the forefront, this $179 aims to appeal to gamers and audio enthusiasts alike.

The ASUS ROG Fusion II 500 takes what the ROG Delta line-up started and runs with it. In fact, I would go so far as to say these are sister headsets. But where the Delta S Animate (which I reviewed here) leans more toward core audiophiles with its support for MQA — Tidal’s Master Quality Authenticated tracks — the Fusion II 500 takes most of the features, drops MQA and the animated earcups, and cuts $70 off the price tag. It’s a solid approach if you care about sound quality and don’t care about streaming from Tidal or having an LED matrix on your ears.

The Fusion, in my opinion, is also a much nicer-looking headset, opting for simpler oval cups, instead of the D-shaped ones on the Delta, and tasteful RGB for a bit of extra flair. The design is largely matte black with the RGB hidden on the rear edge of the cup in three curved strips per ear. This isn’t RGB you’ll see on a stream, so it’s purely for your own enjoyment. The logos on each ear are minimalistically printed in matte silver. There’s also a bit of chrome-like plastic flanking either side of the padded headband. 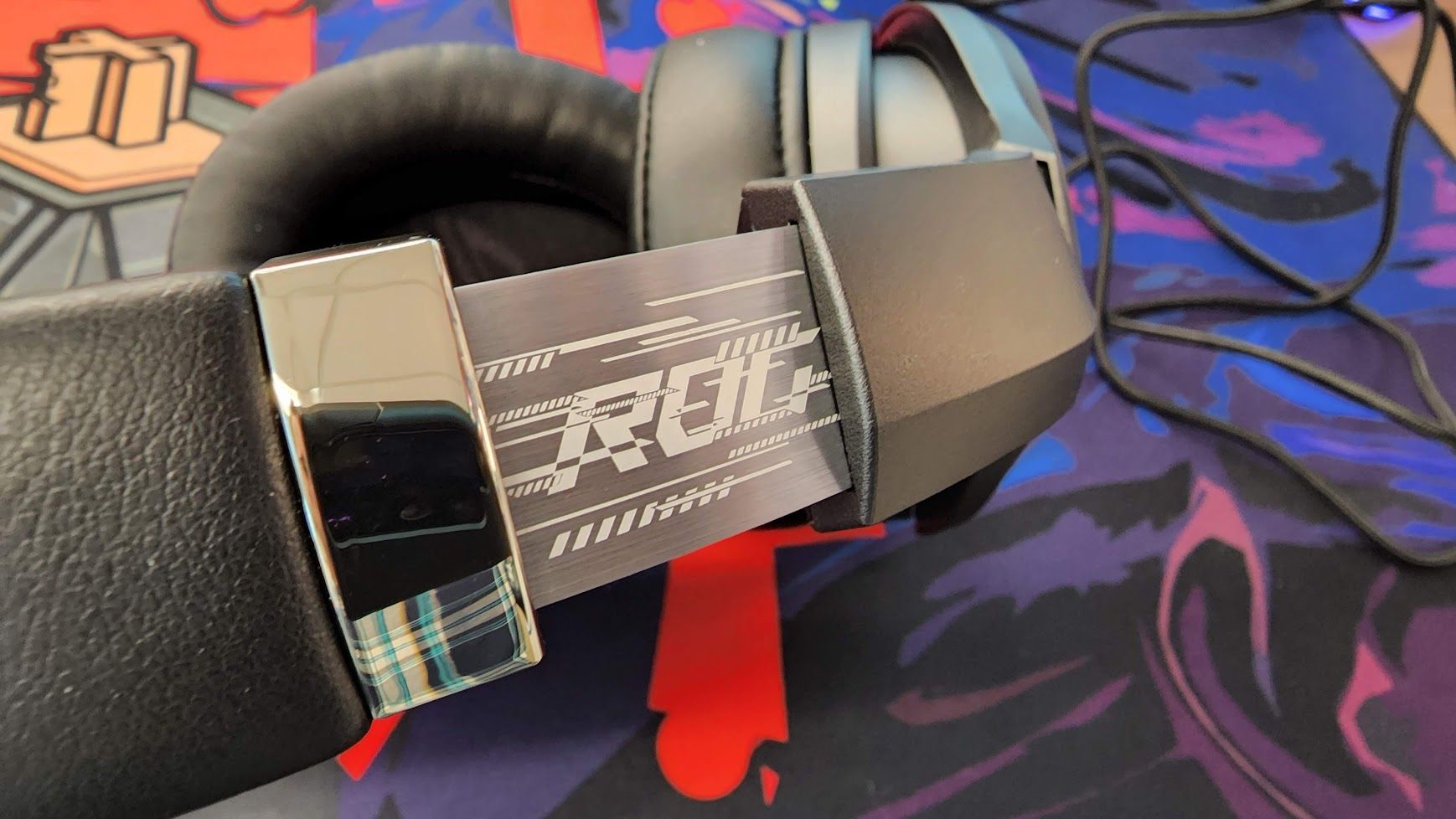 Expand it and you’ll find a bit of an easter egg. The headband is made of metal for added durability, but embossed on each surface is the cybernetic ROG logo. I have to say, you pay a premium for ROG products, but they do wind up looking and feeling much more premium than most competing headsets.

Notably absent is any kind of microphone — at least to the naked eye. Instead, the microphone uses a pair of beamforming microphones built into each earcup. These microphones create a zone of pickup in front of your mouth and reject outside noise. This is enhanced through ASUS’s AI noise cancellation tech and works remarkably well, if a bit aggressively. These microphones are both more clear and less muffled than other in-cup mics I’ve tested and do a much better job at filtering background noise. At the same time, you do lose some clarity and volume compared to a traditional boom microphone and the noise cancelation leaves you sounding slightly compressed. The mic would be a perfect fit for chatting with friends over Discord (and is, in fact, Discord Certified) but I wouldn’t use it to hop on a stream.

Under the hood, the Fusion II 500 features four separate DACs. These chips turn the digital audio from your computer into an analog output that can be played through the speakers in the headphone. Typically, this job can be handled by a single DAC, but the quad-array has been integrated to break the frequency spectrum into lows, mids, highs, and ultra-highs. Whether this makes a huge difference is debatable, but it’s certainly not a bad thing and points toward the sound quality-first approach ASUS has taken here. 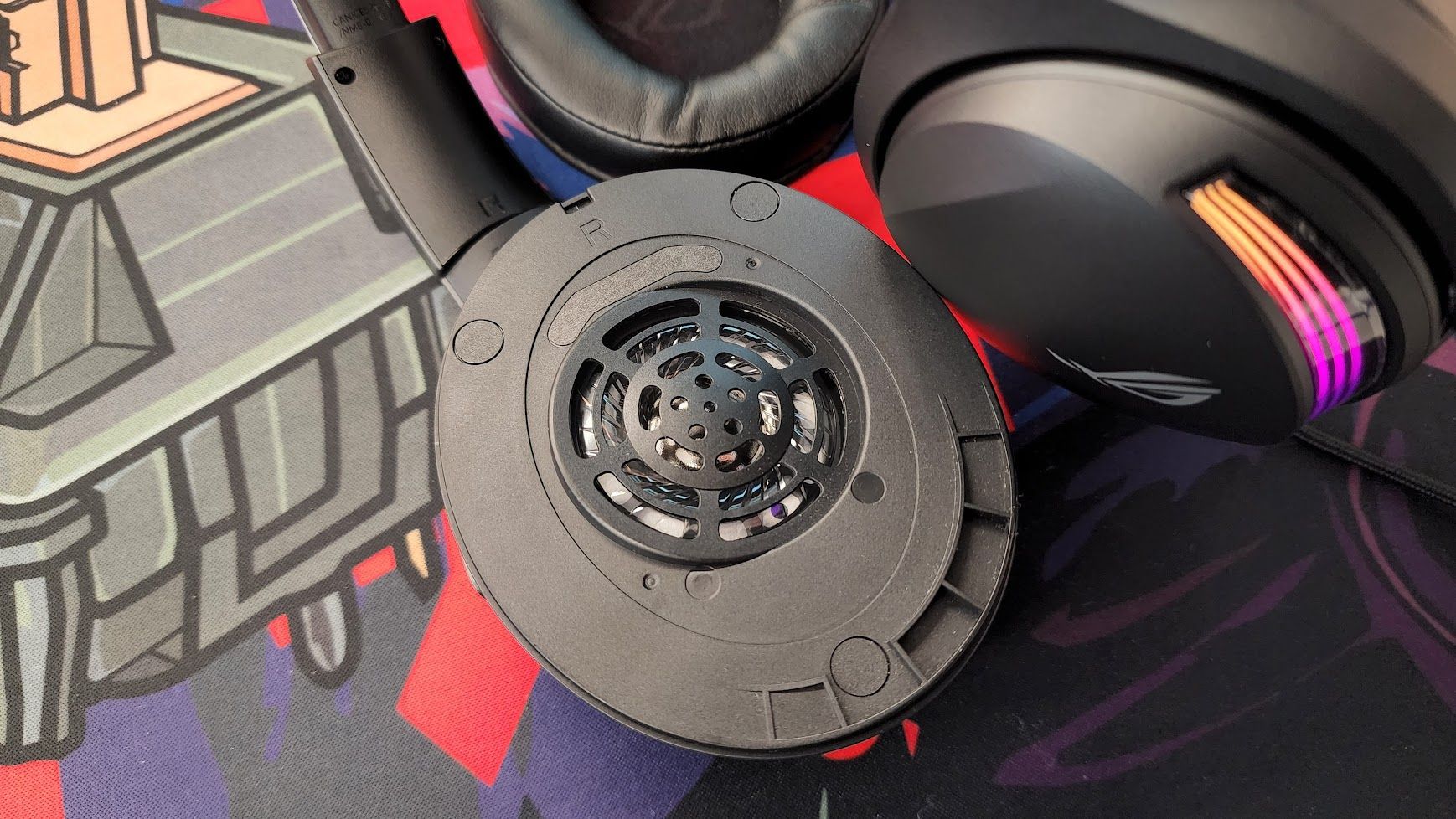 This is enhanced further when you dig deeper into the design. The headphones use huge, 50mm high-resolution drivers. These “essence” drivers feature a frequency response range of 20Hz - 40kHz, pushing any distortion outside the range of human hearing. The chamber it’s kept in has been widened and made airtight to increase clarity, detail, and soundstage. The out of box tuning puts gaming first — there’s a definitely low-end thrust with these — but custom EQs can be applied to tune it to your personal taste.

The Fusion 500 II boasts expansive multi-platform support: PC, Xbox, PlayStation, Nintendo Switch, iPad, and so on. Much of this is due to the fact that the headset supports both USB and 3.5mm connections. To connect to PC or console, you’ll want to use the USB cable (Type-C to Type-C with an included Type-C to Type-A adapter) to achieve full functionality. Engaging the built-in DACs, enabling RGB, and using any of the included controls requires power. Over 3.5mm, even volume won’t be accessible. Though I’m happy to see both cables included (dual support is great for added versatility), I would have preferred to see a longer USB cable included. Unless you’re sitting right next to your console, you’ll likely be stuck plugging into your controller with the 3.5mm connection. 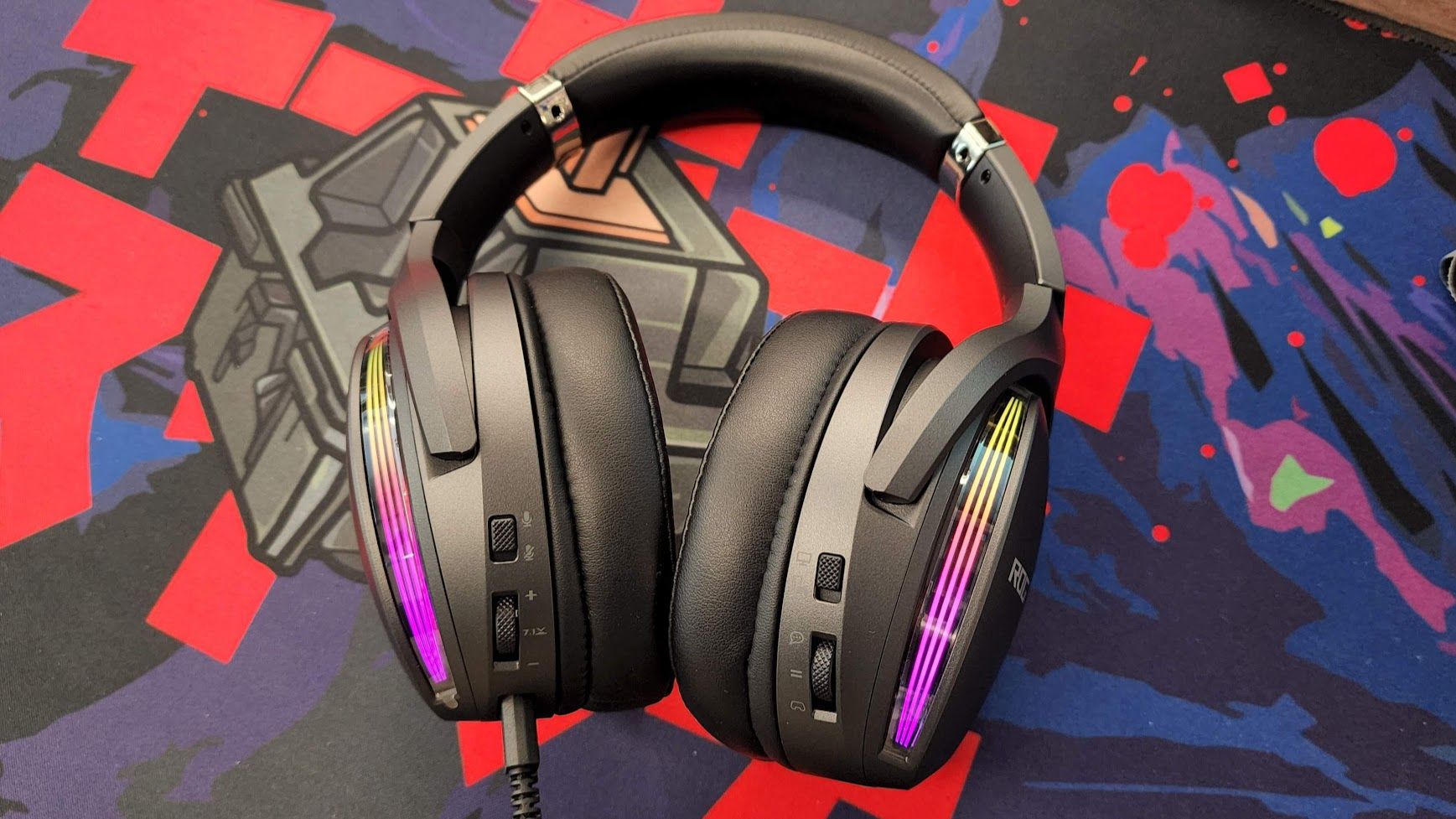 Plugging in over USB gives you access to the headset’s plentiful controls. The left earcup has a microphone mute toggle and a clickable volume wheel that enables 7.1 surround sound (even without software!). The right earcup has a switch to toggle between PC and console mode and to adjust game/chat sound balance. You can tell that extra consideration went into the two wheels as well. The volume roller is notched to easily feel each step you’re adjusting. The game/chat balance is smooth but features a notch right in the middle when both channels are balanced. It’s smart design. 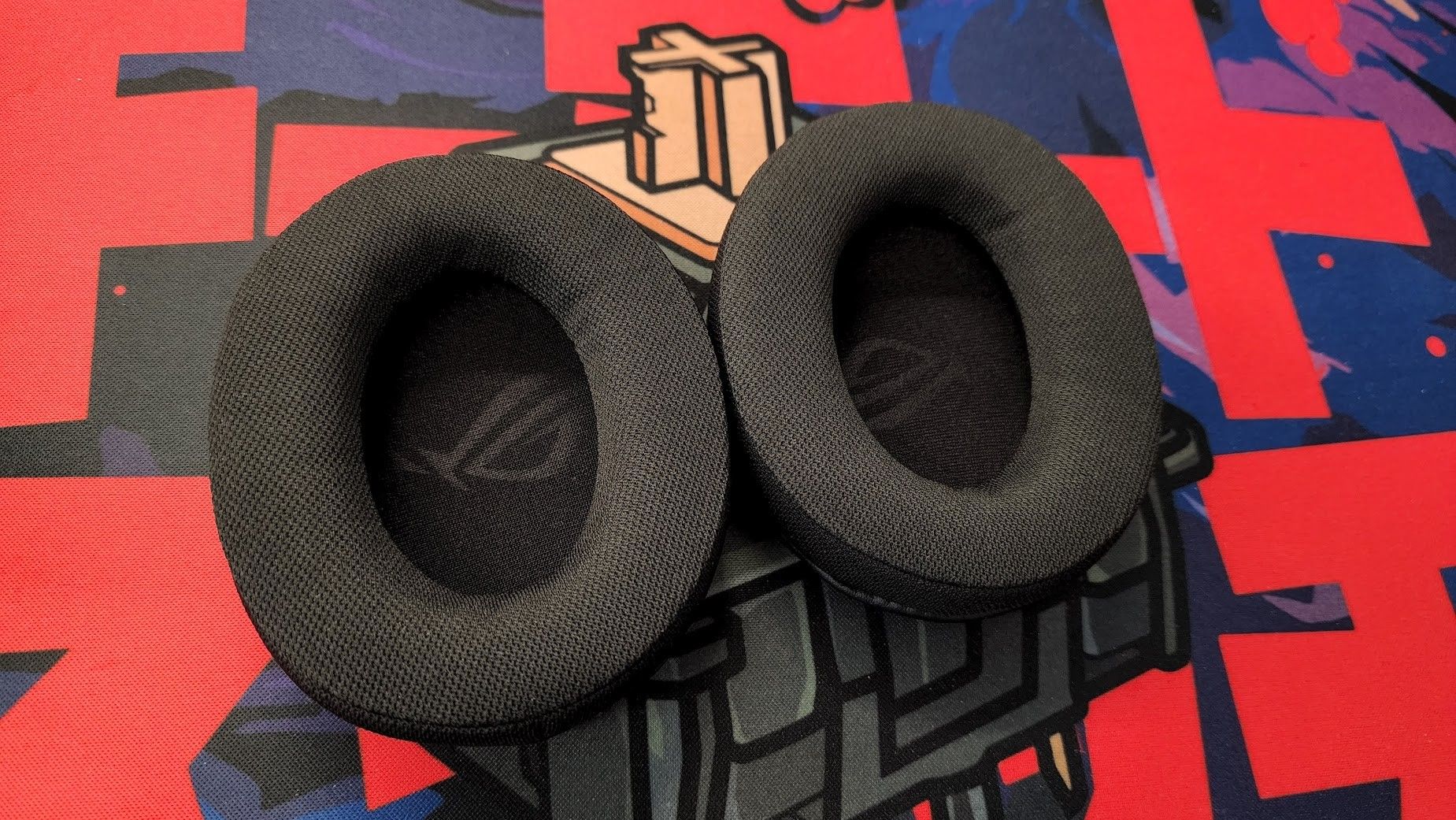 Also included in the box is a pair of alternate cushions for the ear cups. Stock, the Fusion 500 II comes with leatherette pads installed. These are better for isolation and bass performance but can develop heat over time. The alternate set are fabric cushions and are much more breathable. These pads do let in (and out) more outside noise but are a better fit for warmer environments where you might be prone to sweat.

The ASUS ROG Fusion II 500 is a great gaming headset, no question about it. The sound is big, bold, and boomy when it needs to be, but doesn’t lack detail to accurately hear what’s going on around you. I was able to pick out enemies in my surrounding just by hearing their footsteps before being able to see them on my screen.

I particularly liked the fact that I didn’t need to open the software to turn the 7.1 surround sound on or off. It’s not a feature I use often, but the application here is more subtle than most and doesn’t soak the soundscape in reverb. Instead, it brings the overall volume down and widens the soundstage to give a better impression of space. It’s one of the better implementations I’ve heard. 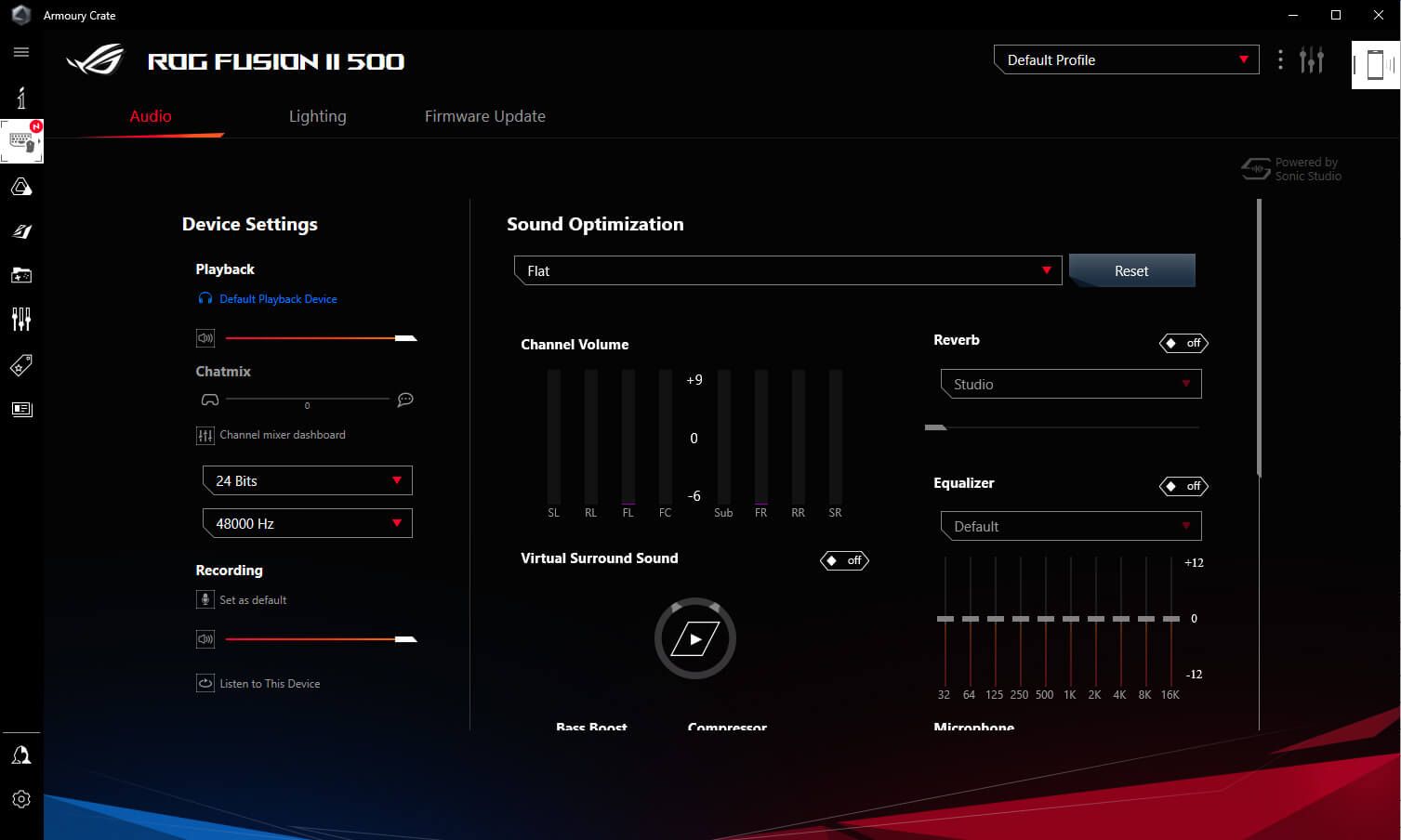 For music, I wasn’t a fan of the stock tuning. It’s just too bassy for my personal tastes, so I did have to turn to Armory Crate to create a second EQ profile for when I was listening to music. With a custom tuning applied, these headphones can sound very good. The drivers are very capable, and though I wouldn’t necessarily put them up against dedicated music headphones, they are certainly better than most other gaming headsets out there today.

Having reviewed the Delta S Animate not long ago, I was happy to find that not much had changed here. I really liked that headset and had much the same feelings swapping between music and gaming. It too needed some personalization but once it was applied, you could really pull great sound quality for music from it. The Fusion II 500 offers a listening experience that’s almost identical for $70 less and that’s hard to argue with.

The microphones also need a little customization in my opinion. It’s entirely possible to plug and play with these, but the noise cancelation is a bit too aggressive for my taste. Dialing it back allows you to get a more natural sound overall and better balance eliminating background noise with sounding full and true to life. There is really no escaping the extra distance you have with an embedded microphone like this, but while it’s perceptible, ASUS has really done an excellent job of making them sound like a normal boom microphone. 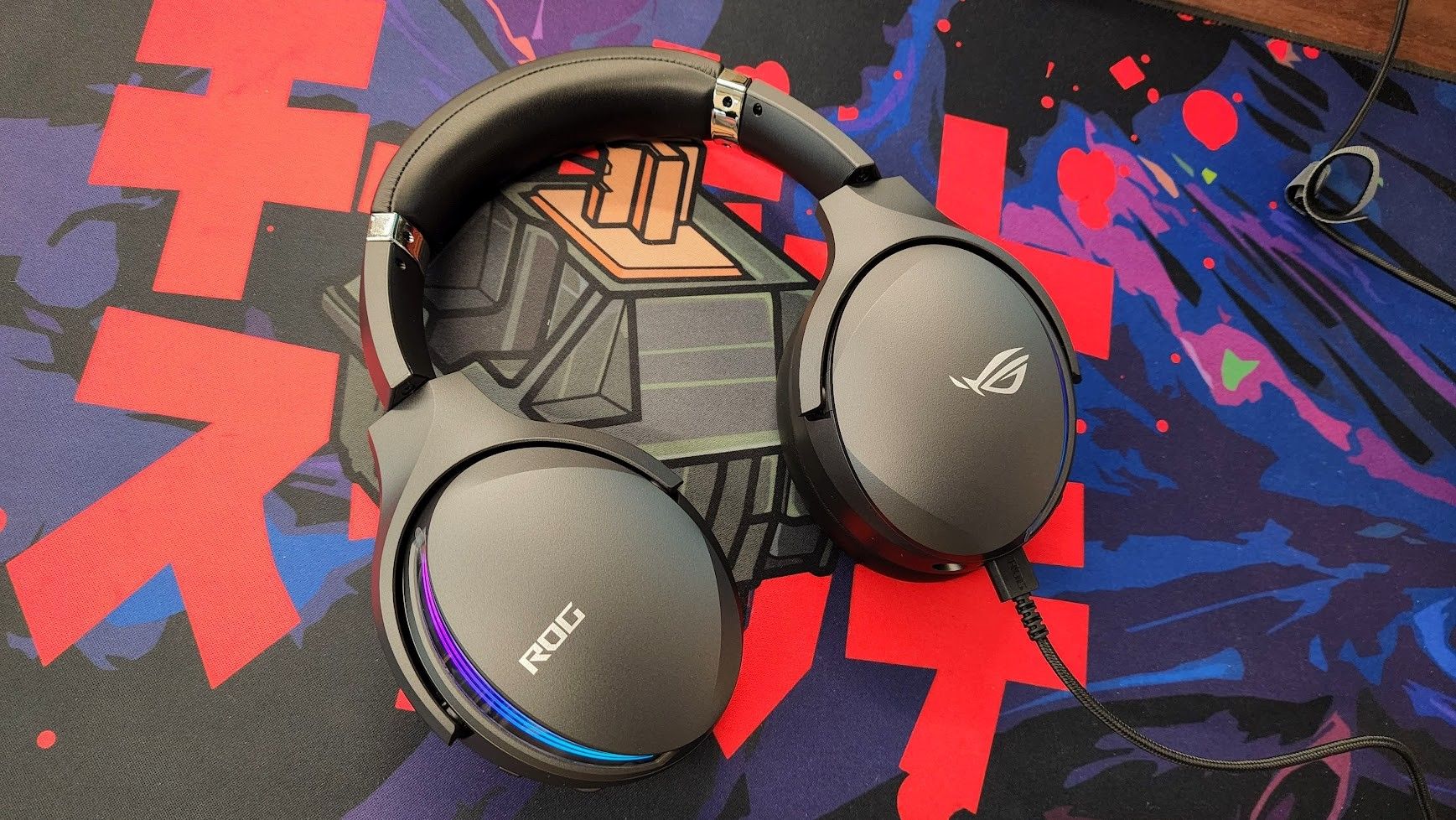 At $179.99, the ASUS ROG Fusion II 500 is a premium-price gaming headset with an array of features that match. You’ll really getting quite a bit here, from great gaming sound quality, tasteful RGB, excellent comfort, and wide compatibility with different platforms. At the same time, you should plan on customizing the sound if you want a next-level music experience compared to other gaming headsets. If you’re looking for headset that puts sound quality first, and don’t mind tweaking some settings, this is a solid buy.