As a lifelong PC gamer, I’ve used a lot of mice. The best gaming mouse should enhance and improve the abilities of the player. The ASUS ROG Chakram X is a new gaming mouse in the Asus ROG line that offers a lot in terms of features but also seems to ignore some basics that are easily taken for granted.

This mouse is a hodgepodge of traditionality, with four side buttons and an ergonomic shape. It also features the oddest of oddities as well, with a joystick slapped on the side, and just about a half-thumb extension from the side buttons. Does it work? Yeah, I think it does. Does it do what it set out to do? Probably? Is it worth the cost of admission? It’s not as easy as yes and no. Let’s jump in!

First off, with no bearing on the review score, I have to point out that the ROG Chakram X looks real nice in the shadow of my Asus ROG desktop. I’d be lying though if I said it wouldn’t look just as good next to any other. If there is anything that the ROG Chakram X hits out of the park, it is that the mouse looks and feels like a dream. 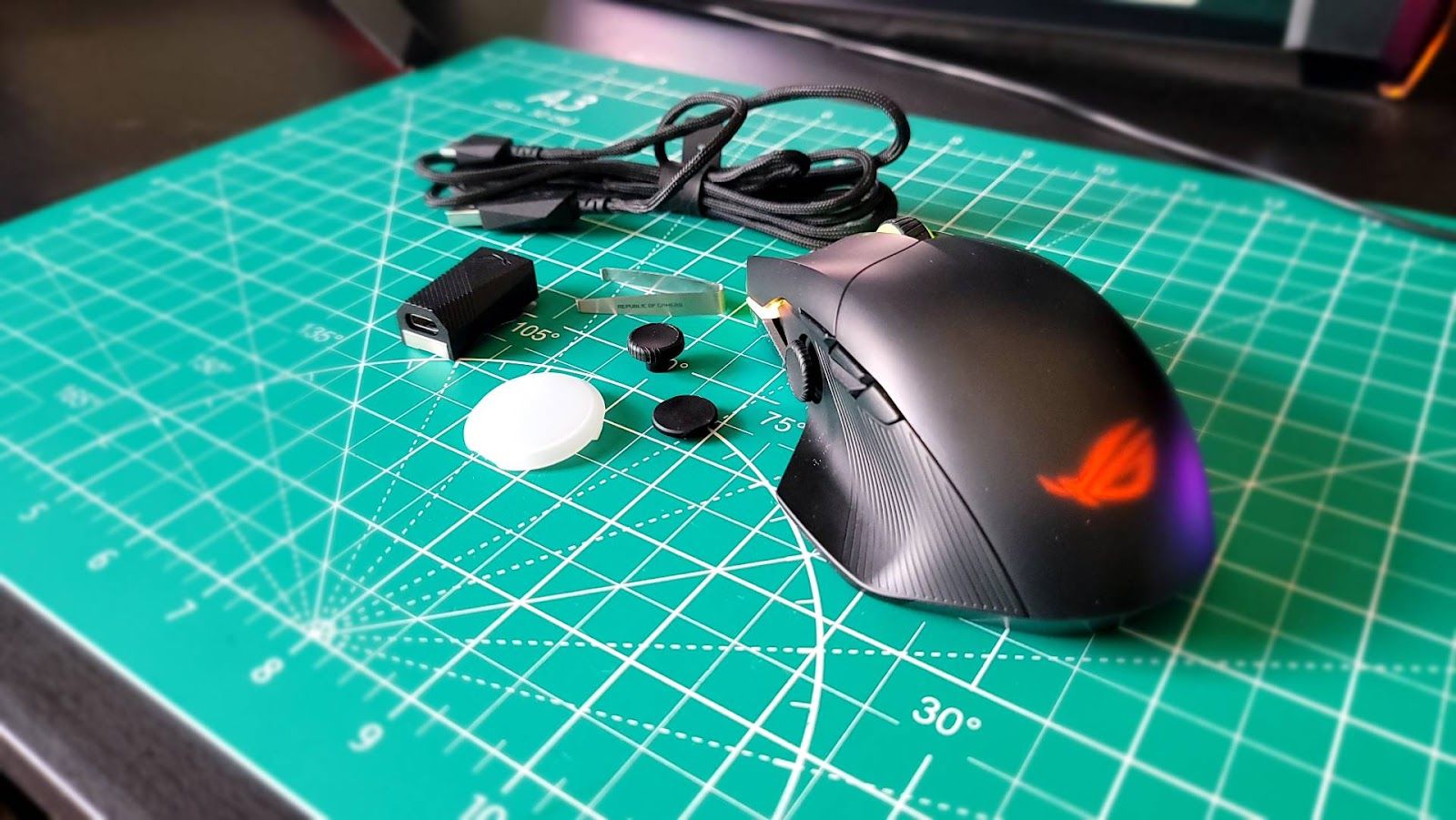 Like a sportscar, the ROG Chakram X has a lot under its hood. With a magnetically held palm rest and left and right mouse buttons, getting into the guts of the mouse is quick and easy. The microswitches can be swapped out for mechanical switches. The joystick has a swappable long stick, short stick, and cover too.

I really enjoy the matte finish on the mouse, as it doesn’t seem to pick up much oil and dirt from usage. The fact that I was able to synch up the RGB from my desktop to the mouse with Armoury Crate (Asus’ proprietary app) also was really cool. Even the ease at which the scroll wheel glides is impressive. This mouse was designed to be the centerpiece of an Asus ROG gaming setup. As a matter of fact, the USB dongle clips right onto the odd mystery flap that my desktop has.

The major selling point to the ROG Chakram X is the joystick, let's not kid anyone. I absolutely love the idea of it. The main issue I found is that I have large hands and even then I found myself nearly palming the entire mouse uncomfortably to make use of the joystick. If that was a few centimeters closer to normal thumb placement (or even at normal thumb placement) I’d be completely smitten with the mouse.

The main games I played with the mouse were Destiny 2 and Lost Ark. It was amazing to bind my class ability, rez, and melee abilities to my mouse in Destiny 2. I had an extra spot so I also bound my sparrow to it because why not? Lost Ark was a little more complicated because at first, I tried binding skills but the frequency that you use them made my hand hurt. Then I moved to my mount, special ability, map, and escape song. It worked better because everything was more situational. 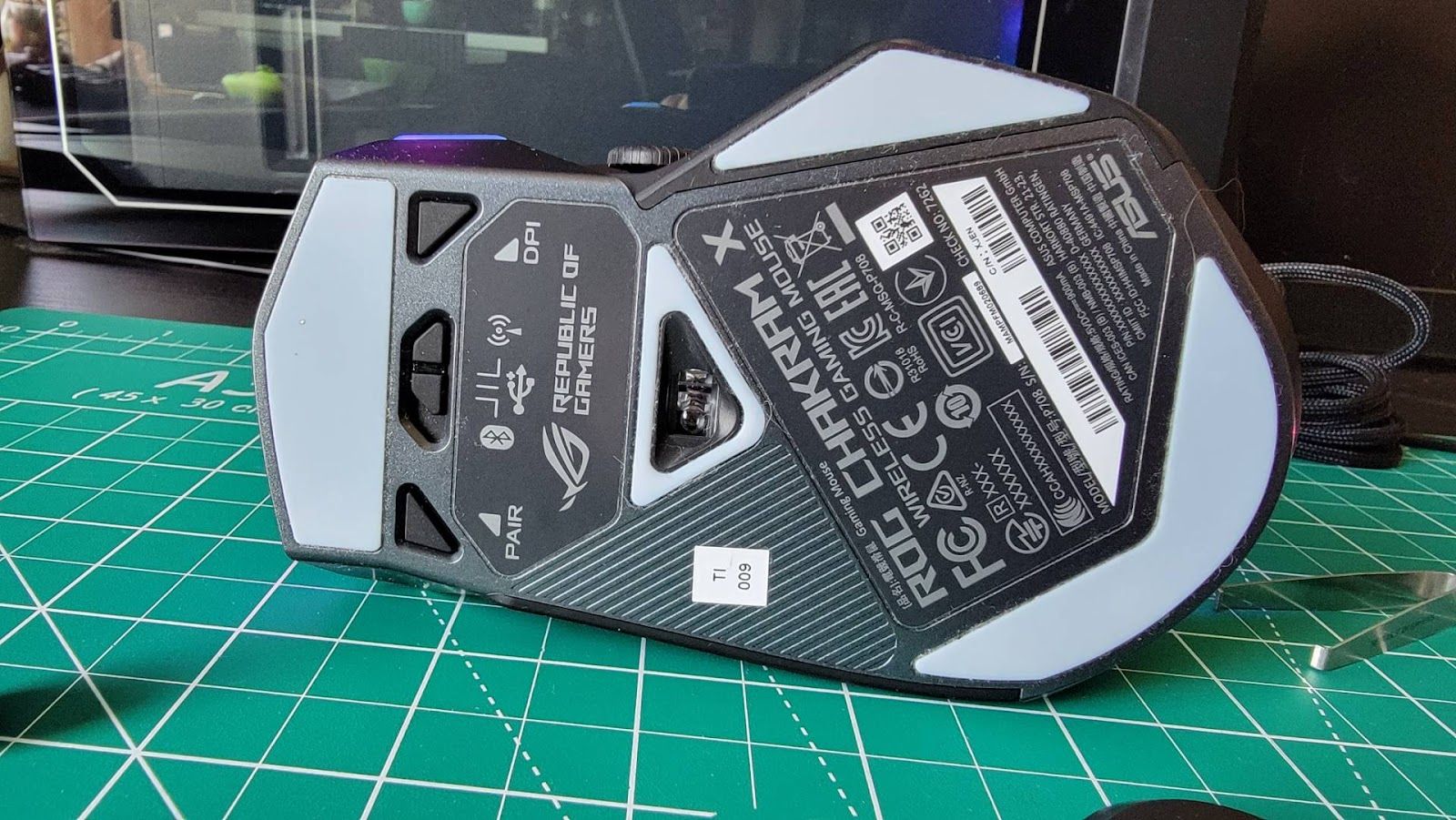 Therein lies the main problem with the ROM Chakram X. The idea of a thumb-joystick on a mouse isn’t a bad idea. In fact, it is sort of genius because it gives quick access to things that may sometimes be out of range of a keyboard’s WASD. The catch is that to fully utilize it, I have to move both my wrist and my thumb in ways I haven’t naturally done in 35 years of computer usage. I’m old, that is uncomfortable.

It’s worth noting that the joystick can be changed from analog to digital. That means that it can function as a mappable D-pad or an actual true blue mouse. While I couldn’t find a use for an analog joystick in the 2 weeks I spent for the review, I’m not bold enough to say it would be completely useless.

There are also a few things on the ROG Chakram X that I just don’t get as well. I prefer a heavier mouse, I know that many actually prefer a lighter one. The ROG Chakram X seems to land itself in the middle of the road, which means it’s a little too light for me and probably a bit too heavy for others. The DPI settings are also on the bottom of the mouse, so you can still switch on the fly but it involves flipping the mouse over which is archaic at best.

A Powerhouse of Precision and Customization

I don’t want to come off like the ROG Chakram X is not a nice piece of hardware. It’s still a very comfortable to use mouse and if I completely ignore the joystick or put the cover on it, the ROG Chakram X is still very responsive. Partnering this with the features that are included within the Armory Crate, there is still quite a bit to be happy about.

One major takeaway about every button and wheel on this mouse is that they are very easy to click. I’ve used mice from just about every company you could imagine and the click resistance on the ROG Chakram X is more or less what I’d call just right. The scroll wheel is an easy click and doesn’t interrupt scrolling either, so in a game like Final Fantasy XIV, you can switch between skill bars with ease.

I’m not the biggest fan of running a completely separate piece of software to control and customize peripherals. Fortunately, the ROG Chakram X uses software already on my PC. For those of you that don’t have an Asus ROG computer, the Armory Crate is one of the easier-to-navigate programs to make adjustments to the device. I was able to save 5 different profiles in the engine, so it was super easy to navigate from game to game.

I was able to synch the ROG Chakram X to my laptop and switch between desktop and laptop without having to pull the dongle. The mouse has a switch on the bottom that can allow Bluetooth, USB, and dongle connections. Moving from one system to another is just a flick of the switch. 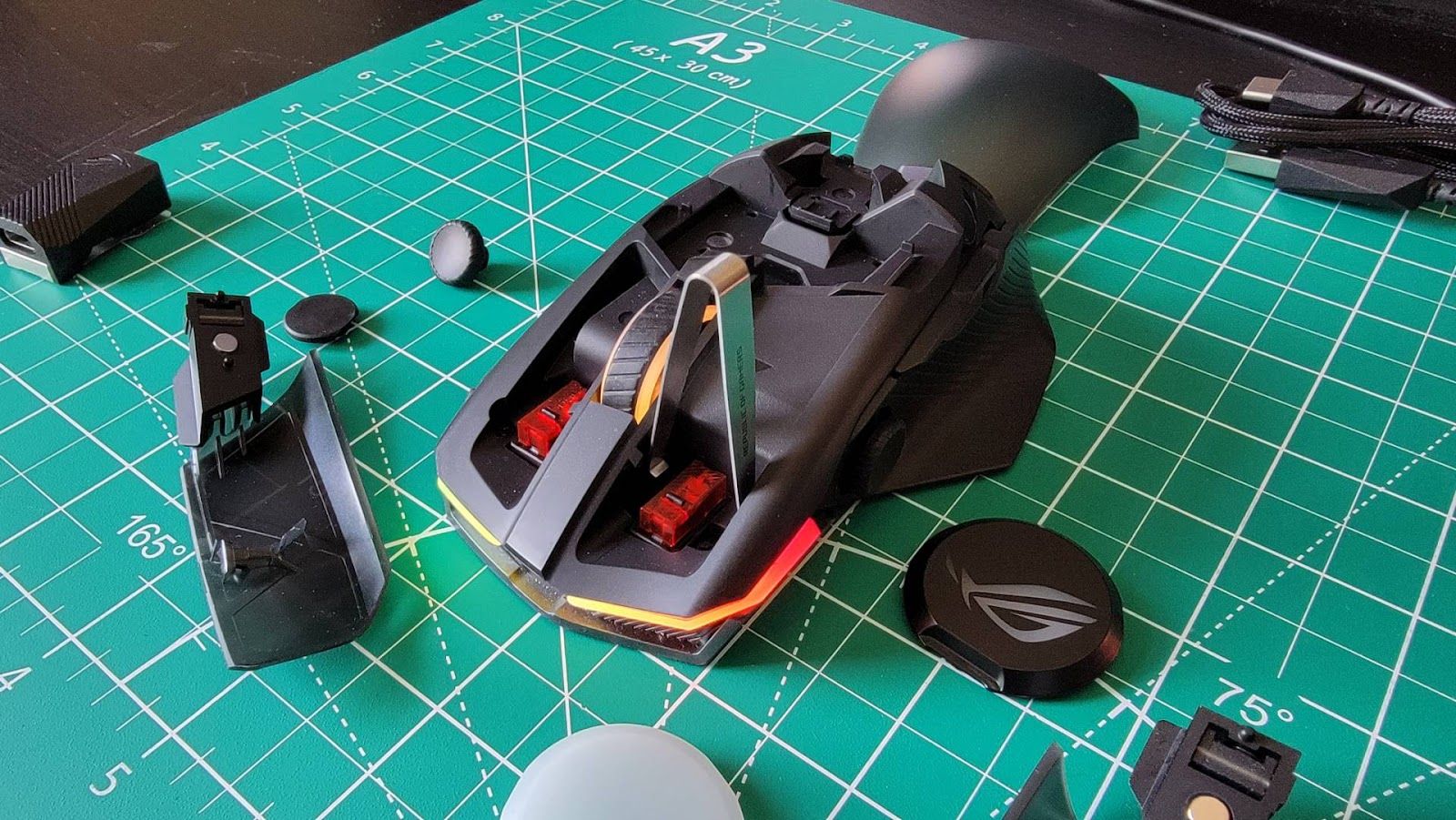 Overall, I don’t think the ROG Chakram X is a bad mouse. There is a lot to like with the hardware. The joystick is probably the biggest overall detractor and it still works. Yes, it would be nicer if it was closer. It’s still usable as a two or three-way button. With the customizable DPI options and mapping tools within the Armory Crate software, I was able to set profiles for my favorite games too. That’s a huge deal because no one wants to remap everything when they go from a shooter to MMORPG. If the joystick were just a little closer, the mouse had interchangeable weights and a one-click DPI it would be absolutely perfect. The $159.99 cost of admission is a little high, but the ROG Chakram X really still is one of the best gaming mouses I’ve used, caveats aside.