ASUS is no stranger to gaming headsets, but with the ROG CETRA True Wireless, it’s officially breaking new ground with a headset that’s designed for all of your entertainment needs. It features active noise cancellation, high fidelity customizable sound, and low latency gaming. At $199, it doesn’t come cheap, but may just be the one headset you can use for everything. 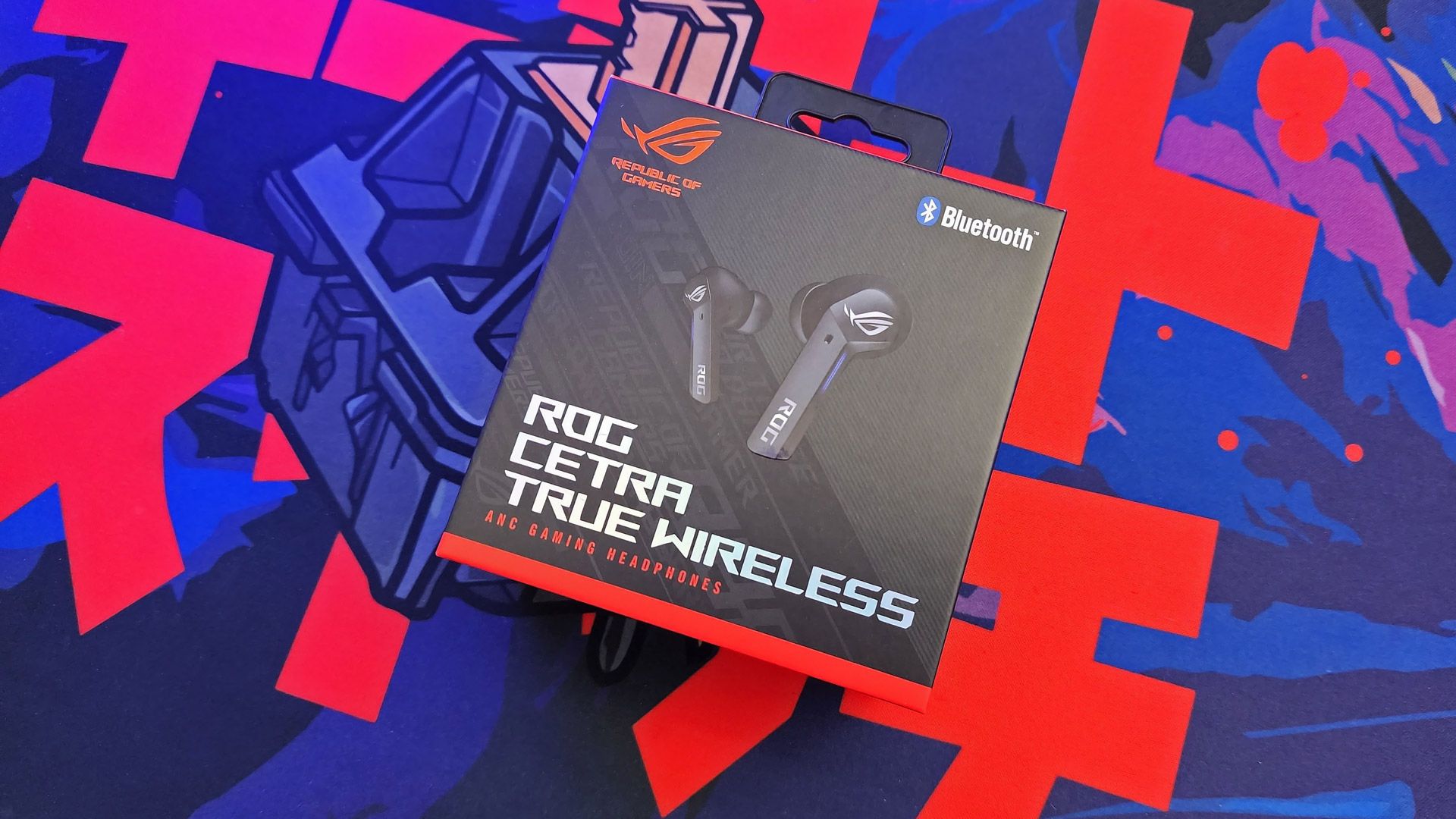 ASUS ROG CETRA True Wireless - What Is It?

The ASUS ROG CETRA True Wireless is the successor to last year’s ROG CETRA II, a wired pair of gaming earbuds that brought active noise cancellation and hi-fi audio to the portable gaming world. As you might have guessed from the name, the CETRA True Wireless cuts the cord entirely and opts for an AirPods like design crafted for all-day wear, whether you’re gaming or listening to music.

These earbuds aren’t limited to portable use, but you’d be crazy not to take them on the go. Not only are they priced in line with other premium true wireless earbuds, but the feature set is designed to cater to the needs of your entire day, not just when you’re sitting in front of your gaming PC. Active noise cancellation and ambient modes ensure you can block or, or turn up, the outside world depending on your situation. They also feature water resistance, intuitive touch controls, Armory Crate app control with spatial audio and customizable EQ, and quick recharging. 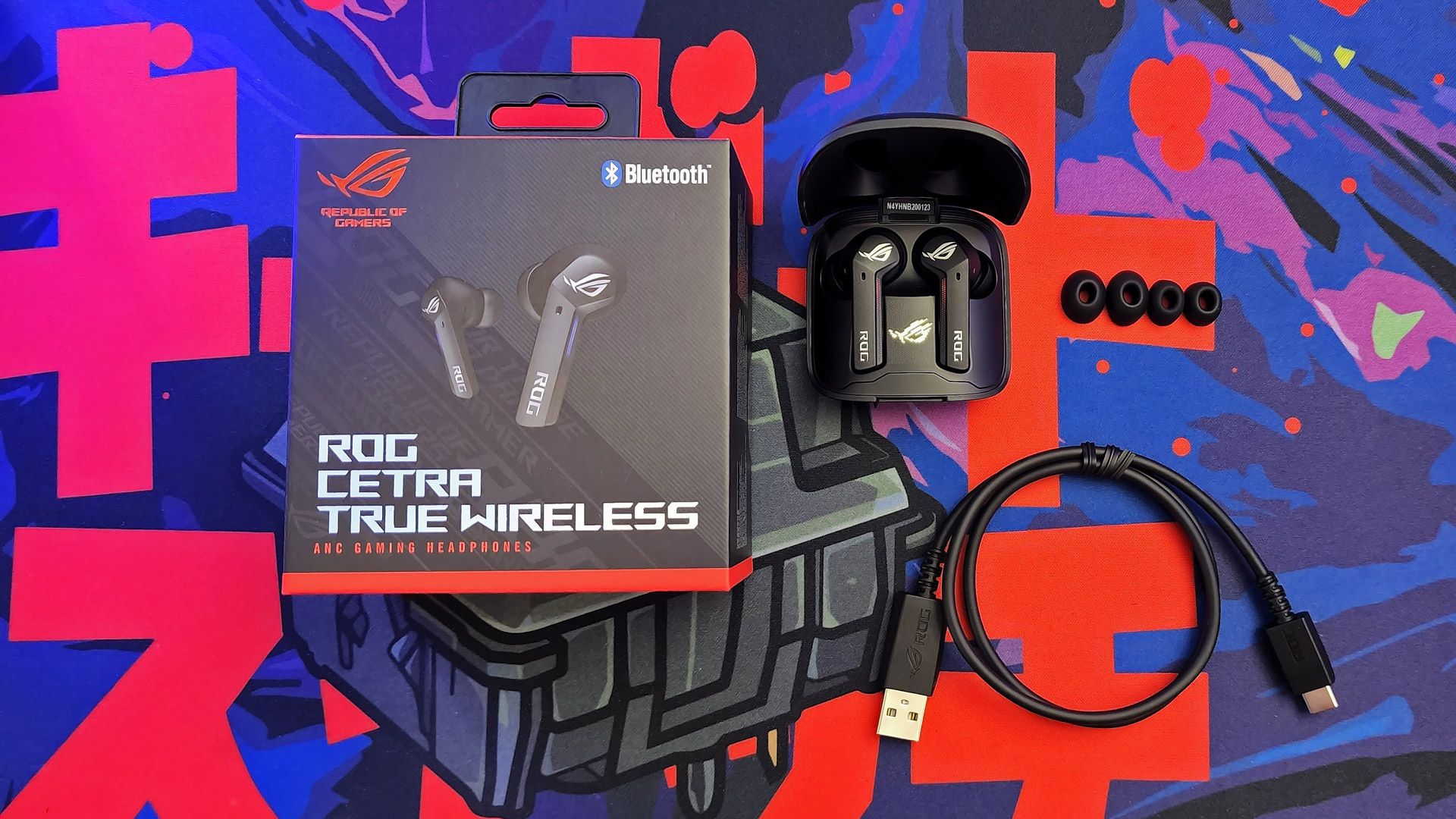 The buds themselves come in a small and stylish box. Inside, you’ll find the buds inside their case with the battery terminals covered for safe transit (but be sure you charge them fully before using them). There are also three sets of silicone ear tips and a charging cable. The presentation is simple, and at this price, some additional ear tips would have been welcome, but you get everything you need without wasting any time.

The fit and finish of the buds and case is very nice and is iconically “ROG.” The Republic of Gamers brand has a very unique aesthetic and you can clearly see that DNA here. In the center of the case is a small LED matrix, displaying the ROG eye logo with cycling colors. The edge of each earbud also features a matrix that displays the charging and connection status but is otherwise off when they’re in your ears. There’s also some pretty bold ROG and eye branding, but it doesn’t look bad when worn — unlike over-ear headphones, no one is going to give you side-eye for wearing a “gaming headset” out of the house with these buds. 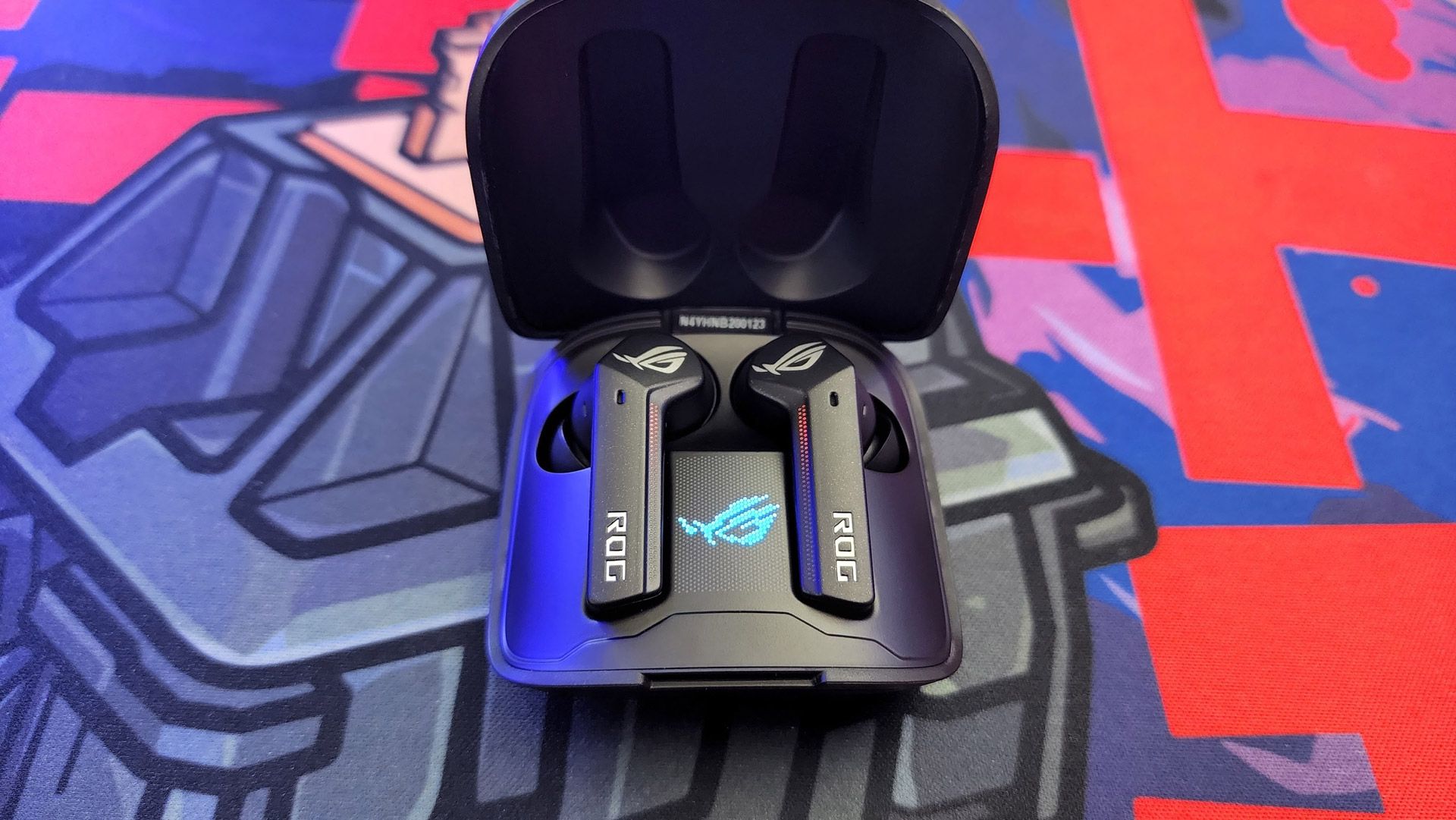 The CETRA True Wireless use the classic AirPod’s “bud and stem” design, which works well for comfort and clarity on calls. The buds are secured both in the ear canal and are supported by the outer ear, as well, making them comfortable for long gaming sessions and hours spent out of the house. Each bud has a microphone right at the bottom of each stem, positioning it closer to your mouth for improved pick-up. Oddly, these buds don’t have ASUS’s AI noise cancellation, so they do suffer more from background noise, but are clear overall.

Those microphones also pull double duty for noise cancellation. Two other microphones are positioned on the inner side of the bud to cancel out any noise that makes it inside of your ear. It’s a hybrid, feed-forward, feed-back approach and is useful for tackling middle-frequency noise rather than just low droning sounds (like engines). For users sensitive to active noise cancellation, there are heavy and light noise cancelling modes, as well as an ambient mode for when you need to hear your surroundings. Cycling between these is easy with only two taps on the left bud. 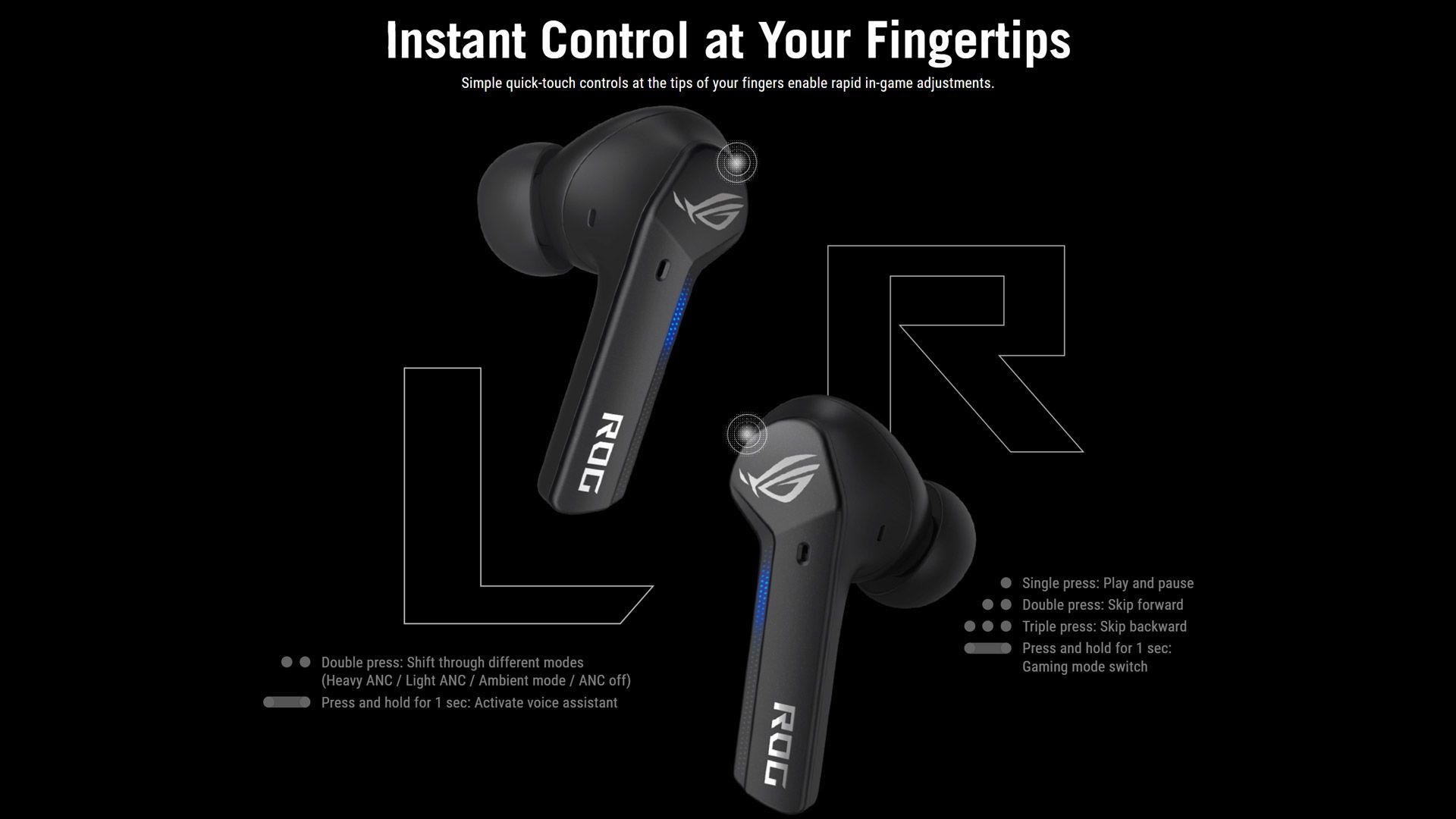 Inside those shells, the CETRA uses ASUS’s Essence drivers, the same as we’ve seen on the company’s flagship gaming headsets. They’re big 10mm drivers, capable of pushing a lot of sound. Whether you’re gaming or listening to music, you won’t have any trouble getting enough volume. ASUS deserves a lot of kudos for these drivers too. The Essence drivers are some of the best tuned true wireless drivers I’ve ever heard. They’re the silver bullet, the real deal, and make these earbuds.

When it comes to battery life, the CETRA TWS are good but aren’t breaking any new ground. Without ANC, you can count on 5.5 hours or 4.5 hours with ANC on. Since that’s likely how you’ll be listening to them, 4.5 does fall on the light side. They do support quick charging, and 10 minutes in the case returns 90 minutes of listening time. The case has a beefy battery, enough to provide 27 total hours of listening time, which is especially impressive given its small size. It also supports wireless Qi charging, so you have one less wire to worry about.

With that out of the way, it’s time for games and music! It’s the most important quality of any pair of headphones and it’s exactly where the CETRA excels.

ASUS’s Essence drivers are truly excellent. The stock tuning is V-shaped, so there’s plenty of bass to fuel explosions and cinematic moments, but it doesn’t overwhelm the rest of the listening experience. In fact, the CETRA is remarkably balanced. There is plenty of detail all throughout the spectrum, so you’ll never have to worry about missing an important detail in your games. That includes everything from teammate callouts, to tiny immersive details in MMORPGs, to all-important footsteps in competitive shooters.

As a huge music fan, I was especially surprised at just how good this sound is for listening to music throughout the day. The earbuds have exceptionally good layering and separation, which makes music sound rich and layered. You can easily make up the multiple layers of instruments and voices and hear each distinctly. It’s a class above any other gaming earbud I’ve heard and even most over-ear gaming headsets. ASUS has nailed it with the sound — and those same qualities translate directly to gaming. You’ll hear everything, crystal clear, and with exceptional positioning to pinpoint where every sound is coming from. 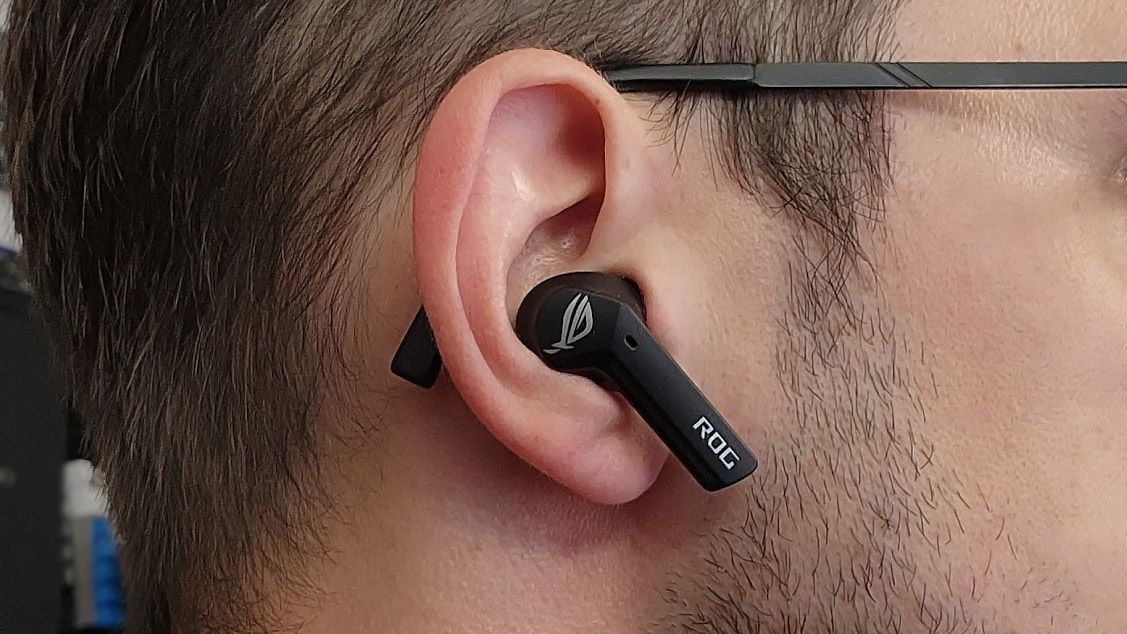 Importantly, ASUS has also baked in a gaming mode into these earphones. Turning this on, either through the app or holding the right earbud, dramatically reduces latency, so there won't be a noticeable delay between what you’re seeing on screen and hearing in your ears. This does reduce the distance you can walk away from your phone or PC before the signal breaks up, but if you’re gaming, you’re probably sitting still anyway, so it’s a fair trade-off.

The app also expands functionality with a full 10-band equalizer and a healthy array of presets to customize your sound. I had mixed results with the presets and generally enjoyed the stock sound most of all, but they’re there if you’d like to make changes to taste. There’s also a Bass Boost slider if all you’re looking for is some added thump. While there’s also a Gaming Mode toggle, there’s no option for adjusting ANC, so you’ll need to do that on the earbuds themselves.

The app also has a Virtual Surround Sound option, though I would only suggest using this on the PC and not the Android app. Enabling virtual surround sound on Android adds a glaring digital effect that sounds absolutely terrible. Instead, I would recommend enabling Dolby Atmos if your phone supports it, or go without spatial sound entirely. This doesn’t occur on PC, however, so you’re safe there.

The ANC on these earbuds is good, but doesn’t compete with the like of the AirPods Pro or Jabra Elite 7. It’s a nice feature to have and use in conjunction with music to really block out the outside world, but on its own, the effect is only moderately effective against voices and keyboard sounds. It does work well on typical droning sounds like PC case fans, engines, and HVAC units. I was disappointed to find that you can’t just use these earbuds for ANC, however, as they automatically turn off when sound isn’t being played. So using these for studying or working isn’t great if you’re just looking to enhance your own personal quiet. 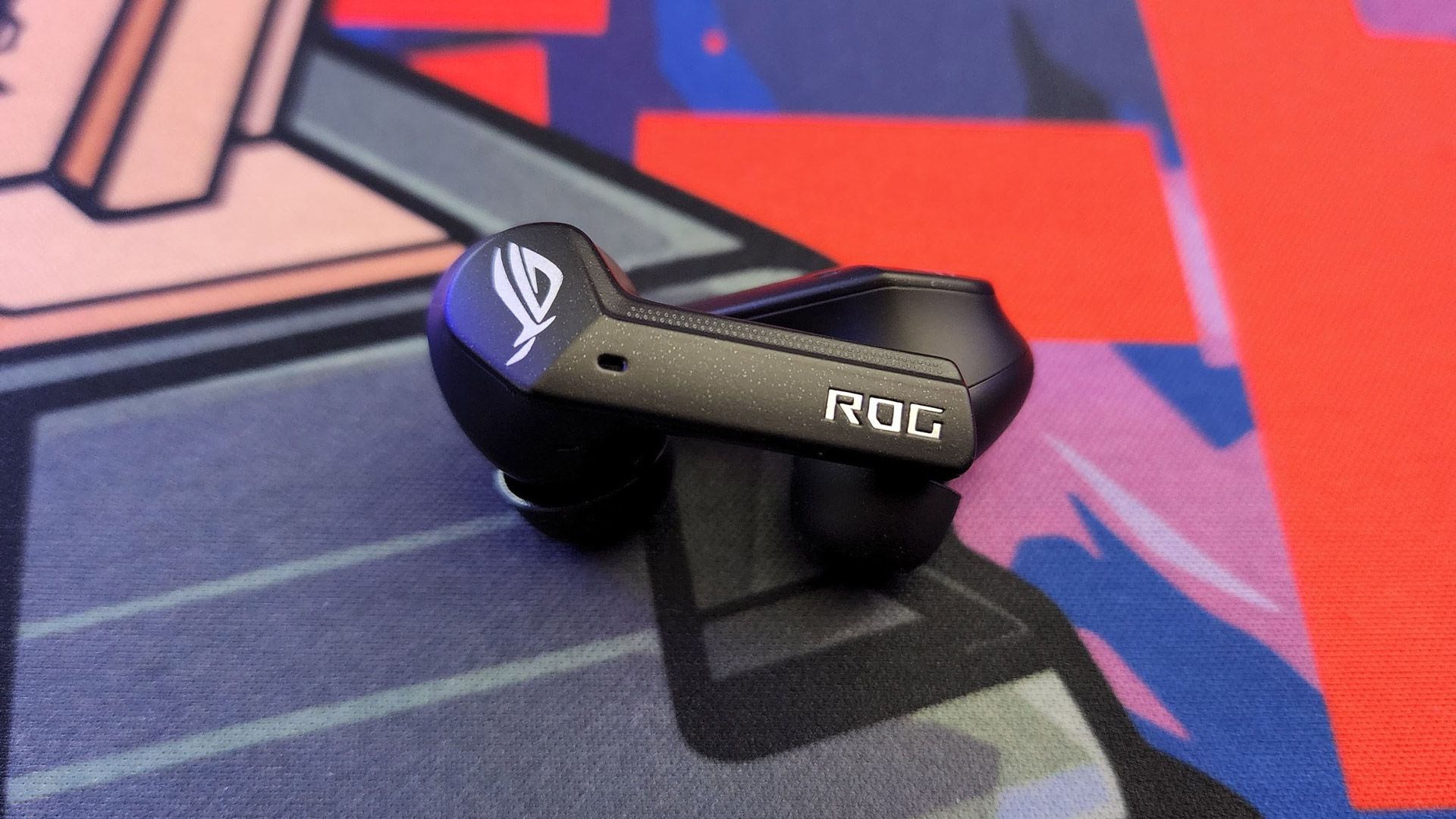 Taken as a whole, the ASUS CETRA True Wireless is an impressive gaming headset that can also double as your all-day wear. It’s not perfect, but offers impressive sound quality, gaming performance, and comfort, which helps balance out its high asking price. And on that point, this does feel a bit too expensive for the misses we find here. If you’re a gamer looking for an “all-in-one” headset that puts sound quality first, this is certainly worth a closer look, but will be an even better buy on discount.