If you’ve been in the market for an ultrawide but don’t want to give up your resolution or refresh rate, AOC might just have the answer. The CU34G2X is 34 inches, 1440p, 144Hz, and tops it off with adaptive sync, all for less than $500. But is there a catch? I’ve spent more than two weeks using it as my daily driver and have the answer — and the results may surprise you. This is our review. 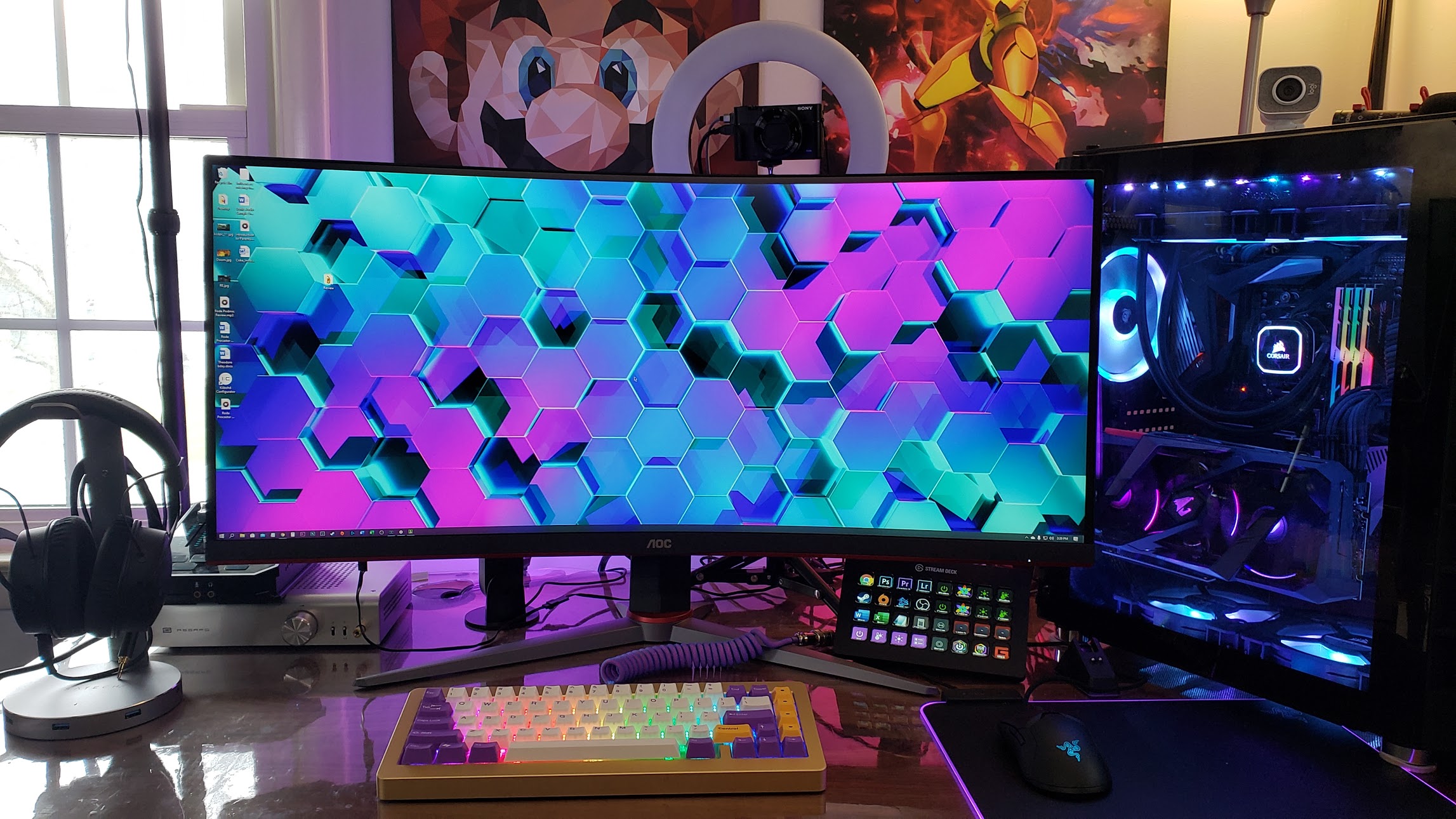 Ask anyone who games on an ultrawide and they’ll tell you the same thing: it’s a game-changer. The extra screen real estate makes a huge difference in how immersive games feel to play, especially if the monitor has a curve like the AOC CU34G2X. Game support has also ticked up so much that I haven’t found a major game to be unplayable or poorly scaled in quite a long time. The wider space also works wonders for content creation — 16:9 feels downright cramped in Adobe Premiere now!

The AOC CU34G2X comes to market at $449 and offers an impressive set of specs. This is a full 1440p ultrawide (3440x1440) that also features deep 1500R curves and fast 144Hz refresh rate. On top of that, the panel actually comes in with a greater color depth than originally reported when the two monitors in this line were announced. Instead of being limited to 8-bit color depth, a quick dip into the Nvidia Control Panel shows that you can actually set it to 10-bit, Full RGB without needing to lower any other settings. That’s impressive and also a bit curious; why wouldn’t AOC by selling this more? I have an unproven idea, which I’ll get to in a little bit.

The CU34G2X uses a VA panel, which I’m happy to see. VA panels tend to represent a nice middle ground between TN and IPS displays, balancing out color and response time. The display is certified to cover 119% of the SRGB color spectrum and 88% of the Adobe RGB spectrum. It also features a 3000:1 contrast ratio, which is typical of VA gaming panels.  In fact, the CU34G2X comes pre-calibrated from the factory and AOC includes a certification sheet right in the box. It’s a nice touch that I liked seeing. I would still lean toward a dedicated IPS panel for professional content creation due to its improved color accuracy, but the results here are great for gaming and work well for hobbyist content creation.

That said, I found the display to be a bit dim out of the box with the factory calibration. To achieve proper calibration, the brightness needed to be set at about 60%, which was too dim for my liking. Thankfully, it supports multiple profiles, so for gaming I can opt for a bright and vibrant preset and for photo or video editing, I can swap to a flatter, more accurate profile. 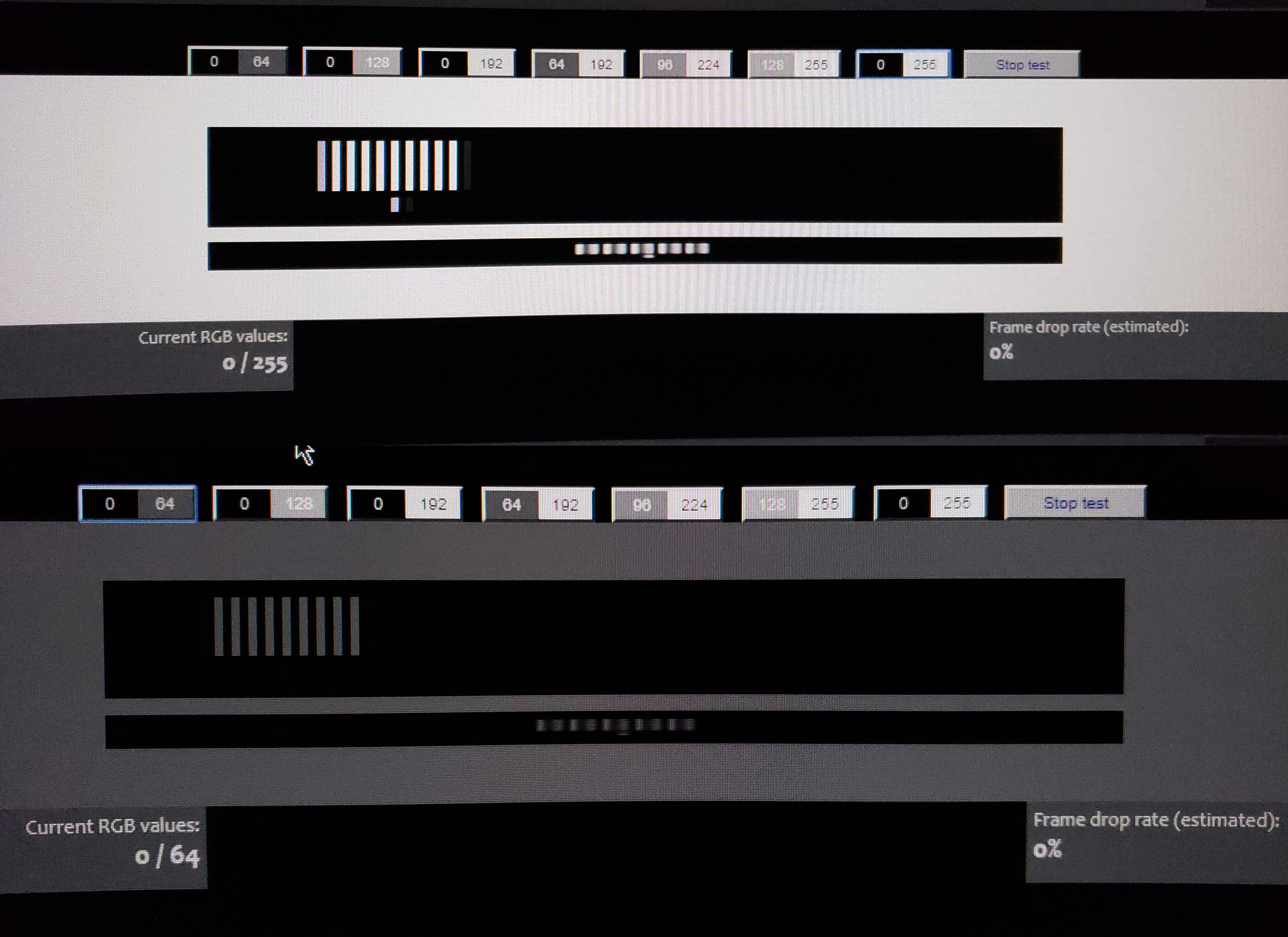 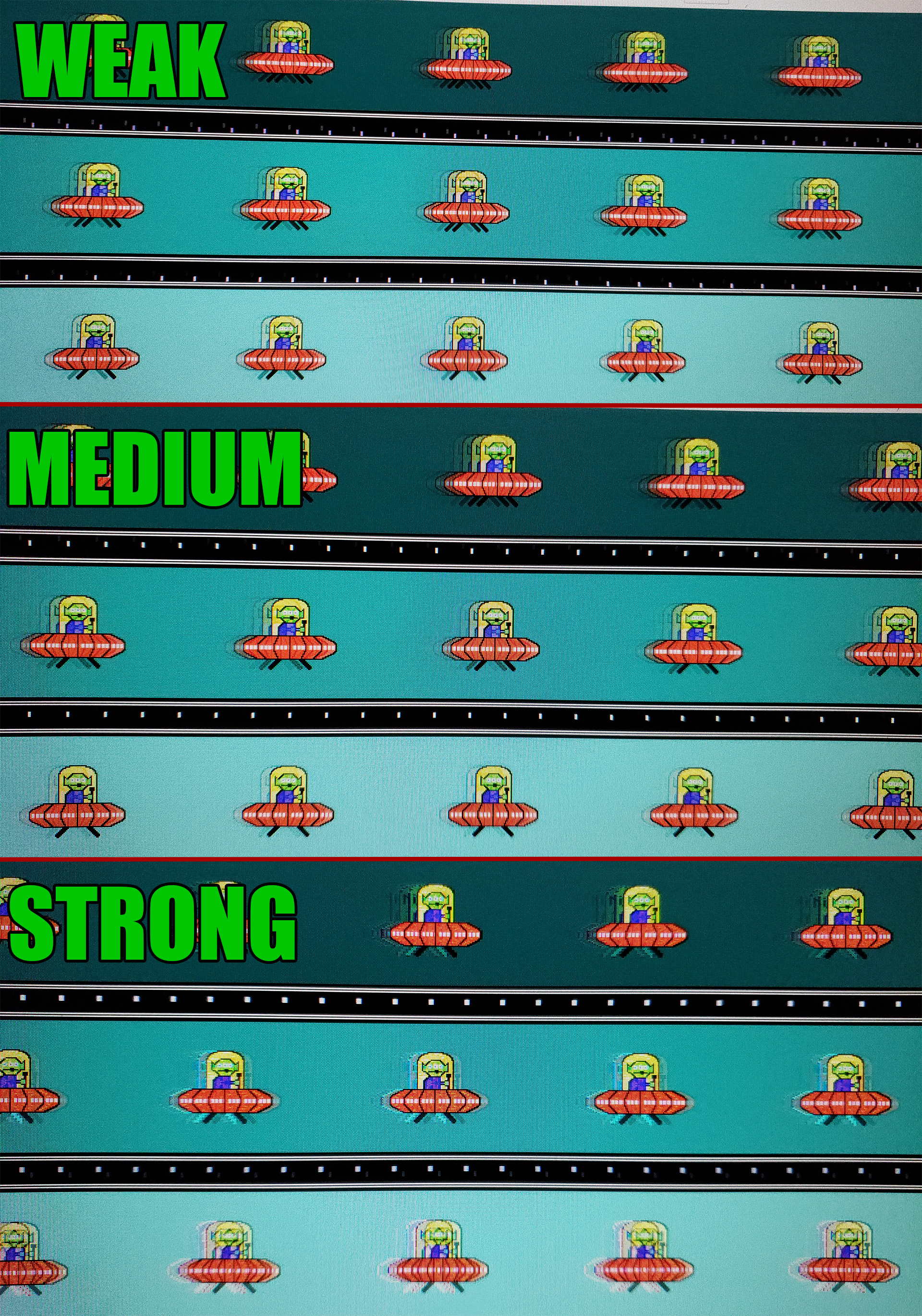 AOC quotes the monitor as having a 1ms response time, which is competitive with some of the fastest TN monitors used in eSports tournaments. I don’t have a way to test that personally, but our colleagues at PCMonitors.info found a response time just over 5ms, even with Adaptive Sync turned on. That figure matches up with my own selection of tests. Running the monitor through Lagom’s Response Time Test, I observed minor color shifting in the top two boxes, which is indicative of minor, but present, latency in light to dark shifting and vice versa. Likewise, the Test UFO Ghosting Test showed minor trails akin to other 4-5ms gaming monitors I’ve tested, like the Massdrop Vast (my previous daily driver).

As you can tell from the picture above, turning the Overdrive setting to Medium definitely helped. The CU34G2X also features a Motion Blur Reduction setting which achieves a very similar effect. Turning it onto strong resulted in artifacting, so I left it on Medium. During games, I wasn’t able to observe any ghosting whatsoever. 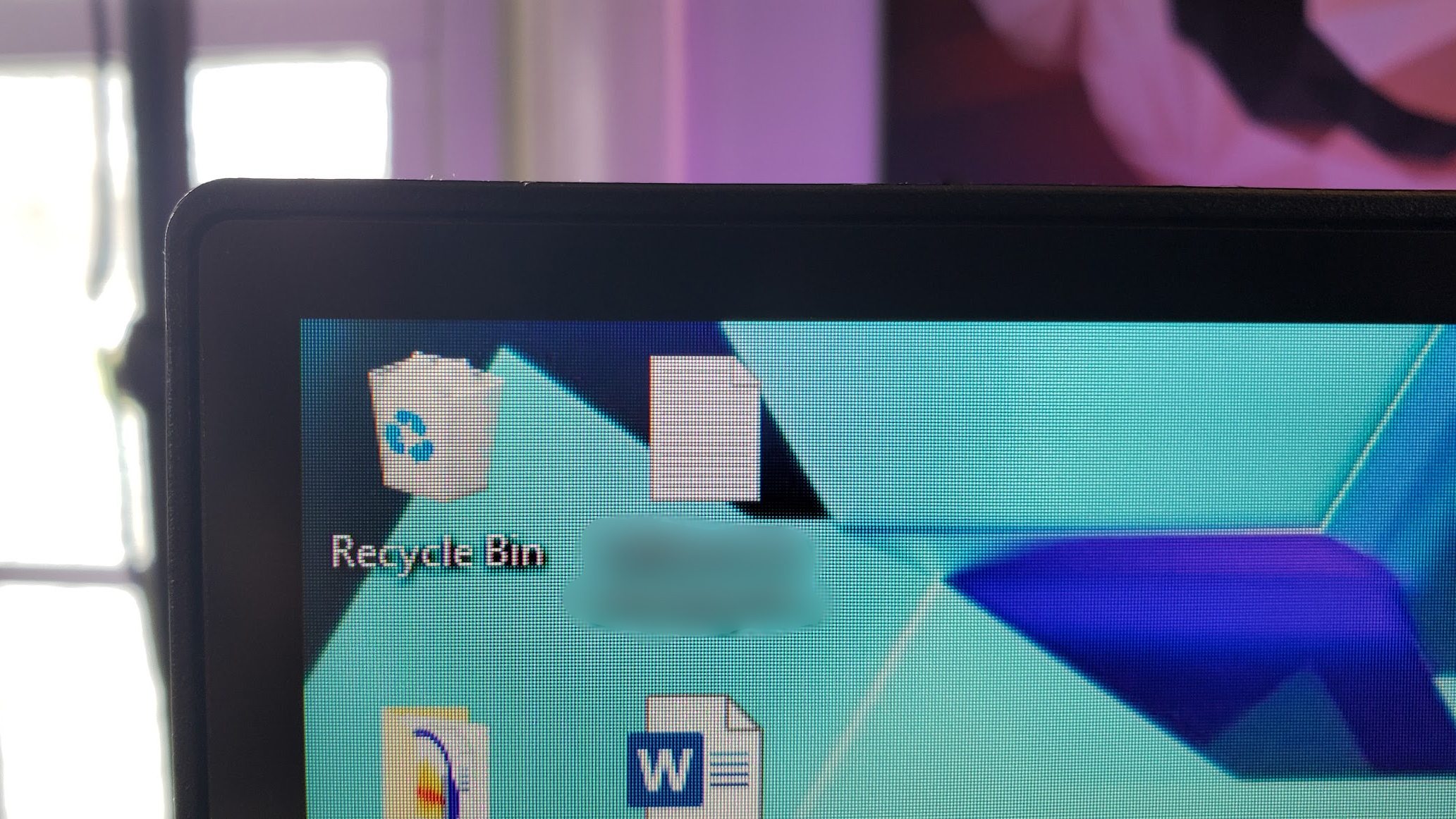 The panel itself is incredibly spacious. The 34 inch screen size is generous and is more than enough room for immersive gaming or even mimicking having a dual monitor setup. You can resize windows to fill each half, but the display also supports Picture in Picture (PIP) and Picture By Picture (PBP) to monitor two video sources at once or use a single display for your gaming PC and console, for example. It also adopts the “frameless design” which trades big plastic bezels for a quarter inch of black space around the picture and succeeds in making the monitor feel more generous.

The CU23G2X also supports HDR content within windows and even within a picture setting. This is another feature that AOC isn’t upselling but is clearly part of its core design. Turning on HDR locks out many customization settings, like color balance and contrast, but each can still be adjusting using Nvidia and AMD’s control panels if you choose. That said, peak brightness tops out at 300-nits and without local dimming, this isn’t a “true” HDR experience.

Still, I turned it on, left it on, and am happy it’s there. Why? Number one, there is some behind the scenes manipulation going on that saturates colors in games and plays with contrast in a way that elevates the experience. Second, being able to enable HDR in Windows brings up whites in a way that not only makes them more crisp but makes the whole screen feel brighter. It’s not “true” HDR, but it’s better than SDR any day of the week. As an added extra you find only after plugging in? It’s an unexpected extra.

Having tested several of these monitors and researched many more, I can also say that this combination of features has historically been fairly rare. 300-nits brightness is fairly standard, if a bit brighter, than last generation’s 34-inch ultrawides. 144Hz, Freesync, and even having the option for HDR are definitely improvements over what the monitor industry offered for this price even one year ago. For a display of this size, you can’t expect the world without paying a hefty premium, but the trade-offs in picture quality and brightness are really fairly minor for all that you’re actually getting. 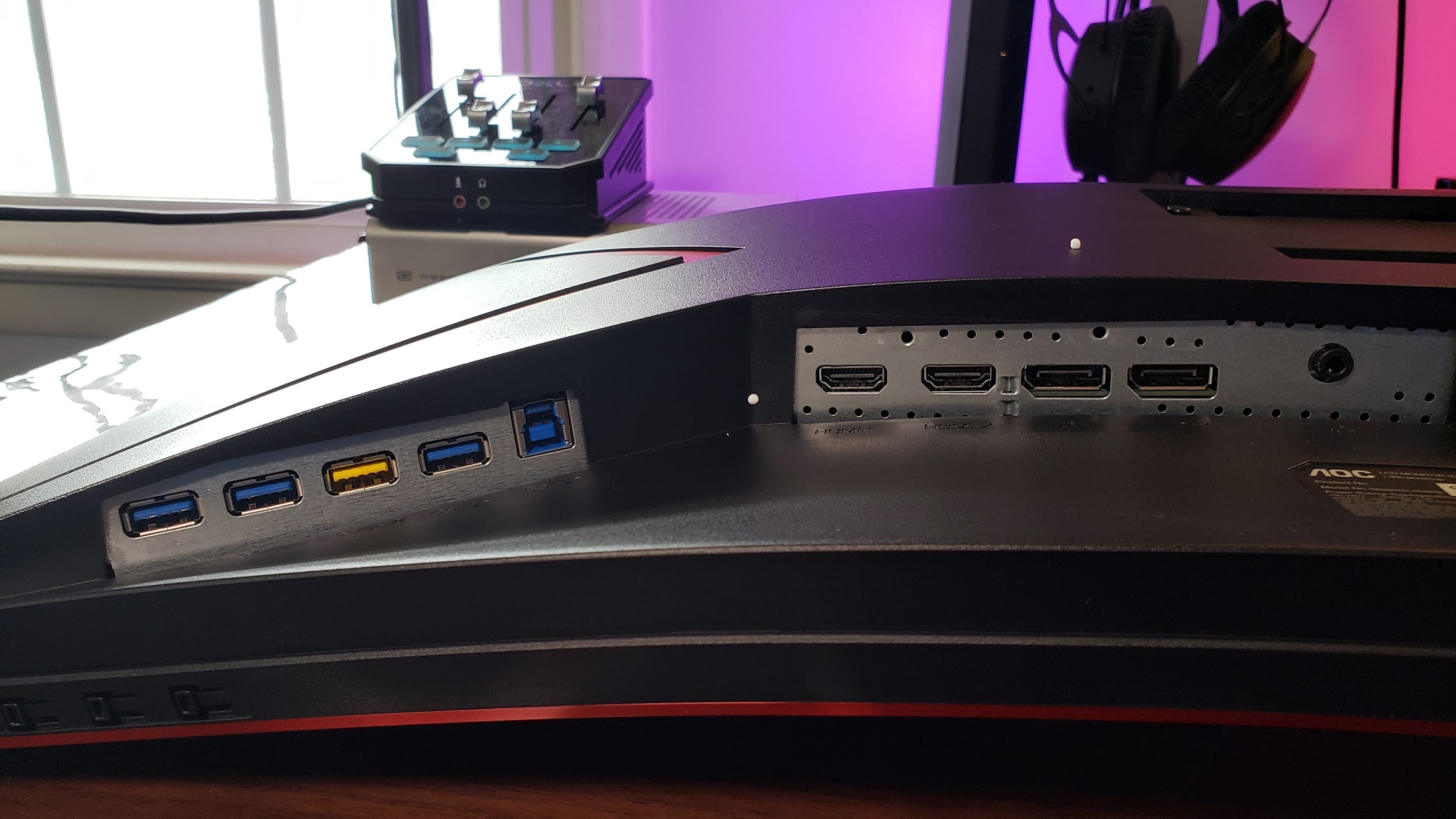 Around the back, you’ll find two DisplayPort 1.4 connections and a pair of HDMI 2.0s. There’s also a headphone jack (no speakers) and four USB connections for your peripherals. The yellow USB port also supports fast charging for your modern smartphone. The stand is decent and offers height, rotation, and tilt, and snaps in place without the need to screw it into the panel. It also supports the VESA 100 mounting standard if you’re rather put it on an arm or third-party stand.

So let’s get into the heart of this review: what is it like for gaming?

Before having the CU34G2X in for testing, I had been using the Massdrop Vast, which is very similar on paper. It’s also a curved, true 1440p monitor, if slightly larger at 35 inches. It featured an identical peak brightness of 300-nits and also had FreeSync/G-Sync support. The big difference was in refresh rate. The Vast was capped at 100Hz while the AOC peaked out at 144Hz. I expected a modest upgrade.

Comparatively, the CU34G2X has turned out to be a much better monitor. The hidden benefits of 10-bit full RGB color and HDR were immediately elevating. It also proved to have a higher consistent brightness across the board, which allowed the display to offer better vibrancy and pop. Most importantly, the jump to 144Hz was a big jump and easily the high point of the whole experience.

Gaming on the CU34G2X is smooth and fluid. The bulk of my testing was with Doom Eternal and it perfectly exemplified why a high refresh rate is worth paying extra for. The frenetic, demon slaying action was a perfect match for the monitor. Using my 2080 Ti, the sense of motion and flow were definitely enhanced. The CU34G2X offered the best ultrawide experience I’ve ever had under $500. For gaming, it’s a bargain winner. 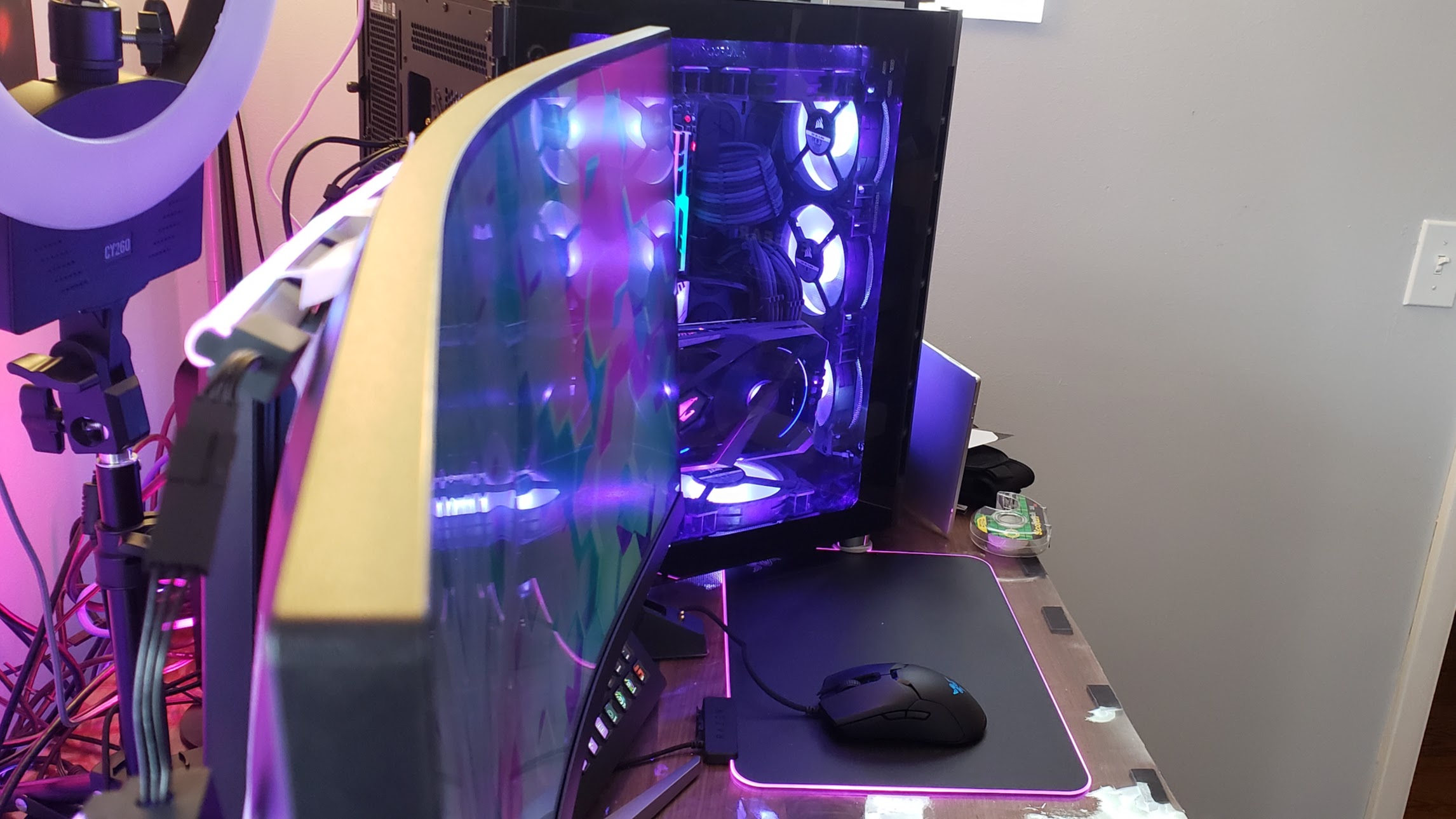 A Strange Problem That Seems to Be Solved

BUT… and this is a big but, it wasn’t without one major flaw which may now be a thing of the past. About once every 45 minutes, the screen would go black for 1-2 seconds before flashing back on. This was incredibly frustrating. In doing some research, I found that I wasn’t alone and it seemed to be related to G-Sync and its 48-144Hz default range. I believe that because disabling G-Sync completely removes the problem. But, that also makes the monitor much less appealing for gamers with Nvidia graphics cards. Instead, I followed a suggestion and tweaked the range to 52-144Hz. Small enough where I never noticed it and the problem was suddenly solved for my gaming. Strangely, it continued to happen in large Zoom conference calls of 15-20 people.

I’ve heard G-Sync. I’ve heard that it’s related to Low Framerate Compensation and how Nvidia’s drivers interpret that. I’ve wondered if it could be related to bandwidth over DisplayPort. I can’t say for sure.

What I can say is that, as of today, that problem appears to be fixed with the latest Nvidia driver update. I’ve set the G-Sync range back to stock and haven’t had it happen at all since and I’m going on six hours of straight use without a single flash. I will update this review should the flash come back. 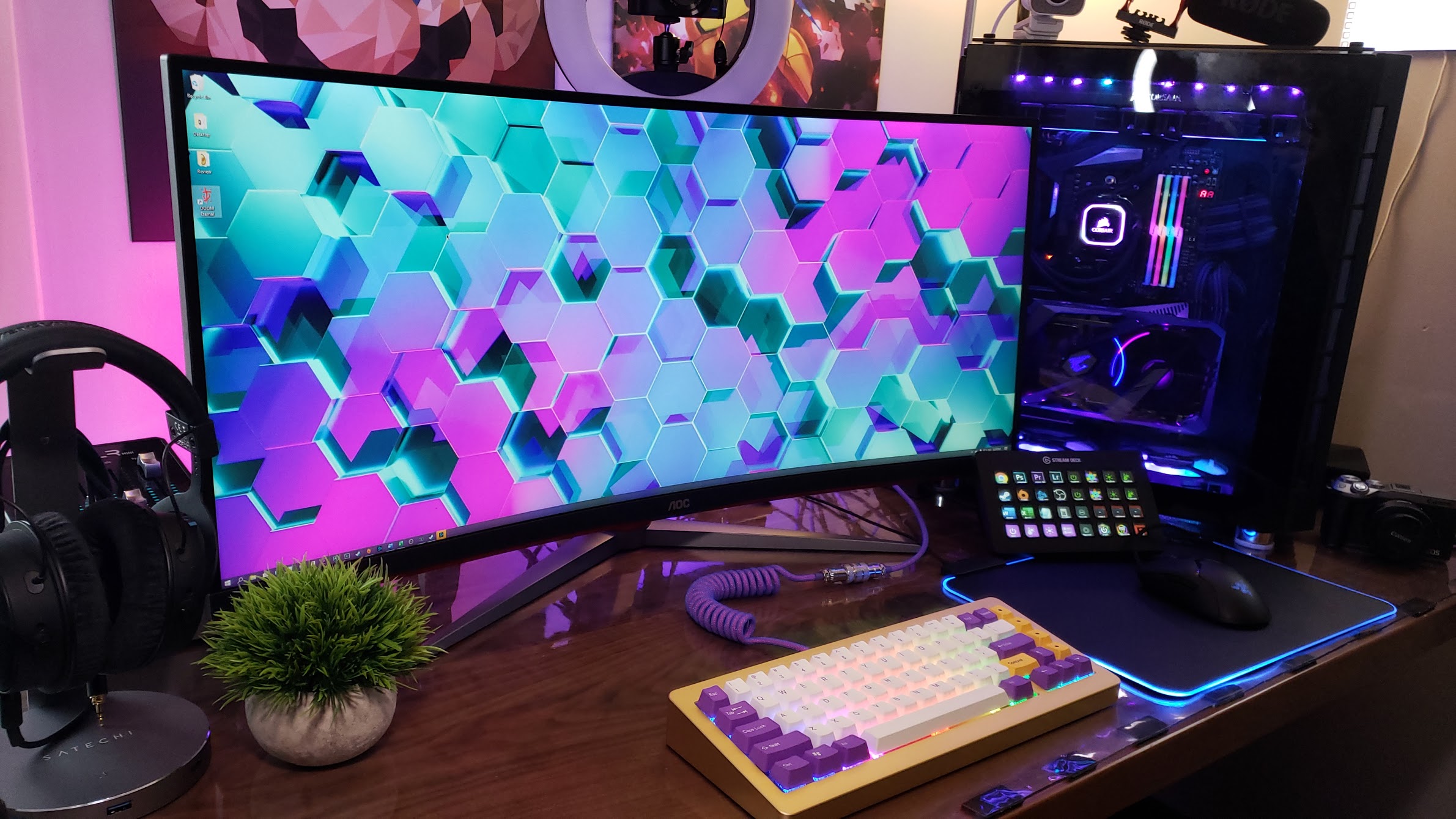 The AOC CU34G2X wasn’t without its issues. The brightness is a little low at 300-nits, and that flashing would have warranted an RMA if it didn’t seem to be fixed. With it seeming to be eliminated, however, the CU34G2X becomes one of the best ultrawides you can buy under $500. Full 10-bit color, HDR support, and 144Hz at 3440x1440 makes for an outstanding gaming experience.

When it comes to ultrawides, you should go in with your eyes open. True, 1000-nit HDR is going to be incredibly expensive when it’s finally available. The same is true with FALD. Even jumping to 400-nits is will cost hundreds of dollars more. Given the low cost of the CU34G2X, I can accept some growing pains and a bit less brightness.

Overall, though I’m not more pleased than ever with the flashing issue seeming to be gone, I would still recommend Nvidia users wait a few days. Should it resurface, I will update this review and its score. If it doesn’t, at least in my case, a simple driver release was all that was needed to correct it.