Known for its gaming monitors, AOC now has its own line of gaming peripherals. Today we're going to be looking at a couple of pieces from AOC’s G500 series - the GK500 keyboard and GM500 mouse. Wedged between AOC’s entry-level G200 and premium G700 line, AOC is marketing the G500 series as mid-tier gear, but with an MSRP of $49.99 and $24.99 respectively, the G500 series has more of a low-tier price. So how is AOC offering mid-tier gaming accessories at such a great price? That’s exactly what I wanted to find out when I swapped out my current gear for the G500 duo a couple of weeks ago.

With the spec sheet out of the way, let’s get back to the question of exactly what quality you are getting with the G500 series. I would say that neither the GK500 keyboard nor GM500 mouse looks like entry-level gaming hardware. I’ve always found that entry-level peripherals are more about adding curves and extra plastic than they are quality and function, possibly to give them more of a gaming console look or feel. While both the GK500 and GM500 have RGB lighting, the rest of their aesthetic is a crisp, clean minimalist look. Both pieces of hardware have a matte black finish, with a thin brushed aluminum edge around the top deck of the keyboard as the only accent present on either device.

The GM500 specs - 8 programmable buttons, 50 million click Omron switches, even something as simple as the braided cable - all speak to a mid-tier mouse in the $30-40 dollar range. So how is AOC bringing the GM500 to market at $24.99? Anyone with a keen eye should have caught the out-of-place hardware in the GM500’s spec sheet - the Pixart PWM3325. 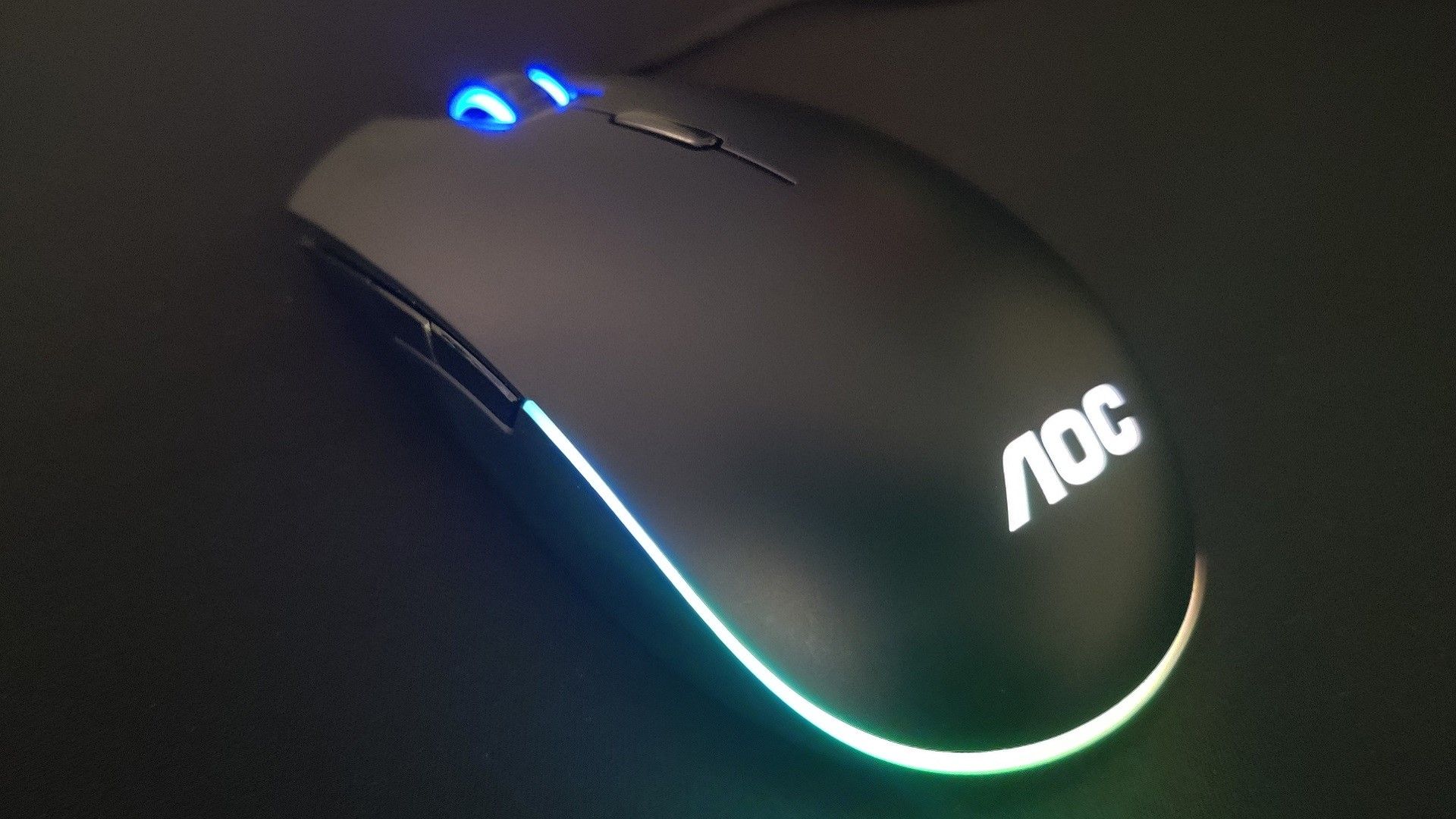 Does that mean the GM500 is a low-quality mouse? No, not exactly. For someone like me who already runs their mouse at a lower DPI setting, the 5000 DPI maximum will be just fine. On the other hand, gamers who play games requiring fast movement with lots of direction changes - shooters for example - may take issue with the lower IPS and acceleration thresholds, as exceeding those limits will cause tracking errors. So if 360 no scopes are in your skillset, the sensor in the GM500 may be a deterrent. Otherwise, you’re getting a mouse with several high-quality options for a bargain price.

Other than the sensor limitations already mentioned, the rest of the GM500 feature set fills out nicely. The GM500 is an 8-button, ambidextrous mouse, complete with two thumb buttons on both sides of the mouse. Whether left or right-handed, this setup does put two of the eight buttons in a hard-to-reach position. You also don’t get a dedicated sniper button on the side of the mouse, but all of the buttons can be reassigned using the AOC G-Tools App, so you could assign one of the thumb buttons to sniper mode.

To the GM500’s detriment, the outer shell has a low-grade plastic look and feel. To top off the cheap look, the matte black finish shows off any oils left behind from your fingertips, leaving shiny spots on the top buttons that have to be cleaned off frequently.

All of that stuff aside, the true measure of a mouse is how it feels in your hand. Bucking the trend of lighter gaming mice, the GM500 comes in at a beefy 145g. The GM500 has the traditional humpback mouse design, and both sides slightly taper inwards as you move from the rear to the front of the mouse. This makes it a good fit for anyone comfortable with a palm or claw grip; I personally found the palm grip slightly more comfortable.

Although the shell looks cheap, the whole mouse is quite solid, withstanding even a strong grip without any bending. During use, the GM500 glides effortlessly across my cloth mouse pad. The left and right buttons had very little flex, requiring only slight pressure and movement for activation.

Like its big brother, the GK700, the GK500 comes packed with plenty of features. Unlike the GK700, there aren’t any extra knobs, dials, or additional macro keys added to the 104-key layout of the GK500, obviously a factor of its cost. The extra features that come with all those extra gadgets aren’t lost, though. Multimedia controls, macros, and limited RGB control are relegated to secondary key presses enabled by the use of the function key. This compromise gives the GK500 a small footprint while still providing the extra functionality found at this price range.

The small footprint is further highlighted by the lack of unused space on the deck; the outer keys are a mere one-eighth of an inch from the edge of the board. I can’t stress enough how much I absolutely love the sleek look of the keyboard, using the RGB lighting instead of extra chunks of plastic to announce the GK500 as a gaming peripheral.

The GK500 also comes with a detachable wrist rest. Held on by four magnets, the rest stays in place well without the need for an added groove in the keyboard. Unfortunately, the wrist rest was a throwaway item for me. Not only did the plastic material not provide any cushion, it was too short and the back edge pushed into the palm of my hands; someone with smaller hands may find it more useful.

The biggest cost saver for the GK500 is in the switches. Although the AOC website lists Outemu Red switches for the GK500, the one I received for review came with Outemu Blue. The Outemu Blue switches are a clone of the Cherry MX Blues, with similar activation force, travel distance, tactile feedback, and clicky sound. I personally couldn’t tell the difference between the switches used here and the Cherry switches used on some of my other keyboards.

As for feel, the keys do have a little wobble when moving your fingers around at a rest state. Even with the stabilizers on both sides of the main switch, the larger Enter and Shift keys had a more pronounced wobble; I didn’t experience the same issue with the space bar. This is my first time using Outemu switches, so I’m not sure if the extra wobble is inherent with Outemu or a product of the GK500 itself. 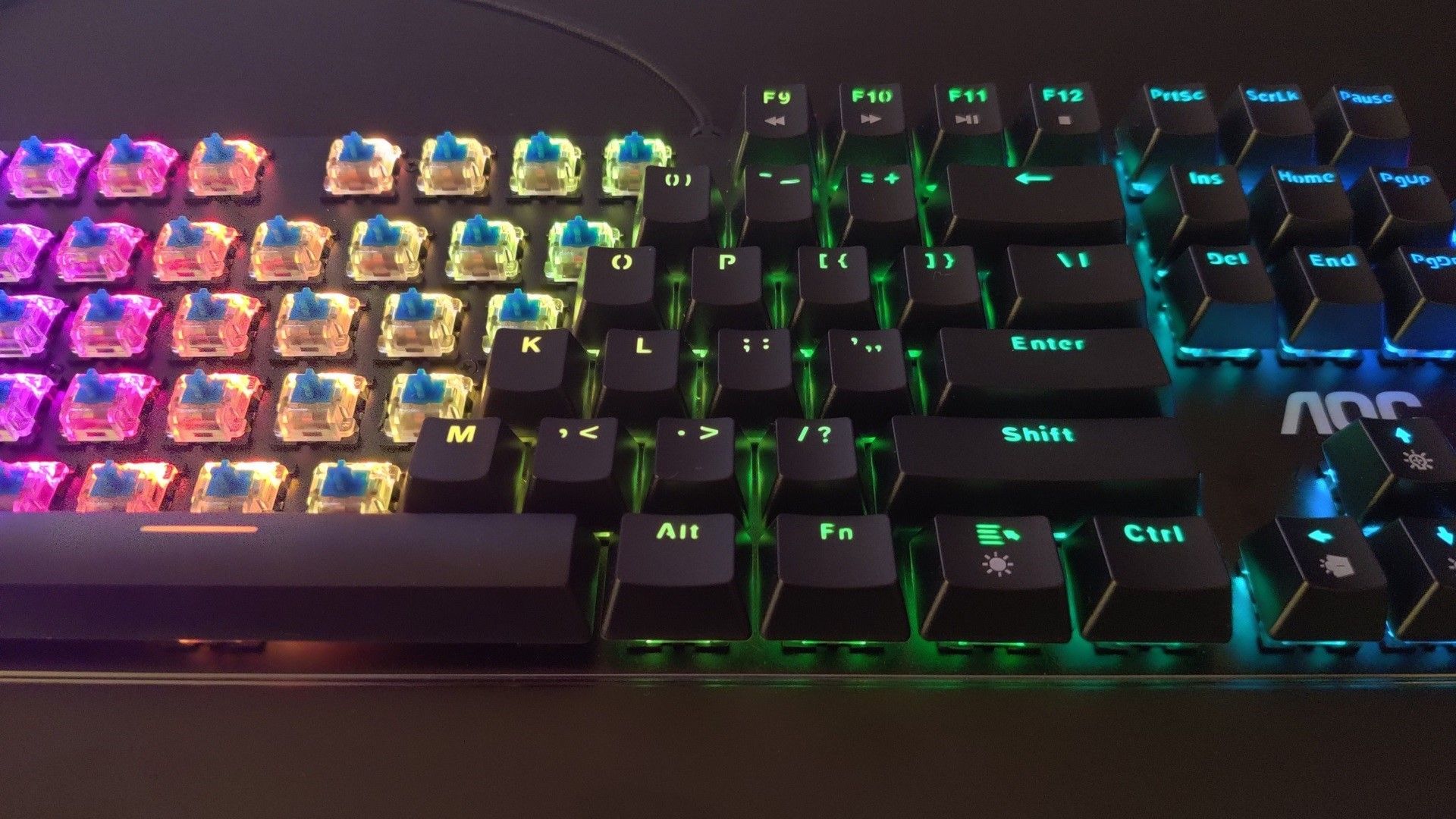 In any event, typing on the GK500 felt good. The deck has a little flex when twisted by its ends, but that didn’t translate at all during typing; even when using an exaggerated force while typing the board felt rigid. Each keypress registered as expected, with full key rollover (a basic 6 key anti-ghosting option can be set in G-Tools) working as intended.

The G-Tools App is a unified solution to control all of AOC’s gaming hardware. For the GM500, it provides functionality to change the mouse’s polling rate (125, 250, 500, and 1000 Hz), adjust the double click speed, toggle and adjust the Windows pointer acceleration, and set the scroll wheel speed. Along with assigning individual button functionality, you can set up to four DPI speeds that can then be cycled through on the fly.

Like the GM500 mouse, the GK500 has the option to set the board’s polling rate, as well as key repeat sensitivity. Macros can also be created and applied to individual keys using the G-Tools macro editor. All keys (except Shift, Win, Fn, and Escape) on the keyboard can be assigned a pre-made or custom macro to replace its default use. Macros can be embedded within one another, can include mouse clicks, and can be edited at a later date. The macro editor is simple to use and can be a great way to add some extra functionality to any program or game. 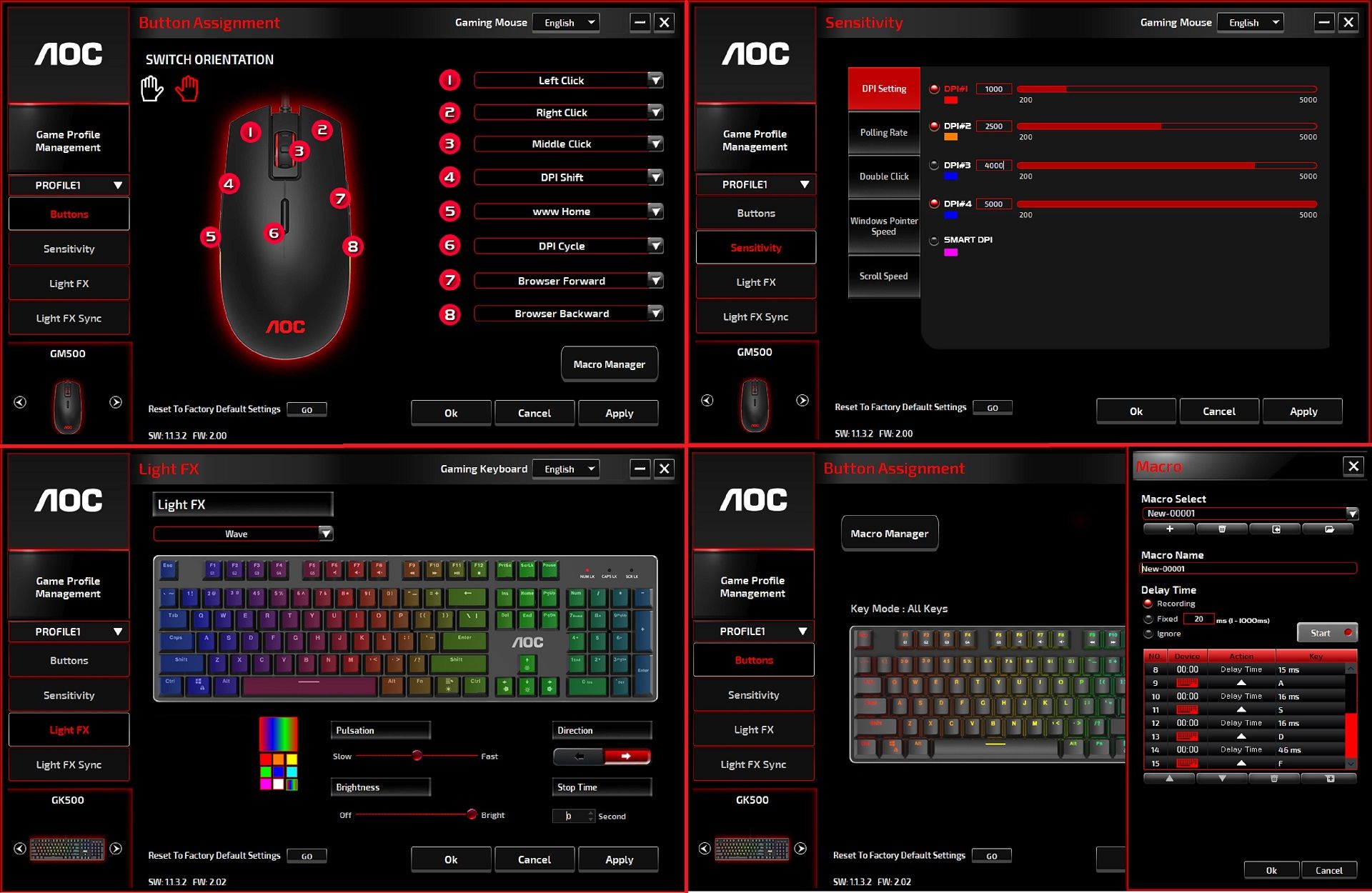 Lighting is also controlled through the G-Tools App. The GM500 has a single light zone with only a handful of preset patterns. The GK500 has a much larger assortment of lighting presets, covering all the regulars such as wave, pulse, and ripple effects. All of your AOC devices can be synched up using G-Tools. For the mouse and keyboard duo, doing so severely limits the lighting options available, leaving on a static color, breathing, and blinking.

You can use G-Tools to create and save up to five profiles for each device. You have to have G-Tools running in the background to switch between profiles, but the keyboard and mouse can each store one profile in their onboard memory.

While reviewing the GK500 and GM500, the keyboard definitely stole the show. Both pieces have a minimalist aesthetic, but only the keyboard pulls the look off well. I’m willing to sacrifice the extra buttons and dials found on more expensive keyboards to maintain that look. And since the extra functionality isn’t lost but merely reassigned, I’m still getting all the features I’m used to at a much lower price. It’s a win-win for me.

As for the GM500 mouse, the verdict is a little less clear. There’s nothing about the look of the GM500 to make it stand out in the crowd. Looks can be deceiving, though, and the GM500 feels much better in your hand than you would first expect. The $24.99 price tag positions the mouse at an awkward spot, a little above the sub-$20 price of low-tier mice and just under the $30-40 price of mid-tier gaming mice. Whether that is a good thing or not really comes down to AOC’s choice to muddle the feature set of the GM500 with the inclusion of a low-grade sensor. It all worked out well for me, but many gamers will probably be willing to pay a few bucks more to get a different mouse with better all-around specs. 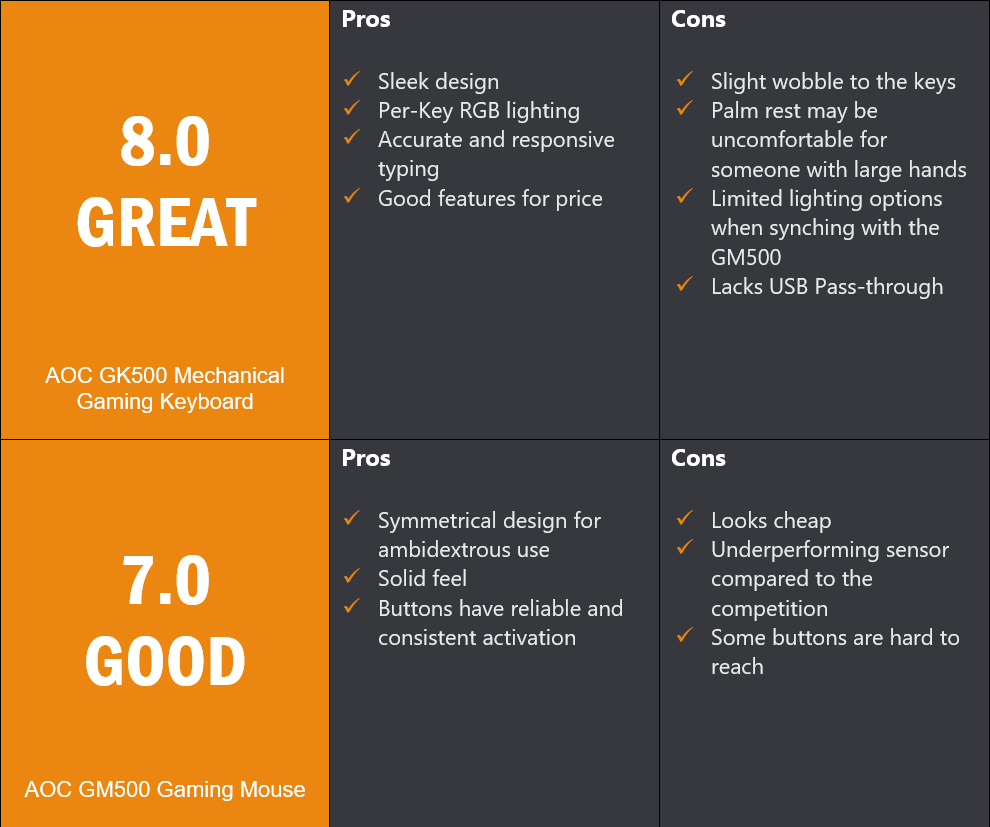