In an unexpected collaboration, Anycubic has used DLP technology from Texas Instruments to produce a new consumer DLP 3D Printer: the Anycubic Photon D2. We've reviewed other Anycubic Photon printers before, but the Photon D2 brings Digital Light Processing to the party with unparalleled precision and a lengthy life span to boot. Keep on reading to learn more about our first impressions of this unit.

If you're unfamiliar with DLP printers as I was, the light source used to cure the resin is one of the key major differences between SLA and DLP printers. The specifics are a little over my head, but SLA printers use a "point-by-point" technique when it comes to curing the resin. However, a DLP printer's projector screen shows off an image of the layer all at once. Since the printer can access an entire layer, all points of the layer can be cured at the same time. There are thousands of tiny mirrors involved in the process, also called Digital Micromirror Devices (DMD) which are responsible for the crazy high level of detail and accuracy. 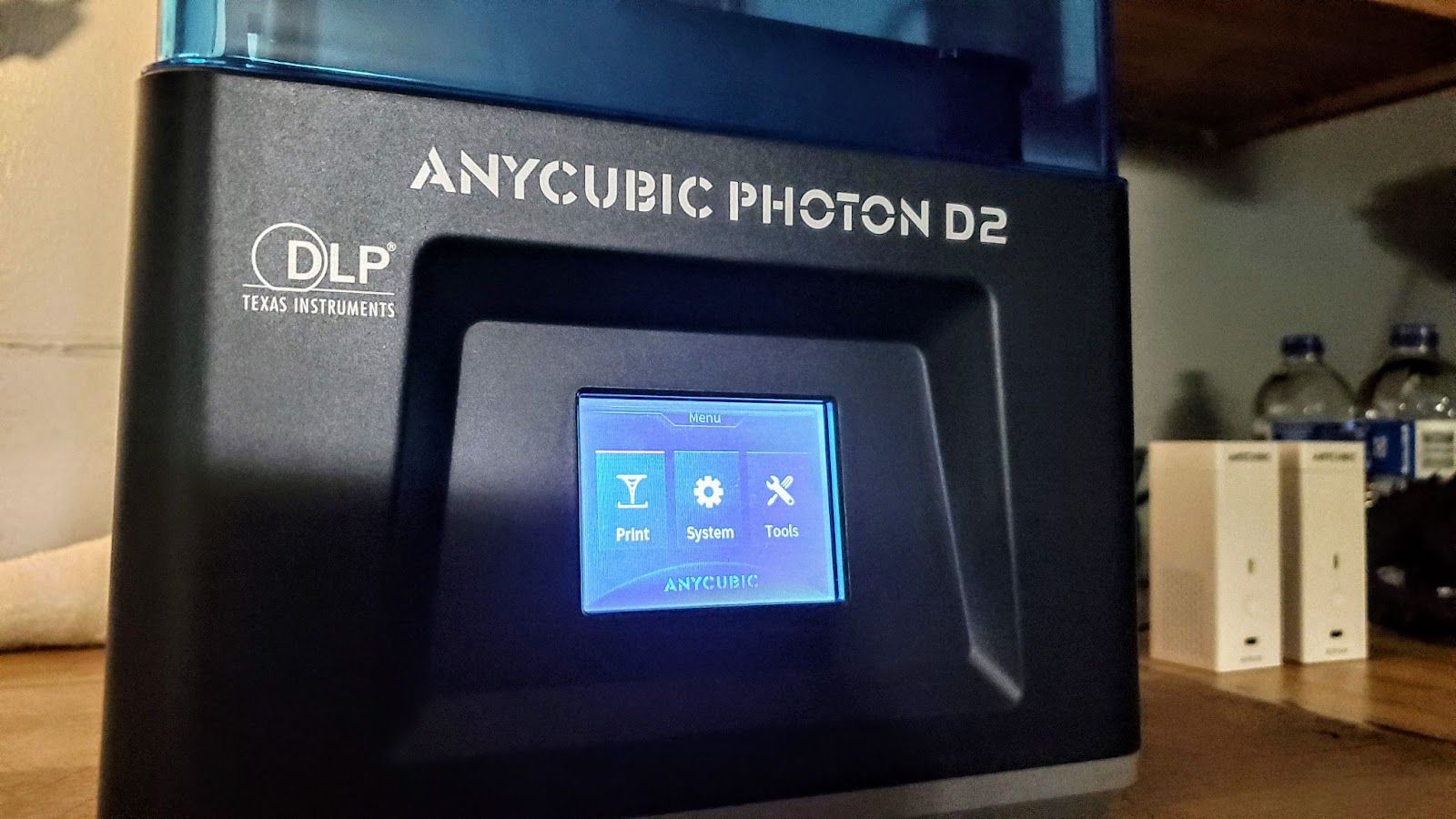 As with most of our products from Anycubic, packaging is always fantastic. They've truly mastered the art of packaging their printers for the long transit, because we have yet to receive any damaged or dented parts. Several layers of foam kept the pieces nice and snug, and the included accessories like the tool kit, mask, glove, funnel, and cleaning cloth are all tucked away inside a reusable plastic storage bag. Assembly was also a breeze. A set of paper instructions are always included, along with a flash drive that has the test file and a PDF with larger pictures. I'm a huge fan of the included PDF instructions, because the pictures are much larger and detailed. I'm a visual person, so the PDF is great for clearing up any confusion I have with the written instructions, and the paper copy is useful for referencing the step as I go about assembly. 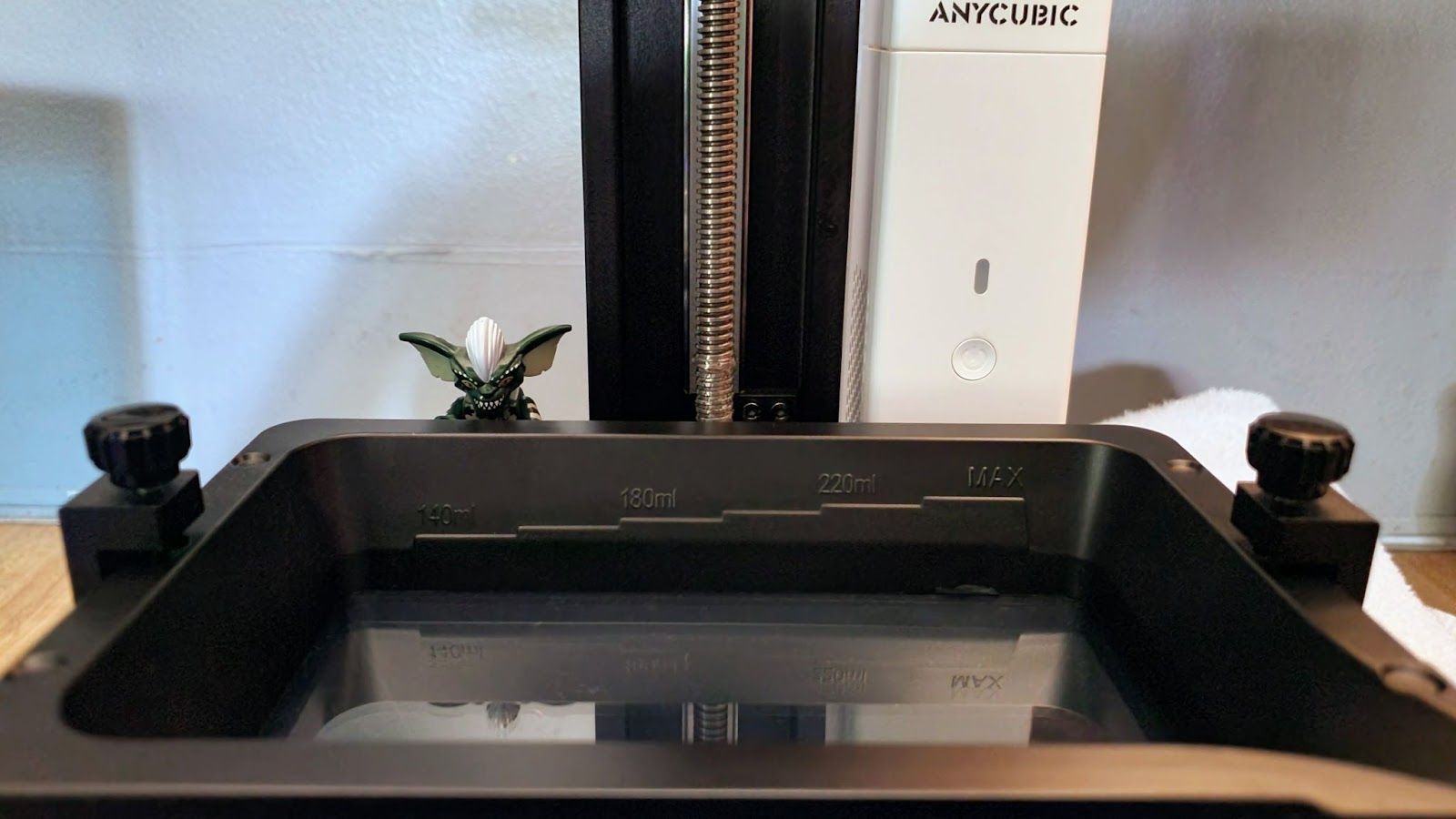 Step one of familiarizing yourself with a new printer, check to see if the unit has any preferred resin type. We learned the hard way that DLP printers need a special DLP resin in order to operate. You don't want to make this mistake, because by the time you realize that you've used the wrong resin...you're probably already an hour or two into the print and you'll have to clean out all the wrong resin. It really puts a damper on your afternoon. The one thing that I dislike the most about resin printers is the cleanup. Anycubic was nice enough to send us some DLP Craftsman Resin, but it just didn't click at the time that any other resin types wouldn't work. It was completely a user error on our part. We were too confident in our abilities and far too excited to start printing that we didn't take the time we needed to look into those specific details. The hubris! Learn from our mistakes, check your printer first.

Once we had the correct resin poured in the Photon D2 vat, it was off to the printing races, albeit a little slowly. The test print had an ETA of 3 hours, so we had plenty of time to do some more research and watch a movie. We were able to do both pretty effectively since the D2 is so quiet. There were a couple of times that I completely forgot it was going, except when I'd hear the occasional hum of the print platform adjusting or lifting. It was a pretty quiet experience overall, because the DLP printer doesn't need a fan to dissipate the little heat that the light source modules give off. The draw of power for this printer is pretty low as well at 15W. It's small, but mighty! I have to imagine that some of the heavy lifting is given relief by how small the machine is (slightly larger than the Photon Ultra) but what it lacks in size it picks up the slack for in detail. 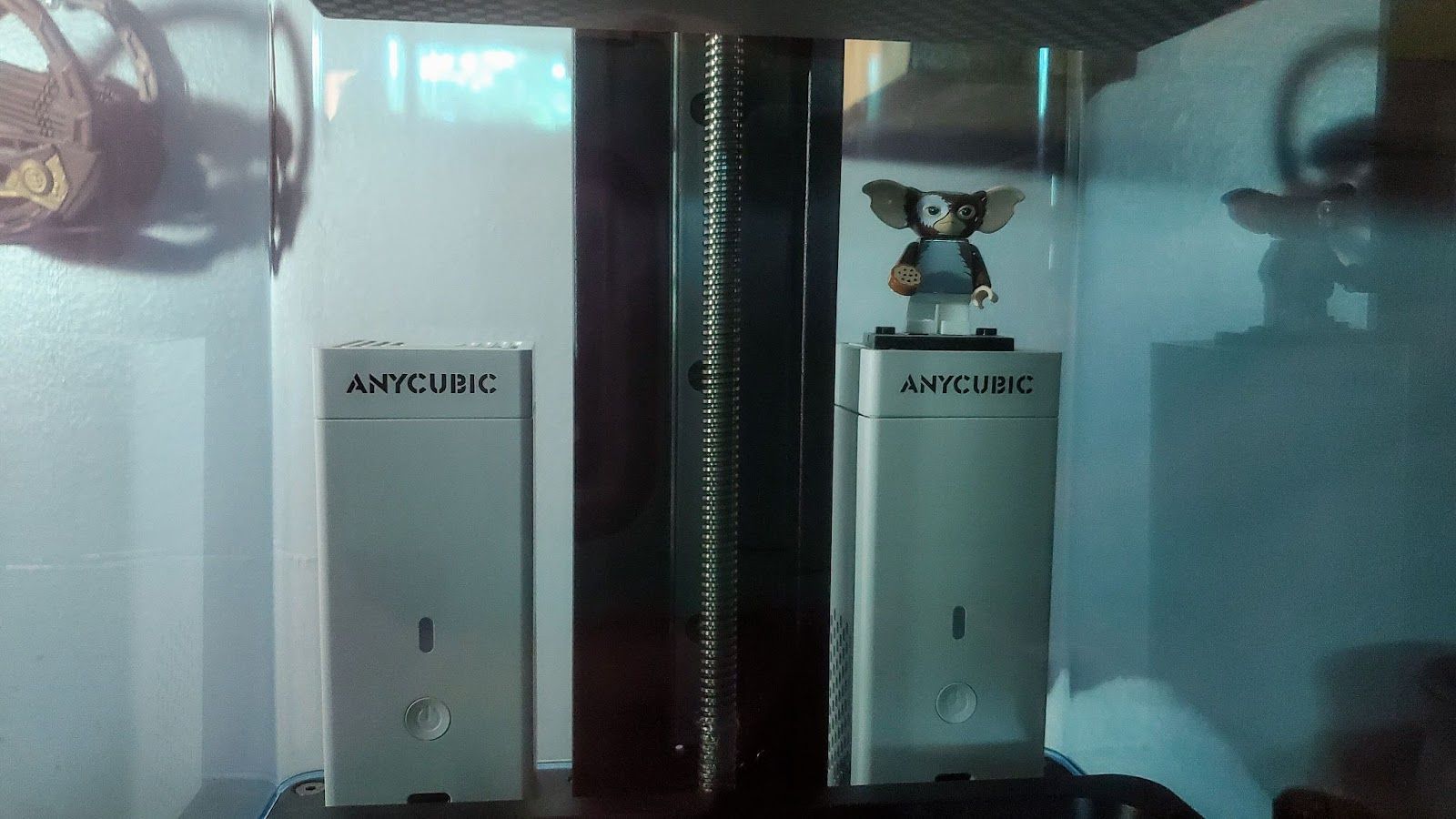 A simple but unique feature that kept catching my eye while we waited was the blue shell. All of our other printers share the same Anycubic yellow color on the shell. However, with this printer having the blue shell, it makes it easily identifiable as our one DLP printer in the sea of yellow. And, it's just a beautiful shade of blue. Easy on the eyes. Can we get a green or red printer type next? I feel the need to complete my color collection. I'm not sure if the color plays any role in the printing process other than aesthetics, but I'm a big fan of it nonetheless. 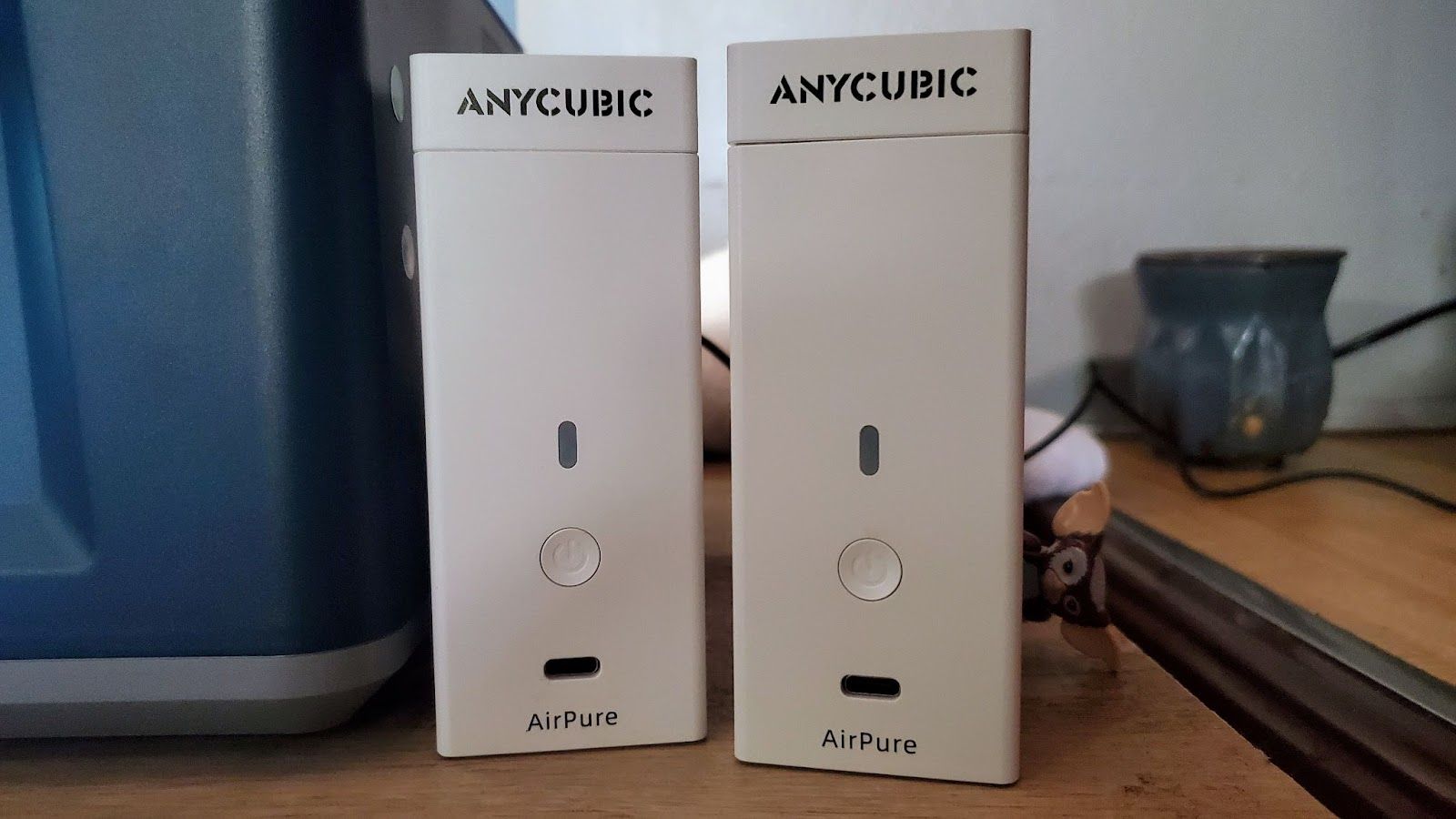 You'll notice that we have two new guests to accompany us with our Photon D2 prints this time: the Anycubic AirPure duo. Since we began our printing journey, both my partner and I began to regularly complain of slight headaches (even with the proper ventilation) because of our small living space. Luckily enough, Anycubic started selling their own brand of air purifiers, and they are the absolute perfect size to fit inside of the Photon D2. One wasn't enough to cover the smell, but both purifiers going at the same time drastically increased our ability to stomach being in the same room while a job was going on. With only a faint whiff of the resin lingering, we're actually able to continue working on other important things...like painting other miniatures we had printed while we waited for the test print to finish. Eventually we'll have to replace the carbon filters (every 3-6 months) but they're a huge help until then. 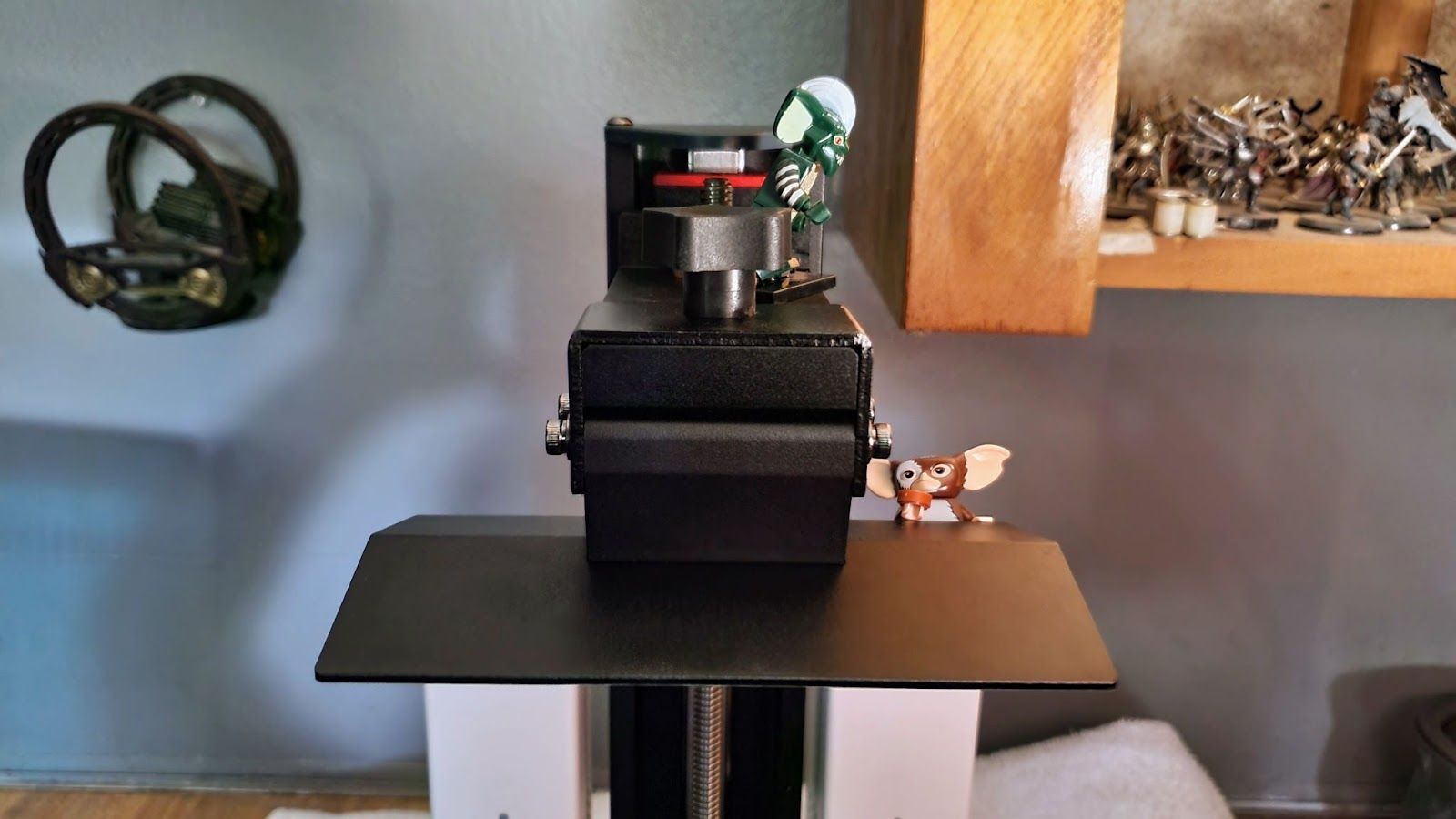 Doing a little further research, we saw that one of the key features of this new Photon model is a 20,000 hour lifespan for the DLP projector. This means that you don't have to consistently replace screens like with an LCD printer, saving you a huge chunk of change down the road. With the cost of just about everything going up, I was pretty excited to learn about the projector's longevity. After all, I just had to replace the filter in my car for almost $100, I really don't want to be shelling out that kind of change for another printer part. 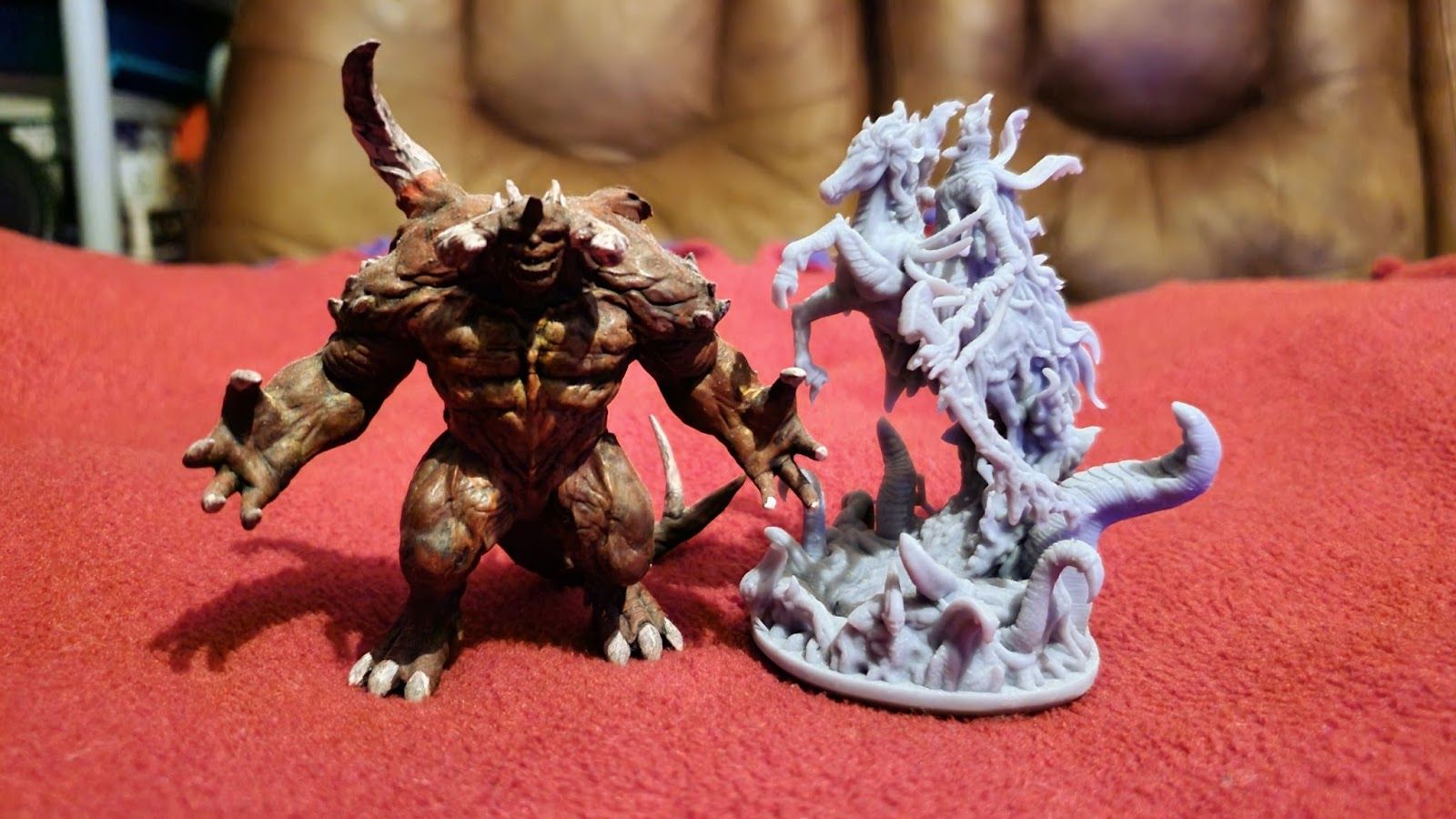 You may be wondering how our initial prints went, and I’d say pretty damn well for right out of the box. The first two failed, as per user error and a few adjustments we needed to make to the settings. Had we paid a bit more attention to the instructions most of our trouble probably could’ve been avoided. It took a bit of tuning till we could get the print to stick to the build plate, which was a little frustrating since this unit advertises that it has excellent grip to prevent those issues. Those issues might be a little disheartening for a beginner to work through, but it’s nothing that some Youtube videos couldn’t walk you through. 3D Printing in general is a frustrating and complex hobby, but it’s also incredibly rewarding once you can figure out a solution to your problem.

As per usual, the elephant in the room is price. The Anycubic Photon D2 is $679 on the Anycubic website, but it seems like a pretty quality investment as opposed to a printer that you may have to replace in a few years. With the impressive light technology, quiet printing experience, and high precision in its prints, I think the D2 is probably ready to give other printers on the market a literal run for their money. It's a fantastic unit for both beginner and advanced hobbyists who may be looking to upgrade the efficiency of their setup. It’s simple enough for a beginner to print with right out of the box, while also offering some nice quality of life upgrades for seasoned printers with other Photon models.