AMD has had quite the year! Not only did we see the release of the Radeon RX 5600XT into the wild in the first quarter, we saw the Ryzen 4000 series explode into the mobile space and the Ryzen 5000-series create a huge upset in the desktop CPU market. Some might call this luck, but in the face of NVIDIA’s RTX 30-series, could AMD’s long-awaited “Big Navi” GPU respond in turn?

Strap in, because this is one of two articles on the AMD Radeon RX 6000-series, covering the RX 6800 within this article. We will be covering the RX 6800 here. Because of the shared architecture and similar features set, some of the information will be shared across the two reviews, with the lion’s share of nuance found within our benchmarking section and final

After a long wait, we are about to find out if 2020 is AMD’s year for supremacy or if we are left wanting a little more from Big Navi.

AMD has been very open about its multi-year roadmap for its Zen processors and RDNA GPUs. With each announcement and each iteration, Dr. Lisa Su voiced AMD’s love for gamers and its commitment to make AMD the ultimate platform for gaming. And that has been quite evident in the past year. Whether gaming on a console or PC, AMD has made a strong for itself, especially when it comes to CPUs. 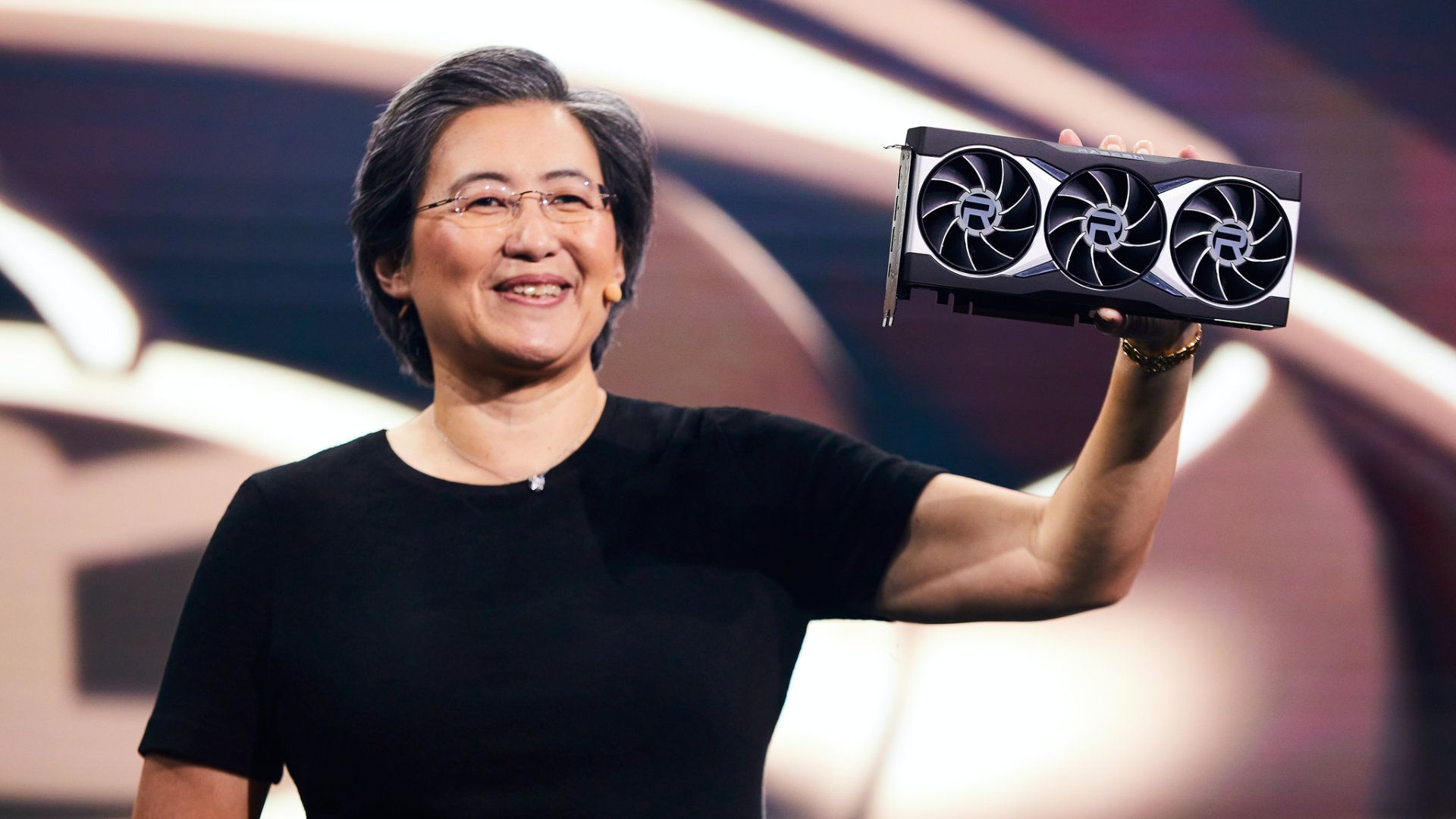 With the release of the Radeon RX 5000-series, AMD created the RDNA architecture - effectively called Navi. Navi-based GPUs maximized performance per watt over the previous generation and did something pretty incredible in a market of extremes: it offered an affordable GPU upgrade path for users looking for raw performance boost in rasterization. However, RDNA was missing some key features that consumers wanted: 60 frames per second (or greater) at 4K resolution and real-time ray tracing.

As it continues to move further along its roadmap, AMD’s Radeon RX 6000-series improves upon the RDNA formula with RDNA2. Utilizing the same 7nm process, RDNA2 packs in double the Compute Units, increases the clock speed frequencies, and offers a feature never before found in a GPU architecture: a L3 caching system.

With the power efficiency of the Infinity Cache and the lower memory latency it provides, AMD is able to push clock speeds into blistering new heights while keeping the GPU’s power needs below 300W on the higher end of the RDNA2 product stack. And all of this spells good news for the features missing from RDNA’s maiden voyage. After all, AMD has promised with RDNA2 is to deliver higher performance per watt and than RDNA while making the RX 6000 series the go-to platform for 4K gaming. We will get into that more in-depth in our benchmarking section. 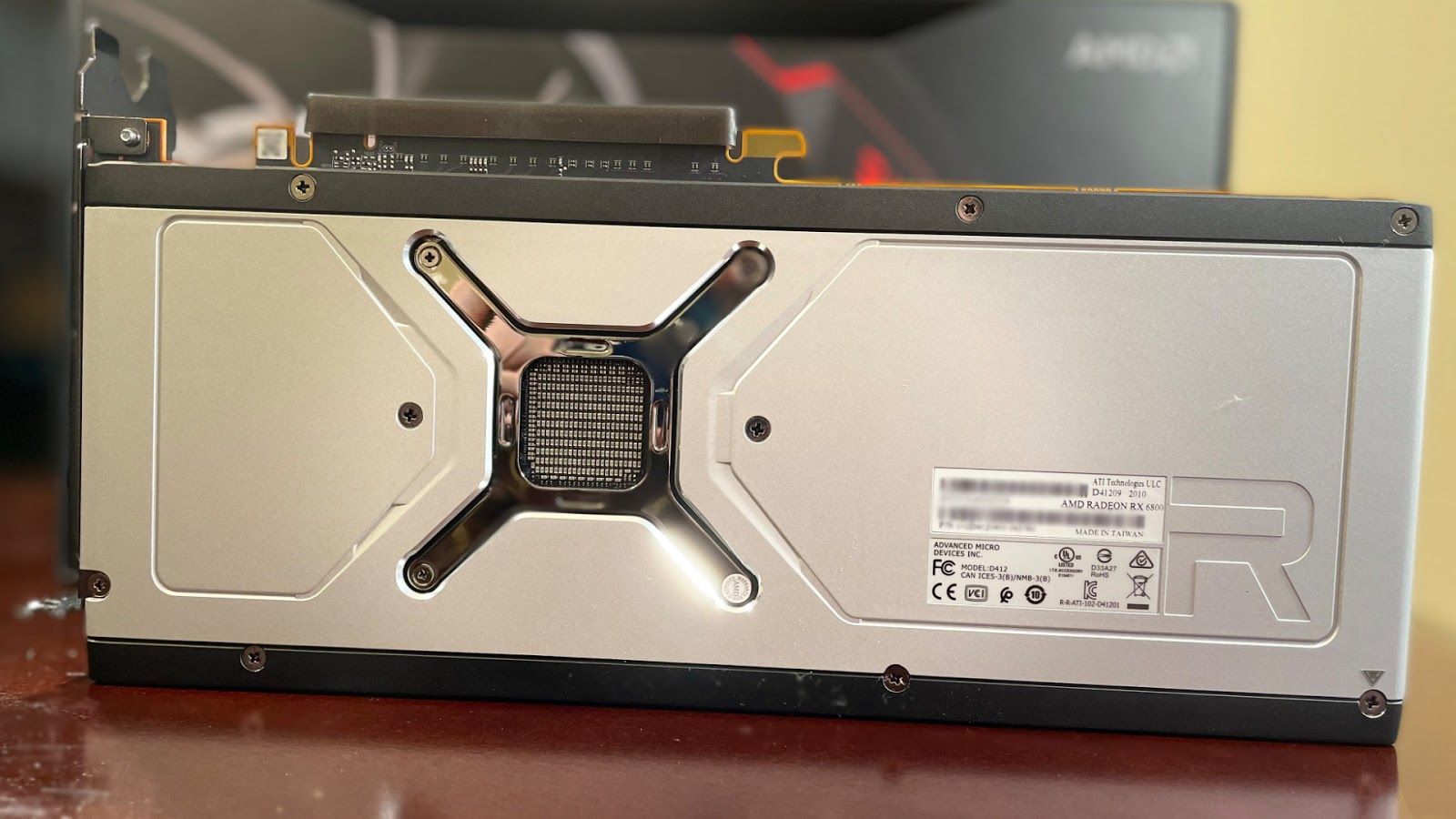 When it comes to ray tracing, AMD’s philosophy has been this: to work with existing tools to enable more developers the ease of use for the platform (such as DXR/DirectX 12 Ultimate, Vulkin, etc.) while providing the hardware to support it. With that in mind, each RDNA2 GPU contains 1 ray accelerator per compute unit within the architecture. The ray accelerators working in tandem with compute units for features like ambient occlusion, denoising, and variable rate shading.

By working within this framework, AMD believes that it can strike a balance between visual fidelity and performance, but they do recognize the burden that hardware-based ray tracing put onto a GPU. Where NVIDIA has improved their RTX experience with Deep Learning Super Sampling (DLSS), AMD is prepared to answer with FidelityFX Super Resolution. While the technology is not fully integrated at this point, AMD is working to release it in the near future.

But that isn’t all. Remember Dr. Lisa Su’s comment about AMD providing the ultimate gaming platform? It wasn’t just about high performing CPUs and GPUs, but the synergy between them. Taking a page from their mobile platform playbook, AMD is bringing a feature called Smart Access Memory to Ryzen 5000-based systems. By utilizing the speeds of PCIe 4.0, Smart Memory Access gives the CPU access to the GPU’s memory, removing I/O bottlenecks to increase performance. According to AMD, this technology can increase performance at 4K by an average of 6%.

With all of this put together, RDNA2 is poised to cause an upset in the upper end of the GPU market. Let’s see just how it performs in practice.

For our testing, we will be looking at data collected from benchmarks across a series of tests which utilize a diverse range of APIs. This will give a broad overview of how the RX 6800 will perform.

Within our charts, you will see MSI’s Radeon RX 5700XT Gaming X and the RTX 2080ti Founders Edition GPUs to show the top tier GPUs from the previous generation product stacks alongside offerings from the RTX 30 series. Since we are dealing in mid-range territory, we will be focusing our 30-series comparisons with the RTX 3070. We will include the RTX 3080 to look at the product stacks as it currently exists within the market. Standing in for the 3070, we have NVIDIA’s Founders Edition and for the RTX 3080, we have the GIGABYTE RTX 3080 Gaming OC 10G. You will also see numbers for AMD’s Radeon RX 6800 XT in our charts, but we will be focusing on those in an article of its own.

It is also important to note that these comparative numbers are not using AMD’s Smart Access Memory. Smart Access Memory opens up CPU access to GPU memory when a Radeon RX 6000-series GPU is paired with a Ryzen 5000-series CPU. The motherboard for our test bench did not have a BIOS update available at this time of the review.

With all of that out of the way, let’s jump in. 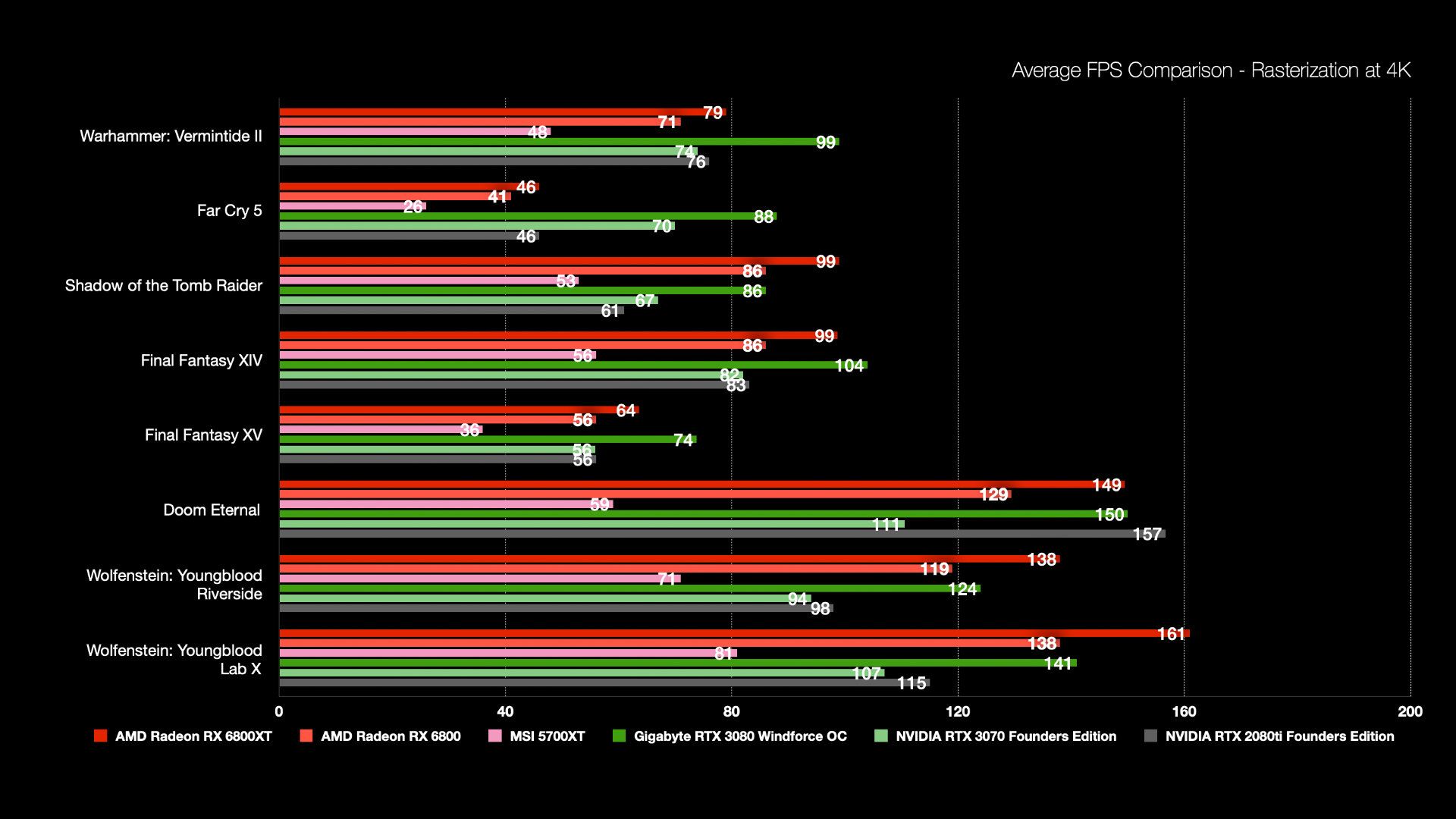 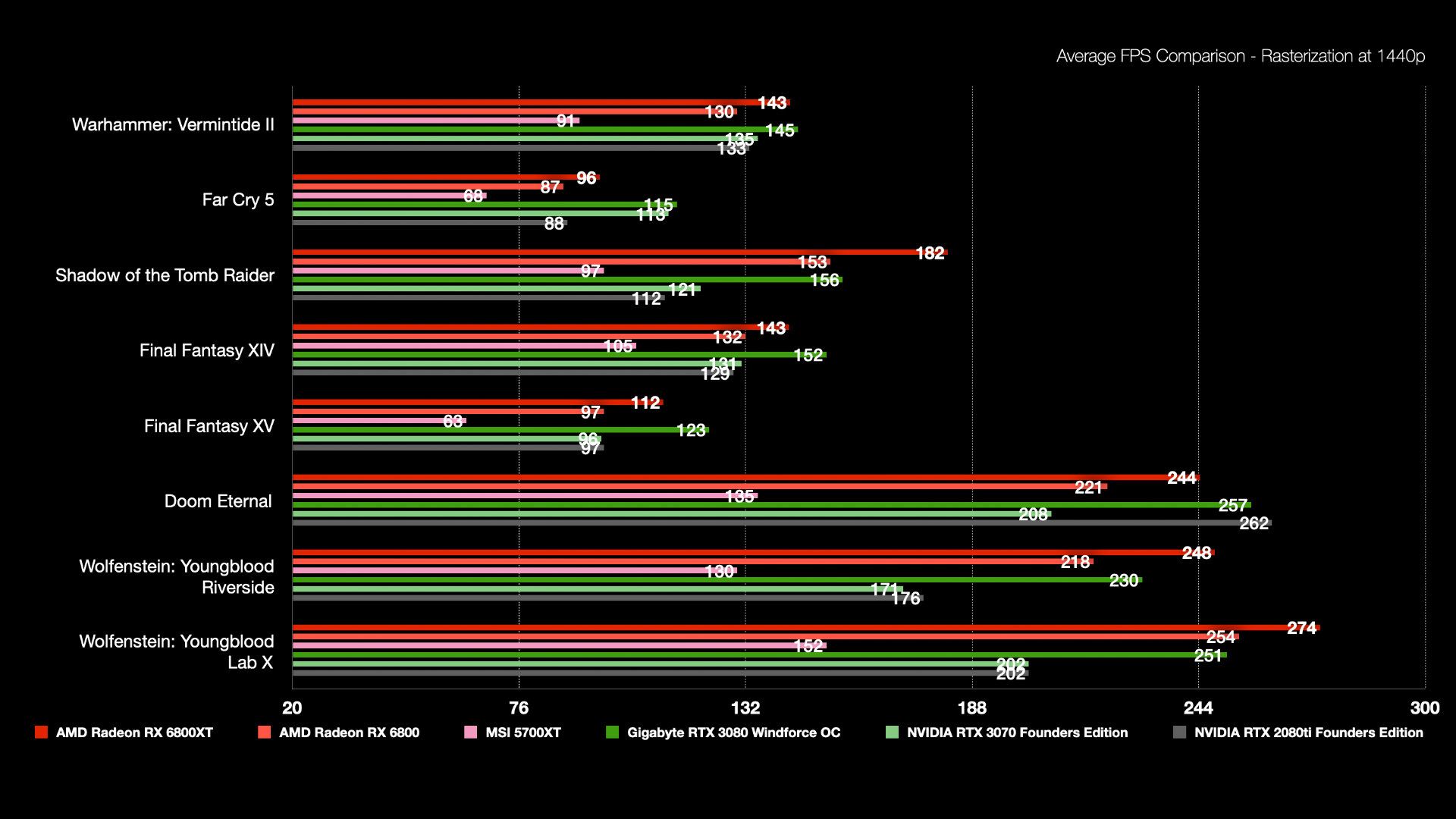 One of the big performers for the RX 6800 was Wolfenstein: Youngblood which performed between 25 - 28% better in both 4K and 1440p than the RTX 3070. However, it is Shadow of the Tomb Raider where we see the RX 6800 step onto NVIDIA’s territory and go toe-to-toe with the RTX 3080 in average FPS. Not too shabby for the little Big Navi! 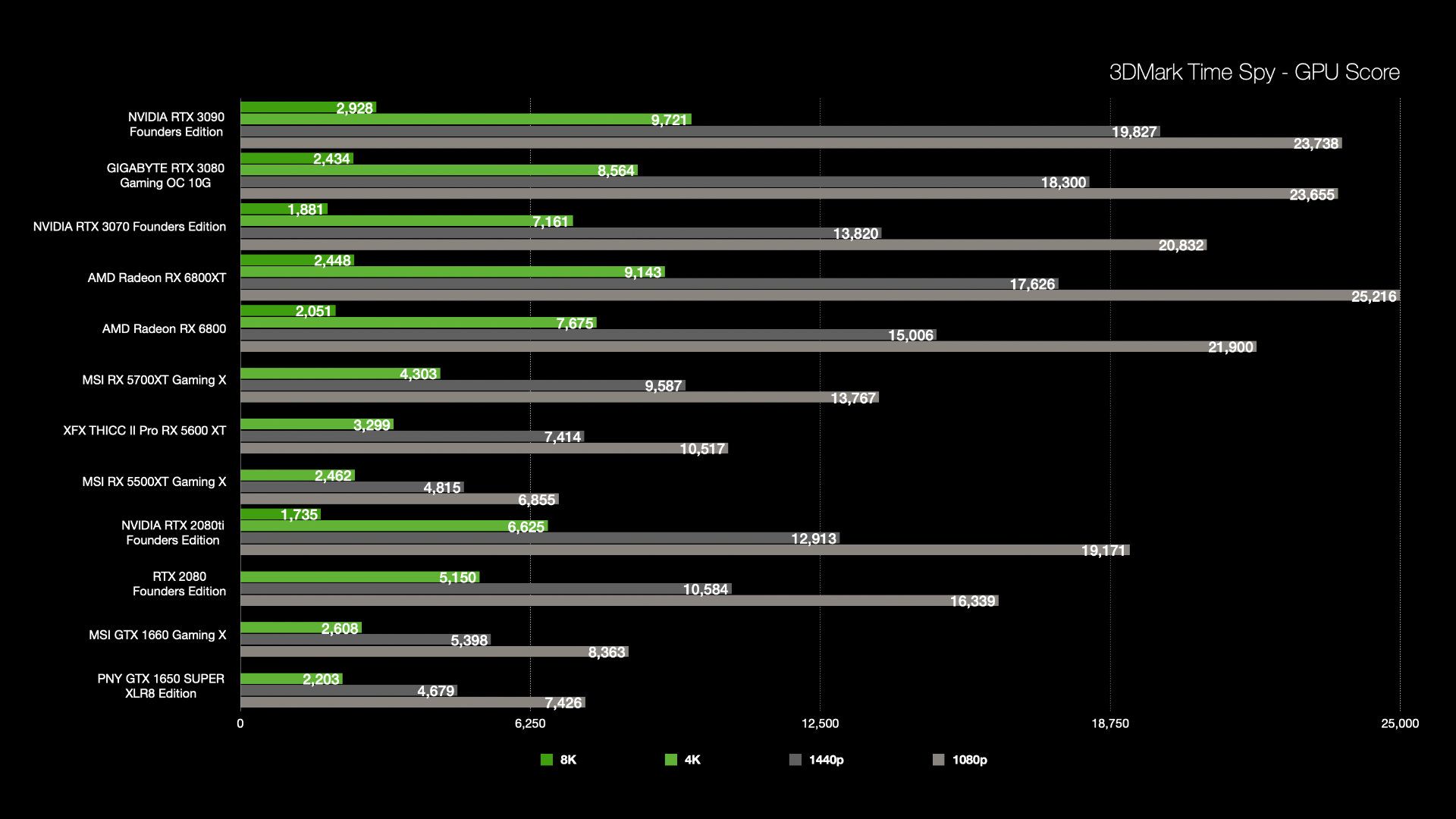 With all of this in mind, the question remains: can it ray trace?

As mentioned above, AMD’s approach to real-time ray tracing is vastly different than NVIDIAs. Whereas NVIDIA’s approach is a little more boutique, AMD’s preference is to work within the sandbox of tools largely available to developers, hence their ray tracing support with DirectX 12 Extreme (or DXR) and Vulkan. As a result the tests that overlap are limited for the time being. However, we do have a few titles that highlight the state of real-time ray tracing performance. 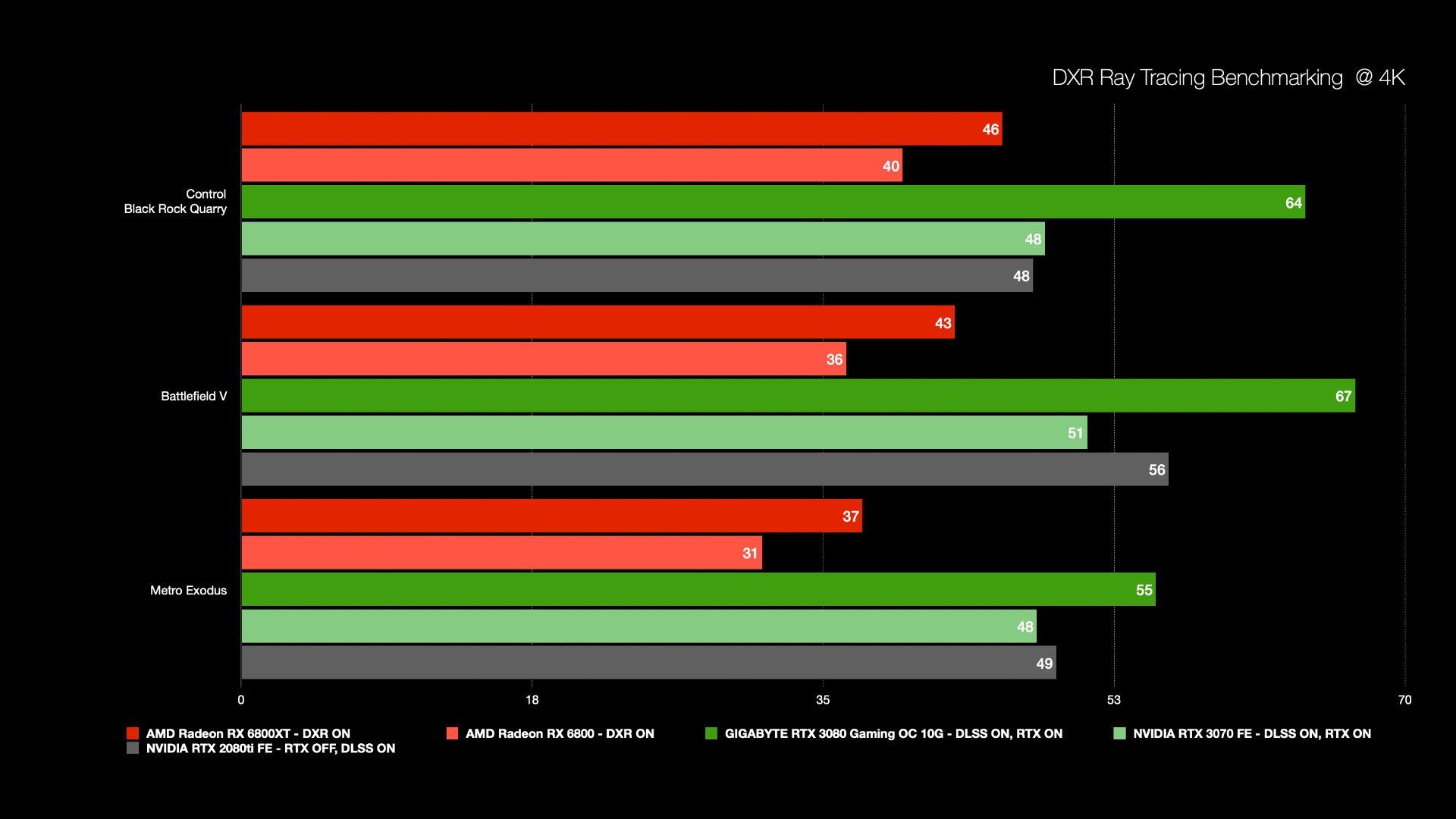 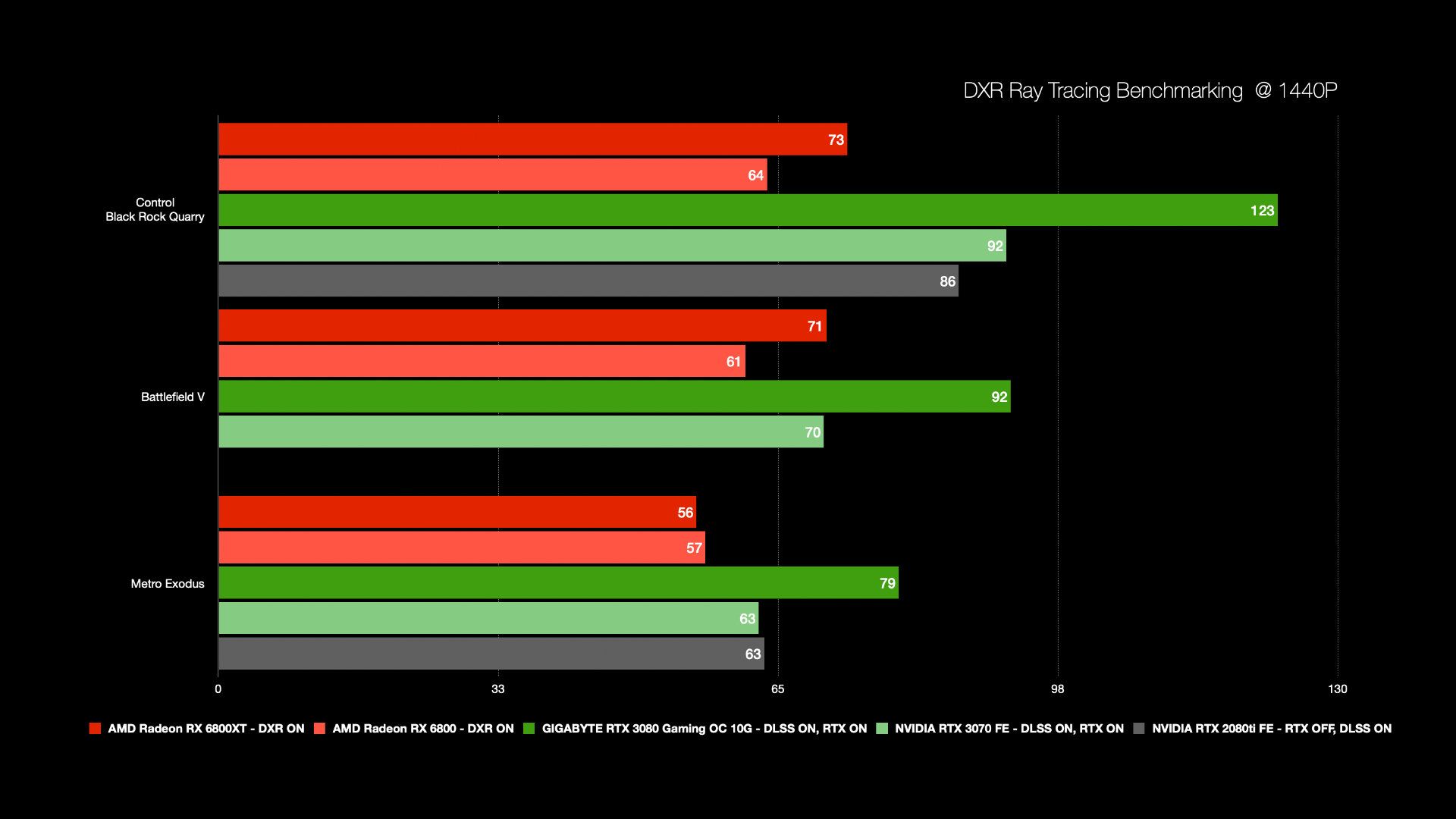 At 4K, the RX 6800 struggled to keep up to the competition at 4K. The story is similar at 1440p, but the RX 6800 tries to make a case for itself at 1440p, averaging around 60FPS with ray tracing enabled. While this does not look great for the RX 6800, there is another side to this story: The data collected from the RTX 20- and 30-series GPUs within these charts include the Performance Mode uplift from DLSS 2.0.

As things stand, the RX 30-series does outperform the RX-6000 series, but it has significant help. When AMD’s FidelityFX Super Resolution fully releases into the wild, we could see widespread adoption across the gaming APIs, with or without the presence of real-time ray tracing, giving a performance bump all around.

With a cooling design reminiscent of NVIDIA’s RTX 20-series, the RX 6000-series does what it has been doing the entire time: improving upon performance… at least, over the previous generation. The acoustic performance of the RX 6800 is decent. While the fan noise was not any louder than normal case fans, it was noticeable when the fans were about to ramp up. It isn’t unpleasant, but it is not quite. 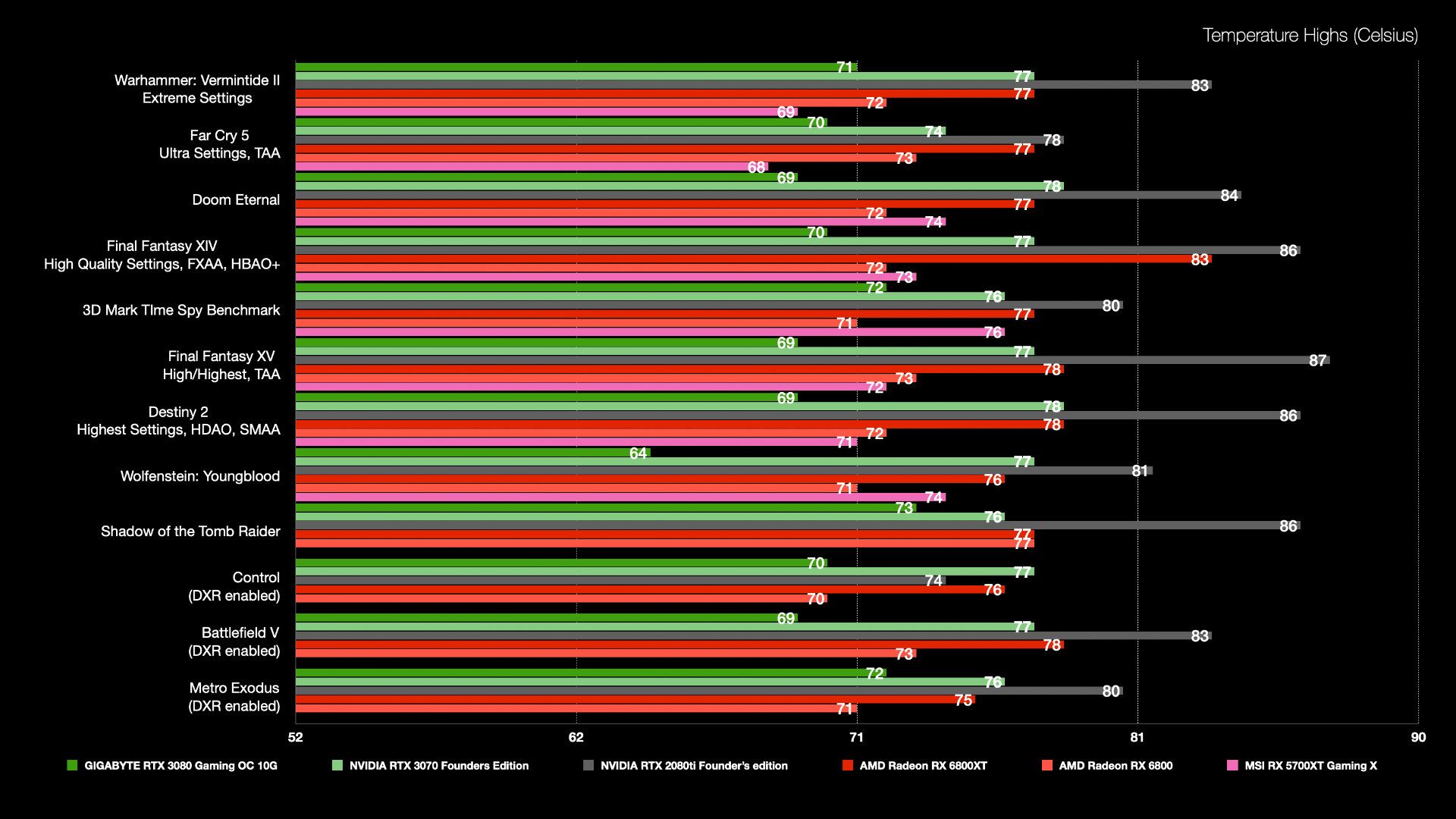 The RX 6800 we received from AMD did manage to surpass the cooling capabilities of MSI’s RX 5700XT Gaming X, keeping temperatures managed in the low 70C range. We did have a few moments where we saw the RX 6800 peak at 77C, but we never did quite see it go above 80C range.

While Big Navi represents a huge swing at the competition, the Radeon RX 6800 feels like it might get lost in RDNA2’s product stack, much like the RX 5700 did in the previous generation. While it does overtake the RTX 3070 in rasterization performance at 4K, it just cannot hang in DXR situations just yet. However, if 1440p is your aim, then the Radeon RX 6800 hits the mark. And that seems to be AMD’s target performance point for real-time ray tracing at the moment for both the RX 6800 and RX 6800 XT.

Much like the 6800 XT, right now, AMD does not have any “secret sauce” helping boost their performance with real-time ray tracing. That isn’t necessarily a bad thing, performance can only go up from here when you have a GPU that can pull these numbers unassisted. We saw a similar situation with NVIDIA’s 20-series when the first RTX titles were released. AMD’s forthcoming FidelityFX Super Resolution solution could be the ticket to enhancing performance, much like DLSS 2.0 has done for RTX.

Coming in at $579, the Radeon RX 6800 is in an odd place. AMD gave us a mid range GPU that can hang with their competition in raw rasterization performance, but the price delta between the RX 6800 and the RTX 3070 gives me a bit of pause. At the current price, consumers are being asked to take an $80 gamble that AMD’s forthcoming  FidelityFX Super Resolution technology will receive wide-spread adoption and that its performance gains in applications will exceed that of the competition.

That being said, AMD does not seem content to just play catch-up with RDNA2. The architecture behind the RX 6800 seems to suggest AMD’s desire to push GPUs beyond their current use. With the possibilities Smart Access Memory promises in terms of CPU/GPU synergy and how developers might take advantage of the Infinity Cache, the RX 6800 could be the little Big Navi that has dormant potential for greater performance in the future!

The product discussed in this article was provided by the manufacturer for the purposes of review.
8.0Great
Pros
Cons
Tags
PC Building
amd
radeon
GPUs