The Akko ACR Pro Alice Plus is one of the most interesting keyboards we’ve ever reviewed. It features an unusual looking ergonomic Alice layout, excellent ASA keycaps and switches, Custom tape for applying the tape mod, and one of the bounciest gasket mount implementations we’ve seen. It retails for only $129.99 direct from Akko, and is one of the easiest, most cost-effective ways to try the Alice layout. Is it worth changing over from your current keyboard?

Akko ACR Pro Alice Plus - What Is It?

The Akko ACR Pro Alice Plus is a second-generation ergonomic customizable mechanical keyboard. It’s an upgrade from the original Alice in that it comes in white or black, as well as translucent, a polycarbonate plate pre-installed, and custom fit tape to apply the tape mod to further customize its sound.

As the name implies, the ACR Pro Alice Plus is an acrylic keyboard. While the original was available only in translucent, this new version offers two painted variants in white and black. Akko refers to these as “spray painted,” but I think that phrasing does the keyboard a disservice. I was sent the white version and the paint job is so smooth and consistent, I could almost believe the plastic itself were white. Still, watch out for sharp objects that may cause scratches in the finish. The keyboard also has a colorful weight around the back that looks great on the white. 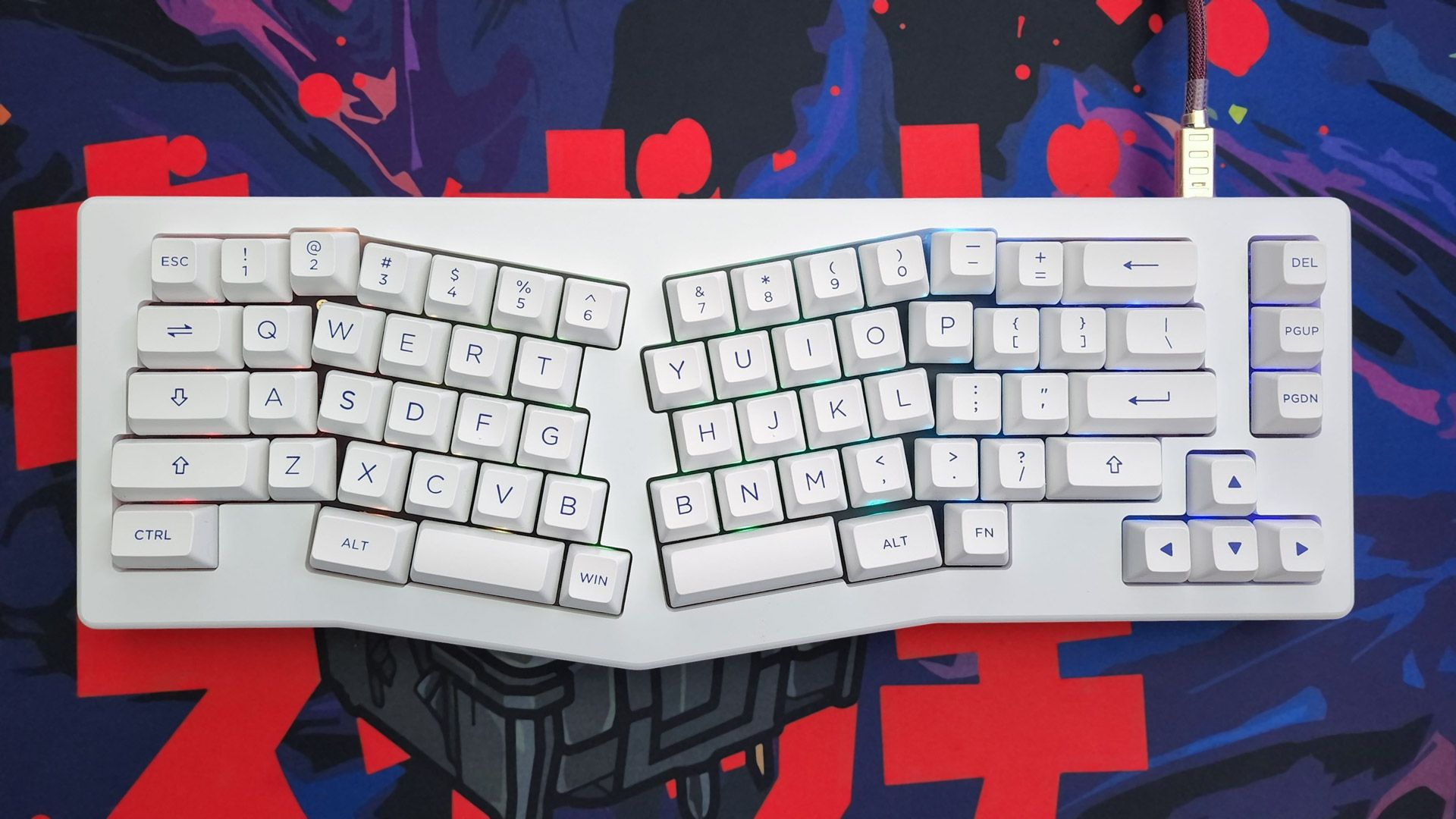 The layout is really the star of the show here. In terms of button count, it’s most similar to a 75% keyboard. You have a function row, arrow keys, and three nav keys along the right side. But, it them separates and angles both halves of the keyboard similar to the classic Microsoft Ergo. This layout allows you to keep your hands at a more comfortable angle when typing and reduces the chance for repetitive stress injuries you might incur on a standard layout keyboard. There are even two space bars so you have quick access akko

With so many missing keys, you may find yourself reaching for a button that’s not there. That’s where the Fn button comes in. Akko has mapped a wide array of secondary functions to the keyboard, including media and lighting controls, as well as navigation and editing buttons. Fn+P is Print Screen, for example. Fn+> and Fn+< are to raise and lower volume. Fn+Page Up and Fn+Page Down are Home and End. You get the picture.

The keyboard looks amazing no matter which version you choose. I was sent the white version, which includes a complete set of white and blue ASA profile keycaps (extras are in the box). The black version uses black and pink keycaps. Neither option is shine-through, but they both look incredible. They’re also very robust. They’re made of doubleshot PBT plastic, so will never fade. They’re also very thick, so have a pleasing sound and feel to type on.

Underneath those keycaps, is your choice of Akko Crystal or Akko Silver switches. They’re both linear and come with light pre-lubing right from the factory. They’re very smooth, highly responsive, and sound great without any modding. You can also pull these switches and try new ones easily thanks to the included hot-swap sockets. There’s no soldering needed to install new switches in this board, making trying new options very easy. 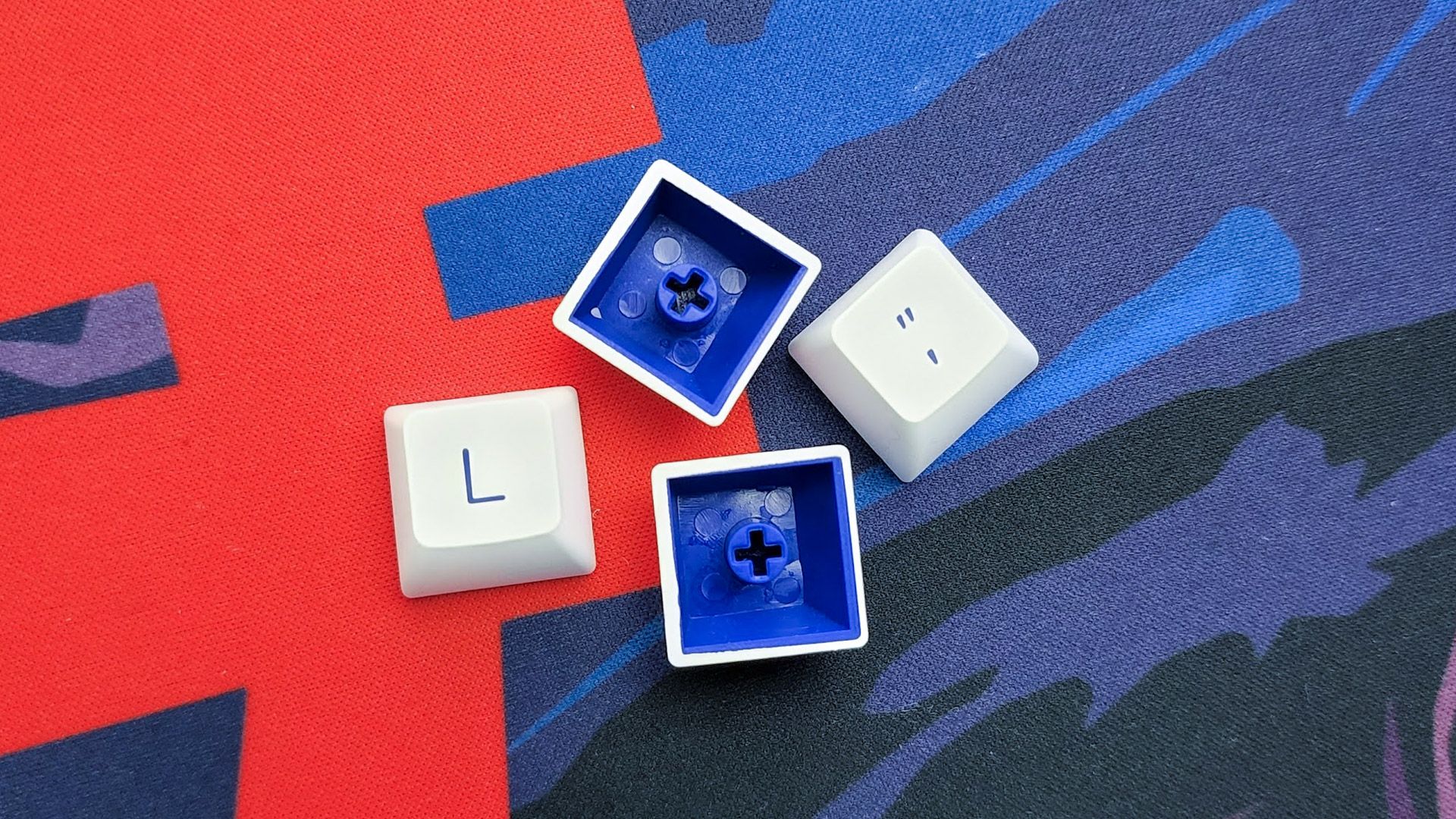 Akko also deserves kudos for its excellent job on the stabilizers. They’re plate mount, so easy to remove and mod, but had absolutely no rattle on my sample. They sound great with the ASA keycaps — one less thing to have to touch up yourself, and that’s great to see on a board at this price.

Inside the keyboard, those switches are installed on a flexy polycarbonate plate and is gasket mounted into the case. The gasket mount implementation is very well done. The gaskets are silicone, not foam, are are a bit stiffer than the usual PORON we see. They’re mounted into set recesses along the edges of the case, however, which allows for a ton of flex. 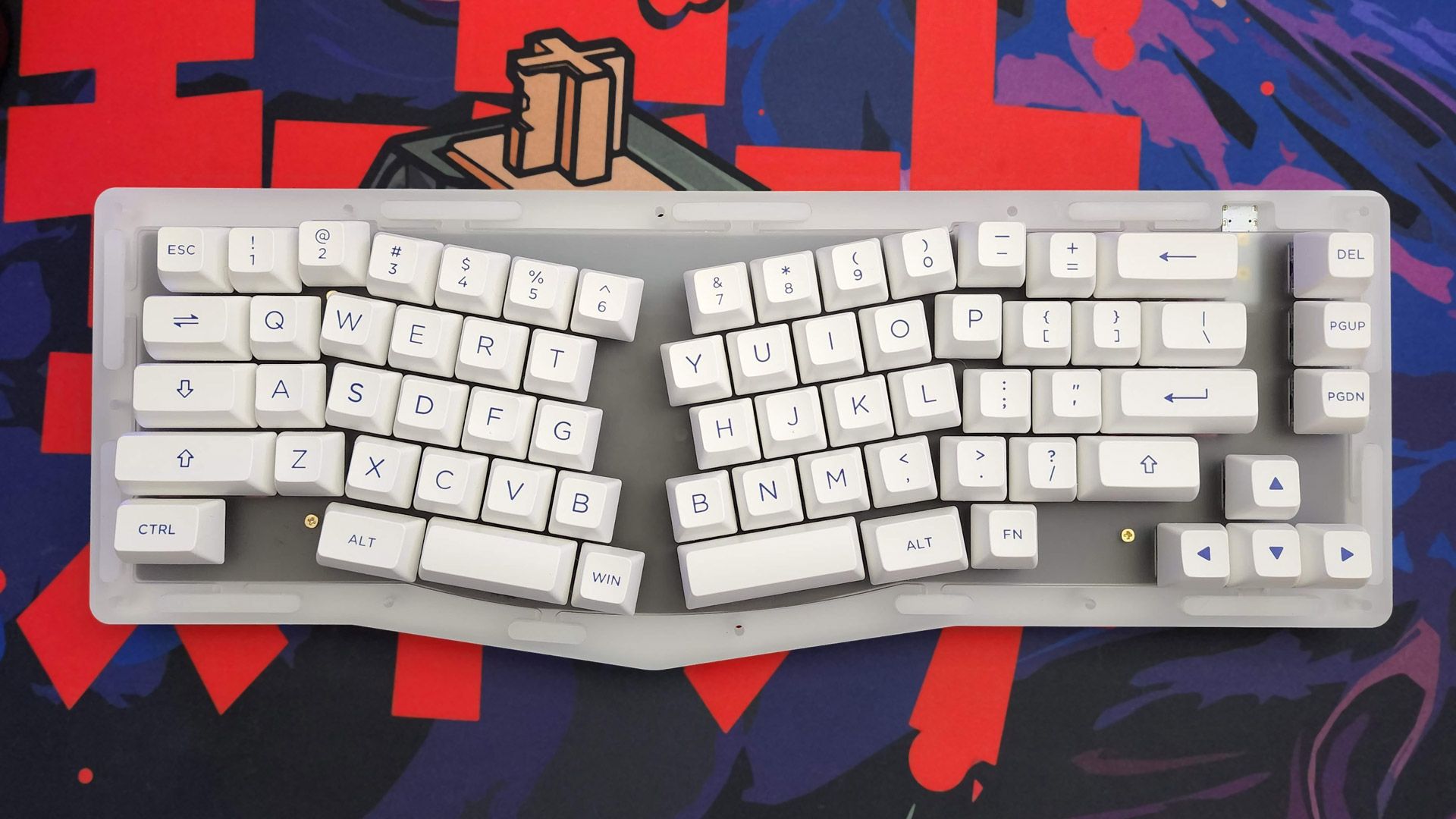 The ACR Pro Alice Plus is, hands down, the most flexy keyboard I’ve ever used — and I’ve used lots with similar mounting structures. There’s enough bounce here to easily see and feel when typing normally. You don’t need to press hard to see the board move. You can even feel that springiness beneath your fingers while you type, which is a neat sensation that has kept me coming back for repeat typing tests. 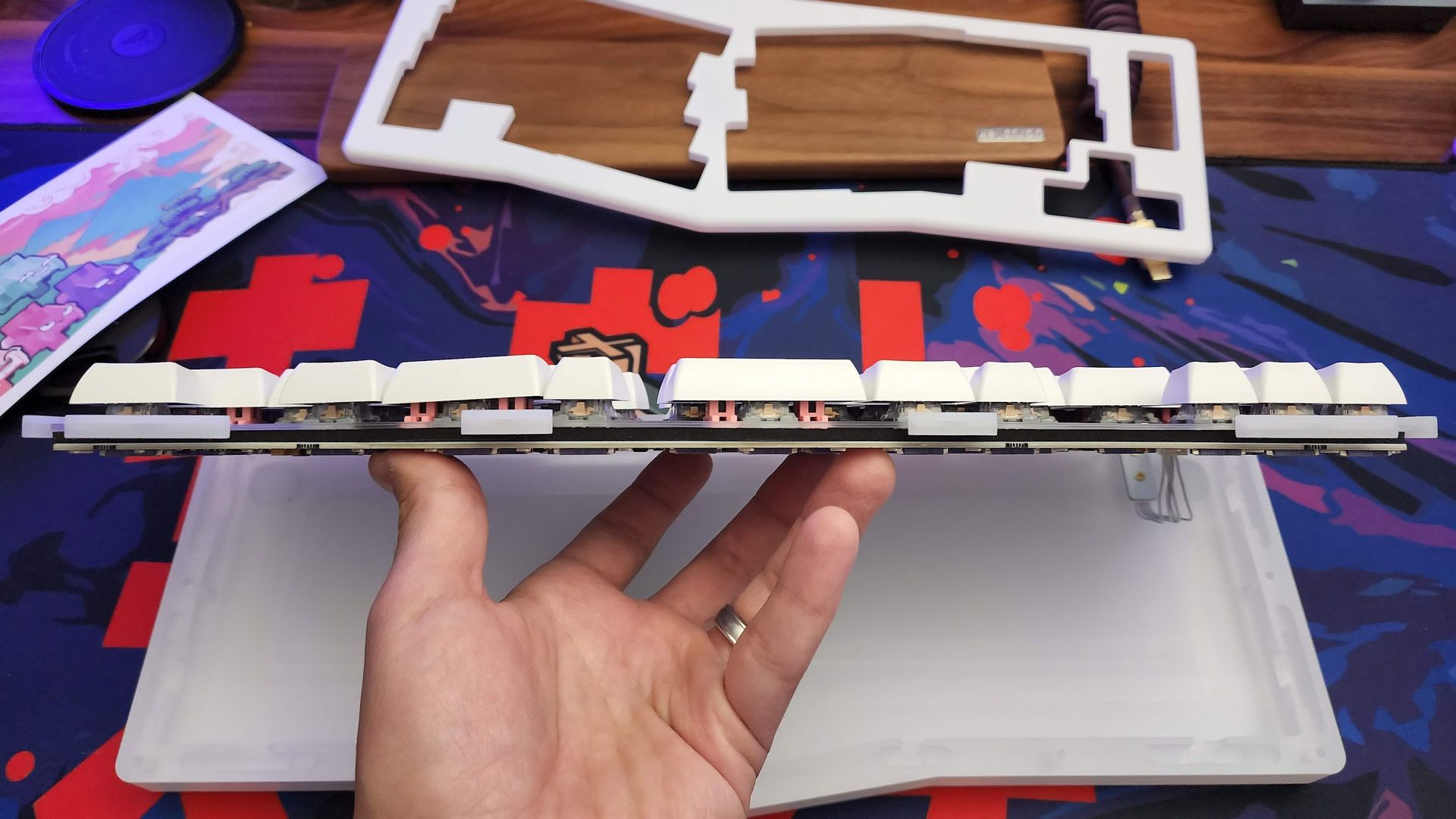 Akko has also put time into tuning the sound of the keyboard, and gives you the option to do more yourself. Beneath the plate is a layer of PORON foam to dampen and isolate key strokes. There’s also a thin silicone sheet between the switches and PC to fine-tune the sound. Inside the box, you’ll also find a custom cut tape to easily put on the back of your PCB to add pop, but the impact is subtle. 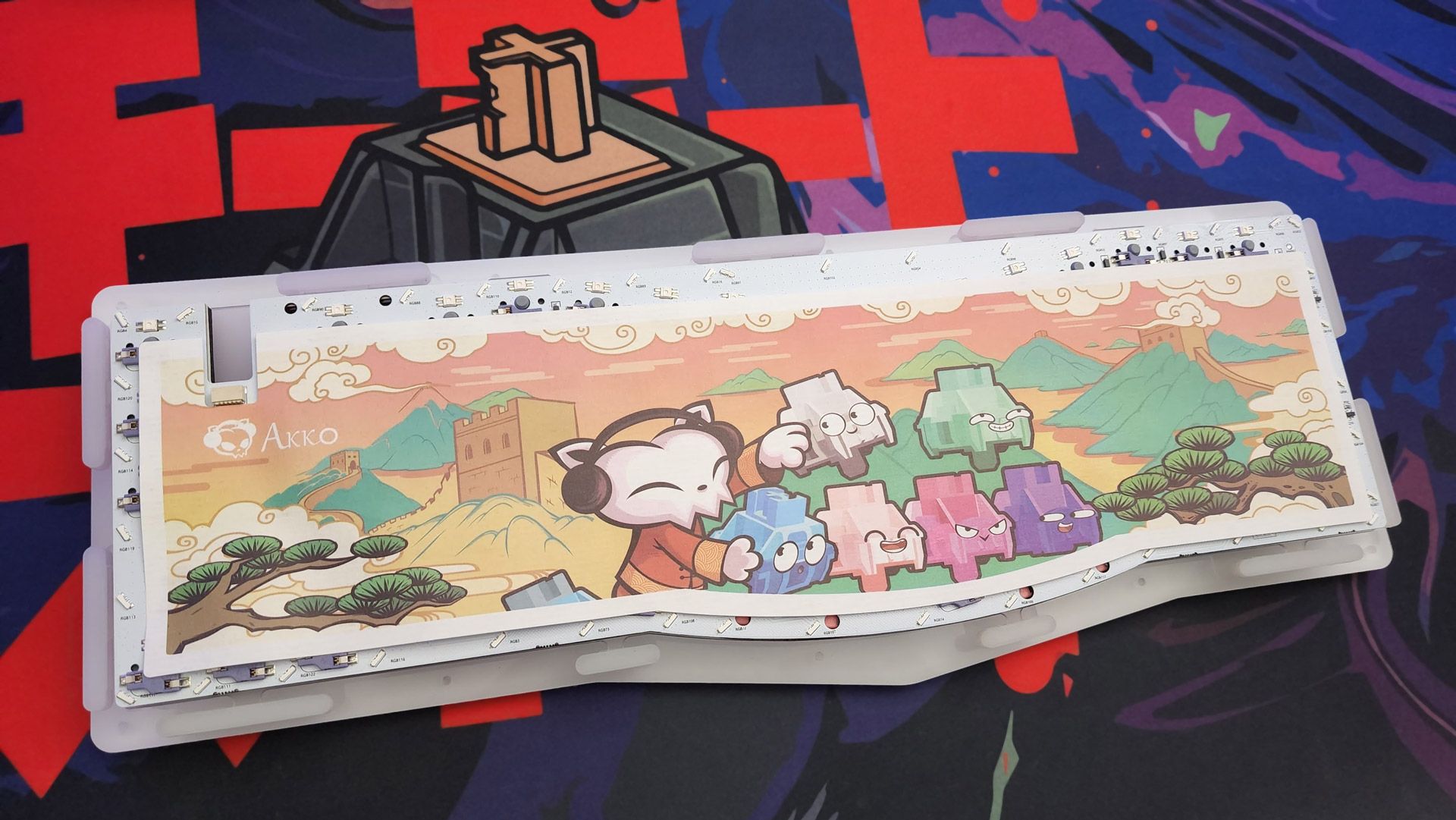 The keyboard also features per-key RGB backlighting. Since the keys aren’t backlit, the legends don’t shine through. Instead, the RGB lighting creates a very nice bed beneath the keys. I don’t mind this look at all, but if you’re not a touch typist, you may need to leave the lights on however, since the legends are very difficult to see in the dark.

This, as well as macros and alternate keymaps, are all programmed through the Akko Cloud Driver. This software suite allows you to complete the basics or remapping and assigning macros, but feels rough around the edges. There are the options or similar levels of polish found in more mature, heavily funded suites like Razer Synapse. It gets the job done, but I think Akko would make a lot of people happy if they started supporting VIA for faster, deeper customization options.

Typing and gaming on the ACR Pro Alice Plus is surprisingly great. I hadn’t used the Alice layout before this review (but was always curious) and was concerned that it might be hard to adapt to. It’s not. In fact, it’s surprisingly easy. There is a slight learning curve, but one I was able to climb within an hour or so of use. That’s because simply turning your hands to match the layout — unturning them, actually — aligns you with the keys and gets rid of most of the early stumbles.

There are still some hiccups to be aware of, though. Since the two halves of the keyboard are spaced out more than usual, if you’ve developed bad habits, they’ll likely come back to haunt you here. The first is the letter B. Some people hit it with their right hand and some with their left. It’s a common pain point in split keyboards, but Akko has addressed it by repeating the letter on each side. It’s a head scratcher at first (why are there two Bs on this keyboard?!) but once you get typing, it quickly becomes apparent why. The second one, for me anyway, was the letter C. I would routinely hit V by mistake, which isn’t an issue I have on other keyboards. 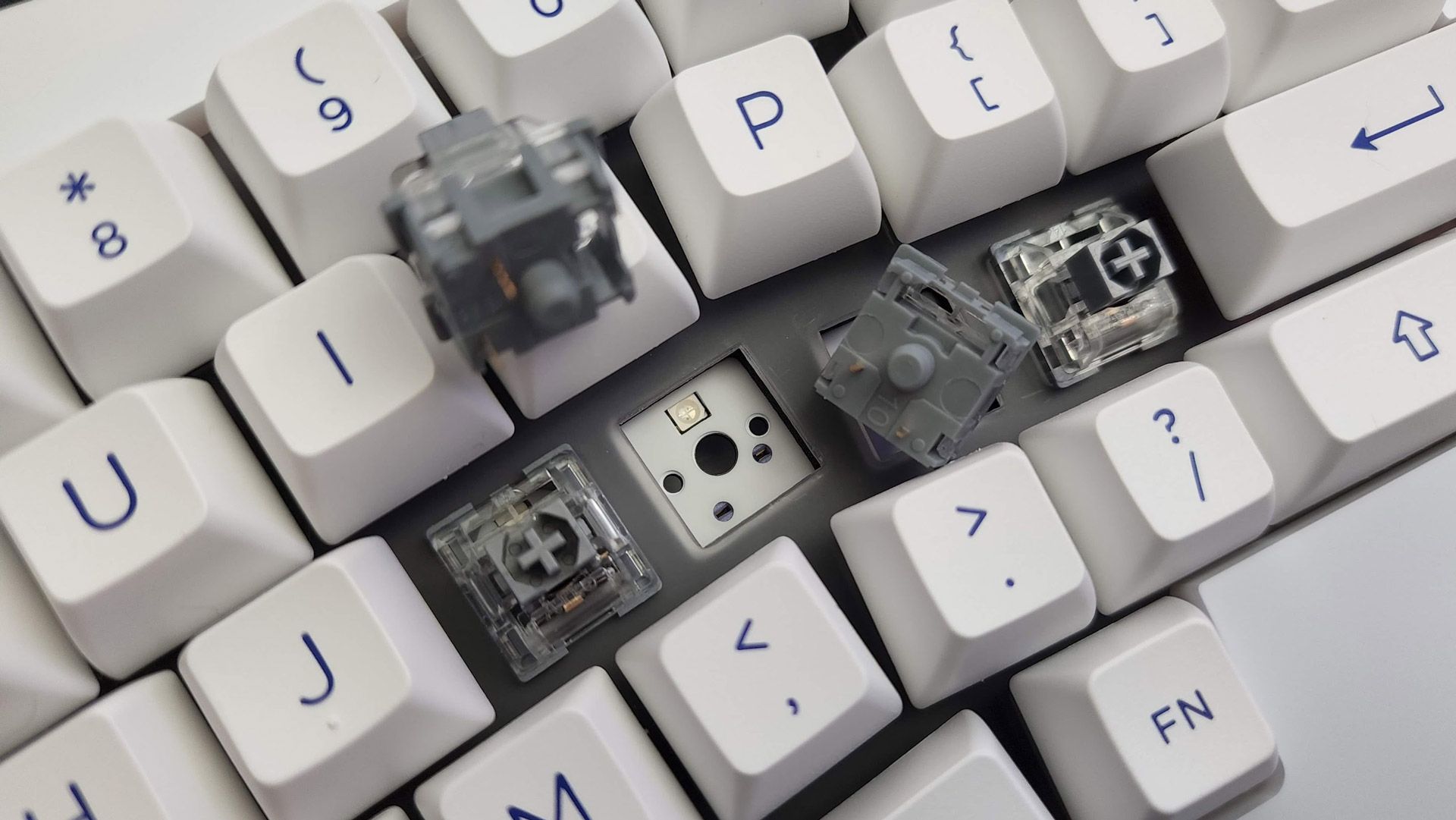 But even with that, the keyboard is just plain fun to type and game on. I love feeling the reverberation of my keystrokes in my fingertips. Don’t ask me why because I don’t know, but I find it very satisfying. The acrylic case also eliminates the need to extra dampening inside the case, so it doesn’t sound muted at all. Typing sounds are clacky (higher pitched) but almost soothing to listen to, a bit like raindrops.

The keyboard has been great for gaming. The handful of navigation keys has become my go-to macro cluster. Since there’s only three, you have to be selective, but I found it to be great and easily accessible on the fly. It’s also extremely responsive and worked great in first-person shooters.

The biggest challenge I’ve faced is how tall it is. The keyboard lays close to completely flat, so without a wrist rest, I was forced to hover my hands. It’s better ergonomically but not the way I want to play or write over extended periods. Unfortunately, there’s no wrist rest in the box, and the beak-like bottom edge makes it impossible to fit a normal palm rest flush with it. I made do, but I would highly recommend Akko include a fitted palm rest in the future.

The Akko ACR Pro Alice Plus is an outstanding way to try the Alice layout for the first time. At only $129 pre-built, it’s a steal. The keycaps and switches are excellent and are well worth the higher price versus the barebones kit. The bounciness it offers, even while typing normally, is next level and a lot of fun. If you’re looking for a unique keyboard that will also help protect your wrists, look no further. This is a winner.