Gaming keyboards can feel awfully familiar. RGB? Check. Red, Blue, or Brown switches? Double check. Floating keys and an aluminum top plate? You guessed it… check. If you’re going for a big brand keyboard, you can usually add inflated prices and being limited to full-size or tenkeyless layouts too. Today, we’re looking at a compact keyboard that throws each of those things out the window and embraces a more subtle sense of style, Gateron pink switches, dual-mode wired and Bluetooth connectivity, for a board that feels altogether more grown up. At $109.99, is the Akko 3068 Silent worth a buy? Join us as we find out. 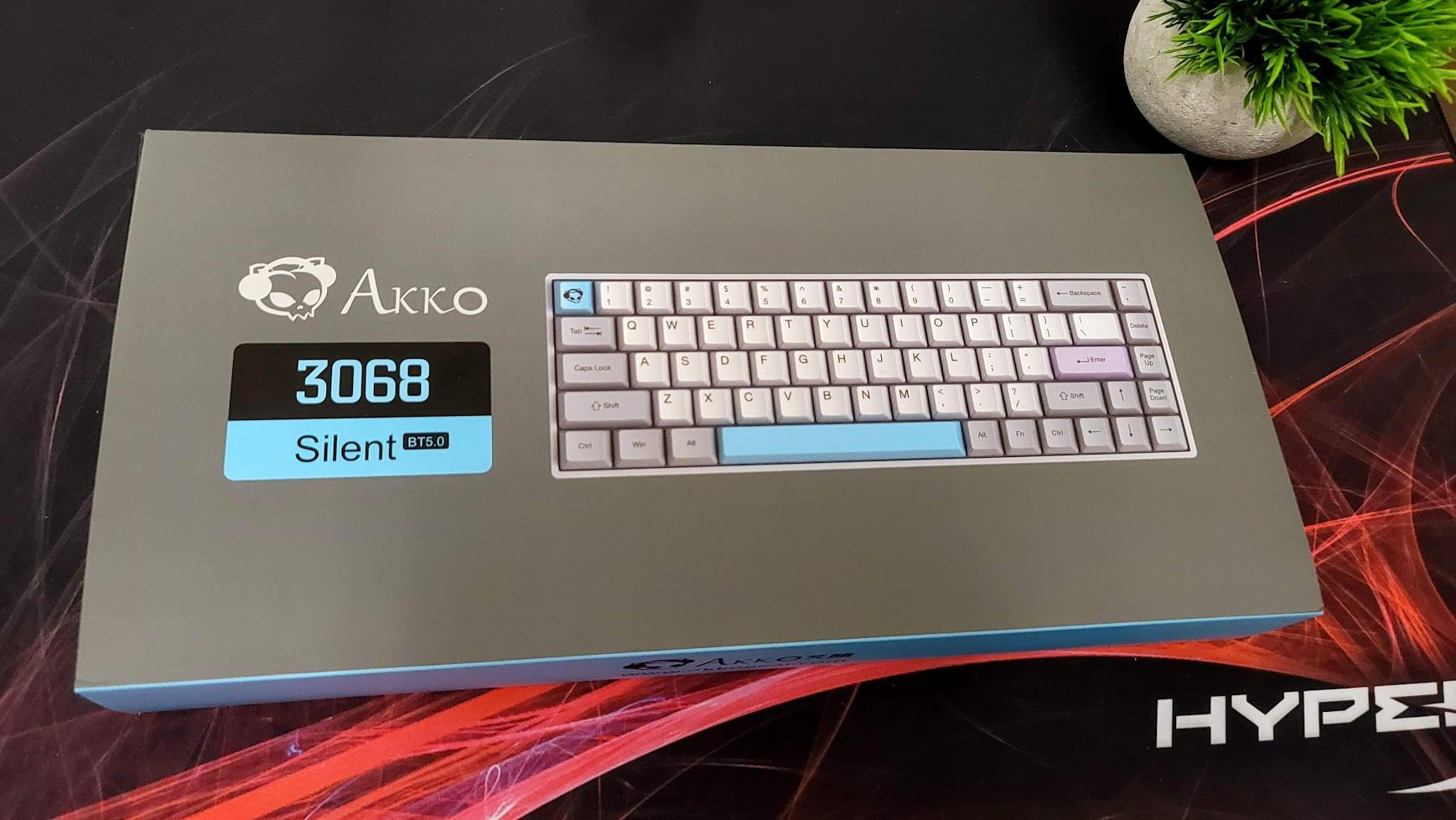 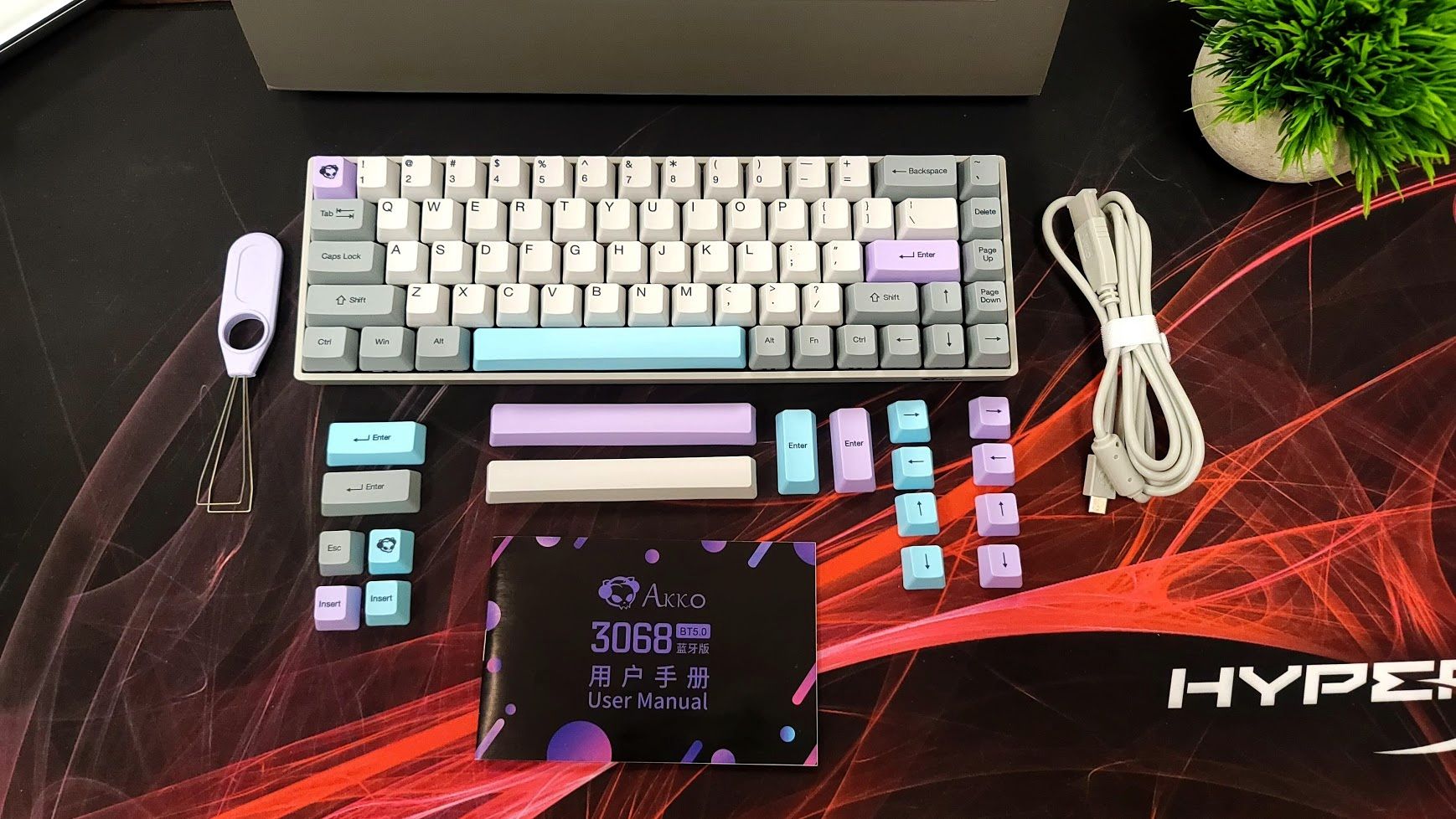 The Akko 3068, provided by Epomaker for this review, is my first experience with Akko and this board, but it’s not for lack of exposure. Akko, who has worked with Ducky in the past, has become more well known over the last several years and the 3068 is one of its best-known keyboards. Its small form factor and reasonable price make it a compelling option, but even more than that is the variety of configurations it can be bought in.

The 3068 is one of the most themed keyboard lines I’ve come across, behind Varmilo’s line-up and the many versions of the Ducky One 2 Mini. The version I was sent features the “Silent” color scheme (something that was confusing because I initially thought it meant this was supposed to be a silent switch keyboard). It’s very traditional with muted colors and blue and purple accent keys to make it pop. I rather like it; it reminds me of the SNES. If that’s not your style, it also comes in Blue and White, a pink Japan-themed Tokyo World Tour, Retro, and Standard versions. There’s a lot of variety, but the layout also supports a standard 65% layout, so there are plentiful keycaps sets to choose from for more customization down the road. 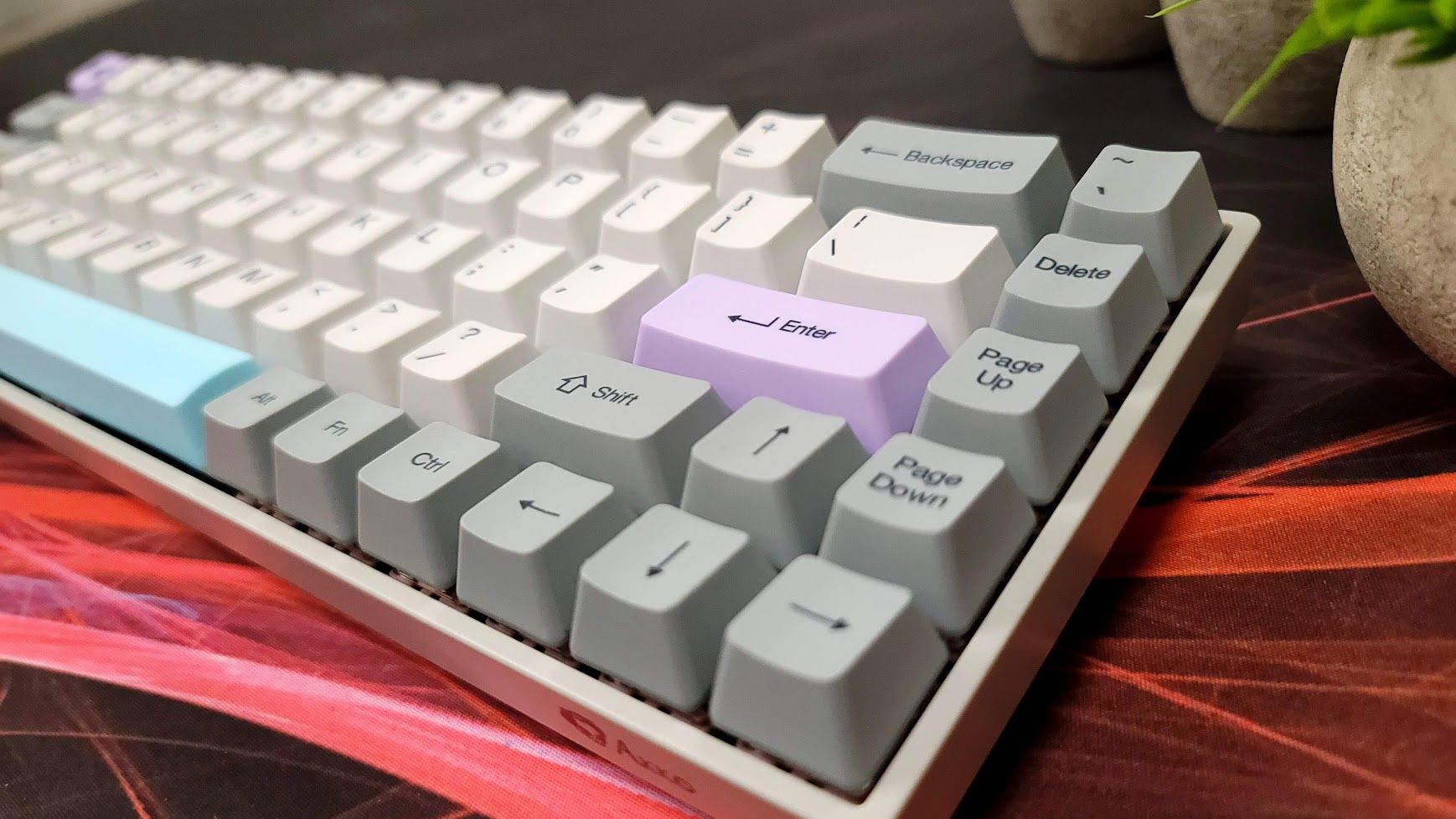 If you’re not familiar with the wider world of keyboards, 65% refers to a 60% layout, plus five to eight additional keys. 65% keyboards usually include arrow keys and a selection of navigation and editing keys along the right-hand side. They’re a good fit for gaming due to their compact size and the ability to keep your mouse and keyboard closer together during play and I personally find them very functional for day to day use too — I can’t live without my Home and End keys.

At first glance, it seems like the 3068 is missing many keys but rest assured it offers nearly all of the functionality of a normal TKL through secondary functions. By holding the Fn key, the number row turns into the function row. Page Up and Page Down send Home and End. M, <, and > turn into volume controls. The biggest omission here is Print Screen, which has forced me to use the more cumbersome Win+Shift+S combination for the Windows Snip tool.

Taken as a whole, however, the 3068 Silent has a very minimalist feel to it. The compactness looks very clean on any desk, and there’s no garish RGB to distract you while you’re gaming or turn your setup into a light show. If you need to type in the dark, there’s a nice white backlight with a handful of effects for breathing and reactive typing if you want them, as well as the regular static backlight that I prefer. The keycaps aren’t backlit, but since they illuminate the keys you can still make out the legends in the dark.

This version of the keyboard uses Gateron Pink switches. They’re lightweight and linear, much like Cherry MX Reds, but noticeably smoother. There’s a moderate amount of spring ping but I would still consider these an improvement over Cherries. 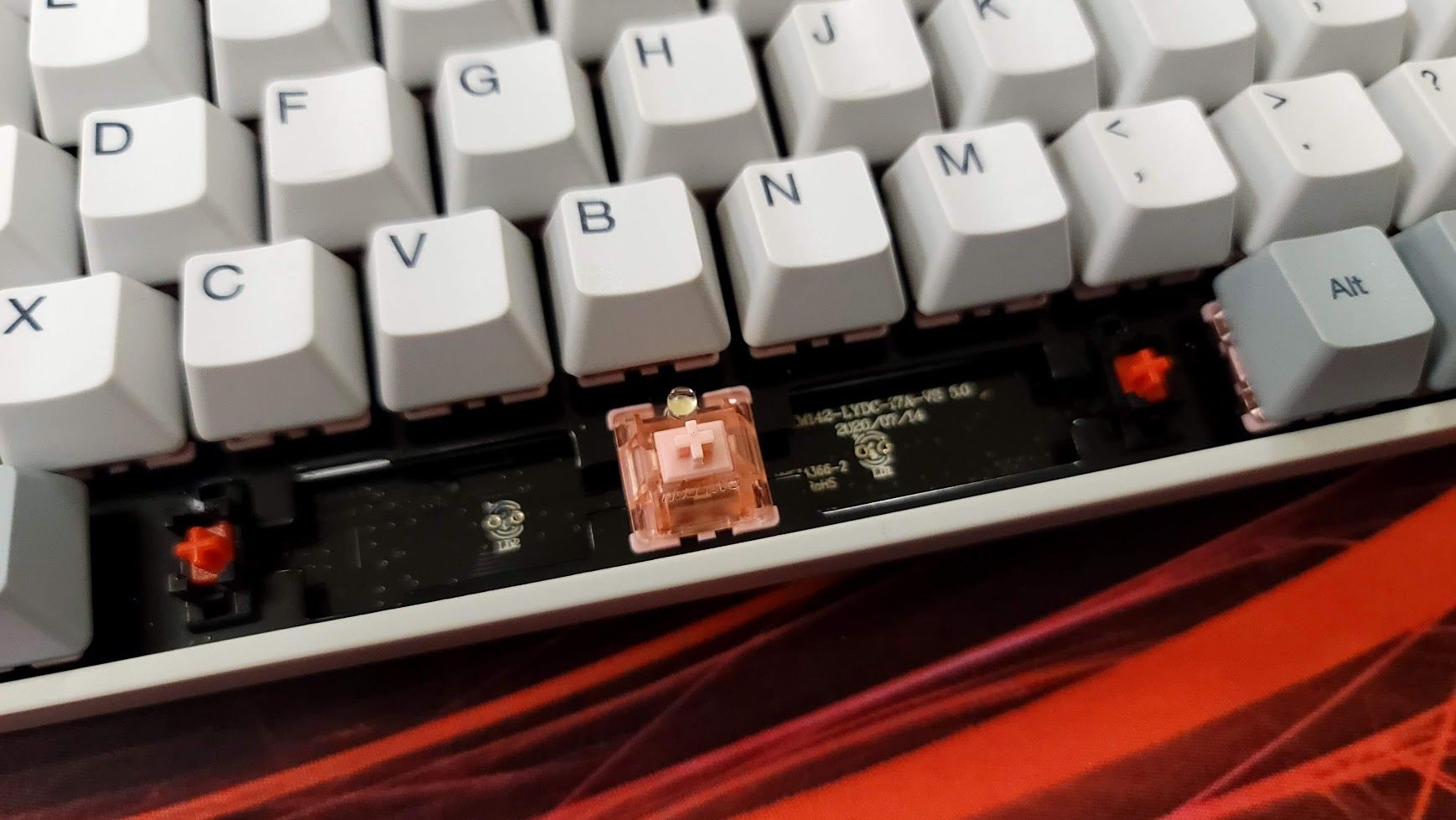 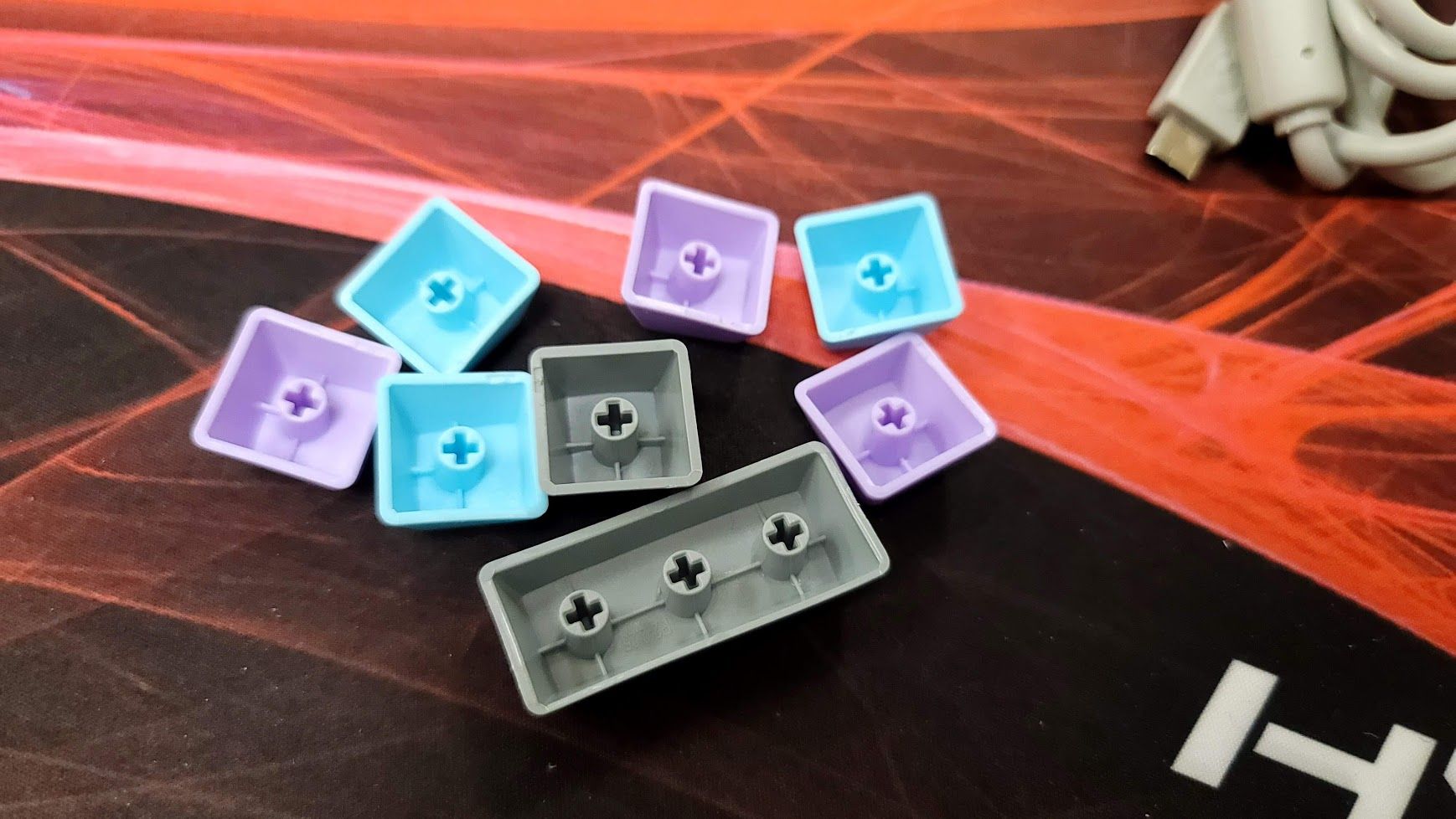 The keycaps are also pretty good. They’re PBT and dye sublimated, which means they'll never shine and the legends won’t degrade over time. They’re also textured, which feels nice under the fingers. At the same time, the tops allow a ton of light to shine through which doesn’t look great in the dark. Yes, they let you see the legends, but I’m not a big fan of the trade-off here. Since the board comes with different keycap sets, I can’t say for sure that this will apply to other versions. The blue spacebar (there are three) also had some noticeable warping that made it look slightly bent.

The stabilizers are also only so-so. Akko attempted to lube them but it really doesn’t seem to help since they are fairly rattly out of the box. Adding some more dielectric grease definitely helps.

One major high point the keyboard has going for it is that it supports on-the-fly macros without the need for software. This means you can record sequences in games and then map them to a key to fire off at will with a single button press. This is also useful in productivity when you’re completing repetitive tasks, such as editing spreadsheets or Word docs.

Another big plus is that the keyboard supports wired and wireless connectivity through Bluetooth 5.0. It supports three separate wireless connections that can be swapped between on the fly with a quick key combo. I found the connection to be easy to establish and reliable once it was, even when rapidly switching between connections. I wouldn’t use Bluetooth for more than casual gaming, but it definitely adds utility to the 3068 as a travel keyboard with a tablet or laptop. 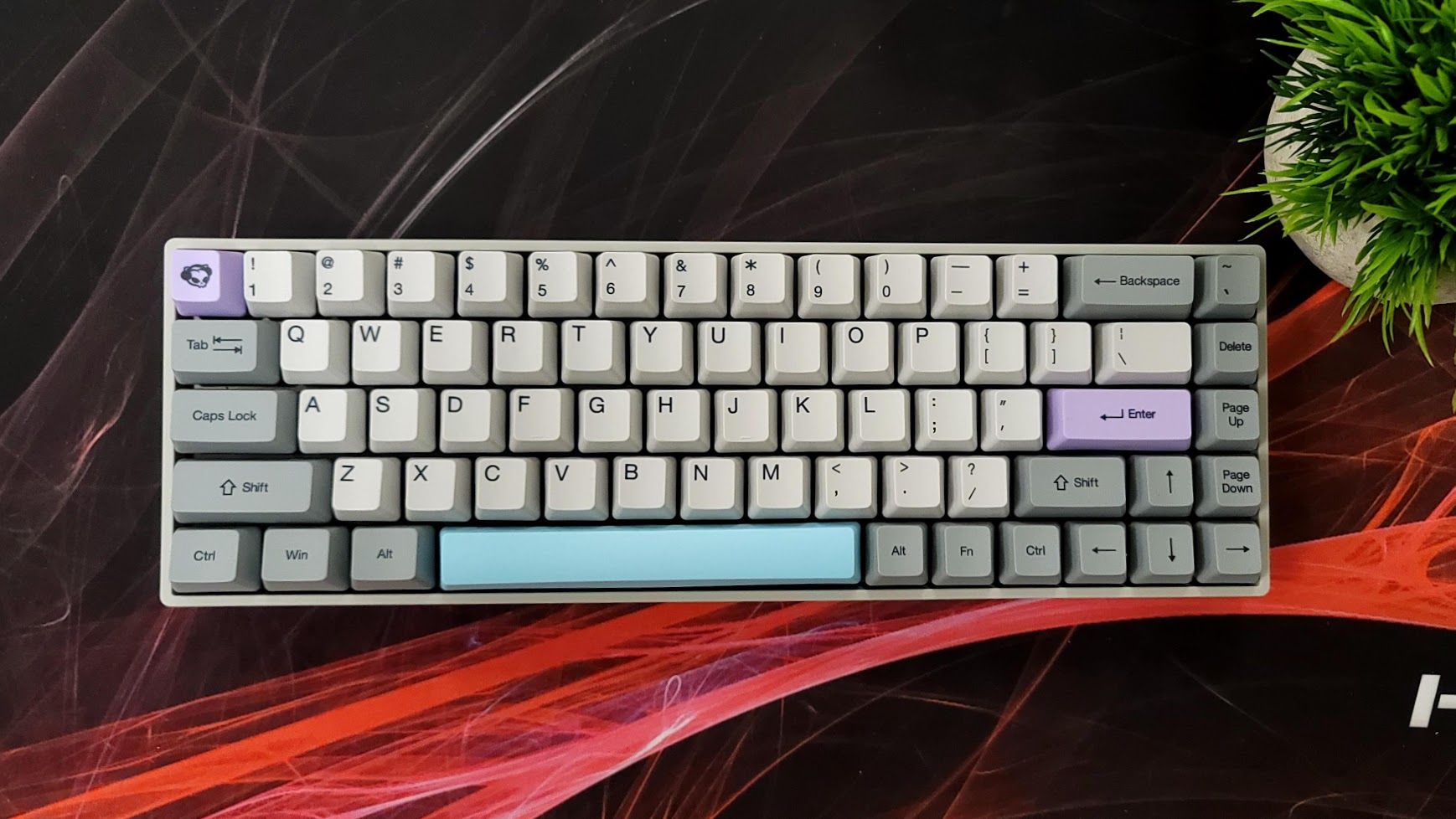 Even though it has a few shortcomings, the Akko 3068 Silent is a good keyboard. The stabilizers can be quieted within five minutes using a $3 tube of dielectric grease and the keycaps have some shine-through, but no more so than other light-colored caps in this price range. For $109, this is a solid buy if you’re in the market for a compact keyboard and don’t want to buy into the RGB craze.

The product described in this review was provided by the manufacturer for evaluation purposes.
7.5Good
Pros
Cons
Tags
Mechanical Keyboards
Peripherals
Epomaker
Akko