Back in November, we took a look at the ADATA XPG Lancer DDR5-5200 memory kit, but today we’re kicking things up a notch with the DDR5-6000 RGB-enabled kit. Coming to market at $519.99 at the time of this writing, does the added speed justify the higher price?

Leading into this review, it’s worth diving back into what differentiates DDR4 from DDR5. Since I’ve already written about it extensively in my original review, I’ll include the background information here with minor updates.

Before diving into the performance of this kit, it would benefit us to spend some time looking at DDR4 vs DDR5 in general to see what this latest generation brings to the table. The headline improvement is obviously the speed boost. We’re already seeing promises of DDR5 kits running at 7000 MHz in our future, though the minimum standard is 4800MHz, so new kits shouldn’t go any lower than that. These higher speeds come with increased latencies. The standard latency will be CL40. In both cases, we’ll see variations from this, and many of the launch kits are factory overclocked to 5200MHz or higher.

Another interesting change is how the memory banks are structured. On DDR4, sticks were limited to single-channel each, so enabling dual-channel required at least two memory sticks. Running a single memory stick resulted in a noticeable performance loss. Now, each stick contains two channels each, so single-stick, dual-channel or dual-stick, quad-channel configurations are now possible.

The potential density of each die has also been doubled from last generation, 16Gb to 32Gb each. This means that we’re likely to see higher capacity DIMMs than were possible with DDR4. It’s important to note that this is part of the DDR5 spec but modules are still being developed which incorporate this.

DDR5 brings a number of other changes with it. All memory is now error-correcting, a capability previously limited to server-side memory, increasing its reliability. Power management is also now handled directly on the chip with an integrated controller. This generates a small amount of additional heat, however, so it’s possible we could see this impacting higher speed or poorly designed kits in the future. The chips also use less power overall, pre-overclocking with a 1.1v standard

The other thing to know is that DDR5 is currently prohibitively expensive. The kit we’re looking at today currently retails for $519 for two 16GB sticks. If you’re willing to sacrifice RGB, you can pick up a kit for as “low” as $449. A quick search of Newegg shows that you can buy twice the capacity of DDR4 at 4400MHz for $130 less ($90 less if you want an RGB kit). As a result, it’s going to have to offer a substantial performance boost to justify the added cost.

The kit we’re looking at today is one of ADATA’s premier options for gamers and is part of the company’s XPG line-up. It features two 16GB memory sticks with a factory overclock enabled through XMP at 6000MHz. That is obviously incredibly fast but is tempered somewhat by high CL40 latency timings. Like the prior ADATA Lancer kit we reviewed, these DIMMs utilize Micron ICs.

Unlike the last kit we reviewed, this version is RGB enabled with a thick, eye-catching RGB diffuser along its upper edge. The RGB functionality is compatible with all of the major motherboard manufacturer’s lighting systems: MSI, ASUS, ASRock, Gigabyte, and MSI. At 40mm, these sticks sit high enough to interfere with some large air coolers like the Noctua NH-D15. Given the high temperatures of the Intel 12000-series CPUs, these are probably best matched with an effective liquid cooler (or at least an air cooler with a central or rear exhaust fan).

Given the current component shortages and the relatively early state of the generation, our comparison testing is relatively limited. Taking a suggestion from one of our readers (h/t Quizzical), we decided to add factory speeds of 4800MHz into our testing rotation. This will help illustrate the benefits of the added speed and help you decide if it’s worthwhile for you to invest versus picking up a slower kit with improved latencies. The second kit, a DDR4-3600 set, is included to show the potential performance uplift upon moving to a new platform, but since a different processor is used, it’s not a 1:1 comparison, of course. 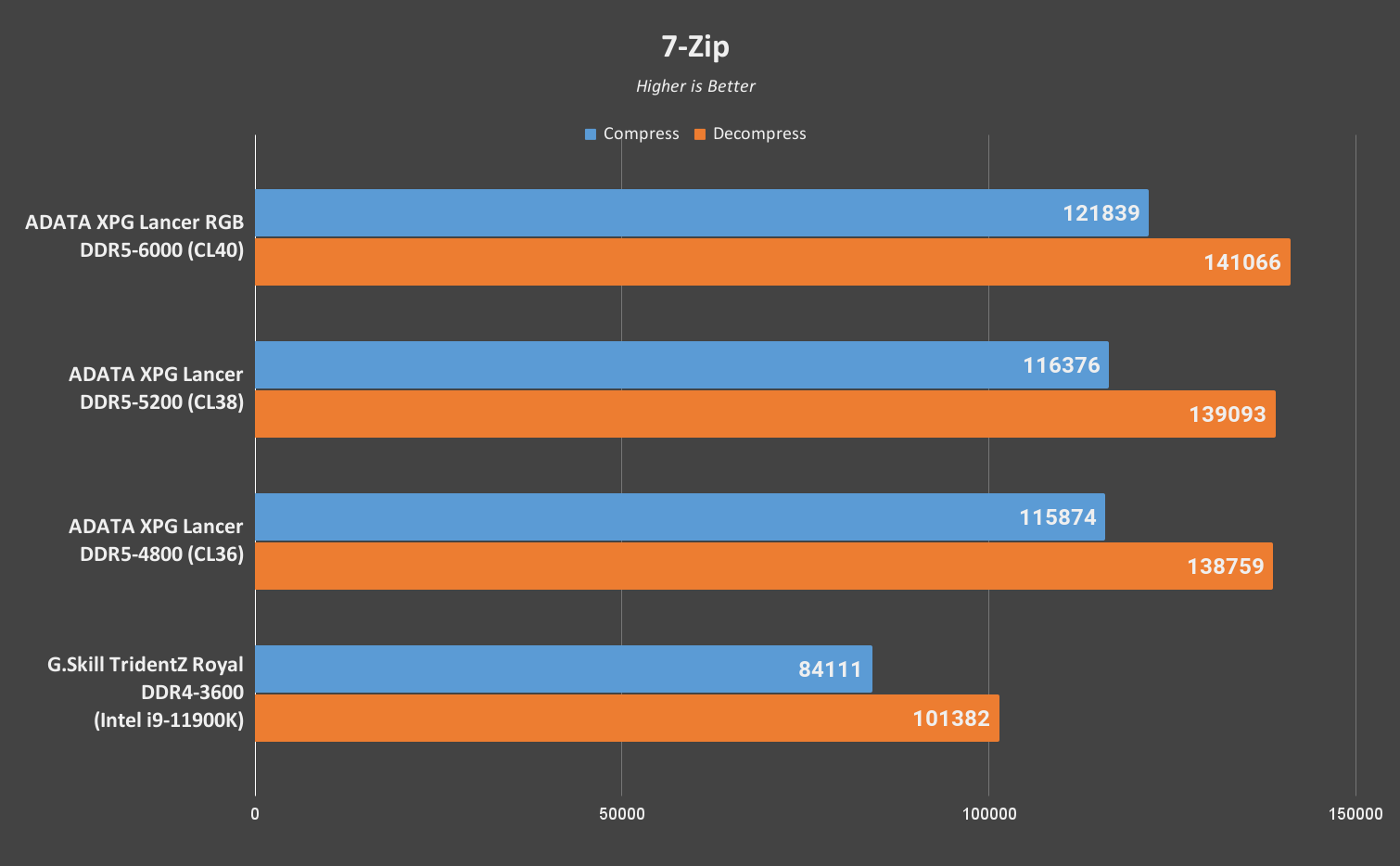 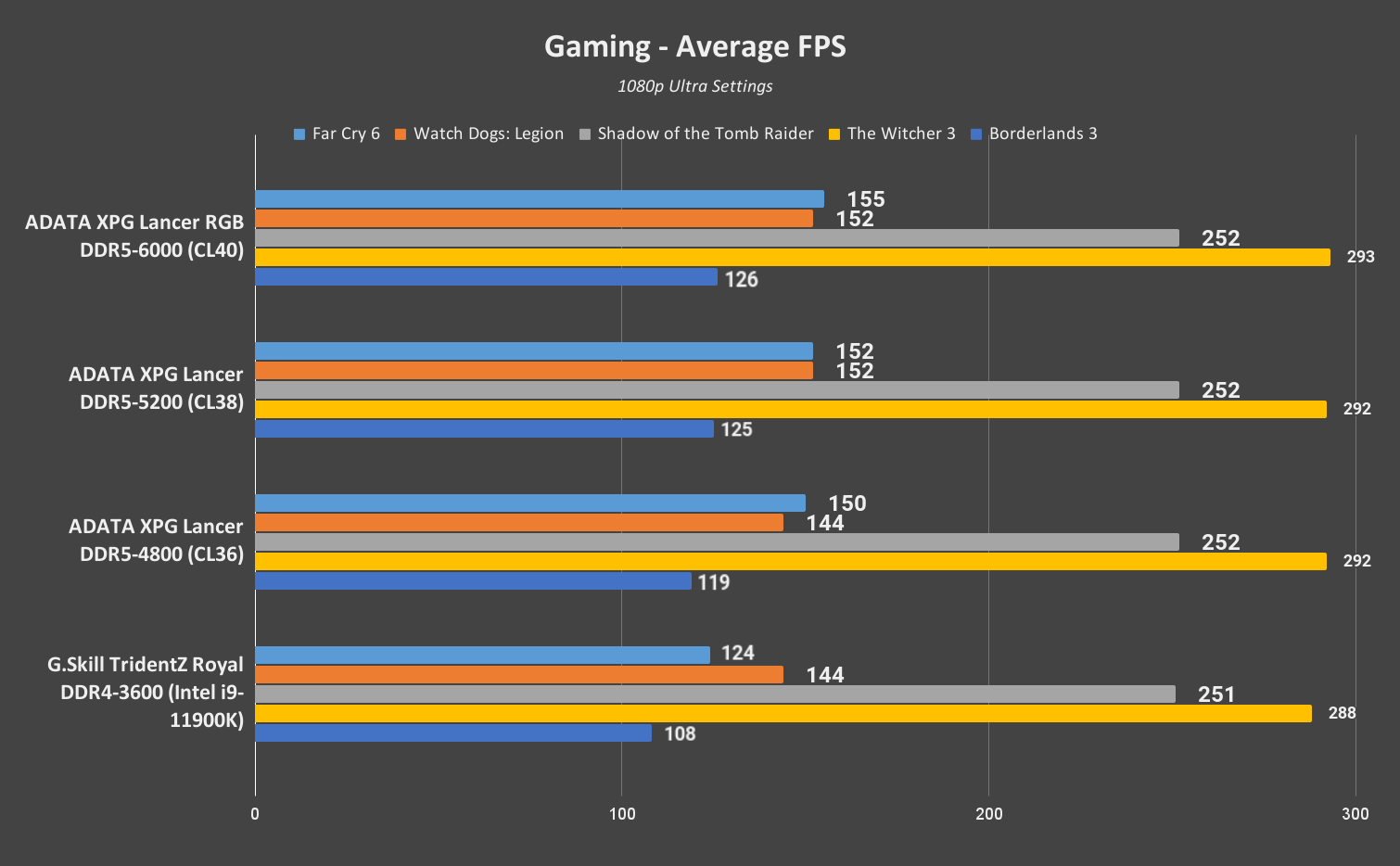 After conducting this testing, a couple of things are clear. First, it’s that DDR5 remains the territory of high-end enthusiasts. Given the high prices, buying in now means an extra investment without the expected return in performance (though it is admittedly objectively very good). For the average gamer, it’s not worth spending that much when other components, like graphics cards, demand substantially more than they have in the past. Second, it’s that much of the speed benefit you might expect is eaten up by the increased latencies. There is a benefit here, but will you feel it? Probably not, at least in most use cases. Therefore, while this kit is good, our recommendation is to buy a slower kit with improved latency or to hold off and buy much cheaper DDR4 until more affordable low latency DDR5 kits become available.