If you were lucky enough to snag a Playstation 5 this holiday season or you are looking to upgrade your PC storage, you have likely looked at a few NVMe drives. Why wouldn’t you? The combination of speedy access to your applications and the absences of moving physical parts makes it a winning combo… but costs can be prohibitive.

In a veritable arena of options, XPG places a contender into the high-speed storage market with an NVMe drive boasting high transfer speeds and PS5-compatibility. But, can XPG deliver performance AND be cost-effective? Let’s find out.

If you have ever researched NVMe drives, there are a lot of options on the market to choose from. So, what makes XPG stand out? In order to answer that question, you need to look at ADATA, XPG’s parent company.

Based in Taiwan, ADATA has become a global powerhouse providing storage solutions (hard drives, SSDs, flash memory), DRAM modules, mobile accessories, and beyond in consumer and industry markets. XPG comes into the picture as ADATA’s arm focused on the gaming market. From cases to coolers, RAM kits to laptops, XPG’s stated goal is to “innovate the future defined by ambition.” A lofty goal; let’s start digging into the ATOM 50 to see if it is worthy of the legend. 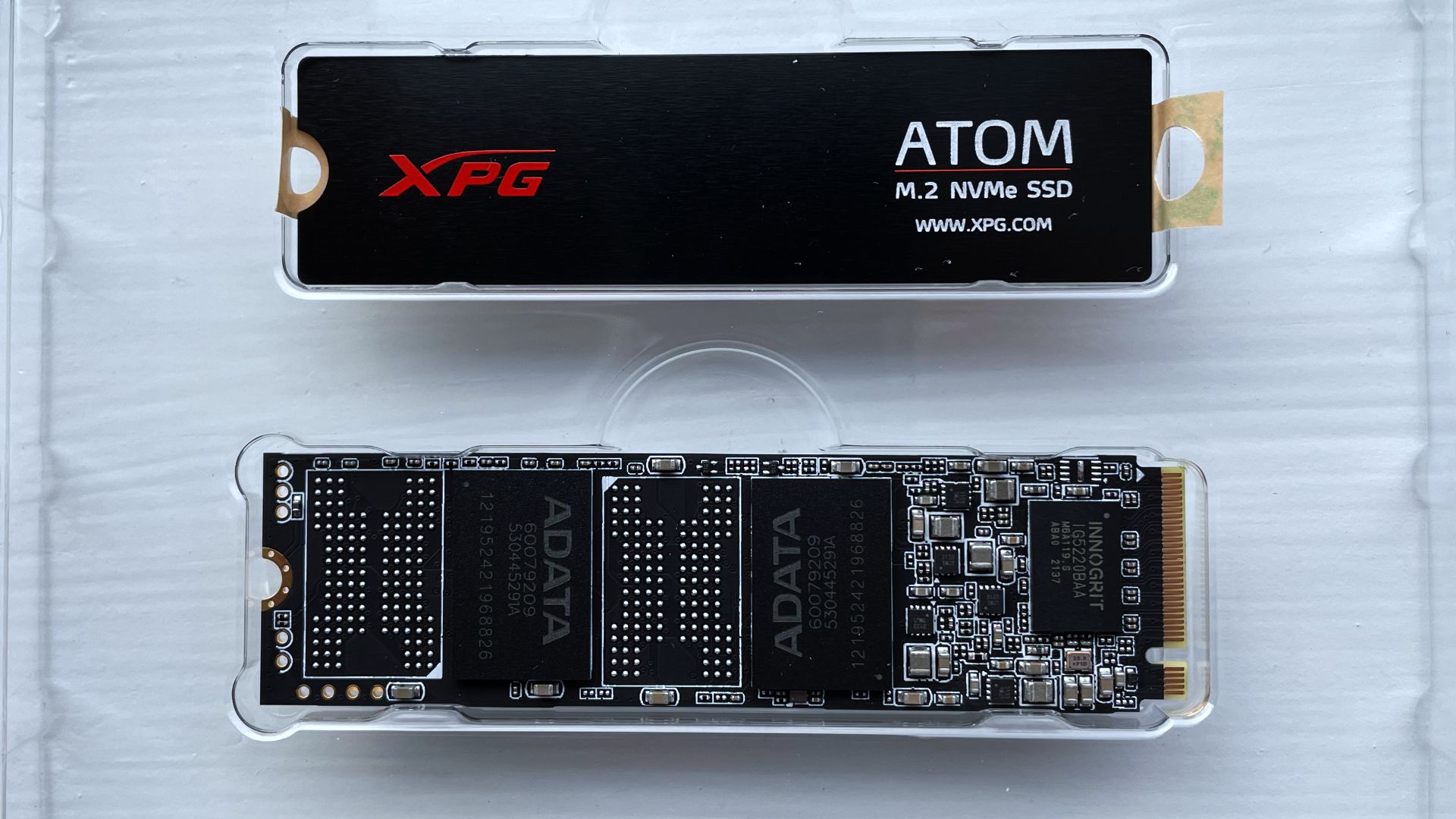 Under the hood, the ATOM 50 has 1TB of 3D NAND memory. While there are other drives in the ATOM’s family, the ATOM 50 is the only one that utilizes four lanes of PCIe 4.0. When the possibilities of this PCIe bandwidth are combined with SLC cache and Host Memory Buffer, the ATOM 50 is advertised to reach high speeds of 5,000 MB/s Sequential Read and 4,500 MB/s Sequential Write. Advertised write speeds are great, but seeing the ATOM 50 at work will give us a clearer picture of what it’s capable of. Let’s take a look at the numbers.

For our first battery of tests, we ran a series of synthetic benchmarks to give us baseline performance numbers for the XPG ATOM 50. To collect these, we ran AS SSD Benchmark, CrystalDiskMark64, and ATTO Disk Benchmark.

Before we get into the data, here are the system specifications for our test bench:

Much of our focused comparison will center around the AORUS Gen4 and the Samsung 980 PRO as these are both PCIe 4.0 x4 offerings. While many of the drives listed above are outclassed by differences in protocol and product generations, they are included to highlight the difference in performance between PCIe 3.0 and PCIe 4.0 as well as the vast delta between PCI3 4.0 and SATA III.

We begin our testing with ATTO Disk Benchmark. If you aren’t familiar with how ATTO Disk works, here is the quick breakdown: the test will queue up chunks of data, all varying in size. Then, it provides a breakdown on how the drive handles the reading and writing of these data packets onto the drive. So, how did the ATOM 50 do?

In ATTO Disk, the ATOM 50 tested at 4.70 GB/s (read) and 4.56 MB/s (write). It falls a bit behind where the top end of the advertised read speeds,  but the write speeds land in the ballpark of where they are supposed to be. Make note that it is not uncommon during these tests to see some variation. Remember: these are advertised peek speeds. We saw a similar picture with the AORUS Gen4 as well.

The final piece of data for our synthetic tests will come from CrystalDiskMark. If you look at the charts, the XPG ATOM 50 performs modestly among the PCIe 4.0 NVMe drives we have had the opportunity to test. It goes toe-to-toe with the AORUS Gen4 in read speeds, but overtakes it in write speeds by a significant margin. 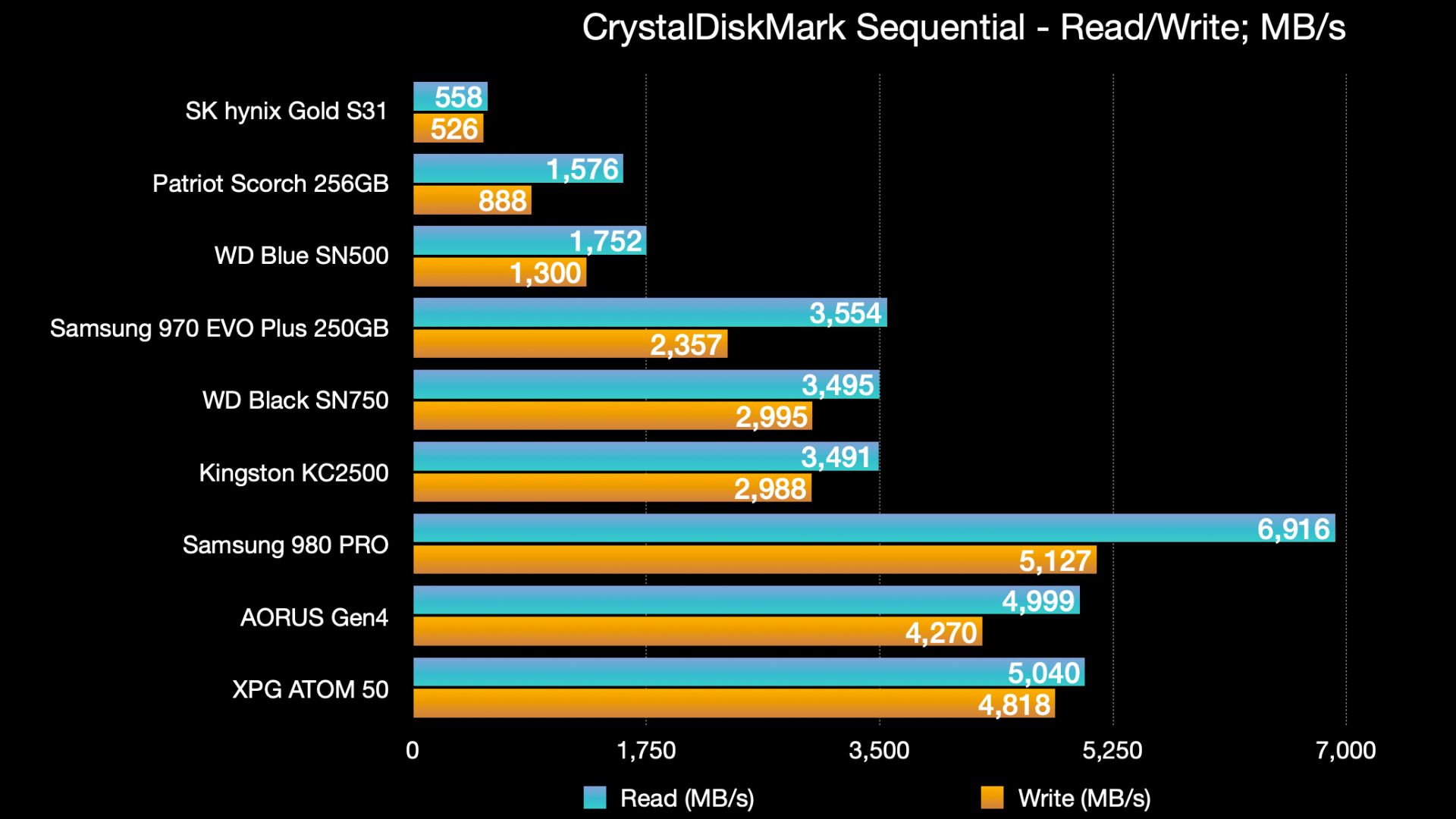 To give us a better picture of the ATOM 50 out in the wild, we ran a series of gaming tests to collect information on load times between scenes and into specific portions of a few games. We also recorded cold boot times to give a picture of how fast an NVMe drive will get to your login screen. 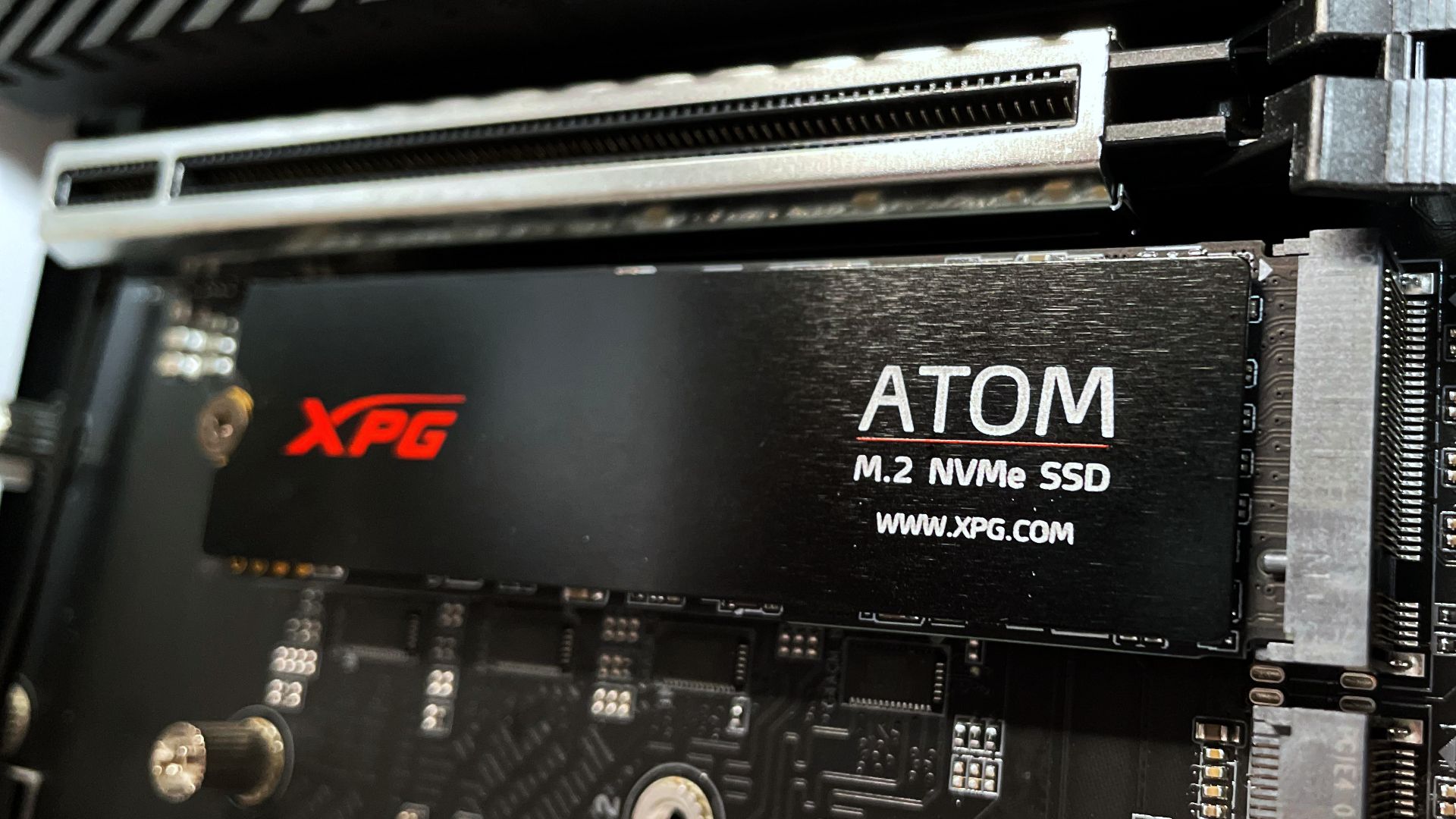 Out of the box, the ATOM 50 made an impressive showing. This high-speed NVMe drive utilizes a decent enough portion of PCIe 4.0’s capabilities to push it ahead of its predecessors, it fits the needs of the Playstation 5 (for those who have one), and it does the seemingly impossible in the dawning of 2022: it remains a modestly priced piece of modern technology.

One place that we do need to give a slight critique to is the included heatsink. It is a very thin thermal spreader that the end-user needs to apply to the NVMe drive themselves. This isn’t a problem if you are super precise with these kinds of things, but there is a reason why I never applied stickers to things as a kid: I am not. While I can appreciate the option to use with or without (for those with heatsink-equipped motherboards), the idea of removing or reseating a catawampus heatsink gives me pause.

All things considered, if you are looking for a PCIe 4.0 x4 NVMe drive for your PC or PS5 that performs well within the protocol’s performance spectrum and you don’t want to break the bank doing so, this may be a drive worth considering. At $119.99 USD, the XPG ATOM 50 serves as a cost-effective option for expansion or a higher-capacity boot drive.