NVMe drives are getting more and more affordable with each passing month, and while external factors such as the current global COVID-19 pandemic might affect supply lines and manufacturing, the fact of the matter is larger sized, high-speed SSDs aren’t, in theory, the incredibly expensive drives of yesteryear. ADATA is looking to smash the market with two affordably priced NVMe SSDs, the Swordfish and its faster cousin, the Falcon.

At first glance, the two drives are rather attractive. Both are slim, which makes sense with the m.2 form factor, even though we have seen these style SSDs with incredibly aggressive heat sinks. The only visual difference between the two is the color – the Swordfish has a softer silver finish to its heatsink, while the Falcon is given a bright gold heatsink. Both are etched aluminum, giving them a refined, yet practical look.

I didn’t realize at first that there is also a plastic film on the top of the drives to peel off. In fact, I only realized this when I went to swap out the Swordfish from my test machine and saw bubbles on the film from the heat given off by the SSD during use. Once I realized this, I peeled it off, but be warned if you get one to tackle this beforehand.

When looking at the specs, I was interested in how these two drives, so close in price with the Swordfish retailing for $114.99 and the Falcon 1TB sitting at $129.99, were so close in price but so different in their rated specs. With the Falcon seeing read numbers at least more in line with most NVMe SSDs, rated at up to 3.1GB/s, while the Swordfish is rated up to 1.8GB/s, yet there is only a 15 dollar difference between the two drives, it made me wonder why anyone would look at the Swordfish at all. 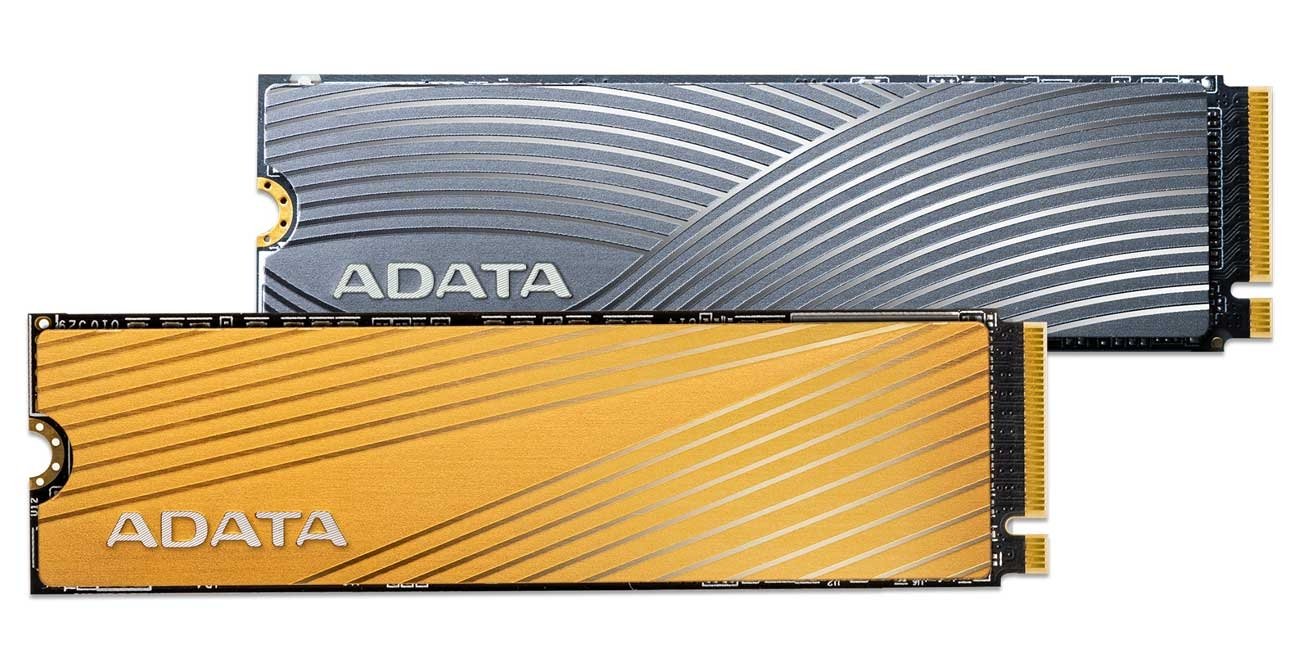 Don’t be confused either – the Swordfish, even with its lower rated read/write spends than you typically see on an NVMe drives today, is not a SATA drive. SATA typically caps at 500MB/s, so the Swordfish, at least with read speeds, sits more than 3x faster on paper. It’s a definite upgrade over a more traditional SSD. But even then, for $15 more you’re able to jump up to 3.1GB/s read speeds, so it feels like, in a sense, the Swordfish is being eaten by the Falcon.

Both drives use what ADATA call 3D NAND flash memory, which essentially allows for higher efficiency and a boost in reliability when compared to 2D NAND solid state drives. Both also support ADATA’s own SSD utility toolbox program which help monitor drive status and more, as well as migrate data from HDDs to the SSD you choose. Additionally, both drives support low-density parity-check error correcting, helping to check and fix errors on the drive, as well as SLC caching and AES 256-bit encryption.

For synthetic benchmarks, we tend to rely on CrystalDiskMark and ATTO SSD tests. Both are great at determining whether the claims given by the manufacturer in terms of rated read/write speeds reflect real world metrics. In addition, we timed the transfer of large files from one drive to the next to get a feel of real-world performance in accessing files, as well as loaded up some large games on the drive to test loading times.

CrystalDiskMark measures the performance of each drive by reading and writing large amounts of data to each, measuring the performance. For both drives, each performed beyond the rated speeds, with the Falcon topping at a 3276 MB/s and 1689MB/s read and write speed, respectively. The Swordfish also rates a bit higher than its listed speeds, with a read/write of 1867 and 1209 GB/s, respectively. This may not be indicative of ever drive’s performance; we may have simply hit the silicon lottery here with both drives. However, it’s impressive and heartening to see.

ATTO SSD shows us a more granular look at the SSDs in action, breaking down the performance on a block by block basis. It’s interesting as we see different points where each SSD peaks in its performance, with the Falcon peaking earlier at the 512KB point, while the slower Swordfish doesn’t hit its real peak until the 1MB point. You’ll also see that both drives are rated slower using ATTO SSD, with each coming just under their rated speeds in this benchmark.

Transferring large files on each of these drives is a breeze. We took two large video files in a folder, a total of 3.5GB and moved them from one drive to the next. The origin drive was the Patriot Viper VPN100. The Falcon lived up to its transfer rating, moving the files over in literally a second. Seriously, the transfer progress window essentially flashed, and it was done.

The Swordfish took a little longer - a respectable two seconds – and the files were on the new drive. Moving them back took just as long on both drives. It was impressive, but also a bit par for the course with modern NVMe drives as well.

Game performance is where I was hoping to see some improvements over a standard SATA drive, or even my current roster of NVMes. It’s here we see a bit more of the same. Games like The Elder Scrolls Online take ages to load on even the fastest of computers and are incredibly dependent on the server as well as your PC to fully load into Tamriel, but from clicking play in the launcher to the login screen it took about 15 seconds – skipping the splash screens. GTA V is also a game that takes quite a bit of time to load into, and from the time I clicked “Story” in the menu, loading into Los Santos took about 27 seconds on the Swordfish, while the Falcon came in a little faster at 23 seconds.

Both drives performed above their rated speeds in the CrystalDiskMark tests, and about on par with what we should expect in the ATTO tests. Transferring files takes no time at all and real-world performance will be a joy for those looking get the best loading times and performance out of their games. Yet I find myself at an impasse with how to recommend at least one of these drives. For $114.99, the Swordfish isn’t poorly priced for the 1TB model we reviewed. In fact, it's spectacular value on its own. But as of this writing I cannot find it anywhere listed for that price. It’s not even an option on Amazon, and the only real dealer I see selling it is Newegg where the price is listed at $185.99 as of this writing, making me wonder if scarcity is leading to price gouging.

The Falcon is a better buy for just 15 dollars more, but even then, the disparity between read/write speeds is a massive gulf. While write speeds are typically slower than their read speeds, normally they aren’t that far apart – this drive has it rated at about half the speed of its read rating.

It’s not a death knell, but it’s certainly something to keep in mind when looking at comparable drives, such as the Viper VN100 ($149.99 for 1TB @ 3.2GB/s Read / 2.2GB/s Write). The price is not bad, though. At 14 cents per gigabyte, the price is not as bad as others (the 1TB Intel 760p is still over $200 on Amazon for instance). In fact, for the performance, if you’re looking for a good 1TB drive for the money, you can’t go wrong with the Falcon from ADATA.

As I look at the two drives, it really does make me wonder just who these drives are really made for? The Falcon, with its heavy lean into fast read speeds feels like a drive meant for content creators who need to access large files and content right away. ADATA even mentions this drive was meant with those who work with photo editing, industrial drawing and programming in mind. But when looking at the materials for the Swordfish, it’s also being propped up as a drive for video editing and programming – albeit with its slower speeds, though the Falcon seems more targeted for professionals in its marketing.

It’s here where I feel like I’m at an impasse. I can’t recommend the Swordfish while the Falcon is so close in price and has just faster performance over its slower cousin. Yet I also don’t think you’re wrong if you buy the Swordfish (assuming you can get it at its retail of about $115) because it’s an insane value for a 1TB NVMe drive. But I can shake that it feels like ADATA is cannibalizing itself here with the Swordfish simply not feeling as good a value proposition next to the faster, and similarly priced Falcon. It really comes down to whether or not you want the blazing fast speeds of the Falcon, or pay less per GB with the slower, yet cheaper, Swordfish.

Either way you go you’re going to get a good drive, it just depends on whether or not you want something skewed more towards the read speeds you see in higher end NVMe SSDs or something that is still night a day faster than a SATA alternative.