With 4K resolution becoming more of a standard for PC gaming (at least for those who can find a newer GPU without paying an arm and a leg), I’ve always wanted to see what the big deal is. My RTX 2080 works great on my 1440p ultrawide monitor, but I’ve always wanted to test its mettle against true 4K. Now if you’re going to pay for better resolution, you may as well get the bells and whistles too, right? I’m talking about HDR support, high refresh rates, and G-SYNC. Well say hello to the new Acer Predator X28 monitor, with all the fixin’s you could ask for.

Acer has been around for a while, and has catered to the PC gaming market in earnest back over a decade ago. The Predator series has always been one of the top-mentioned brands for serious users, so it’s no surprise that the Predator X28 has so many features that keep it competitive. At an MSRP of $999.99, this is also at a high-end price point. So are you getting the top features for your top dollar? Let’s find out. 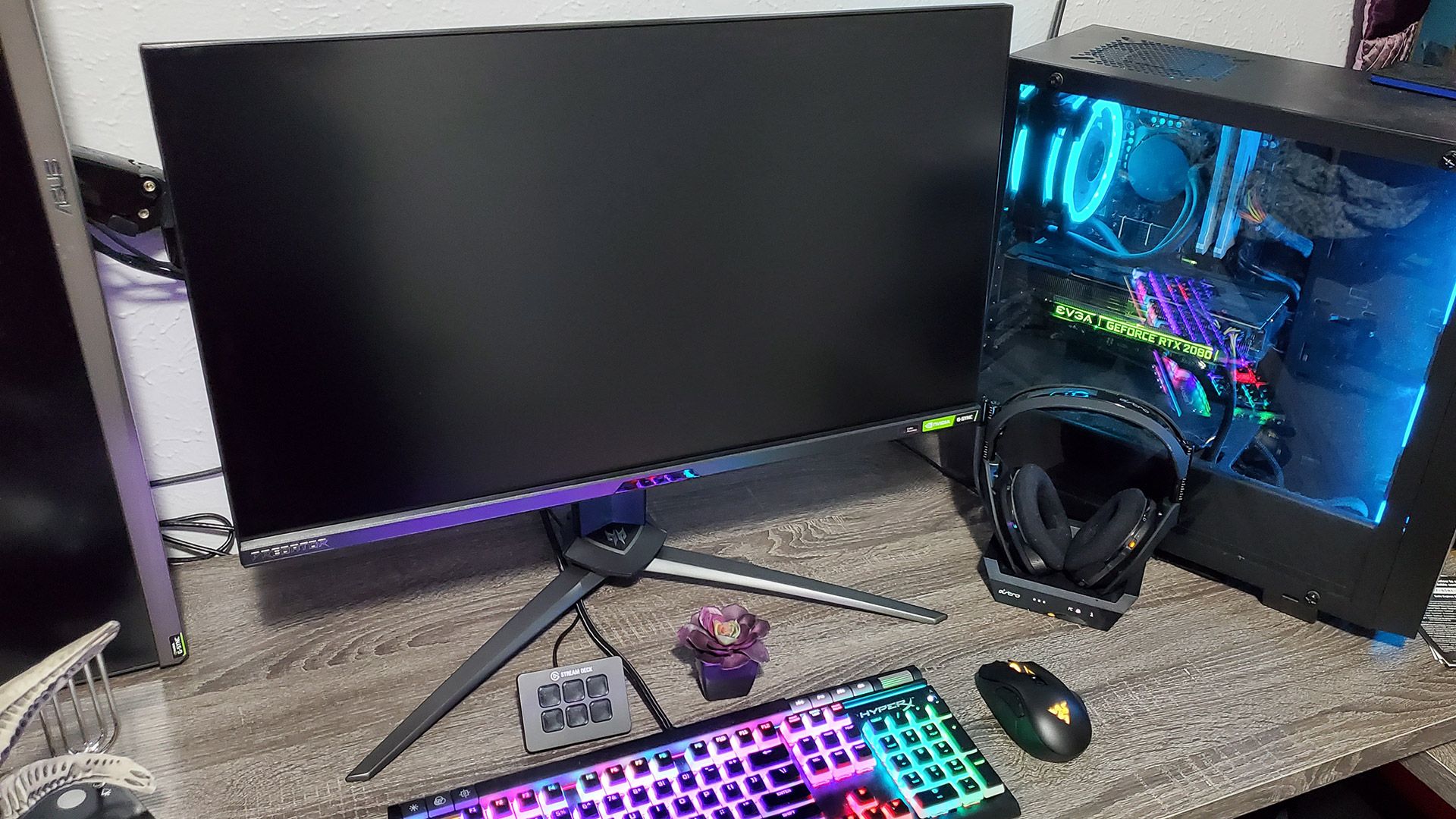 Unboxing the Predator X28 is an unceremonious affair, which is fine by me. It came in a plain cardboard box with minimal marketing and everything was secure inside with styrofoam. The cables, legs, and stand sat on the outside of the styrofoam, while the display itself was packaged tightly inside. Setup was as easy as 1, 2, 3: screw the stand onto the legs, snap the monitor in, and plug in the power cable. Presto! The monitor’s case is a clean, matte black plastic with a classy ‘Acer’ logo on the back and silver-lettered ‘Predator’ on the front corner. The stand is also plastic, with the Predator logo displayed on top and on the bottom, while the metal legs are a gunmetal gray. The design is unobtrusive and lacks any obvious “Gamer” flare, such as LEDs, and would do just as well in a business office as it would in a Twitch streamer’s den.

The 4K resolution is already a winner, but the Predator X28 takes things further with a 144 Hz screen. You can even overclock that to 152Hz via the monitor’s OSD under gaming options. As everyone knows, ‘Frames Win Games' so that extra 8Hz refresh rate is going to make you that much better compared to someone with only a 144Hz screen. But in all seriousness, having a 144Hz display on a 4K monitor is already overkill, no exaggeration; I would’ve been happy with a 120Hz refresh rate. For most gamers, it’s a matter of choosing one monitor over another – high refresh rate or high resolution – but with the X28 (and the right graphics card) you can have both. To top it off, the X28 includes support for Nvidia G-sync 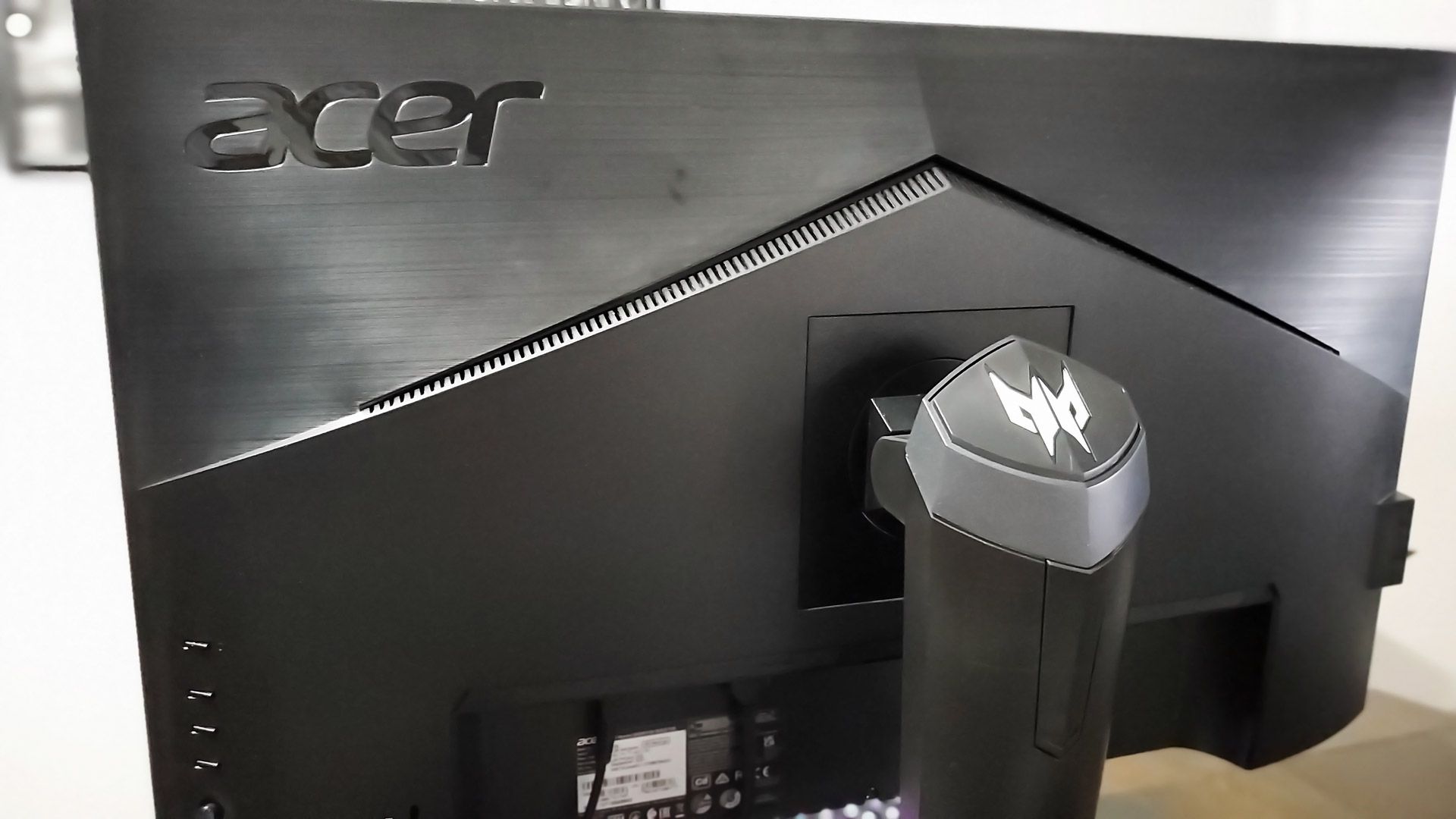 The X in Predator X28 might actually stand for ‘Xtra’, but the 28 definitely refers to the screen size. A 28” screen hits that sweet spot in terms of size and viewing angle, letting you have the feel of a large monitor without being obscene or obnoxious (like my 34” ultrawide). You’re not trying to fit a TV on your desk, after all; there are other options for that. It has a 25” width, so if you do have the desk real estate you could absolutely fit two of these beauties side by side. Talk about overkill, though.

Any bigger and you’d wish that the monitor was curved, too. Thankfully, the IPS (In-Plane Switching) panel type provides excellent viewing angles at just under 180 degrees. Far better than VA or TN panels. Additionally, the Predator X28 also has a 1ms GtG response time, putting it on par with the most TN panels as well, and a color accuracy of 90% DCI-P3 with 1.07 billion color support. By default, the peak brightness is maxed out at 114 nits, but by changing the preset modes (or fiddling around in the OSD yourself) you can turn max brightness on to a maximum of 450 nits. The X28 is a certified DisplayHDR 400 screen, so you can enable HDR in any supported game for more accurate color and contrast (though this is still less than the 1000-nits we consider required for “true HDR”).

Additional features include two USB 3.0 ports on the left side of the monitor for easy access, and two more in the back. The Display Port and both HDMI ports are in the back as well. There are two built-in 2 Watt stereo speakers in the X28, but they may as well have not even been included for as much as I used them (I didn’t). The stand is adjustable up and down and swivels left and right +/- 20 degrees. More importantly, the screen can pivot +/- 90 degrees either way, so you can use it as a vertical 4K monitor in picture-mode if that’s your jam. Even if you don’t use it that way, it was nice to be able to rotate the screen to the side in order to more easily plug in DP/HDMI and USB cables into the back during setup. And, of course, there’s the option to mount it as well with a standard 100 x 100 mm VESA mount.

In order to get the most out of the Acer Predator X28 out of the box, there is a little bit of setup required. By default, when I unboxed it, the Predator was looking quite dim and washed out. As it turns out, this was because the Eco mode was selected by default - which lowered the max peak brightness and enabled energy-saving options that diminished the color. The ‘Graphics’ mode is already set up to get the best out of the monitor without any extra finagling. I did feel the need to adjust a few more aspects however, like enabling the Overclock to get that extra 8 Hz refresh rate and maxing out the peak brightness.

Accessing the OSD to change these options is similar to other Acer monitors. There’s the classic analog stick control with accompanying buttons right on the back-right side of the monitor. Clicking in the stick access the OSD, and the controls are labeled right there as to what buttons do what. Other nifty options in the OSD include adding the refresh rate number on screen so you can see how many frames you’re getting, and an aim crosshair for putting a target on-screen for you FPS players that want to ‘360 no-scope’ or whatever it is you crazy kids do nowadays.There’s a full suite of other Picture options including a Blue Light Filter, Dark Boost, SDR/HDR Variable Backlight option, Backlight Response, and a LightSense option which will automatically adjust the brightness to suit your environment. A nifty feature is the ProxiSense option that lets the Predator detect its prey you and will go into a sleep mode where it dims the brightness, or go turn off the screen until you return. Unfortunately, it didn’t seem to detect me, and would just go to sleep after a couple of minutes. It was unclear how to get it to recognize me either, as I would just wave my arms in front of it to no avail. Touching the OSD options would wake it up, though.

In tests for ghosting, there was a discernible variance between different refresh rates, although less so between the 144 Hz and 152 Hz options. The most revealing difference was in choosing different Overdrive modes. In the OSD there are options to set the Overdrive to Off, Normal, or Extreme. This Overdrive feature improves the native GtG response times, but the ghosting is so bad when set to Extreme that the colors will invert because of it leaving a distinct image behind. For this reason, I would never recommend using the Overdrive mode in Extreme mode - keep it either on Normal or Off completely.

A minor scare that I had after testing the UFO ghosting was a burn-in that had occurred on the screen. The small white pixels that separate the UFOs got temporarily burned into the screen. Luckily this went away after about thirty minutes or so of switching over to a vibrantly colored video game, which helped the pixels oscillate between colors and repair itself.

The only main issue that I have with the Acer Predator X28 is that the HDMI ports on the monitor aren’t HDMI 2.1, they’re only the lesser 2.0b. What does this mean? Essentially, the maximum refresh rate at 4K over an HDMI 2.0b cable is locked at 60 Hz. What’s even the point, right? This also means that your sparkly new PlayStation 5 and shiny Xbox Series X consoles are also locked at 60 Hz and games that support 120 Hz modes wouldn’t receive that benefit. Tough luck for anyone looking for a monitor to do both PC and console gaming. 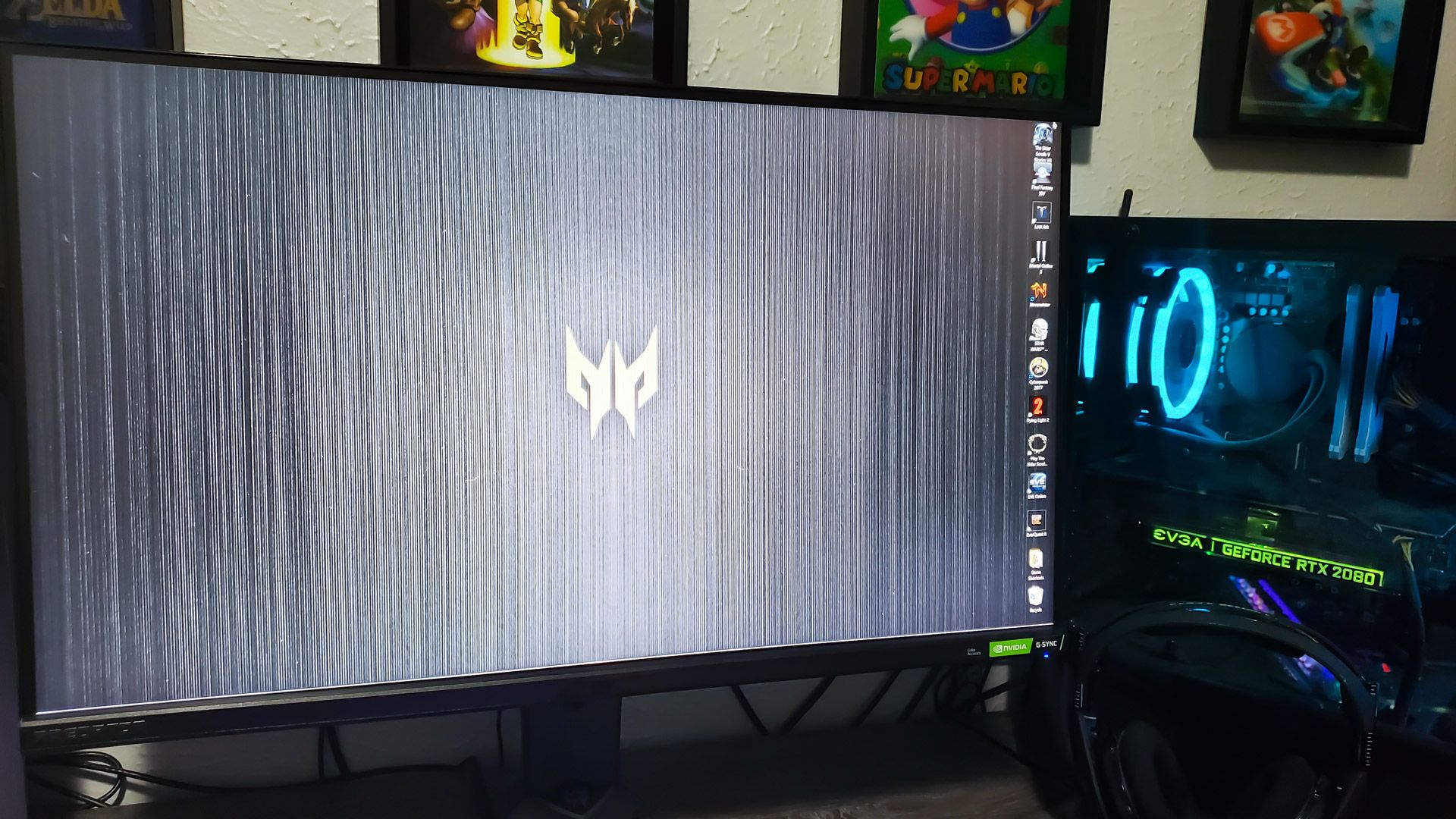 The Acer Predator X28 is a beast of a monitor with both 4K resolution and a refresh rate of up to 152Hz. The price point coming in a penny shy of a grand means that you’re paying for that performance, though. Anyone with a PC powerful enough to run games at 4K 152Hz can probably afford it anyways. Even still, this monitor manages to be more expensive than certain competitors which offer a better HDR experience for the money. The Gigabyte FV43U’s 43-inch panel is closer to a TV than a gaming monitor, but at $899 ($799 including rebate), it offers an all-around better experience than the X28 can currently offer.

But then, it’s the 28-inch screen that makes this more appealing as an actual monitor versus a little TV. At 28” this Predator will sit comfortably at just about any desk without being overly dominant. Why choose between a monitor with higher refresh rate or one with higher resolution, when you can just have both? If you’re looking to upgrade to 4K, and aren’t looking to settle, then the Acer Predator X28 is a definite contender, assuming you don’t mind paying a bit extra.

The product described in this article was sent on loan from the manufacturer for evaluation purposes.