I’ve longed for an ultrawide monitor for quite some time now. My set up consists of two varied-sized monitors competing for real estate on my desk, and while it works it’s not as seamless as I would like. So when Acer gave us the opportunity to checkout their AOPEN 43XV1C 43” Ultrawide monitor, I jumped at the chance to finally see if the format would make my normal workflow – and gaming sessions – all the better for it.

At first glance, I wasn’t sure if the 43” frame of the AOPEN Ultrawide monitor was going to adequately sit on my main work desk. When I unboxed the monitor (which was carefully packaged using foam, and even with the box taking some damage in shipping there wasn’t any to the monitor itself), I found myself immediately breaking out the tape measurer to make sure it would fit here – otherwise I’d find myself working from the desk in my bedroom for the foreseeable future.

Thankfully, not only did the monitor fit the space, but it does so perfectly. The monitor itself is pretty heavy, but the large legs of the accompanying stand help to keep it from toppling over under its own weight. I appreciate too that the monitor is mountable on a VESA compatible mount as well, giving more options to those who prefer to not have their monitors taking up real estate on the desk itself.

One thing I was shocked to see was that the monitor itself wasn’t curved like many ultrawide 32:9 monitors are. The curve, both in theory and practice, is meant to help with periphery while working and especially gaming. The sheer size of the monitor meant that there would be details I’d be missing out of the corners as a result of there not being a curve in the monitor, but more on that later. 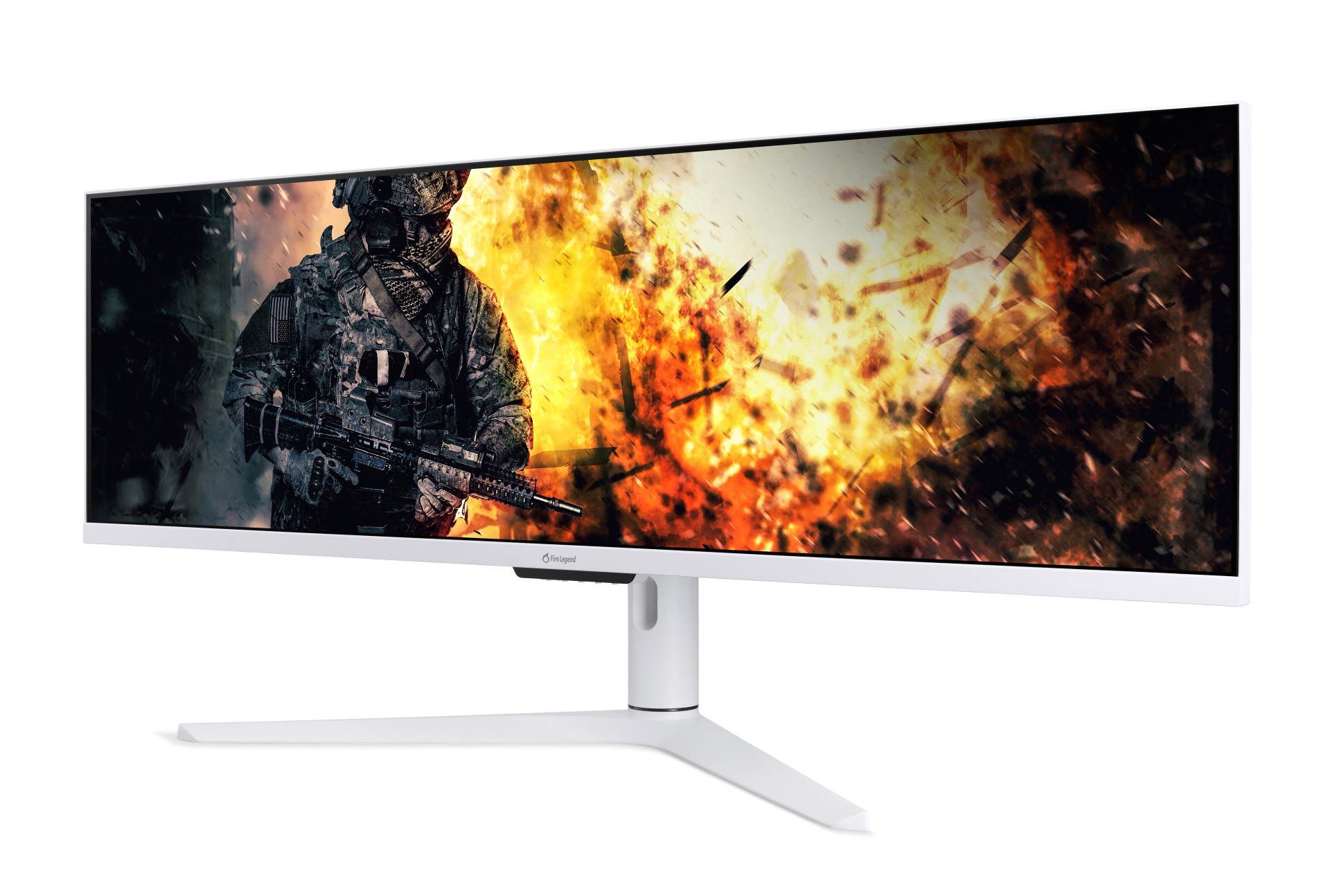 I am happy to report that there doesn’t seem to be a bad viewing angle on the AOPEN Widescreen monitor, and the monitor is both tilt and height adjustable – something that should not be taken for granted. This is largely due to the IPS panel, which helps give a broad range of viewing angles versus a TN paneled monitor. I was able to get the perfect viewing angle at my desk and just leave it be, both when sitting and standing at the workstation thanks to these adjustments – something my Acer Predator 32” 4K monitor doesn’t really do all that well (since there is not height adjustment on the thing).

The panel itself looks crisp, the colors popping quite well even out of the box. After some calibration using the on-board menu, as well as setting up color settings in Nvidia Control panel I was able to get the monitor where I wanted it – and it looks incredible. The deep blacks don’t seem crushed in some scenes, while the whites and lighter colors don’t stick out harshly when a scene is illuminated fully. It’s a great balance when in standard definition.

However, while the monitor does support HDR, the 400nits max brightness doesn’t do much to add to the experience, so I found myself mostly keeping this turned off. It’s just not bright enough for it to transform a scene. It’s serviceable though, but nothing to really call home about in a PC gaming monitor, especially when you consider 1000nit monitors are starting to hit the scene more and more nowadays.

But how does it game?

One of my chief concerns when using the monitor after discovering there was no curve in the frame was whether or not I’d miss the detail that would come with my entire field of view being engulfed in the monitor itself. And for this it felt kind of hit or miss, depending on the game.

For our recent Deathloop review, I used the Acer AOPEN 43XV1C P for the whole 20 or so hours I spent in Blackreef, and man it felt great in motion. The 120Hz refresh really adds so much to gameplay – games are just better at higher framerates. Additionally, setting up my Nvidia RTX 3080 Ti to use the variable refresh rate on the AOPEN monitor was a breeze as its seen as a GSync compatible monitor. 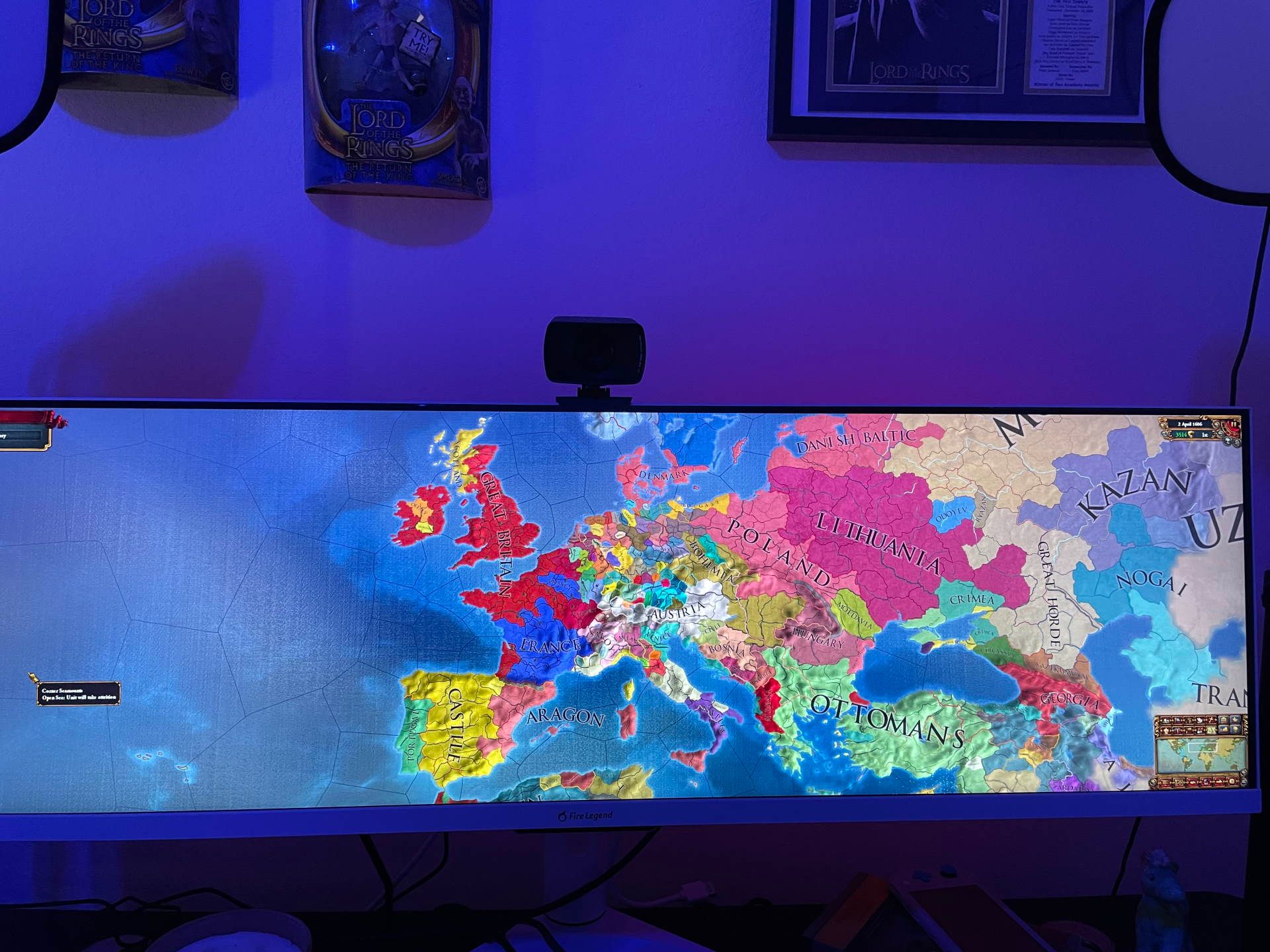 However, I did notice during my gameplay sessions that I would turn my head to see my health and mana bars, or to peek around a corner if it wasn’t in the exact middle of the screen. These were minor inconvenience, especially the UI aspect as I wasn’t able to move it to a more easily accessible spot in my vision, but I feel having a curve here would have been a benefit.

However, in games like Europa Universalis IV and Crusader Kings III – two games that excel at having an ultrawide aspect ration to splay their detailed maps upon – it wasn’t an issue. This could simply be down to there not being the fast paced action of Deathloop, but I’ve spent close to 40 hours over the last month pouring over EU4 on this monitor and I’m not sure I ever want to go back now. The extra real estate is just such a game changer.

Where this was keenly felt as well was in productivity tasks during the work day. While it wasn’t too different than my normal two monitor set up, I was able to have windows upon windows thrown up on the screen, though I was able to transition seamlessly through each without the break of a bezel. This was most noticeable during moments where I was editing video on an Adobe Premiere Pro timeline. The extra space the monitor affords was a game changer for editing and content creation – something I’m surely going to miss once I go back to my normal set up.

One area I feel conflicted on here is resolution. My major fear when playing games at 3840x1080 was a screen door effect – the pixel density just wouldn’t be there. And while I’m happy to say that in my close to 100 hours of gaming and countless hours working on this monitor I’ve never experienced the screen door, I do wish there were just more pixels to play with here. 1080p does feel limiting, especially on a monitor that runs close to $800. Ideally this would be 1400p for my personal preference, but I understand for many 3840x1080 will be enough to play with in the end.

So what do we make of all this? The Acer AOPEN 43XV1C P is a fantastic ultrawide monitor. It’s the perfect size at 43” to take up most the space in most set-ups I’d wager, and the high refresh rate, AMD FreeSync technology and entry level HDR400 make for a compelling package.

However, I can’t get past that I feel this would be a better package if the resolution was just a bit higher, as well as a curve to help with periphery viewing angles. However, these are personal preferences and not really an issue with the monitor itself in the end.

The Acer AOPEN 43XV1C P performs admirably, its high refresh rates helping take games to another level of performance for those with rigs who can power the amount of pixels on offer. Both the actual size of the monitor and the aspect ration make working day-to-day on the monitor a treat as well, and it actually improved my workflow considerably over the last month. I won’t be able to use Adobe Premiere Pro again without longing for the real estate on this monitor.

As a gaming monitor too it works quite well and most games have started to embrace 32:9 as a supported format. No game I played during our month-long test of the monitor was unplayable on the ultrawide – and some games like Europa Universalis IV and EVE Online benefitted from this. Running through Rivendell in The Lord of the Rings Online was a treat as well, giving me more of a window into the Elven valley than I had previously seen in the 14 years since the MMO has been in operation.

But in the end, is it worth the price of admission? At $749.99, this is not a cheap monitor, though it’s not outrageously priced when you consider the rest of the 32:9 ultrawide market, though you do start to see some super ultrawide monitors from the competition sit just about $50 higher. At the end of the day, it’s an investment that will last for quite some time and doesn’t feel too punishing for the quality of the monitor.

All in all, it depends on what your need is when deciding if this monitor is right for you. It ticks almost all the boxes I want from an ultrawide monitor: it looks good, the refresh rate is sufficiently high, and it ultimately improves both my working and gaming experience for the better. While I would love a little higher resolution and a curve, they aren’t deal breakers. The Acer AOPEN 43XV1C P is a great monitor, and one that you should keep on your radar if you’re looking for an ultrawide to grace your PC setup.