UPDATE: The original article referenced a price of $319. This was based on a listing that turned out to be incorrect. The price of this keyboard is $239 (much more reasonable) and the article has been updated accordingly. This is the correct Amazon link.

In a world of me-toos, they ABKO AR87 stands apart. That’s a rare thing for a keyboard these days as everyone and their brother seem to be joining the peripheral market to capitalize on the PC gaming surge. Yet, with a solid anodized aluminum case clocking in just under seven pounds, it makes an immediate impression. In fact, some might say it’s as close to a custom as a production keyboard can come. But, at $239, it carries a hefty price tag. 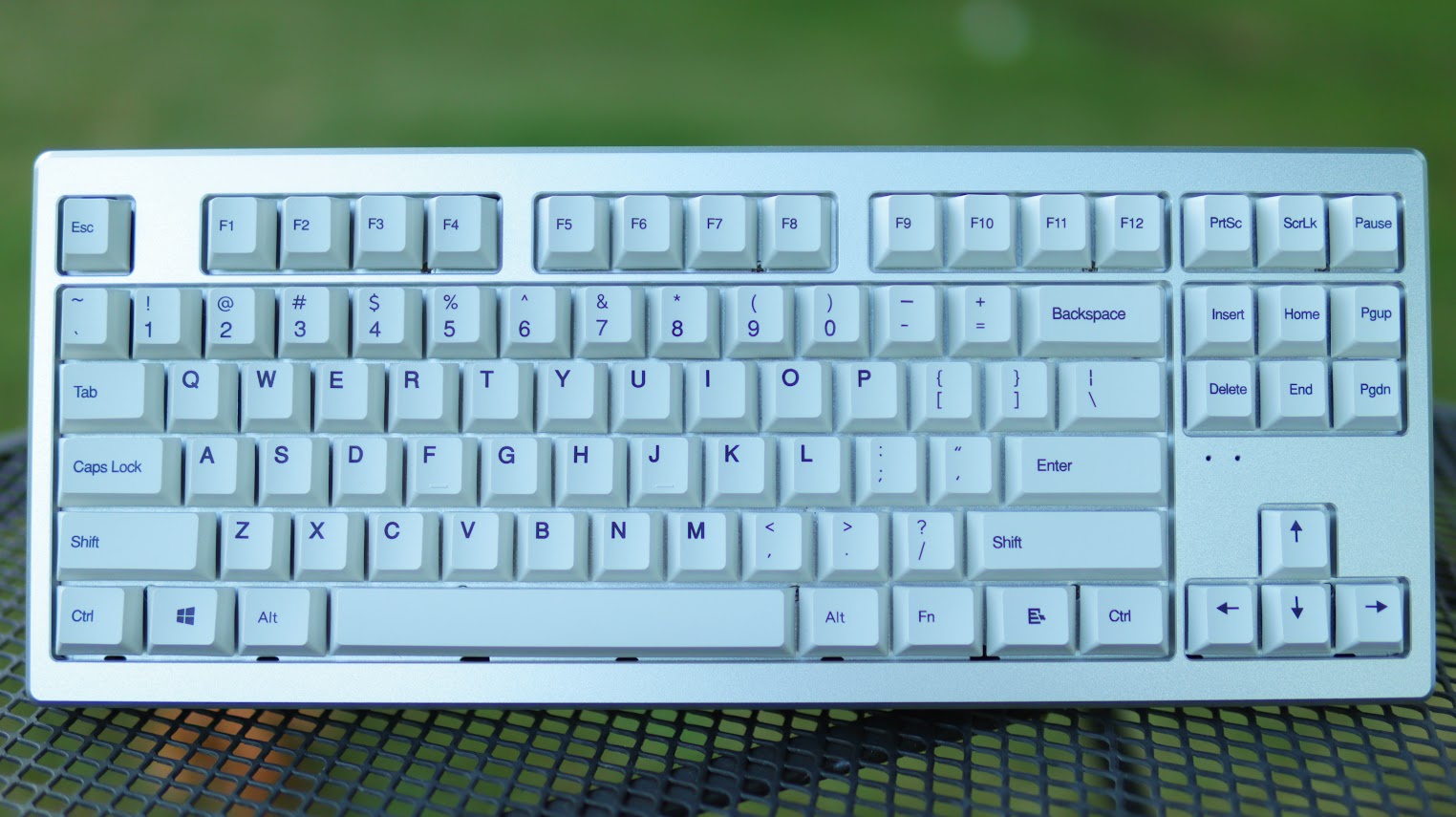 ABKO, or Abkoncore, is a relatively new brand name, established in 2018, but the company is no newcomer to the technology world. In fact, it’s been in operation since 2001 as ABSOLUTE KOREA, operating in a number of different sectors, from peripherals to graphics cards. With Abkoncore, or ABKO, it has its sights firmly set on the PC gaming community, delivering everything from keyboards and mice to cases and power supplies.

Even within its own product catalog, the AR87 stands apart. Heck, amongst virtually all production keyboards, the AR87 stands apart. I’ve reviewed close to a hundred at this point and have never encountered a keyboard as heavy duty. The case is made of dual pieces of CNC-milled aluminum and an aluminum plate to hold the switches and circuit board. The sandblasted finish is excellent and the anodization consistent throughout. It’s a very well done case and so incredibly durable that a drop is more likely to damage the floor than the keyboard.

The AR87 features a standard TKL layout. The two-piece case has fairly thin bezels, so the overall footprint is fairly compact. This is the first TKL keyboard I’ve spent major time with in quite a while, but I had no trouble getting used to it thanks to its completely traditional layout. That also means that swapping out keycaps is very easy as just about any keycap set will work with it. 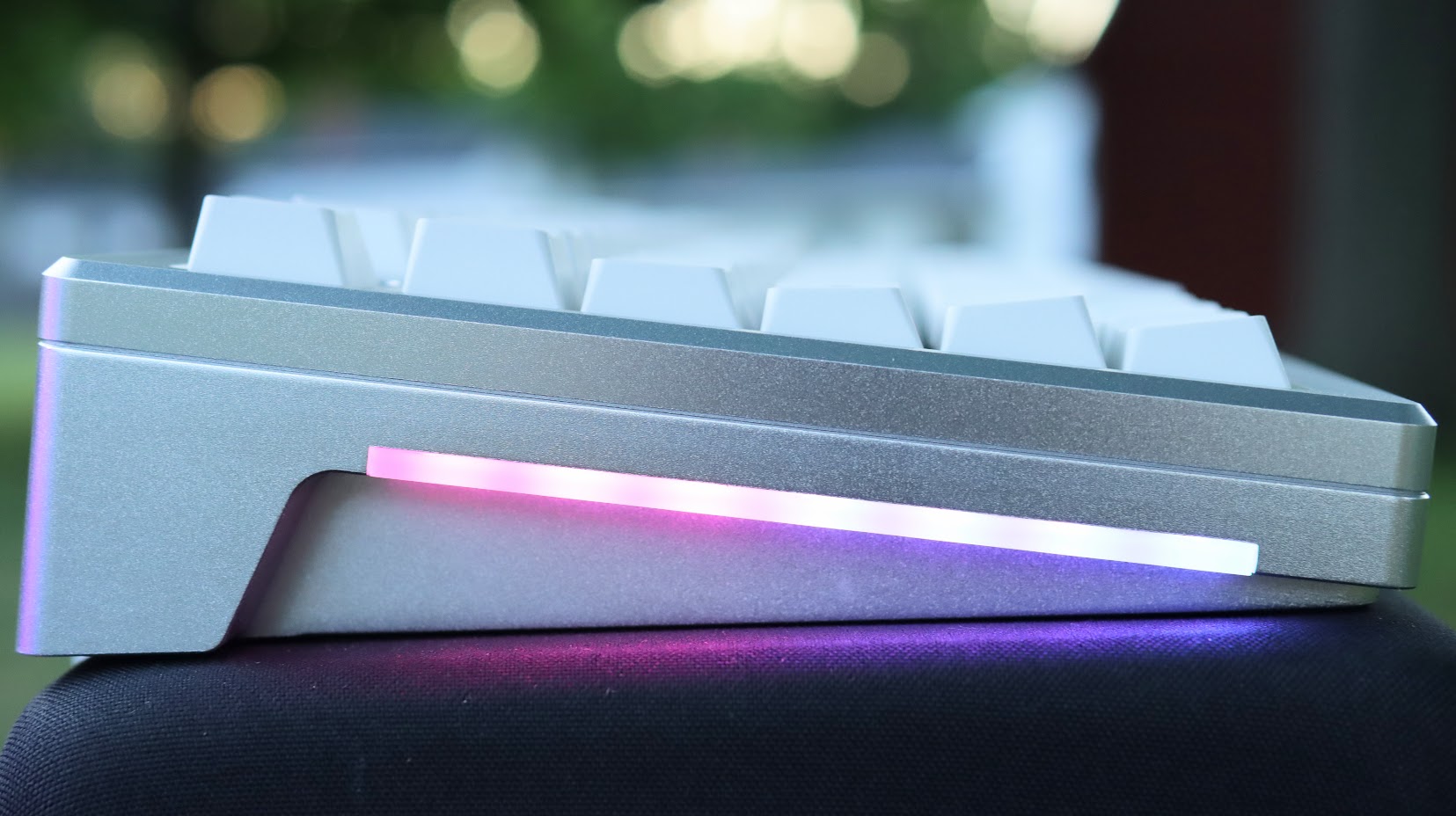 It’s also just clean. The silver and white go great together, almost like an Apple peripheral — and yes, this does offer Mac support. There’s no RGB backlighting. Instead, there are two small RGB strips on either side. They’re side-projecting, so they throw a cool underglow that will cycle a spectrum or display one of eight static colors. It’s a good middle ground between the “RGB everywhere!” approach in the PC hardware world today and being completely without frills. Even without the RGB, the side profile has a striking cutout that lends the board some style.

The switches and keycaps upon them are equally high quality. The board uses genuine Cherry switches, available in Red, Blue, Brown, Black, or Silent Red. The version I tested used Cherry brown switches, which offer a light tactility and low actuation force, which is great for both gaming and writing. At this price point, I was surprised to see that the board didn’t offer hot-swap sockets, which allow you to change switches without desoldering. Still, Cherry carries a pedigree that’s hard to top in the production keyboard world. 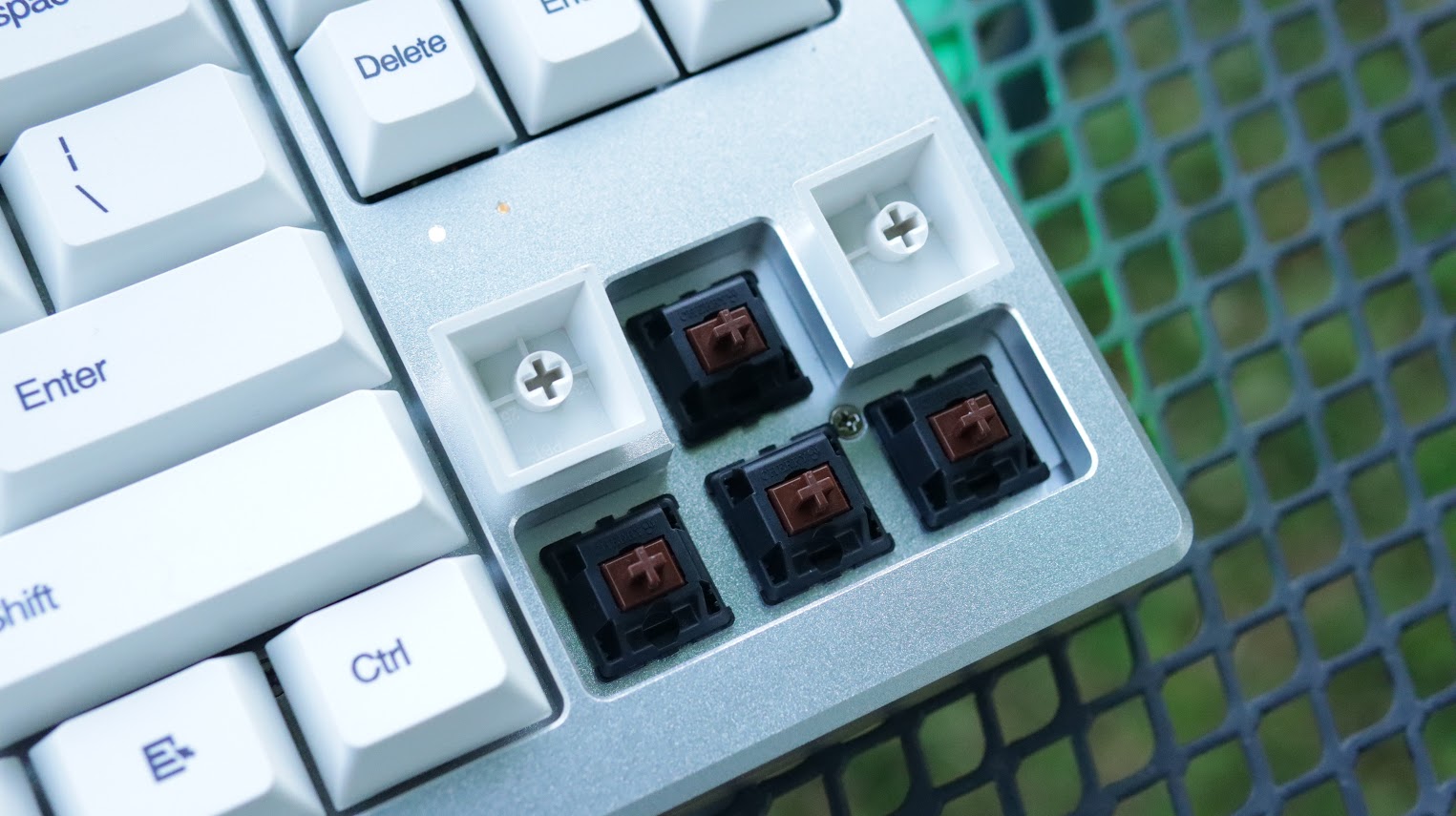 The keycaps are PBT and have dye-sublimated legends. PBT is known for its higher density and slightly textured surface, which will help ensure they don’t shine and of show finger oils. The legends are also guaranteed to last for many years exactly as they appear out of the box. The walls on the caps are thick, which makes typing and gaming feel more substantial and less hollow.

Which brings me to the typing and gaming experience. It is, without any reservation, the best feeling and sounding premade keyboard I’ve ever used. Heavy aluminum cases usually do a good job of deadening out typing sounds, but the AR87 goes a step further by mounting the plate to the bottom of the case and then adding sound dampening foam on top of that.

I know — what does plate mount matter? We’re into the weeds in keyboard stuff now, but hear me out. While most keyboards use a plastic shell or, if aluminum, mount the switch plate to the top half, you wind up with the sound of your keycaps traveling through empty air and reverberating, amplifying, in the case itself. By attaching this plate to the bottom, it sends those vibrations right into the bottom shell itself, giving the keyboard a much more solid feel and high-pitched sound. Imagine gently tapping a keycap on a granite countertop. It’s a bit like that. 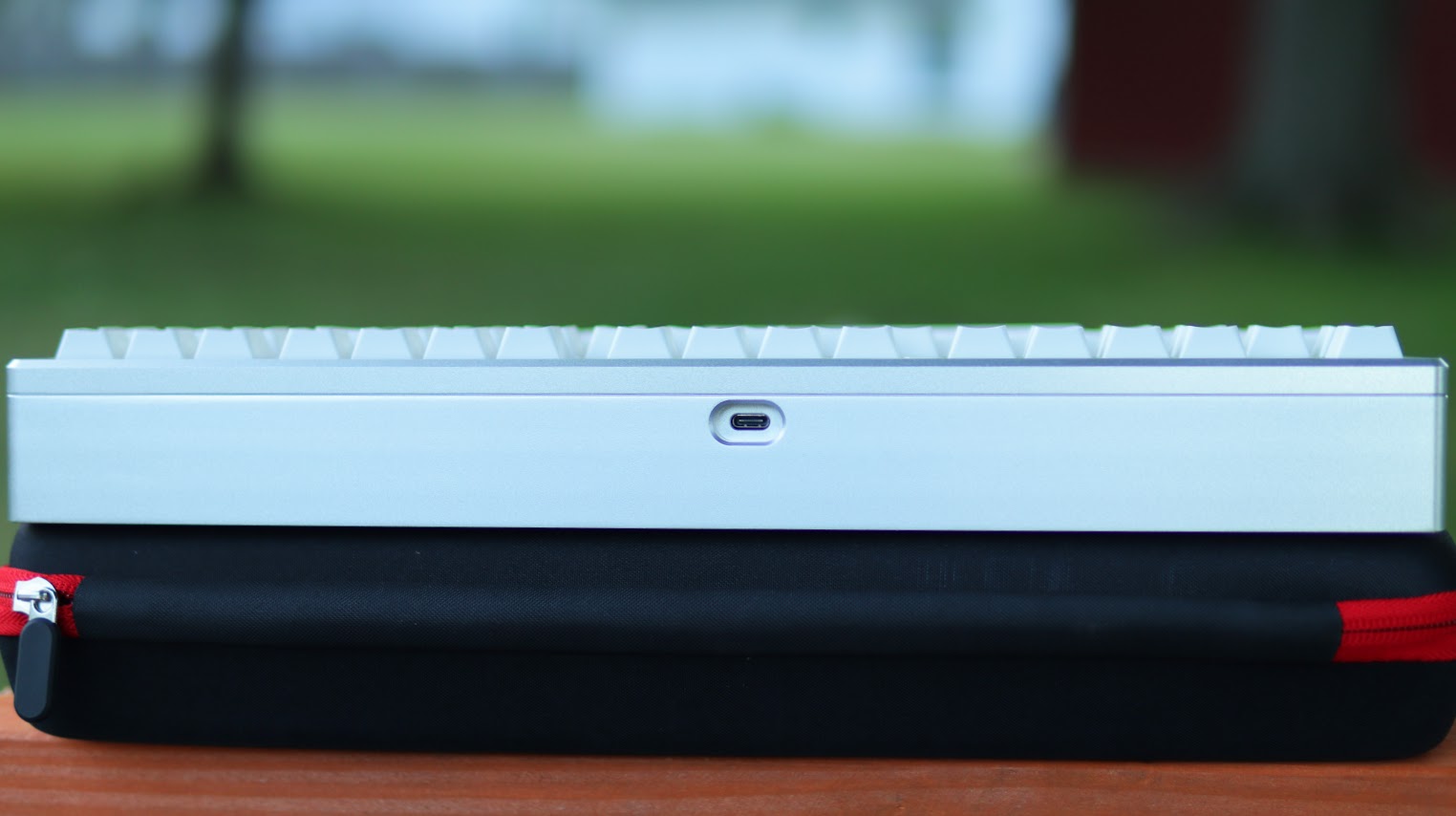 It’s so good, this is the first keyboard that’s ever driven me to lube my key switches to push the experience even further. I spent three evenings pressing switches down and painting the inside with Krytox 205g0 over episodes of Lost because I knew this was a keyboard that would be in my daily rotation from here on out. This truly is custom territory in sound and feel.

You may have noticed a case in some of the pictures so far. That comes included with every keyboard, a nice, semi-hardback black and red zipper case. You’ll also receive a keycap puller, a small cleaning brush, a one-page user manual, and the braided USB C cable. 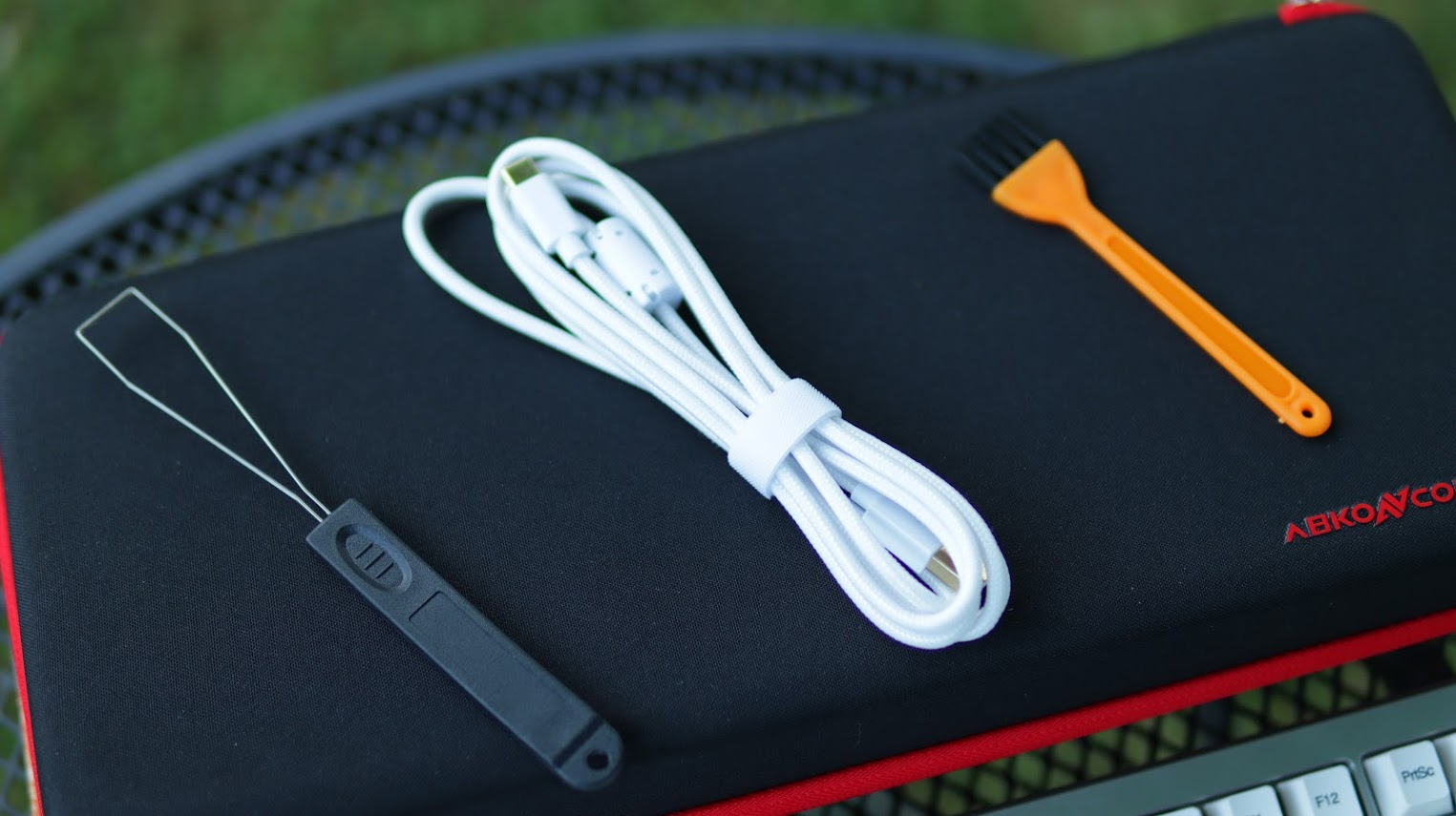 For gaming, the AR87 is just as responsive as any gaming keyboard on the market today. It features a 1ms response rate, N-key rollover, and anti-ghosting. You’ll also find embedded media controls tied to the Fn commands, so you can adjust your volume and control your music on the fly. What it doesn’t feature is its greatest drawback: programmability.

For the price and the company’s emphasis on its responsiveness for gaming, I am shocked that it doesn’t allow any kind of key remapping or macro programming. If you want these features, you’ll need to turn to programs like AutoHotKey or Sharpkeys. 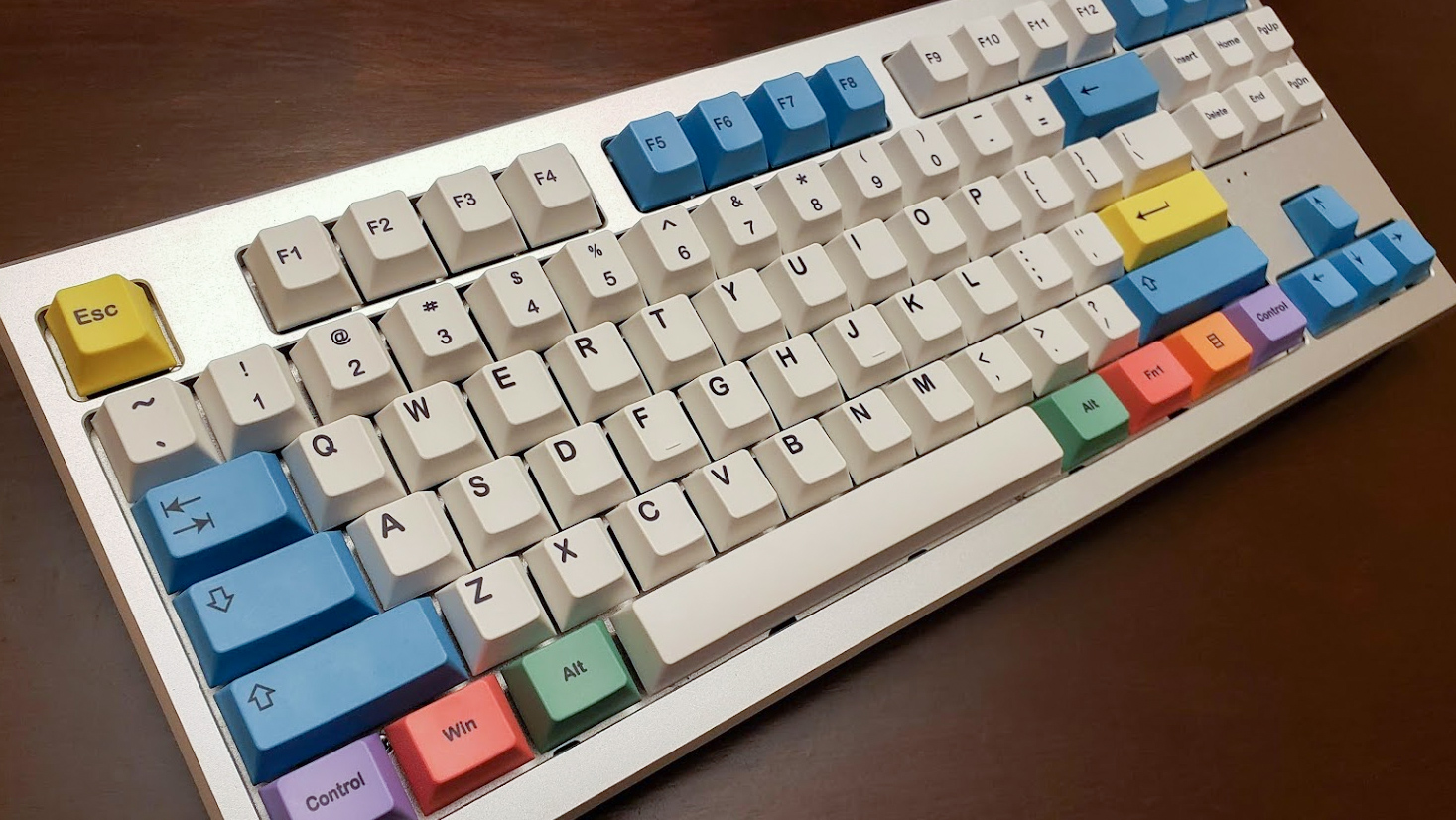 Despite its lack of programmability, the ABKO AR87 is so excellent in every other way that it has made its way into my rotation for good. When it comes to build quality and how it feels and sounds to use, it puts every single gaming keyboard I’ve used to shame.

Is it worth $239? For pure gaming, probably not. Without any kind of programmability, it’s at a pretty severe disadvantage to the Logitechs and Razers of the world. Instead, this keyboard feels like a bridge between the premade and custom keyboard worlds. If you’ve been on the fence about building one for yourself but aren’t comfortable soldering, or just want to see what all the fuss is about, the AR87 is an excellent way to find out without spending custom keyboard prices. That means it won’t be for everybody, but it’s hard to imagine anybody not finding this keyboard outstanding.

The product described in this review was provided by the manufacturer for evaluation purposes.
9.0Amazing
Pros
Cons
Tags
Mechanical Keyboards
Peripherals