1More is back with its latest flagship true wireless earbuds, the 1More Evo. These new buds sport all of the features you could hope for: great sound, active noise cancellation, good battery life, multipoint connect and more. They aim to one-up the competition with custom sound that adapts to every listener, AI-enhanced call clarity, and LDAC support. At $169.99, they slide in under the price of the competition, but do they have the chops to compete with the current industry leaders? Find out in our review!

The 1More Evo true wireless earbuds are feature-rich flagship earbuds that aim to deliver a lot at a discount. That would be a tall order for most brands, but 1More has developed a track record for doing exactly that. On paper, this new headset has feature parity with many of its biggest competitors: Active noise cancellation, wear sensors, multipoint connectivity, impressive aesthetics and build quality… the works. While most of the competition, including the Apple AirPods Pro, Sennheiser Momentum 3 True Wireless, Sony WF1000-XM4, and Jabra Elite 7 Pro each start around $200 or higher, the Evos come in at $169. 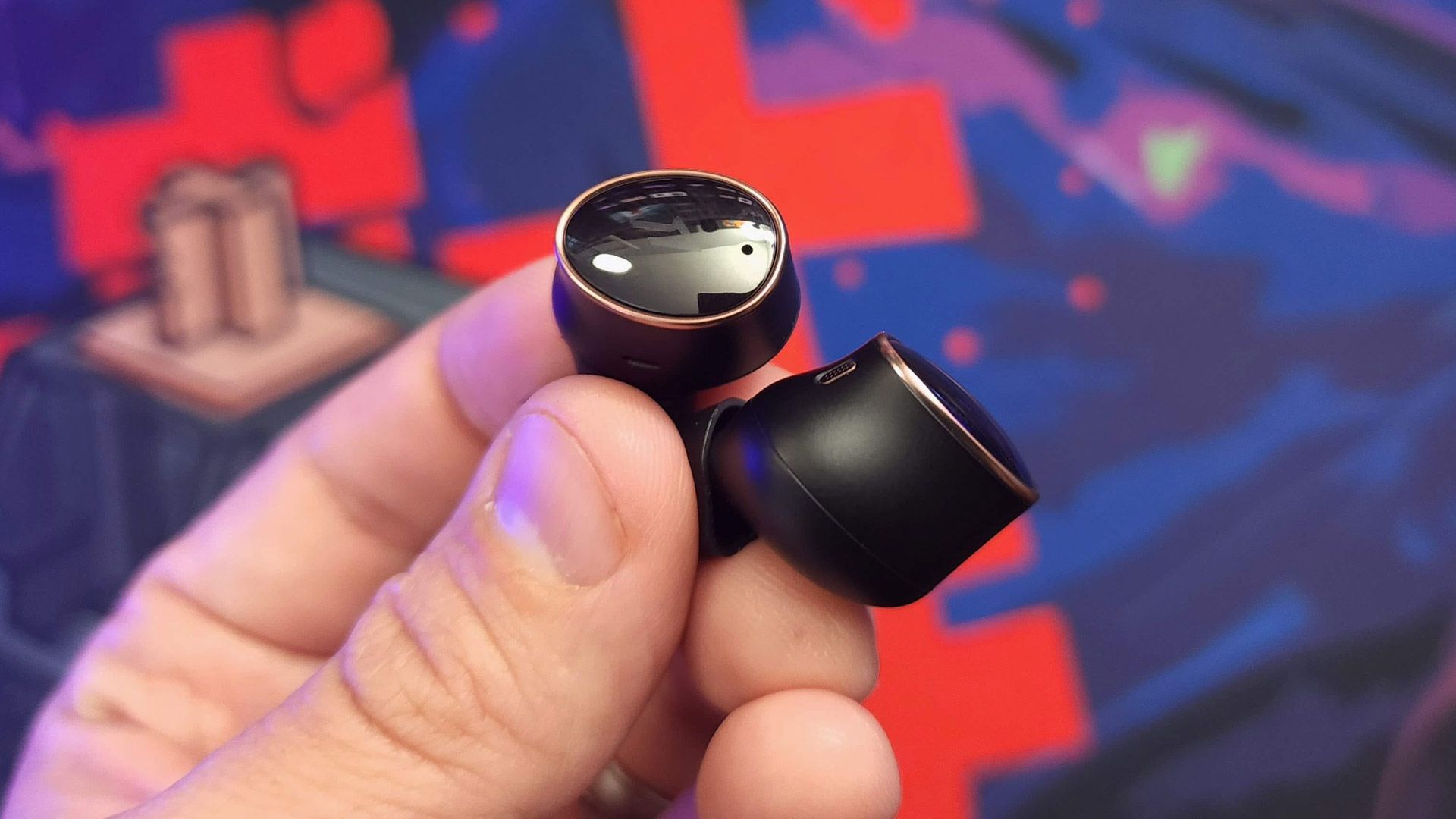 The first thing that stood out to me about these new earbuds is their unique look. The buds are a mix of matte and glossy black trimmed with copper accents. This style carries through to the charging case, which is black with a copper 1More logo on its lid. I love this combination, personally, but the buds are also available in white and gold if that’s more up your alley. 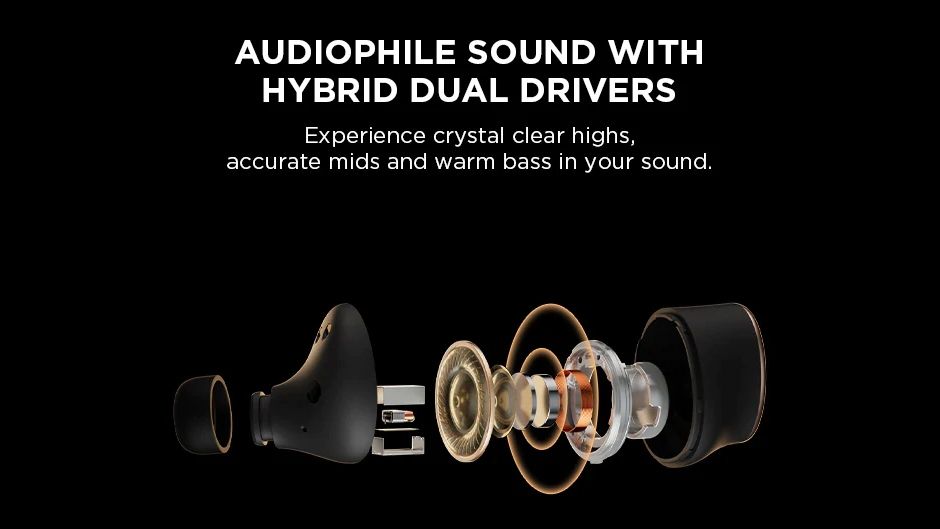 Inside those gorgeous shells, they feature a hybrid driver setup. The frequency spectrum is split between a large 10mm dynamic driver and a balanced armature. This arrangement has been popular in the hi-fi world for some time, and it makes sense why when you hear it. By mixing two driver types, each is able to focus on a portion of the frequency spectrum and hone in on what it does best. For the dynamic driver, that’s the bass and mids. The balanced armature comes in and smooths the transition between registers while adding more detail and clarity to the highs.

The buds are packed with technology. Foremost among these is 1More’s active noise cancellation tech, QuietMax. The company quotes up to 42dB of noise reduction, which is impressive in its own right, but feels more so if you plan on using these outside of your commute. QuietMax effectively targets a portion of the mid-range, quieting down voice and keyboard noise for office environments. This mode also has adjustable levels that include Strong, Mild, Wind Noise Reduction, and an Adaptive Mode that will monitor the noise in your surroundings and adjust ANC to match. Is the ANC going to dethrone the AirPods Pro or Sony WF-1000XM4s? No, probably not, but it’s still quite good and costs much less.

The transparency mode is also very well done. While many TWS earbuds have a tendency to make the outside world sound thin with their transparency mode enabled, the 1More Evo’s sound more true to life. There were times working at my computer where I forgot I had it enabled and was listening to microphone passthrough.

The buds also feature multipoint connectivity. If you like to connect your buds to your PC but also be free to take calls, this is almost a must-have feature. It’s not enabled by default, but can be turned on inside the 1More Music app, hidden under Experimental Features.

Controlling the Evos is done through customizable touch controls. Double and triple taps can each be customized, but out of the box double tap handles play and pause (or answering/ending calls), while triple tap summons your virtual assistant. Either can be customized to navigate tracks or control volume, but it’s not possible to have all three, so something is going to be left at the side. Holding either earbud cycles through the three listening modes: ANC, Transparency, and Off.

There are no traditional EQ options built into the app. Instead, the Evo’s have incorporated Sonarworks’ SoundID system. SoundID is a series of A/B tests using a music sample and the answers come together to form a custom EQ curve based on your listening preferences. It’s a novel idea and works well here, but I’ve also found that SoundID can be inconsistent. On some headphones, like the Drop Pandas, it was game-changing, but on others I flat out didn’t like the way it changed my sound. Part of the issue is that it doesn’t allow you to use your own music like Sennheiser’s Sound Check applet does. On the 1More Evo’s, it was the former situation for me, and I can’t go back to listening to the Evo’s without my SoundID profile.

The configuration of the buds clearly shows that 1More is targeted high-res sound here, but the inclusion of LDAC proves it. LDAC is Sony’s proprietary high-res wireless codec and offers some of the best wireless audio currently possible. If you have an Android phone, your device probably already supports it. The downside is that it increases battery drain, and with a 5.5 hour battery life with ANC on — which is decent but not groundbreaking —  there’s not a lot to spare. If you’re not an audiophile, you likely won’t notice much of a difference, so it’s safe to leave this disabled and go with the stock sound which is already quite good. If you do fall into that camp, then you already know how nice it is to see 1More include this option for more critical listening sessions.

Before getting into the sound, a word needs to be devoted to the case. It’s metal and uses strong magnets, so you can count on it keeping your earbuds safe when jostling around in your bag. There’s enough juice there to recharge your earbuds a little more than three times, bringing total playtime to 28 hours with ANC off (8 hours of listening per charge) and 20 hours with ANC on (5.5 hours per charge). The case also supports fast charging, so if you do run dry, 15 minutes in the case will restore four hours of listening. The downside to this case is that it scuffs very easily. Even in a pocket with pens, I would routinely find little white scrape marks. They could be rubbed out, but it’s an oddly high maintenance case.

I’ve been living with the Evo’s for a bit over two weeks. During that time, I’ve listened to a wide range of music, played some games, and enjoyed more than a few hours of podcasts and audiobooks. The detail and clarity on these buds is great, even without LDAC enabled, and they’re comfortable to wear even over long listening sessions.

The first thing that needs to be said is that it’s absolutely worth playing with SoundID. Though my results have been mixed on past earbuds, the resulting EQ profile the applet generated completely elevated the listening experience, adding more bass, more detail, and more volume. I did have to take the test several times using different music samples to dial it in (my first result was way off the mark and drowning in bass), but once I had it dialed in, I couldn’t go back to the stock sound. Though I wish they had a normal equalizer, leaning on SoundID allows 1More to deliver a custom listening experience to every user. 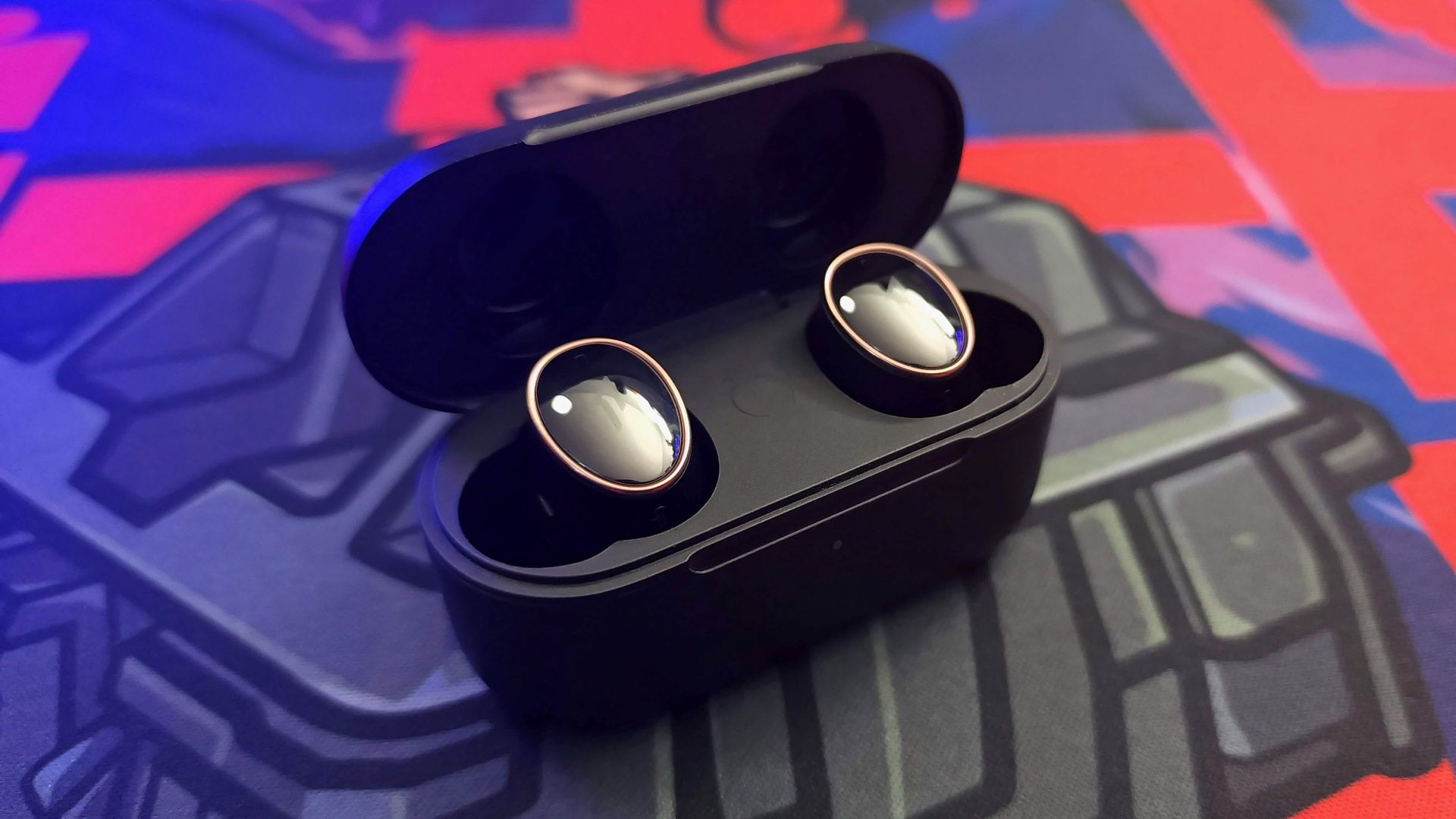 With that sound dialed in, I found the bass to be tight and bold. The dynamic driver does a good job of making sure kick drums and bass lines are tight and fast, making them a good fit for both hip-hop and heavy metal. Vocals come forward, allowing singers to shine, but aren’t sibilant or sharp. Treble notes, like high hats and cymbals, have realistic attack and decay. They’re on the warm side of balanced, but very fun to listen to. Your results may vary depending on how SoundID impacts your sound, but it’s clear that the drivers are very capable of delivering a fun sound for music, movies, or games.

The ANC performance is very good. In its Strong setting, the buds are able to block out a surprising amount of noise. I don’t take a train or bus to work, but do often work around droning HVAC systems and fans which QuietMax completely eliminates. It’s also good for blocking out mild amounts of conversation and typing noise for office settings. Add in some music and you can easily block out the outside world. 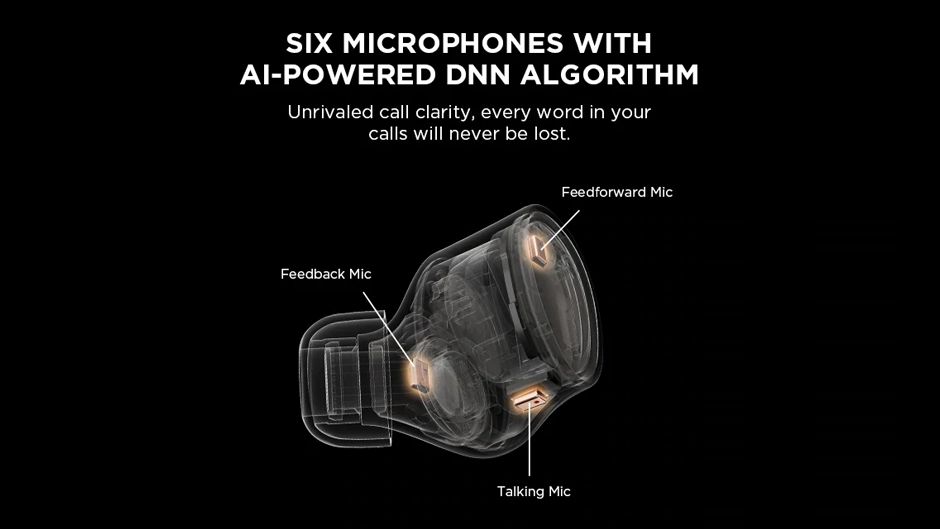 Call quality is also pretty good. My wife was able to hear me clearly, even with engine noise in the background. The buds were able to block out that external noise very well. In recordings, I sounded a bit thin, but overall clear and easily understood.

While the Evo’s are easy to control without accidentally triggering touches, they suffer from a lack of audible feedback. With the current firmware, only changing listening modes provides audible feedback. Playing or pausing music or changing volume is silent. It’s hardly a major issue, but more than once I re-paused a track thinking my first attempt didn’t register. It would also be nice if 1More gave users the option to use single touch commands if they chose. It may result in more accidental touches, but would also mean users could have play/pause, track controls, and volume at their fingertips without needing to pull out the phone. 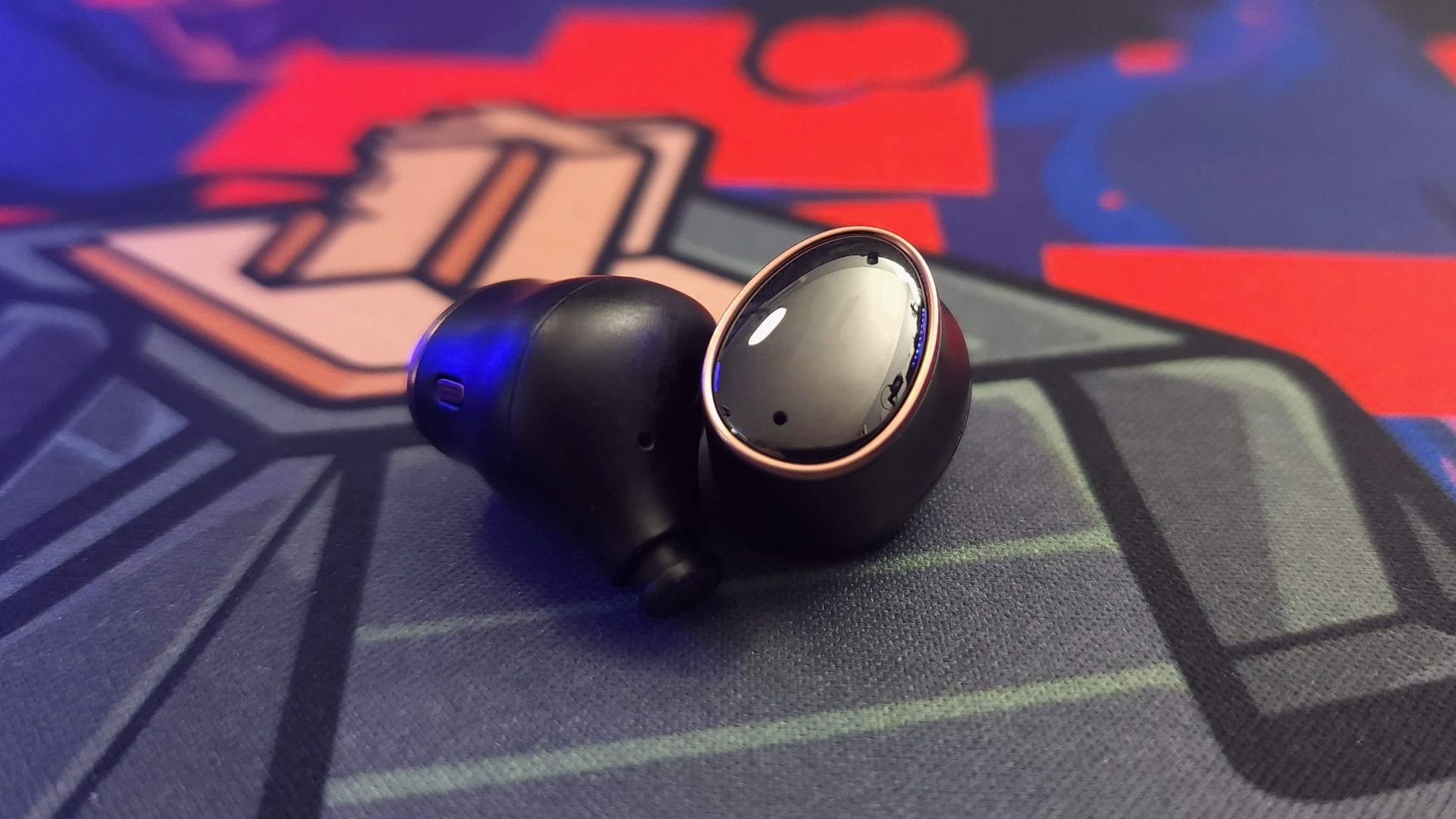 It’s safe to say that the Evo’s are 1More’s best true wireless earphones yet. They offer a great listening experience with solid ANC and advanced features, like SoundID and multipoint Bluetooth connectivity. At $169, they’re cheaper than most of the competition and sacrifice absolutely nothing in sound quality. Nothing is perfect, but the 1More Evo is a solid buy and should be a top contender on any true wireless shopper’s wishlist.