When most of the players in Shadowlands jumped into the game, there was an eagerness to try out the new content and explore the new campaign. With all four zones offering dynamic and fascinating storytelling opportunities, there was much to do. But one of the key questions for games like World of Warcraft is how to to make alting easier. Many of us have alternate characters that want attention. Perhaps it is a desire for a tank to support your guild in mythic dungeons. Or maybe it is a desire to see what the story looks like for the other faction.

In Shadowlands, the offering of four different covenants, each with their own unique storyline and progression arc, makes it appealing to have several alternate characters to experience all of the content. But leveling can get tedious, particularly if a player has to run through the same series of quests over and over again.

Blizzard has, in the past, offered ways to ‘cheat’ the leveling grind. Invasions in Legion and BFA contributed quick boosts to be done in exchange for a series of world quests. But for Shadowlands, Blizzard decided to try something new. The ‘Threads of Fate’ leveling system was announced as an alternative at Blizzcon 2019. But how does it work?

How to get Threads of Fate

A new alt will have to complete the preliminary Maw storyline's entirety before they are given access to the new system. This will feel tedious, but the initial Maw storyline is relatively straightforward and easy to complete. Upon arriving at the hub city of Oribos, a new NPC named Fatescribe Roh-Tahl will approach your character and offer the choice of:

Upon choosing Threads of Fate, players are then offered access to four questlines, which will take them through all four zones. There, the players will be encouraged to level through particular zones. Their progress in the said zone will fill up a bar that will eventually get the player more potent weapons, almost one-third of a level in XP and Renown.

The Threads of Fate Experience

Like many systems, the value is in the eye of the beholder. Threads of Fate is a flexible system in that it allows the players to pursue whatever arc they desire. If someone wanted to level from 50 to 60 with only pet battles, Threads of Fate allows that. If they only wish to focus on dungeons, that is also viable. The content itself will shift and change with each new World Quest, allowing players to change their content/leveling experience with time.

As players level through each zone, they will receive both anima and renown; currencies typically saved until the end-game. In our testing, we were only able to acquire less than 300 anima in total, a minuscule amount compared to the amounts required throughout the game's remainder. The renown is a pleasant addition. It allowed us, the player, to progress through the early stages of the covenant campaign reasonably quickly.

The one major flaw with Threads of Fate is that it does not expedite the leveling process. The contribution of zone quests to the overarching zone questline will vary.  Wowhead calculated that each activity was valued as follows:

Due to the shifting nature of quests and objectives, it can be challenging to streamline the process. Players have reported that leveling through Threads of Fate takes between 6-12 hours, depending on the choice of objectives.

Through our own testing of the system, we could get through all four of the zones within a relative 11-12 hour period with little difficulty. However, completing all four of the zones on level 59. It is possible to accelerate this by using War Mode, which currently provides 10 percent bonus XP to Horde and 30 percent bonus XP to Alliance players. However, this did not completely fill the gap, only leaving BellularGaming near 59.8 levels.

Players have reported that it is possible to level from 50-60 in 6 hours by teaming up with other players and running dungeons the entire way. While one could theoretically do this through the solo queue, the dungeons' wait times have been noticeably long for DPS players. This also provides minimal gear since heirlooms have not been updated to match SL leveling standards yet. 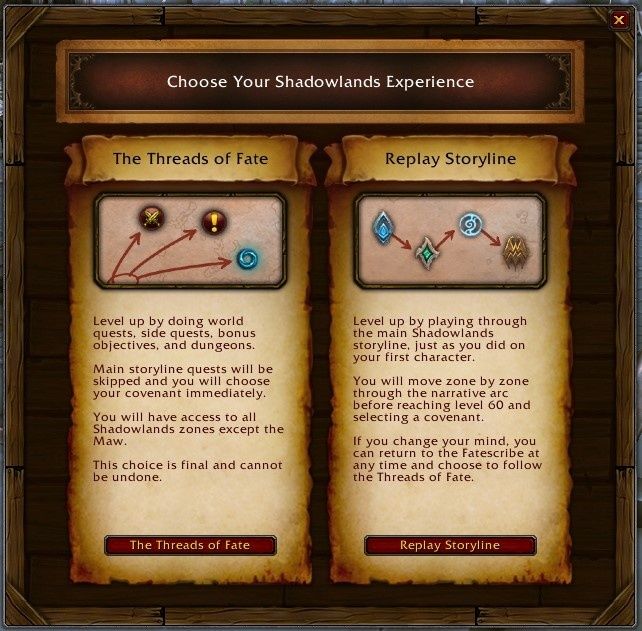 Is Threads of Fate Worth Your Time?

The new system is a nice change to the prior need to level your characters through the same content repeatedly. For players who want to enjoy leveling through content and exploring the questlines they may have skipped in their original run, it is an enjoyable experience that allows players to grind and explore to their heart’s content. It will not severely expedite the leveling process for most players. But the flexibility of the system will offer players some differentiation in the experience that may resemble the end-game. If done properly, it may even give them a slight edge when it comes to things like pursuing Loremaster, grinding out professions, or hunting for collectibles.

Top 5 Tips For Optimizing your Threads of Fate Experience: