10 years of Marvel films have all led up to this point. Avengers: Infinity War releases this week and we’ll finally get to see our favorite heroes in the ultimate showdown vs. Thanos. The fun doesn’t end at the theater, though, as Marvel’s deploying a bunch of Infinity War themed content across its slate of games and this includes Marvel Strike Force.

Thanos has come to Marvel Strike Force as a playable character in the game’s latest update, but getting your hands on the Mad Titan won’t be easy. The update will get you started off with a fairly easy set of Thanos themed missions, giving you anywhere from 60-70 shards when all is said and done. However, those last 30 or so shards you’ll need to acquire to unlock Thanos will have to come from the new Thanos raid and it’s a doozy.

Thankfully the Thanos raid uses its own energy and tickets, so your Alliance won’t have to figure out how to balance both, but you will likely need to communicate more than before if you’re to find any success in the raid.

The reward structure for the Thanos raid is a bit frustrating. Instead of getting Thanos shards directly, you’ll get a certain amount of Infinity Orb fragments depending on how well you and your Alliance do on the raid. Every 2,000 fragments will earn you an orb, which will grant you anywhere from 5-20 shards per pull. Maybe I’ve just had bad luck, but getting the bare minimum of five shards has been my experience so far.

So, what’s the best way to tackle the Thanos raid? Well, I’ve got a few tips for you.

Like the standard raids, you’ll want to map out routes for each individual strike team and you’ll want to take into account how strong each member in the team is when you do this. The Thanos raid nodes are a lot tougher individually than the ones you’ll find in the standard raids, so you don’t want to end up in a situation where you have a weaker player stuck in a path they can’t get through. You can find an example map from my Alliance below: 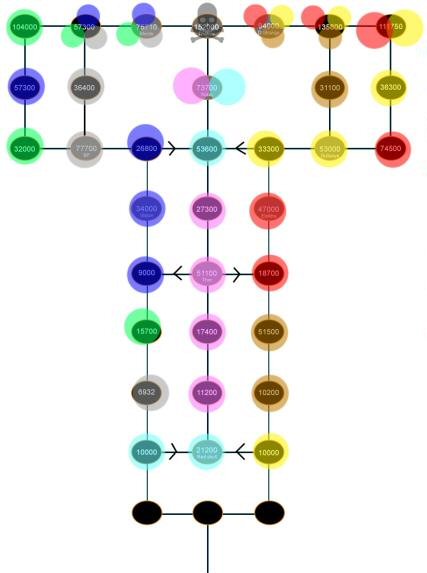 It also pays to know the fights in the Thanos raids, as there are several ways to take advantage of them. For example, there are a number of things you can do to deal with fights including Baron Mordo. Mordo’s ultimate ability, which he’ll fire off on turn one, will heal block your team, so you can deal with this a few ways. You can just opt not to field a team reliant on healing or you can do what I do and throw a trash team at the fight first and let them eat the ultimate and then start the fight over. It’ll cost you an extra 10 energy, sure, but most of you are probably fielding Night Nurse as the backbone of your raid teams, so you’ll likely want to take advantage of her excellent healing for these hard fights.

Another trick you can employ is to bring Hawkeye along (if you’ve got him) to the Thanos fight. Hawkeye’s ultimate ability inflicts Blind on enemies and can be used to make Thanos miss his own ultimate, which makes the fight significantly easier to deal with.

Your Alliance should also know what it can tackle and not try to bite off more than it can chew. My Alliance does the level 35 version of the raid and we aim for 60% (Tier 2) since it’s something we know we can do. We’re in the process in trying to assess whether or not we can hit 100% and do this consistently, but for the moment, 60% is an achievable goal for us and it gives everyone in the Alliance a decent bounty of fragments to put towards Infinity Orbs.

Got any of your own tips for the Thanos raid? Drop ‘em in the comments below!