Getting started in Mount & Blade II: Bannerlord can be a daunting task, but conquest doesn’t need to be all doom and gloom. We’ve provided some guidance on giving your clan a solid start in ancient Calradia – make sure to check out our Getting Started guide below!

This ‘getting started’ guide focuses on single player, as that’s probably where you’ll want to start, given the complexity of the combat systems. The guide is meant to get you through the first major milestone towards rebuilding your clan, but I won’t say too much – I don’t want to spoil it. Bannerlord has a boatload of features and depth worth exploring, so let’s start our adventure with character creation. 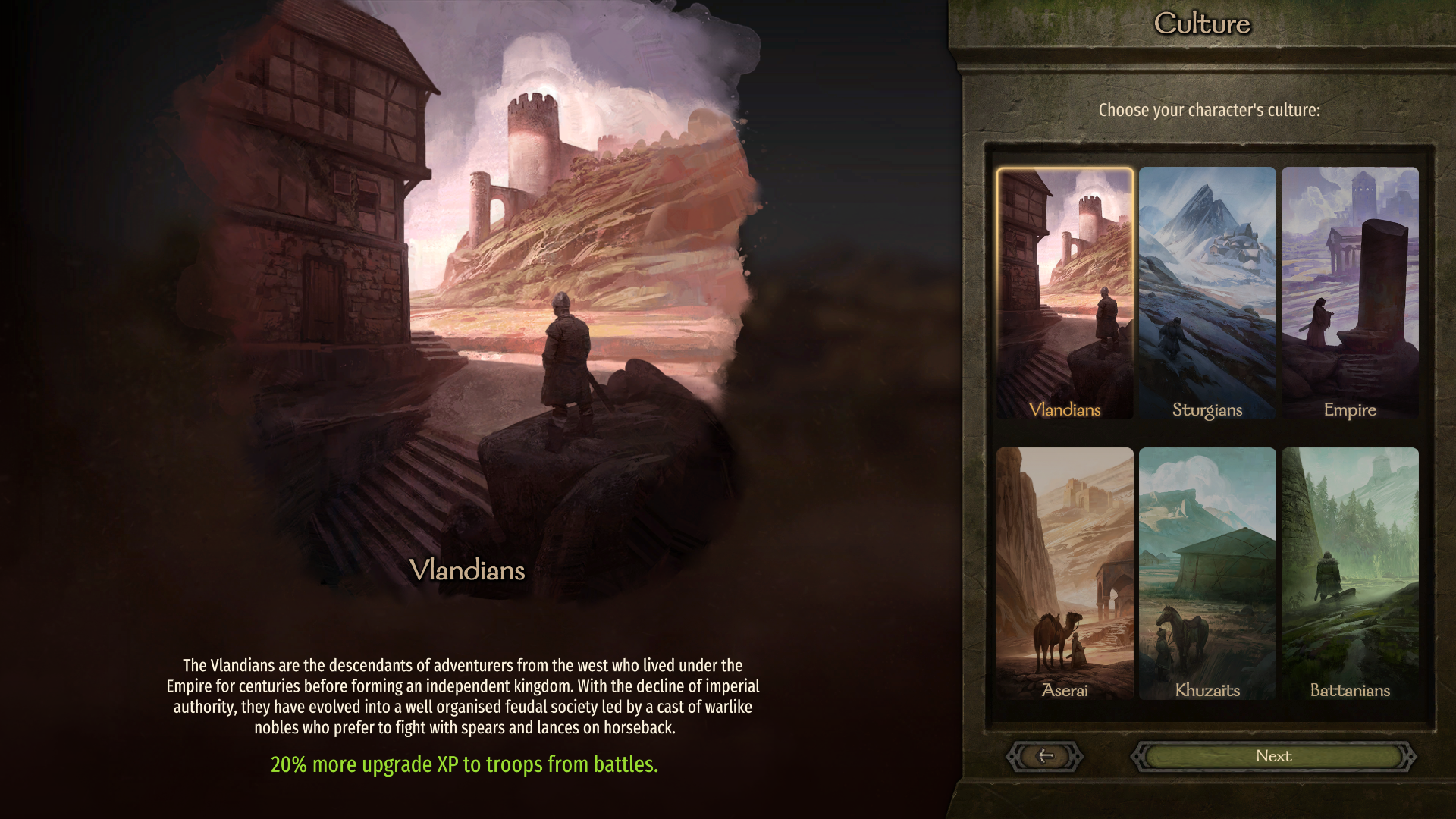 Beginning a new campaign features a choice of which culture from which to originate. As with the previous Mount & Blade installments, choices at character creation are going to influence your stats, but culture stands apart somewhat as the bonuses reach more globally than other background related stat boosts.

Each of the six choices roughly correlates to real-world cultures. I won’t go into detail on each of them in this article, but I will say these options may provide substantial differences in gameplay later on. For example, Sturgians, hailing from the distant north, move faster in snow, whereas the Aserai have bonuses to trade. At the outset, I recommend considering who you want your character to be and how you want their rise to power to look. If you envision yourself taking and maintaining cities, an Empire background may suit you well, whereas leading a roving band of mercenaries would suit the Khuzaits and their improved mounted map speed very well.

Next up is the choice of upbringing – each culture has a bevy of choices for how your avatar made their way in the world up to the present. Fortunately, Bannerlord provides a handy guide on how each choice influences your skills and attributes. Each skill has a tree associated with it, and skill points unlock perks at different training levels. Skill points also make it easier to learn that skill. So, if you plan on building Legolas in this world, you’ll want to select background traits that give Control (the attribute governing archery) and the bow skill. 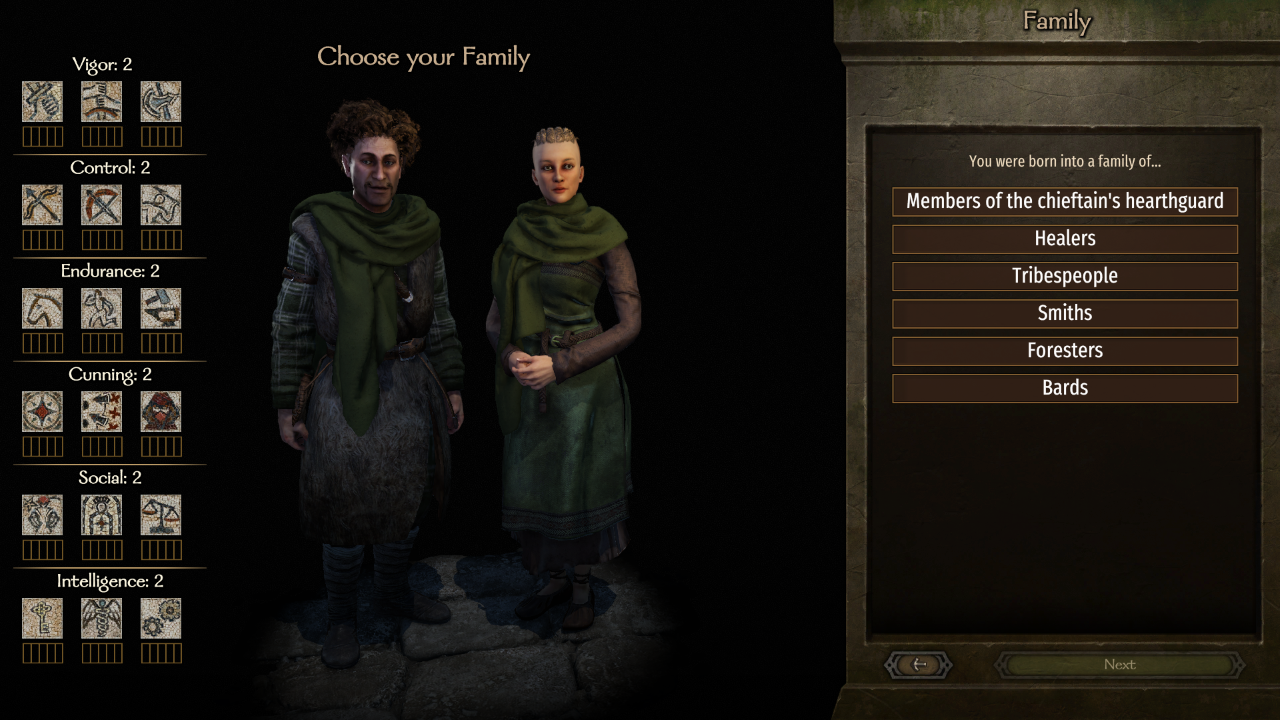 Once you’ve sussed out the details on your character, pick a name and select your difficulty options (e.g., reduced damage for you or your army, immortality for your companions, etc.) and ride out to your destiny.

If this is your first time playing, I highly recommend running through the tutorial. It begins in a training field, which should give you the basics on combat (i.e., attacking and defending from different directions, mounted combat, and ranged combat). The tutorial then entails your avatar and a family member tracking their siblings and the bandits who kidnapped them. I won’t say more about the plot, but this is one of the two campaign hooks Bannerlord provides for those looking for a raison d’etre beyond medieval face punching. A word of warning on the tutorial – the troops you recruit in the tutorial are not the troops you’ll recruit once the tutorial ends. Everyone you recruit in the tutorial are well trained soldiers ready to take on the world. Those you’ll recruit in the main game are generally lucky they didn’t swallow their tongues as children. And you don’t get to keep your tutorial troops, money or other benefits either. Bummer.

Entering the world as a lone adventurer can be daunting. Don’t fret – no matter what background you choose, you’ll start safely nestled in the Empire’s fragmenting bosom. As with real life, you’re going to need money to make it anywhere in the world. You should start with a cool grand to help you out, but that will go faster than you think. There are several options to making money, such as robbing peasants, doing quests, tackling bandit clans, trade, and tournaments. I prefer a mixture of the above, but there’s no reason you can’t cater to your own playstyle.

Trade in Bannerlord is about the same as in any game – buy low and sell high. Typically, the farther from a resource, the more expensive it is in a given town. It’s worth visiting some towns to look for easy profits. I made a few thousand from buying a cheap resource in one town and selling it to its very close neighbor… always keep an eye out for a deal! 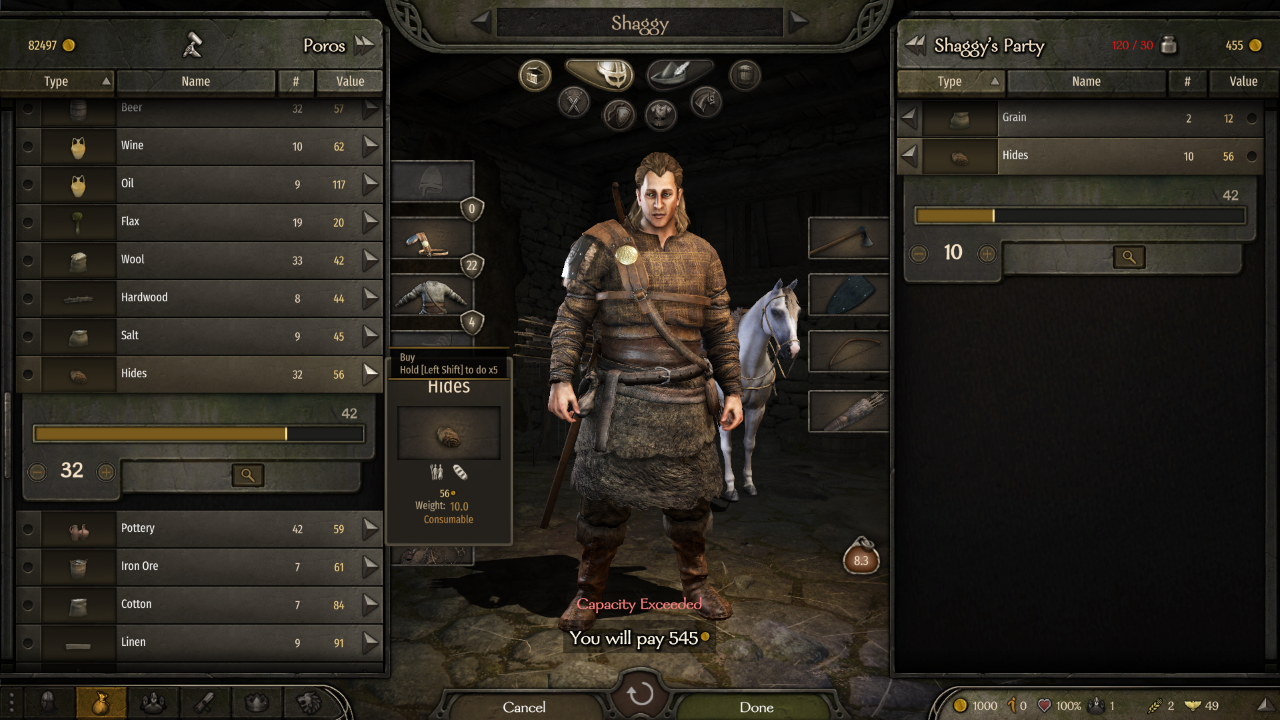 I also recommend the tournament circuit. As there are many more cities in Bannerlord than in prior installments, there are also more opportunities to compete. The rewards are often excellent pieces of equipment or horses, but you can still bet on yourself. This is a good strategy for those who have the combat system down and have invested some points into combat skills and attributes.

Whichever route you take to acquire money, though, you’ll need an army to support you. Recruiting troops to do all of this is more complicated than in previous installments. Each town or village will have only a few troops for recruitment purposes until you increase your influence with the various powers in a village or town. Having more troops and mounts will increase your consumption of food, but also allow you to carry more trade goods at the cost of some coins every day. Also worth noting is that having wounded soldiers will dramatically slow your army down if you don’t have enough troops to carry them, so keeping a sufficient number of troops is essential. 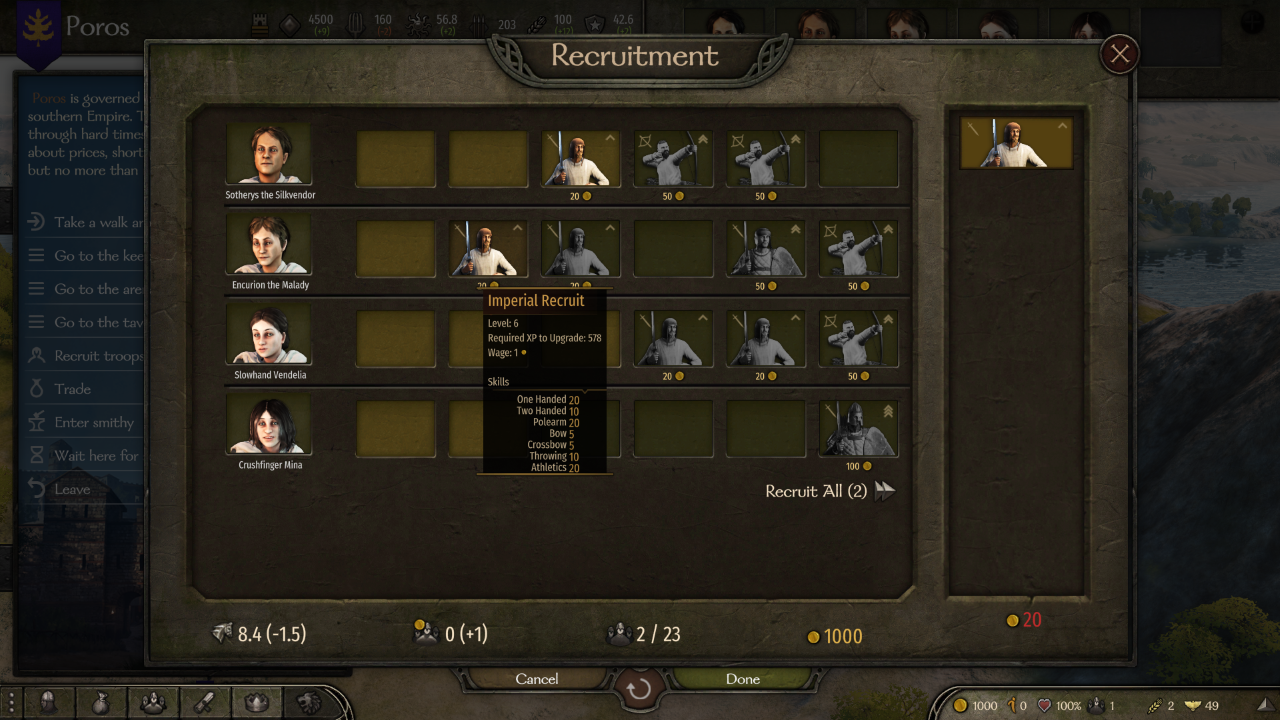 Of course, you can also recruit from the pool of prisoners you have, which can be an effective way to bolster your nascent warband. Either way, your troops at this stage will generally be the lowest of the low. As you fight, your troops will gain experience and level up, which often gives a choice of whether to specialize the troop as a melee or ranged fighter. It’s generally a good idea to have a balanced army – too many ranged and your troops will be mowed down by enemy infantry, and too many melee will lack the early killing power that good ranged can provide.

Finally, you’ll want to acquire some trustworthy companions. You can find them at taverns across the continent, and they will usually join you for a fee. They usually come with a nice assortment of skills, to boot. Going forward, you’ll need these companions to lead caravans or other warbands loyal to you. Companions level up in a similar manner to your avatar and will form the cornerstone of your budding army.

Now go forth and conquer!

Now that you have a handle on acquiring money and troops, you are ready for challenges that are sure to make for a great story. In other words, that’s all for your Getting Started guide. This is a fun sandbox adventure that will take considerable practice and exploration to really master, but this should be enough to prepare you for your epic journey. Make sure to check out Michael Bitton’s Mount & Blade II: Bannerlord tips on MMORPG.com to give you that extra edge in your journey to greatness.