Despite my best attempts, I have never been able to get invested in Zenimax’s The Elder Scrolls Online to any meaningful degree. When I first experienced ESO back in 2014, I recall likening the combat to feeling like “swinging around a pool noodle - with no sense of impact to enemies.” It just felt like Zenimax took a step back from what Bethesda Softworks had built up . Yet nearly every year, I crawl back to ESO and give it another shot. I think, “Maybe this time it’ll click. Maybe now I’ll get invested. Maybe after the latest update it’s improved.” Yet despite having purchased every new expansion, or logging in after every major update (i.e. One Tamriel), it still never grabbed me like it has so many other players around the world. Until now.

Believe in the Heart of the Cards

That is, until the latest expansion High Isle introduced a new card-based minigame: Tales of Tribute. I’m usually a sucker for TCGs in real life, such as Magic: The Gathering, Pokemon, and even Final Fantasy’s own TCG. I also enjoy digital collectible card games, such as Hearthstone and Legends of Runeterra. But my passion has, and always will be, video games - so when a game includes a card-based side activity (Gwent, Triple Triad) you can be sure that I’ll get invested – sometimes to a fault (I still haven’t beaten The Witcher III because I spend all my time playing Gwent instead of progressing the story). Did I purchase the High Isle expansion just to play this new minigame? You bet I did. 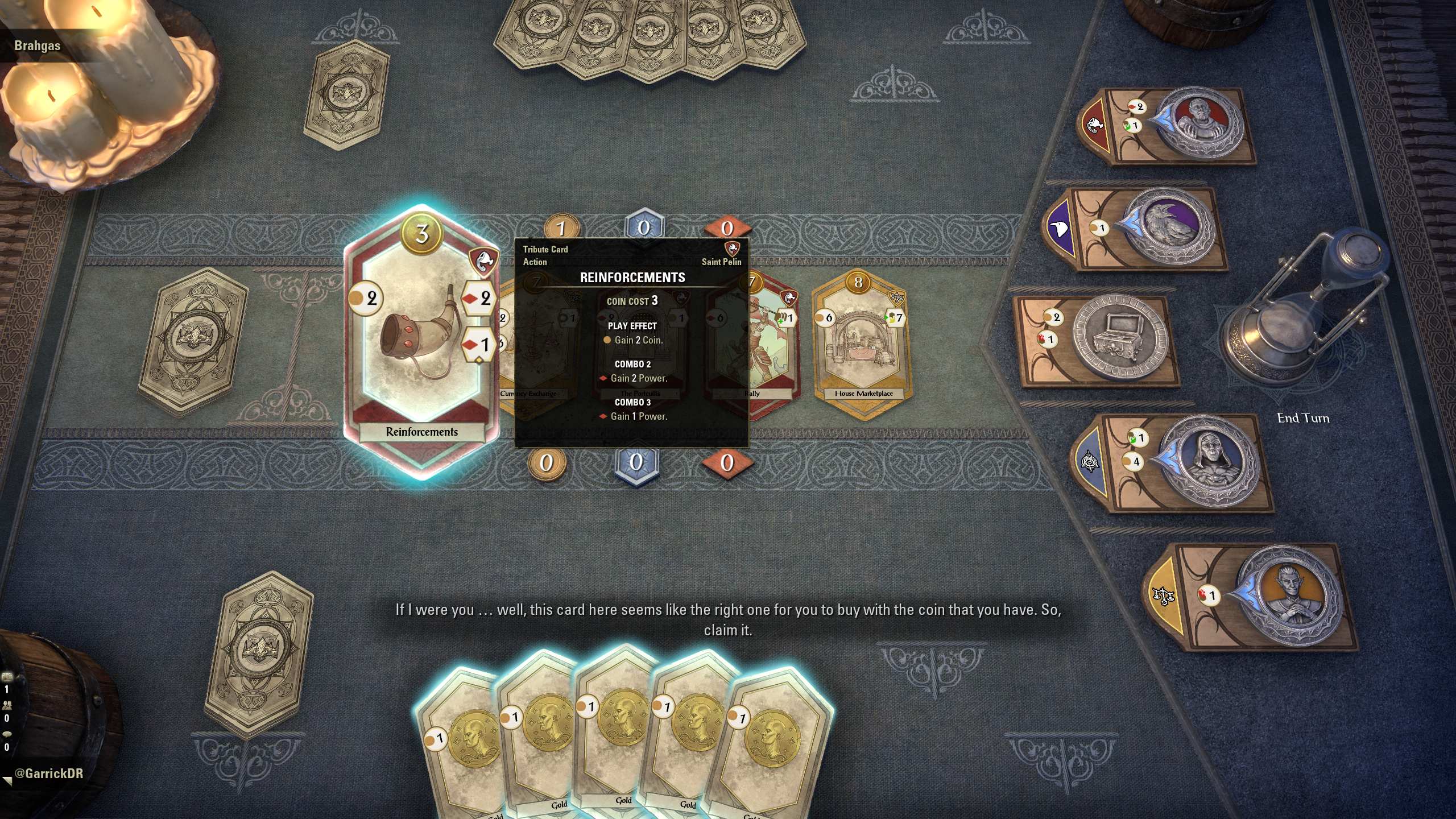 What I did not expect was how much Tales of Tribute (or just Tribute as they often call it in-game) would captivate me with such a relatively simple premise. You see, Tribute is neither a CCG nor TCG since there’s no collecting or trading element to it; it’s just a CG. There’s no new packs to open, or deckbuilding, or theorycrafting to be had here before matches, so if you enjoy that level of meta in your card-games then Tribute might feel lacking. Instead, Tribute feels like a game of Chess in that both players have access to the same “pieces” on the table, but it’s a matter of foresight and planning (and a little luck) that separates the novices from the experts.

A Tale of Two Tributes

The way that Tales of Tribute starts is each player has the exact same small starting deck of cards. Using those cards, you can gain gold each turn to buy cards from the center of the table called the Tavern. These cards come from a universal deck, determined by which two patrons each player chose at the beginning (more on patrons later). In this way, players begin customizing their decks by adding cards from the center area and shuffling them into their own deck. In order to win, one player must either accrue at least 40 Prestige during the course of the match - and keep it more than their opponent’s by the next turn - or by gaining the favor of each of the four patrons.

Each turn is an exercise in resource management between balancing gold and Power, with the ultimate goal being to increase your Prestige. Prestige is earned by converting ‘Power’ at the end of each turn, although a few exceptions allow you to build up Prestige directly such as using a patron’s ability. It’s an effort in maximizing the amount of resources you can generate so as to have the most options available for your turn, whether it is for acquiring more cards or by leveraging the abilities of the patrons.  Each of the four patrons chosen for a match have a unique ability that can be used at the cost of a resource. Case in point, the patron Saint Pelin’s ability is to move an agent card from your discard pile to the top of your deck at the expense of using up two Power for that turn. 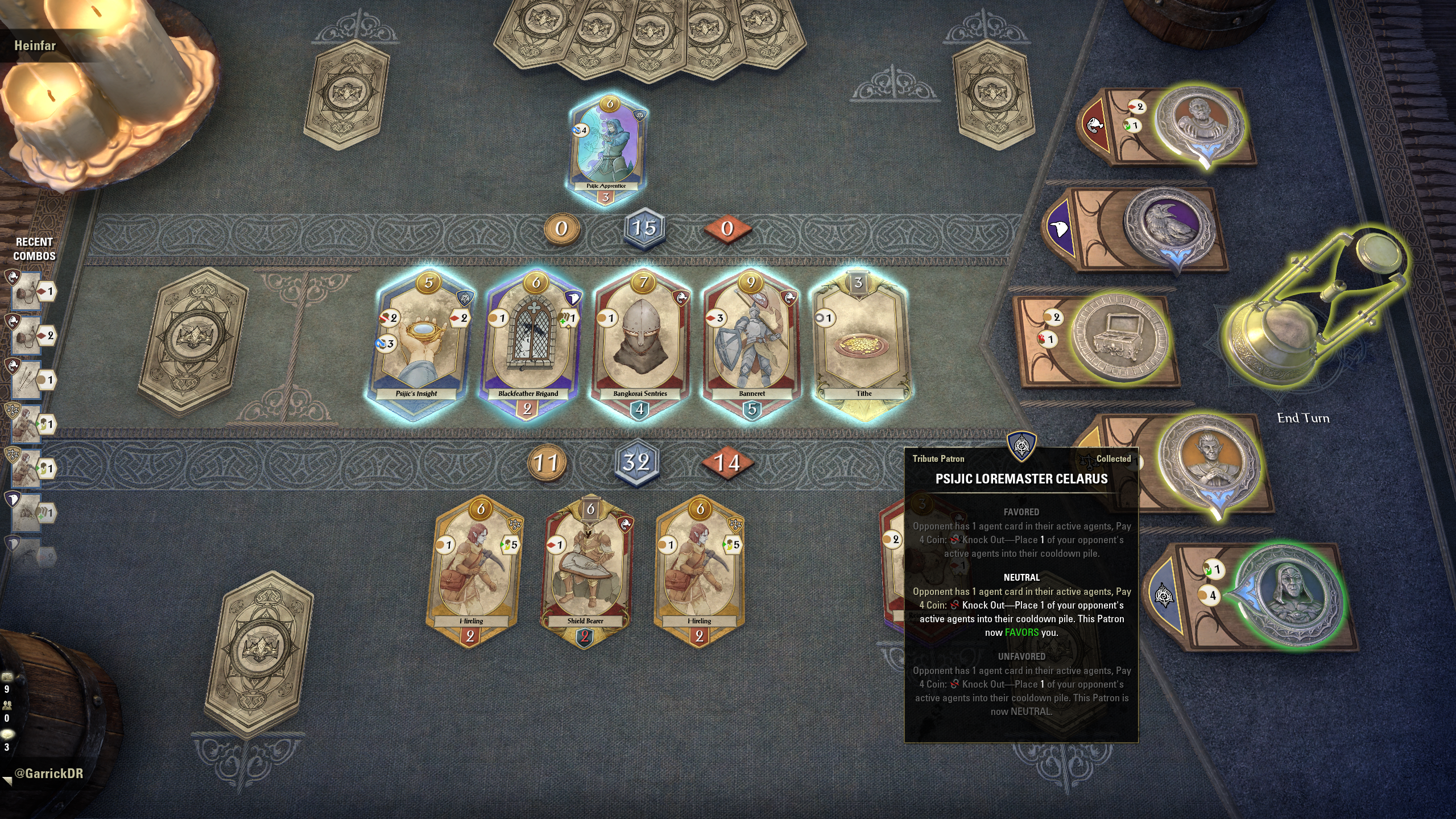 The patrons are Tales of Tribute’s version of mana types (a la Magic: The Gathering) with each ‘color’ corresponding to a specific playstyle or tactic. For example, the Duke of Crows patron and its cards are distinguished by the color purple. These purple cards combo well together in letting players draw more cards. For instance, instead of the paltry starting hand of only five cards I’ve been able to achieve having a dozen cards in a single turn. Similarly, the Psijic Loremaster Celarus patron and his cards’ abilities let players scry and even re-organize the first few cards of their deck, letting you set up combos for the next turn. These are only two of the four patrons each player starts out with, and there are four more patrons to acquire in-game via quest rewards or by collecting fragments from several bosses in the new zone.

Playing against Tales of Tribute NPCs, which can be found in almost every city’s tavern, is a great way to gain familiarity with the cards and the systems when first starting out. Especially when going against the Novice NPCs, which I noticed only rarely ever used the patrons during matches. In fact, in the 30-something matches I’ve played against NPCs only one has ever utilized a patron. Most of my wins against NPCs are by gaining the favor of all four patrons which is a lot faster than trying to amass 40 Prestige points, but I felt like this did hinder my playstyle when going against other players. In each PvP Tribute match, the victor was always who gained Prestige first and never via the patrons, although most other players I encountered still put the pressure on anyways just in case.

Laying down pressure is about as intense as the “combat” in Tales of Tribute gets. There are agent cards which act as your in-play “creatures”(to compare it to MTG again) but they don’t really fight or attack outright. Instead, these agents can be used or “tapped” like an extra card in your hand in order to build combos of same-color (same-patron?) cards that yield extra benefits, such as gaining more Power or earning extra gold. This takes the hostility out of pitting agents against agents and more-so behaves like an additional resource for making the best strategic plays for your turn. Sometimes I would play an agent card just to sacrifice it in order to quickly build up Prestige, or other times as a type of wall to coerce my opponent into spending their own resources in order to remove it from play - which it seemed like most players did prioritize rather than letting my agents remain in-play for any duration. 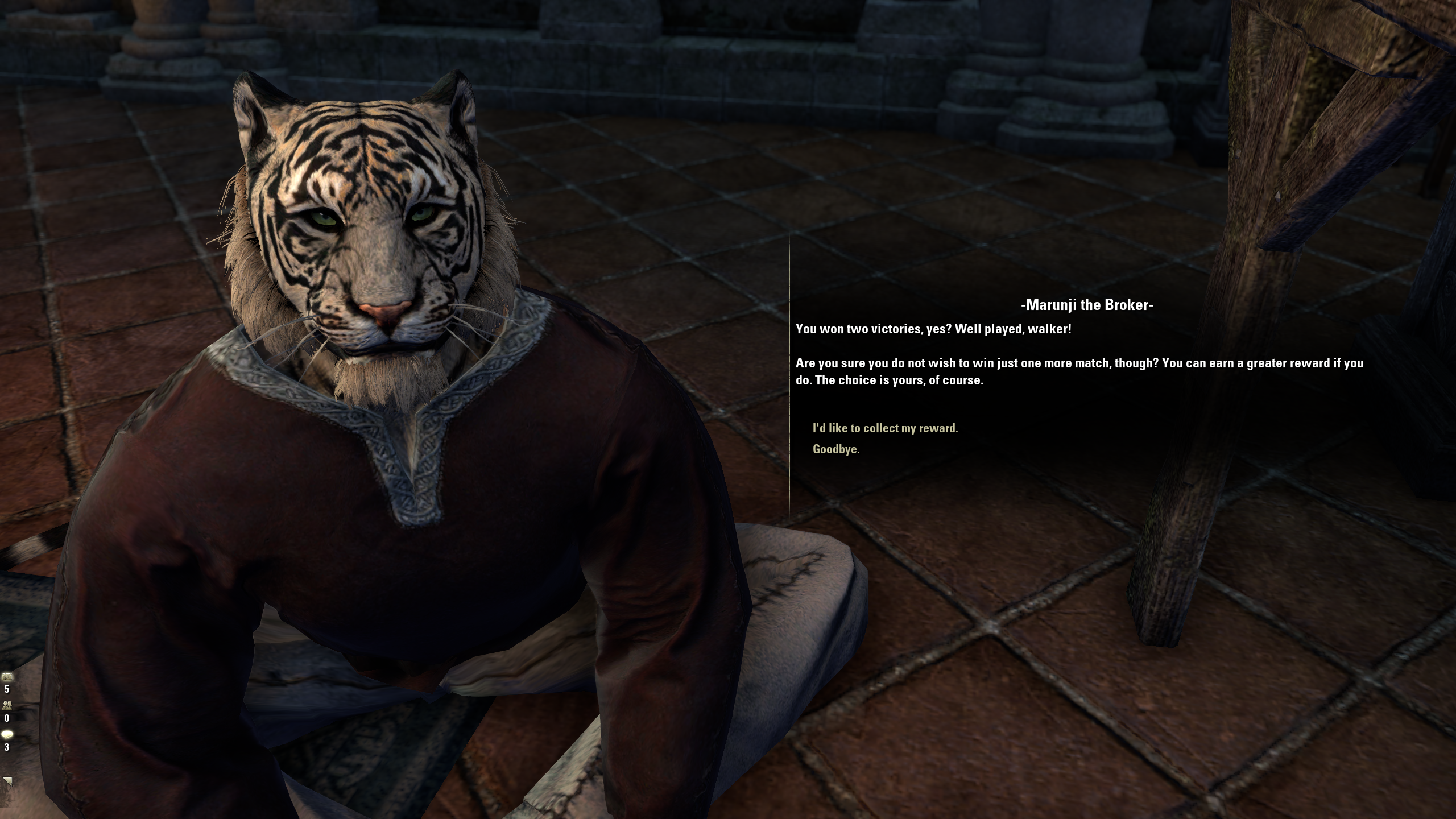 Another Daily, Just in Time

Alas, it wouldn’t be an MMORPG without Dailies to complete, now would it? And ESO’s Tales of Tribute is no exception: each day players can pick up new daily quests to defeat up to three other players, or to scour Tamriel’s taverns in search of NPCs to destroy, er, I mean, to play against. You can turn in each daily after only having won against one opponent but the rewards aren’t as great as if you did all three. Each win in Tales of Tribute gives a little Tribute rank experience, which will let you play against harder NPCs, as well as a bag with random items inside (including gold, crafting materials, and recipes). It’s nothing to aim for specifically as part of endgame or anything, but it was nice getting new crafting recipes from just playing a side activity in ESO.

What I appreciate most about Tales of Tribute is that players are given an even playing field each match. It’s not a matter of who built the better deck or who had more money to throw at getting specific game-changing cards (looking at you Liliana of the Veil) but rather who can make the better plays each turn to make the most out of the hand they’re dealt. I like that each match feels like I’m building a new deck and I can adjust my playstyle to match how my opponent plays. It takes theorycrafting and puts it into practice where you can see immediate results as to how a new strategy or combination of cards might gain the upper-hand. ESO handles this well by offering not only Player vs Player matchmaking but by including a range of NPCs to play against as well. 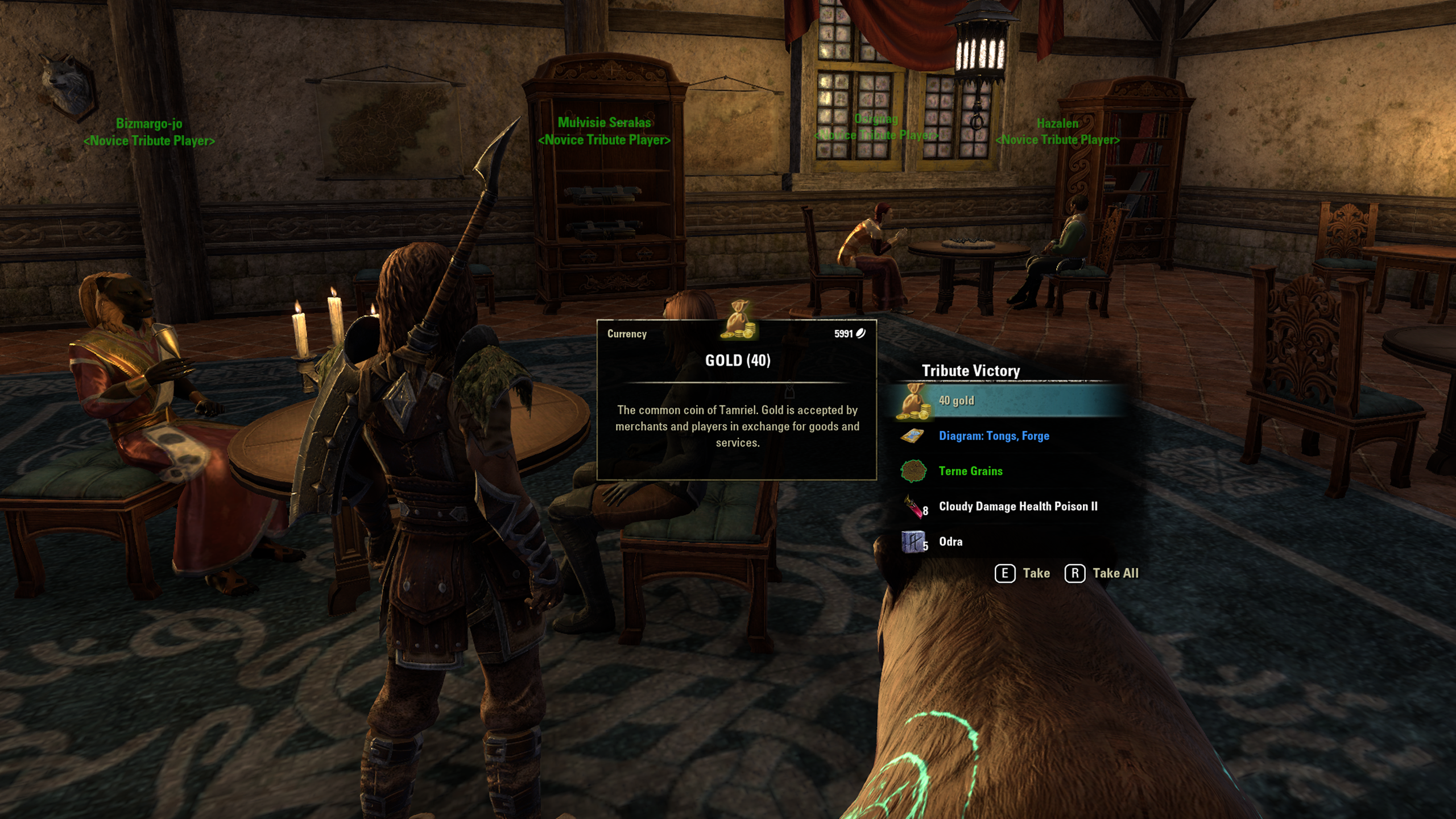 Play for the Love of the Game

Unfortunately, outside of the love for the card game, there isn’t much incentive to invest heavily into Tales of Tribute. Honestly, if the rewards are your purpose in playing then it most likely won’t be worth your time. Ranking up is slow and there’s not much to gain besides random mats and some gold unless you spend countless hours playing Ranked Competitive matches. Even then only the top 10% and 2% of players at the end of a season – as determined by win rate –  will earn special rewards, such as furnishings for your player housing. There are some achievements to unlock as well as getting transmutation crystals for increasing your Ranked standing, but ultimately the carrot at the end of Tribute’s stick doesn’t look as inviting as I would like.

Fortunately, it’s hard to imagine that Tales of Tribute would go unsupported after now being introduced into the world of Tamriel. You can be sure that in future expansions the team at Zenimax will introduce new patrons and decks to acquire and might even introduce new ways to play – maybe a mobile version? I personally look forward to more rewards for playing Ranked Competitive matches, such as exclusive outfits or pets. For now, there might not be enough to keep me hooked for too long, but I know that with Tales of Tribute I at least have one more reason to log into Elder Scrolls Online from now on. If only just to beat up more Novice card-playing NPCs.