With today being the last day of New World’s preview for those who’ve pre-ordered the game, I took some time to reflect back on these previous two weeks that I finally – finally – got to go hands-on. It’s been a fun ride, and honestly, I think I’ve come out of this preview with a more favorable impression of New World than when before I started. I was more than a little apprehensive regarding how well Amazon would manage this ambitious new MMORPG, especially after the recent bungling of Crucible being moved back to a beta status. The recent secondary delay of New World until Spring of 2021 didn’t exactly give me a confidence boost either.

All that said, I fell in love with New World during these past two weeks. But it took some time for me to start loving it – my first impression wasn’t so favorable until I got to my first town. After which point, the world really started opening up and I was able to tailor my experience more towards things I enjoyed; like crafting and playing the trading post markets. My time would have been more enjoyable though if I had just learned a few things earlier that New World fails to teach you. Here are 7 things that I wish I knew before playing New World.

Any weapon you use gets experience for combat. That means you can fire a musket to pull an enemy and weaken it before it gets to you and finish them off with a hatchet. Both of your weapons will gain equal experience for this, but currently (it is a preview after all) the UI is bugged to only display one weapon as receiving the full amount of experience. Unfortunately, this is not the case – and both weapons will only receive half of the total experience from the enemy.

If you want to quickly level up a certain weapon, then try to exclusively use that weapon. That said, this is a fantastic tactic to use when trying to level up your weapon skills early in the game. Especially for things that aren’t as easy to level up, like the Life Staff, or for weapons that aren’t as powerful and therefore not as efficient for killing enemies and getting experience.

There is a Mount: it’s called the Life Staff

There are unfortunately no mounts in the game, which is one of my biggest criticisms with the current state of New World. However, there is a movement ability that’s available from the Life Staff called ‘Speed of Light’ which is useable every 20 seconds. The ‘Speed of Light’ skill will dart you forward 20 meters, and is the single most efficient way to move quickly between towns (outside of using Azoth to teleport). 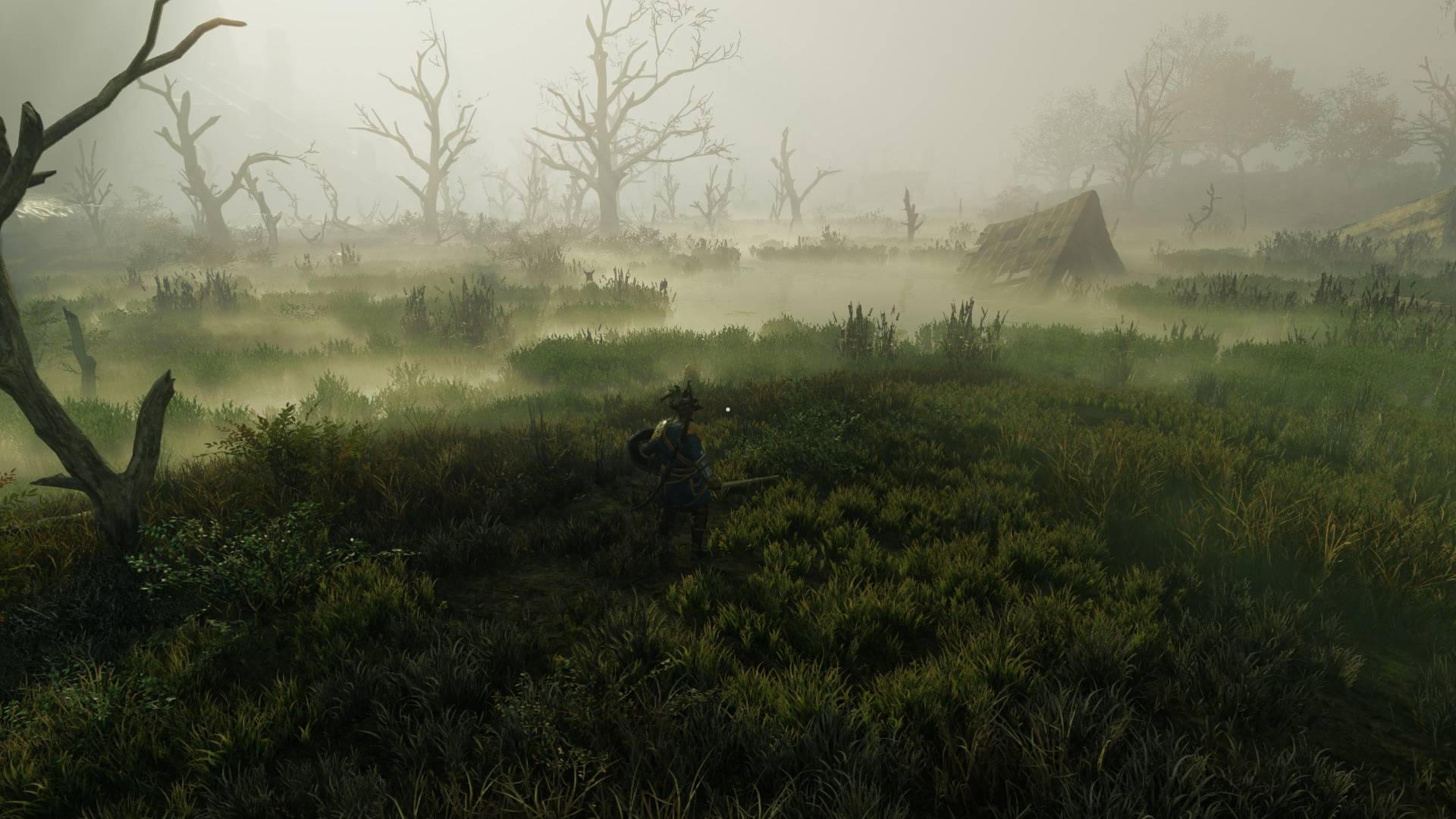 The cooldown can be slightly lessened to 18 seconds with the ‘Refresh’ passive skill, which reduces all cooldowns by 10% with the Life Staff. Additionally, the ‘Speed of Light’ skill can eventually be upgraded to move 40 meters, or twice the initial amount, after investing only two more points into its tree. When you see players zooming by in towns, this is the skill that they are using. Without any mounts in the game, the Life Staff becomes the only viable transportation method for quickly getting from point A to B.

One Gold is Actually a Lot

Unlike other MMORPGs, the currency used in New World is more like real-world currency in that it uses decimal points. One Gold in New World is more like 100 coppers, if you want to think of it in D&D terms. So don’t be fooled when you make it to town and check the trading post - that Iron Ore and Wood that’s being sold for 1 gold each? You’re being ripped off. You can go as low as 0.01 gold, so don’t get scammed early in the game – know your worth!

As soon as you can, craft the Tier 2 version for all of the gathering tools: the Logging Axe, Pickaxe, Sickle, and Skinning Knife. They are cheap to craft, only costing a few iron ingots and coarse leather, and they will almost double how quickly you can gather materials. The higher the gear score, the more efficient at gathering the tool will become. Do yourself a favor and immediately craft these tools to make the beginning hours of New World go by much faster. Unless you’re not interested in crafting in the slightest – in which case, just keep reading on. But every player is capable of learning all of the gathering and crafting skills, so why not give it a try?

Similarly to getting the Tier 2 gathering tools, it is imperative that you next craft the Coarse Leather Adventurer’s Satchel as soon as you are able. It increases your total carrying weight up by another 50kg, which is a significant increase when you’re still in your early levels. This one does take quite a bit more materials to craft – 45 coarse leather, 25 linen, and 10 iron ingots – which shouldn’t take too much time to gather, and is made all the easier with the more efficient tools (see above). You do need to get your Armoring Skill up to level 3 before it’s craftable, however, so craft some apparel at the outfitting station or hammer out some armor at the forge in order to level up this skill.

New World has an entirely player-driven economy, and offers absolutely zero NPC merchants. Therefore, it is imperative that you learn how to utilize the trading post effectively and productively. If you’re looking for a particular item, you can search ‘All Settlements’ by selecting it from a drop-down menu at the top-right of the menu. This will let you find if the item you’re looking for might be available at a neighboring town – and potentially for a cheaper price. What’s a little Azoth to teleport around if it means you save a few hundred Gold? 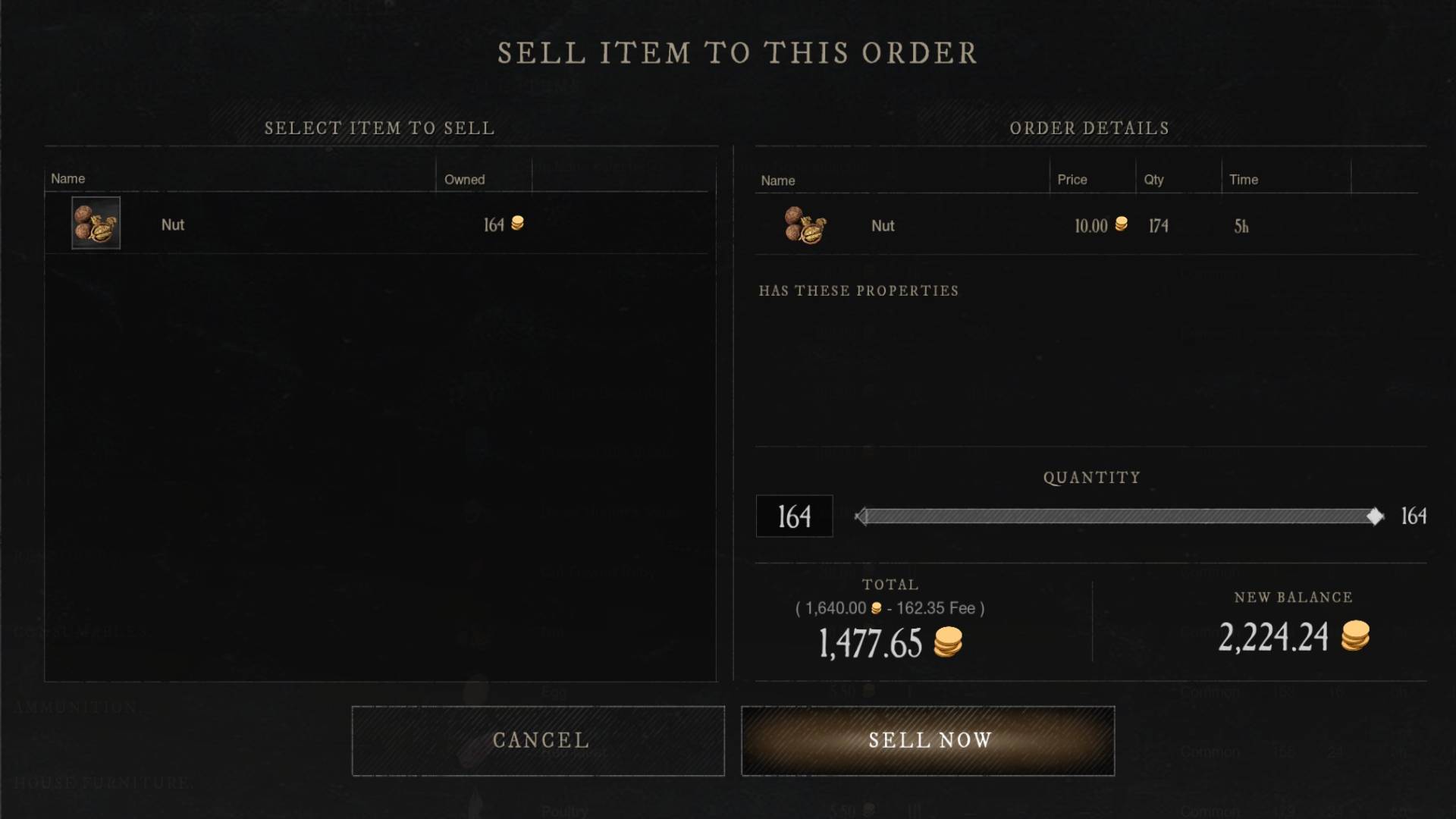 Likewise, you can search Buy Orders that are open in every settlement as well. This lets you check prices for orders that players are willing to buy for items you potentially have. I spent a good chunk of my time in New World playing the trading post by seeing what Buy Orders were going at another town, buying in settlements with cheaper prices that other players and put up for sale, and teleporting to whichever town had the Buy Order at a higher price. This, as an example, let me buy nuts for only 0.10 gold each and be able to resell it for 10 gold each. The mystery still remains though: why did they need nuts so badly?

Unlike in Elder Scrolls Online, the resource nodes do not spawn randomly in New World. Instead, the nodes will always spawn in the exact same spot, much like they do in Final Fantasy XIV. So if you find a location where a lot of Hemp grows (or Silver Ore, or Oil) it will always respawn in the exact same spot after a certain period of time. This can make farming for certain resources both monotonous and efficient, so long as nobody else is also at that farming spot.

Unfortunately, this does have the potential downside of there not being enough crafting nodes after New World officially launches next year. The best example of this is trying to gather Oil in Weaver’s Fen, which does not have nearly enough nodes for all of the players that need it for crafting Tier 3 weapons and equipment. Hopefully this particular issue will get fixed before launch, but go ahead and plan for other players to come up and ninja-mine your silver ore while you’re busy fending off some crazy, corrupted miners.

So there you have it! Seven things that I wish I knew before starting the New World preview. My beginning hours would have gone much smoother if I had realized some of these aspects that the game doesn't teach you - especially the crafting tools and weapon experience share. For more on New World, you can Red's Read on Crafting in New World as well as our Preview of New World's PvP and War combat. Did anyone else also discover some of these aspects? What other things have you discovered that you wish you knew? Sound off in the comments below!